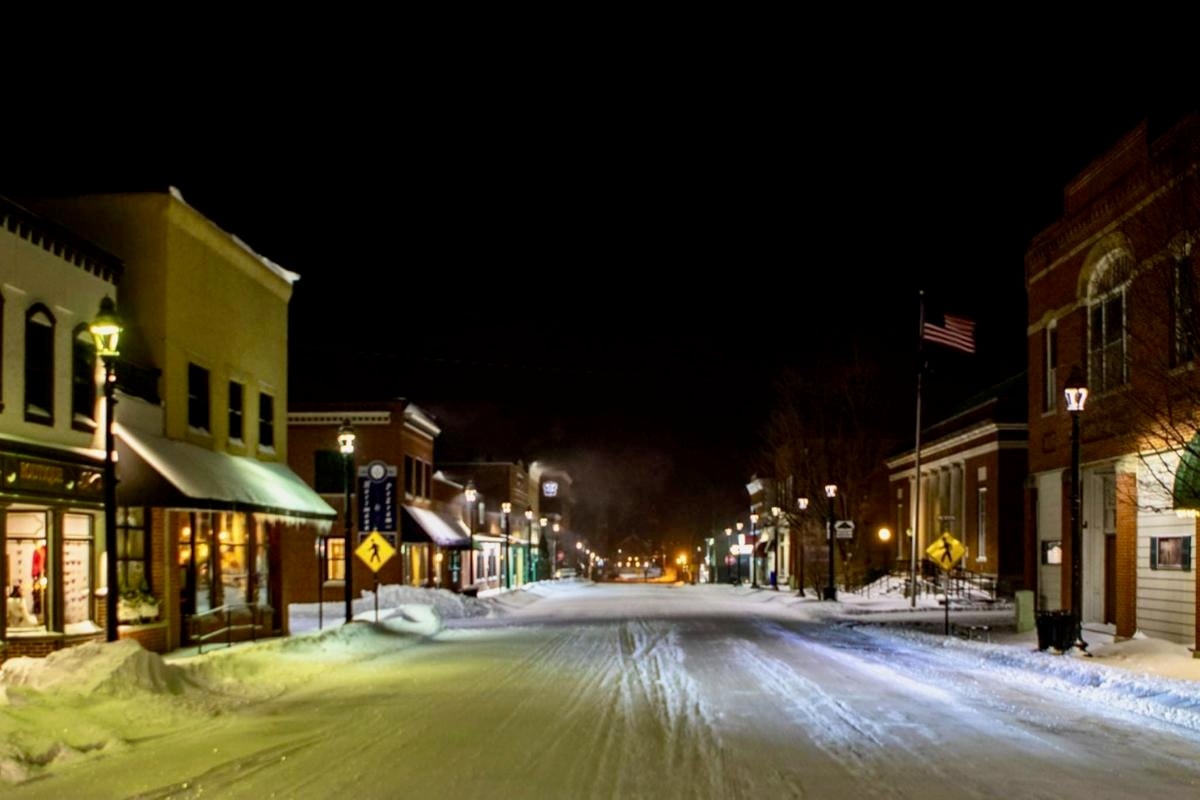 During the Feb. 26 city council meeting, Mayor Larry Forsythe used this quaint photograph of downtown Farmington by a local photographer to serve as an example of why he favored a prohibition on electronic messaging boards in the town's historic district. 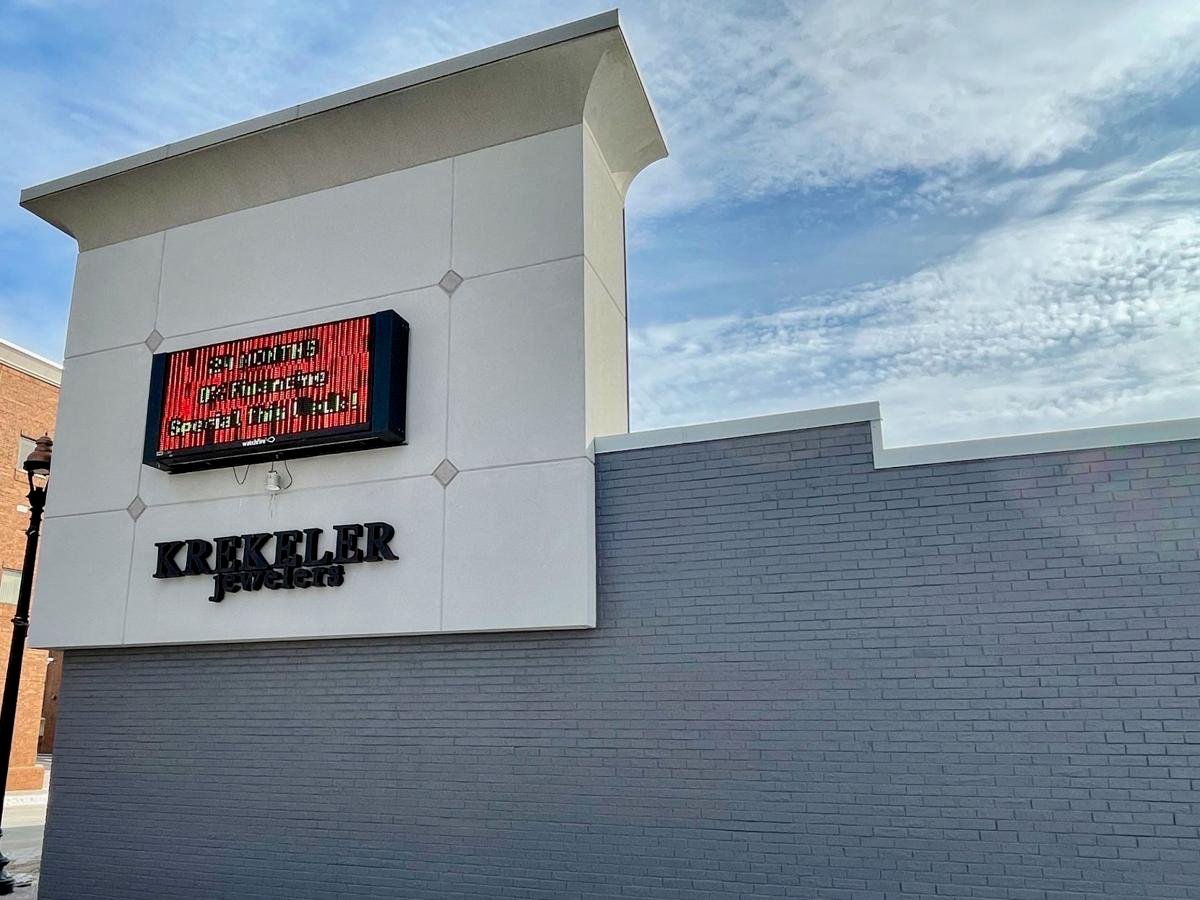 Following a Feb. 22 vote of the Farmington City Council, electronic messaging boards like this one won't be allowed in the city's historic district. 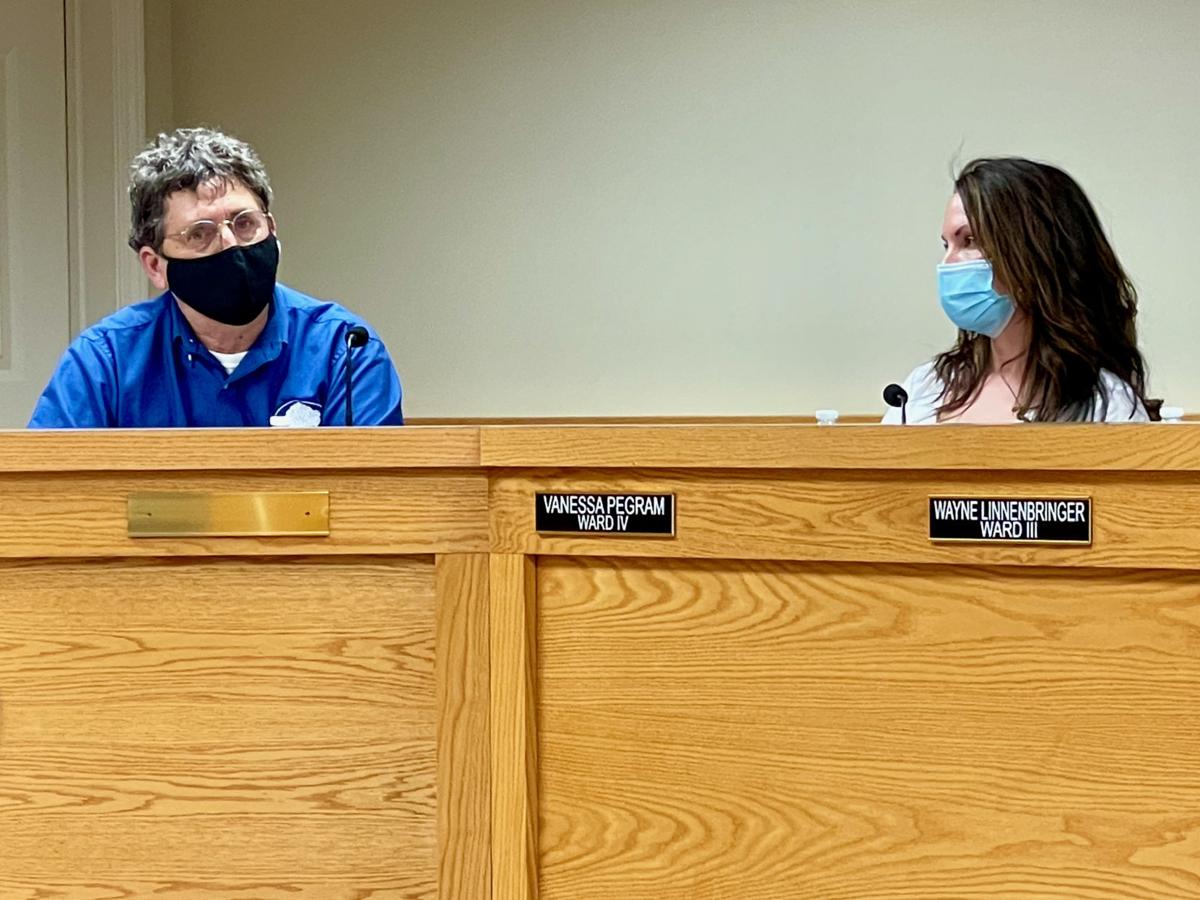 During the Feb. 22 Farmington City Council meeting, Mayor Larry Forsythe offers his opinion on a zoning ordinance change to prohibit electronic messaging signage in the historic district. Looking on as the mayor speaks is Ward 4 Councilor Vanessa Pegram who introduced the legislation.

For the first time in his tenure as Farmington mayor, Larry Forsythe broke a tie vote of the city council Monday night, providing the one vote needed to approve a zoning ordinance change prohibiting the display of electronic messaging boards within the city’s historic district.

Prior to the second reading and vote on the proposed ordinance, the mayor directed the crowd's attention to monitors showing a quaint nighttime photograph of downtown Farmington taken recently by local photographer Aaron Smith.

“This is what downtown to me looks like,” he said. “This is what I think Farmington should stay like, right here. I have been very silent on this subject and I just want you to see this picture that came off Facebook.

"People have enough trouble driving on the highway today without having to try to read something as they’re trying to make a turn, in Farmington especially. So, I’m just in favor of keeping it the way it is. I just want you all to know that.”

Addressing the mayor, City Administrator Greg Beavers said, “It’s a tie, sir. Four to four. You get to vote finally.”

Forsythe responded lightheartedly, “Well, I just said what my vote was, didn’t I? Aye.”

The ordinance revision was the subject of a public hearing held prior to the council’s Feb. 11 meeting at which Development Services Director Time Porter addressed the legislation.

“The historic preservation committee proposed to send to the Planning and Zoning Commission a recommendation to change our zoning ordinances as it pertains to signs to prohibit electronic messaging signs within our defined Farmington Historic District.

“The Farmington Historic Preservation Committee (FHPC) is a mayoral-appointed board that hears cases related to facade improvements, including signage and sign changes within the Farmington Historic District. The Planning and Zoning Commission voted in January to forward it to city council with a favorable recommendation.”

At the invitation of Forsythe, former mayor Mit Landrum provided a brief history of the FHPC and the historic district.

“The city has been involved in downtown improvement," Landrum said. "It goes back to about 1980. The city and the chamber of commerce joined together to do the downtown sidewalks.

"That was a result of a grant the chamber helped the city get. We did that because at the time, Karsch Boulevard was one lane on the west side of town. We figured that once the second lane came in, all the development would move west, and we had to do something to protect the downtown.

According to Landrum, two years after the sidewalks were installed, the prospective builders of the first McDonald’s restaurant toured the town and considered the sidewalks a sign of the progressiveness of Farmington. They decided to put the McDonald’s in Farmington instead of Du Quoin, Illinois.

“When they did that, it triggered the development of Karsch Boulevard,” he said. “All the millions of dollars of sales tax revenue and jobs created out there, it really started because of McDonald’s coming into town. That shows you how the downtown of Farmington has to work for the town. It’s part of the town that’s like a front porch.

"When people are coming into Farmington to look around, like young medical professionals, or somebody, they are going to drive their family downtown, and if there’s weeds growing through the sidewalks and broken plate glass windows and dark storefronts, that spouse is going to look at the other and say, ‘We’re not moving here’. The downtown has worked for us for decades, because we have a really nice downtown.”

After a friend told him about her city having historic downtown buildings painted orange or purple, Landrum decided to form a historic committee.

“The idea was to protect the downtown,” he said. “The idea was not to make it a preservation district. With a preservation district, you pick out a year in time and say, ‘It has to look just like this back then, and we’re not changing anything.’ We discovered early on that it wouldn’t work, because a lot of these buildings had changed their appearance through the years. Which year would you pick that you’re going to preserve?

"For the downtown to work for Farmington, you have to let it live, you have to do some changing. You have to let it participate in the life of the town. What we were trying to do is find that sweet spot between never letting it change and letting it just go garish. It was never intended to be something that would never allow any change to happen downtown. We just wanted the change to be reviewed by some people that had some taste.”

Also addressing the city council at the Feb. 11 public hearing were Steve Sloup, president and CEO of Ozark’s Federal Savings and Loan, and Jeff Krekeler, owner of Krekeler Jewelers.

Sloup said, "Earlier in the year, we went to the historic committee and asked for a digital sign, which we tried to present in a tasteful manner. We were denied that, and we accepted that. That’s part of the process we go through. I looked back at the letter we got saying we were denied. The verbiage was ‘the committee felt that the signage did not fit into the character of downtown.’

"I kept looking at that word ‘felt.’ That’s how you perceive things. That can change. Now we are talking about putting something final into a ruling. When you do that, you take away that opportunity for that perception to change.”

Reiterating his concern about the finality of the ordinance, Sloup continued, "I’m saying, don’t lock it away — it’s a definite no — keep it open. The businesses can come to that committee and make a proposal.”

Krekeler, whose business has an electronic sign attached to a side of the building, said, “It appears our downtown has about 140 years of history. Throughout that 140 years, business owners have had the ability to use the best technology available to locate, advertise and promote their businesses,” he said. “In the early days, that would have been hand-painted wooden signs. When downtown was electrified, there were many lighted marquees with signs that changed into neon.

"When we talked about the desire to keep downtown from looking garish, I can’t imagine it looked more garish than it did in the '50s and '60s when almost every business downtown had a neon sign. That was the best technology at the time and it’s important to realize downtown survived that era. In the '70s, '80s and '90s, the best technology was lighted channel letters and vacuum-formed plastic backlit signs. Not attractive by today’s standards, but it was the best at the time.”

Krekeler expressed his opposition to a unilateral banning of electronic signs in the downtown area.

“Let the FHPC do their job to look at each case individually and work with the business owners to come up with a mutually beneficial solution,” he said.

With Monday night's passage of the ordinance prohibiting electronic message boards, downtown business owners now have fewer options in how they can advertise their products and services.

Californians 16 and up now eligible for vaccine

Fauci, Jordan clash over what it takes to reopen

Fauci, Jordan clash over what it takes to reopen

Karsch gets second name in memory of Dan Peek

Leadington swears in new aldermen, including winner of tie

The winner of the three-way tie between write-in candidates for a Leadington alderman position has been decided.

If you’re in the market for a free historic bridge, you’re in luck. There’s one available in Iron County.

A new mayor and council members were sworn in at the Park Hills City Council meeting Tuesday evening. After inducting the newly-elected city o…

The board of directors overseeing St. Francois County Joint Communications welcomed new members and wished well a couple of members who were leaving.

During their meeting on Monday, the Desloge Board of Aldermen certified last week’s election results and welcomed the three new members and ne…

The University of Missouri Extension gave its quarterly report to the St. Francois County Commission recently.

During their Thursday meeting, the Farmington City Council approved the appointment of Holly Joyce as city attorney, a position that up until …

During the Feb. 26 city council meeting, Mayor Larry Forsythe used this quaint photograph of downtown Farmington by a local photographer to serve as an example of why he favored a prohibition on electronic messaging boards in the town's historic district.

Following a Feb. 22 vote of the Farmington City Council, electronic messaging boards like this one won't be allowed in the city's historic district.

During the Feb. 22 Farmington City Council meeting, Mayor Larry Forsythe offers his opinion on a zoning ordinance change to prohibit electronic messaging signage in the historic district. Looking on as the mayor speaks is Ward 4 Councilor Vanessa Pegram who introduced the legislation.