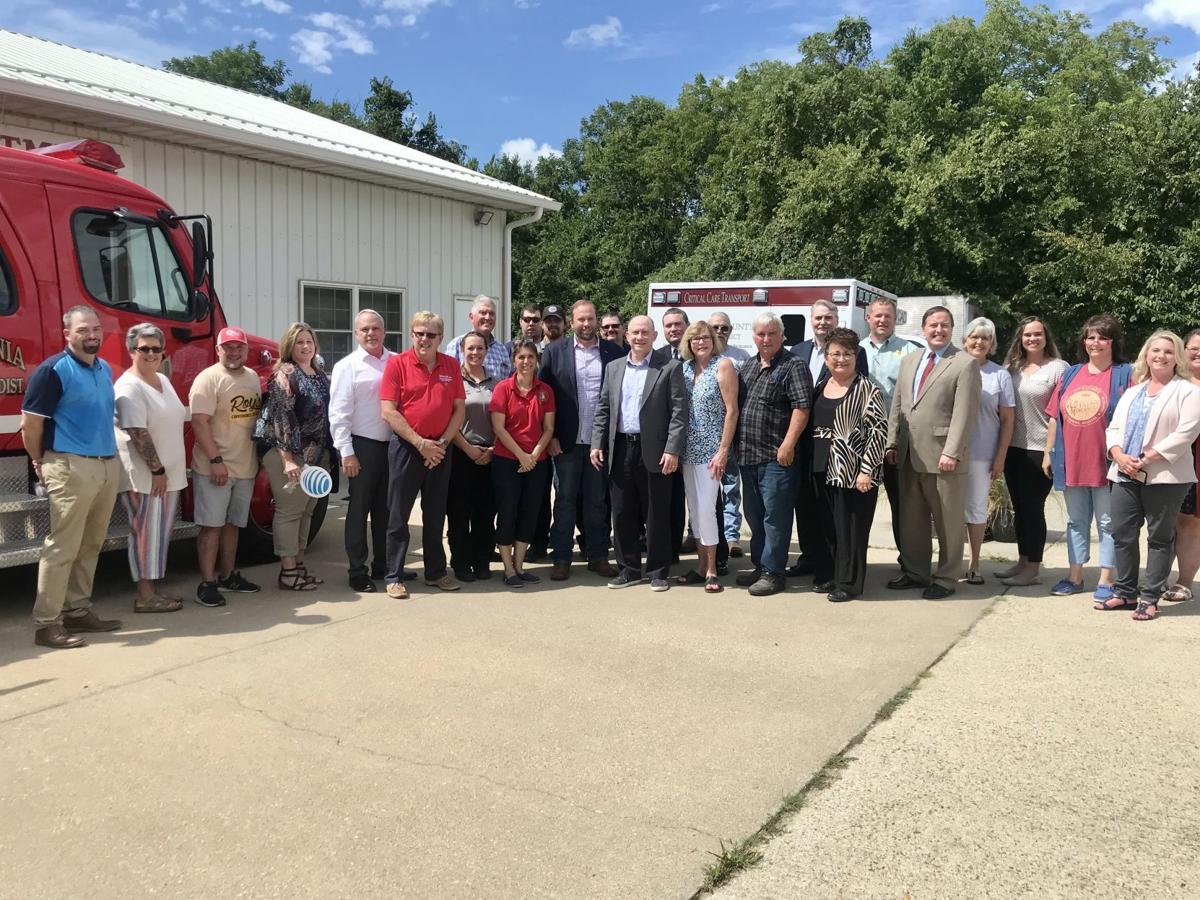 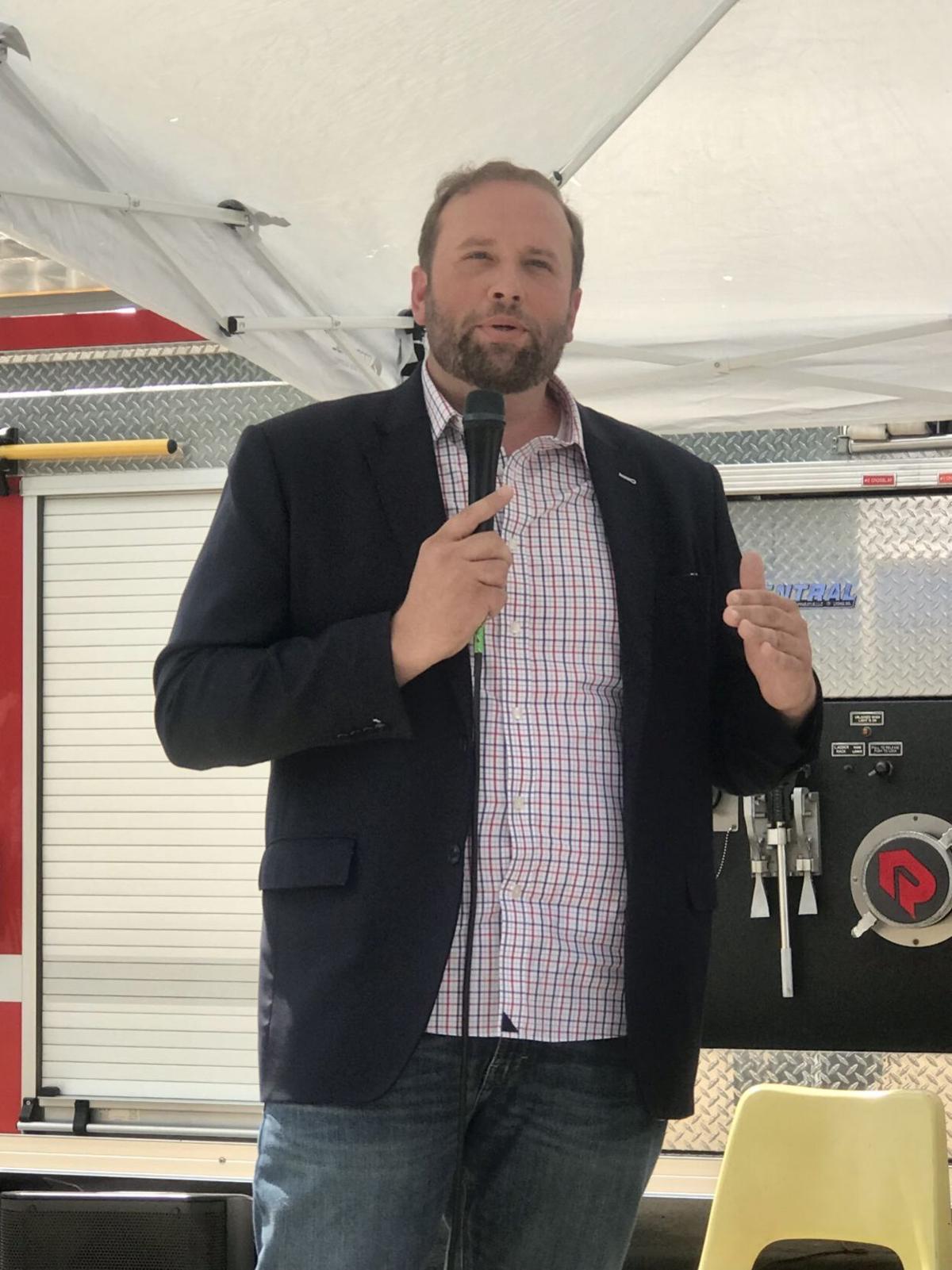 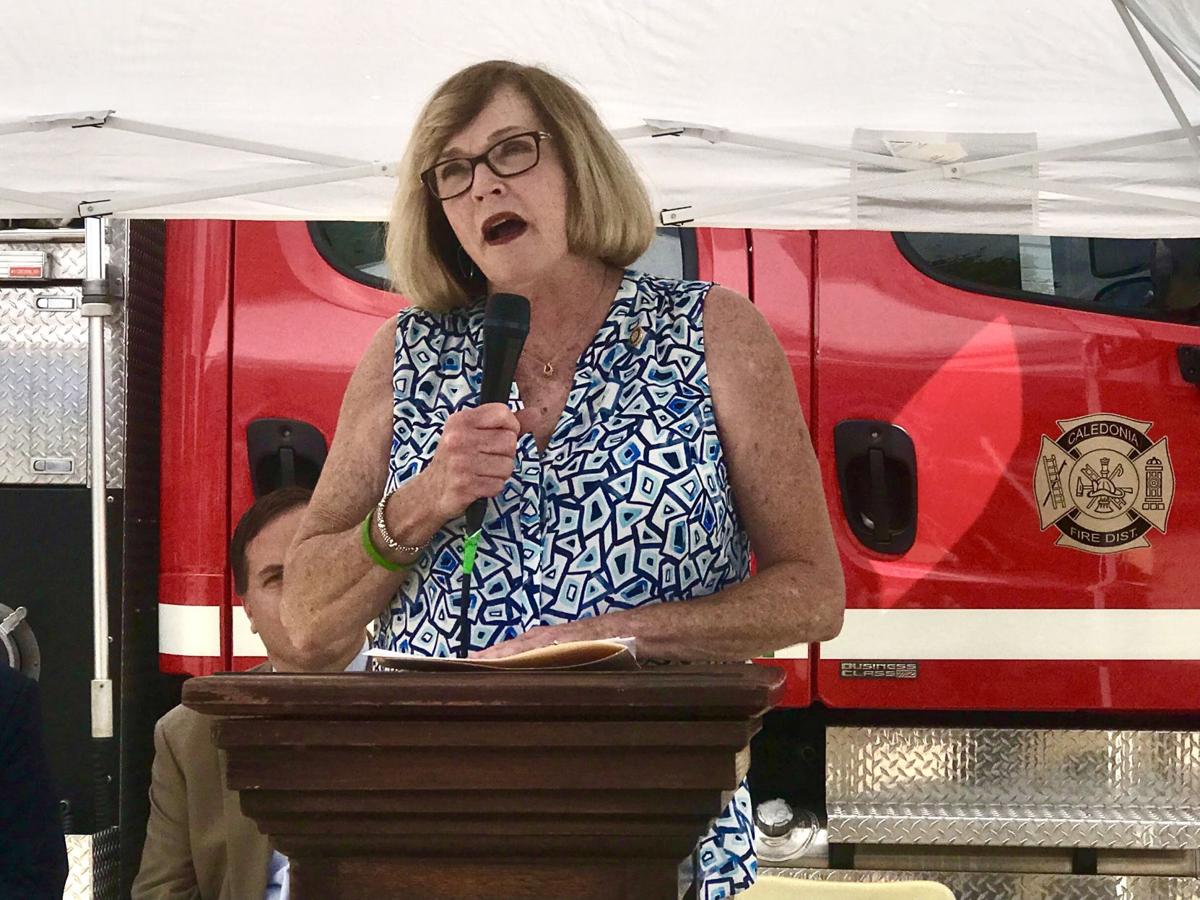 State Sen. Elaine Gannon said she remembered attending a house committee meeting in Perryville years ago to talk about the gaps in cell coverage in Missouri's rural areas. 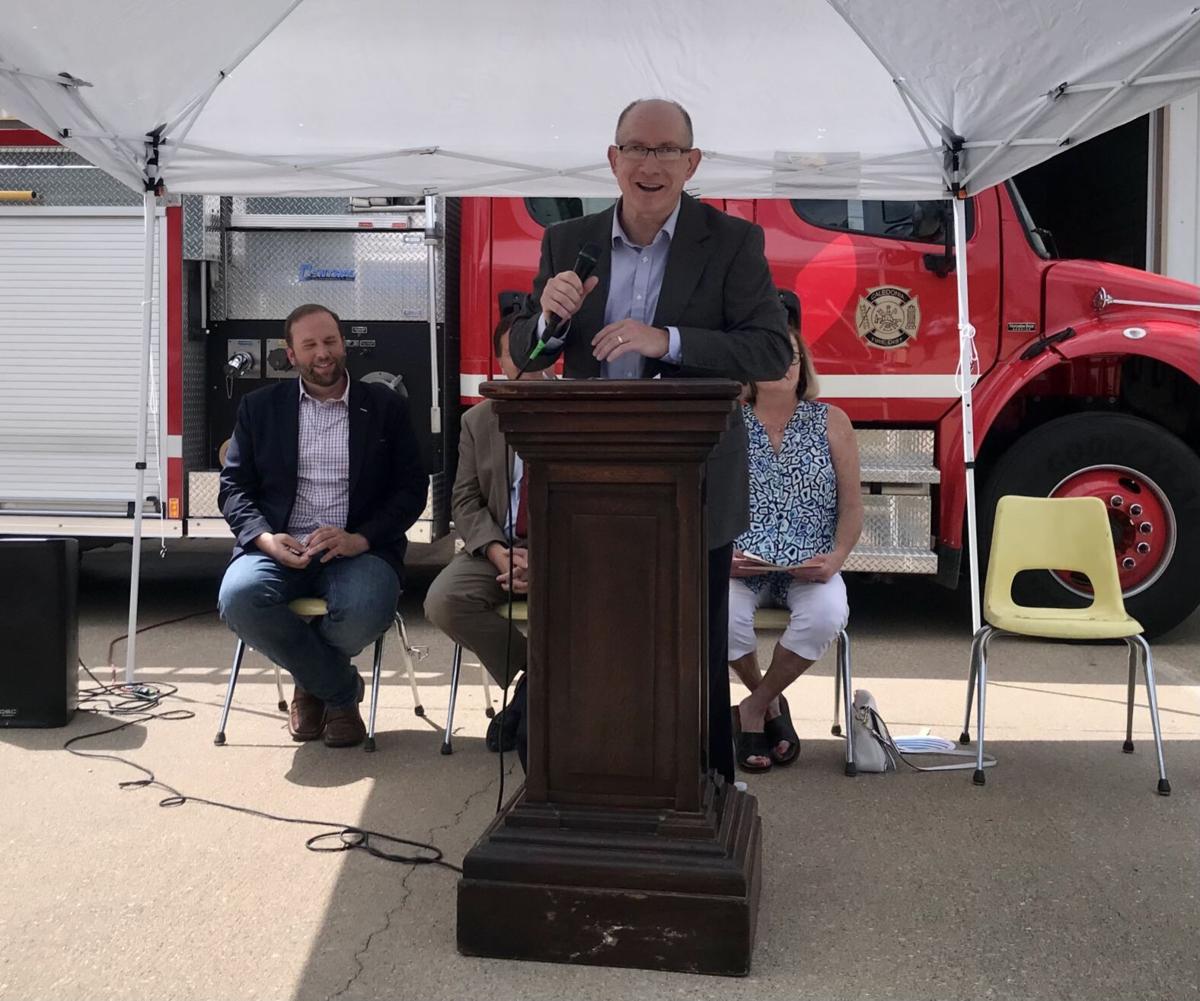 The president of Missouri AT&T, Craig Unruh, said $1.9 billion has been spent in Missouri to build 127 new towers, with 41 build in the 8th Congressional District in the last two years. 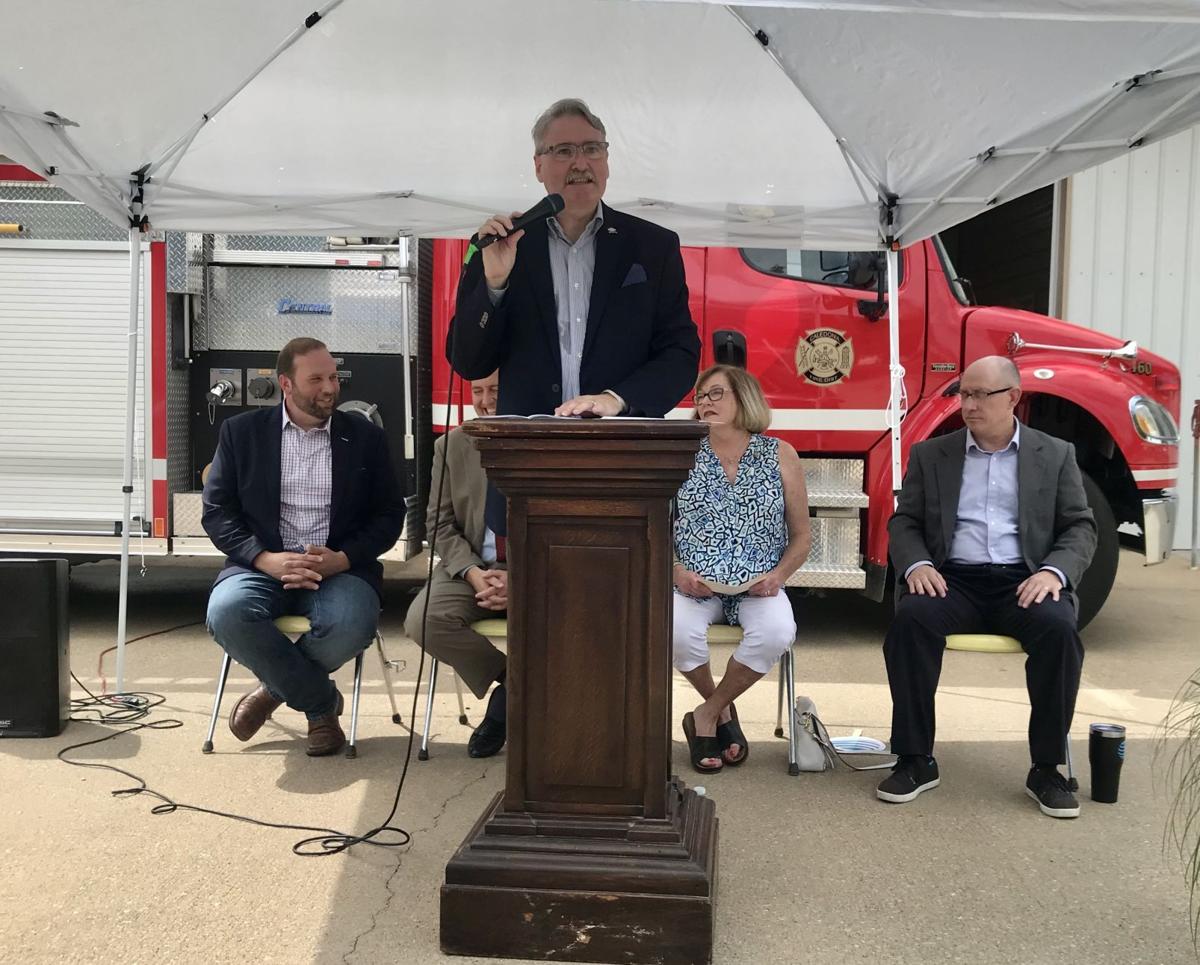 Caledonia Mayor John Robinson III opens the ceremony noting that, while his village has many quaint, historic attractions, its businesses, institutions, residents and tourists rely on good connectivity.

The movers and shakers of U.S. Congressional District 8 were in attendance at Caledonia’s firehouse Monday morning to celebrate the strides made in recent years to improve broadband service to Missouri’s rural areas.

The village’s mayor, John Robinson III, said Caledonia might be known for its rich history, but the day was dedicated to mark 21st century technology by way of the latest AT&T tower.

“Many residents and travelers who come through the village have commented on how good it is to have the cell service and access to connectivity, more so being located in a more rural location,” Robinson said. “It’s good to have dedicated cell phone access.”

Unruh said 50 more cell towers are to be built by the end of the year. The new towers — along with increasing capacity on the existing network and the work being done to boost fiber-based broadband services — requires significant investment. He said during the last three years, his company has invested $1.9 billion in Missouri. Over the past five years, AT&T has invested more than $100 billion across the country to increase broadband service.

“And we're not stopping ... This level of sustained investment is what enabled our broadband network to function so well during the pandemic, as demand increased on our network, demand shifted on our network, as millions and millions of people worked, communicated and entertained themselves from home, and our network performed incredibly well,” Unruh said.

He said 8th U.S. District Congressman Jason Smith and Missouri’s 3rd District Sen. Elaine Gannon, as well as other Missouri representatives in the area, have done much to create public policy encouraging the expansion.

Gannon said she remembers attending a broadband meeting in Perryville hosted by a House committee assigned to research broadband issues in Missouri, especially in rural areas.

“What I discovered, reading all about the issues of broadband and how important it is, is that AT&T is committed to working on this issue across the state of Missouri,” she said. “From connecting family and loved ones to helping first responders during a crisis, AT&T is committing to investing in Missouri to build state of the art infrastructure that will keep people connected. We are helping businesses grow in Missouri and helping to ensure that our customers and communities stay connected throughout the country.”

Gannon said in addition to Caledonia, 10 towers have been built in the last year alone, in towns such as Doniphan, Chaffee, Sullivan, Park Hills, Malden and Cadet.

Missouri Secretary of State Jay Ashcroft introduced Smith as the lead speaker for the day, adding, “I think we've all seen in Washington D.C., congressmen and women who don't get the job done. You guys have to look for that in Washington DC, because your congressman gets it done.”

Smith said quite a few years ago, he met with the former Missouri president of AT&T in St. Louis and shared a map indicating no-service areas throughout the 8th Congressional District

“I actually challenged my entire team, all the way from West Plains, to Rolla, to Farmington, Poplar Bluff and Cape Girardeau to provide the same service in our congressional district that the folks on the East and West Coast have, we should have the same opportunity,” he said.

He said he was assured by AT&T that if the Tax Cut and Jobs Act was passed, the corporation would invest in their infrastructure and in their personnel.

“I can remember standing with President Donald Trump, right at the White House when we were signing the tax cut and jobs bill. And he, off the cuff, said AT&T is giving bonuses to all their employees. And I'm like, ‘I sure hope they are, the president just said that,’” he said. “I was worried that President Trump was just saying some stuff. In fact, he was the one that announced to the world that AT&T was giving bonuses to all their employees.

Still, he said, he continues to do battle to secure more and better access in his district.

“I fight with these people in Washington DC all the time, and they're like, ‘We need 5G.’ I'm like, ‘Folks, we just want a G.’ And I'll tell you we're getting there. And this is something to celebrate and to be excited with.”

Smith said it wasn’t just about private and commercial connectivity, it was about safety, which was fleshed out further by Unruh.

“Of the 41 new towers built in the 8th District, many of them were what we call purpose-built, FirstNet towers,” Unruh said, explaining that FirstNet is a dedicated communications platform for first responders.

“It’s helping them connect to the critical information they need every day, in every emergency. FirstNet is the only nationwide high speed communications broadband network dedicated to and purpose built for America's first responders,” he said. “The recommendation for FirstNet was born from the communication challenges of the 9/11 terrorist attacks. As a result of those communication challenges. The federal government created the FirstNet Authority.”

FirstNet already covers more than 99% of the US population, Unruh said, thanks to the partnership with AT&T. The corporation added more than 100,000 square miles of coverage in 2020, surpassing the initial build commitment with the FirstNet authority.

“When the state of Missouri decided to join FirstNet, we committed to them that we would build 22 new towers in rural Missouri. We beat that commitment ahead of schedule and beyond that commitment, with over 125 new towers we plan to have on air by the end of this year,” he said. “It includes an entire ecosystem of devices and applications specific to meet FirstNet needs. It includes a robust set of deployable assets stored in strategic locations around the country ready to be deployed as needed. Now most of these assets are essentially a wireless tower on a truck. But we're also starting to use drones and blimps to help provide coverage in a rapid situation.”

Unruh said AT&T is only getting started with FirstNet, as more than 17,000 public safety agencies and other public support organizations have signed on.

“We've surpassed two and a half million FirstNet connections and we're still growing. It's really our FirstNet partnership, along with AT&T's focus on improving broadband service dropped Missouri that has resulted in these 56 towers in the congressman's district and we're pleased with how this investment improving broadband for the residents, visitors and businesses throughout Southeast Missouri,” he said. “Our goal is to keep our communities connected, no matter how technology evolves.”

The St. Francois County Commission has approved a request from the Prosecuting Attorney's Office to apply for a Stop Violence Against Women gr… 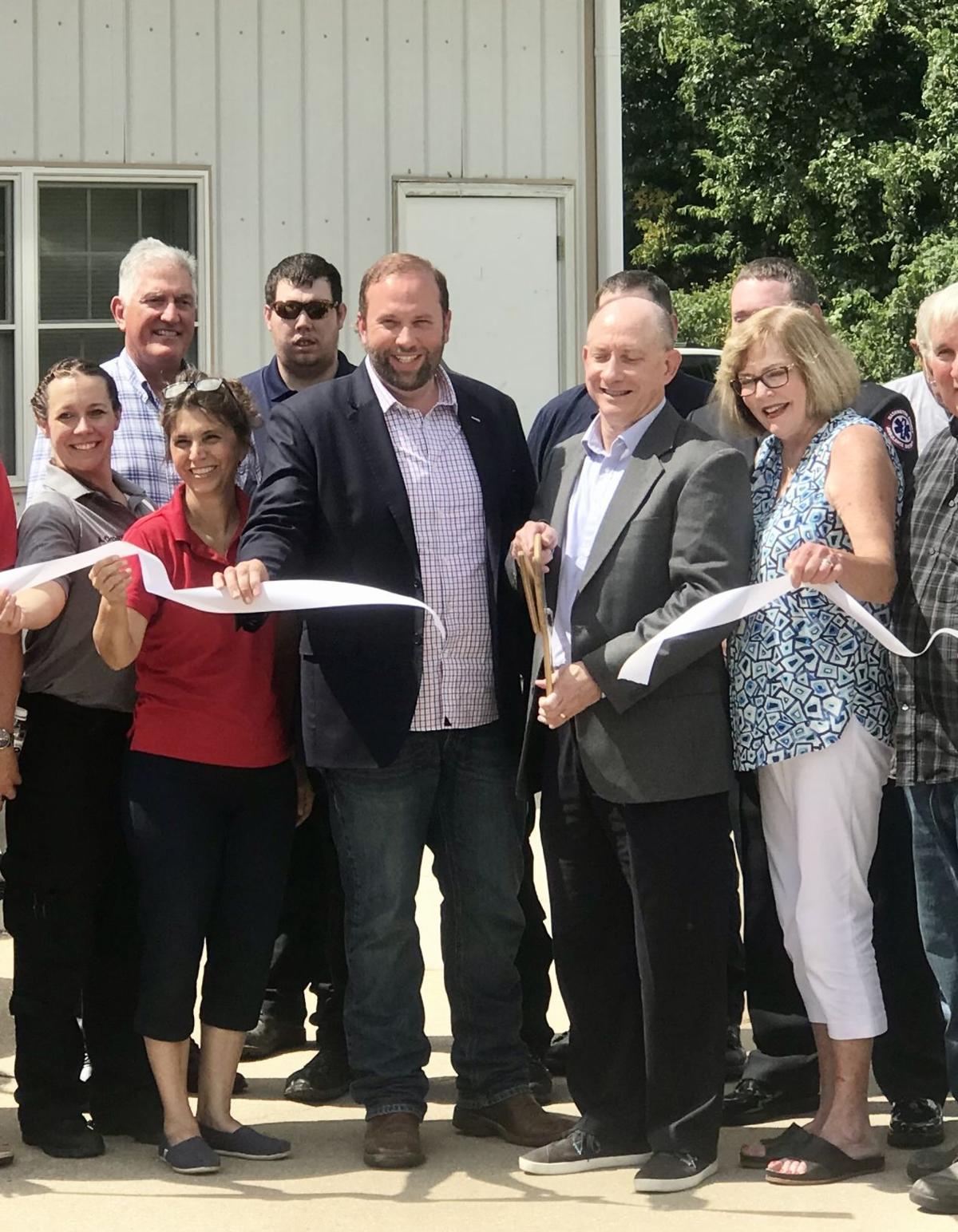 Missouri AT&T President Craig Unruh cuts through the ribbon, with U.S. Congressman Jason Smith on his right and Missouri Sen. Elaine Gannon on his left, signifying the expansion of broadband in the rural areas of the 8th Congressional District on Monday morning at the Caledonia Firehouse. 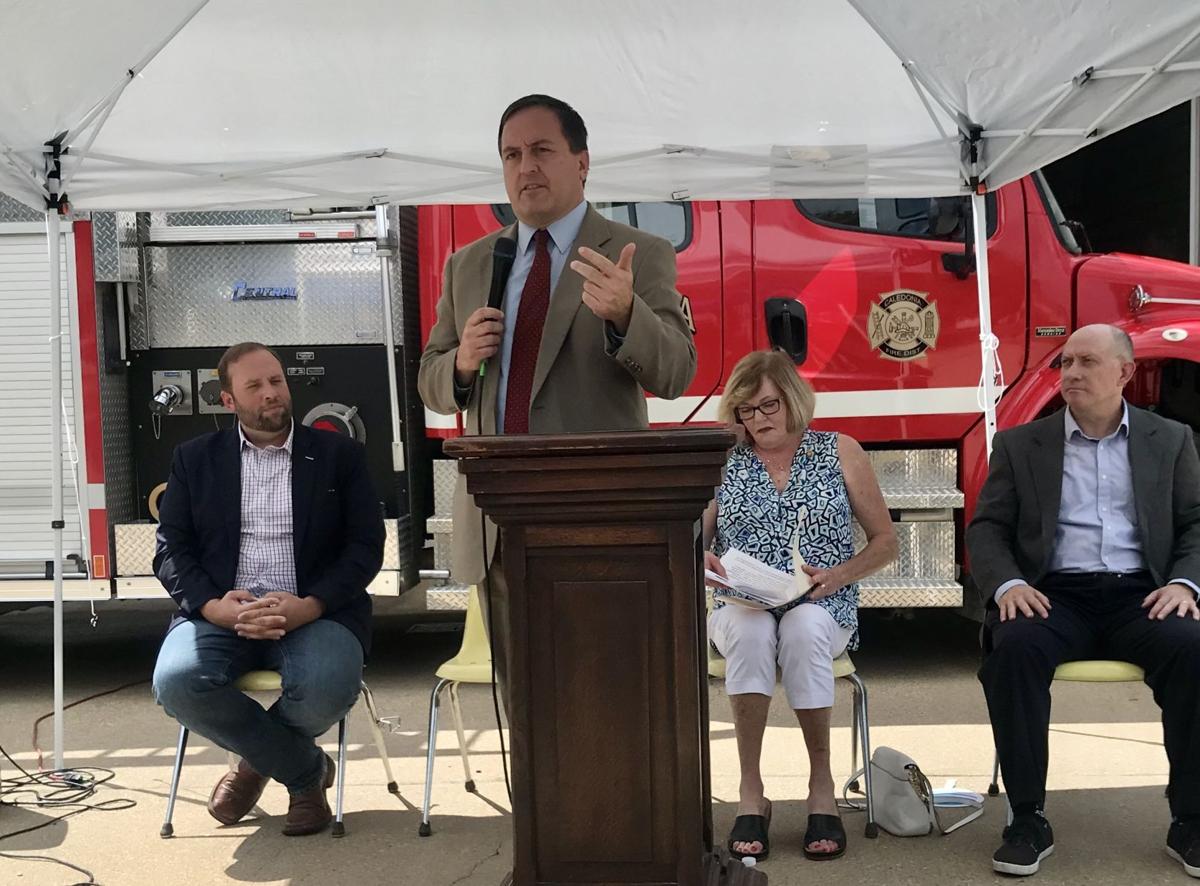 Missouri Secretary of State Jay Ashcroft said he was pleased the expanded signal in the rural areas of the 8th District will bring more opportunities with education, job training and telemedicine.

State Sen. Elaine Gannon said she remembered attending a house committee meeting in Perryville years ago to talk about the gaps in cell coverage in Missouri's rural areas.

The president of Missouri AT&T, Craig Unruh, said $1.9 billion has been spent in Missouri to build 127 new towers, with 41 build in the 8th Congressional District in the last two years.

Caledonia Mayor John Robinson III opens the ceremony noting that, while his village has many quaint, historic attractions, its businesses, institutions, residents and tourists rely on good connectivity.