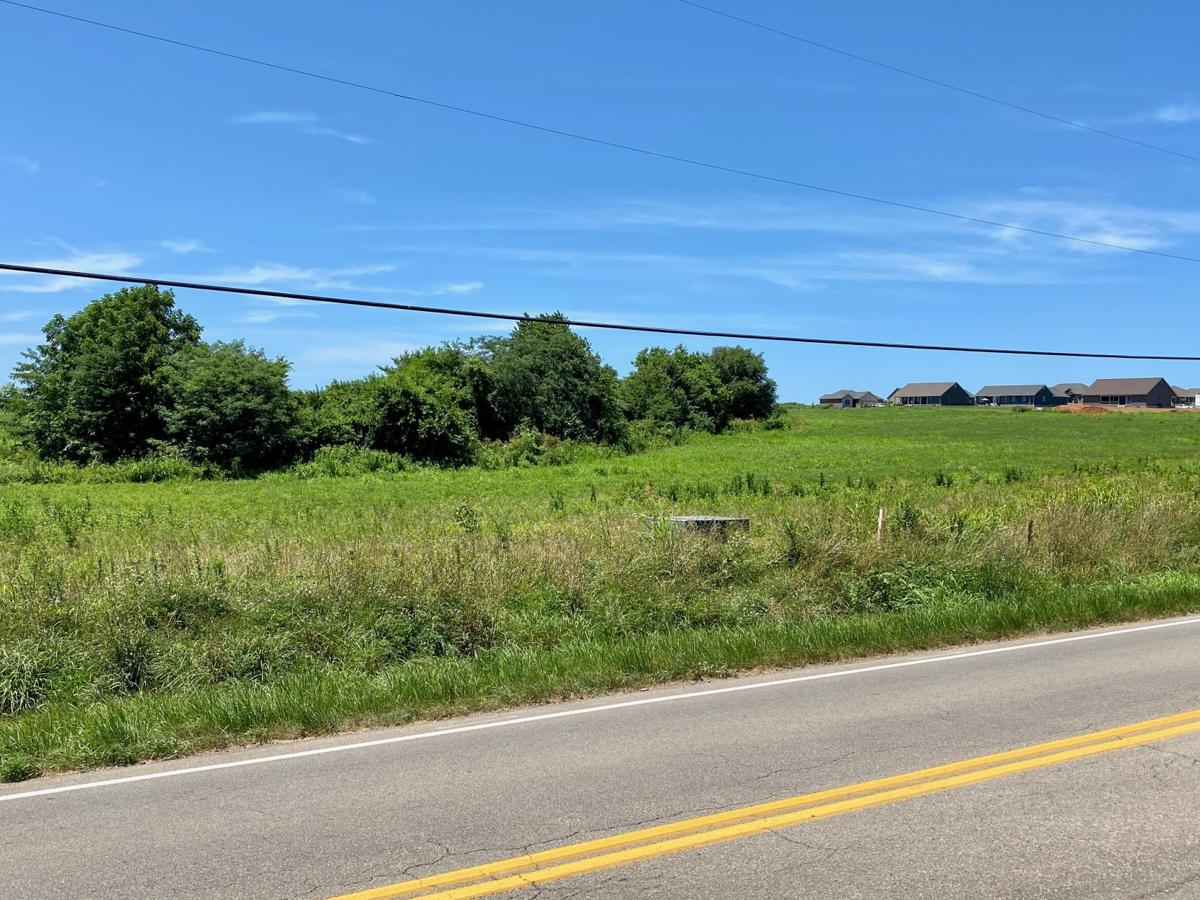 This property located along Route H, across the road from the Icon Apartments, was the subject of three public hearings at Thursday's Farmington City Council meeting. While a plan to build a number of town homes on the property received the planning and zoning commission's recommendation, a zoning change allowing a retail outlet, specifically a Dollar General store, did not.

The Farmington City Council had a busy agenda. The meeting, held Thursday at Long Memorial Hall, included three public hearings and first readings on around a dozen ordinances — more than enough to keep the council members' hands full.

The Farmington City Council held three public hearings when it met in regular session Thursday night at city hall, all of which were related to a proposed town home development, Icon Town Homes, to be built along Route H.

The 15-acre tract is currently owned by the Industrial Development Authority of Farmington (IDA).

“The reason for three public hearings was because, for the developer to achieve his purposes, there are selling changes and different things that need to be done to the development through each process,” said City Administrator Greg Beavers. “IDA has the property under contract to Peak Land Company which submitted a plat in 2018 to the city for approval of planning a development for multi-family housing, and that was approved.

“They’ve since decided not to move forward with that development, so they are under contract to Steve Johns here in Farmington to sell him that purchase agreement with the IDA. Now Mr. Johns intends to develop the property differently than Peak Land Company was going to develop it. Part of Mr. Johns’ intent is to develop some single-family condo-type units and then have commercial development on a couple of lots right on the front of H Highway.”

A group of residents from the Mountain View subdivision, located north of the development site, attended Thursday’s council meeting after learning that there might be a Dollar General store built on a portion of the property.

“They objected to any commercial development interspersed with the residential development that’s predominate out there along H Highway,” Beavers said. “During those public hearings, the folks expressed their concerns and how they felt it might disadvantage or affect their property values.

“Several people raised different concerns. Some were concerned just about property values. Other concerns were traffic on H Highway. There were some concerns raised about the potential for more criminal activity coming out of the Dollar General store into the area and things like that. There were a lot of typical concerns that any neighbor would have when a request like this is being made."

Beavers described the discussion as “civil” and “a good debate.”

“That’s why we have the public hearing,” he said. “The council had the first reading of those [rezoning/development request] ordinances at the meeting. The second reading of the ordinances will take place at the next council meeting being held on the 27th of the month. Right now [the council] is just listening to people. They’re getting a lot of input from the folks out in the neighborhood and the area, and what their concerns are. There are three different actions related to it. One is approval of the platting and development, which means we have to undo the prior platting and development and accept that final record plat. Then there’s the zoning change.

"All of the actions related to this development came from the planning and zoning commission — a favorable recommendation with the exception of the zoning change. So, the planning and zoning commission did not favorably recommend the change in zoning based on the input of the neighborhood that would allow a retailer — Dollar General, specifically — to develop on that site. Our zoning requires that a commercial zone has to either be adjacent to another commercial zone or be a minimum of three acres. There are essentially two lots. There’s a second commercial lot on the property, but it has not been communicated by the developer any specific end user for that other lot right now, so I think that’s been a concern to the neighborhood also."

Following the three public hearings, first readings and committee reports, the council approved 10 resolutions related to various city contracts, as well as the appointment of several citizens to the Police Personnel Board.

The council also performed a first reading of an ordinance authorizing the contract with the Missouri Office of State Courts Administrator for the implementation of the Show-Me-Courts Automation Software.

Area voters will cast their ballots Tuesday to select one of two candidates seeking election to the position of St. Francois County sheriff.

The Terre du Lac (TDL) community is facing the loss of insurance on its police department Sept. 1 and is in talks to merge or combine in some …

Cases of confirmed cases of COVID-19 continue to rise in the area.

Missouri’s Senate District 3 race will be determined in the Aug. 4 primary, with three Republicans vying to take the office vacated by Gary Ro…

The St. Francois County Commission continued to grapple with the problem of homeless camping at the river access at the Vo-Tech Bridge at thei…

Editor's Note: We are profiling candidates facing opposition in the Aug. 4 race. Profiles will run now through Aug. 1.

On Tuesday, voters in Park Hills will head to the polls, where one of the ballot questions will be whether to pass a Proposition P (Prop P) me…

This property located along Route H, across the road from the Icon Apartments, was the subject of three public hearings at Thursday's Farmington City Council meeting. While a plan to build a number of town homes on the property received the planning and zoning commission's recommendation, a zoning change allowing a retail outlet, specifically a Dollar General store, did not.

The Farmington City Council had a busy agenda. The meeting, held Thursday at Long Memorial Hall, included three public hearings and first readings on around a dozen ordinances — more than enough to keep the council members' hands full.