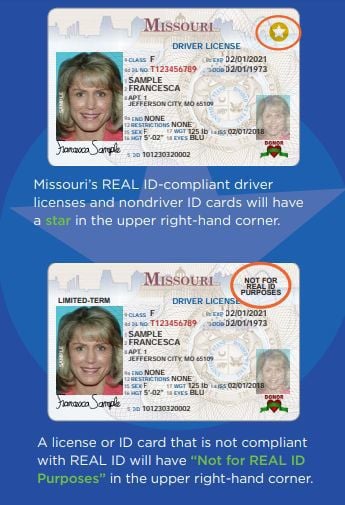 A yellow symbol in the top right corner indicates that a state-issued ID card is REAL ID-compliant. The REAL ID cards will be required when boarding commercial aircraft and entering federal facilities after Oct. 1, 2020.

Missouri is preparing for the federal REAL ID Act which will go into effect next October and require states to issue uniform ID cards that can be scanned at federal facilities and airports.

Missouri license offices and agencies that issue photo ID cards have started upgrading equipment to comply with federal legislation requiring a REAL ID from citizens to board commercial aircraft and enter federal facilities.

“Basically, it's a federal mandate that's coming down,” said Rep. Mike Henderson, R-Bonne Terre. “The whole idea behind it is they want a picture of you that is the same quality that you get on your passport so that their facial recognition software will work.”

“When it comes down to it, it's about terrorism and making sure we can use our facial recognition software when you're boarding airplanes, going onto military bases, entering courthouses ... to make them safer,” explained Henderson. “If you have a little inconvenience to make us safer, that's not necessarily a bad thing.”

The legislation was passed in 2005 and was set to take effect on Jan. 28, 2018, but some states, including Missouri, were not prepared for the deadline. The mandate was delayed for two years to allow for compliance and the new effective date is Oct. 1, 2020.

Rep. Dale Wright, R-Farmington, said the federal mandate came about, in part, to address the inconsistencies of various ID cards across the 50 states.

“How it got started is, after 9/11, there was a 9/11 Commission that was created and they went through things trying to determine what we could do to make our citizens safer,” said Wright. “And so they came up with what's called the REAL ID Act.

“It was established to set minimum security standards for state-issued driver's licenses and identification cards,” Wright said. “It was to set up just a standard where all states would be doing the same thing which would be easier to monitor.”

On March 25, the Missouri Department of Revenue began offering REAL ID-compliant driver's licenses and ID cards, the final step for Missouri to satisfy the act's requirements and regulations.

“The state kind of held out at first and the idea behind the state holding out at the beginning was we were kind of infringing on people's rights forcing them to have a certain kind of picture,” said Henderson. “So what we finally got to in the State of Missouri is, you're not actually forced to get a [REAL ID-Compliant card].

“But, we're going to the REAL ID at this point because if we don't, then Missourians aren't going to be able to get on airplanes [or enter federal facilities],” Henderson explained. “So, it kind of comes down to the fact that you have to do what you have to do to keep people safe.”

The U.S. Department of Defense (DOD) recently finalized an update to its DOD-wide installation security policy and is in the process of no longer accepting licenses and ID cards marked as being non-compliant with REAL ID across all of its facilities and installations.

This policy change impacts DOD installations in all states, not just Missouri. Anyone planning to visit a military base should contact the base in advance to obtain information regarding identification requirements.

During the Desloge Board of Aldermen meeting on Monday, Police Chief James “Jebo” Bullock took the opportunity to recognize two of his departm…

After months of speculation and rumors of retirement, Sheriff Dan Bullock today announced he will be running again for sheriff ... this time a…

St. Francois County Sheriff Dan Bullock has announced that he will run for reelection — as a Republican.

The Missouri Department of Natural Resources (DNR) will be holding a public meeting at Desloge City Hall Tuesday at 6 p.m. regarding the Owl C…

The Missouri Senate District 3 seat vacated by Gary Romine last month is in play for the Nov. 3 election, and Farmington resident Joshua Barre…

State Rep. Chris Dinkins said she wants to rein in the overgrown bureaucracy of the Missouri Department of Conservation (MDC) and make the dep…

A yellow symbol in the top right corner indicates that a state-issued ID card is REAL ID-compliant. The REAL ID cards will be required when boarding commercial aircraft and entering federal facilities after Oct. 1, 2020.

Missouri is preparing for the federal REAL ID Act which will go into effect next October and require states to issue uniform ID cards that can be scanned at federal facilities and airports.