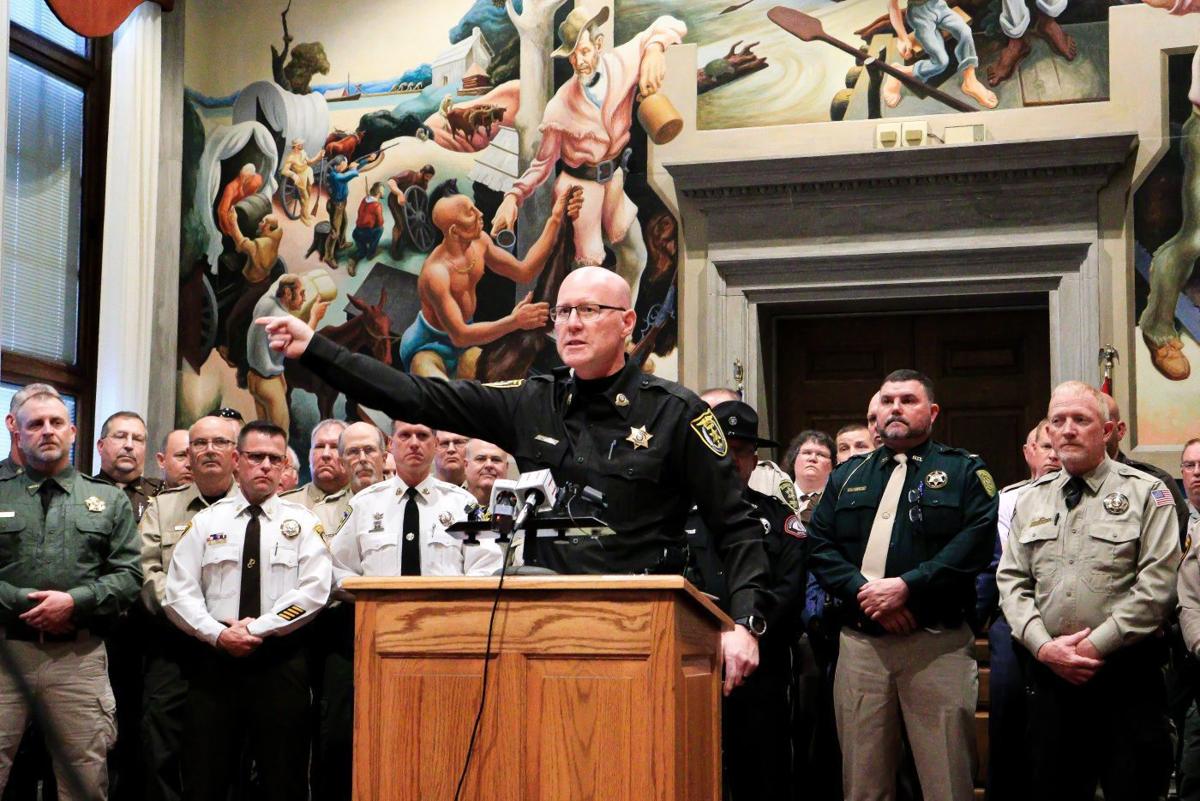 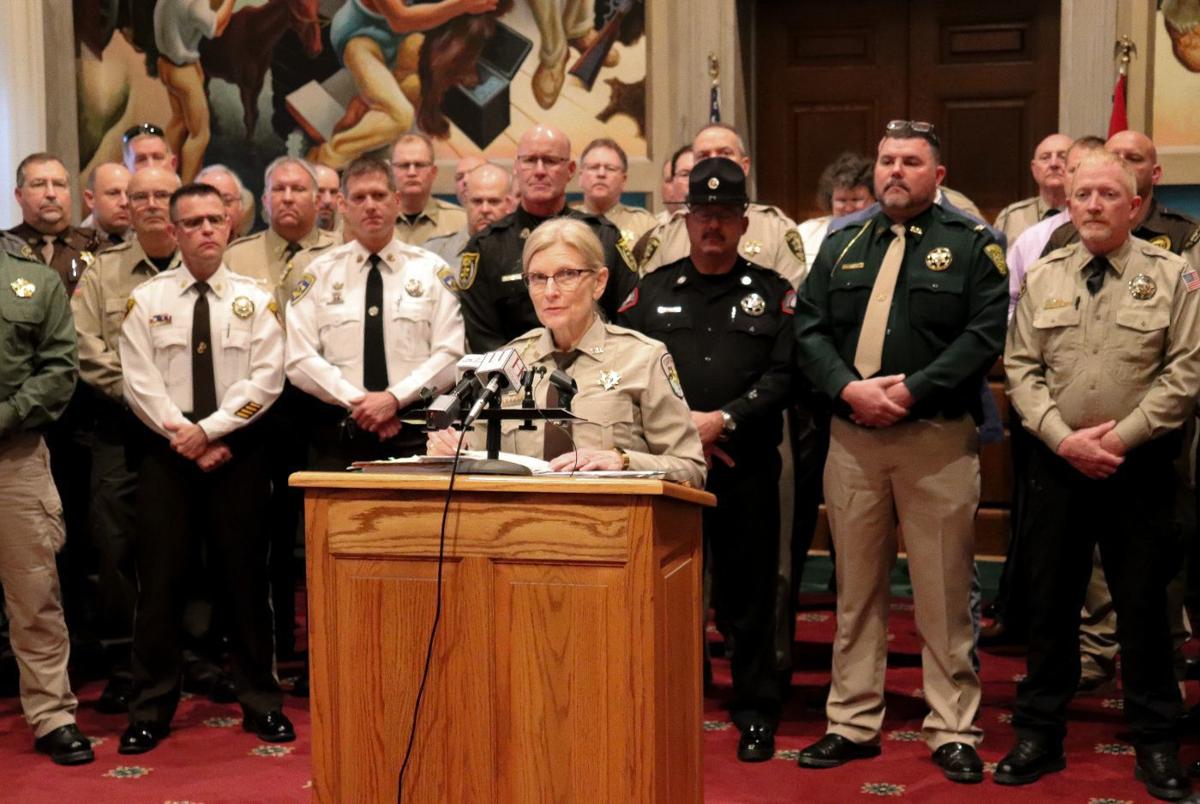 At a press conference held at the Missouri State Capitol building last week, Cape Girardeau County Sheriff Ruth Ann Dickerson talks of problems within the state's county jails and prisons, including the way jail per diem has been handled in recent years. 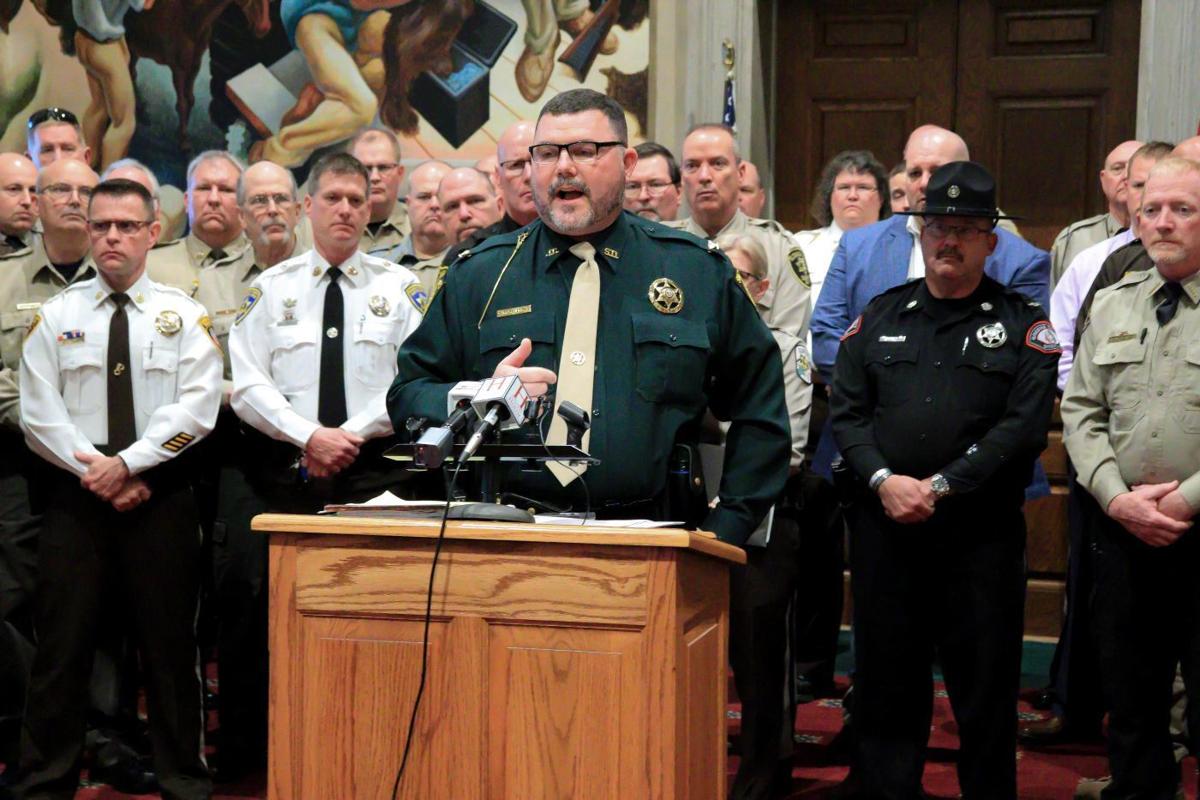 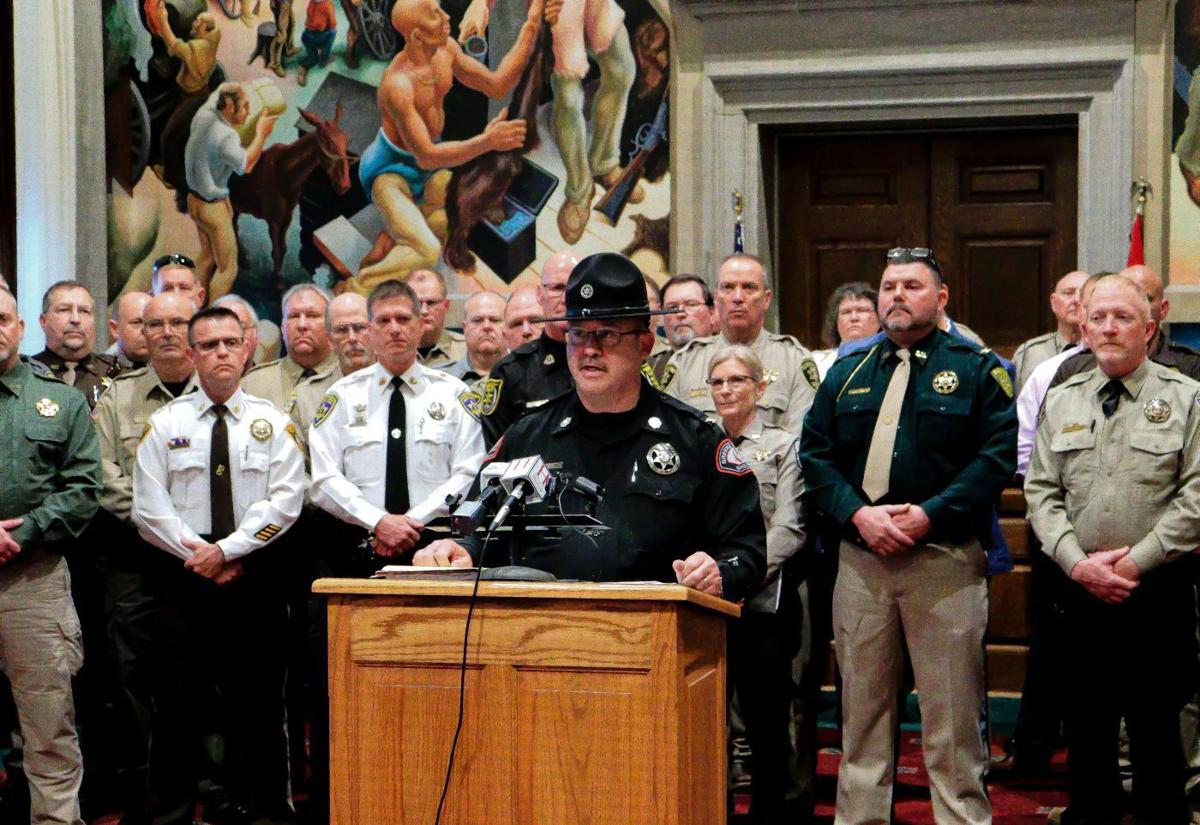 Greene County Sheriff Jim Arnott conveys continued concerns that some Missouri sheriffs have with the direction of the Missouri Department of Corrections and Probation and Parole. 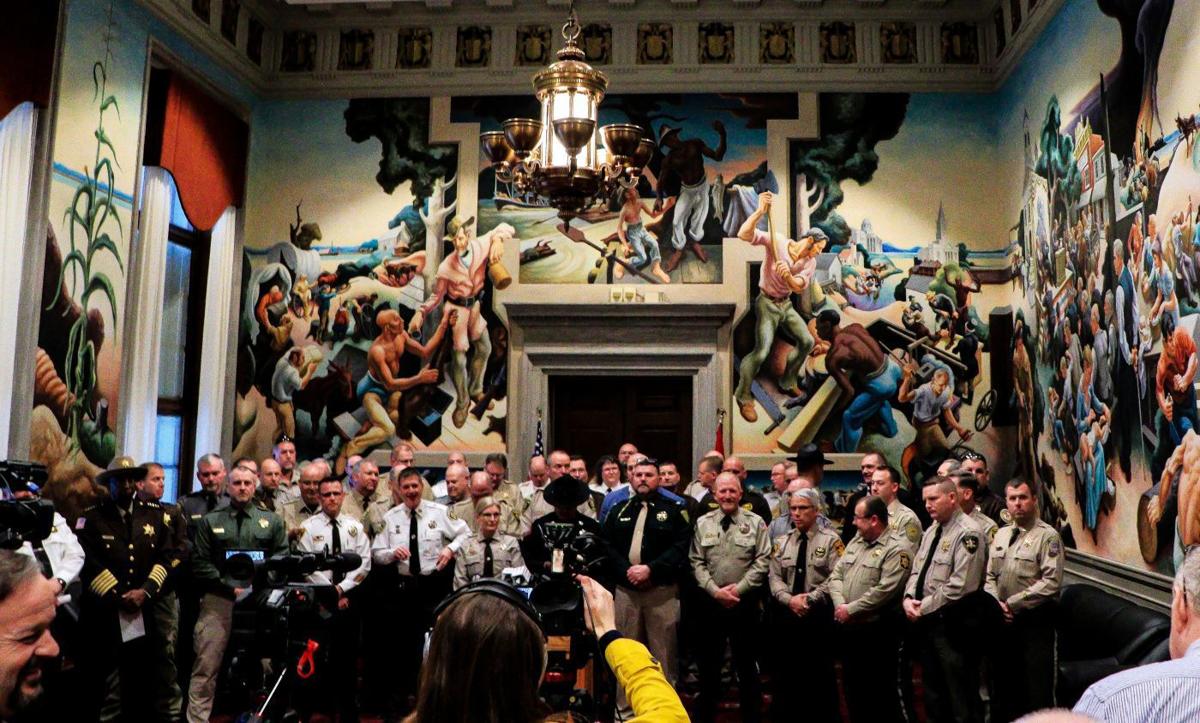 Close to 50 Missouri sheriffs meet in the Missouri House of Representatives lounge, on March 11, for a press conference voicing concerns and calling for action from state law-makers.

Out of the 114 Missouri sheriffs, 48 came to the capitol press conference on March 11 with concerns from their departments and citizens they serve.

Lewis County Sheriff and MSA President David Parrish began by explaining the need for a legislative remedy to the problems that law enforcement officials are experiencing on a local level.

“We believe that in order for all Missourians to be protected, our bureaucrats, our state senators, our state representatives must remember where they came from,” said Parrish. “We have sheriffs from across the state [here] prepared to talk about several things.”

The main concerns Parrish said county officials hope to work with legislators to address include issues with recent bail reform rules, jail per diem, and the “catch and release” policies of the Missouri Department of Corrections.

“These are the things that we are here for on behalf of our local law-abiding citizens to remind very well-intentioned people in this building that what we’re facing is real and something needs to be done,” said Parrish. “We hear too often about what is wrong with society, and why doesn’t society do more for the career criminal.

Cape Girardeau County Sheriff Ruth Ann Dickerson took the podium and spoke about the problems within the county jails and prisons, including the way jail per diem has been handled in recent years. Jail per diem is money paid by the state to county jails for housing state inmates.

“Today, the state owes the counties of the State of Missouri, as of December 2019, an estimated $33.4 million,” said Dickerson in reference to the overdue jail per diem payments. “So we are here today, carrying the concerns of our citizens. The citizens that we are sworn to protect and serve, and the citizens that the representatives and the senators swore to represent in the State of Missouri to be your voice.”

Dickerson explained that the state funding must be appropriated to pay the bills owed by the state, and she emphasized that the per diem should be the responsibility of the state.

“And we are here today to carry our voices forward so that our legislators, our senators, and our representatives know where we stand,” Dickerson said.

Greene County Sheriff Jim Arnott spoke about continued concerns that the sheriffs have with the direction of the Missouri Department of Corrections (DOC) and Probation and Parole (P&P).

“Probation issues are the continued failure from the top of this organization,” said Arnott. “Our local P&P officers’ hands are being tied by not being able to recommend revocation.”

Arnott mentioned a few hours prior to the news conference, he spoke with a circuit court judge who told him that he had seen offenders in his courtroom with 15-20 probation violations yet still no recommendation from P&P officers for revoking the offender’s probation or parole.

“We have proved that offenders come to the P&P office, take a urine test, show positive for methamphetamine, and simply walk out the door, get into the vehicle and drive off,” Arnott said. “This is a public safety issue. This puts Missouri citizens' lives in danger every day.”

Arnott also talked about what he called the “Mom Matrix” utilized by Missouri’s probation and parole agency.

“If an offender shows up for their mandated appointment, they can get a gift card for gas or food,” he explained. “As I have said before, my grandbaby’s daycare uses this same model. This is ridiculous.

“You have adult criminal offenders who are rewarded for showing up on time,” said Arnott. “But, you know what the reward is? Not being locked in jail and not going to prison — that’s the reward. Not a gift card.”

The Greene County sheriff said everyone must remember that the higher criminal justice system is based around taking care of victims.

“So on behalf of all Missouri sheriffs, we want our message to be very clear,” he said. “Sheriffs will continue to be vigilant, and we’ll be tough on crime. But Missouri legislators, we need your support in changing the philosophy of this department.”

Johnson County Sheriff and MSA’s Second Vice President Scott Munsterman was the last to speak at the conference.

“I’m here to address the concerns that we have, as sheriffs, with the new bond reform that the Supreme Court enacted back in 2019,” said Munsterman. “In the reform, they label drugs and drug offenders as non-violent offenders. I disagree with this wholeheartedly.

“During our investigations with our current crimes in our communities that are dealing with drug offenders, we’re also seeing that they’re all tied in with your burglaries, your car larcenies, your simple property crimes,” he explained. “The offenders are utilizing each and every one of our citizens’ assets to help supplement their addiction.”

The reforms Johnson was referring to were the result of actions taken by the Missouri Supreme Court that went into effect on July 1. New policies were put into place, requiring courts to consider non-monetary pre-trial release from jail for suspected offenders and certain offenses.

Since being enacted, the bail reforms have been referred to by law enforcement officials and members of the public as “catch and release” policies.

Johnson said with this reform, law enforcement has been booking and releasing individuals suspected of crimes back out into the communities while only issuing them a summons to appear in court. He further explained that since the reforms were implemented, warrants issued for failing to appear in court in his county have risen 28%.

Many state legislators have been actively taking steps to address some of the issues the sheriffs touched on during the news conference.

In January, more than 80 lawmakers signed a letter delivered to the Missouri Supreme Court demanding that the “flawed rules” of the new reforms be rescinded.

State Rep. Justin Hill, R-Lake St. Louis, a former police officer, drafted the petition, and said while he managed to get more than 80 legislators to sign the letter, more state lawmakers are in support of the action.

“We had a lot of representatives that were sorry that they couldn’t put their names on the petition, but the weather was bad that day,” Hill told the Daily Journal following the press conference. “I had to get the letter to the Supreme Court, but we have a lot more support than what was in that letter.”

Rep. Dale Wright, R-Farmington, was at the sheriff’s press conference. Wright has been a supporter of change to the bail reforms enacted by the Supreme Court and thinks the pendulum has swung too far in the wrong direction.

“That’s not really [the supreme court’s] job,” said Wright, referring to the new policies which effectively change the law. “They don’t create the laws. They’re supposed to interpret the laws.”

Hill is also the sponsor of House Bill 1937 aimed at modifying some of the Supreme Court Rules relating to criminal procedure.

The bill was under review by the House Rules Committees, and a committee vote took place shortly after the press conference.

“We’re hoping, a lot of these sheriffs are going to encourage the speaker to send it to the calendar quickly so that we can have this debate on the House floor,” said Hill just before the vote.

“You know, maybe some might feel one way or another,” he added. “This definitely has hit rural Missouri much harder than urban St. Louis, or urban Kansas City; That is for sure.”

The House Rules Committee voted to pass the bill onto the next step, which is to place the bill on the House calendar where it will be scheduled for hearing and debate on the House floor before a final vote.

If passed by the House, the bill must then be passed in the State Senate.

The free COVID-19 testing on Tuesday at Mineral Area College is a great opportunity for the community, according to St. Francois County Health…

Council weighs in on project

The Farmington City Council held three public hearings when it met in regular session Thursday night at city hall, all of which were related t…

Upcoming elections and sales taxes were discussed during the St. Francois County Commission meeting last week at the courthouse annex.

The St. Francois County Health Center (SFCHC) wants to remind parents to make sure their child’s immunizations are up-to-date before the schoo…

Counts elected to Bismarck Board of Aldermen in special election

An anonymous group is asking Iron Mountain Lake residents to sign a petition requesting a state audit of the city’s finances. But city officia…

At a press conference held at the Missouri State Capitol building last week, Cape Girardeau County Sheriff Ruth Ann Dickerson talks of problems within the state's county jails and prisons, including the way jail per diem has been handled in recent years.

Greene County Sheriff Jim Arnott conveys continued concerns that some Missouri sheriffs have with the direction of the Missouri Department of Corrections and Probation and Parole.

Close to 50 Missouri sheriffs meet in the Missouri House of Representatives lounge, on March 11, for a press conference voicing concerns and calling for action from state law-makers.