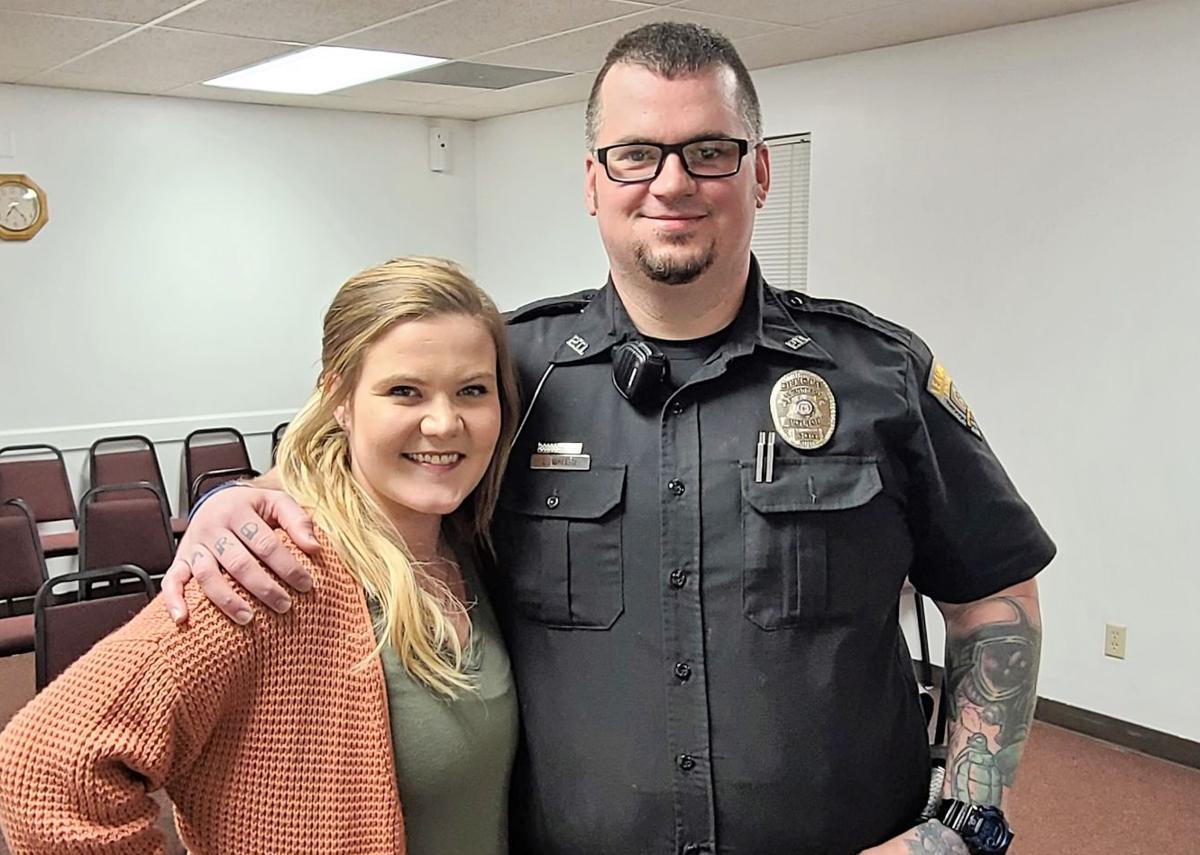 On his first night on his own, Leadington Police Officer Donald Waller helped push Samantha Matthew's car out of the snow when it got stuck as she was trying to visit her daughter's grave. He also started shoveling the road and placed a stuffed bear on the grave. 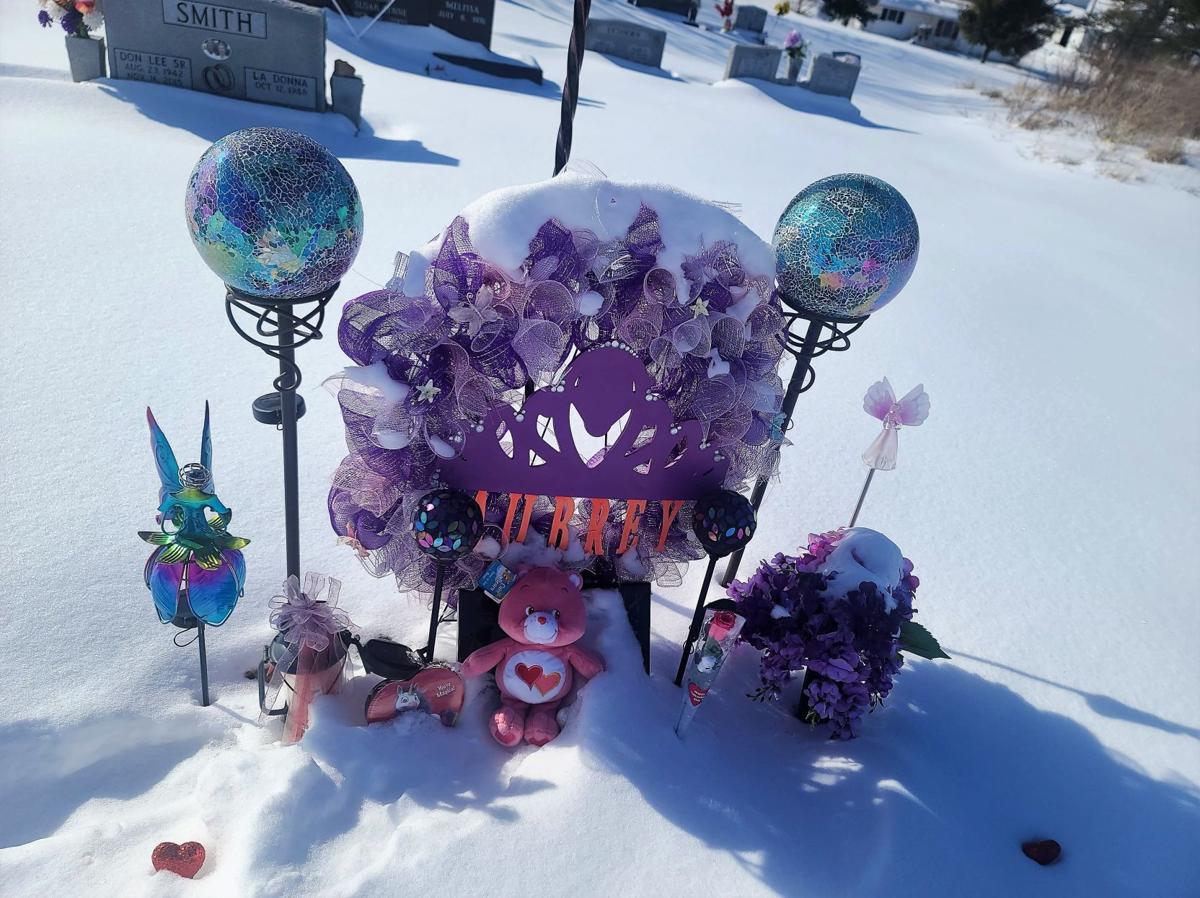 Leadington Officer Donald Waller shoveled a path for Aubrey's family and left her a stuffed bear.

The Leadington Police Department is back at full force and the community has noticed, in a good way.

Officers Marvin Chapman and Donald Waller have joined Jerry Hicks with the department. Chapman isn’t a new face as he has worked for the city before. But Waller is fresh out of the Jefferson County Law Enforcement Academy and is already making an impression on the community.

After training with Hicks for about a month, Waller had his first night alone on the job earlier this week when he received a call from dispatch about a car stuck in the snow in Woodlawn Cemetery.

Samantha Matthews was trying to visit her daughter Aubrey, who died in October at the age of 4 of brain cancer.

“We have went and seen Aubrey every single day, at least twice a day since she passed,” Matthews said in a Facebook post on their Aubrey Strong page. “For three days we haven't been able to see her due to this large amount of snow and not being able to get into the cemetery.”

Her husband was home with their three other girls, so when her car got stuck, she called Central Dispatch to see if they could find someone to help. That’s when Waller showed up.

“This young man, first night on the job by himself, came and pushed my car out not once, but twice because it got stuck again while he was there,” said Matthews, who gave the Daily Journal her blessing to share her story. “Once I was out, I explained to him why I was stuck and apologized for him having to help.”

But that’s not all the new officer did to help the family.

“I later drove by and he was there, on duty, in the 15 degree weather, shoveling a path with a hand snow shovel,” Matthews continued. “Words cannot express how heart-warming this was.”

She immediately pulled over and started crying. He explained to her that it was weighing on his heart that she couldn’t see her daughter. He also got a teddy bear to place on the grave.

“A huge thank you to Officer Waller in Leadington,” Matthews said. “Your first night on the job by yourself will be one you never forget because you made a huge impact and I hope people see that there are still good people out there.”

Matthews and her husband reached out to city leaders to let them know how grateful they were.

“He's not from the area, so he wasn't really familiar with the whole situation, how much that little girl meant to our community,” Leadington Mayor Joe Davis said.

Davis and Alderman Gregg Skaggs met with Waller to commend him on a job well done.

“That's exactly the type of character and behavior we're looking for and the type of community policing and things that we're going for in our new approach with Leadington,” Davis added.

Davis also told Waller he set the bar high for himself on the first night.

“I couldn't be more ecstatic with how he's developed,” Davis said, “and not just him, but all of the officers; the way they pulled together, especially coming through some of the stuff that we've gone through in the last couple years, especially around the police department.”

Chapman had expressed interest awhile ago in coming back, Davis said, depending on what direction the city took with the police department.

“So he's come back on board,” he explained. “He's obviously already familiar with all of our ordinances and our policies and things like that. And we've looped him in on some of the changes and the approach that we're taking with the police department. He's been back in gung ho and doing well.”

Davis also commended Hicks, who is still part-time but working about 30 hours per week, for sticking with the department and helping them with recruiting and training.

He also said they are hoping to hire another part-time officer soon. And then depending on the budget, Davis is hoping those part-time positions could turn into full-time.

Since they’ve brought on more officers, he said he’s seen the comments like, "the Leadington speed trap is open again.” He is hoping these new officers can break that stigma. And he’s pleased with their effort so far in, not just looking for the negative and to enforce legal infractions, but in looking for ways to help the community.

“I couldn’t be happier,” Davis added.

The positive attention for the department has been nice, he admitted, but that’s not what sticks with him. It’s that “that is what those guys are out there doing when they don't think anybody is watching.”

On his first night on his own, Leadington Police Officer Donald Waller helped push Samantha Matthew's car out of the snow when it got stuck as she was trying to visit her daughter's grave. He also started shoveling the road and placed a stuffed bear on the grave.

Leadington Officer Donald Waller shoveled a path for Aubrey's family and left her a stuffed bear.