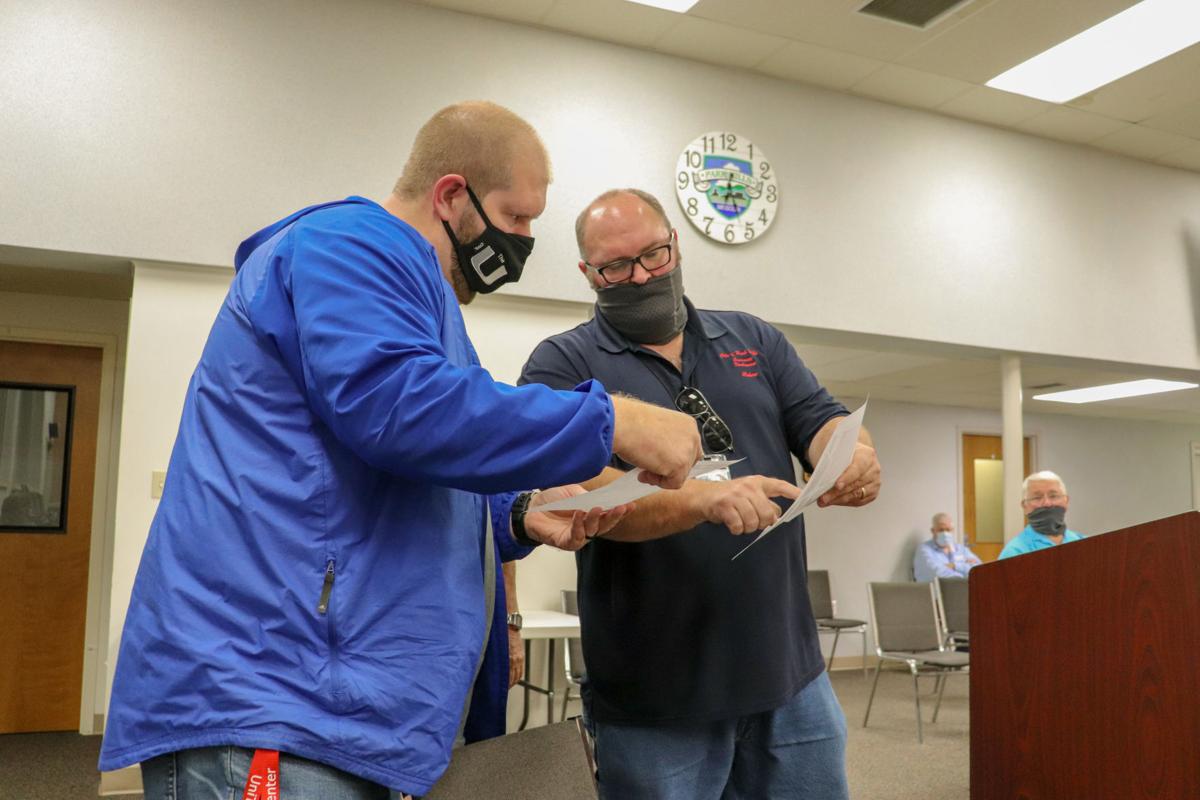 Park Hills Community Development Director Robert Sullivan explains how a rezoning ordinance might affect the traffic around the River Chase Estates to one of the area's residents during a public hearing before a council vote on the matter. 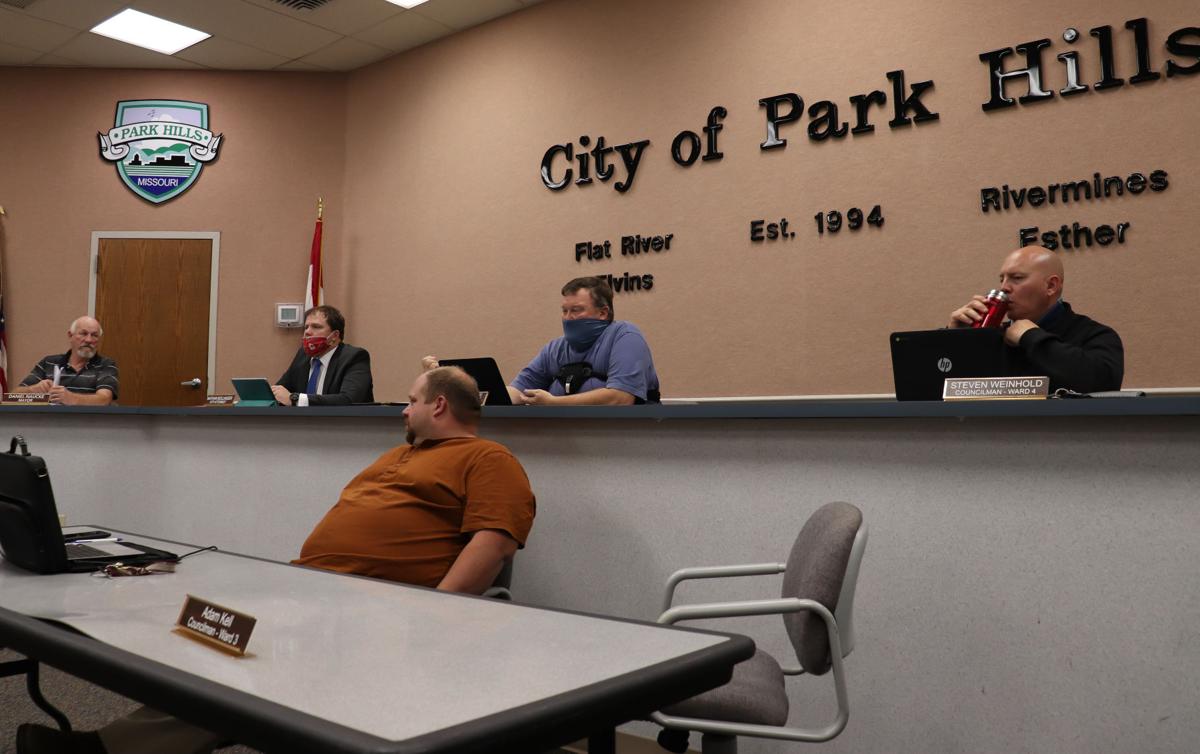 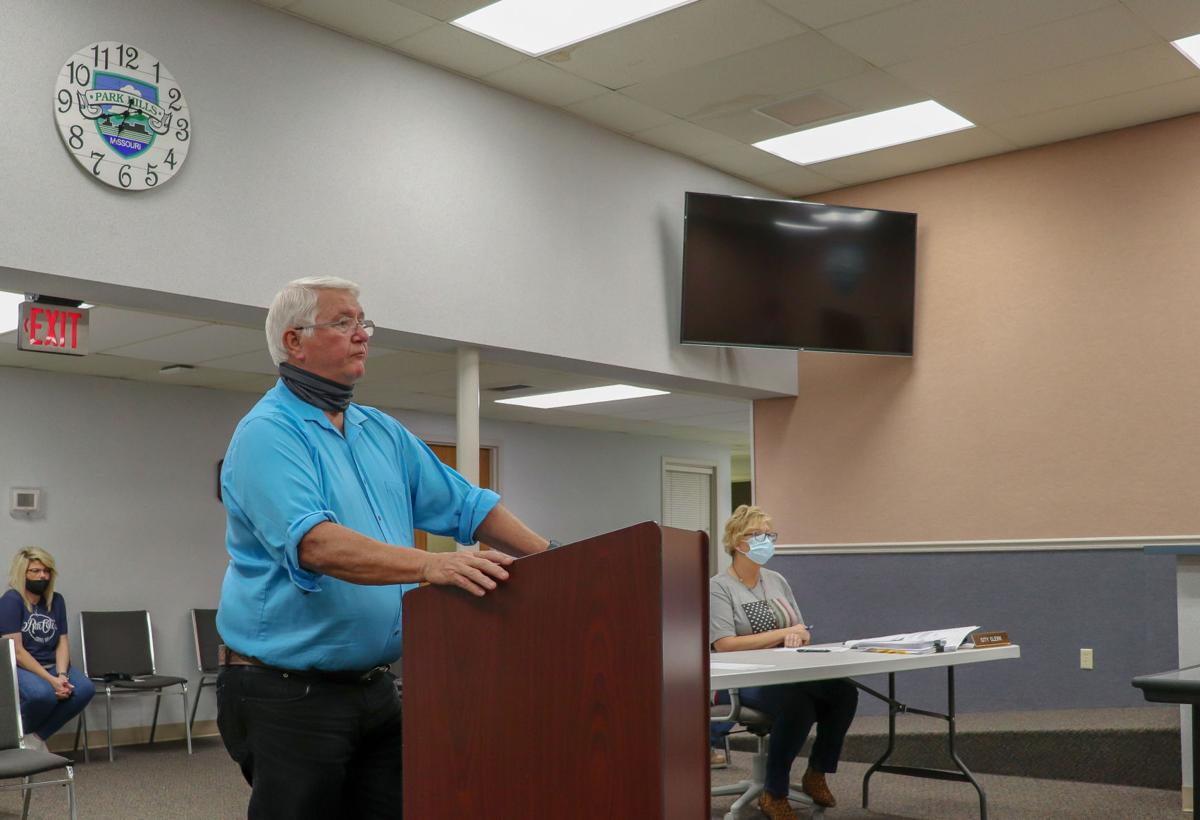 Park Hills City Administrator Mark McFarland explains the Water Department's need for a SCADA system to monitor and control the water utilities as the existing electronic system has become inoperable.

The meeting began with several public hearings related to special use permits.

Following the public hearings, the council approved special use permits for the operation of a dog-breeding facility at 1029 W. Main St., the development of duplexes located at Firman and Meadow Streets, as well as the construction of duplexes at Emerson and Spruce Streets.

The council also approved an ordinance accepting a plat of a subdivision known as "Flat River Commons 2" in the area being developed near Fairgrounds Drive. The area now includes residential lots, where duplexes are planned to be constructed adjacent to the commercial lots located there.

The council accepted an ordinance to approve a subdivision plat located at St. Joe and Parkway Drives in the River Chase Estates subdivision area. Community Development Director Robert Sullivan said with the council's approval, the largest piece of property in the subdivision will be divided into four commercial lots.

The council moved on to increase bulk trash pick up fees from $7.50 to $10. The fee increase will take effect on Jan. 1.

The fee increase was proposed because the city has been losing money to provide the bulk pickup service as the cost of trash pickup and dump disposal has been steadily inflating.

The revised ordinance states that bulk trash collection service will be offered the second full week of each month during the year on the following schedule: Bulk trash in Ward 1 will be collected in January, May, and September; Ward 2 bulk trash will be collected in February, June, and October; bulk pickup in Ward 3 will be in March, July, and November; and Ward 4 bulk pickup will be in April, August, and December.

The council approved an agreement to transfer possession of Christmas decorations from the estate of the late-Gary McKinney to be used in Columbia Park, Elvins Park, and other Christmas displays around town. The city agreed to pay $10,000 for the large lot of holiday decorations. McKinney's estate will also receive a $40,000 charitable donation tax credit as part of the agreement.

The council approved several other equipment purchases during November's meeting.

The fire department will purchase five new sets of turnout gear for a total of $10,000 from MacQueen Emergency Company of Eureka.

The Public Works Department will also be getting a new 8-foot plow blade at a price of $5,541.70 from Midwest Systems Truck Equipment of St. Louis.

The purchase of a Griswold pool pump was approved to replace the broken pump that prematurely ended this year's pool season. The Parks and Recreation Department will be getting the new pool pump for $7,015 from the Missouri Machinery and Engineering Company of St. Louis.

Utility Director Frank Shovlin explained to council members that the current system used to monitor and operate the city's water utilities had become outdated and frequently inoperable. He recommended the SCADA system, which has become an industry standard, to allow the department to provide water services to citizens effectively and efficiently.

The installation of the SCADA system will take more than a year to complete The new system will be purchased from Electric Controls Company, Inc. of Earth City at a price not to exceed $210,480.

City Administrator Mark McFarland said the city had budgeted $180,000 for the water system upgrade during this fiscal year. He said since the project's projected completion date falls in the next fiscal year, he does not expect the project to go over budget.

During November's regular meeting, the council also appointed Candy Inmam to the Park Hills Library Board following the resignation of Shauna Martin.

Three busloads of Missouri residents left Tuesday for the rally in Washington D.C. and are set to return Wednesday night.

Sen. Hawley: Why I Objected

Last week I objected during the Joint Session count of electoral votes in order to have a debate on the issue of election integrity. My object…

The Park Hills City Council met for the first regular session of the new year on Tuesday. During the meeting, council members remembered longt…

Mayor looks ahead to 2021 projects

With the start of a new year, Farmington Mayor Larry Forsythe spoke about projects the city will be completing and what improvements he sees f…

Leadington board hears update on police

The Leadington Police Department is in a time of transition and the Board of Aldermen got an update on it during its meeting on Monday.

The new year is getting off to a productive start at Bonne Terre City Hall. The city just hired a new building inspector, as well as its first…

With a week left to file, races emerge for April election

Several individuals have filed for spots on municipal and school boards in the April election. The last day to file is Tuesday.

Phase 1B of vaccination plan could be in next few weeks

City of Desloge first responders and essential workers may be able to get the COVID-19 vaccine in about two to three weeks, according to City …

All county and state government offices, as well as most schools and Mineral Area College, will be closed Monday in observance of Martin Luthe…

Park Hills Community Development Director Robert Sullivan explains how a rezoning ordinance might affect the traffic around the River Chase Estates to one of the area's residents during a public hearing before a council vote on the matter.

Park Hills City Administrator Mark McFarland explains the Water Department's need for a SCADA system to monitor and control the water utilities as the existing electronic system has become inoperable.