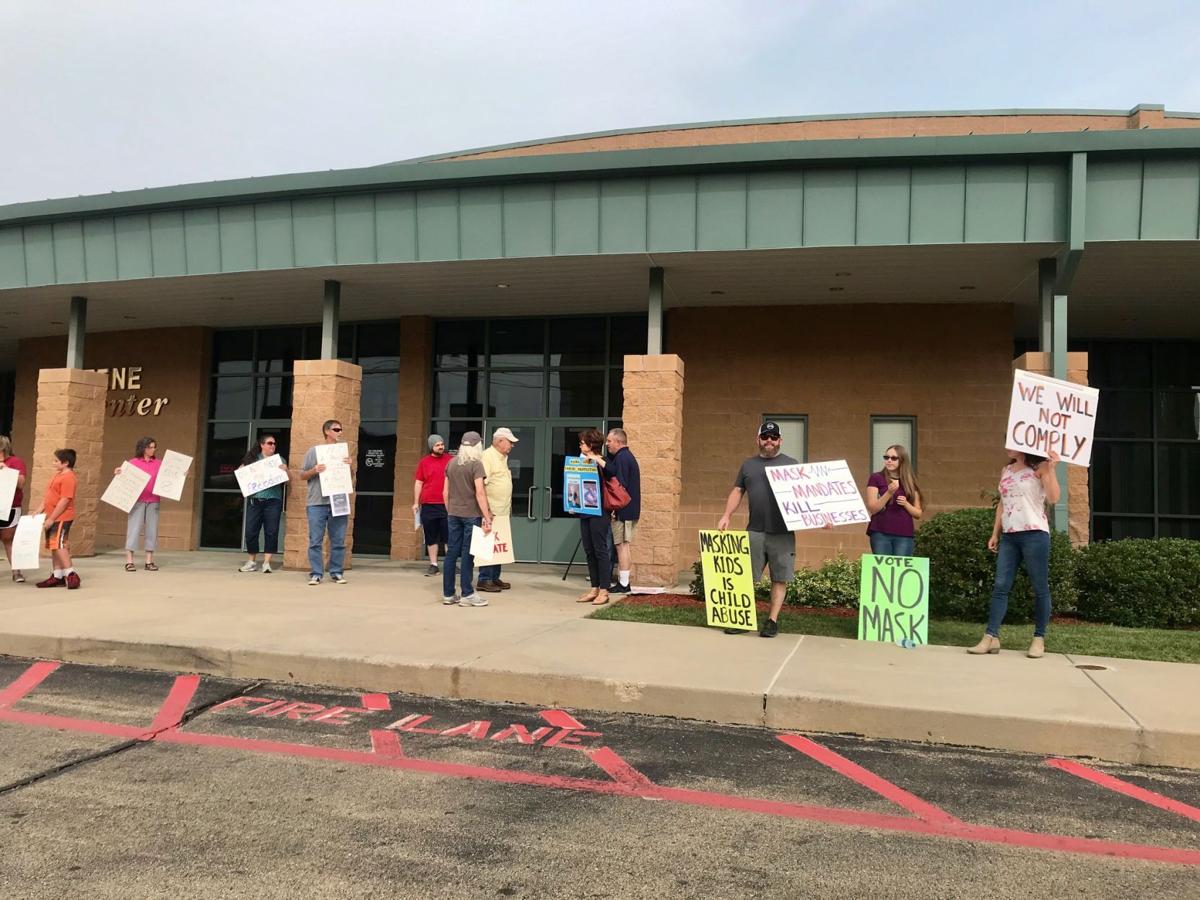 Residents against a county mask mandate get ready for the St. Francois County Health Center Board meeting on Tuesday afternoon. The meeting had more than 100 people in attendance. 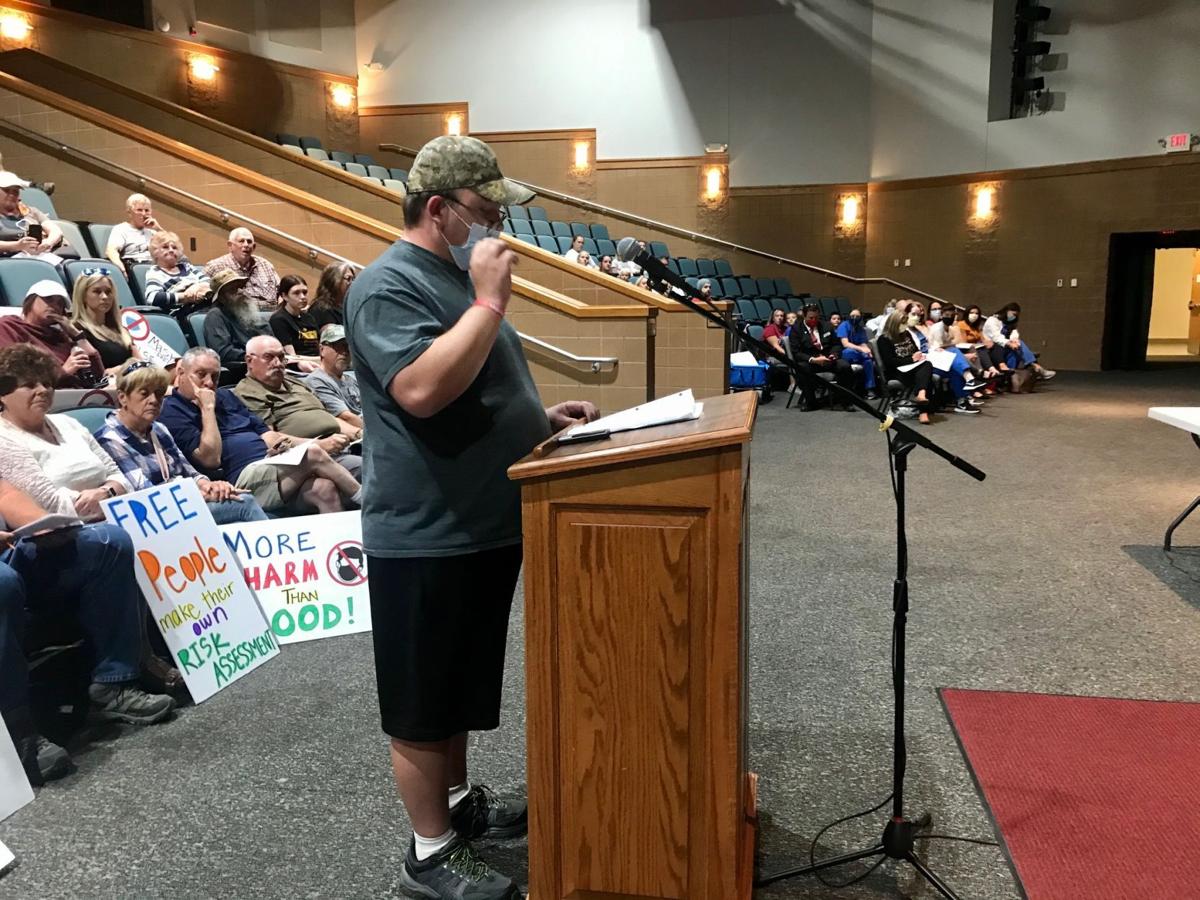 One anti-mandate speaker entreats the county health board to reconsider approving a mask mandate, saying that while he approves of mask wearing, he doesn't think it should be mandated.

Protesters’ tempers flared during the St. Francois County Health Center forum regarding a countywide mask mandate, but ultimately, the health board voted 3-1 in favor of mandating masks, effective Monday.

Penalties for violating the mandate would focus on fines.

The mandate, which at press time was still a draft on the SFCHC web page, can be found at

Voting in favor of the mandate was St. Francois County Health Center Board Chairman Jack Poston with fellow board members Tara Wadlow and Jason King. Voting against the mandate was Dr. Victoria Damba, doctor of osteopathic medicine in family practice. Board member Joni Bannister was absent.

“People are very emotional, so it didn’t surprise me the things that were said,” Poston noted after the meeting, which allowed public comment for about 30 minutes before the vote was taken. Business owners and doctors joined in at the podium to speak for and against the mandate.

“We wanted to hear from the public. We got mixed reviews. The majority of the people who spoke, spoke against it and it is what it is,” said Amber Elliott, St. Francois County Health Center director. “We know the public was divided, based on the public comment that we took prior to this, it is almost split right down the middle. So it’s what we were expecting.”

The public comment portion before the vote was a mix of pro- and anti-mandate sentiments, most were against.

The death rate was called low by many anti-mandate speakers, who also cited reasons such as PTSD, general anxiety, infringement on their freedoms and questionable effectiveness of masks in preventing or slowing the spread of the coronavirus.

Those for the mandate cited epidemiology reports showing that, while not 100% protection, mask-wearing — when boosted by mask mandates — seemed to “slow the spread” while combined with other health-protective measures like hand washing and social distancing.

The first to speak was Parkland Health Center President Annette Schnabel, who acknowledged St. Francois County was in a red zone and asked that the mandate be invoked. Schnabel pointed out that some days, some departments are “in the red,” meaning they can no longer take any more patients, due to the spread.

Since her speech was muffled, many carrying anti-mask signs in the audience yelled at her that they couldn’t hear her.

“Is the microphone on?” one yelled. “Turn on the microphone!” another yelled. “It’s probably her mask!” many dispersed through the audience murmured.

Many of the pro-mandate speakers were booed and heckled to the point they were unable to be heard by the board. Farmington attorney Ed Pultz asked the board during his pro-mandate comments to get the audience “in hand,” which brought louder boos and heckling from the audience.

Poston intervened, asking the audience to quiet down and show respect to all speakers. The heckling continued more quietly, with one audience member shouting at Poston, “yes, ma’am!”

The anti-mandate speakers were given long rounds of applause and excited cheers at the end of their two-minute presentations.

Sue Cook, retired teacher and resident of Terre Du Lac, cited statistics that she said proved the ineffectiveness of masks.

Restaurant owner Joan Hurst of Farmington noted that although her son lived in a city that mandated masks, and although he had been careful given his immunocompromised condition, he still caught the virus and was counted among St. Francois County’s COVID statistics, although he lives elsewhere.

A doctor noted that he was surprised by the “emotional intensity” surrounding the mandate, of which he wasn’t strongly in favor due to “compulsion vs. voluntary” aspects.

Half an hour into the meeting, the board cut off comments and entered the business portion of their meeting, approving minutes of Aug. 27 and Sept. 1 meetings. They then voted to amend the mandate to show an enforcement date of Monday, Sept. 21, so as to give businesses, schools and other public places time to adjust to the mandate’s requirements. The four voting board members unanimously agreed, to the loud groans of the audience.

Dr. Damba spoke up, reassuring the audience that they were strictly voting to amend the mandate’s official verbiage, they hadn’t approved the mandate yet. But when the mandate came up for vote, Wadlow, King and Poston voted in favor, with Dr. Damba voting against it.

Poston then invited the board members to speak.

Dr. Damba told the audience she voted against the mandate because, while she thinks there’s a benefit to masking, but she worried that masking provided a false sense of security and increased anxiety. The crowd cheered loudly, and she continued to say that those with higher mortality potential — the elderly, the immunocompromised — already stay home, for the most part.

“It’s a choice that we all make about things about our health, and for people believe that a mask mandate is a necessary thing, it’s the mandate that’s the problem,” she said. Many loud cheers erupted from the audience.

Wadlow observed that, as with any medical issue, it’s important to get treatment and information from doctors who specialize in those areas.

“You wouldn’t go to a podiatrist or a foot surgeon for heart surgery,” she said. “The Infectious Disease Society of America has pushed for masking since July 8 and said of all the simple and effective steps we can take to slow the spread of coronavirus, masks are key among them.”

As she continued, a few in the audience yelled “Bull!”

Poston said they were sympathetic to those who were anxious about wearing masks, to those young children being expected to wear a mask, and to those who had breathing problems, and noted, “Good news, we addressed those concerns, and this mandate covers those issues.” As he continued he was shouted down, and turned into a vote, with many in the audience hollering insults against the board.

“Hey! Get six feet apart!” bellowed a man in the center rows toward the board’s table at the front of the audience. “Get ‘em boys!” he hollered at the police in attendance, “they’re not six feet apart!”

The anti-mandate crowd slowly made their way out of the building, or over to the board members, some still loudly peppering questions at board members until the police moved between them.

“I expected some opposition,” Poston said after the meeting. “People are very emotional these days, so it didn’t surprise me what was said tonight.

“And it’s America, God bless’em if they want to speak their mind.”

Residents against a county mask mandate get ready for the St. Francois County Health Center Board meeting on Tuesday afternoon. The meeting had more than 100 people in attendance. 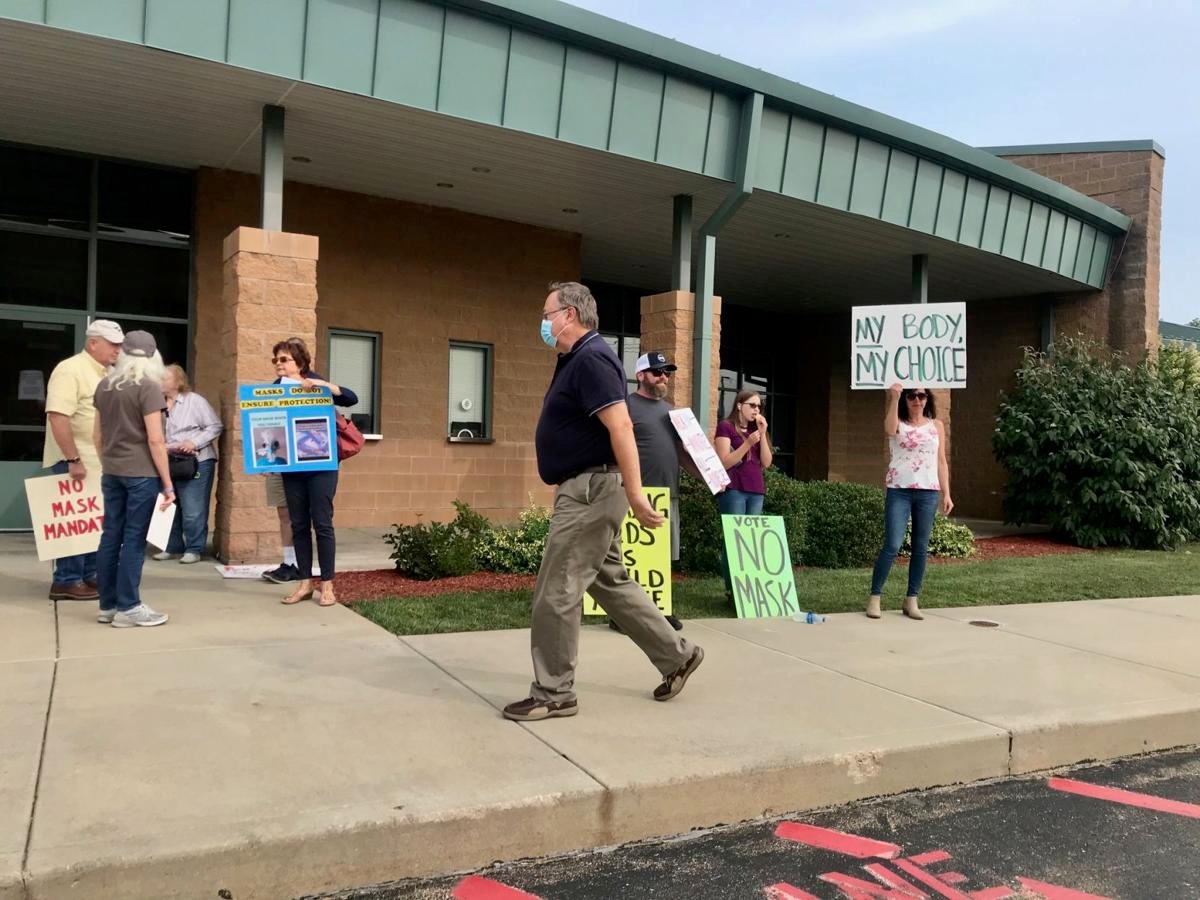 Protesters greet audience members as they make their way to the Tuesday meeting at the Farmington Centene Center, where the mask mandate was approved an hour later. 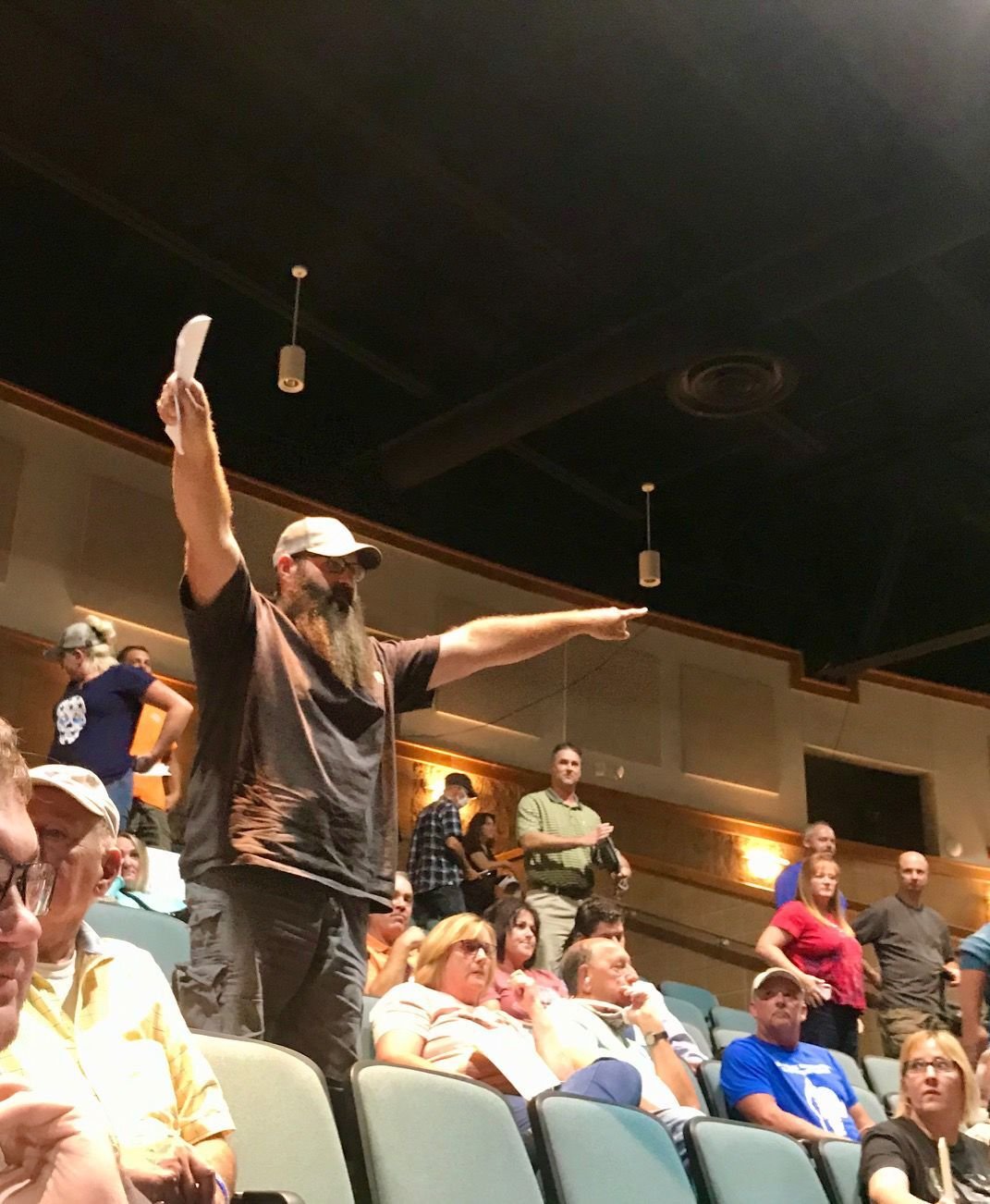 "Get six feet apart!" bellows this anti-mandate audience member after the vote was taken to approve the St. Francois County mask mandate which takes effect Monday.

One anti-mandate speaker entreats the county health board to reconsider approving a mask mandate, saying that while he approves of mask wearing, he doesn't think it should be mandated. 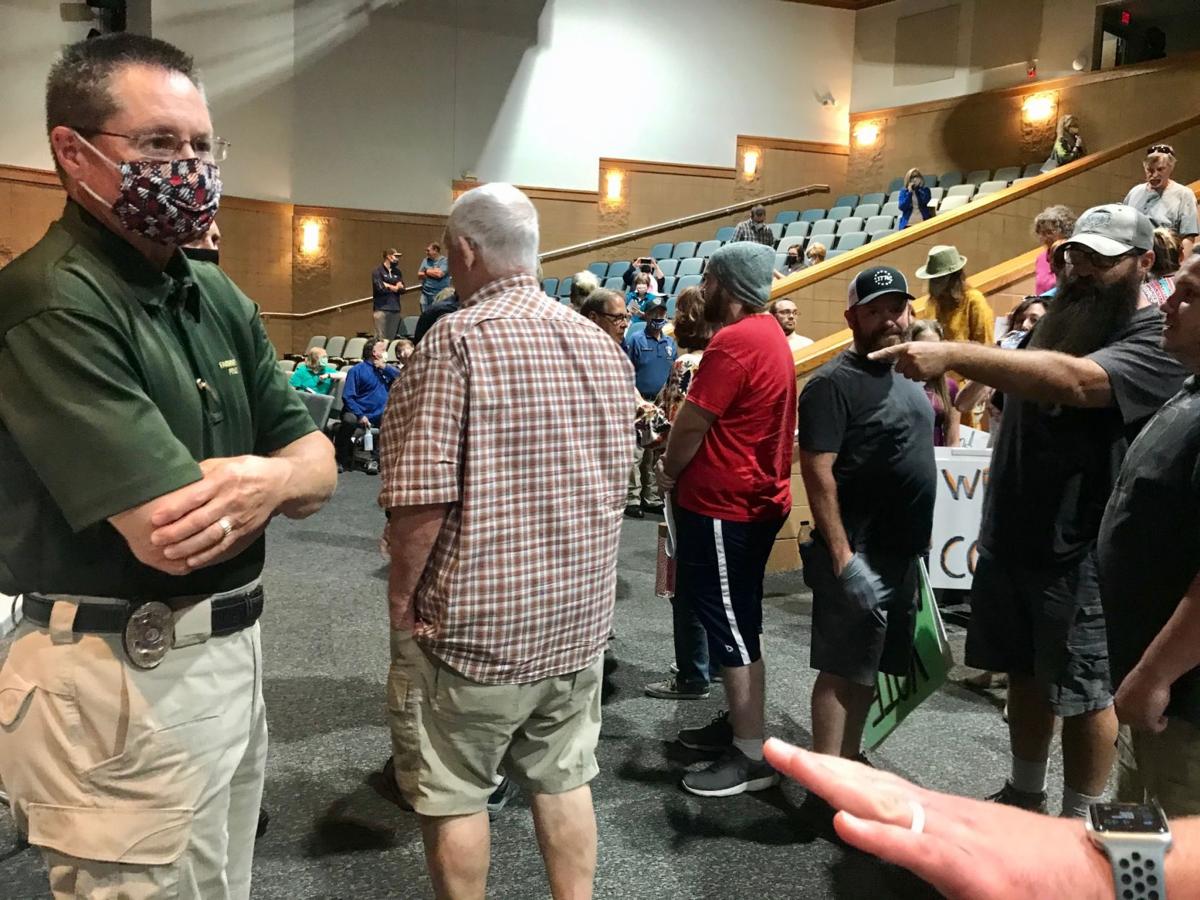 Farmington Police Chief Rick Baker, left, along with a few other officers begins to move between the health board and some of the more boisterous and vocal members of the anti-mandate crowd. 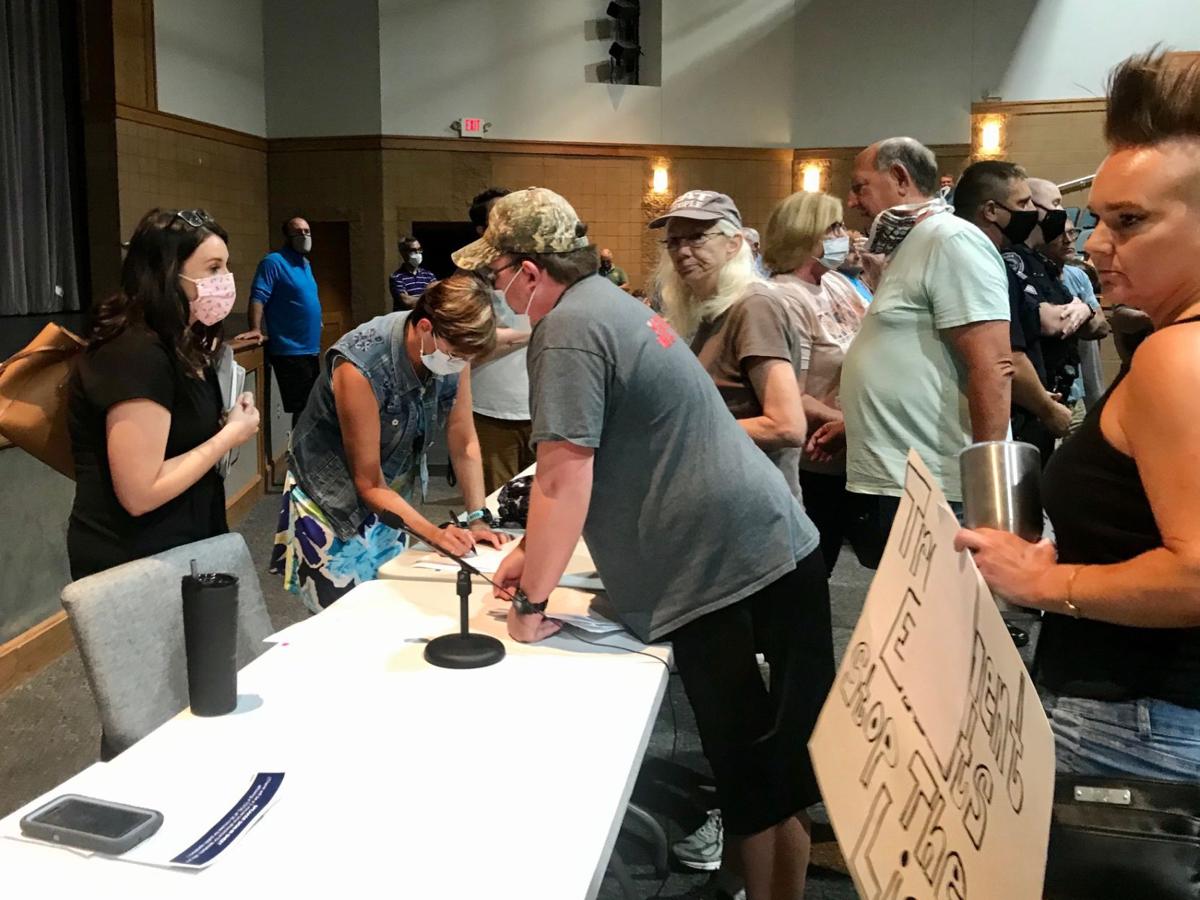 Amber Elliott, county health center director, left, answers questions from the public following the Tuesday meeting at the Centene Center in Farmington. Some residents are trying to challenge the mandate including one who has filed a petition on Facebook.