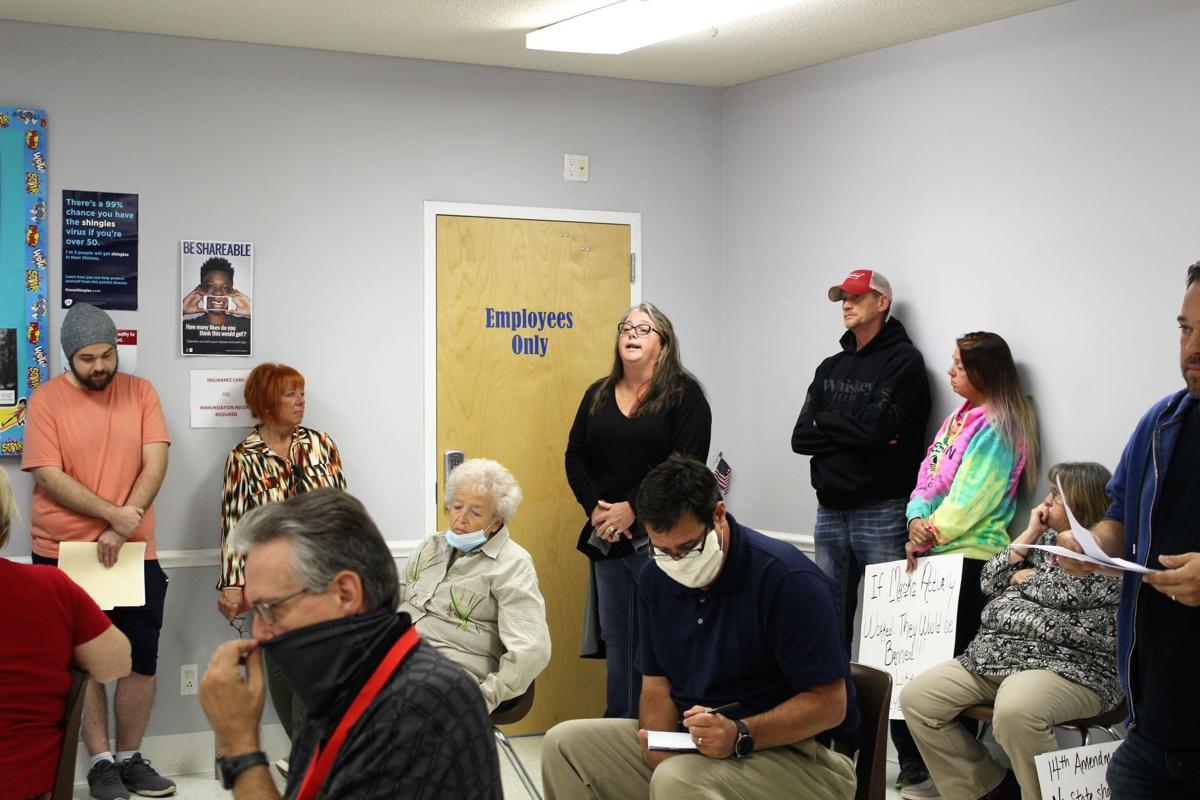 Anna Bond comments against the mask mandate during the St. Francois County Health Center Board of Trustees special meeting on Monday. 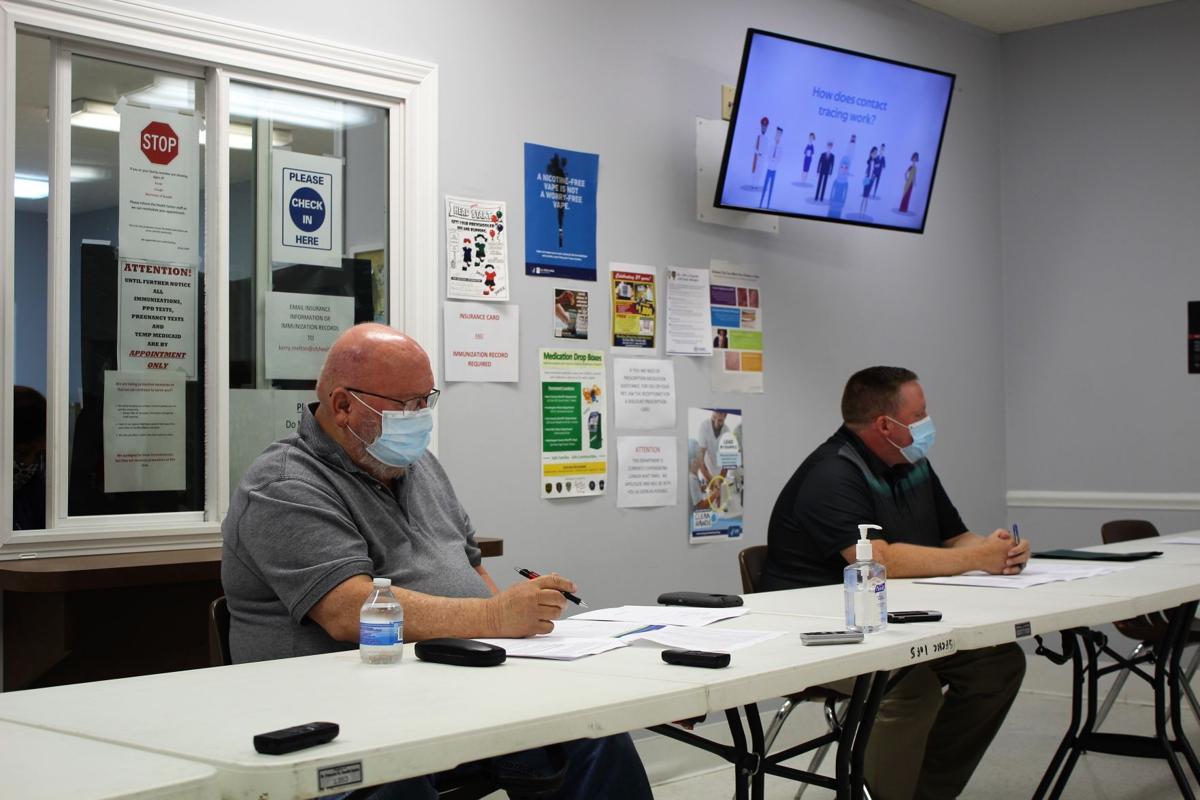 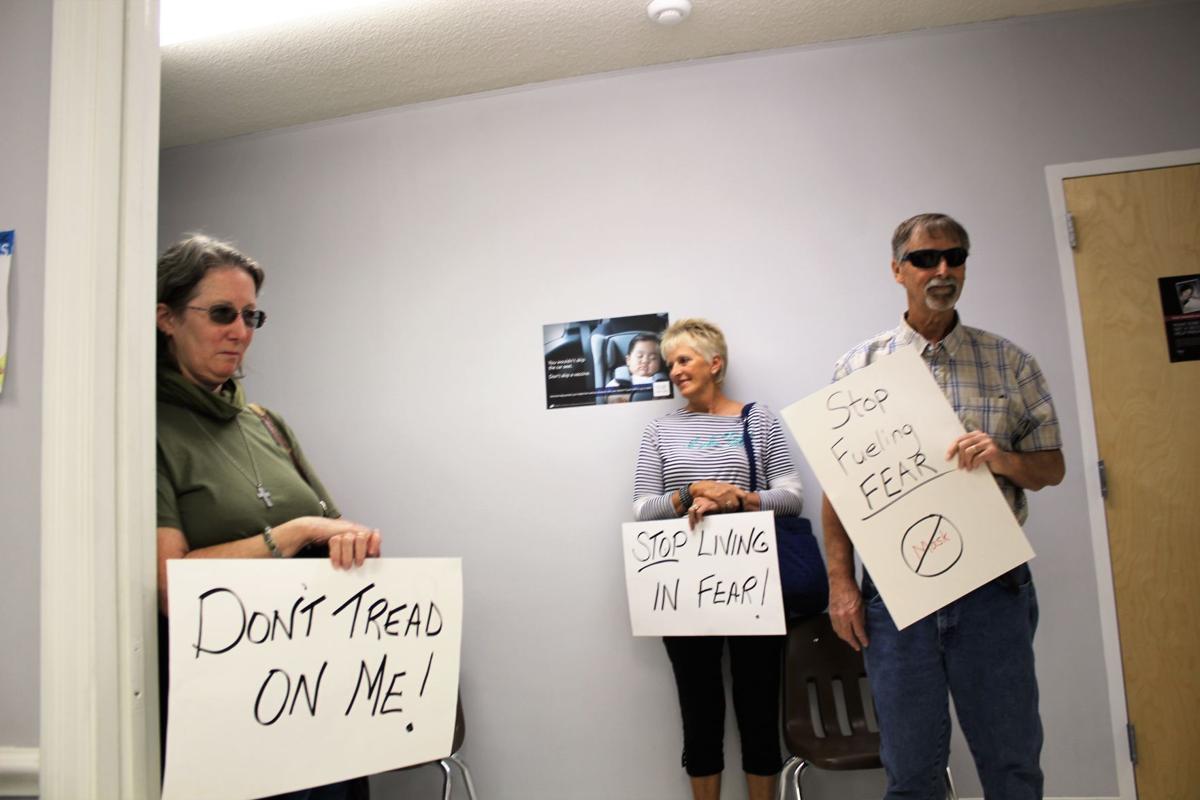 Residents who oppose the mask mandate attend the St. Francois County Health Center Board of Trustees special meeting on Monday.

The St. Francois County Health Center Board of Trustees unanimously passed amendments to the mask mandate during Monday’s special meeting at the health center. The board had passed the mandate 3-1 on Sept. 15 amid vocal protests and some support.

According to the health center, the amendments included the following:

Poston said the health center's attorney, Rick Harris, worked with the attorney who issued a press release against the mandate, Tom Burcham, to achieve consensus on the revisions to the application and enforcement section.

The amended mandate also includes clarifications to the ages in the provisions section. Face coverings must be worn by residents ages 9 and over, the mandate says. Children ages 0-8 are exempt, but those ages 3-8 are encouraged to wear a face covering when in the direct supervision of an adult.

Also in the provisions section, they added "persons gathering at personal residences" under exemptions and added the word "authorize" to number four. It now reads, "businesses are authorized to deny entry to members of the public who refuse to wear face coverings."

The countywide mandate took effect on Monday and runs through Oct. 22, the board’s next meeting.

But many of those in attendance at Monday's special board meeting were opposed to the mandate and were upset that only three out of the five county health board members were present.

Dr. Victoria Damba, who voted against the mandate last Tuesday, and Jodi Bannister, who also missed last Tuesday's meeting, were said to have indicated they could not attend because of work or family reasons.

A few people commented before the meeting started that the board members' absence was “convenient.”

“It's a shame you scheduled a board meeting when the only person who voted against it cannot be here,” Drew Wheatley said.

There was a public comment period at the start of the meeting. The board allowed 10 people to comment for one minute each.

All 10 people who spoke disagreed with the mandate. At times, the meeting resembled a church service with vocal amens, affirmations and clapping during and after the comments.

Melissa Workman was the first to speak. She brought with her the petition against the mandate that she started after last week’s meeting.

“I'm not here to determine what your motives were,” Workman told the board. “But you certainly did not think this all the way through. You've been reckless and divisive and the simple fact is that the data does not justify this extreme overreach. This petition is the voice of the people in this county. This has over 5,000 signatures on it, which is more than many elections that are held in the county.”

When asked by Poston if she was going to leave a copy of the petition with the board, she said no. She insisted board members could reach out to her if they wanted to see it.

“I'm letting you know that these people aren't going away after today, even if you vote for it and you continue it,” she added.

Joyce Alexander, who indicated she was a former nurse, got the biggest round of applause from the anti-mandate crowd. She said masks aren’t going to help and that people who wear them and then put them in their purse or pocket and then wear them again are just causing contamination.

Once the public comment period was over, the meeting's resemblance to a church service faded away as the affirmations turned into heckling and disruptions during the board’s discussion about the amendments. During the voting period, there were chants of “this is unconstitutional.”

The amended mandate can be read at http://sfchc.org/covid-19-updates/.

Electric bills have been a hot topic in Fredericktown for awhile, with the previous round of bills being no exception. As new meters were bein…

The Wolf Creek Fire Protection Association is attempting the process of becoming a fire protection district.

The St. Francois County Commission awarded Phase II CARES Act funds when it met in regular session Tuesday morning on the third floor of the c…

Tire recycling and absentee voting issues were on the agenda Tuesday morning during the St. Francois County Commission regular session.

The city of Farmington finalized its Christmas plans during a recent regular session.

On Thursday at the Ste. Genevieve County Courthouse, several items were on the agenda for the commission including Pickle Springs and a new po…

Public hearings still to be set for TDL utility sale

Residents of Terre Du Lac are hoping to have their voices heard in a public hearing regarding the potential sale of their water and sewer systems.

Anna Bond comments against the mask mandate during the St. Francois County Health Center Board of Trustees special meeting on Monday.

Residents who oppose the mask mandate attend the St. Francois County Health Center Board of Trustees special meeting on Monday.