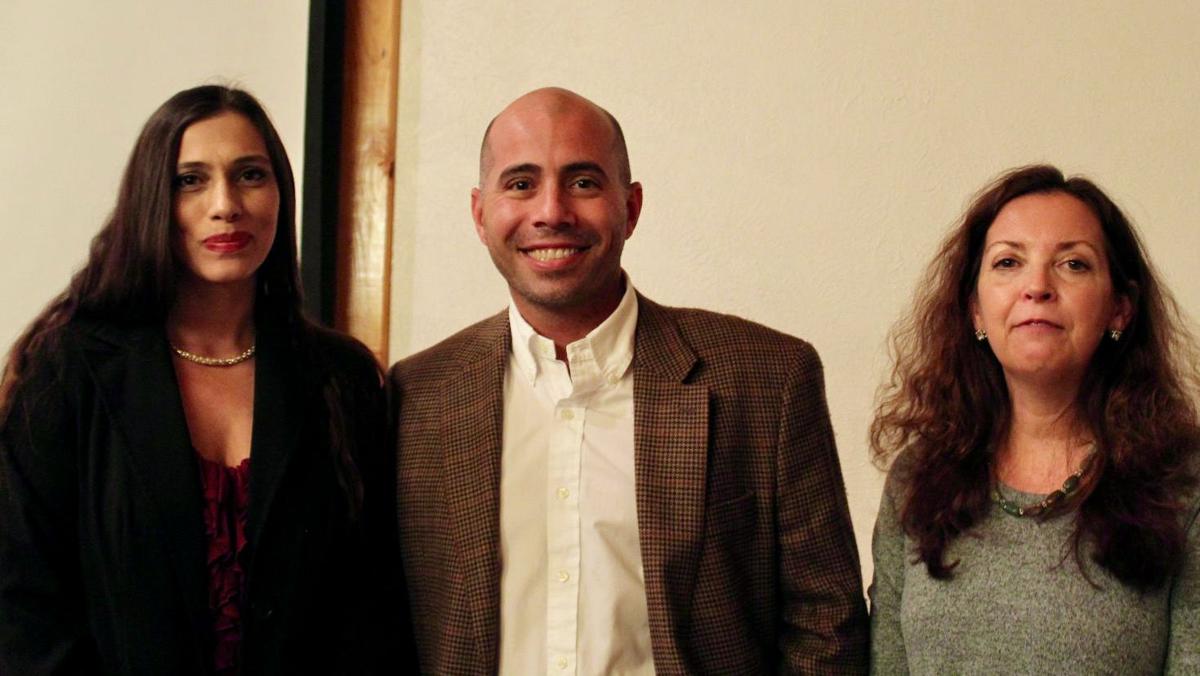 A.J. Koehler of Motion Dog Films, left, is pictured with Dr. Rafael Figueroa and Denelle Smugala who have been working with her on the film "Freedom from Venezuela." 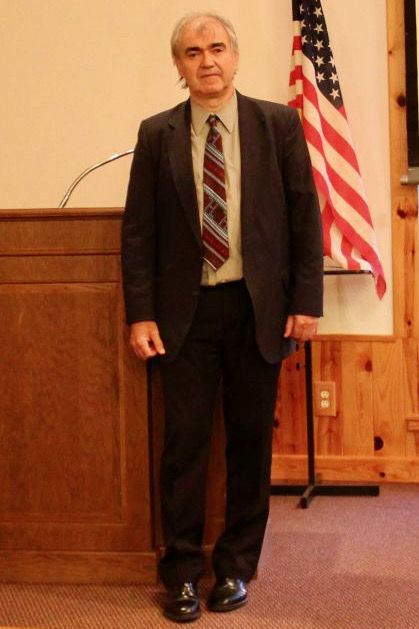 Joe Svoboda, elder at Oak Hill Chapel in Valley Mines shares his experiences of having moved to the United States in 1985, after having escaped from the communist country of Czechoslovakia.

A local firm is developing a feature film about the ongoing political turmoil in Venezuela and its connection with the United States, including the Farmington area itself.

“Freedom from Venezuela” is the work of Thomas and Denelle Smugala and A.J. Koehler of Motion Dog Films who interviewed a large group of Venezuelan immigrants about the changes occurring in the South American country. The film  focuses on the damage done to Venezuela by its socialist leaders. Local physicians Dr. Rafael Figueroa and his wife Carla, natives of Venezuela, figure prominently in the film.

There have been local screenings of the trailers. Oak Hill Chapel in Valles Mines recently held one as well. About 85 attendees listened to the presentation given by several of the principals involved. As an independent film, they are trying to raise funds directly from the public as well as on the Indiegogo.com website.

Koehler, one of the film’s producers, said, “A lot of the interviews that we took are in Farmington. Tom and Denelle [Smugala] actually know Dr. Figueroa and Carla — that’s how this whole thing got started. The Smugalas have a family member who is a foreign exchange student from Venezuela living with them. His name is Guillermo. He was playing soccer with their son, T.J. They were talking to them about things that were going on in Venezuela.

“He asked them about a couple of stories that had gotten taken down and ‘fact checked’ and said that it was wrong about things going on in Venezuela. He asked how much of that is actually right. They started talking about actually what’s going on down there. In Dr. Figueroa and Carla's case, they moved up here right around the time things started going downhill. They’ve been back several times to visit and the difference is staggering.”

Koehler said the physicians directed the producers to other Venezuelan immigrants living in the area.

“There’s a whole community of legal immigrants in this area,” she said. “They are some of the most patriotic people that you will meet. It’s easy to take it for granted, not realizing how bad it is in other places. America is very unique with its form of government — having a constitutional republic that utilizes the democratic process.

“I can see how your entire life spent somewhere else, you never knew those rights, those freedoms, the right to speak; I could see this being a heaven or utopia for those individuals. Seeing it through their eyes has really made me fall in love with this country again.”

According to Koehler, the meeting at Oak Hill Chapel came about due to a previous meeting with the elder of the church, Joe Svoboda.

“We met Joe at a ‘Back the Blue’ rally we went to,” she said. “We were trying to get some good feedback on free speech. We had a really good interview with him.”

A native of Czechoslovakia, now the Czech Republic, Svoboda was born in 1958 and escaped the country in 1985. At that time, the country was part of the Eastern Bloc of communist countries dominated by the Soviet Union. He spoke first and introduced the guest speakers.

“I got enrolled in this project by accident,” he said. “I went to a rally in Farmington — and A.J. and Tom. I started talking to them and someone said, ‘this guy’s a refugee too.’ We had a great time. This documentary is not only about Venezuela. This documentary is about evil and socialism. Socialism is the system that suppresses the basic rights of the people to be free. To worship their God as they please."

During the presentation, Koehler noted that it was a little heart wrenching but very inspiring when you see freedom through the eyes of those who’ve lived without it. She went on to explain some of the film’s key points and why it was created.

"Now, by us insinuating that a collective or socialist society is not ideal, we were going against a very strong narrative that’s being pressured on people like me. It’s just one of the many ways that our basic freedoms are being oppressed already. But, it's nothing compared to what the people of Venezuela have been going through for the past 20 years.

“The question is, what does Venezuela have to do with us? Nothing, and everything. We make comedies. [Tom Smugala] said, this film is going to be about keeping the free exchange of ideas legal in the United States. All we’re going to do is ask some Venezuelan immigrants whether or not socialism is a good idea for America.

"A lot of them are very professional people. Doctors, teachers, business owners — educated people who either saw this coming and left, or tried to stay and help their country and struggled so greatly that they were forced to flee, seeking protection through political asylum.”

Describing what the filmmakers discovered as the project progressed, Koehler expressed shock at what happened to Venezuela.

“What we discovered is absolutely eye-opening,” she said. “The false promises, and the same policies that were followed in Nazi Germany and Russia being implemented. The total destruction of a once free country, a once rich economy and a once proud people. The most shocking thing we discovered of all is how close we are to repeating that exact same story right here in the United States.”

Freedom from Venezuela has already been filmed and edited. The group is trying to raise money now to have color and sound correction done to the film and have the finished result put onto internet streaming platforms.

“Our crew from Venezuela risked beatings, imprisonment and death to get the Caracas footage,” Koehler said. “Right now, it is illegal to take footage down there and send it out of the country. They don’t want people really knowing what socialism really looks like.

“Venezuela was in the same place we are right now 20 years ago. By accident, they voted away their freedom. In the words of Dr. Figueroa, ‘It’s going to take decades to get out of that, if they do.’”

Figueroa addressed the crowd about his childhood in Venezuela and how it has changed since he left.

“I grew up happy,” he said. “Like every other country it had problems, but we were OK,” he said. “It was one of the top oil producing countries in the world. Then initially, there were differences, issues, people wanted a change. That change translated into let’s vote for something different. That was socialism. It was phrased as the ‘new socialism’, not the old one. It’s a new concept.

“Shortly after, things started to change to a way that was not what they said it was going to be. This is different. They changed the constitution to stay longer in power, to promote reelection. They owned the voting system, so we knew the voting was fake. There’s been 30 elections in 20 years. They’ve won every one of them, with millions of people protesting in the streets. It was a gradual thing, little by little, and eventually it was about staying in power and not caring anymore.”

Figueroa said that emigration from Venezuela has been massive over the past 10 years with more than six million professionals leaving the country. Of his 300 medical classmates, he estimated that five or fewer remain in the country.

The Farmington Police Department is investigating the death of 44-year-old Anne Marie Whittle of Farmington.

A.J. Koehler of Motion Dog Films, left, is pictured with Dr. Rafael Figueroa and Denelle Smugala who have been working with her on the film "Freedom from Venezuela."

Joe Svoboda, elder at Oak Hill Chapel in Valley Mines shares his experiences of having moved to the United States in 1985, after having escaped from the communist country of Czechoslovakia.