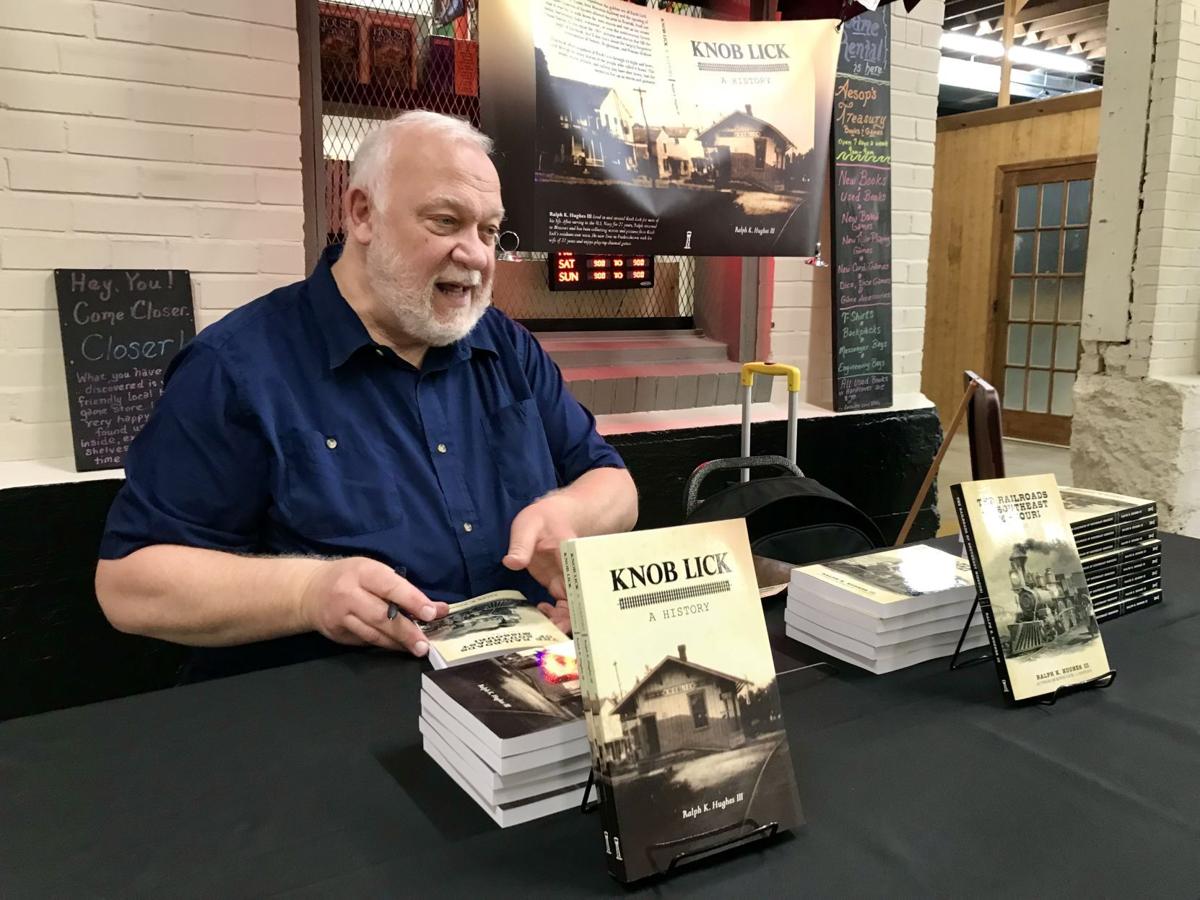 Ralph Hughes has a friendly chat as he signs his eighth book sold at Aesop's Treasury on Saturday. Hughes, who has already written about Knob Lick, is planning on additional books about Southeast Missouri trains. 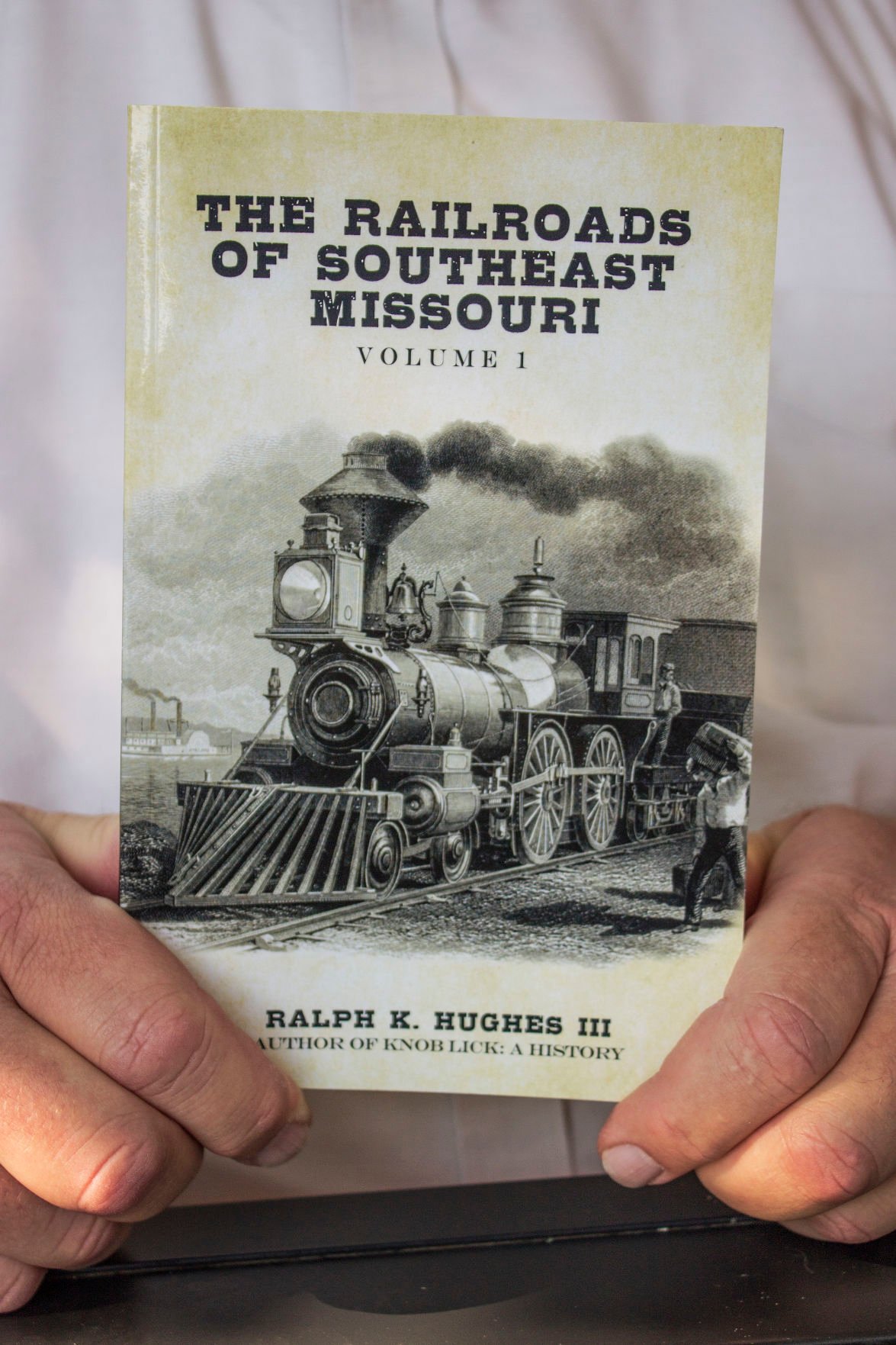 When Hughes wrote about Knob Lick, it brought back memories from when he was a kid and loved trains.

The lonesome, deep sound of a train whistle in the still of the night is something Ralph Hughes III vividly recalls. It was an intriguing sound for a young boy who often stayed with his Grandmother Hughes in Knob Lick.

He grew up hearing stories of trains. One story in particular weighed heavily on him. Hughes heard his grandmother's story about his paternal great-grandfather, Corum Acuff, who was the section foreman at Knob Lick for the St. Louis, Iron Mountain and Southern Railway, and who met his end in 1931 when a train hit the motorcar in which he was riding.

Hughes said it’s these personal stories that drive his curiosity about train history.

Even though he grew up near trains, Hughes did not ride one until 1975 when he traveled from St. Louis to Chicago for boot camp.

He recalled a more meaningful trip when he and wife Maria took their three children to a train museum in the California desert. Their son, Corum, who was about 5 years old at the time, loved trains.

“As I was carrying him around the various trains they had on exhibit,” Hughes said, “he kept saying, ‘Train, Daddy, train.’”

When Hughes turned his head away from where Corum was looking, his son quickly grabbed his father’s face and excitedly exclaimed, “Train, Daddy, train!”

“To watch his face as we rode the train that day, looking out the window at the passing countryside, was something I will never forget,” he said.

Hughes, a Fredericktown resident, has always been interested in history and writing about it. In fact, he devoted 20 years of his life to research the first book he wrote about the town in which both sides of his family resided, “Knob Lick: A History.” He said people of the Parkland would be surprised if they realized how much history this area holds.

With his second book, his research has shifted from Knob Lick to railroads.

When Hughes wrote about Knob Lick, it brought back memories from when he was a kid and loved trains. After he decided to write his second book on a brand-new topic — the railroads of St. Francois County — Hughes’ friend Melvin Henson suggested he should instead focus on the railroads of Southeast Missouri.

Once Hughes began his research, he learned about 50 railroads had at one point existed in the area. He acquired more than 100 photographs from many sources including museums, historical societies and libraries. Many people shared their personal collections of photographs, including Bill Bunch of Bonne Terre, Don Ross of Texas, Don Beckerman’s family of Bonne Terre, and Jack Crouch’s wife Kathy, who allowed Hughes to access his notes on the St. Francois County Electric Railway.

“When I wrote to the individuals, I would start the letter with, ‘How would you like to help me tell a story?’” said Hughes. “They were more than happy to help me, and I owe them a great deal of gratitude.”

Hughes said he found out a lot about the area in which he grew up. He discovered some of the railroads did not get fully built due to lack of finances, but he wanted to include or at least mention them in his book. He also got a better look at the people who worked so hard to build the railroads.

Hughes learned about the last of the Irish and Chinese immigrants “who, if it were not for them, the Transcontinental Railroad would not have been built, and (learned about) the little recognition they received for their sacrifices. A lot of them lost their lives building the railroad.”

Out of the four major Missouri railroads, Hughes said, the most interesting to him was the St. Louis, Iron Mountain and Southern Railway because of his family associations with it and the fact that it ran through Knob Lick and Fredericktown, where he now lives.

He found other railroads fascinating, including the St. Francois County Electric Railway. According to Hughes, the town of Farmington built it themselves because they had lost the opportunity for the steam railroads to come through their town.

Another story that fascinated Hughes was “the Mississippi River and Bonne Terre Railroad, for its contribution to the mining industry of St. Francois County.”

“There are a lot of great pictures to go with the stories,” said Hughes. “I never tire of looking at the pictures.”

Hughes took about two years to write his new book. Even though that project has now been published and he’s in the process of introducing it to the public, he’s still been working “full-steam ahead.” He’s wrapping up Volume 2 of his railroad research so his son, Corum, who edits all of his father’s writing, can now proof his soon-to-be third book. Corum just began editing the Volume 2 while Hughes is working on Volumes III and IV together to figure out how to break them into the two volumes.

Topics included in the second railroad book include the St. Francois County Railroad, which was the electric railroad that connected Farmington to Flat River and Bismarck.

Although researching the topics of his books has been a tedious process, it’s one Hughes has come to enjoy.

“I sometimes read a thousand newspaper articles to find two sentences in an article that help you tell the story,” he said. “It’s a long process, but I’ve come to love the challenge.”

Hughes is working on volumes III and IV at the same time so he can see how best to split up the information. Then, he plans to write a book on how the railroads were used during the Civil War. He’s also planning a second book on Knob Lick, which will include stories shared with him by people who read his first book.

People can still purchase Hughes’ book “Knob Lick: A History” for $18 including shipping, and special Knob Lick calendars for the same price. The books and calendars can also be purchased from Aesop’s Treasury at the Factory in Farmington, where Hughes held a book-signing on Saturday. Within the first half hour, he'd sold seven books, he said.

Hughes is available to visit with local historical societies and libraries to discuss his books. Contact him at 573-701-4129 or by email at RalphHughes14@gmail.com to schedule him as a speaker or to purchase books or calendars.

Pam Clifton is a contributing writer for the Daily Journal.

Always a big draw, a large crowd turned out for the reenactment of the Battle of Pilot Knob which took place Saturday and Sunday at Fort David…

We asked our readers to share their own memories of Sept. 11, 2001 – that tragic day when almost 3,000 people were killed in terrorist attacks.

9/11: A memory for teachers, history for students

This past week, area students sat in classrooms learning about the events of Sept. 11, 2001 in history lessons.

Ste. Genevieve was the scene of the US Army taking over the county courthouse and instituting martial law Saturday morning — 158 years ago.

Ralph Hughes has a friendly chat as he signs his eighth book sold at Aesop's Treasury on Saturday. Hughes, who has already written about Knob Lick, is planning on additional books about Southeast Missouri trains.

When Hughes wrote about Knob Lick, it brought back memories from when he was a kid and loved trains.