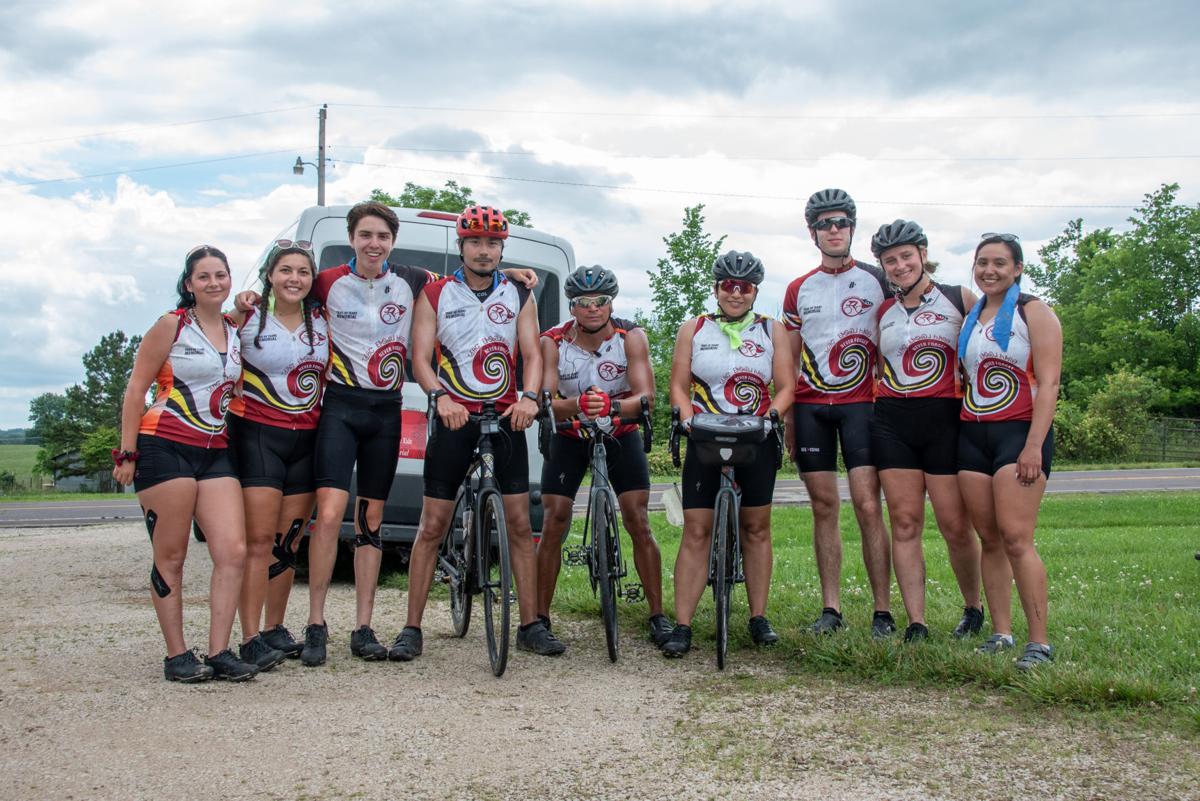 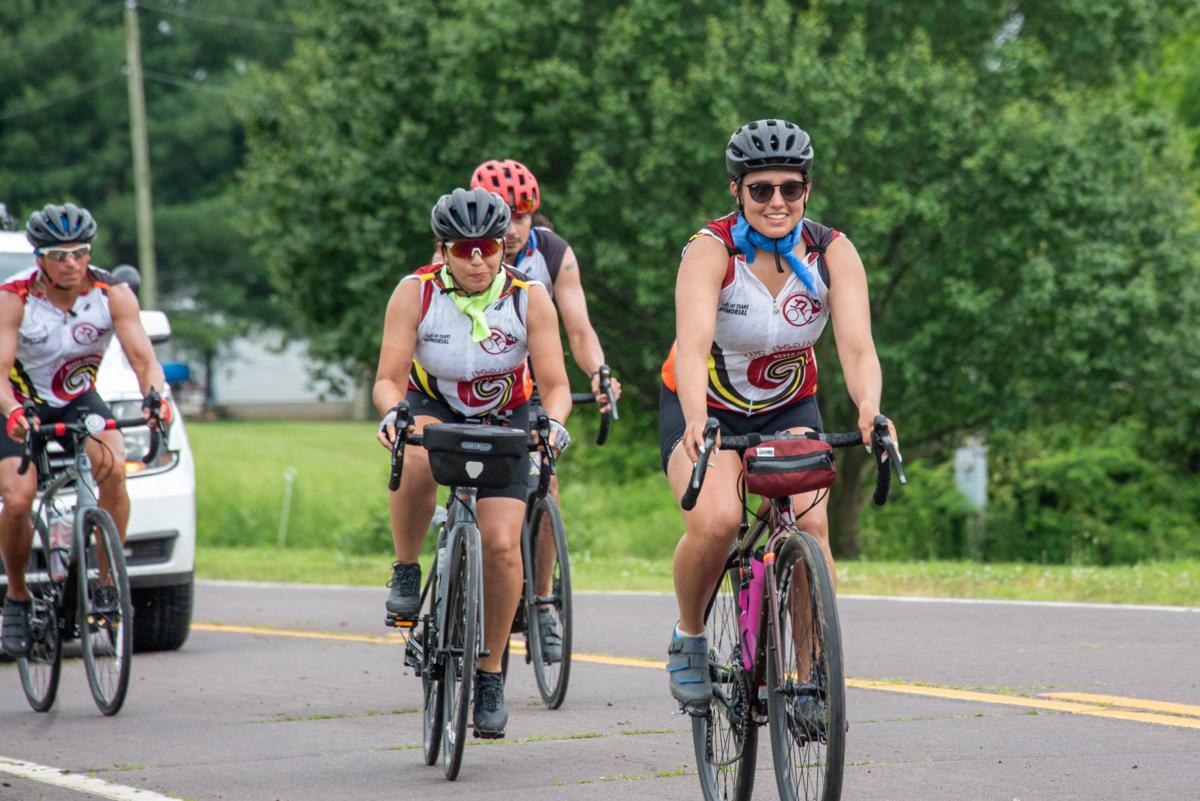 Cherokee Indians cyclist Raylen Bark gives a huge smile as she continues north on Hwy OO with the rest of the group on the Remember the Removal Bike Ride. 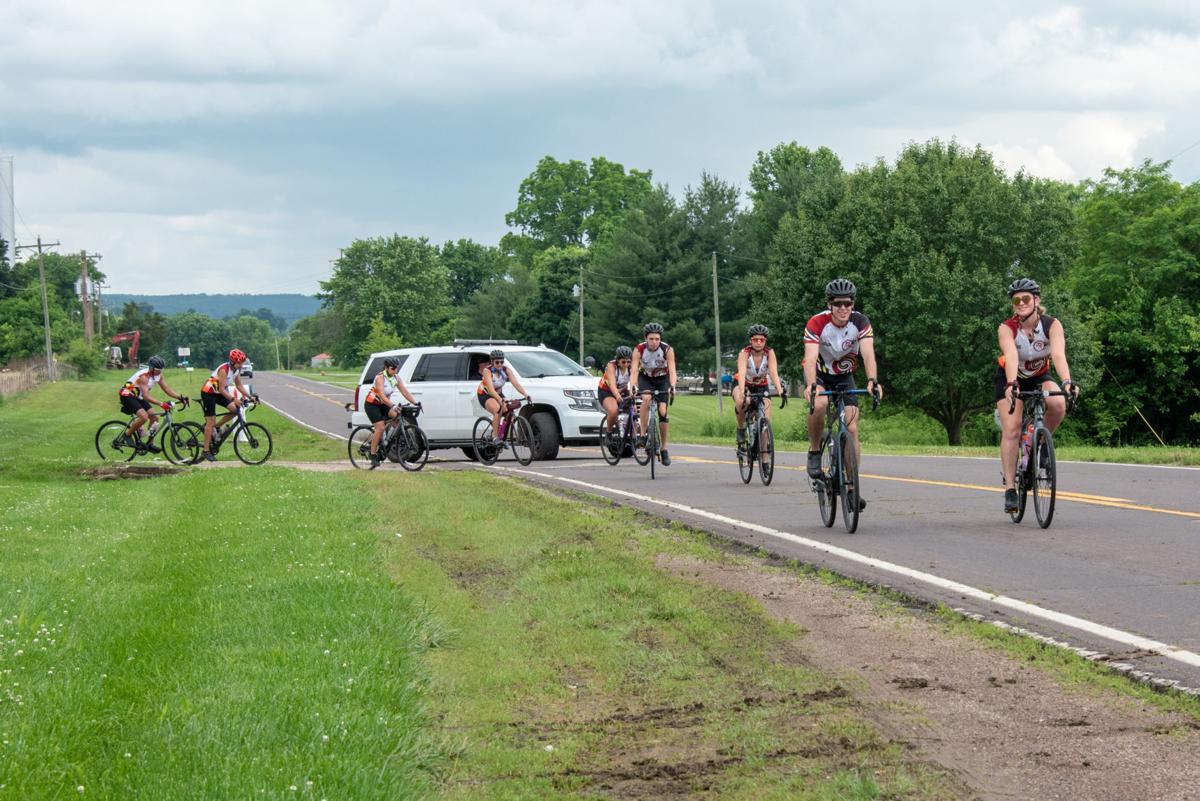 The nine cyclists on the Remember the Removal Bike Ride pass through Fredericktown on their 950-mile journey along the Trail of Tears as they continue north on Hwy OO toward Farmington on June 9.

Each year, a group of Cherokee descendants take the 950-mile journey along the Trail of Tears to follow the path their ancestors made on foot. The trip is called the Remember the Removal Bike Ride.

The group of nine cyclists rode through Fredericktown and Farmington earlier this month as they neared the halfway mark of their journey, completing 74 miles that day. They finished their ride in Tahlequah, Oklahoma, on June 18.

The group, which is usually around 20 cyclists, was kept smaller this year due to the COVID-19 pandemic. According to a press release, all cyclists and staff received COVID-19 vaccinations and were following safety guidance from the CDC during the ride. They were also being accompanied by trained medical staff.

The annual ride allows young Cherokees to retrace the northern route of the Trail of Tears on bicycles. Their journey spans from Georgia to Tennessee, Kentucky, Illinois, Missouri, Arkansas and Oklahoma.

The cyclists traveled an average of 60 miles per day. According to a press release from Cherokee Nation, of the estimated 16,000 Cherokees forced to make the journey to Indian Territory in 1838 and 1839, about 4,000 died from starvation and exposure to the elements and disease.

Cyclists were selected to participate in this experience based on essays, interviews and a physical to ensure they were up for the grueling challenge. As part of their training, the group spends weekends undergoing rigorous physical training and also cycling on a variety of routes.

"Being chosen for the ride was such an emotional experience," Melanie Giang said. "To me it means that I have been given such an honorable position in that we don't only have the chance to learn about our ancestors, but that we also get the chance to relive the trail and reflect on the hardships that our people endured, so we can be better ambassadors for our people."

"The most impactful moment was at Fort Royal, when we walked a section of the Trail of Tears," Giang said. "Hearing my footsteps and the footsteps of my teammates broke me, as it brought to mind the imagery of our ancestors before us who were forced to walk the same trail."

Giang said that moment really put into perspective for her how they felt as they left their homes and headed toward the unknown.

Shace Duncan, 18, was the youngest cyclist to make the trip.

"At the beginning of the program, I was 16 years old, so being with a lot of college students was very daunting, but I knew it was a challenge I could handle, because I've wanted to do this since I was a child," Duncan said. "Since the program has progressed, all of my teammates have become my family and I could not imagine life without them."

When asked what is one thing he wishes the world knew about Cherokee Nation or about the Remember the Removal Ride, Duncan said, the removal today is greatly sugar-coated, and in reality, the Cherokee people were raped, murdered and herded like animals.

"This ride has definitely brought me closer to my ancestors," Duncan said. "It has shown me how much they struggled and how strong they were, and in turn, shows me how strong I am."

We asked our readers to share their own memories of Sept. 11, 2001 – that tragic day when almost 3,000 people were killed in terrorist attacks.

9/11: A memory for teachers, history for students

This past week, area students sat in classrooms learning about the events of Sept. 11, 2001 in history lessons.

Veterans in Defense of Liberty’s Liberty Riders of America Division is hosting the Third Annual Missouri Vietnam Wall Run 2021, with a leg tha…

Historical game show has you guessing

The Leadington Free Will Baptist Church is celebrating its 100th-year anniversary this Sunday.

Cherokee Indians cyclist Raylen Bark gives a huge smile as she continues north on Hwy OO with the rest of the group on the Remember the Removal Bike Ride.

The nine cyclists on the Remember the Removal Bike Ride pass through Fredericktown on their 950-mile journey along the Trail of Tears as they continue north on Hwy OO toward Farmington on June 9.