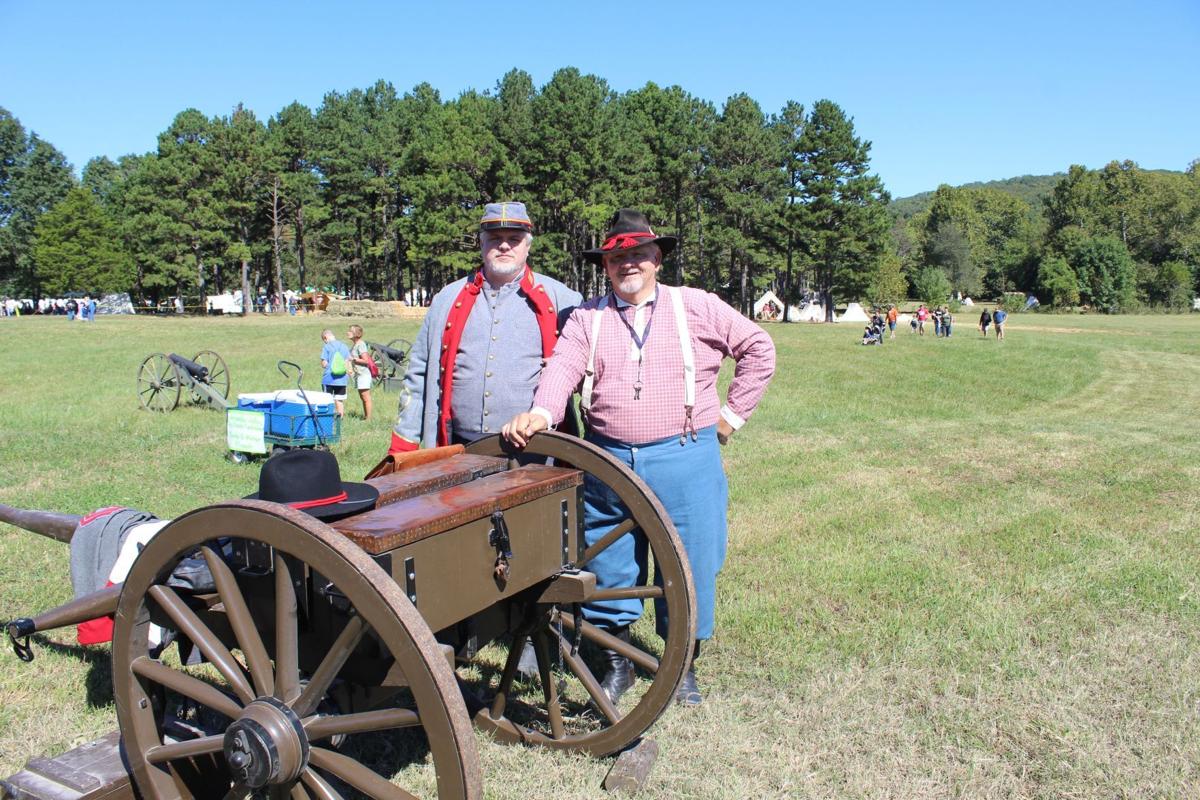 Eric and Hal McNeal from Boonville brought a cannon to the reenactment. Eric portrayed Richard Collins, for whom a battery is named. 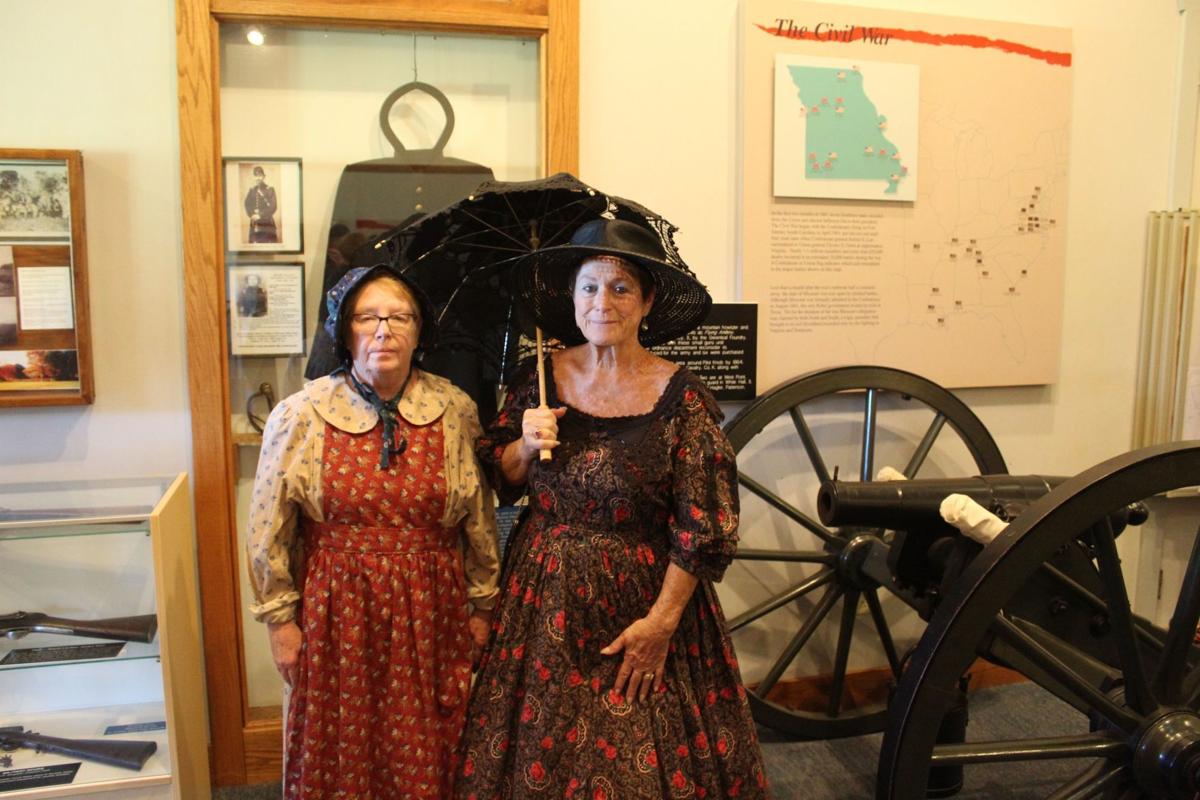 Carole Stark and Char Schmidt came al the way from Arlington, Nebraska for the reenactment. 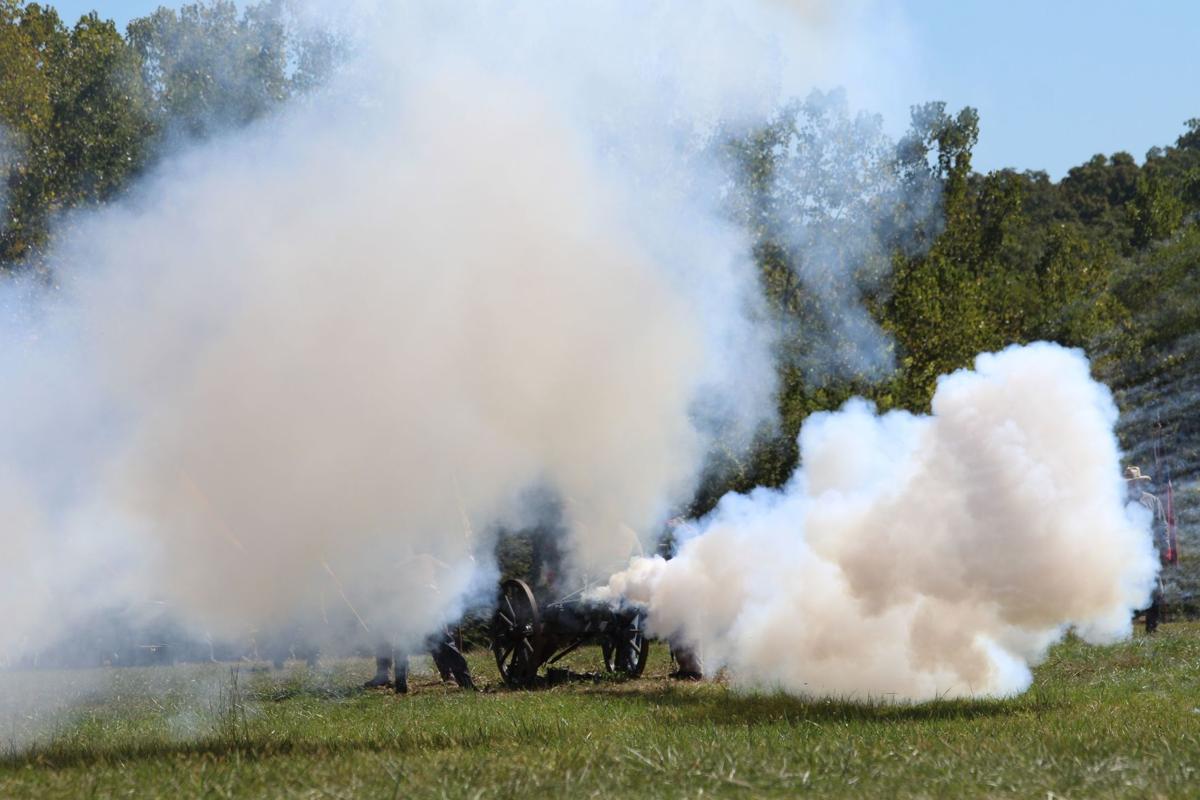 The field of battle was often obscured by smoke from cannon fire at the battle of Pilot Knob. 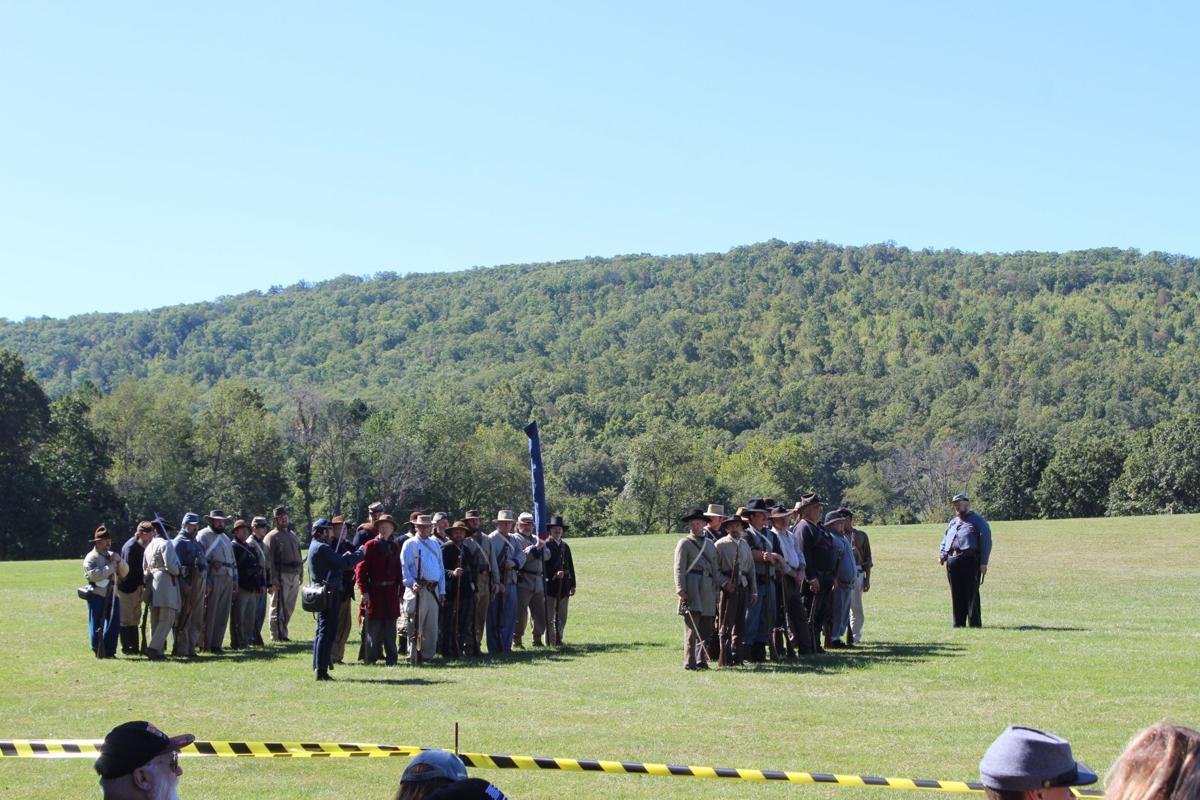 A ragtag group of Confederate soldiers form up to attack.

Always a big draw, a large crowd turned out for the reenactment of the Battle of Pilot Knob which took place Saturday and Sunday at Fort Davidson in Pilot Knob.

The 157th anniversary commemorates the Civil War battle of Sept. 27, 1864, which lasted from about 2-5:30 p.m. According to the Missouri State Parks website, 12,000 Confederate troops under General Sterling Price, former governor of Missouri, attacked Fort Davidson, which was defended by Brigadier General Ewing and 1,500 regular Army, Missouri Home Guard and civilian volunteers.

This weekend, with two days of flawless blue skies and mild temperatures, encampments were set up in the park with reenactors in Union and Confederate regalia explaining military tactics and recreating military life from the era. Ladies strolled around in massive hoop skirts, hats and parasols appropriate to the time.

Reenactors often come long distances to be a part of the “battle”. Alan and Faith Farley are based in Virginia and have been involved with reenactments since 1984. This is the missionaries' first time at Pilot Knob with their ministry. They scheduled a church service at 9 a.m. on Sunday at their outdoor chapel in the park.

“My wife and I are full-time missionaries and this is our missionary field,” Farley said. “We are here telling the story of the United States Christian Commission and the work that they did to help the temporal and spiritual needs of the soldiers. With us, we have some display cases of some of the things they gave the soldiers by the tens of thousands.”

The Farleys also brought with them a wagon that provided a refreshment many people take for granted today — coffee.

“We also have a reproduction of a coffee wagon which, during the war, would do 108 gallons of coffee an hour,” he said. “Ours was made by the Chase and Sanborn Company in 1961 to help celebrate the hundredth anniversary of the war. We are in the process of restoring it while we are making coffee and giving it away.

“Before the Covid, my wife and I had used to do about 25 reenactments a year and travelled a little over 30,000 miles. Between now and the end of November we still have seven events to do.”

Hal McNeal and his son Eric of Boonville took part in the battle with their cannon. They are part of a group of reenactors from Central Missouri and were acting as Confederates as part of the Collins Battery, named after Missourian Richard Collins.

Hal explained the duties of each crew member and pointed to the two in front. “The two men in front had about a 30-second life expectancy when it came to battles, because those were men that (the enemy) would fire at. Most batteries average between 80-100 men. Every man is cross-trained. Usually in a battery, you would have four to six guns, so you would have 20-25 guys per gun," he said.

According to Hal, everything used was simple, basic and often interchangeable.

“If you had a 12-pound Mountain Howitzer (shooting) from there and the ball hits on the ground, you actually could pick it up and fire it back,” he said. “It is a smooth bore, anything that could be fit down that barrel could be fired. It’s a giant shotgun, you could use rocks, knives and forks or chains. It was not a ‘Civil' war by any means, it was messy.”

Eric portrayed Richard Collins for the reenactment. He explained the Collins Battery was actually never at Pilot Knob.

“They had gone off with Shelby and went to Fredericktown and then to Potosi,” he said. “They were at Potosi on the same day that this happened.”

Closer to home and acting on the Union side, Scott House is from Cape Girardeau. He was part of the 47th Missouri Infantry Regiment. Some of the men reenacting in the 47th are from Ste. Genevieve, St. Francois and Bollinger counties, with many of them having ancestors in the unit.

“We’re representing the 47th Missouri, which was local men,” House said. “The 47th was formed in advance of Price’s invasion of Missouri. There were units from each county: Washington, St. Francois, Ste. Genevieve, Perry, Madison, Iron and Wayne county. Iron and Madison had one company each of 100 men. Wayne County supplied 300 men, or three companies' worth.”

House stressed the importance of the regiment consisting of local men serving in the unit.

“These were local men fighting, they were opposed to secession and chaos, they were fighting for their rights here,” he said. “A lot of people get that wrong, they think it was a lot of Yankees in this fort. There were men from the Missouri State Militia. There were 140 men from the 14th Iowa, which were the only men from outside of Missouri here. What we try to do in representing the 47th Missouri is keep that tradition alive.”

What comes next in NY's investigation of Trump

Eric and Hal McNeal from Boonville brought a cannon to the reenactment. Eric portrayed Richard Collins, for whom a battery is named.

Carole Stark and Char Schmidt came al the way from Arlington, Nebraska for the reenactment.

The field of battle was often obscured by smoke from cannon fire at the battle of Pilot Knob.

A ragtag group of Confederate soldiers form up to attack.