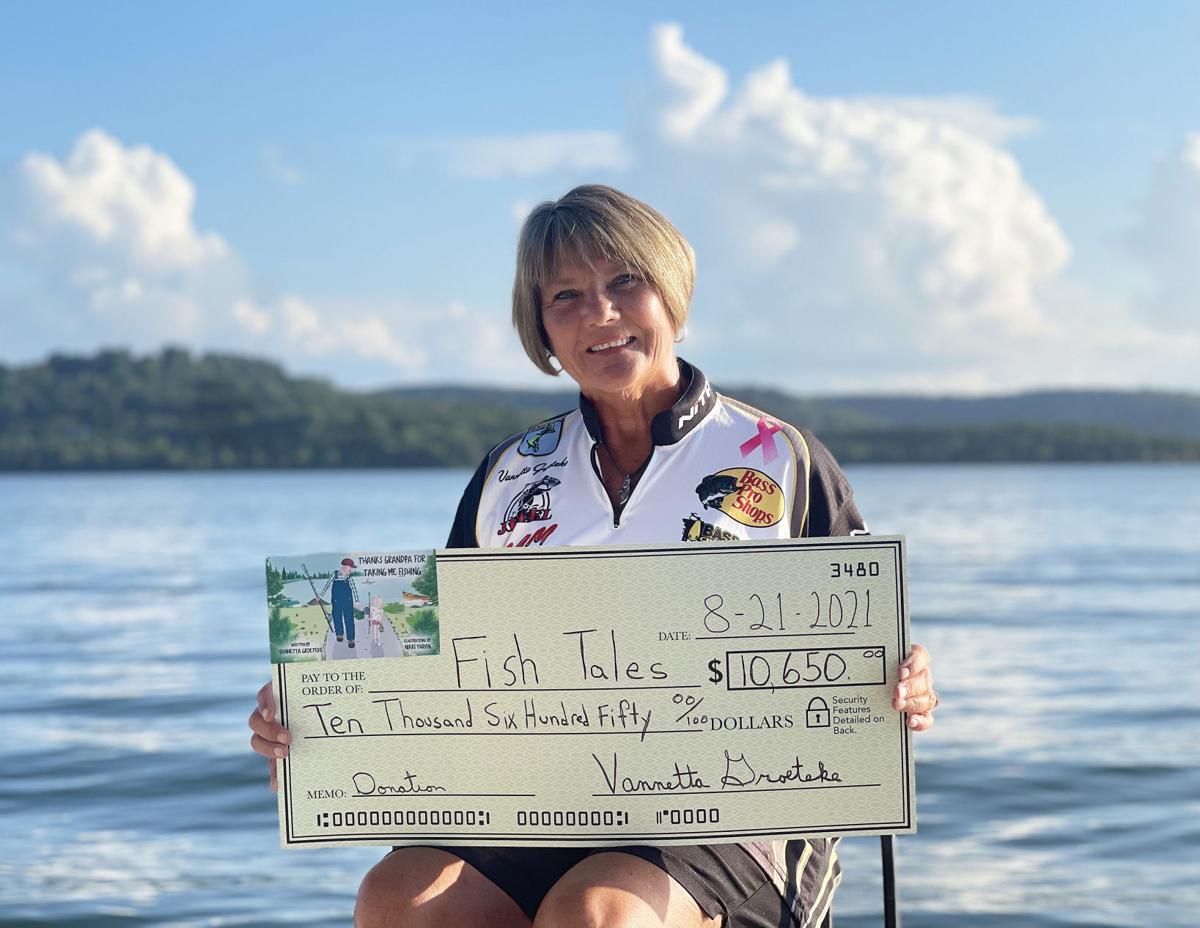 Author Vannetta Groeteke is very excited to present a check to Fish Tales this weekend. 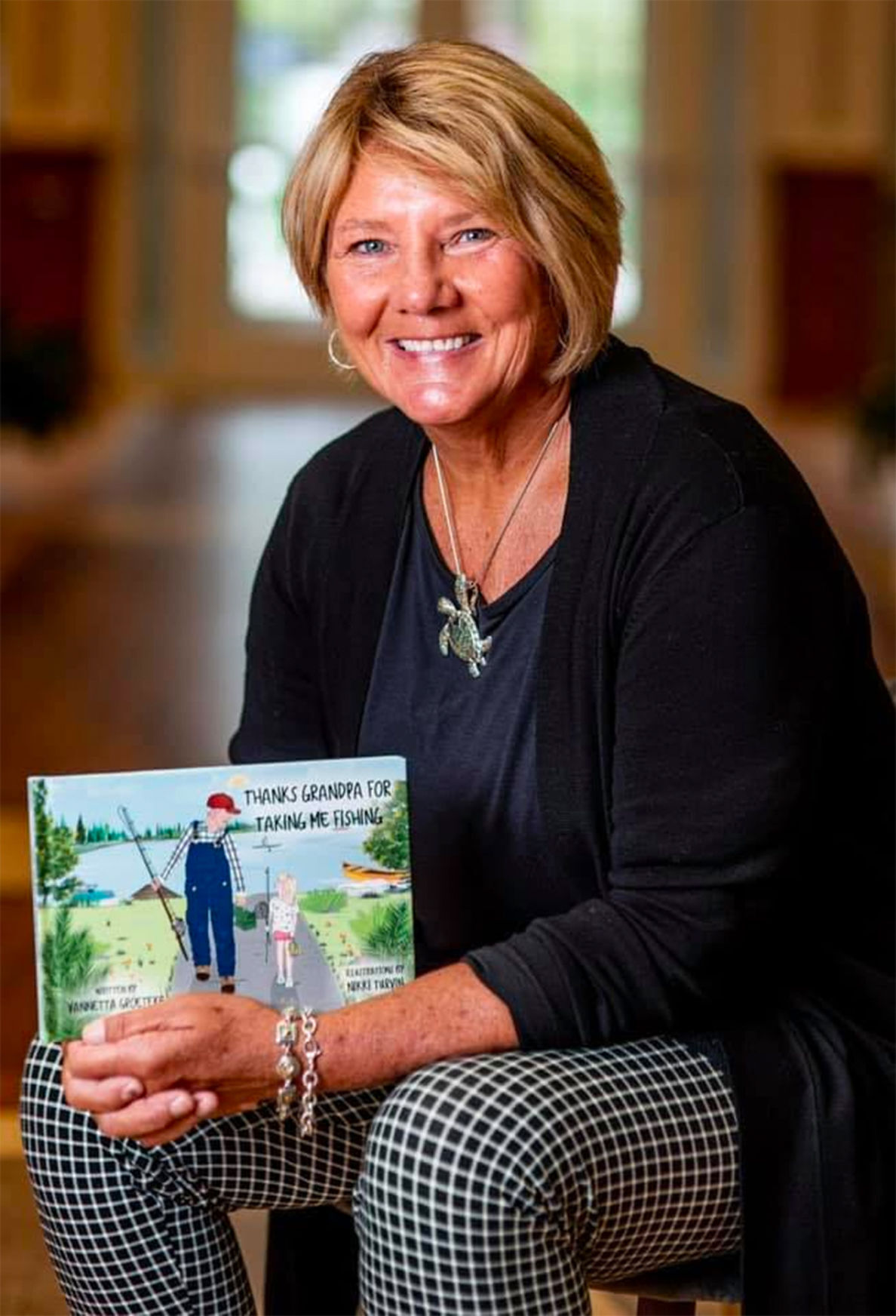 Vannetta (Stevens) Groeteke holds a copy of her book that she wrote to help a charity called Fish Tales.

Saturday is the day Vannetta (Stevens) Groeteke has been anticipating for more than a year. She’s especially excited because she is giving away $10,650 that day during the Fish Tales 11th annual Benefit Bass Tournament for Disabled Youth Hunts & Fishing.

Groeteke is presenting the check to JP Sell at Table Rock Resorts at OHoys boat ramp in Kimberling City, the weigh-in site for the fishing tournament.

Groeteke’s story began when she was a young girl living in St. Francois County. She went fishing with her grandparents often, but she never gave it much thought that she would one day write a book about their adventures together.

Years after her grandparents Gilbert “Gib” and Retta Stevens, of Doe Run, have passed away, Groeteke cherishes her time spent with them. She recalls traditions and history passed down from her grandparents that she has since passed on to her own children and grandchildren.

These experiences – lovingly shared together – are far greater than any monetary amount.

Out of all the time spent with her grandparents, Groeteke loved to fish with them. Now, as a grandmother herself, she has fondly recalled many of these wonderful memories with her beloved grandparents in the book she wrote titled “Thanks Grandpa for Taking Me Fishing.”

The inspiration to write the book came Groeteke’s desire to help local special-needs children and veterans to enjoy outdoor activities that would otherwise be impossible. All of Groeteke’s profits from the sale of her book are being donated to the organization Fish Tales.

The children’s book author grew up in the Parkland. She graduated from Farmington High School in 1974 and Mineral Area College in 1976. Soon after, she moved to Springfield to attend college.

She married husband Gary in 1980. They have two sons, Ryan and Brett, and six granddaughters Madison, Addison, Kinsley, Jaycelyn, Brilee and Ava.

Even though Groeteke moved away from the area, she returns several times a year to visit her family and friends.

“I am very proud of being from such a wonderful community and even prouder of what it has become,” she said.

Groeteke said when she was growing up, she never thought she would write a book one day. However, the special memory of when she helped a little girl catch her first fish has been on her mind for years. When the opportunity came up for her to become involved with Fish Tales to help special needs children, she considered writing down the story that changed the life of that little girl and certainly hers.

“I look forward to presenting my check to Fish Tales,” she said. “I know the money will go to good use for special equipment and events that are needed.”

When she participated in the Fish Tales benefit fishing tournament about a year ago, she watched her friend JP work hard to make the event a success so he could provide special-needs children and veterans with an opportunity to enjoy activities they would otherwise not be able to enjoy.

“I knew I wanted to help somehow,” she said, “so I decided to write a children’s book and donate all my profits to Fish Tales.”

She said the process of completing the book was “a tremendous amount of work but nothing compared to the work that JP does for our community.”

“I am honored that my little story about Grandpa and I fishing has brought so much joy and fond memories to all those that have read my book,” said Groeteke. “I am extremely proud and honored to present a check to Fish Tales.”

Groeteke’s love for fishing didn’t stop with her grandparents. Years later when her son Ryan was 15, he became involved in fishing tournaments. Later, he told his mother that she was actually a better fisherman than many of the men he had competed against. So, he asked her to complete with him. At first, she declined because there were no other women in the area who fished competitively.

In 2011, Groeteke changed her mind. She competed and won her first major fishing championship on Bull Shoals Lake. She was the only female and won the championship as a co-angler.

Since then, she has competed in many bass fishing tournaments throughout the nation. Now, she can usually be found fishing a few tournaments near her home on Table Rock Lake near Branson.

In addition to her success in fishing, Groeteke became one of the first female officials for Major League Fishing just last year. She can be seen on the Discovery Channel, Outdoor Channel and online live at MajorLeagueFishing.com.

“I am so happy to share my book and this very special story with everyone and help support a wonderful organization at the same time,” she said, “and thank you to everyone who has purchased books and to those of you who have made donations.”

Books signed by Groeteke may be purchased directly from her by emailing vgroeteke@gmail.com. They can also purchase a copy locally at Ophelia in Farmington.

An area man was injured in a one-vehicle accident in northern St. Francois County on Tuesday.

A Missouri Lottery Keno ticket purchased for a Nov. 5 drawing at Country Mart, 180 Plaza Dr. in Ste. Genevieve, has won a lucky player a $137,…

Because it did not meet last week, the St. Francois County Commission held a lengthy meeting to deal with a wide variety of housekeeping items…

Author Vannetta Groeteke is very excited to present a check to Fish Tales this weekend.

Vannetta (Stevens) Groeteke holds a copy of her book that she wrote to help a charity called Fish Tales.