At about 7:45 a.m. Tuesday, local law enforcement received a call about an injured bald eagle on US 67 just south of Fredericktown.

Madison County Deputies Steve Robinson and Rick Pogue, along with Missouri State Highway Patrol Trooper Tyler Sappington, came to the eagle's rescue — which was not an easy task as it was scared and appeared to have a broken wing.

Once the deputies and trooper safely secured the bird, they contacted the Missouri Department of Conservation and turned it over to Conservation Agent Alan Lamb.

"His wing is broken, it is pretty obvious," Lamb said. "The way the typical wing folds in is kind of towards his chest. His wing is spun around backwards with a bone protruding through it."

Lamb said this injury is something that could happen from the bird being hit by a vehicle. He said once the veterinarian looks at it, they will decide whether it can be splinted or not.

"They (specialized veterinarians) can do some pretty amazing things with them and these birds, they heal pretty quickly, too," Lamb said. "Every year there are birds of prey whether it's an eagle, hawk, owl or anything in between that gets rehabbed and released back into the wild."

Lamb said on Tuesday afternoon the injured bald eagle was taken to a clinic in Cape Giraradeau which is certified and permitted through the U.S. Fish and Wildlife Service to work with these types of birds of prey.

"We have several rehabbers in the state that will take birds of prey and large predatory birds, like eagles," Lamb said. "They have to have special certifications and permits to the U.S. Fish and Wildlife Service. It took a while of phone tag but I finally got a hold of them and they recommended the appropriate animal clinic to take it to and see if the vet can splint the wing."

Lamb said until he could get it to the clinic, he kept the bald eagle in a box because being confined in a dark space keeps them calm.

"It makes them feel safe and secure and keeps their heart rate down so to speak and keeps them from getting agitated," Lamb said. "When I checked on him he was doing just fine, besides the broken wing of course."

Lamb said when he picked up the bird it was very agitated from the eventful morning. He described his best guess as to what may have happened to the majestic animal.

"The original caller who called it in said there was a dead animal in the median," Lamb said. "Bald eagles, as well as any species of eagle, is a scavenger.

"It is kind of a misconception that they are this majestic hunter. While they do hunt, they scavenge more. It was eating some kind of roadkill along the road and often times, if you watch vultures they are real common to do this, when they take off flying they will beat their wings until they get to a certain point, then they catch the wind, they curve real hard or bank real hard. What typically happens is they will start flying along the road way and when they turn they just fly themselves right into traffic."

Lamb said for some reason the bird must have decided it was time to go or take break and a vehicle got him. He said when help arrived, the bald eagle was acting out of instinct to protect itself.

"At that point you have to put yourself in the eagle's position," Lamb said. "Here he is, he is injured, he is laying on the side of the road or wherever and, of course, cars are screaming by.

"That is all pretty exciting for him and then he views us a a predator, even though he is a predator himself. He views us as a threat so he starts getting agitated and wants to defend himself and get away because he doesn't want to be around us. Of course, we are not trying to do anything wrong. We are trying to help him but he doesn't understand that."

Lamb said he recommends anyone who sees an animal, such as a bald eagle, in distress to contact local law enforcement or the Missouri Conservation for assistance.

"They don't necessarily need to stop or try to protect and don't ever put yourself in harm's way. It is always encouraged to give us a call. Sometimes we can save them, other times we can't, but we try to give them every chance and every opportunity we can."

What do we know about the Omicron variant? 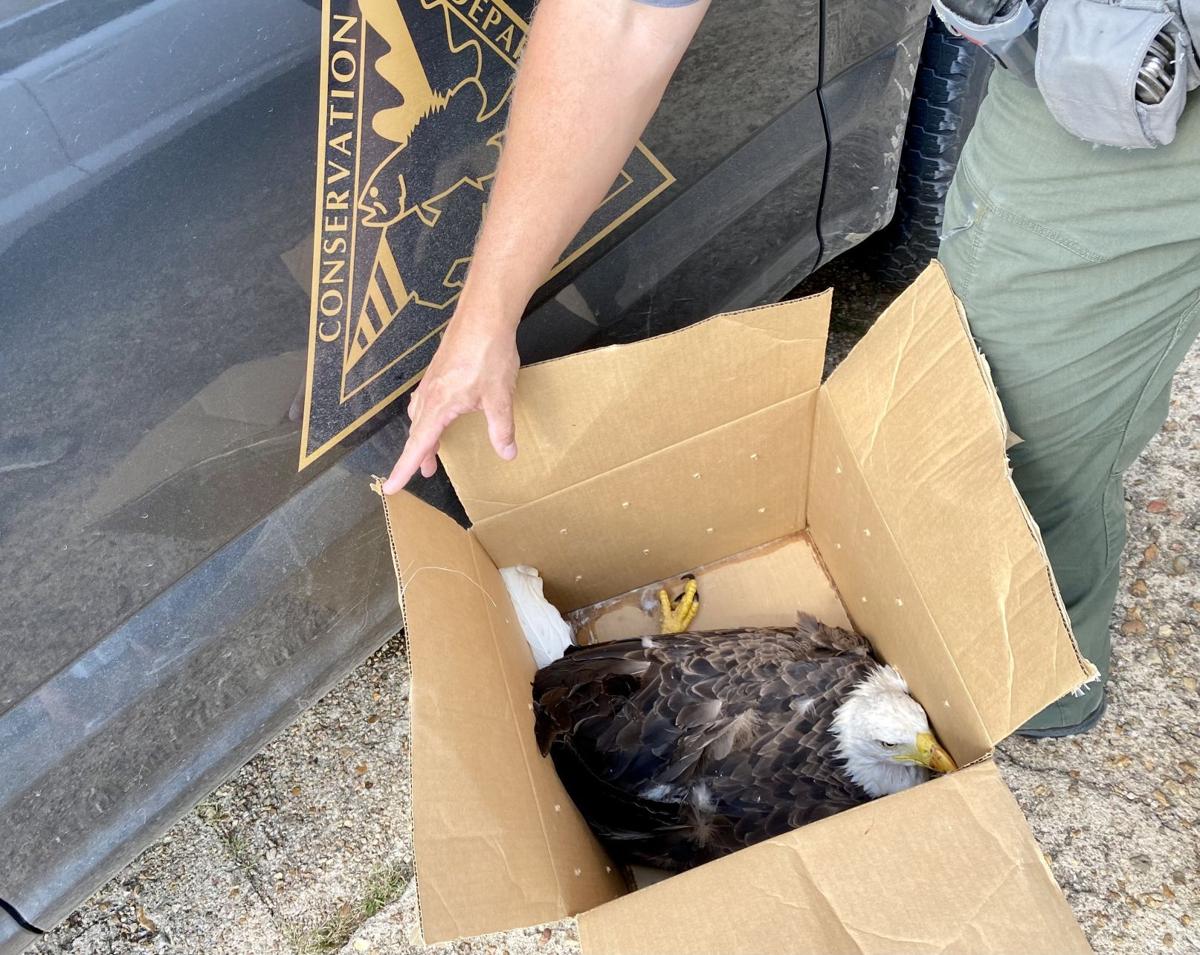 Missouri Conservation Agent Alan Lamb secures a rescued bald eagle for its trip to a veterinarian in Cape Girardeau Tuesday. 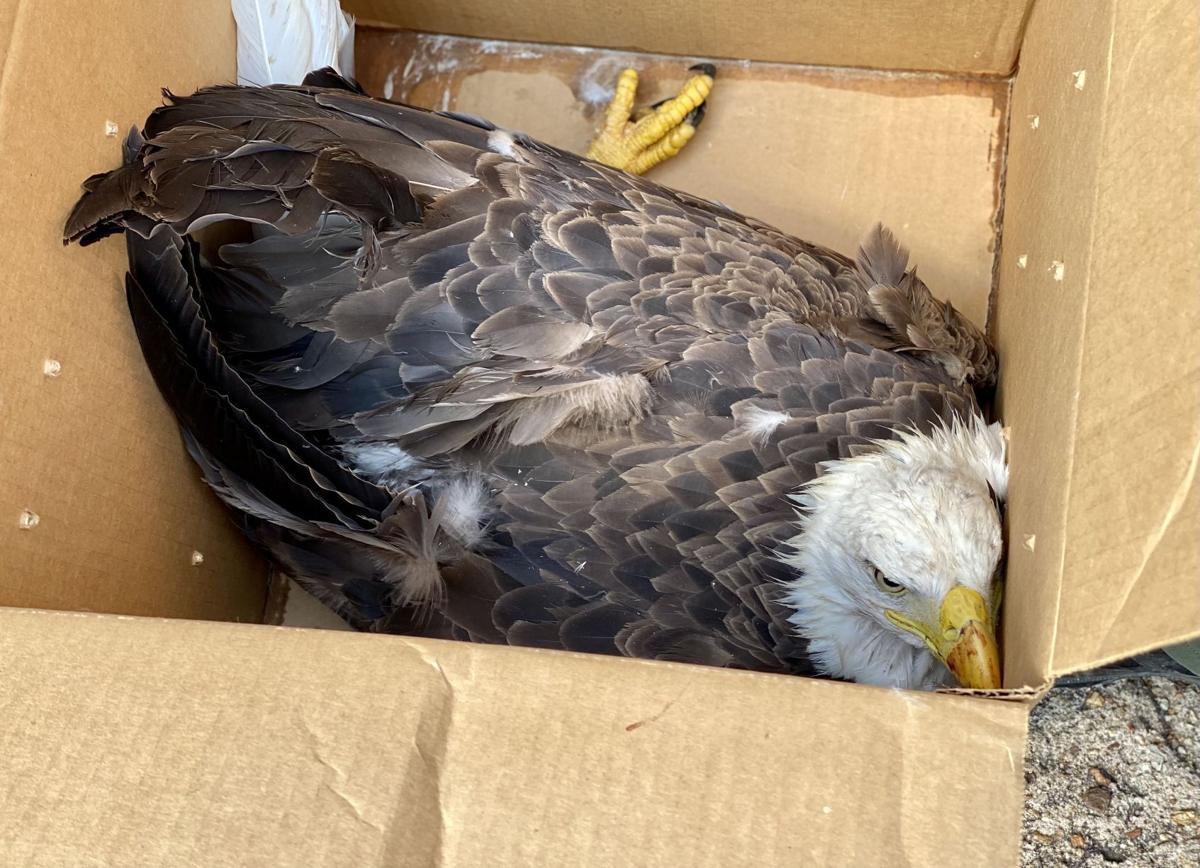 This injured bald eagle was found along US 67 just south of Fredericktown on Tuesday morning. It has a broken wing.