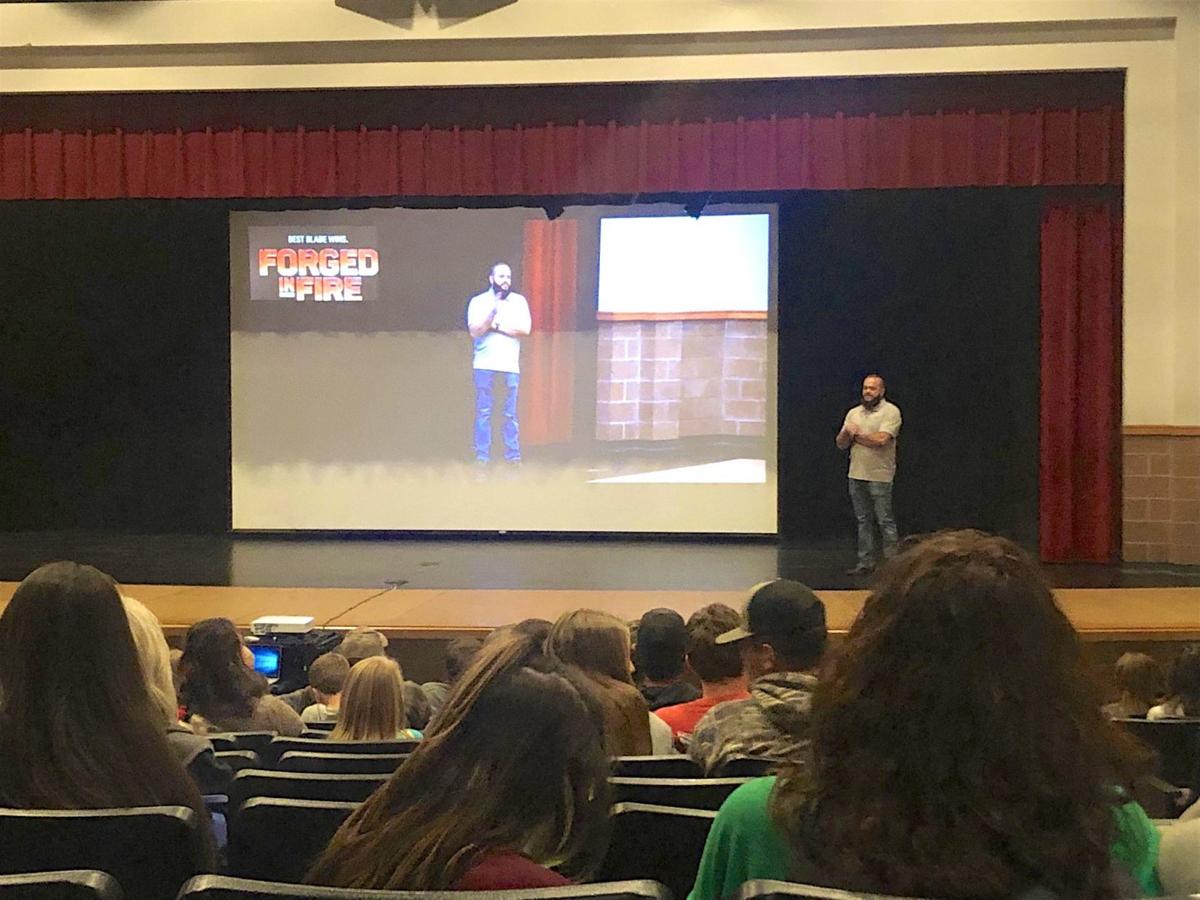 John Wigger stands before a crowd of about 300 people Wednesday night during a commercial break of the History Channel show "Forged in Fire" which is shown on a big screen in the Central High School auditorium. The local school employee and co-owner of Hawthorne Forge won a competition against three other blacksmiths and won $10,000. Wigger had kept his win secret since filming ended in August. 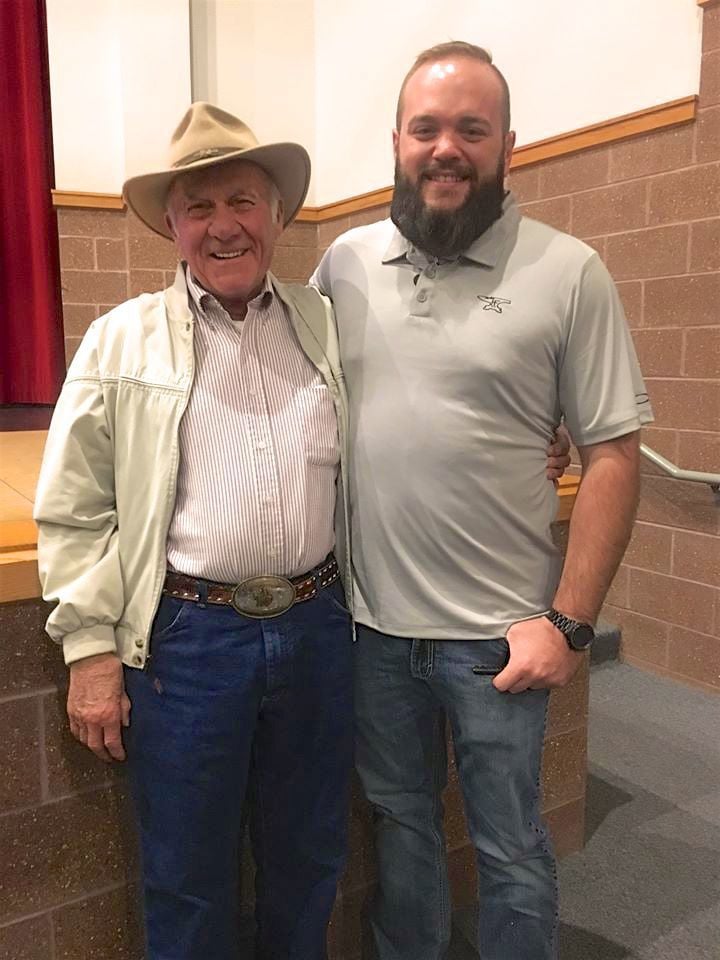 Following the end of the public showing of "Forged in Fire" at Central High School, John Wigger stands proudly with his grandfather, Dale Pinkston.

Well, the secret is out and about 300 people who watched John Wigger win in competition against three other blacksmiths and take home a $10,000 prize Wednesday night on the History Channel show “Forged in Fire” were able to congratulate the North County graduate and Central School District employee themselves.

The group had gathered in the Central High School auditorium to find out if the co-owner of Hawthorne Forge in Desloge would come out on top in the end. The episode, filmed in August, meant that Wigger, 29, had to keep mum about the outcome for several months.

“Me and my wife were the only ones that knew,” he said. “I didn’t tell my parents or nothin’. The hardest part was the slip-ups, like me saying stuff about the $10,000 or in small talk accidentally slipping up. That was the hardest part.

“It wasn’t hard like not telling people — I was fine with that. I actually signed a non-disclosure. If it got out that I had told people about the outcome they could have sued me for a million dollars, so it was pretty easy to not say anything.”

And how does it feel now that he can tell the world that he won?

“I’m relieved and it’s just awesome to see the support that our community has given me,” Wigger said. “My wife, Erica, and I ran by Walmart [Thursday night] just to see all the craziness going on and people I didn’t even know would come up and say, ‘Congratulations! We watched! You did awesome!’ It’s just awesome to see the support of the community for stuff like this.”

Wigger has heard from other people as well since winning the competition.

“Fans of ‘Forged in Fire’ have been messaging me, wanting me to get in certain groups on Facebook now,” he said. “People are also wanting knife orders and stuff, but we actually have our books closed now because we were already busy before this happened. There’s only two of us — me and Joe Nipper. Last month we had like 20 knifes that we’re supposed to finish before Christmas.

“That’s a lot for us because it will take us a week to make one knife. We work on them in the evenings and the weekends. It’s a long process for us. It takes us a long time and some people don’t understand how long it does take."

Like other reality shows, previous participants can be brought back to take part in future “Forged in Fire” competitions — and Wigger planned ahead for that possibility.

“They’ve brought back fan favorites and I tried to be the biggest personality I could be,” he said. “I’m kind of a crazy person. The Daily Journal actually did a story on me a year or two ago. I actually shaved a Christmas tree into my chest. I won the largest Christmas sweater contest in the world.

"So, they showed that picture at the very beginning of the show and I actually shaved an anvil into my chest for ‘Forged in Fire.’ Hopefully I’ll get called back as a fan favorite just because of how crazy I was and stuff. They’ve done team competitions on the show and I’d like me and my business partner, Joe, to be on there.”

According to Wigger, the Central School District has been “super supportive” of his appearance on the show — which brings the story back to the watch party held in the high school auditorium.

“There was probably close to 300 people at the watch party out of the community, friends and family,” he said. “It was insane. To hear the cheers and stuff … I went up and talked during every commercial and then at the very end the roar sounded like I was at a Cardinals game. It was crazy.”

While Wigger considered his time on the show to be a lot of fun, he sees a spiritual component in the whole experience as well.

“One of the competitors I was up against was a guy named Tim Troyer,” he said. “He’s an entrepreneur that owns three businesses. He didn’t need to win $10,000 from ‘Forged in Fire,’ but he’s a great knife maker. He goes to Uganda three or four times a year and he teaches orphans how to blacksmith. This is the way men there support their families. The unemployment rate in Uganda is like 65 percent.

“He goes there and teaches this craft to provide tools and knives for their community. He built them a whole forge there and brought them tools and everything. It’s insane what this guy has done! He teaches them how to blacksmith and will even buy their knives and then he’ll come back to the states and sell them, so they’ll get a lot more money for the knives and sends the money back to them.

“He told me about it and I was kind of thinking about it that night and I was talking to my wife. I said, ‘You know, I’ve never really gone on a mission trip or anything, but I think I’d love to go to Uganda with Tim.’ She said, ‘You know what? You probably weren’t meant to go on the show to win or anything. You were probably supposed to be there to meet Tim.”

After filming ended for the day — forging in a 106-degree heat index and a record for the show — Wigger pulled Troyer aside in the hotel lobby.

“I said, ‘Tim, I want to talk to you for a second. He said, ‘Yeah, go ahead.’ I said, ‘This might sound kind of crazy, but I want to go on a mission trip with you to Uganda. I’d like to be a part of that.’ Tim started to tear up and said, ‘John, I shouldn’t even be here right now. I have a conflict with one of my businesses that I need to take care of, so I was gonna just call and say I can’t go, but I talked to my wife and prayed about it.’

“He prayed that if he came that he would meet a blacksmith that wanted to go to Uganda with him. I never had talked to him about it or anything! That just came out of the blue. It’s crazy because I was actually supposed to be on a different episode earlier in the year and they ended up bumping me back. Tim was supposed to be on an episode last year and it snowed, so they called it off and he ended up getting put on my episode.”

What resulted by the two ending up on the show at the same time is what Wigger calls a “God thing.”

"If it got out that I had told people about the outcome they could have sued me for a million dollars, so it was pretty easy to not say anything." — John Wigger

Pfizer shot expands to US children as young as 12

A man accused of driving his car under the influence of alcohol caused the wreck that took lives of her son, future daughter-in-law, and the c…

Leadwood has lost another police chief. And three out of four full-time officers.

A Bismarck man was seriously injured on Wednesday morning after attempting to avoid a wrong-way driver on US 67 in St. Francois County, accord…

MSHP assisting in search for teen last seen in Belgrade

A search is underway for a Farmington teen reported missing last week and last seen in Washington County.

The St. Francois County Commission regular meeting was enlivened by a minor disagreement about a vehicle swap Tuesday morning.

A man appeared in Washington County last month where he was sentenced to prison for a sexual crime against a minor.

The Missouri State Highway Patrol responded to a one-vehicle accident with injuries Sunday morning near Farmington.

John Wigger stands before a crowd of about 300 people Wednesday night during a commercial break of the History Channel show "Forged in Fire" which is shown on a big screen in the Central High School auditorium. The local school employee and co-owner of Hawthorne Forge won a competition against three other blacksmiths and won $10,000. Wigger had kept his win secret since filming ended in August.

Following the end of the public showing of "Forged in Fire" at Central High School, John Wigger stands proudly with his grandfather, Dale Pinkston.