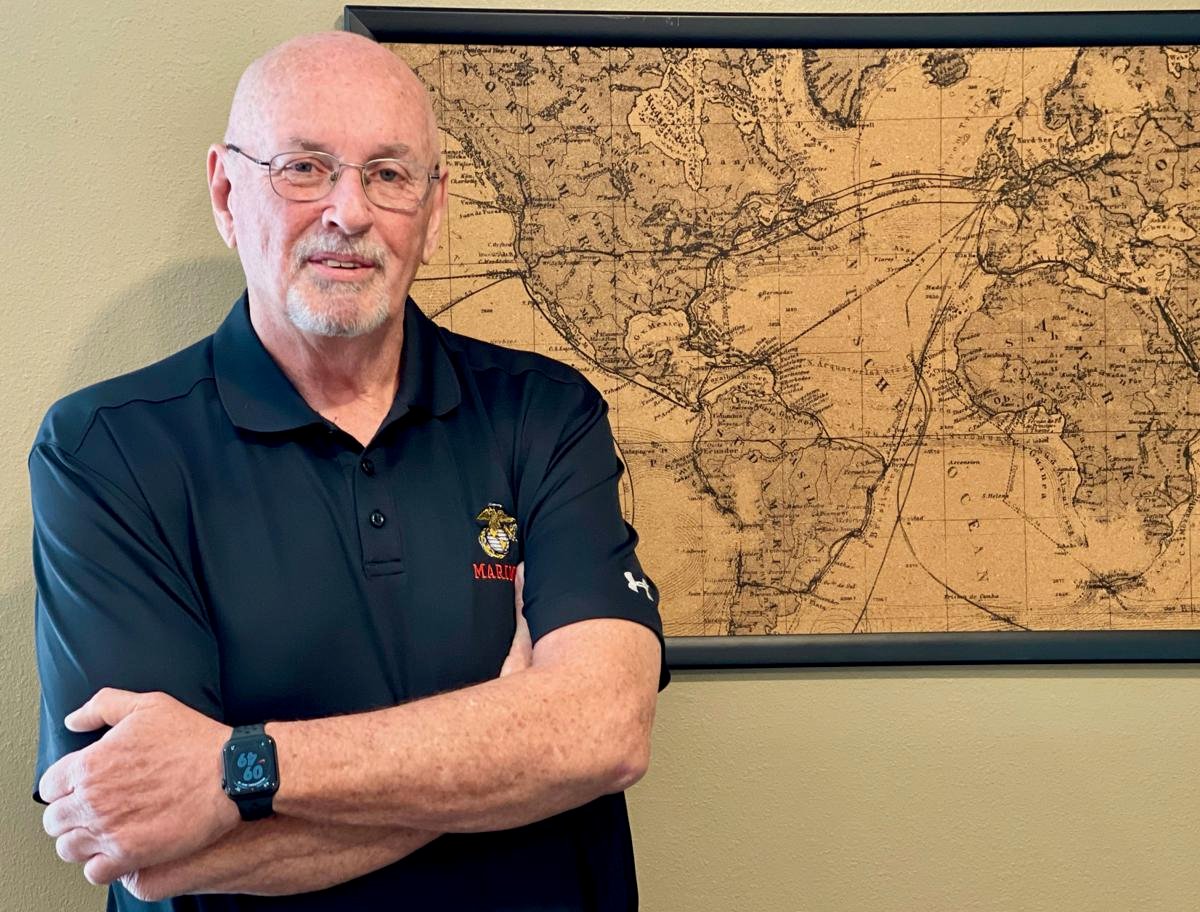 Retired associate circuit judge Randall Head credits the Marine Corps for giving him the direction and discipline needed to have a happy and successful life. While he has many wonderful memories of his time in the service, Head said he still deals with physical ailments caused by his exposure to Agent Orange while in Vietnam. 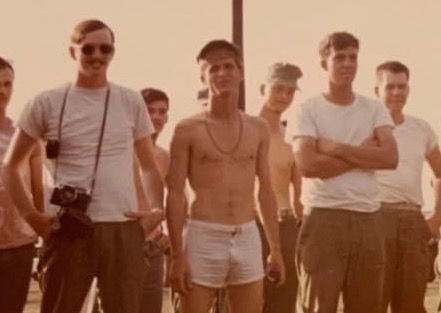 Randall Head is pictured on the far left wearing a T-shirt with a camera hanging around his neck. It was taken in the Philippines during Jungle Environment Survival Training he and his fellow Marines took part in prior to boarding the ship for Vietnam. 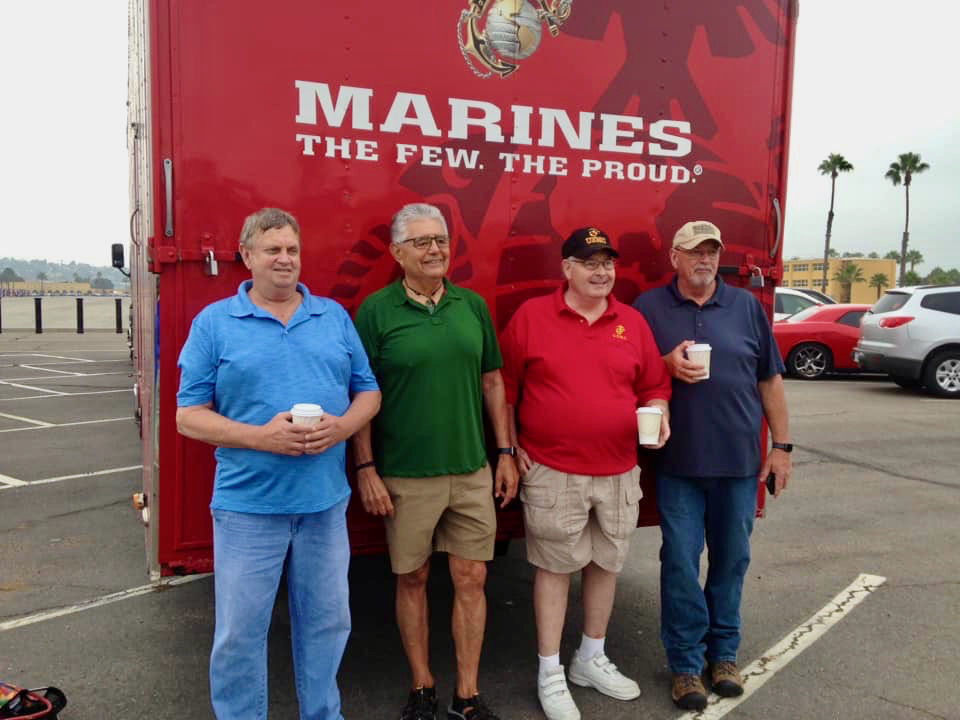 Retired Marine Randall Head, far right, is pictured at a 50-year boot camp reunion of Platoon 1187 held in 2019. The men were invited to the Marine Corps Recruit Training Depot in San Diego where they were guests at a boot camp graduation ceremony. Pictured second from the left is Rico Gil, one of Head's drill instructors. Although the young Marine was "scared to death of him" all those years ago, Head said he and Gil are now "firm friends."

Randall Head is well known in the community for practicing law, his time spent as Iron County prosecutor, and finally the 14 years he spent on the bench as associate circuit judge for Iron County in the 42nd Judicial Circuit.

What many people don't know about the gregarious 69-year-old, called Randy by his friends, is that he's a proud retired Marine who spent nearly two years on active duty in the West Pacific during the Vietnam War.

His is a story of a young man with no direction in life whose destiny was changed forever by the time he spent in the Marine Corps.

"I graduated from Lutheran High School North at 17 and was kind of aimless, so I went to college and took a couple of classes," he said. "Both of my brothers were in the service. Vietnam was going on and I wanted to join the Marine Corps. This was before the lottery."

Head wasn’t especially impressed with college, so he joined the Marine Corps for a two-year enlistment in early 1969 at the age of 17. He was put on a plane in St. Louis and completed basic training in San Diego, California.

I was a ‘Hollywood Marine,'" he said, grinning from ear-to-ear. "That’s what the people who go to Paris Island call us. After basic training I went to infantry training regiment at Camp Pendleton. At that time, Vietnam was still in full swing. Then, for about a month I went to Camp Lejeune in North Carolina for my Military Occupational Specialty (MOS) training."

After completing MOS, Head was put on a plane and shipped out to the West Pacific.

"They pulled three people off of the plane in Okinawa, and I was one of them," he said. "I was stationed in Okinawa as a member of Platoon 1187. My primary base at Camp Hansen. From there I went on what the Marine Corps calls ‘floats.’ I guess you’d call them a deployment now. I went on floats to Japan, Hong Kong, Philippines and Vietnam."

Head considers himself blessed that he never had to experience armed conflict while in the Marines.

"At that time I was 18," he said. "I did everything I could to get to Vietnam and I guess God looks out for fools and young children — and I was a little bit of both at the time. The closest I got was on the U.S.S. Alamo on a task force that was supporting Marines who were withdrawing at that time from Da Nang, what they now call a quick reaction force."

While Head didn’t participate in any battles while serving in the Marines, that doesn’t mean he wasn’t kept busy.

"I did lots of things," he said. "I did supply administration. I did some shore patrol work. I did some driving. That’s primarily what I did.

"I got some special assignments, like what was called back then typhoon watch where we would go in and secure office buildings at night when the typhoons were coming in because everyone was confined to barracks. They needed people in the buildings in the event windows were blown out, doors blew in, troops blew off. I always volunteered for that. I loved that duty because I was alone most of the time."

When asked what country had made the most impact on him while on active duty, Head said, “I’d never seen anything like Hong Kong at the time. I stayed in Kowloon and got out to Hong Kong proper. It was like a James Bond movie or something. I guess the best time that I had in dealing with the locals was either in the Philippines or in Japan."

And what were his thoughts about Vietnam?

"Most of my time in Vietnam was spent on ship," he said. "The lasting impression I have of Vietnam is that I was exposed to Agent Orange and still live with that to this day. Vietnam itself was a country torn, but in my opinion, it wasn’t that much different than the Philippines. There was a lot of strife in the Philippines at the time. You could have picked me up in one and put me in the other and I wouldn’t have known the difference which one I was in."

Head spent 20 months and one day in the Marine Corps. Upon returning home, the reception he received was not a positive one.

“I didn’t recognize Los Angeles, which is where we flew into when we got back," he said. "They told us before we went home to change into civilian clothes.

"I had nothing but bad experiences. There were not the welcoming parades. There was no welcome home or ‘thanks for a job well done.’ It was something to be hidden and it remained that way for years and years. When I went to college at SEMO, even though I was a member of a veterans organization — they called it a fraternity at Cape Girardeau — it was just us. It wasn’t like frat parties and having people in. It was us sitting around telling stories, relating to each other. It wasn’t something to be proud of, unfortunately, for this country."

Head saw an immediate change in the country’s treatment of military veterans after the first Iraqi war.

Once he returned home, Head was motivated to move forward with his life.

"I went to law school and practiced in St. Louis for a year," he said. "I did not like that. My dad was active with Farm Bureau in Iron County and John Cayfield offered me use of an office there for weekends — like a Saturday morning practice. They didn’t charge me anything. I was there a month and I had so much business that I came down full-time. In St. Louis, I was a little bitty fish in a great big pond."

Head credits his time in the Marines for any successes he's experienced in his life.

"There’s no question in my mind that I wouldn’t be close to being the man I am today without the Marine Corps," he said. "I barely got out of high school — and it wasn’t because I was stupid. It was because I was bored and I didn’t have direction and I didn’t have discipline. The Marine Corps gave me both direction and discipline. It taught me that there is nothing that I cannot finish and that when you start something, you have to finish it.

"I learned in that eight weeks that I could do anything. Yeah, I can take anything for probably any amount of time if I know that there’s a finish line. I’ve said it a thousand times since I graduated boot camp — if I can get through boot camp, I can do this. And it’s absolutely true. It was the best thing to happen to me. Every military guy says ‘I wouldn’t do it again for anything, but I wouldn’t trade the memories for a million dollars.' That’s absolutely true."

An unexpected joy Head has experienced in recent years is the rekindled friendships he's made with his fellow Marines — and a newfound relationship he's developed with a person who scared him to death all those years ago.

"One of the blessings of my life is there were about eight or nine of us who still keep in touch 50-some-odd-years later," he said. "Several years ago we reached out to our drill instructors (DI) and we’ve done two or three reunions with two of our drill instructors that have become some of our very best friends. Went back to San Diego for a 50-year reunion and got to sit in on a graduation where we were actually guests of honor. I was sitting there with my DI watching these recruits graduate. It was just surreal. My drill instructor, who terrified me when I was 17, is one of my very best friends now."

Head retired as associate circuit judge in October 2019 for no other reason than he felt the time was right.

"I retired just because I wanted to do something a little different," he said. "I practice law with Joe Goff in Farmington. I’m called ‘of counsel’ and Joe and I consult on certain cases. He has his practice and I have mine. We have certain cases that we do together — mostly personal injury cases.

"I do mediation with a very terrific company in St. Louis, United States Arbitration and Mediation. That’s about all I do. Oh, and my wife Paula and I spend our free time in Colorado when we can."

Retired associate circuit judge Randall Head credits the Marine Corps for giving him the direction and discipline needed to have a happy and successful life. While he has many wonderful memories of his time in the service, Head said he still deals with physical ailments caused by his exposure to Agent Orange while in Vietnam.

Randall Head is pictured on the far left wearing a T-shirt with a camera hanging around his neck. It was taken in the Philippines during Jungle Environment Survival Training he and his fellow Marines took part in prior to boarding the ship for Vietnam.

Retired Marine Randall Head, far right, is pictured at a 50-year boot camp reunion of Platoon 1187 held in 2019. The men were invited to the Marine Corps Recruit Training Depot in San Diego where they were guests at a boot camp graduation ceremony. Pictured second from the left is Rico Gil, one of Head's drill instructors. Although the young Marine was "scared to death of him" all those years ago, Head said he and Gil are now "firm friends."