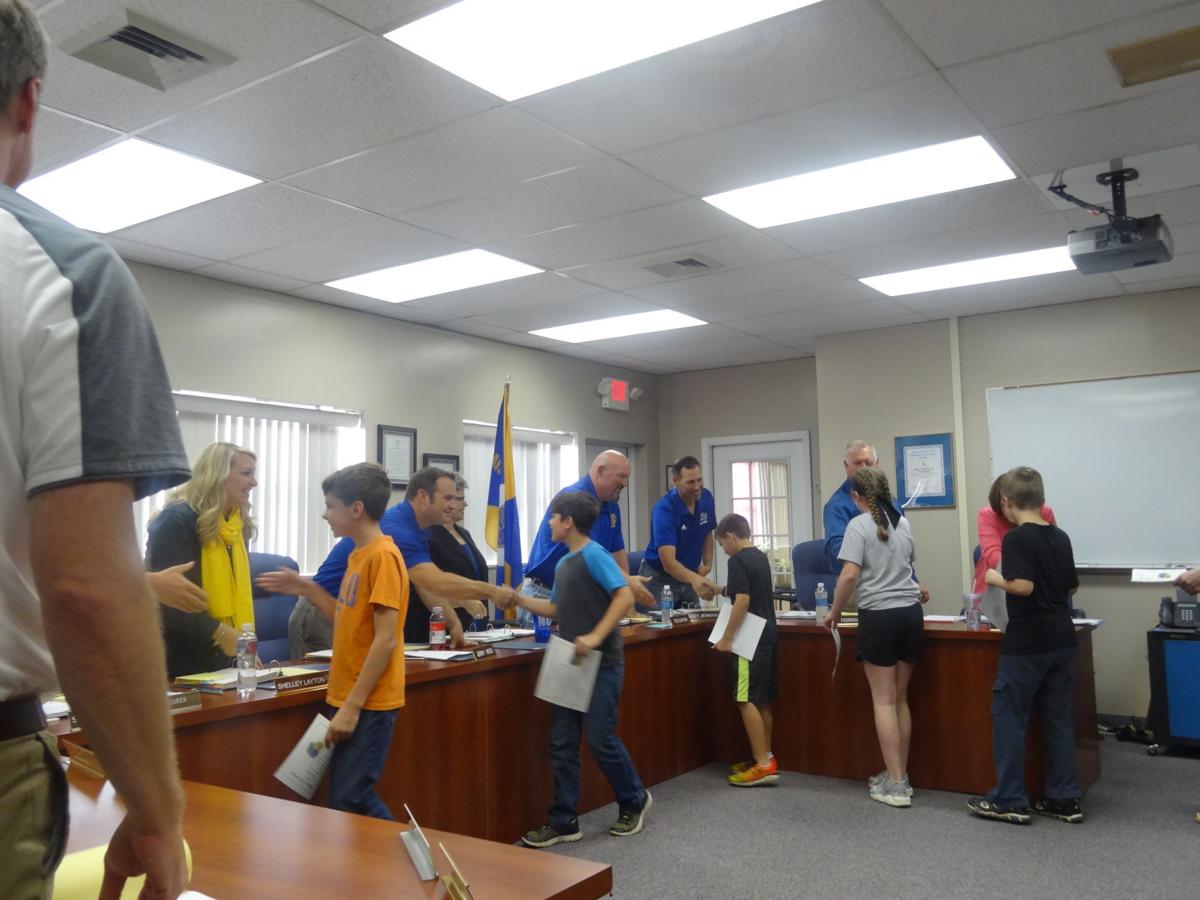 North County Board members shake students' hands after the students were honored for their achievements in the Regional Math Competition. 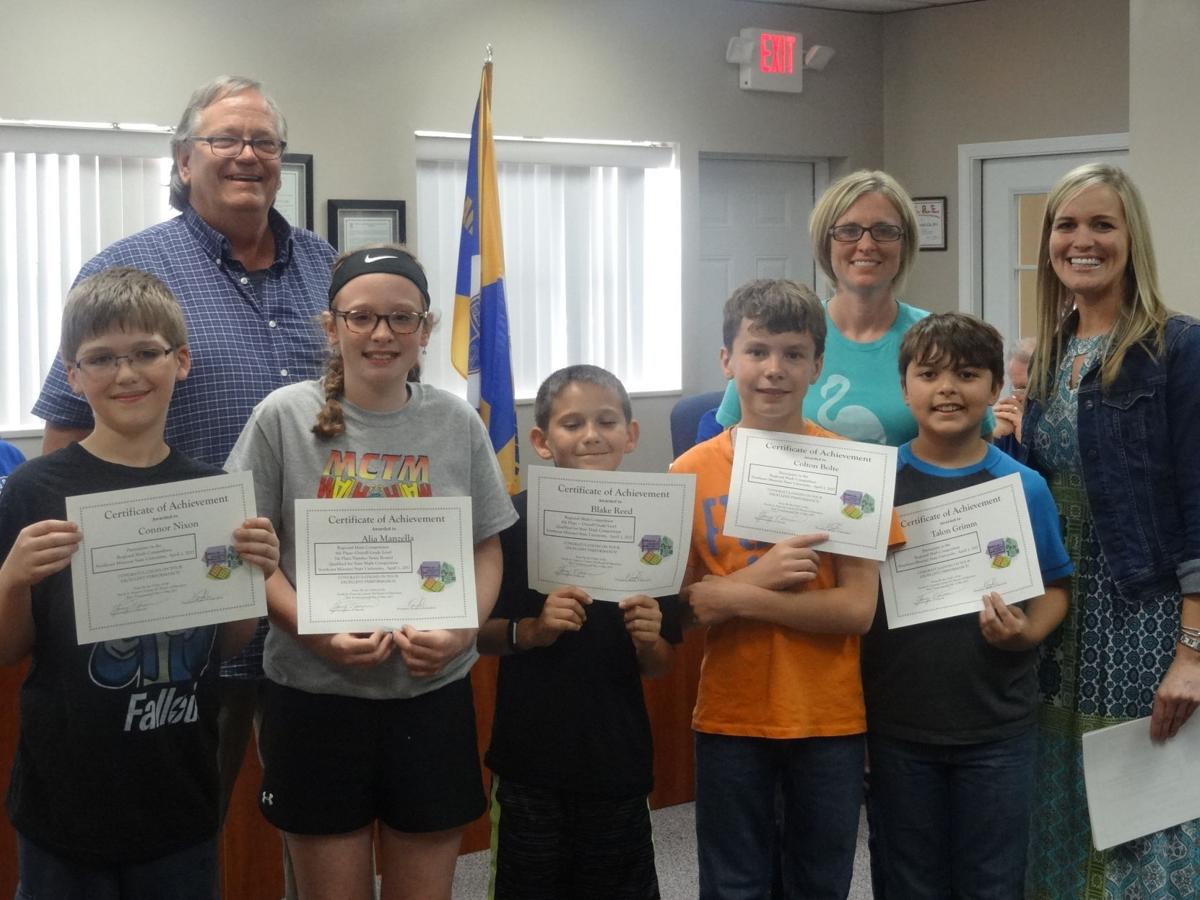 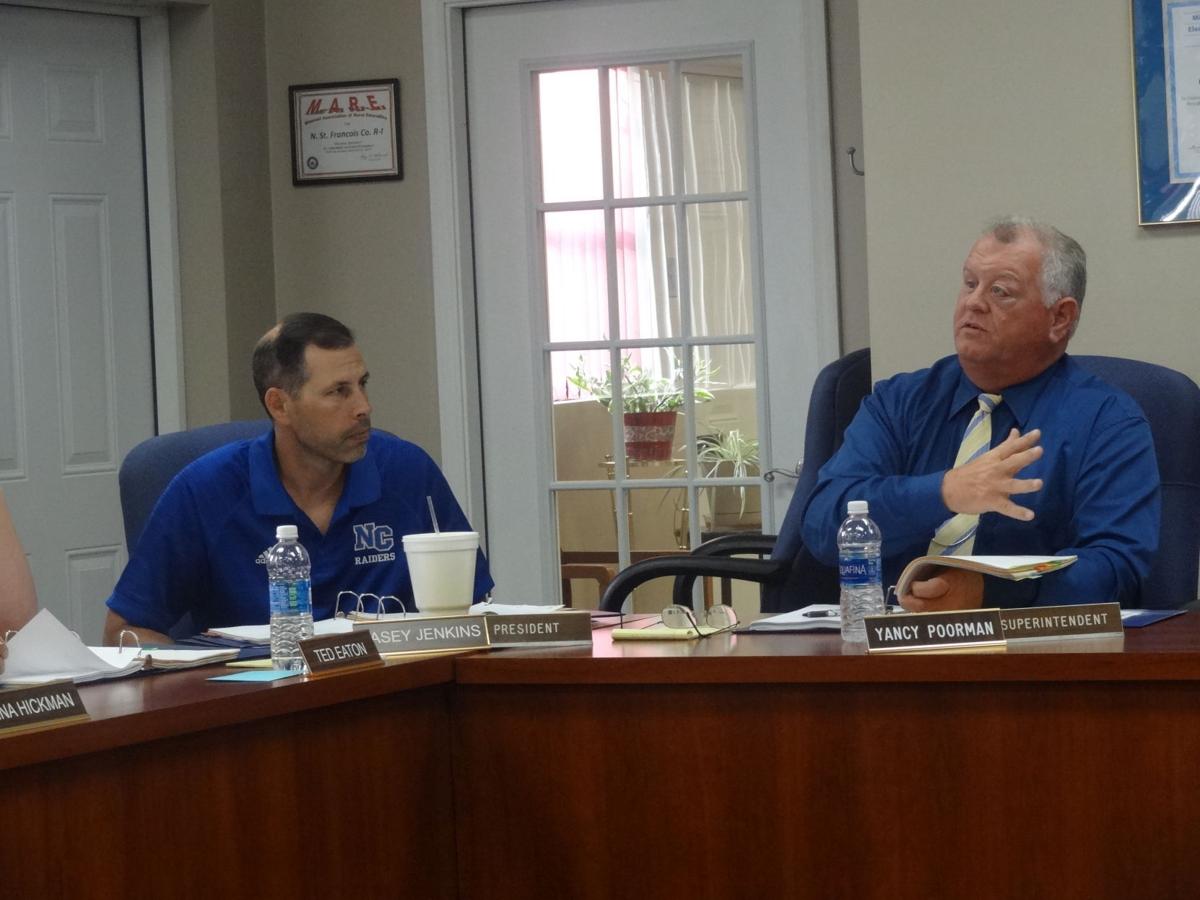 North County Board President Kasey Jenkins looks on as Superintendent Dr. Yancy Poorman, right, discusses several bids during regular session in hopes of getting work moving along now that school is out for the year.

The North County Board of Education awarded several bids Monday night after discussing each of the projects and the bid recommendations.

The board discussed the high school's electrical system (the portion which services exterior lighting and signage), and North County Superintendent Dr. Yancy Poorman said the issue is a lot more than the baseball field lighting.

“It’s baseball fields, tennis courts, concession stand, back road lighting, digital sign and anything we do for digital signing in front of UniTec,” said Poorman. “Most people don’t realize, but every service we have, the attachments come off the football field concession stand.”

Poorman explained the issue all along has been that if they turn the lights on at all the venues at one time it overloads the system. He added they've had some complaints. He said when there has been track meets and baseball going, and somebody shows up to play tennis, it will either shut the concession stand down or it will kick all the lights off.

“So we started locking the tennis courts box so nobody could throw on the lights,” said Poorman. “We also had talk of a better marquee out front, which will be a new service. The lighting on the back road everybody likes and they thought (it) should be increased.”

Poorman said it was determined they needed a new transformer at the corner of the UniTec tract.

The board made a motion and awarded the bid to Total Electric for $48,911 to upgrade the electrical service for the baseball field, tennis courts and driveway lighting.

The next topic was a discussion about replacing the roof on the high school’s 700 wing, which was on the calendar to be done and was built into capital projects. Poorman said it came in well under what he had anticipated. Huffman Roofing was awarded the bid at $63,690.

The board also addressed replacing the outside door sets at the high school and Parkside.

“This will be upgraded new from what we had and what we had is junk,” said Poorman. “These are main exit doors where we have deliveries made, and at the elementary it’s out the back side of the kitchen. It gets used so much and we are going to upgrade it to the steel doors because it’s constantly being used.

"We only received one bid on this because they have to make them fit in the current opening, which means you have to fabricate the door frames,” said Poorman. “It’s not a perfectly standard size and it’s not like wood door frames. You have to build them to fit, mount them and make it fit our door.”

The board awarded the contract to Overhead Door Co. to replace three doors at the high school and Parkside for $14,288.

Another topic of discussion was the stage lighting at the high school. Poorman said they are done spending $600, $700 or $800 every time they have a production, adding that anytime anything goes on with the stage they spend money changing out light bulbs.

“It’s all incandescent lights, the switches aren’t good and we are going to change it all out to LED and be done with it,” said Poorman. “What we have is expensive to constantly replace. Every time we turn them on we have to replace bulbs. In two years we will have saved what we are spending now. It’s eating up maintenance money, too.”

He recommended the Butler Supply’s bid of $19,474 to replace all the stage lighting at the high school.

Dell was also awarded a contract for $182,572.50 for 550 Chromebooks to be divided between the incoming seventh graders and tenth graders in the fall.

“It was Katie (Bockman) who did this and we did well,” said Poorman. “The Chromebook market has grown so much that they had to get realistic with these things.”

Associate Superintendent Bockman said they are doing a rotation between the middle school and the high school.

Bockman said they hope to be on the three-year rotation.

Also during the meeting the board awarded a contract for $22,729 to Sheet Metal Systems for soffit installation at the middle school.

A Farmington woman was moderately injured in an accident on Hildebrecht Road on Wednesday night in St. Francois County, according to a Missour…

North County Board members shake students' hands after the students were honored for their achievements in the Regional Math Competition.

North County Board President Kasey Jenkins looks on as Superintendent Dr. Yancy Poorman, right, discusses several bids during regular session in hopes of getting work moving along now that school is out for the year.