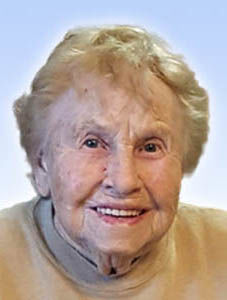 DOE RUN – Elsie Marie Hurst of Doe Run passed away May 18, 2019, at her residence at the age of 93. She was born January 15, 1926, in Delassus, Missouri, to the late Charles and Elsie (Lovvorn) Howell. In addition to her parents, she was preceded in death by her husband, Herman Hurst, her siblings, Charles (the late Ellen) Howell Jr., Carl (the late LaNelle) Howell, Dorothy (the late Earl) Hurst, Edith (the late John) Hendrix, Sarah (the late Charles) Reever, and Ruby Howell, son-in-law, Robert Greene, and a brother-in-law, Ray Wilfong.

Elsie attended Flat River Assembly of God Church. Some of her favorite pastimes were camping, traveling, bird watching and she was an avid St. Louis Cardinals baseball fan. Elsie loved her grandchildren and enjoyed attending their school events throughout the years. She will be fondly remembered and dearly missed by all who knew and loved her.

Friends may call on Wednesday, May 22, 2019, from 5 till 8 p.m. at Cozean Memorial Chapel. Visitation will resume on Thursday at 7 a.m. until time of service at 1 p.m. in the Cozean chapel. Interment to follow at Pendleton Cemetery in Doe Run. Memorials, if desired, may be made to St. Jude Children's Hospital, 501 St. Jude Place, Memphis, TN 38105. View the online obituary and share your condolences at cozeanfuneralhome.com.