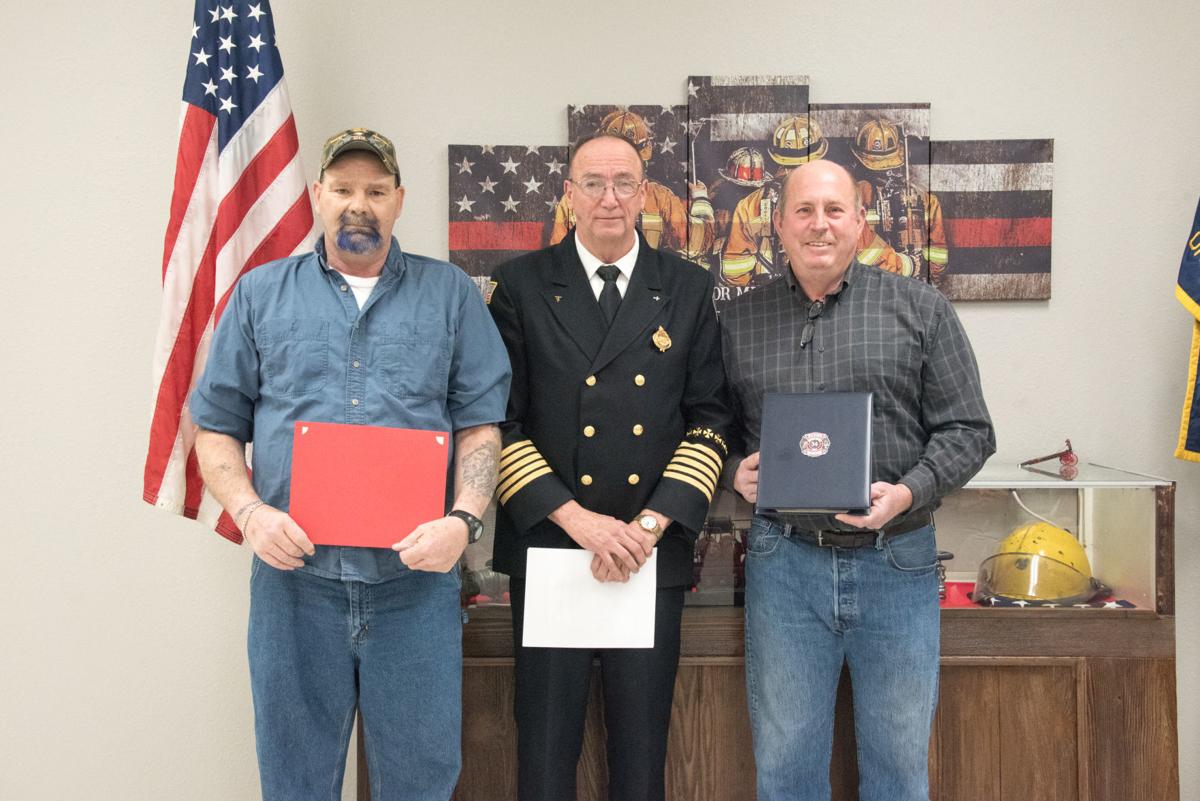 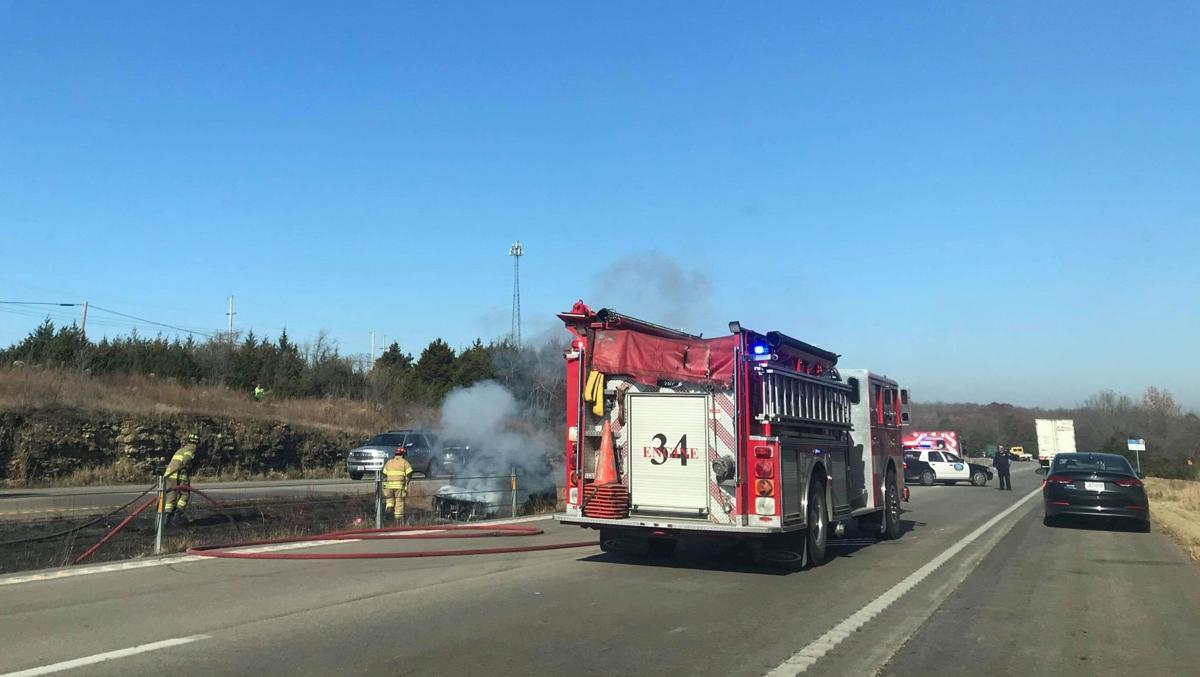 Steven Messer's vehicle caught fire on Nov. 15 after it crashed into the median cables. He passed out at the wheel when his blood sugar bottomed out after dialysis. 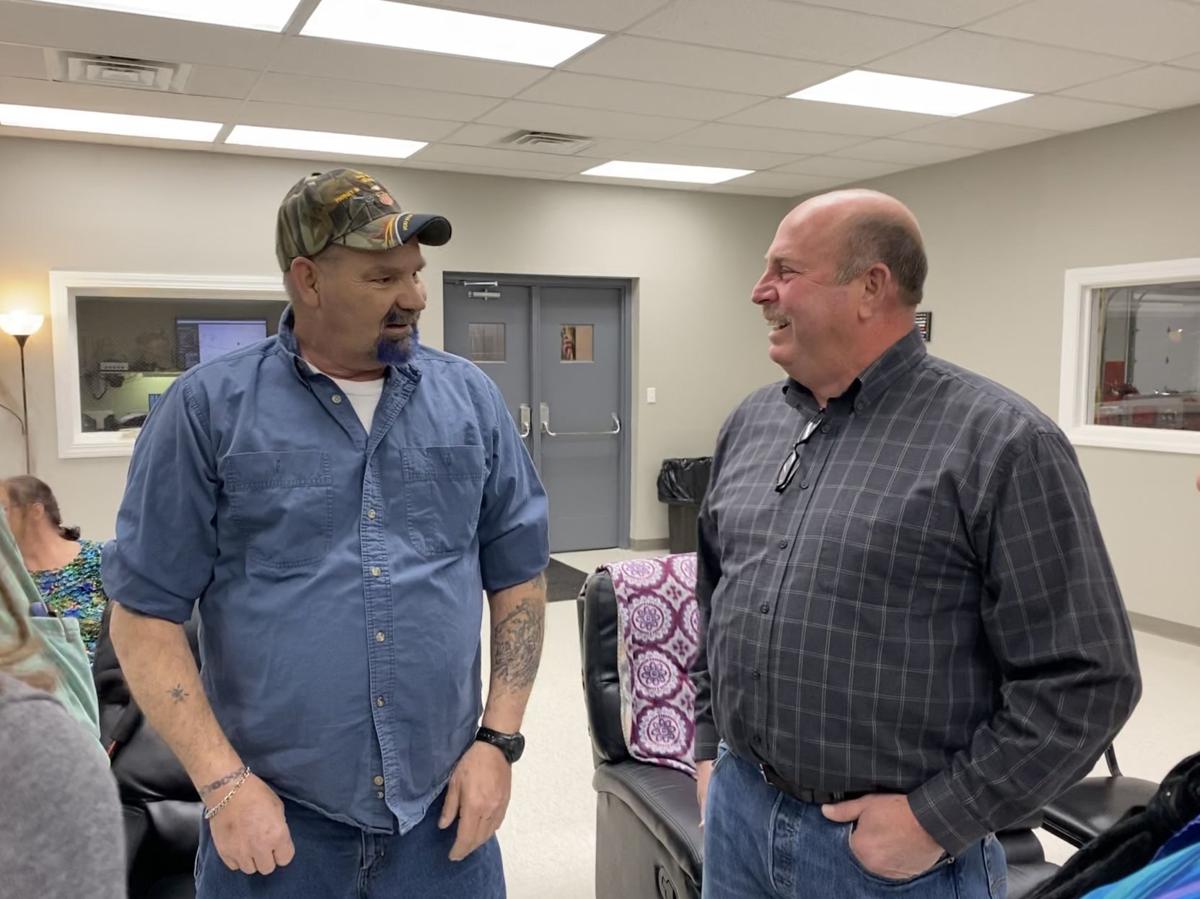 Steven Messer (left) and Dwayne Warncke come together Jan. 12 to meet for the first time since the accident on Nov. 15. 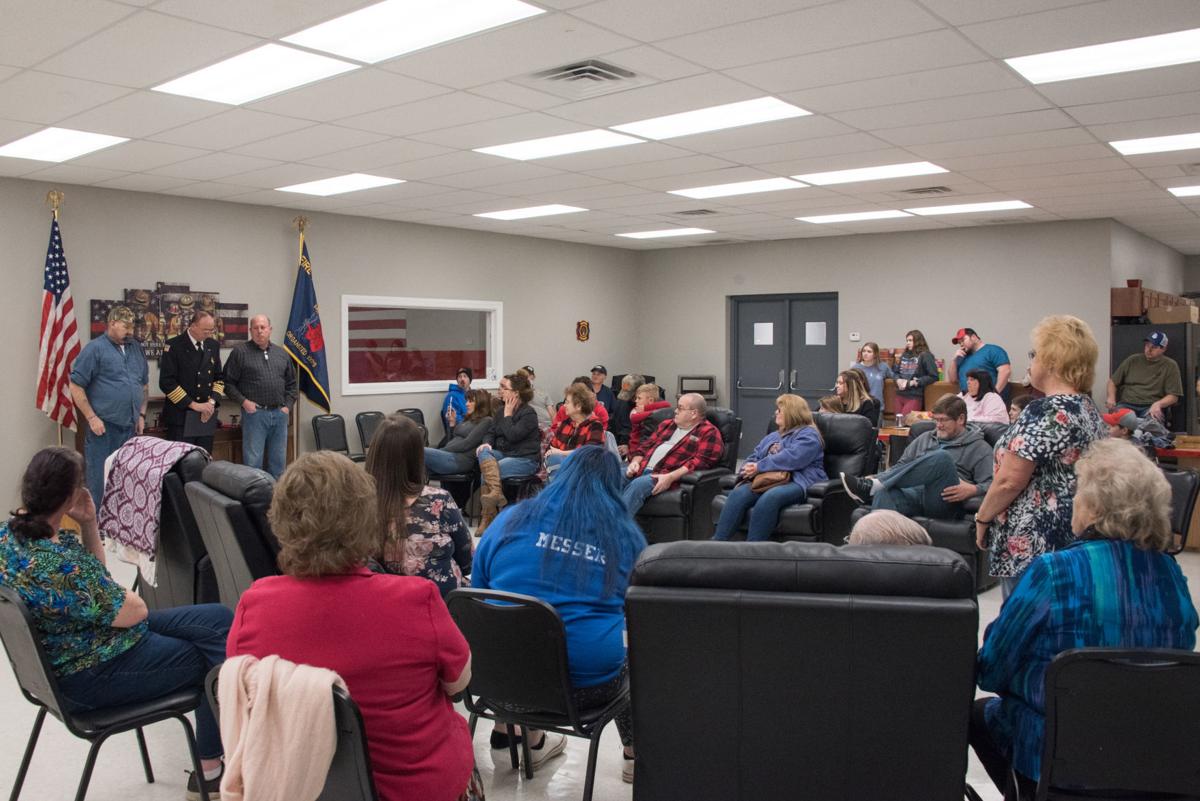 The room is full of people from both the Warncke and Messer families. 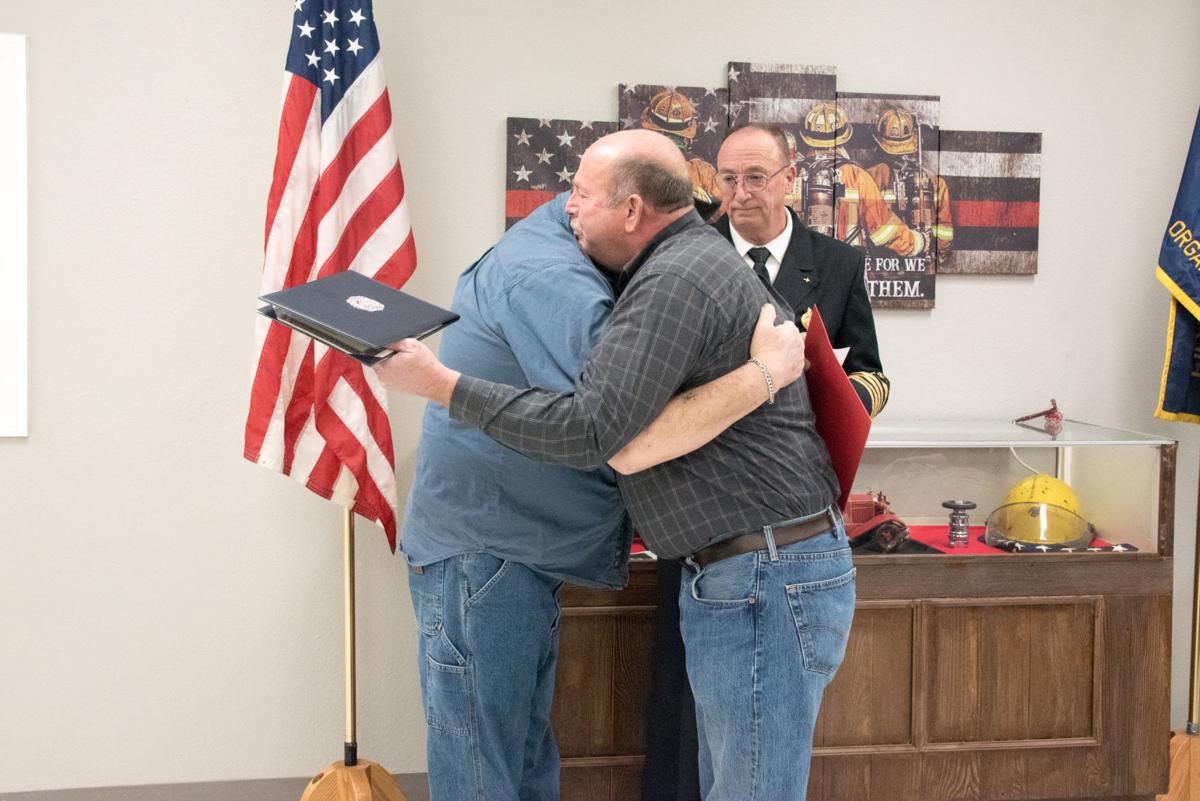 Steven Messer (left) and Dwayne Warncke embrace after telling the story of the accident that brought their lives together. 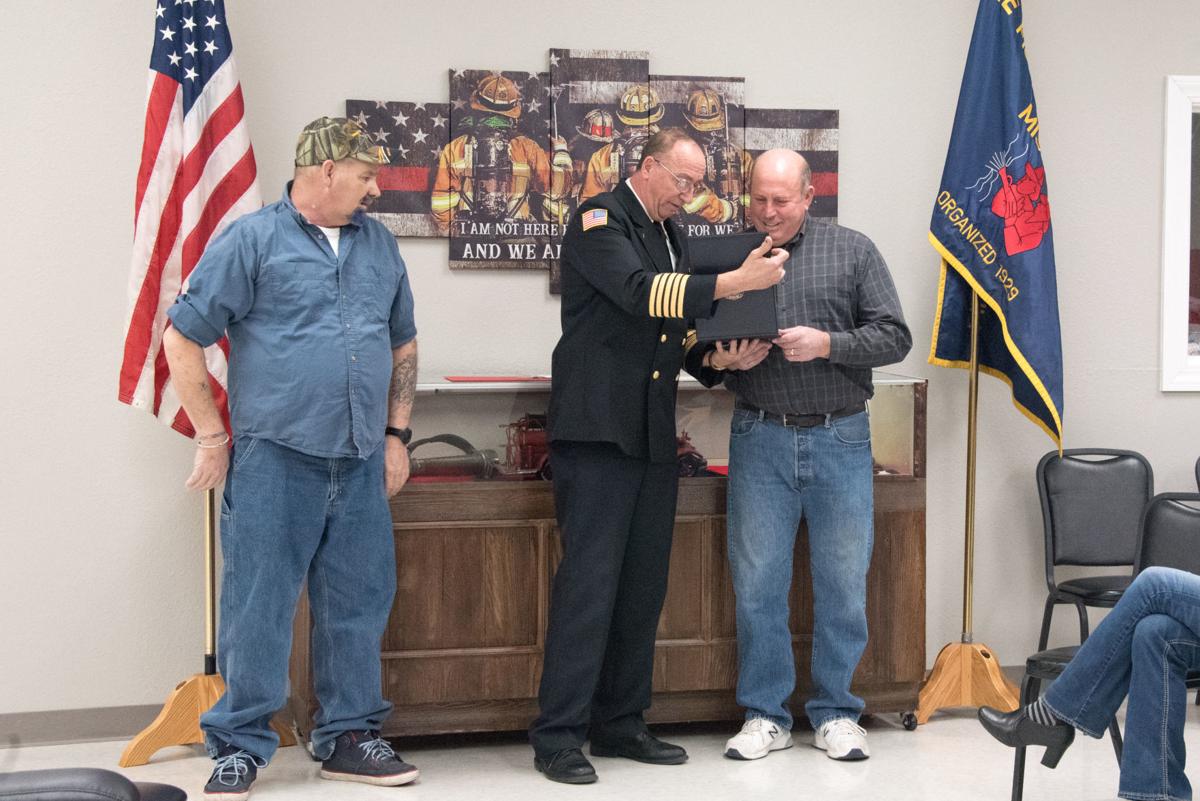 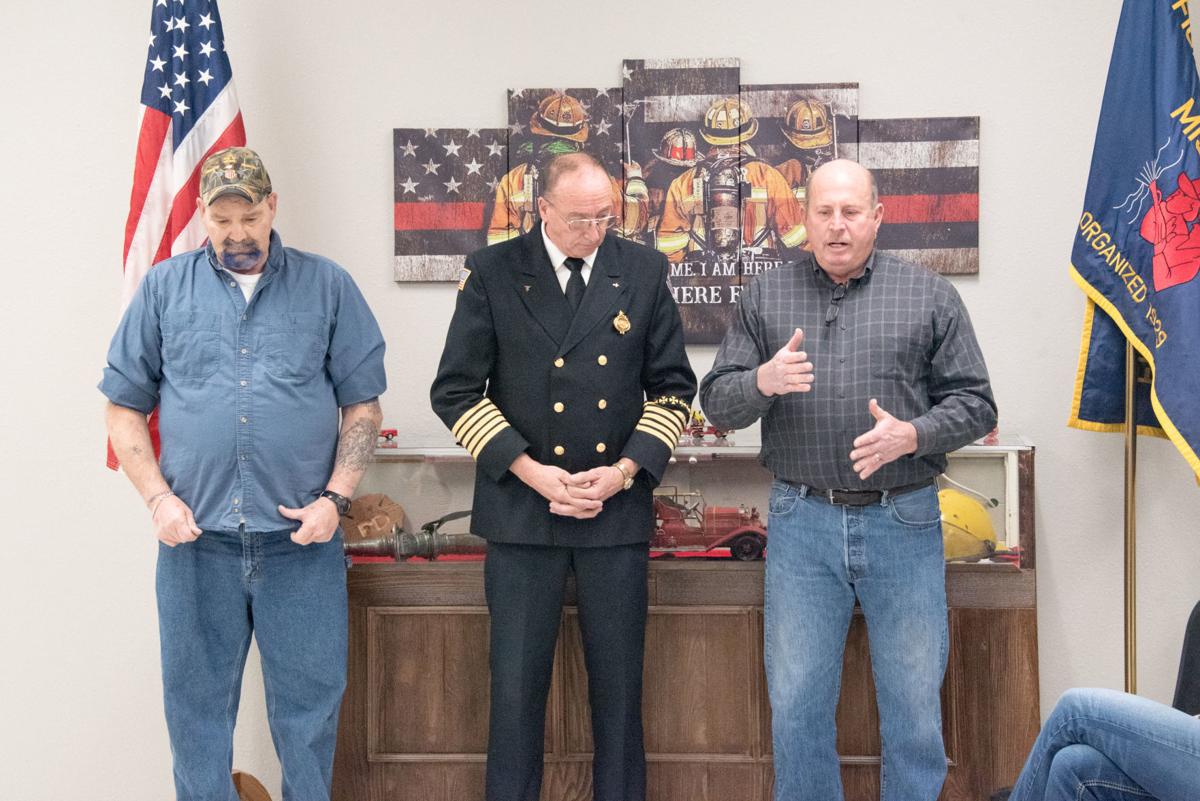 Dwayne Warncke (right) retells his story of what happened when he saw Steven Messer's (left) vehicle on the side of the road on Nov. 15.

Dwayne Warncke and Steven Messer did not know each other when they woke up the morning of Nov. 15, but within hours both of their lives would be linked forever.

A near fatal car accident left Messer in need of a helping hand and lucky for him Warncke stopped to help. On Jan. 12 the two finally met again and were able to bring their two families together in a moment of appreciation and celebration as Big River/Bonne Terre Fire Department presented Warncke with a Life Saving Award.

Messer, who is in stage five kidney failure, was driving home on U.S. 67 Nov. 15, after having his dialysis treatment that morning.

"I left the dialysis clinic and went to White Castle and got me something to eat," Messer said. "I wasn't feeling anything and I've had low blood sugar before. You start sweating and feeling bad, I didn't feel none of that."

"I was just driving down the road eating my White Castle and just went unconscious," Messer said. "I had my cruise control set on my car, it was driving itself."

Video footage from the scene showed Messer's vehicle running in the median until it finally stopped up against the cable and spun until the vehicle caught on fire.

"Before fire department personnel or EMS arrived, passing motorist, Dwayne Warncke, pulled over and found the vehicle on fire, with the driver of the vehicle unconscious and unresponsive, still sitting in the driver's seat," said Big River Bonne Terre Fire Chief David Pratte.

Warncke said at first he thought the vehicle was just stranded from the bad weather a few days prior but when he saw smoke he knew he had to go back.

"I thought well I better get turned around in case something bad is going to happen," Warncke said. "I jumped out and there was already another person there and a lady and we started trying to get him out."

Pratte said the driver's door was against the cables making it impossible to pull Messer from that side of the vehicle.

"We went to the other side and we thought the gas tank was going to blow because it was on fire pretty bad so I got down there trying to get the fire off the gas tank," Warncke said. "The other two was pulling him out and when they got him out I helped pull him away from it."

Warncke said after they pulled Messer away from the vehicle the tires blew.

"I was just thinking 'thank God for us that we were there,'" Warncke said. "Thank God for him that he made it through it."

Pratte said when his team arrived on scene, just minutes after receiving the call, Messer was already pulled from the vehicle and lying in the grass.

Pratte said thankfully there was not anyone else in the vehicle. He said once he could turn his attention back to the driver he realized it was his former brother-in-law and sat with him in the ambulance for awhile.

Messer was transported by ambulance to a local hospital and was released a few hours later.

"There is no doubt, that without the quick response and bravery of Mr. Warncke, the outcome of the incident would have been tragic," Pratte said. "There was so much went on so fast it's hard to capture it in words. But the picture of what you see is just extraordinary."

Pratte said this gentleman took his time to stop, walk over and help somebody while others were going by with their cameras thinking it was a drug overdose.

"We have so many bad things going out, people hesitate to pull over and help people because of a lot of bad situations," Pratte said. "He stepped forward. He's the hero of the day. There's just not enough that someone could do to say thank you."

As Warncke recalled the day there was not a dry eye in the room. He apologized for getting emotional saying it was a very tense moment and they did not know what was going to happen.

"We didn't know, we just knew what we had to do and thank God it came out and it worked out good," Warncke said. "I would do this, I would do it again if I would ever have to do it."

Warncke said he could not have done it alone and the other two gentleman and the lady that were there risked their lives as well.

Pratte said if those other individuals are identified or if they come forward, the department would honor them as well. He said it takes a lot of team work to have outcomes like this.

"At the fire department we see this a lot and we see families destroyed by death," Pratte said. "This man (Warncke) was part of saving a life and part of that family and I think we should honor him for doing his duty, pulling over and putting his life on the line."

In light of the growing number of confirmed COVID-19 cases reported across the nation, including one confirmed case of the coronavirus in St. …

St. Francois County Health Center Director Amber Elliott confirmed Wednesday afternoon that there is a third case of coronavirus in the county.

11:30 a.m. SATURDAY UPDATE: The St. Francois County Health Center is asking anyone who attended a wedding at Heritage Hall in Bonne Terre on M…

Gov. Mike Parson has enabled local school administrators to “make the best decisions for their communities as Missouri continues to combat the…

SFC: No change to 'virus' guidelines; but workers cut to half staff, limiting meetings

The St. Francois County Commission has no plans at present to “tighten” guidelines for county residents and businesses in response to the spre…

Steven Messer's vehicle caught fire on Nov. 15 after it crashed into the median cables. He passed out at the wheel when his blood sugar bottomed out after dialysis.

Steven Messer (left) and Dwayne Warncke come together Jan. 12 to meet for the first time since the accident on Nov. 15.

The room is full of people from both the Warncke and Messer families.

Steven Messer (left) and Dwayne Warncke embrace after telling the story of the accident that brought their lives together.

Dwayne Warncke (right) retells his story of what happened when he saw Steven Messer's (left) vehicle on the side of the road on Nov. 15.