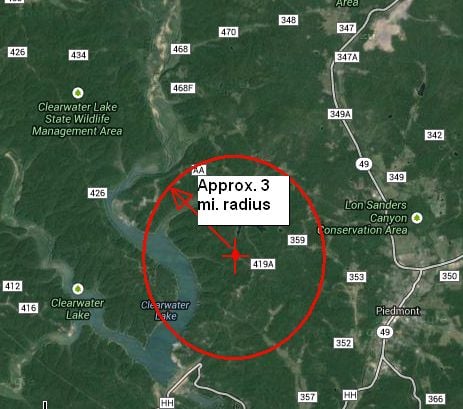 This map shows the approximate location of the home shared by William Talley and Jordy Wagner in the Bluffview area of Clearwater Lake in Reynolds County. The couple’s remains were found by search dogs approximately three miles from their home in the edge of Wayne County at about 2 a.m. 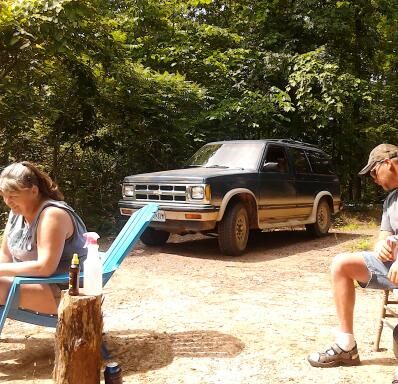 According to sources, remains of the Reynolds County couple who went missing more than two weeks ago were discovered in a wooded area of Wayne County during the early morning hours Thursday. Search dogs from the Farmington Correctional Center located the couple not far from where their vehicle was discovered within a few miles of their Bluffview home on Wednesday.

Wayne County Sheriff Dean Finch reported the bodies of 54-year-old William Talley and 47-year-old Jordy Wagner were found around 2 a.m. Investigators with the Missouri State Highway Patrol and the county coroner were called to the scene to collect evidence and determine the cause of death.

According to Reynolds County Sheriff Tom Volner, "The vehicle was found yesterday on a logging road.  There was no one with the vehicle.  The dogs from the prison were called in and at approximately 2 a.m. this morning the bodies were discovered.  "It appears that they became stuck and tried to walk out before becoming overtaken by the weather. Deputies cleared the scene at 5 a.m.

A relative contacted the sheriff's office on Feb. 4. She became concerned when Wagner did not contact her for several days. Relatives went to the couple's Reynolds County home, not far from the Reynolds/Wayne county line, and found there was no heat and the family pets were there. Ice covered the dog's water bowl.

Witnesses spotted the couple the morning of Feb. 1 cashing a check at Peoples Community Bank in Piedmont, in neighboring Wayne County. The bank is just a few miles from their home on County Road 419A in the Bluffview area of upper Clearwater Lake.

The search for a Reynolds County couple had been focused this week on the Patterson area of Wayne County earlier based on new information obtained by authorities.

Reynolds County Sheriff Tom Volner said deputies discovered the couple planned to visit a location near Patterson on the weekend they went missing. The department could not obtain the exact location or a name, but he said authorities would focus their search efforts on that vicinity.

"We did uncover some information. We passed that along to the Wayne County deputies and the troopers over there and hopefully they can find out who that person is. We had them check all the roads on the way over there and any place where they (the couple) could run off the road," Sheriff Volner said earlier this week.

But then the Chevy Blazer belonging to the couple was found a few miles from their home on Wednesday. The search intensified in that area, resulting in the bodies being located by the search dogs hours later.

An area man has been charged with child molestation in St. Francois County after a child reported alleged sexual acts to a daycare provider la…

Teen run over by car after reported altercation in Columbia Park

An area man was killed in a head-on collision that occurred on Route N in Iron County on Monday.

A coroner's inquest was held on Friday at the Madison County Courthouse, where it took a jury just over two hours of deliberation to find that…

UPDATE Aug. 1: The woman has been found.

A Park Hills man was seriously injured in a motorcycle accident on Wednesday in Washington County, according to a Missouri State Highway Patro…

A motorcyclist was seriously injured in a crash in Bonne Terre Tuesday morning.

David Lee Nelson, 39, of Redmond, Washington has been arrested in Missouri and charged with nine counts of invasion of privacy; two counts of …

In this rural Missouri county, the vaccination rate is low and opposition high

At home, Matty Minson was surrounded by woods on the outskirts of this small town. He loved to hunt and fish. During the week, for about 20 ye…

This map shows the approximate location of the home shared by William Talley and Jordy Wagner in the Bluffview area of Clearwater Lake in Reynolds County. The couple’s remains were found by search dogs approximately three miles from their home in the edge of Wayne County at about 2 a.m.