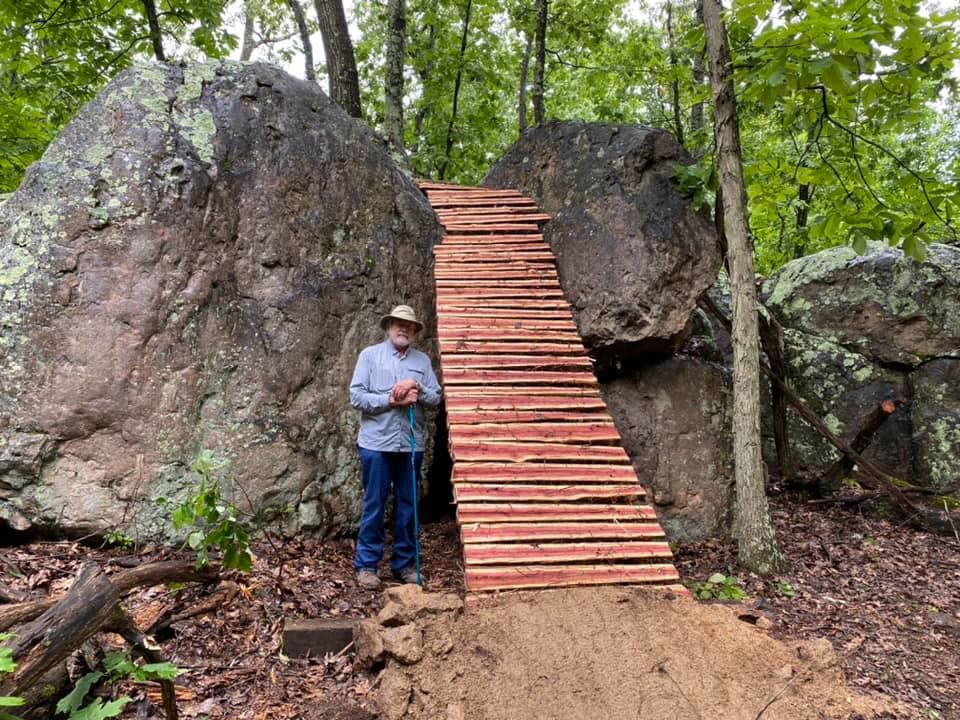 Ironton Mayor Bob Lourwood checks out the progress on the first week of construction on the Shepherd Mountain Bike Park.

The Valley Growth Initiative, a group composed of local business leaders, chamber of commerce members, government officials, residents and members of Gateway Off-Road Cycling, is instrumental in paving the way for the Shepherd Mountain Bike Park.

On May 15, Ironton Mayor Bob Lourwood announced that the Iron County Economic Partnership agreed to fund phase one of the Shepherd Mountain Bike Park.

The city, which owns about 800 acres on the mountain, expects the park to open in the spring of 2021. Construction is set to begin early this month.

According to Chuck Correll, chairman of the Arcadia Valley Tourism Committee and owner of the Fort Davidson Cafe in Pilot Knob, the project began as a conversation between a tourism committee member and a representative from Gateway Off-Road Cyclists, who mentioned that Shepherd Mountain could be a cool mountain biking venue.

The cyclist group from St. Louis came and gave a presentation on the potential.

“We liked what we saw and we could tell from their enthusiasm this was something we needed to look into,” Correll said.

Out of this last year, the Valley Growth Initiative was born, a group composed of local business leaders, chamber of commerce members, government officials, residents and members of Gateway Off-Road Cycling. The group researched, formed a business case, and presented it before the community in Ironton.

“Right now, the biggest enthusiasm about the mountain from the rider community is its elevation, which is 600 feet, which is the highest rideable mountain in the Midwest, according to them,” Correll said. “We take a lot of our guidance from them since they're the experts. Right now those guys have to travel to Bentonville, Arkansas.”

Even the trail builders were excited when they checked the mountain out.

“He was even more excited than they were because of the elevation, because of proximity to St. Louis, and other areas in the Midwest,” Correll explained. “And the fact that the mountain has so many natural features that you typically don't have at most parks.

"A lot of the parks that are built, they have to build in features to make it exciting. Bikers prefer natural features which apparently we have a lot of. So what we're hoping is, according to them, they believe this mountain could become one of the premier mountain biking parks in the Midwest and the entire country.”

The enthusiasm for the project is contagious.

“Everybody is excited about having bike trails on Shepherd Mountain, so that’s what makes it exciting to me,” Lourwood said.

According to the announcement from Lourwood, the city will build a shuttle trail to transport mountain bikers and their bicycles to the peak of Shepherd Mountain. The cyclists will be able to choose from any of the five trails to ride down the mountain. Gateway Off-Road Cyclists will build a climbing trail for cyclists who want to get to the peak without riding in a shuttle.

The city plans to build a pavilion, complete with restrooms, at the base of Shepherd Mountain near the existing hiking trailhead. The shuttle trail and climbing trail will start in this area. All the gravity trails will finish near the pavilion.

Lourwood said the park should be a fun and exciting boost to the region.

“So what we are hoping is that by building these trails, it will be a catalyst for economic development tourism, not only for Arcadia Valley, but in the region,” Lourwood said. “We think that it could reach out to Farmington and Fredericktown and Lesterville and places like that. That we can attract tourists into the area to stay and not just do mountain biking, but to do other things also.”

“It's kind of difficult to project impact,” Correll added. “If what other successful parks are drawing is a good sign, then we're talking about the first five years, we're talking millions of dollars of economic impact to the region.”

The city already has already started planning for additional phases of the bike park, according to Lourwood’s statement, and have started corresponding with event coordinators to hold camps, retreats, and races at the bike park.

Ironton Mayor Bob Lourwood checks out the progress on the first week of construction on the Shepherd Mountain Bike Park.

The Valley Growth Initiative, a group composed of local business leaders, chamber of commerce members, government officials, residents and members of Gateway Off-Road Cycling, is instrumental in paving the way for the Shepherd Mountain Bike Park.