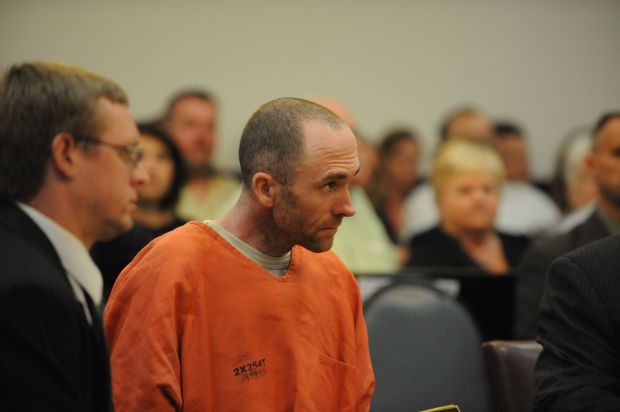 Clay Waller sits down with his attorneys after entering the Cape Girardeau County Courthouse Thursday afternoon. Seated behind him are family members of Jacque Rawson Waller.

Visit www.dailyjournalonline for additional photos and video footage from inside the courtroom. 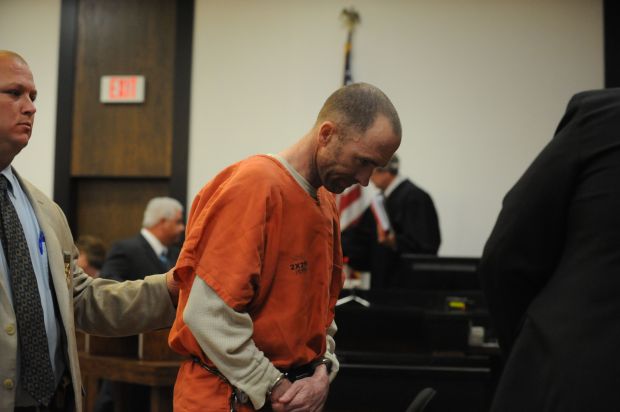 Cape Girardeau County law enforcement officers escort Clay Waller out of the courtroom after he enters a plea of guilty to second-degree murder. 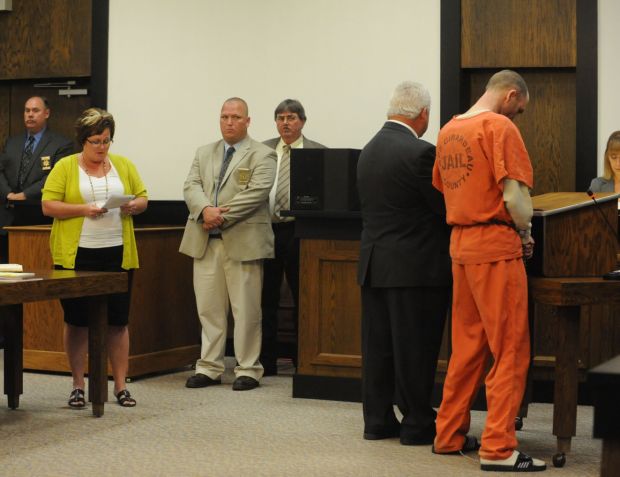 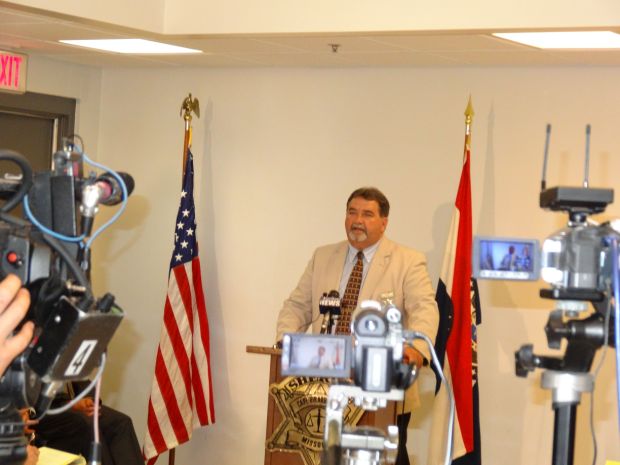 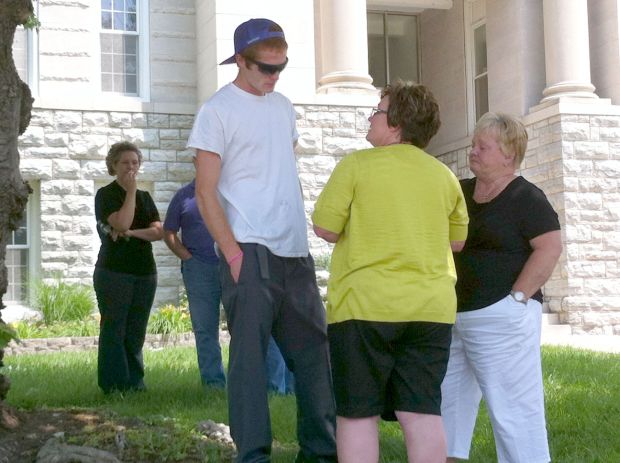 CAPE GIRARDEAU, Mo. — Some questions about Jacque Rawson Waller’s death were answered but some questions remain.

During a 25-minute plea hearing in the Cape Girardeau County Courthouse, James “Clay” Waller, 42, of Jackson, pleaded guilty to second-degree murder. He held his head down most of the hearing, showing no emotion.

Following the plea agreement, Circuit Court Judge Benjamin Lewis sentenced Waller to 20 years in prison, crediting him for the year he has served awaiting trial and running the sentence concurrent to the federal sentence he is serving for threatening Jacque’s sister.

The judge told Waller that is not what he deserves but it will have to do. Waller will have to serve at least 85 percent of his sentence before being considered for parole.

Waller told the judge he and Jacque got into an argument and he lost his temper — while his admission to digging a six-foot hole near Devil’s Island in the Mississippi River the day before tells a different story.

Waller admitted he caused her death by striking her about her face and head with his fists and then pressing his forearm to her neck to suffocate or choke her. He indicated that he killed her in his home.

Assistant Prosecuting Attorney Angel Woodruff explained how they came to the plea agreement of second-degree murder and a 20-year-sentence.

The conditions of the plea agreement were that he tell investigators where to find the body; that investigators find the body and that he tell police how he killed her. The information Waller gave them led them to discovering her body in a place that searchers had been to. Investigators believe it was the depth of the grave and the acidic sand that kept them and dogs from finding her.

Woodruff added that she could not control or bind the state of Illinois or the federal government from seeking their own charges. No one would comment on what those charges would be.

During the plea hearing, Jacque Rawson Waller's sister, Cheryl Brenneke, gave the victims impact statement for the family — yelling at Waller and crying at times. She repeatedly asked him if it was worth it.

She said she didn’t know how to find the words knowing it was for a man with no heart and no conscience. She asked him if Jacque haunts him and if he saw the light go out of her eye.

She said Jacque knew he was capable of murder. She said it was over between him and Jacque when he threatened to kill the children. She said she’d rather be dead than stay with him.

While she was fearful, Jacque had found true happiness in the last year of her life, Brenneke told Waller. She said Jacque found someone who treated her with the respect she deserved and not as his “cash cow.”

Brenneke said from the time Jacque disappeared, there was no doubt in her mind that he did it. She told of how he flipped off the searchers and winked at her husband at a DFS meeting, saying he was going to get the children back.

“By the way, how dare you threaten to murder me  ...” she yelled. “That didn’t work out so well for you either, did it?”

While Brenneke’s parents and other family members were in favor of this plea deal, she was not. She said her family needed to bury Jacque.

She said at least by time he gets out of prison, they will be old enough to deal with his head games.

She said the family successfully protected the triplets from the truth for two years.

“Now they know you murdered their mother,” she said.

She said they were so mad, so sad and so hurt. She also criticized him for the way he had treated his older son from a prior relationship and told him that he was now a grandfather. His son, J.C., was in the courtroom.

She said she would like to think “a little jailhouse justice” is in store for Waller.

She told Waller that the children will have a good life with her and her husband but Waller robbed them of the most beautiful, loving mother they could ever have.  After Brenneke’s statement, the prosecutor played a recording made by the Wallers' son, Maddox, telling his father he never wanted to see him or a photo of him again and that they don’t like him anymore.

Teresa Ressel is a reporter for the Daily Journal and can be reached at (573) 518-3613 or at tressel@dailyjournalonline.com

• Must serve 85 percent prior to parole option

• Admitted to digging holes prior to murder

• Told where grave was in exchange for lighter sentence

“We only get to bury her because it benefited you! Not because you care so much about your children and what they were suffering. You simply didn’t care they were suffering and crying (themselves) to sleep at night. Now they know you killed their mom,” — Cheryl Brenneke, Jacque Waller’s sister.

Communities in Louisiana come together after disaster

These video clips, including the complete 27 minutes of the murder plea proceedings, are from Clay Waller's murder plea hearing held June 6, 2…

During the press conference at the Cape Girardeau County Jail, Sheriff John Jordan said he was happy Waller had to publicly confess to the mur…

Leave a message of remembrance

Read the complete obituary of Jacque and leave a message of remembrance.

KFVS-12 has reported Clay Waller pleaded guilty to his federal charge of making an Internet threat.

Family says they have to stay strong

Every morning, Stan and Ruby Rawson get out of bed, put on their clothes, and head out to handle whatever the day brings.

Jacque Sue Waller, a Jackson woman who went missing last week, had planned to move back to her hometown of Farmington.

Clay Waller has just been sentenced to five years in prison on his federal charge, according to the Southeast Missourian in Cape Girardeau.

"Clay Waller Sr., the man who told police his son confessed to killing Jacque Rawson Waller, has died Tuesday at a nursing facility in Cape Gi…

On Thursday, investigators made a discovery near where Jacque Rawson Waller‘s SUV was found abandoned June 2.

While he waits for his daughter to be found, Stan Rawson is reaching out to other women in abusive relationships.

Clay Waller sits down with his attorneys after entering the Cape Girardeau County Courthouse Thursday afternoon. Seated behind him are family members of Jacque Rawson Waller.

Visit www.dailyjournalonline for additional photos and video footage from inside the courtroom.

Cape Girardeau County law enforcement officers escort Clay Waller out of the courtroom after he enters a plea of guilty to second-degree murder.