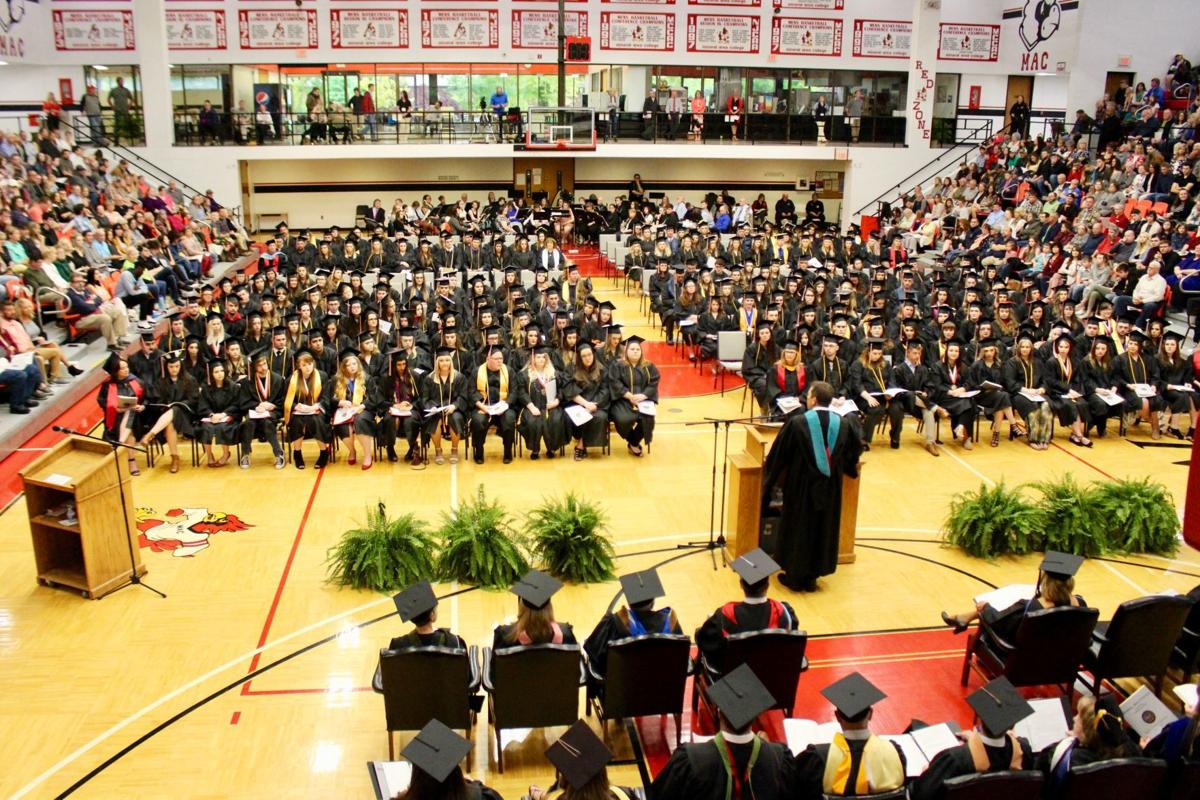 There will no lining up in the MAC hallways for commencement this year. But President Dr. Joe Gilgour is hoping for a recorded commencement. 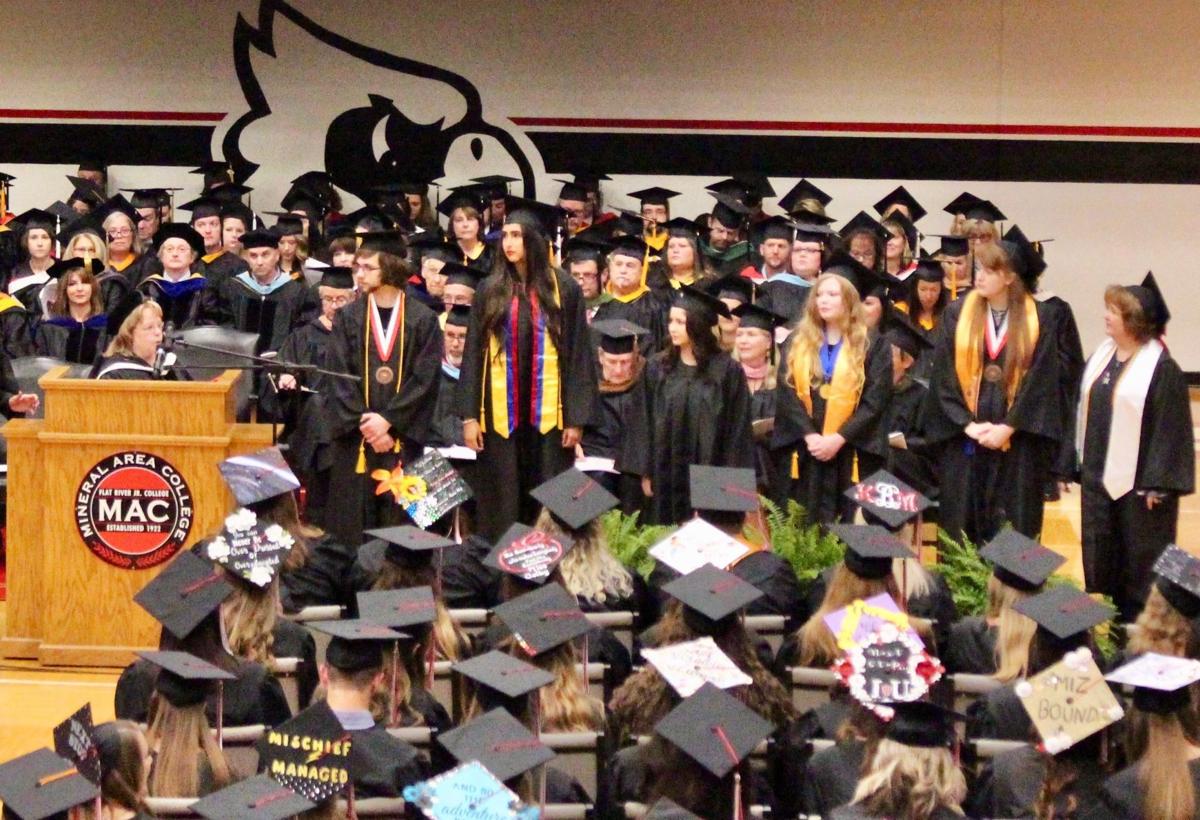 While there were 356 names on the graduation roll, not all participated in the ceremony.

Commencement exercises began with the playing of “Pomp and Circumstance” and ended with the "Fanfare and Recessional," both performed by the Mineral Area College Concert Band under the direction of Daniel Schunks.

After graduating from North County High School in 1994, House-Keller earned her associate degree in nursing from MAC in 1997 before beginning her career as a registered nurse. She then completed her Bachelor of Science in Nursing in 2009 through Central Methodist University.

House-Keller is currently serving her fourth year on the Bonne Terre Chamber of Commerce and served as its president in 2017. In 2015 she received the “Business Leader of the Year” award from the Daily Journal. In 2017 she received the “Alumni” award at the Women’s Community Luncheon at MAC. In the same year she was named “Citizen of the Year” by the Bonne Terre Chamber of Commerce.

House-Keller opened A1 Home Care in 2012, which employs 120 caregivers and serves 180 clients in numerous counties. Her passion to help others led her to open A1 Day Care Center in 2015 and A1 Transportation Services in 2017. She is active with the Missouri Alliance for Home Care and Adult Day Care Association and works with the backpack program which donates to local school districts.

Following the recognition of House-Keller, Division of Career & Technical Education Dean Roger McMillian announced that Kristen Wampler, a 2019 graduate of the MAC Radiology Program, is this year’s recipient of the Henry Y. Cashion Memorial Award for Radiology Excellence. The award recognizes exceptional performance by a Radiologic Technology student for the entire two-year period of enrollment. It is given to the graduating student who has maintained academic excellence, outstanding clinical performance and a professional rapport as defined by fellow radiologic technologists.

Wampler, of Park Hills, was selected earlier in the year to speak at the Community Ladies Luncheon and was recognized by the MAC Foundation Board as an inspiring student. She is graduating with a 4.0 GPA with her Associate of Sciences degree after completing her classroom training at MAC and clinical training at Washington County Memorial Hospital in Potosi.

In her introduction of Rep. Henderson, Hofstetter said, “Mr. Henderson grew up in Jackson, Missouri. He and his wife Cheri now live in Desloge. They have two children — their daughter, Amanda who attended Mineral Area College; and their son, Sean. They also have a 5-year-old grandson, Charlie.

“Mr. Henderson graduated from high school in Jackson in 1978. He graduated from Murray State College with a bachelor’s degree in science in 1982. In 1990 he earned a master’s degree from Southeast Missouri State and received an education specialist certificate in 1992.

“Mr. Henderson worked as an educator and administrator from 1983 to 2014 and has served as both a teacher and a coach. After a few years of retirement, he decided to run for the state representative seat representing St. Francois County. He was elected to the first two-year term in November 2016 and was re-elected for a second term in November 2018.”

Addressing the graduates on the topic of opportunity, Rep. Henderson said in part, “I’m asking you to blaze your own trail, challenge yourself, have fun, work hard and be successful at what you choose. Graduating today is a great accomplishment that guarantees you nothing but opportunity. The definition of opportunity is ‘a set of circumstances making it possible to do something.’ I am here to tell you that you are at the precipice of opportunity.

“I hope that all of you see this as not the end of a journey, but just the beginning of your journey. You’re so very fortunate. You have the whole world in front of you. You have the ability to make life whatever you want it to be. You have the opportunity. I implore you to use the skills you have received here at Mineral Area College to not only make your life better, but to always be part of the solution for the communities you eventually make home.

“Our communities need leaders. You can be one of those leaders. You can make a difference. We go to college for many reasons. One is to allow us to make more money to support ourselves and our family — but that is only one reason. It is so important that you take the role you have as a leader and give back to others and make life better for future generations. People before you have done this. They have taken those leadership roles so you could be here today, and I implore you to do that for future generations.”

"Graduating today is a great accomplishment that guarantees you nothing but opportunity." — State Rep. Mike Henderson

There will no lining up in the MAC hallways for commencement this year. But President Dr. Joe Gilgour is hoping for a recorded commencement.