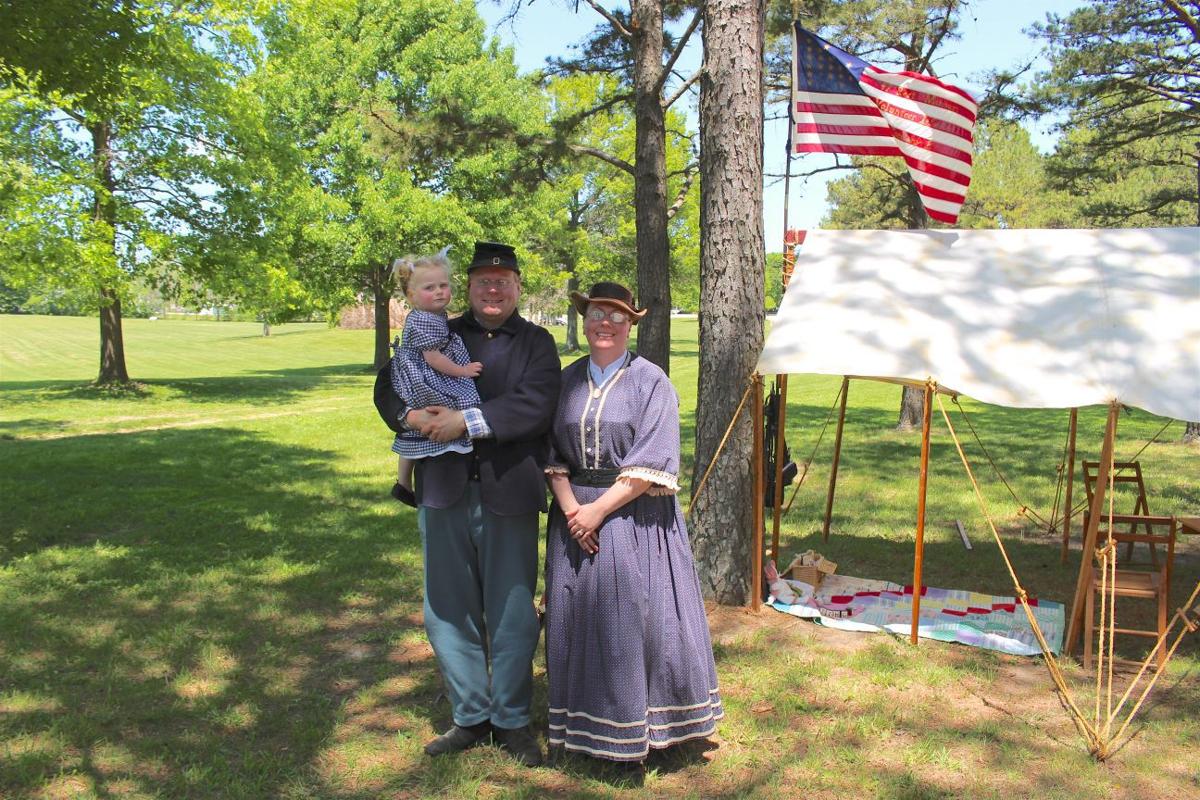 Christopher and Twyla Warren, along with their 2-year-old daughter, Abbie, are dressed out in Civil War period clothing at a recent camp held in Pilot Knob by the re-enactment group he founded and commands — the Gen. James R. McCormack Camp Sons of Union Veterans of the Civil War. 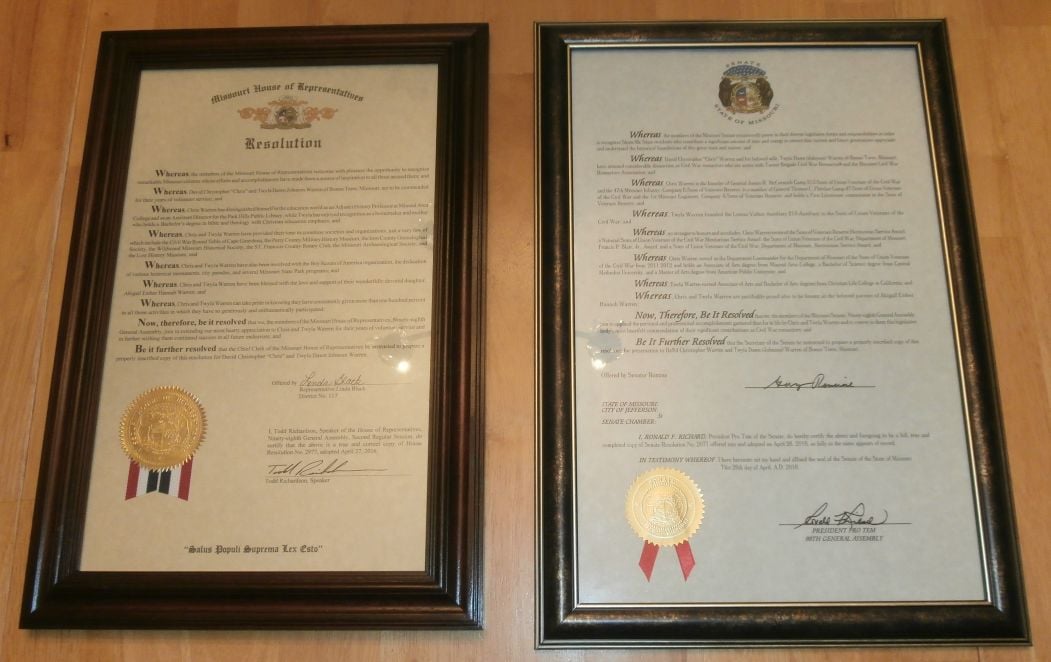 Christopher and Twyla Warren are honored with resolutions from both the Missouri Senate and House of Representatives for their years of providing Civil War programs and education throughout the region and state.

Christopher Warren and his wife, Twyla, were recently honored with resolutions from the Missouri Senate and House of Representatives for their years of volunteer service providing Civil War programs and education.

Warren, a Bonne Terre resident who grew up in the Arcadia Valley, said the Civil War has always been "deep in his blood."

"I would go to my grandparents' church sometimes to visit with them and I thought you had to be a minimum of 65 to even go there because a lot of the people were born in the 1880s or '90s," he said. "So, I got to hear one-generation-removed stories about the Civil War. Then my grandmother would jump on board and tell me how she had actually stayed with my great-great-great-grandmother, who was my Civil War ancestor's widow, taking care of her back in the early 1900s. That kind of sparked my interest.

"About the only common ground my dad and I had when I entered my adolescent phase was to talk about history. He would quiz me on the Civil War. I also liked to do re-enacting and dress up, trying to portray the soldier. I tried to join up whenever I was 12 years old with a re-enactment group. At that time they didn't really encourage that — especially kids without parents involved — so that kind of got put on hold."

Warren's re-enactment plans were further delayed when his father passed away from cancer right before the boy turned 13. Because of that, it wasn't until Warren turned 15 or so that he began re-enacting.

The founder of the 47th Missouri Infantry Company E of the Sons of Veterans Reserve, Warren also founded and commands the Gen. James R. McCormack Camp Sons of Union Veterans of the Civil War in the Mineral Area.

"The Sons of Veterans Reserve is kind of a military honor guard system branched off of them," he explained. "It falls under their military districts. They actually served back in the late 1800s/early 1900s as National Guard units and they trained soldiers for the Spanish American War and World War I. By about World War II, the guys were aging. Most of the Civil War veterans had died off by that time. By the 1950s, the Grand Army of the Republic was getting to the point where they only had a handful of guys and Congress legally transferred the GAR over into the Sons of Union Veterans of the Civil War.

"That kind of left the Sons of Veterans Reserve in limbo until the 1960s when the centennial re-enacting began to peak. So, through the 60s, 70s and into the 80s, they tried to branch away from necessarily being just re-enactors to being more of an educational honor guard with seven or eight military districts throughout the nation. You have a chain of command. I have a lieutenant colonel in the Branson area that's our district commander over eight states in the Midwest."

Warren served in another Sons of Union Veterans camp, but because there wasn't a camp in southeast Missouri, Warren decided to start one himself.

While Warren loves re-enacting, it's obvious that educating the public about the Civil War is of utmost interest and importance to both Warren and his wife — who hails from Ontario, Canada.

"Twyla and I have been doing programs for almost 10 years — since we've been married — and I probably started giving Civil War programs about five or six years before that," Warren said. "We've given programs to various Civil War roundtables around Missouri, different civic organizations, genialogical societies, historical societies — both on a local scale and regional. We've volunteered for at least seven different state parks or historic sites to where we've gone in and done programs or some type of Civil War educational living history.

"Most people just lump us in as just being Civil War re-enactors. We consider ourselves living historians. Re-enactors are sometimes out there portraying the role of a soldier or what-not. Some of these people are not able to interact with the public a whole lot or explain a lot of what they do. We go into public schools, do programs for at least a dozen different Scouting packs and troops and things of that nature over the years. We try to do a lot of hands-on, especially for kids. We bring things in. My swords and stuff are not sharpened. The guns are made so the kids can hold them. If we're going to fire them, we make sure they are a safe distance away."

The couple's 2-year-old daughter, Abbie, is even a part of the Civil War programs.

"She's been participating in our Civil War program since she was 2 months old — so, she's been doing it for over two years, herself," he said. "She loves dressing up."

At last year's Farmington School District annual Pioneer Day program for fourth graders, Abbie made quite an impact on the students playing with her Civil War period toys.

"I gave her a toy because it was the first kids program we had done for a while," Twyla Warren said. "She was just a little over a year old, so I figured she would sit and look at her toys — and she started laying them out on the floor. I got a little video of her organizing it all.

"Even now she isn't talking much, but I asked her, 'Are you setting up for the kids?' She nods her head and keep rearranging the toys. I said, 'Are you ready for the kids to come and do show and tell?' She looked at her daddy as if to say, 'Well, I'm ready if he is.'"

"Most people just lump us in as just being Civil War re-enactors. We consider ourselves living historians." — Christopher Warren

Probe shows WHO knew of sex claims in Congo

Probe shows WHO knew of sex claims in Congo

US calls for deescalation in Gaza

US calls for deescalation in Gaza

MSHP assisting in search for teen last seen in Belgrade

A search is underway for a Farmington teen reported missing last week and last seen in Washington County.

A man accused of driving his car under the influence of alcohol caused the wreck that took lives of her son, future daughter-in-law, and the c…

Leadwood has lost another police chief. And three out of four full-time officers.

A Bismarck man was seriously injured on Wednesday morning after attempting to avoid a wrong-way driver on US 67 in St. Francois County, accord…

A man appeared in Washington County last month where he was sentenced to prison for a sexual crime against a minor.

The St. Francois County Commission regular meeting was enlivened by a minor disagreement about a vehicle swap Tuesday morning.

The Missouri State Highway Patrol responded to a one-vehicle accident with injuries Sunday morning near Farmington.

Christopher and Twyla Warren, along with their 2-year-old daughter, Abbie, are dressed out in Civil War period clothing at a recent camp held in Pilot Knob by the re-enactment group he founded and commands — the Gen. James R. McCormack Camp Sons of Union Veterans of the Civil War.

Christopher and Twyla Warren are honored with resolutions from both the Missouri Senate and House of Representatives for their years of providing Civil War programs and education throughout the region and state.