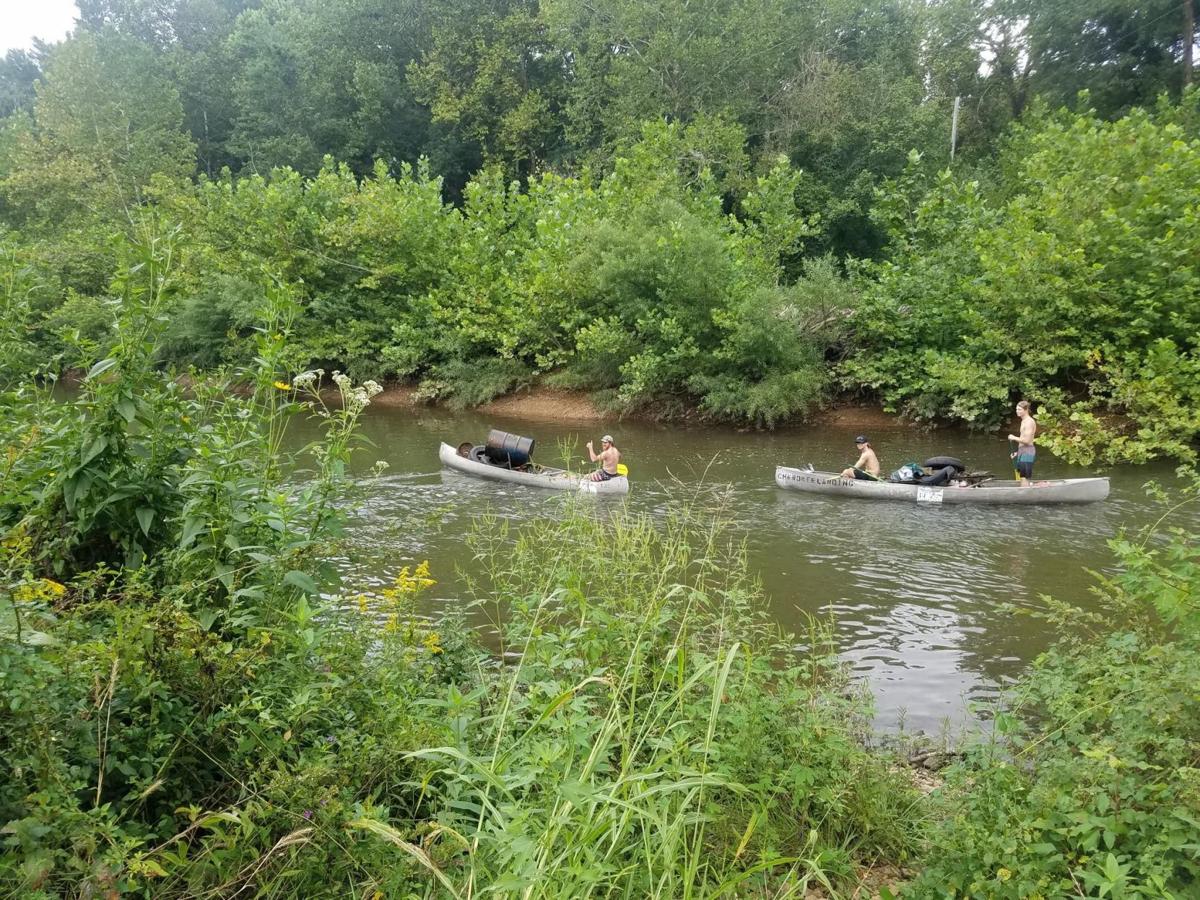 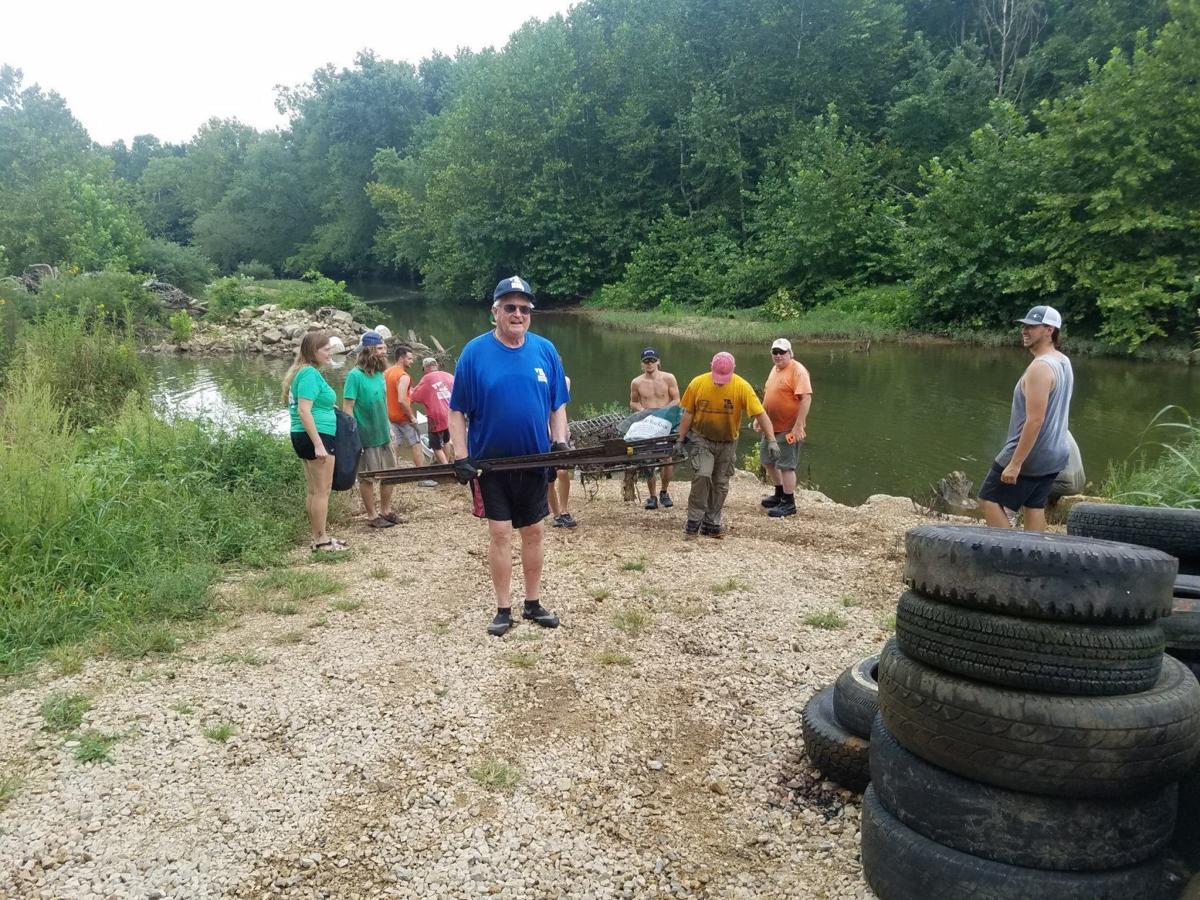 Members of Stream Team 1314 deposit trash and tires on the banks of Big River during the annual effort on Aug. 25. The cleanup stretched from Highway K Bridge to Mounts Swimming Hole. 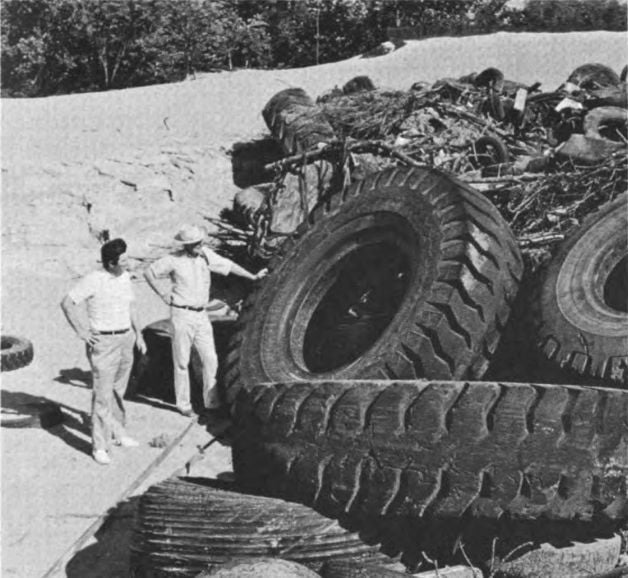 In the late 1970s, Big River flooding washed away a huge retaining wall made of tires that had kept Federal Mine tailings out of the tributary that flows into the Meramec River. Tailings were found to have been washed from Desloge, all the way to Washington State Park 30 miles away.

Members of Stream Team 1314 deposit trash and tires on the banks of Big River during the annual effort on Aug. 25. The cleanup stretched from Highway K Bridge to Mounts Swimming Hole.

In the late 1970s, Big River flooding washed away a huge retaining wall made of tires that had kept Federal Mine tailings out of the tributary that flows into the Meramec River. Tailings were found to have been washed from Desloge, all the way to Washington State Park 30 miles away.

Summer is winding down, but the weather’s still hot and plenty of people continue to flock to Missouri’s rivers, creeks and swimming holes.

If they’re enjoying a tributary of the Meramec River, they can thank volunteer organizations like Cherokee Landing Stream Clean Chapter 1314 for picking up the garbage and wrestling thousands of tires from the gravel riverbed since 1967.

Cherokee Landing co-owners Steve Anderson and Chrissie Bruner bought the campground and canoe outfitter, located on Big River just north of Bonne Terre, 12 years ago. The two regularly drop off canoeists on Big River’s banks under Highway K Bridge for a six-mile float that takes them past Big River Hills and St. Francois State Park, to wind up right where they parked at Cherokee Landing. They have a vested interest in the health of the river on which they live and work.

Every year since they bought Cherokee Landing, for the last weekend in August, Anderson coordinates a group effort, along with other Open Space Council Stream Teams, to pull trash and tires from the Meramec River and its tributaries, one of which is Big River.

Recently, their annual effort collected 324 tires from the K bridge to Mounts Swimming Hole in Irondale.

Anderson said the timing of the annual tire-and-garbage pickup is perfect.

“At this time of year the water gets lower and slower, you can see more stuff, the current’s not pushing you along, you’re not fighting it while you’re yanking up tires,” he said. “I have a lot of volunteers who have been helping out for years, and they can spot a buried tire by its shadow, pop one end up and yank it out in no time.”

Anderson said generally, a two-person canoe can carry eight tires comfortably, although he once saw a volunteer squeeze 19 tires into his canoe.

“That’s like Jenga, you pile them up and hope it doesn’t tip your canoe over, otherwise, you have to pull them out of the water all over again,” Anderson said.

And it’s not just a matter of wrestling the tires from underneath the gravel and lifting them out of the water. The gravel has to be removed so there’s less weight added to the tire dumpster waiting for them at St. Francois State Park. The tires are taken to a shredding and recycling plant in High Ridge.

“It’ll hold 400 tires,” Anderson said about the dumpster. “There’s one year we had 800 tires, when we first started. Two canoes out on our six-mile float, I can’t think they’re going to get more than 30 tires this year, though, it’s pretty clean. There’ll be plenty of other tires in the other areas where we’re going, though.”

Anderson said it’s been a long time coming, this relatively low number of tires retrieved from the banks and riverbeds of the 145-mile waterway that winds through two state parks, the Lead Belt, and empties into the Meramec near Eureka.

“We’ve had people come through (Cherokee Landing) who say ‘We used to call this the Tire River, but we don’t see any tires anymore, you guys must have done a good job,’” he said.

Most of the tires found in Big River are what Anderson called “legacy tires.”

“There’s some dumping, but it’s not as prevalent as it used to be. Newer tires are really rare. Maybe a quarter or less are deliberately dumped, or someone’s backyard flooded and tires that were in the backyard floated away,” he said.

Indeed, over the years Anderson’s seen a sort of timeline emerge among the tires.

“You’ll see wide whitewalls, I’ve seen tires off of a Model T before. Redwalls, which were for performance cars of the 1960s … I had one set aside one time, and somebody took it as a trophy,” he chuckled.

Why so many tires in Big River? Anderson said a 1977 flooding “catastrophe” can be thanked for that.

Back in the ‘50s, all the way to the ‘70s, farmers would sow crops right up to a creek instead of leaving a riparian zone, or strip of vegetation that helps prevent erosion.

“Believe it or not, they thought the environmental way to prevent erosion was to interlock tires together, run a cable through them, and lash them to the bank,” he said. “And if the cable stayed put, it worked. But if the cable came loose, or if a cable wasn’t even used, or if the land eroded behind the tires, all the tires would break lose and float into the river or creek during flooding.”

Anderson said, in Spring 1977, the flooding was so bad, that the six-story wall of tires gave way on the retaining wall for the Federal Mine chat dump near Big River, spilling tons of mine tailings and thousands of tires into the waterway.

“News stations in St. Louis had video footage of a river of tires roaring down,” he said. “And we’re still picking them up today.”

The tailings continued to pollute Big River for years to come. A Missouri Conservationist magazine from November 1979 noted that a Department of Conservation study found tailings had washed downstream as far as Washington State Park, about 30 miles below Desloge. Fish and all other aquatic life suffered from the influx.

Anderson said that within the last couple of years, the river has been remediated by the EPA.

“They’re trying to make basins to catch the chat, they call it the Newberry riffle, where the Flat River meets the Big River, they made a step-dam deal,” he said. “It has a big sediment bowl, so when the water slows down before it gets to the riffle, the sediment slides into the catching basin. Then they can go in with equipment and scoop it out. It seems to be an effective way to keep it from making its way down the river.”

He said he and the other veterans of Stream Clean teams have seen the difference, over the years.

“The river’s slowly healing itself,” he said. “It takes time, but it’s happening.”

World Cleanup Day is Saturday and one area resident is looking for volunteers to participate in the worldwide cleanup event on a local level.