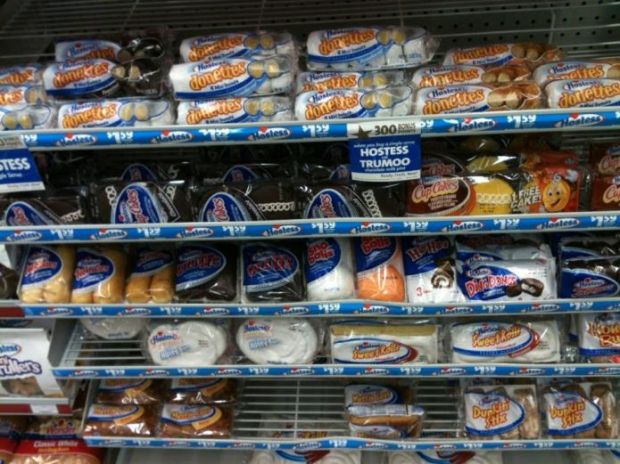 Other Hostess and Dolly Madison favorites will be returning soon to a store near you. These products include CupCakes, Donettes, Zingers, Ho Hos, Ding Dongs, fruit pies and mini muffins. 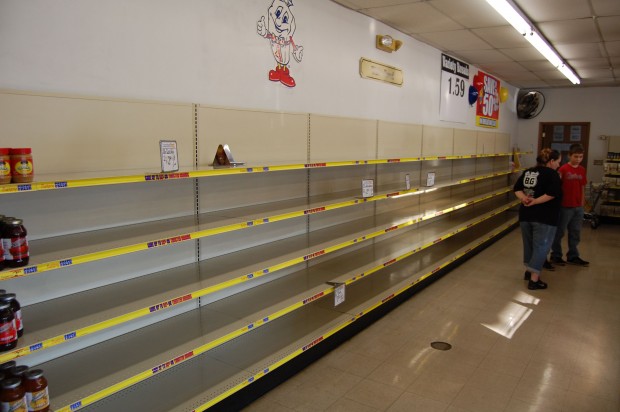 Rows and rows of empty shelves were all to be found at the Hostess Bakery outlet on State Street in Desloge when it closed its doors in November. Although the Twinkie will be making its comeback later this month, Hostess Bakery outlets and the many jobs lost by loyal employees will not be returning. 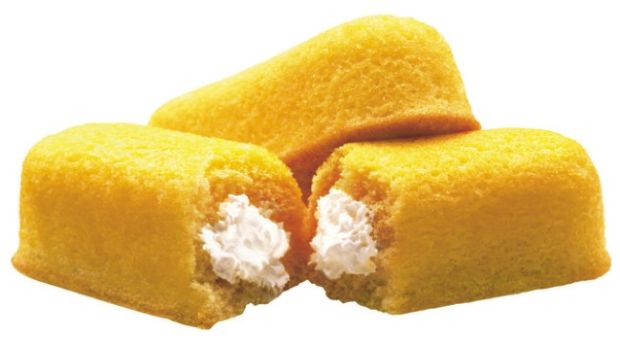 Who would have thought the idea of living without a small, rectangular cream-filled spongecake would cause so much upset in the hearts of so many? With the Twinkie’s imminent return, Americans can focus their attention on bringing back other dearly departed food favorites like Heinz purple "EZ squirt" ketchup, Teenage Mutant Ninja Turtles cereal and Crystal Pepsi.

Unemployment may remain stubbornly high and consumer confidence depressingly low, but there is some good news to help brighten the pessimistic mood felt by many Americans — on July 15 the Twinkie is making a comeback.

That’s right, folks. The announcement was made recently by Daren Metropoulos, principal of Metropoulos & Co., one of the two companies that bought the rights to Twinkies and other snack brands from the bankrupt Hostess Brands earlier this year.

The bankruptcy meant the closure of 33 bakeries, 565 distribution centers, approximately 5,500 delivery routes and 570 bakery outlet stores throughout the United States.

Monday, Nov. 19, 2012 was the black letter day for Twinkie fans living in the Parkland when the Hostess Bakery outlet on State Street in Desloge closed its doors. Before that inauspicious day, almost all of the Twinkies in America had been grabbed off of retailer shelves by its disbelieving fans. Some stories claimed that boxes of the cream filled sponge cake were selling at online auction sites for $100 or more. The Desloge outlet was completely out of both Twinkies and Wonder Bread by the previous Friday.

A little Twinkie history for you

So, how did the Twinkie become a favorite “guilty pleasure” of many red-blooded Americans?

In the 1920s and '30s, Continental Bakeries sold baked snacks under the Hostess brand name. Many of the snacks were seasonal and contained fruit filling. Hostess Little Shortbread Fingers were made with strawberries, so for several months of the year the equipment used to make them sat idle because strawberries weren't available.

The company’s vice president, James Dewar, wanted to make a product that could use that equipment year-round and thus improve efficiency. His idea was to create a simple sponge cake enhanced by a flavored cream filling. On the way to a marketing meeting, he saw a billboard advertising Twinkle-Toe Shoes. And so it was that the Twinkie was born in 1930.

The first Twinkies were quite different from the ones we know today. For one thing, they were made with banana cream filling — not vanilla. You see, in World War II, there was a banana shortage and so vanilla became the standard flavor.

The eggs, milk and butter in early Twinkies gave them a shelf life of only two days. Dewar had his salesman replenish store shelves every other day, but that quickly became too expensive. The need for a longer shelf life led to a number of changes in the Twinkie recipe. It’s those recipe changes that led to the modern Twinkie having a much longer shelf life than the ones made in 1930.

A variety of myths and urban legends have sprung up around the Twinkie's longevity, claiming that it stays fresh for decades, would survive a nuclear war and that the company is still selling off the original batch made in 1930 — still fresh almost 80 years later. In fact, according to the Snopes.com website, a Twinkie's shelf life is officially 25 days.

Another misconception is that Twinkies are chemically preserved. Not true. Most of the chemical ingredients are replacements for the ingredients that allow a Twinkie to spoil, but they aren't preservatives alone. Replacing eggs, butter and fats is what keeps Twinkies from going rancid. In fact, the airtight plastic packaging does far more to keep the cakes fresh than any of the actual ingredients do. Therefore Twinkies will stay fresh a really long time as long as you never bother to open them.

There are claims of Twinkies that have lasted for decades. USA Today reported about one kept in a high school science classroom for 30 years. While it is true that the Twinkie continues to exist — like pretty much anything in a sealed plastic wrapper would — it was described as brittle. Reports that it is probably still edible are unlikely, since no one seems willing to put that theory to the test.

The new Twinkies box will look very similar to the old one, with the addition of the line “The sweetest comeback in the history of ever.” The price will stay the same as last fall when Hostess shut down — $3.99 for a box of 10. Other products will also come back with the same pricing.

"America wanted Hostess back — they wanted the original," said Metropoulos.

And that’s just what they’re getting ... along with some other old favorites.

The new company will sell all of the Hostess and Dolly Madison branded snack products, including CupCakes, Donettes, Zingers, Ho Hos, Ding Dongs, fruit pies and mini muffins. Some products, such as Sno Balls, will take a little longer to return to grocers’ shelves, but they should be available within the next few months.

How about other their Hostess brands like Wonder Bread and Drake's snack cakes? Well, they have been sold to other firms and details of their return have yet to be announced.

Wonder Bread, Twinkies and other Hostess products had seemingly gone the way of the dinosaur in November, when Hostess Brands Inc. filed with the bankruptcy court to liquidate its 82-year-old business following a crippling strike by the Bakery Workers union.

While the Twinkie’s former company is out of business and the majority of its 18,500 employees lost their jobs, a bankruptcy court has been overseeing an auction of its various brands as part of the liquidation process.

‘The king is dead! Long live the king!’

Everyone thought the Twinkie was gone for good, but now it’s back again. The new snack company, Hostess Brands LLC, was purchased for $410 million by private equity groups Apollo Global Management (APO) and Metropoulos & Co. It also bought five of the closed bakeries as part of their bid. It will produce the products out of four of the bakeries — in Columbus, Ga., Emporia, Kan., Indianapolis, Ind., and the Chicago suburb of Schiller Park, Ill. The company says it plans to have about 1,800 employees making the snacks within the next three months.

While all this may be good news to St. Francois County residents, on Friday there were a few posters on the Daily Journal’s Facebook page who voiced their serious reservations.

Then there was Gary Boyer who wrote, “Everybody is making such a big deal about the Twinkie’s return. I think in order to show the new company we can survive without them, I don't think anybody should buy them on the release date.”

Sentiments like these might cause the Twinkie’s new owners to feel more than a little uncomfortable, but then misters Elrod and Boyer are probably outnumbered by the likes of Daily Journal poster Quincy Anderson who might want to consider applying for a job with Hostess Brands LLC’s PR department.

Wrote a clearly excited Anderson, “You can dip them in chocolate and freeze ’em, you can deep fry ’em, or just eat ’em plain! Whatever your taste buds’ desire, Twinkie can always satisfy!”

An inmate previously housed at the Eastern Reception, Diagnostic and Correctional Center (ERDCC) in Bonne Terre was sentenced in St. Francois …

Drivers on Nelson Street near Liberty Street might have found the road a bit icy Friday morning, the remnants of a residential fire that broke…

Easter retires after 36 years with SFCAD

After four years of hard work, the funding is in place, the contractors were lined up and the ground was officially broken, Dec. 20, for the a…

Biden: US troops won't be moving into Ukraine

Biden: US troops won't be moving into Ukraine

What are these weird looking 'spider formations' that were spotted on Mars?

What are these weird looking 'spider formations' that were spotted on Mars?

Other Hostess and Dolly Madison favorites will be returning soon to a store near you. These products include CupCakes, Donettes, Zingers, Ho Hos, Ding Dongs, fruit pies and mini muffins.

Rows and rows of empty shelves were all to be found at the Hostess Bakery outlet on State Street in Desloge when it closed its doors in November. Although the Twinkie will be making its comeback later this month, Hostess Bakery outlets and the many jobs lost by loyal employees will not be returning.

Who would have thought the idea of living without a small, rectangular cream-filled spongecake would cause so much upset in the hearts of so many? With the Twinkie’s imminent return, Americans can focus their attention on bringing back other dearly departed food favorites like Heinz purple "EZ squirt" ketchup, Teenage Mutant Ninja Turtles cereal and Crystal Pepsi.