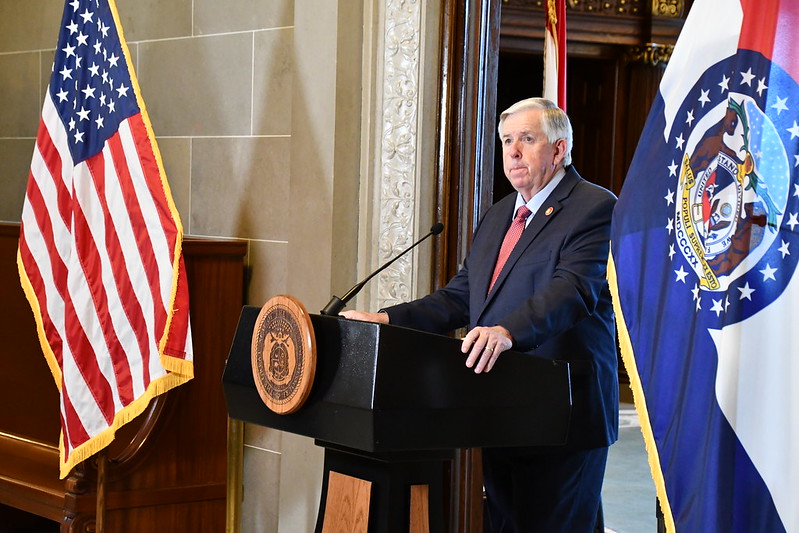 Missouri Gov. Mike Parson has appointed two attorneys general during his tenure, with the last two people to hold the office leaving after successful Senate campaigns (photo courtesy of the Missouri Governor's Office).

A top staff member in the governor’s office will be Missouri’s next attorney general.

Andrew Bailey, 41, who has served as general counsel for Gov. Mike Parson for the last year, will replace Attorney General Eric Schmitt, who was elected to the U.S. Senate earlier this month.

Bailey will complete Schmitt’s term, which ends in 2024.

Parson made the announcement Wednesday morning before the Thanksgiving weekend. According to the governor’s office, Bailey has roughly eight years of professional experience as an attorney, including stints working as an assistant prosecuting attorney in Warren County and as an assistant attorney general. His previous jobs in the Parson administration were as deputy general counsel for the governor and general counsel for the Missouri Department of Corrections.

He is an army veteran that was awarded two Army Achievement Medals, an Army Accommodation Medal, a Combat Action Badge and two Bronze Star Medals for his service.

“My entire career has been defined by public service, and now I’m ready to continue that service as your Attorney General,” he said, “where I will work tirelessly to earn your trust and never stop fighting on your behalf.”

Bailey has been Parson’s top choice for the job all along. But his appointment has not been greeted by universal support among Republicans.

On Tuesday, Jackson County Republican Chairman Mark Anthony Jones sent a letter to the governor on behalf of his organization begging Parson not to appoint Bailey.

“PLEASE DO NOT appoint Andrew Bailey as Attorney General for Missouri!!” the letter said. “He has little experience in the attorney general’s office, and what he has is from Democrat Chris Koster’s office. He has only been an attorney for eight years. There MUST be other choices.”

On Wednesday, Bailey pushed back on any suggestion he doesn’t have the needed experience to be attorney general.

Parson said one of his top considerations on who to appoint was stability in the office that has seen the last two incumbents leave for higher office.

“Stability was critical when considering the next attorney general,” Parson said.

Bailey vowed to run for the office in two years.

Parson said Bailey was critical to much of the governor’s agenda over the last few years, pointing specifically at efforts to “end elective abortions in Missouri.” and “strengthen the Second Amendment protections.”

He also gave Bailey credit for efforts the governor’s office has made to close over 2,000 clemency files and fill more than 100 judicial openings.

In the weeks leading up to the announcement, The Independent and other media have filed requests under Missouri’s Sunshine Law for access to records documenting internal discussions with Bailey about the appointment. The office has said the records may not be turned over until January, after the new attorney general will already be sworn into office.

Kelli Jones, Parson’s taxpayer-funded spokeswoman, has ignored inquiries about the records requests and whether the governor would consider expediting the release of those records.

Asked about whether the governor’s office should release the records quickly, Bailey didn’t answer directly, saying “the people out there absolutely deserve a government that is responsive and transparent.”

During his tenure with Parson, Bailey has kept a relatively low public profile.

His closest brush with headlines came after records revealed he helped craft talking points the governor’s office used to advocate for the criminal prosecution of a journalist who uncovered a security problem in a state website.

According to Bloomberg News, one of the eight steps included opening a new tab in Google Chrome.

That effort by the governor’s office was widely panned, and a 158-page investigative file produced by the Missouri State Highway Patrol and Cole County prosecutor showed no evidence of anything that even resembled computer hacking.

Asked about the push to prosecute a journalist Wednesday, Bailey stood behind the office’s strategy.

Schmitt got the job in 2018, after then-Attorney General Josh Hawley was elected to the Senate.

“Few Missouri governors have had the opportunity and responsibility to appoint an attorney general on the behalf of the people of Missouri once,” Parson said, let alone twice.”

Parson will also have to pick a new state treasurer. Scott Fitzpatrick, who was appointed treasurer in 2018 and elected to a full term in 2020, won the race for state auditor on Tuesday.

Originally published on missouriindependent.com, part of the TownNews Content Exchange.

'I don’t know where I’m going to go': HUD displaces even more residents in this small Illinois city

The streets of Cairo, Illinois, are lined with boarded-up buildings and empty lots. Now the federal agency is set to gut the city of some of its last affordable housing.

Attorneys for a St. Louis man sentenced to die for a murder he committed when he was 19 asked the Missouri Supreme Court Monday to delay his execution to allow for a hearing on alleged constitutional violations in his original trial. Kevin Johnson was convicted in 2007 of killing a police officer. He is scheduled […]

A Branson-based Christian summer camp was sued last week by a former camper who alleges it concealed knowledge of a staffer's sexual misconduct to convince the camper's family to sign a settlement and non-disclosure agreement.

Missouri state budget is bulging with $6 billion in surplus cash

For the first time in its history, the only real limit on what Missouri can buy on a cash-and-carry basis is the imagination of the people spending the money. The state treasury is bulging with more than $6 billion in surplus cash, the result of 28 months of double-digit revenue growth and federal payments tied […]

The Missouri Supreme Court is expected to decide soon whether or not to delay the execution of Kevin Johnson, a St. Louis man sentenced to die for a murder he committed when he was 19.  The execution of Johnson, who was convicted in 2007 of killing a police officer, is scheduled to be carried out […]

An aging electric grid, fossil fuel power plant retirements and a massive renewable electricity buildout are all contributing to a boom in transmission and distribution wire projects by electric utilities across the country. In 2020, investor-owned electric utilities spent $25 billion on transmission, up from $23.7 billion in 2019, figures that the Edison Electric Institute, which […]

This story was originally published by Investigate Midwest.  The Environmental Protection Agency is charged with protecting important waterways from pollution, but manure from concentrated animal feeding operations, or CAFOs, continues to harm waterways — and only one-third of the largest facilities have a federal permit. EPA permits require CAFO operators to tell the agency how […]

When she was 13, Dakota Hommes felt scared and alone. She was having a crisis, didn’t feel she could talk to her parents about it and worried about her future. “At 13, I wasn’t sure that I would make it,” she said. Then, at a library, she found the novels “Parrot Fish” by Ellen Wittlinger […]

The post Opposition growing to Missouri Secretary of State rules on library materials for children appeared first on Missouri Independent.