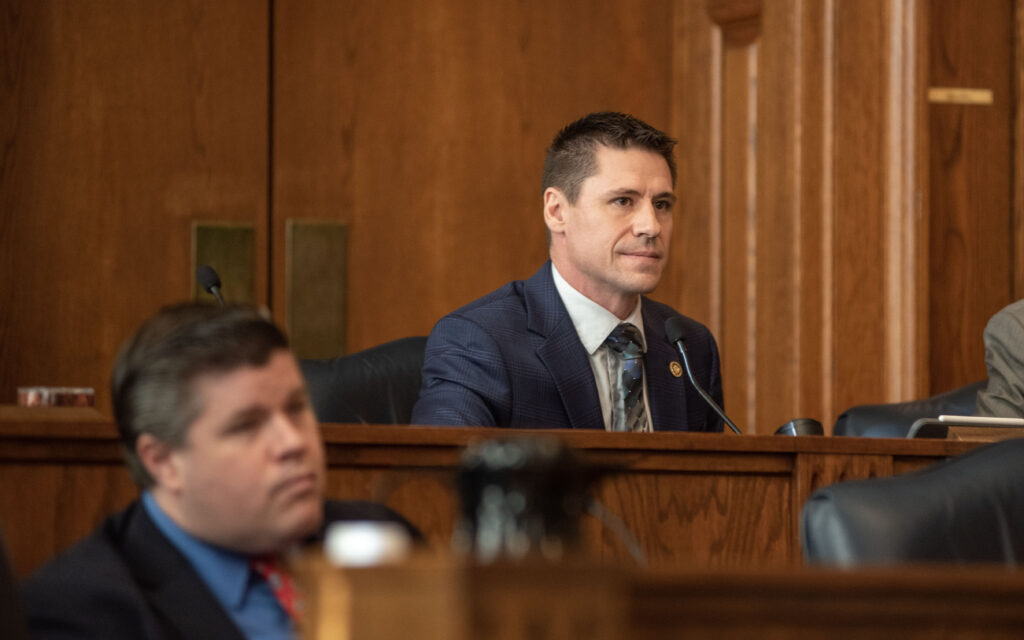 Neon Liebson, a transgender student from St. Louis, says his name into the microphone at the Senate Education and Workforce Development Committee meeting Tuesday. He and other students who missed school to testify did not get to give their comments, but the committee acknowledged them by allowing them to say their names. (Annelise Hanshaw/Missouri Independent)

A Senate committee removed a controversial proposal targeting transgender athletes from a wide-ranging education bill Tuesday, but the committee’s chair indicated more debate to come on the issue.

On a six to three vote along party lines, the Senate Education and Workforce Development Committee approved legislation that would dictate how history and race are taught in Missouri classrooms, as well as establish a statewide transparency portal for public schools, among other provisions.

The legislation — which is an amalgamation of three separate bills — seeks to enshrine parent rights, establish a statewide website for school curriculum and bar schools from teaching critical race theory.

Cut from the bill was a portion that would bar transgender girls from competing according to their gender identity, a topic that dominated the lion’s share of testimony against the proposal during Tuesday’s hearing.

Sen. Rick Brattin, a Harrisonville Republican sponsoring one of the bills, said the provisions were designed to “protect women in athletics.”

But for those who traveled to the Capitol to testify against the proposal, including students and parents, the excised language unfairly targeted an already vulnerable population.

“Please let our kids play without a fear of being outed, shame or questions. Just let them play the games they enjoy,” she said.

The at times heated hearing is expected to repeat Tuesday evening, when a litany of bills regarding transgender students and LGBTQ rights in general are being heard by a Missouri House committee.

The bill passed Tuesday is sponsored by Sen. Andrew Koenig, a Manchester Republican and the education committee’s chairman. He made it clear as witnesses spoke Tuesday that he “had no intention of having that in the bill,” referring to the transgender athletics proposal.

“I believe there’s other committees and other bills that are going to be addressing that issue,” he said. Neon Liebson, a transgender student from St. Louis, says his name into the microphone at the Senate Education and Workforce Development Committee meeting Tuesday. He and other students who missed school to testify did not get to give their comments, but the committee acknowledged them by allowing them to say their names (Annelise Hanshaw/Missouri Independent).

As Tuesday’s committee meeting wrapped up, with many who hoped to testify not getting the chance, tempers flared.

“That’s enough, that’s enough,” Koenig yelled at parents and students who confronted him as the hearing drew to a close.

While the bill no longer bans transgender girls from participating in school sports, many of its provisions still generated controversy.

Six students, three as young as 11, were prepared to testify against the bill but were not able to speak before the committee voted on the legislation.

Alissa Barnholtz, a Parkway Central High School junior, and Clara Bass, a Lafayette High School sophomore, traveled to the Capitol to oppose Brattin’s bill. They are part of a group of students with Cultural Leadership, a program that trains students to become social justice advocates.

“Students’ learning shouldn’t be a political issue. There shouldn’t be bills restricting students trying to learn,” Barnholtz said in an interview with The Independent after the hearing concluded.

She’s worried the bill would restrict her history class to teaching a narrow perspective.

“We’re all just trying to learn in the most raw and unfiltered way as possible. And there are bills trying to tell us students what we can and cannot learn,” she said. “It just isn’t fair.”

Bass noticed books being banned in her school library and other restrictions placed after Rockwood School District parents accused the district of teaching critical race theory — a concept she doesn’t believe is taught in her high school but said others might think it is.

She said some have the wrong interpretation of what is going on in schools.

“People have just such a warped misunderstanding of what these lessons actually are,” she said. “No one is making me feel guilty when teaching me about slavery. “

The bill passed by the committee doesn’t define critical race theory but gives examples of what kind of concepts would be banned, such as “individuals should be adversely or advantageously treated on the basis of individual race, ethnicity, color or national origin.”

Critical race theory, according to a Columbia News article, is a study of how racism has affected United States society and law.

He said parents should get more control, accusing schools of “a lot of questionable things.”

“Schools are now worried about being able to teach [critical-thinking] skills and offering different viewpoints and lenses out of fear that it may offend a parent who then will use legislation like this to file a lawsuit,” Arthur said.

Originally published on missouriindependent.com, part of the TownNews Content Exchange.

Kansas City is the only major city in the country where the city’s elected leaders don’t control the local police department — a state-appointed police board does. Up until 2013, St. Louis was in the same boat.  However, the city gained local control of its police department after a 2012 statewide referendum.  Now 10 years […]

The Missouri Association of Realtors, an organization that spent millions in recent years on two successful initiative petition campaigns, is warning lawmakers it will oppose anything more than tinkering with the way the constitution is amended by voters. During testimony Tuesday before the House Elections and Elected Officials Committee, Sam Licklider, lobbyist for the realtors, […]

The Neiss family drove from St. Louis to Jefferson City on Tuesday, a trip they’ve made many times over the past four years. The reason is always the same: Legislation they fear will harm their transgender son. On the agenda Tuesday night in the House General Laws Committee were a litany of bills aimed at […]

The Missouri Supreme Court heard arguments Tuesday from the state’s attorney general opposing yet another local prosecutor’s attempt to argue the innocence of a man convicted of murder. This time the case was for Michael Politte, a man who was charged with murdering his mother in 1999 when he was 15.  In May, former Washington […]

A Cole County judge has ruled that a rule implemented by the Missouri House in 2019 allowing lawmakers to withhold certain information from public records does not violate the state constitution.  The lawsuit was filed by Mark Pedroli, founder of the Sunshine and Government Accountability Project. He challenged a rule adopted by the Missouri House […]

A drag performance last week at a diversity event attended by Columbia middle schoolers was “high-brow and innocent,” not the salacious sexual display alleged by Missouri Republicans, the marketing director for the group behind the performance said Sunday. At the annual Columbia Values Diversity Breakfast, timed to be near the Martin Luther King Jr. holiday, […]

Extensive searching has yielded no signs of Aaron Duenke, who took off on an ice floe on Dec. 27.

WASHINGTON — Nearly 80 Democratic members of Congress sent a letter to the White House expressing their “great concern” that the Biden administration is walking back on its promise to restore migrants’ access to asylum. In the letter, they also condemned the administration’s expansion of a controversial policy that immediately turns away migrants at the U.S.-Mexico border, […]

This Day in History: Gandhi is assassinated