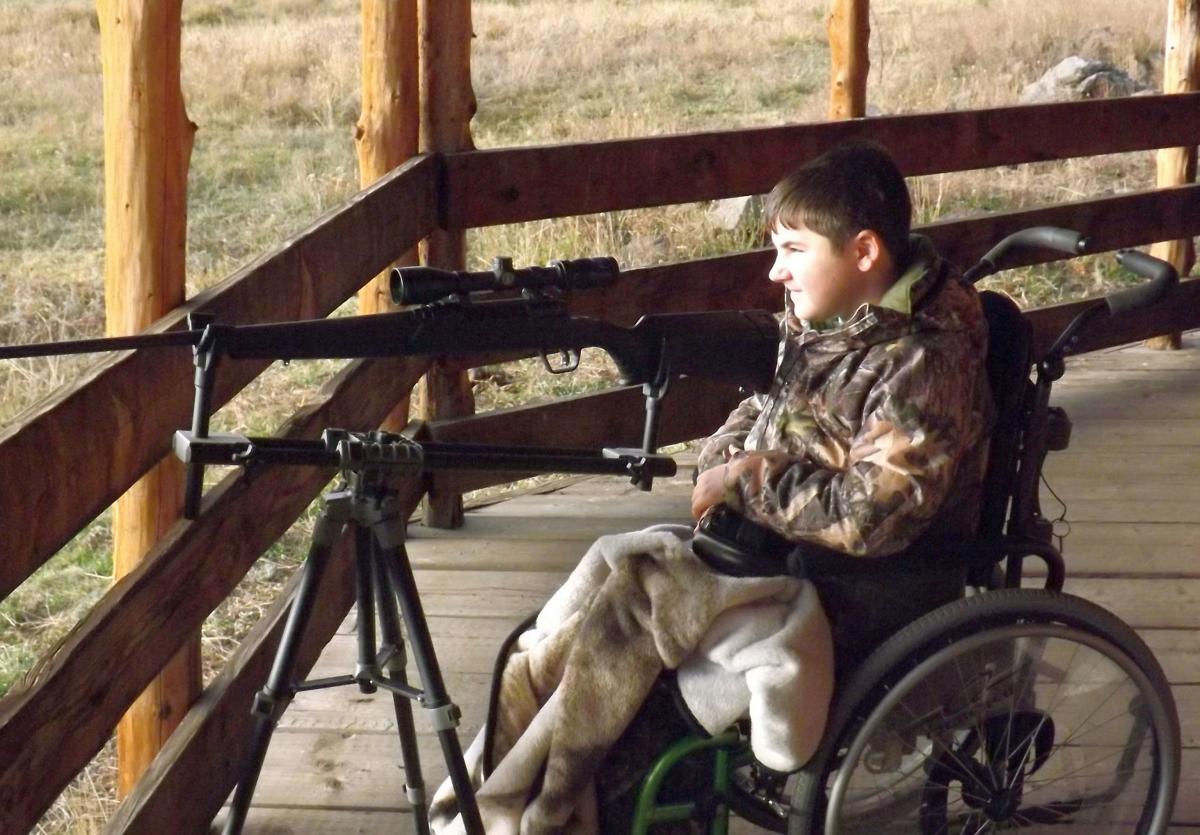 Justice Bowman is set up to hunt the first morning at Sprucedale Ranch in Alpine, Arizona. 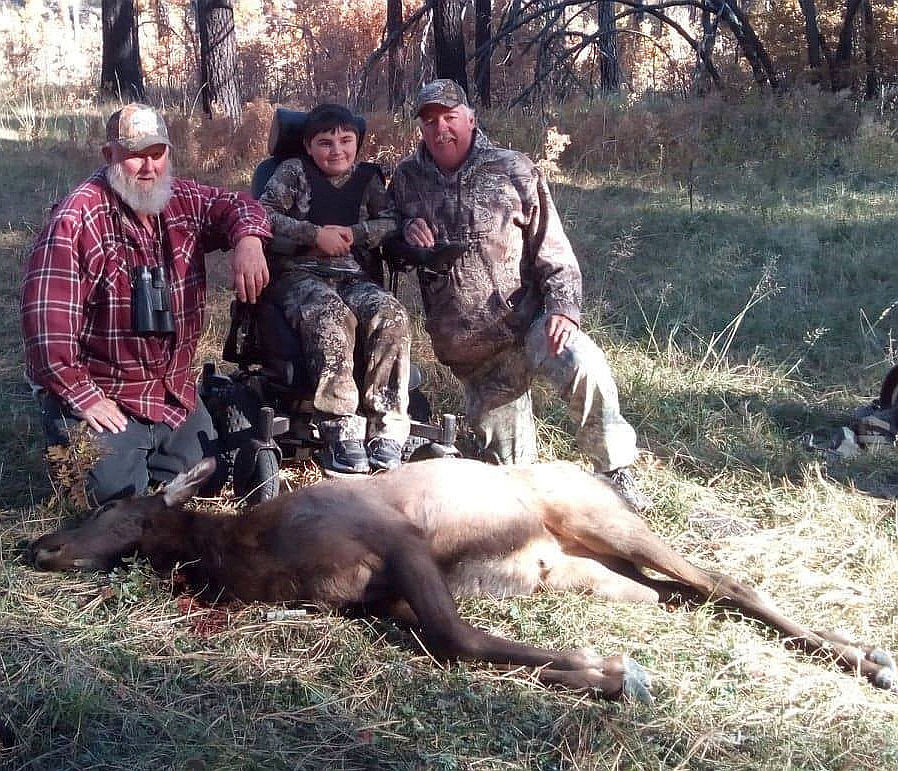 Justice Bowman is pictured with hunting guides, John and Pat, after he got his elk in Arizona. 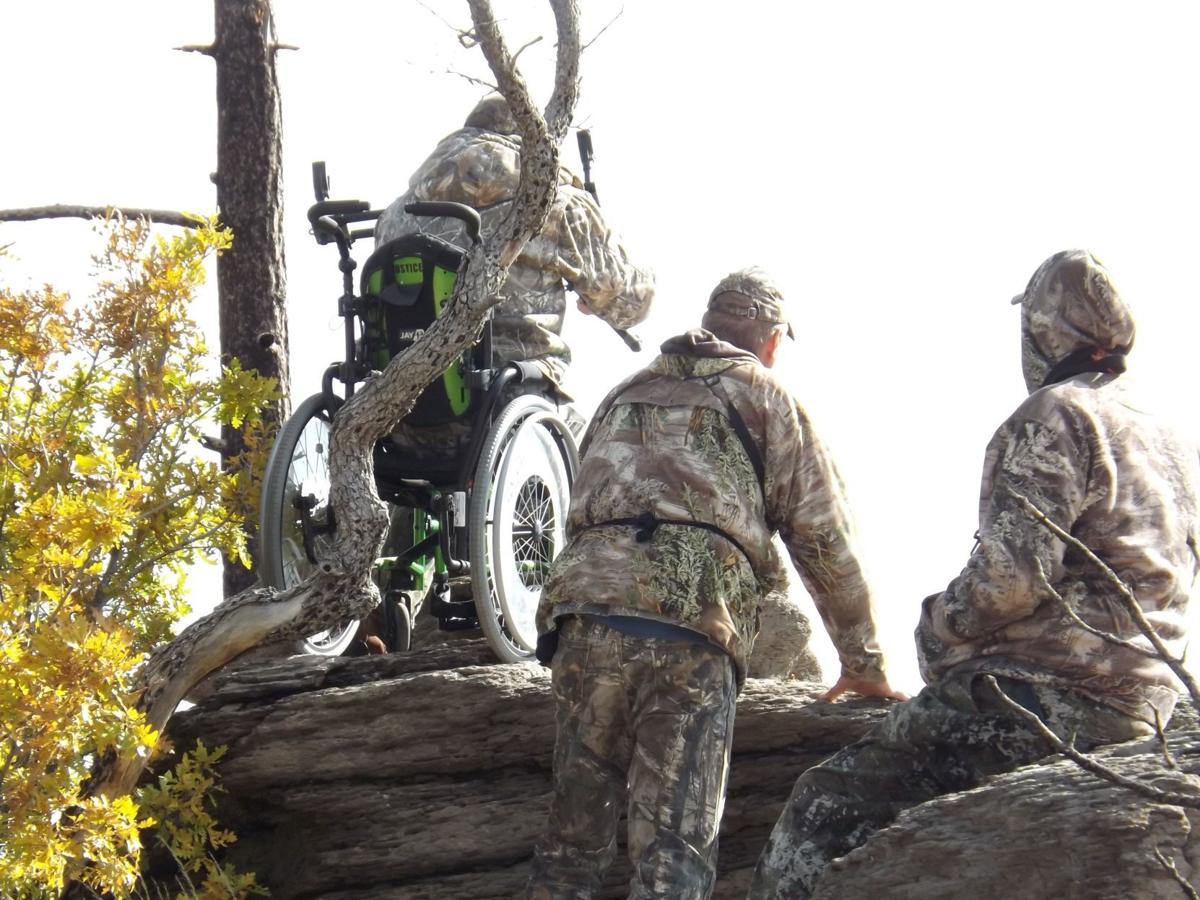 Justice Bowman is ready to hunt off of a rock in the White Mountains, approximately 8,900 feet above sea level. 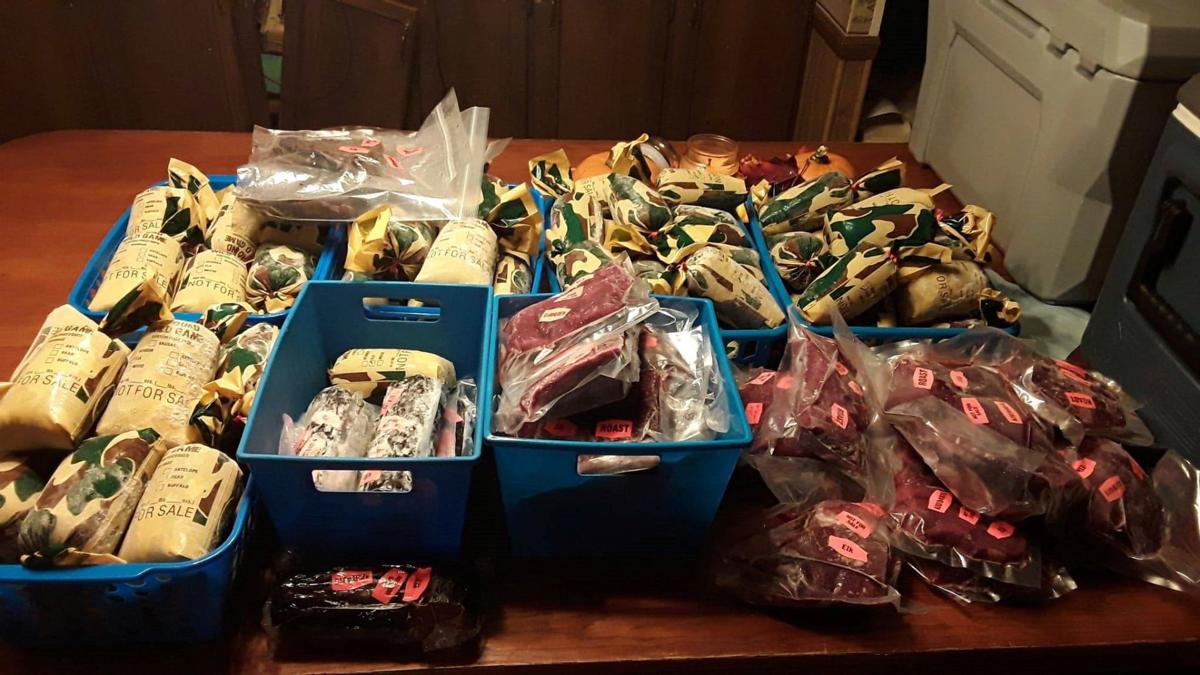 Justice Bowman brought home with him 165 pounds of elk meat ready for the freezer.

Justice Bowman is set up to hunt the first morning at Sprucedale Ranch in Alpine, Arizona.

Justice Bowman is pictured with hunting guides, John and Pat, after he got his elk in Arizona.

Justice Bowman is ready to hunt off of a rock in the White Mountains, approximately 8,900 feet above sea level.

Justice Bowman brought home with him 165 pounds of elk meat ready for the freezer.

Life is full of limitations whether they be food allergies, weight limits or even things we have grown accustomed to such as the speed limits on our roads, but for some limitations are just an obstacle to conquer.

Justice Bowman, 13, of Fredericktown, has been facing limitations due to a genetic disorder called Duchenne Muscular Dystrophy, DMD, which causes muscles to waste away. However, with the help of some very special family members and friends, he still finds a way to do what he loves, hunt.

“Currently there are no treatments or cures for DMD,” Justice’s mother Missy Bowman said. “The first muscles that are affected by this are leg muscles.”

Due to DMD, Justice has been in a wheelchair for about a year and a half now. He has not let this slow him or his love of hunting down.

Justice recently went on a hunting trip to the White Mountains in Arizona where he was able to hunt elk.

“Justice really enjoys hunting,” Missy said. “This hunt is the first one that Danny (his dad) has went on with him. Justice’s normal hunting buddies are his Pa Pa and his Uncle Les.”

Missy said Justice has been able to go on two disabled youth managed deer hunts at Mingo Wildlife Refuge where he took down a six point buck in 2018 and a 10-point buck in 2019.

“This year Justice was able to enjoy hunting a little more, because of his all terrain outdoor wheelchair that he received in July,” Missy said. “The chair has given him the opportunity to be more independent outdoors.”

As the Bowmans were looking for more resources such as the all terrain outdoor wheelchair, they came across Hunt of a Lifetime, HOAL.

“HOAL provides hunting dreams for children with terminal illness,” Missy said. “The process to apply was pretty easy. There was a packet of forms that had to be filled out by parents, doctors and the child. Justice had to pick out an animal that he would like to hunt and write an essay on why this is his dream hunt.”

Justice’s pick was elk. He said he wanted to hunt them because they are so big and have a lot of meat.

Once Justice picked what he wanted to hunt, a lot of working parts and special people came together to make this once-in-a-lifetime hunt possible for him. In the end, Justice, his uncle Les Provow and his father Danny left Fredericktown on their 20-hour journey to Springerville, Arizona, Oct. 16 to hunt in the White Mountains.

“They saw several elk throughout the trip,” Missy said. “They were amazed at how big they were.”

Missy said, on day five of the hunt, Justice shot a 1-year-old bull calf at 86 yards, weighing about 165 pounds skinned.

“It felt good,” Justice said. “I thought I was not going to get one.”

“Pat Beard and the other hunting guides in Arizona planned all the details of the hunt, as well as spent time scouting, before Justice arrived and also spent their week with them during the hunt,” Missy said. “They treated them like their own family.”

HOAL provided Justice with a shopping spree to Bass Pro Shop to purchase clothing for the trip, a 7 mm-08 rifle that was modified so Justice could pull the trigger on his own, provided the supplies for the taxidermy and covered all of the travel expenses.

Missy said some local businesses came forward to help make the hunt a success. She said Court Square Pawn allowed the firearm to be sent to them, as well as donated hearing protection, and Ozark Mountain Taxidermy donated time and will be mounting the elk.

Other businesses who donated to the trip included St. Charles Bass Pro which donated a shooting tripod, Rusty’s Meat shop in Springerville which processed the meat, and Sprucedale Ranch and Rhode Inn & Suites, which provided lodging in Arizona.

“We could not thank all of these places enough for making this hunt happen for Justice,” Missy said. “Justice was excited to get to mark another wish off of his list of things he would like to do.”

Missy said she was excited for Justice to be able to experience this hunt with his dad and uncle and that it was a huge blessing for him to experience it as well as fill their freezer with meat.

“It was a once-in-a-lifetime trip for him,” Danny said. “We are so grateful he had this chance. We hope to help provide opportunities for other kids to hunt in our area.

“This hunt was such a blessing to our family that we are looking into the possibility of starting a similar ministry locally if the need and resources are available. In order to do this, we would need access to quality land and volunteers to assist during the hunts.”

As the elk meat supply begins to diminish, Justice is already looking toward his next adventure saying he would love to hunt a bear or moose someday.

Vote to select the winners in our 2017 Destinations Photo Contest!