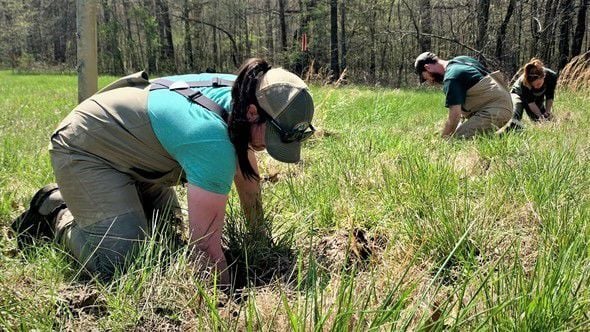 Burrowing crayfish can be discovered by searching for "chimneys" above a small cavity within the ground, then gently excavating that area by hand. 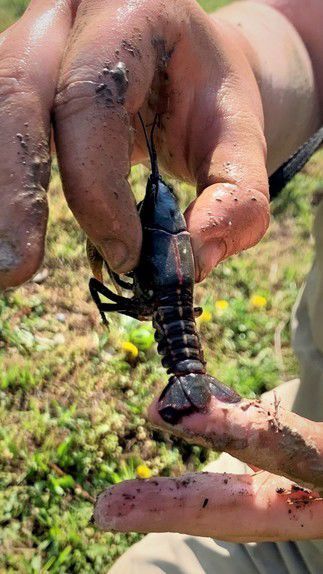 At first glance, most crayfish look pretty much alike, but closer study reveals that the species differ greatly in size, color, and the proportional development of various body parts.

Missouri Department of Conservation (MDC) has partnered with University of Illinois at Urbana-Champaign for a project focused on burrowing crayfish, led by master’s student Caitlin C. Bloomer, Dr. Christopher Taylor, and MDC Scientist Bob DiStefano. Recently, a portion of the project was held at Duck Creek and Otter Slough Conservation Areas in Puxico.

The venture examines primary burrowing crayfish, which are a specific subset of crayfish that create burrows and spend most of their lives in them. They are also quite evasive and difficult to excavate, which is why there is currently a lack of data on them, especially life history data and habitat data, Bloomer said.

“We are trying to see how the crayfish respond to land management practices that MDC use in their conservation areas,” she said. “Specifically, we are interested in mowing, disking, and controlled burns that are widely used to manage native vegetation and waterfowl habitat. We're hoping to also measure other habitat data as we sample so we can get an idea of where else there may be burrowing crayfish populations.”

Crayfish are among the largest and most common invertebrates in Missouri's lakes, streams, and wetlands. They often appear in densities of around 20 animals per square meter of stream surface area. This abundance, which is greater than almost anywhere else in the world, is good news because crayfish possess many traits that make them critical to the proper functioning of our water bodies.

It can also be difficult for nonscientists to identify crayfish species. The only identification aids available in many states are highly technical keys that place heavy emphasis on slight differences in reproductive structures (gonopods) in mature males. Fortunately, Missouri crayfish have more readily observed features that can be used in determining the species. Also, many have definite and quite limited distributions, reducing the number of species from any given area that need to be considered in the identification process.

“We found three species between Duck Creek and Otter Slough Conservation Areas,” Bloomer said. “Creaserinus fodiens (the digger crayfish), Lacunicambarus polychromatus (the painted devil crayfish), and Procambarus viaeviridis (the vernal crayfish). They are all Species of Conservation Concern (SOCCs) in Missouri, so it's good we are finding them!”

At first glance, most crayfish look pretty much alike, but closer study reveals that the species differ greatly in size, color, and the proportional development of various body parts. These differences are in turn related to the diversity of behaviors that crayfish have adopted to find food, reproduce their kind, and avoid being eaten by predators such as fish, birds, and mammals.

Crayfish are also an important food for more than 200 other animals, serving as the main forage for some of Missouri’s most popular sport fish. Aside from contributing to Missouri's ecological function and natural diversity, crayfish serve industry and culture in the form of fish bait and freshwater seafood.

St. Joe State Park in St. Francois County will be teaching classes to those who have an interest in kayaking, but don't have a kayak. In addit…

Summer months bring both the buzz of lawnmowers and bees. These fuzzy flyers are important pollinators, playing a crucial role in the producti…

To commemorate Missouri’s bicentennial, Missouri State Parks invites avid cyclists to participate in a century ride on the Katy Trail on Satur…

Burrowing crayfish can be discovered by searching for "chimneys" above a small cavity within the ground, then gently excavating that area by hand.

At first glance, most crayfish look pretty much alike, but closer study reveals that the species differ greatly in size, color, and the proportional development of various body parts.