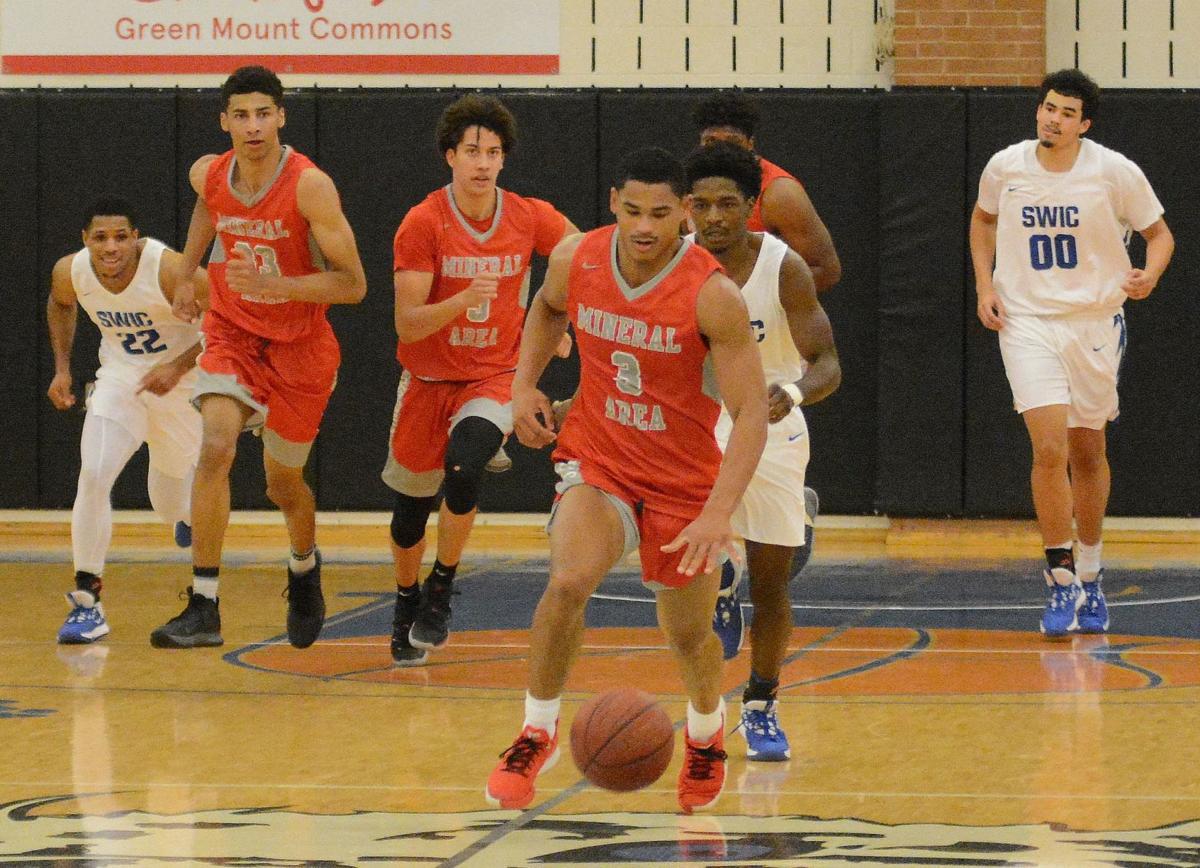 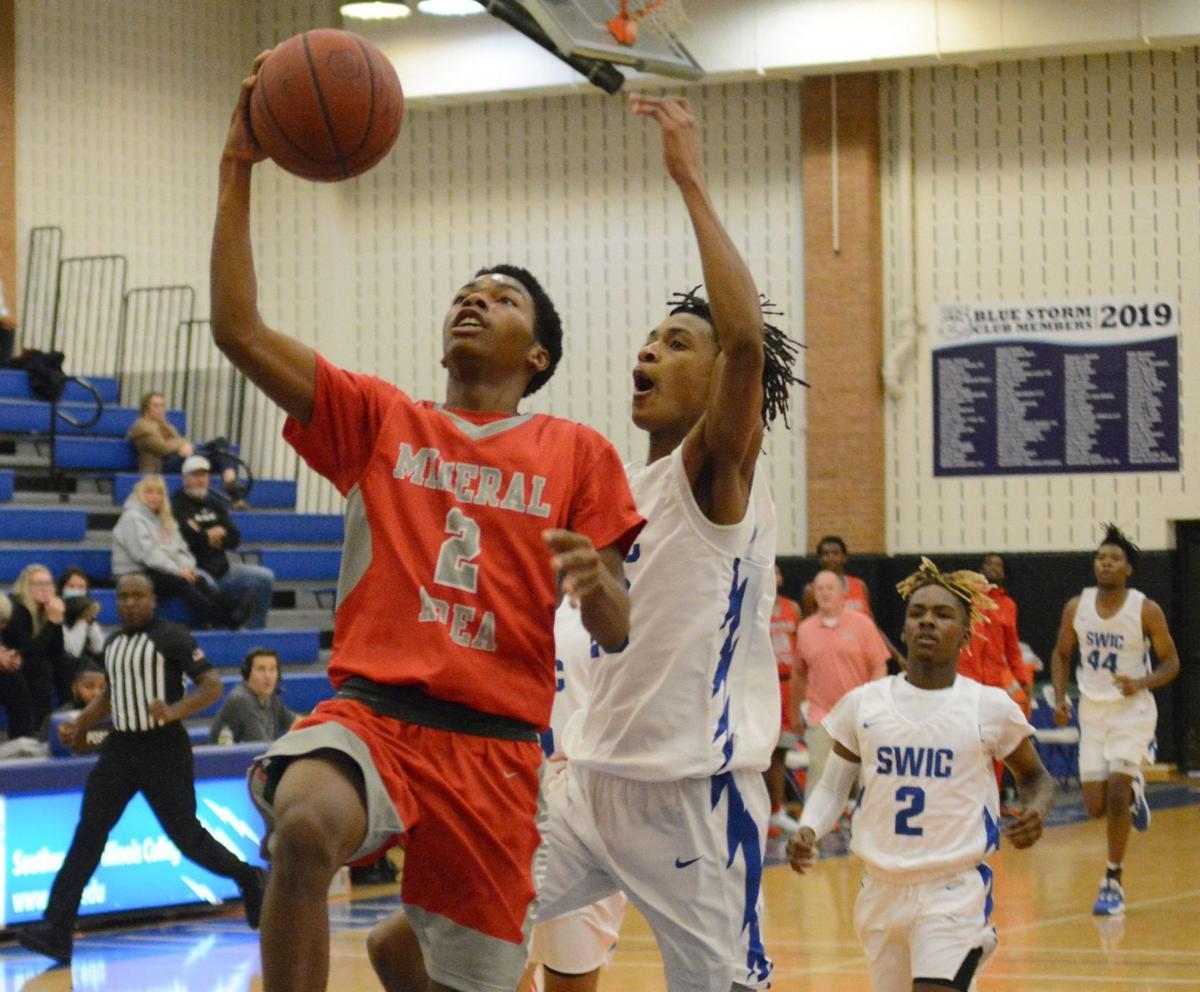 Mineral Area freshman guard Terrion Murdix (2) scores a layup while being fouled from behind by SW Illinois guard Juanya Frank during first half action on Tuesday night in Belleville, Ill. 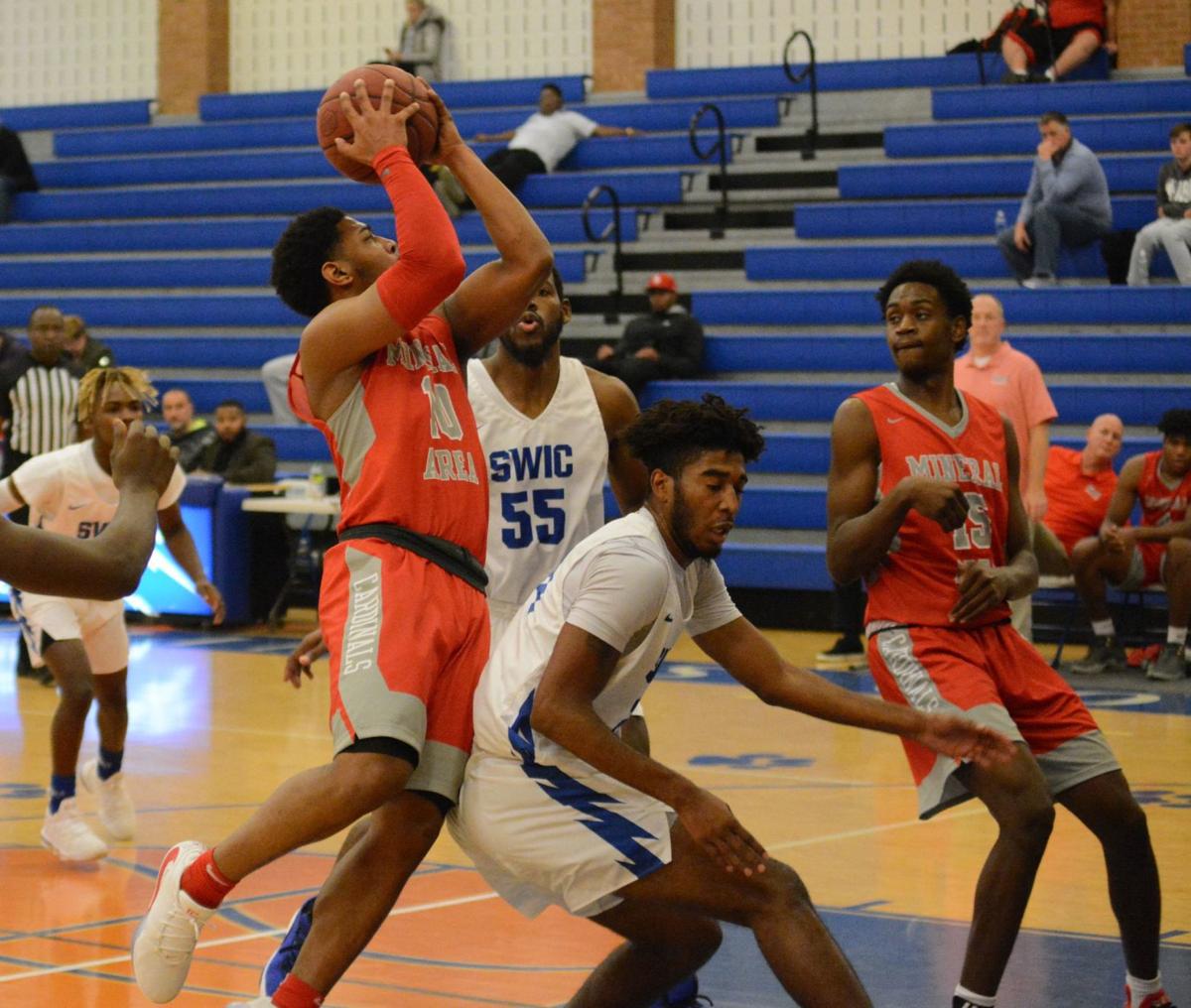 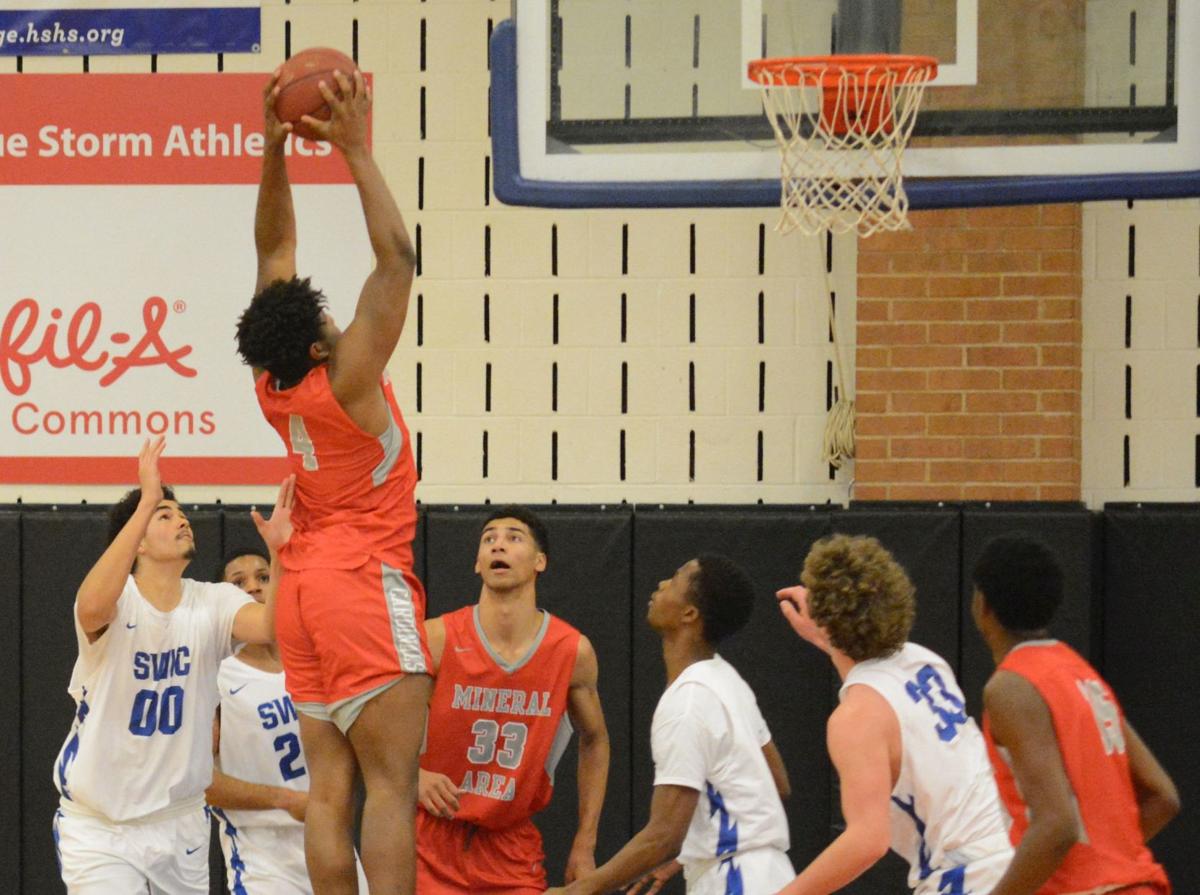 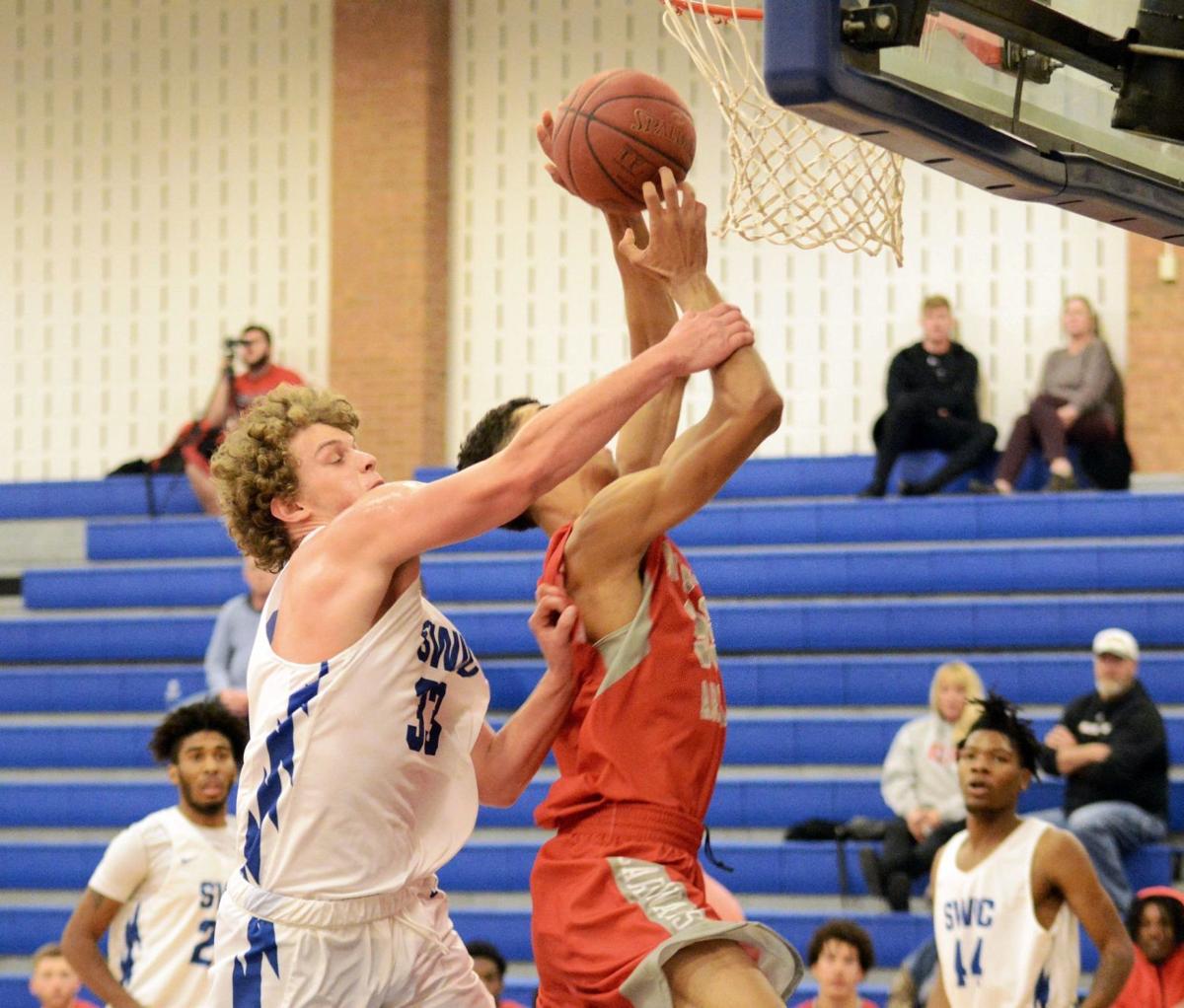 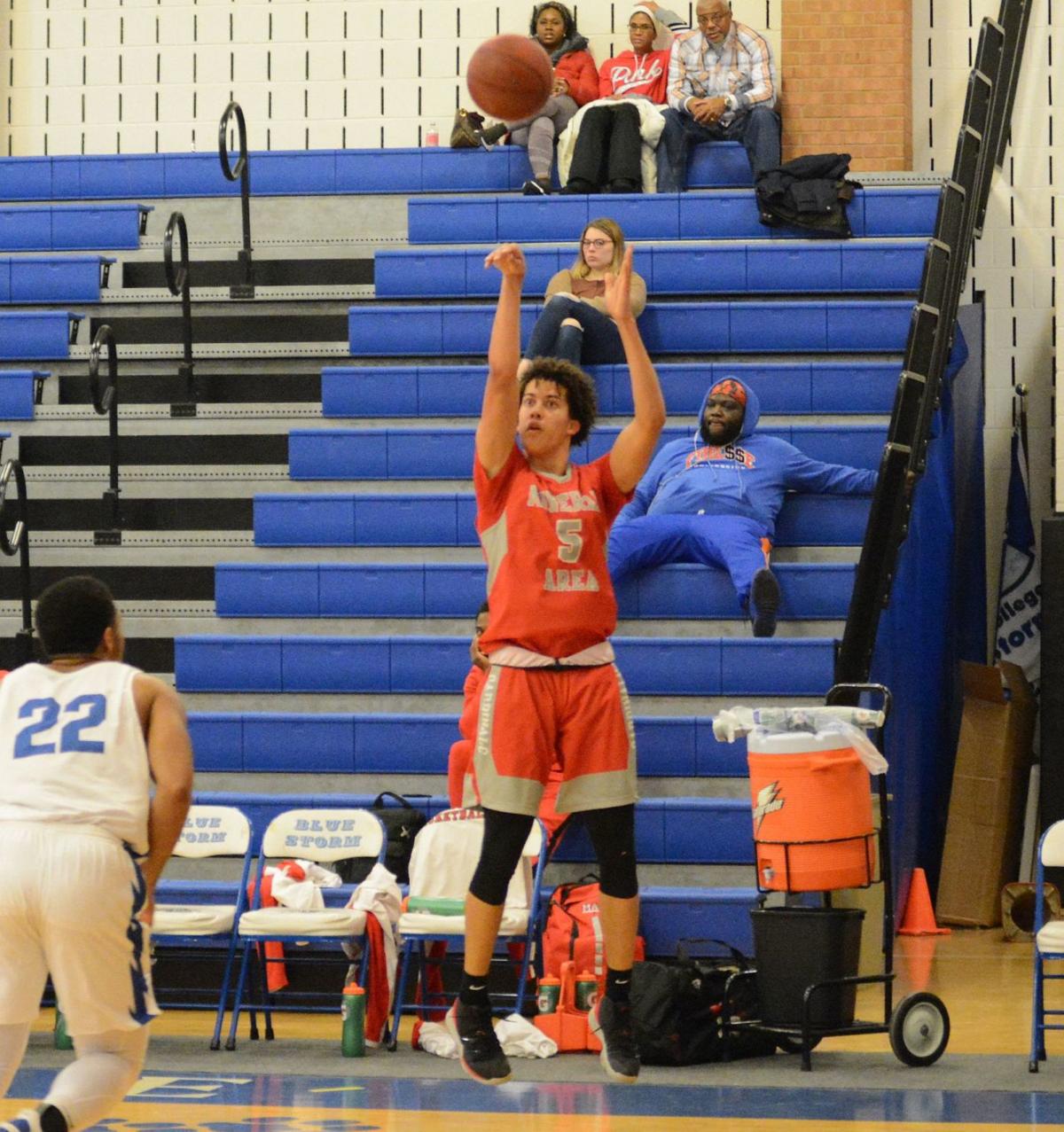 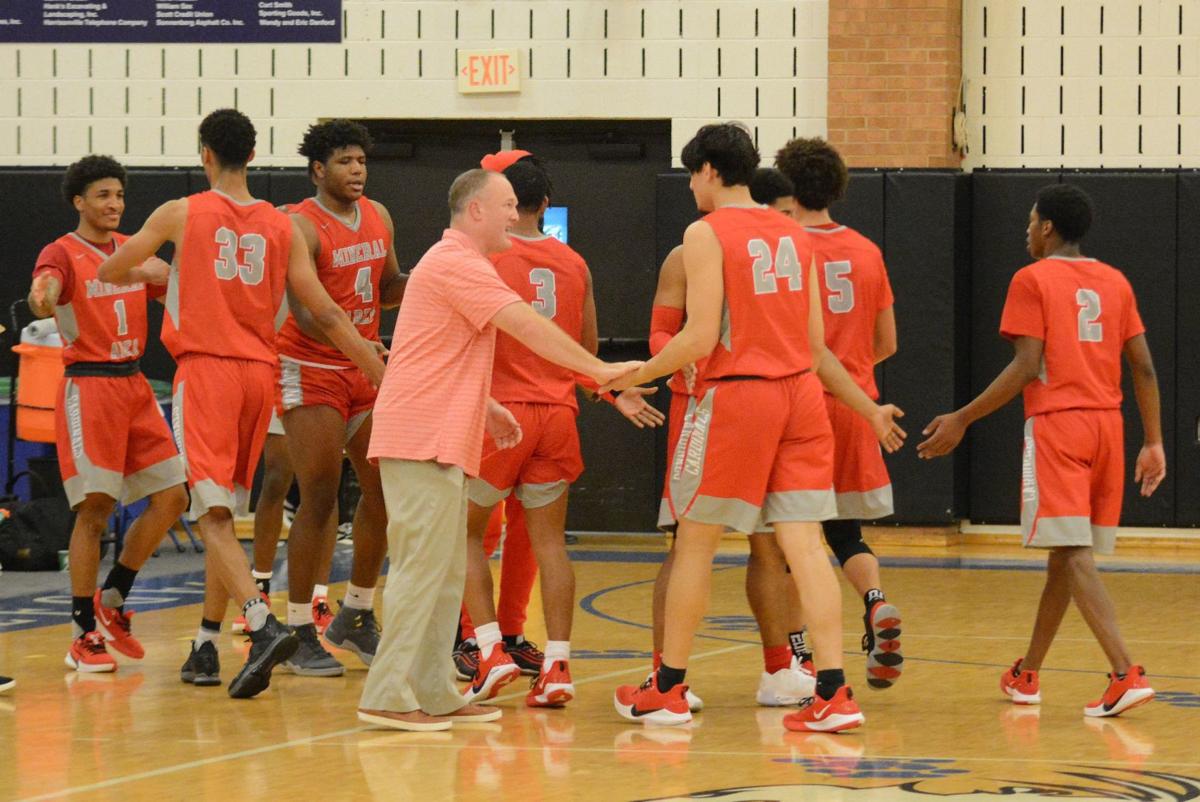 Mineral Area head coach Luke Strege greets his players near the bench at the conclusion of the first half after building a 24-point lead against SW Illinois on Tuesday night.

BELLEVILLE, Ill. – Although the Mineral Area men’s basketball team has averaged nearly 25 victories per season since the arrival of fifth-year head coach Luke Strege, road trips to SW Illinois have rarely turned out the way he hoped.

The current roster of Cardinals appeared rather comfortable facing that challenge on Tuesday night, and never trailed in a quick rematch from six days earlier.

Freshman guard Keyyaun Batchman scored 21 points on 8-of-13 from the field to lead five players in double figures, and Mineral Area shot 53 percent overall in a 93-75 victory.

Relying on more zone defense than planned, the Cardinals (5-0) used their hustle and spacing to disrupt passing lanes and regularly create points off turnovers.

Terrion Murdix totaled 19 points with three steals, and netted an uncontested layup a few seconds after finding Batchman ahead for a fast-break basket.

Mineral Area made six of its first eight shots – including consecutive 3-pointers by Batchman and center Gabe O’Neal – and built a 16-9 lead that expanded before halftime.

SW Illinois committed turnovers on three straight possessions, and yielded a 12-0 run to the visitors. A Batchman 3-pointer on a driving kickout pass from Kevin Legardy made it 32-15.

“I told the guys before the game that I can’t win in this gym, so they were going to have to,” Strege said. “Maybe they got it done because we started four freshmen who had no idea what they were walking into. They weren’t scared and got off to a great first half.”

Legardy notched seven assists and grabbed seven rebounds for the Cardinals, who surged ahead 53-29 when he dished to Malevy Leons for a dunk just before the halftime buzzer sounded.

Mineral Area cashed in by hitting 25-of-32 free throws. Leons was 6-of-6 at the line, and Murdix sank each of his five attempts.

The Cardinals moved the ball crisply through the post on several half-court sets. O’Neal ended with 14 points and nine rebounds, while Leons produced 14 points, eight rebounds and four blocked shots.

Leons rejected an attempted runner and promptly sprinted to the opposite end for a transition putback during the first half. Legardy later made a steal and outlet assist to Murdix for a 3-point play.

“We were actually trying to do the opposite and slow the game down, but they continued to play fast even though we were in that zone,” Strege said. “That led to some missed shots which helped us get out in transition."

SW Illinois was paced by a double-double from forward Lamarius Lillard, who scored 17 of his 21 points after intermission while securing 10 rebounds.

Charles Jones fed Lillard for a slam, and Patrick Evans rolled down a floater in the lane as the Blue Storm mounted an 11-4 spurt to begin the second half.

Mineral Area saw its cushion reduced to 59-44, but increased the pressure from there and earned its next four field goals in transition.

Murdix sparked that push by gashing the defense on the attack, then assisted when Angelo Stuart scored while being knocked down for a 3-point play.

“We just had to settle guys down and make them aware what was going on,” Strege said. “We have so many freshmen, and it’s hard sometimes to be ahead that much by halftime against a good team and not take your foot off the gas a little bit.”

Batchman zipped an extra pass to Kevin Stone for an open 3-pointer in the left corner, restoring a healthy and safe 80-52 advantage with less than six minutes remaining.

Juanya Frank had 13 points after connecting three times from long range down the stretch, and Evans chipped in 10 as the Blue Storm put 11 men in the scoring column.

The Cardinals utilized a rotation of nine as Ja’Quaye James did not play. Their next three contests will take place at Sechrest Fieldhouse, beginning on Friday night against Kennedy-King.

Mineral Area freshman guard Terrion Murdix (2) scores a layup while being fouled from behind by SW Illinois guard Juanya Frank during first half action on Tuesday night in Belleville, Ill.

Mineral Area head coach Luke Strege greets his players near the bench at the conclusion of the first half after building a 24-point lead against SW Illinois on Tuesday night.