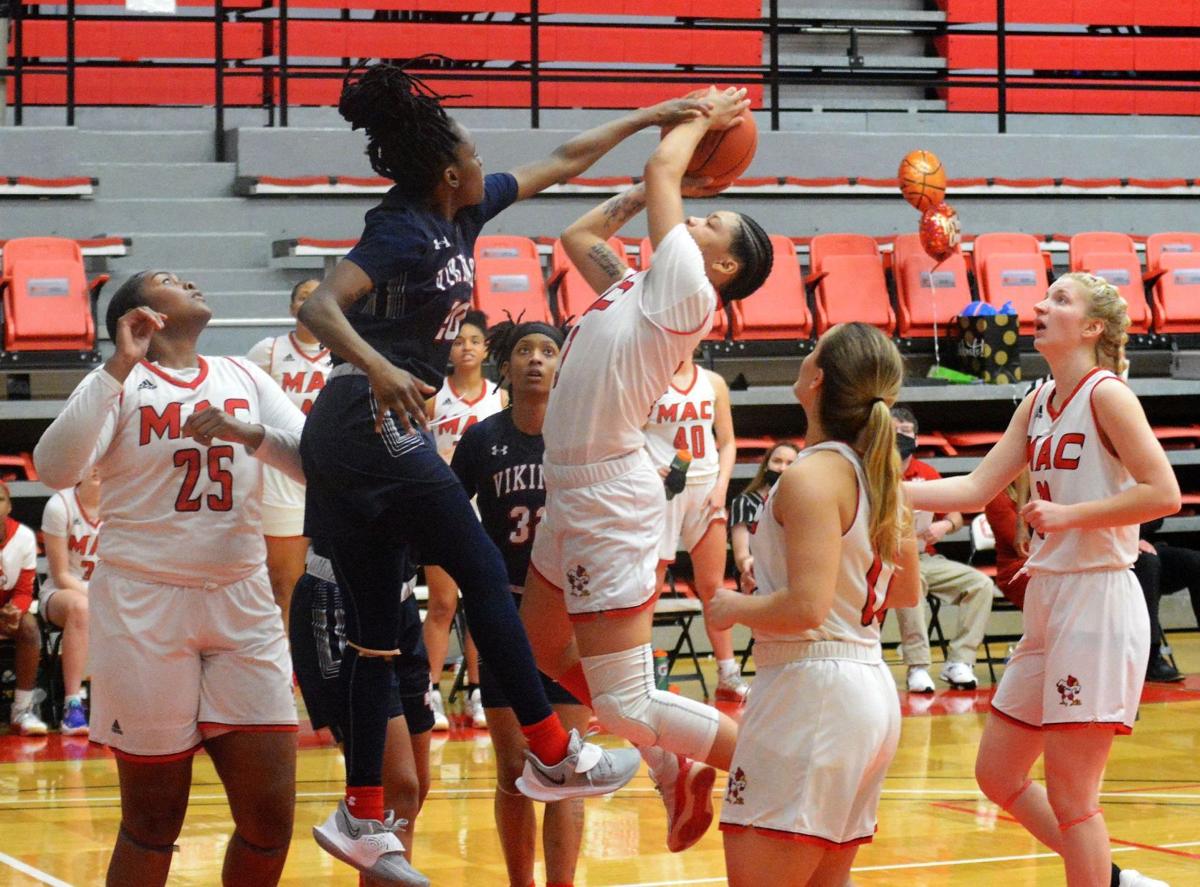 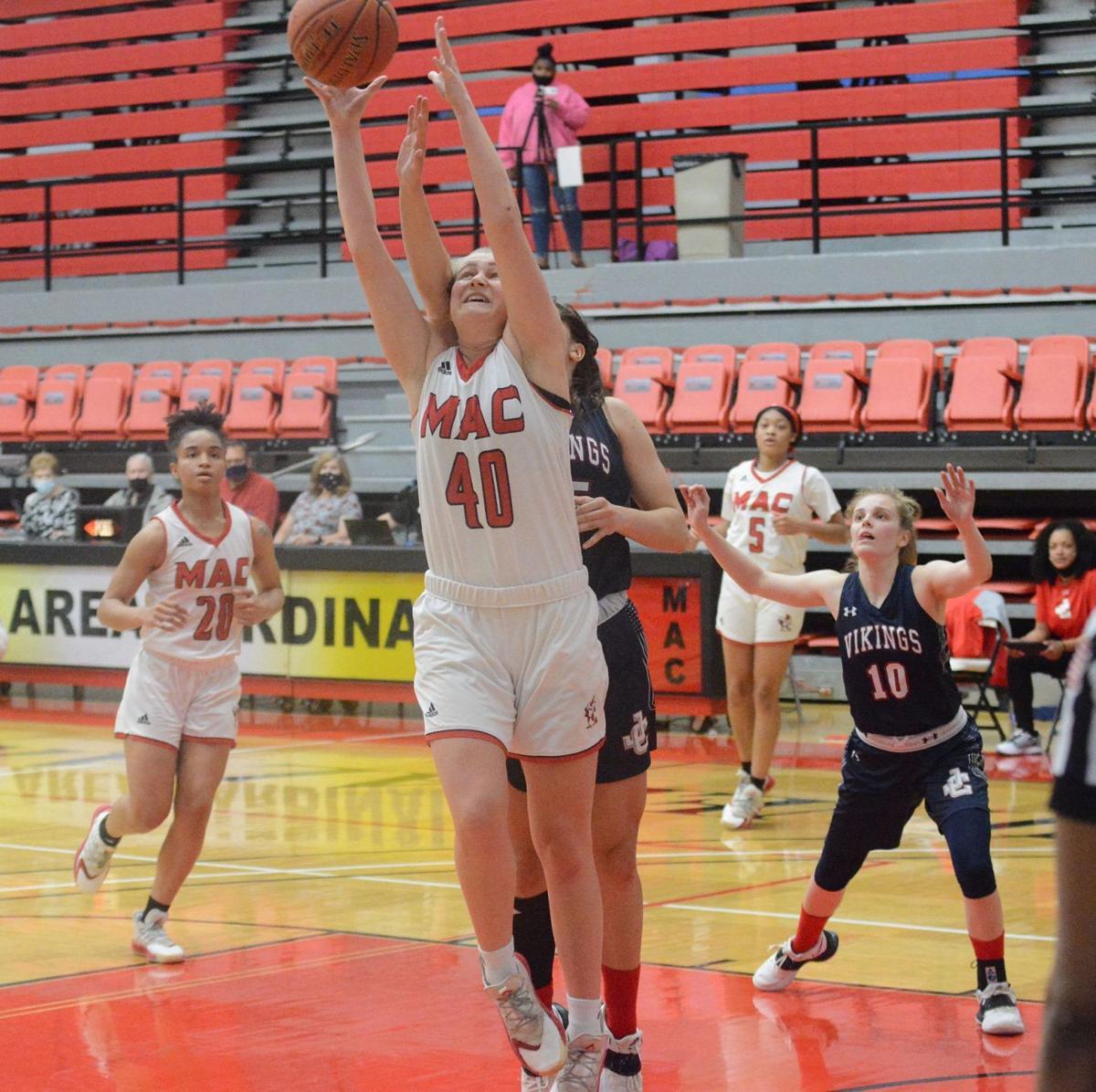 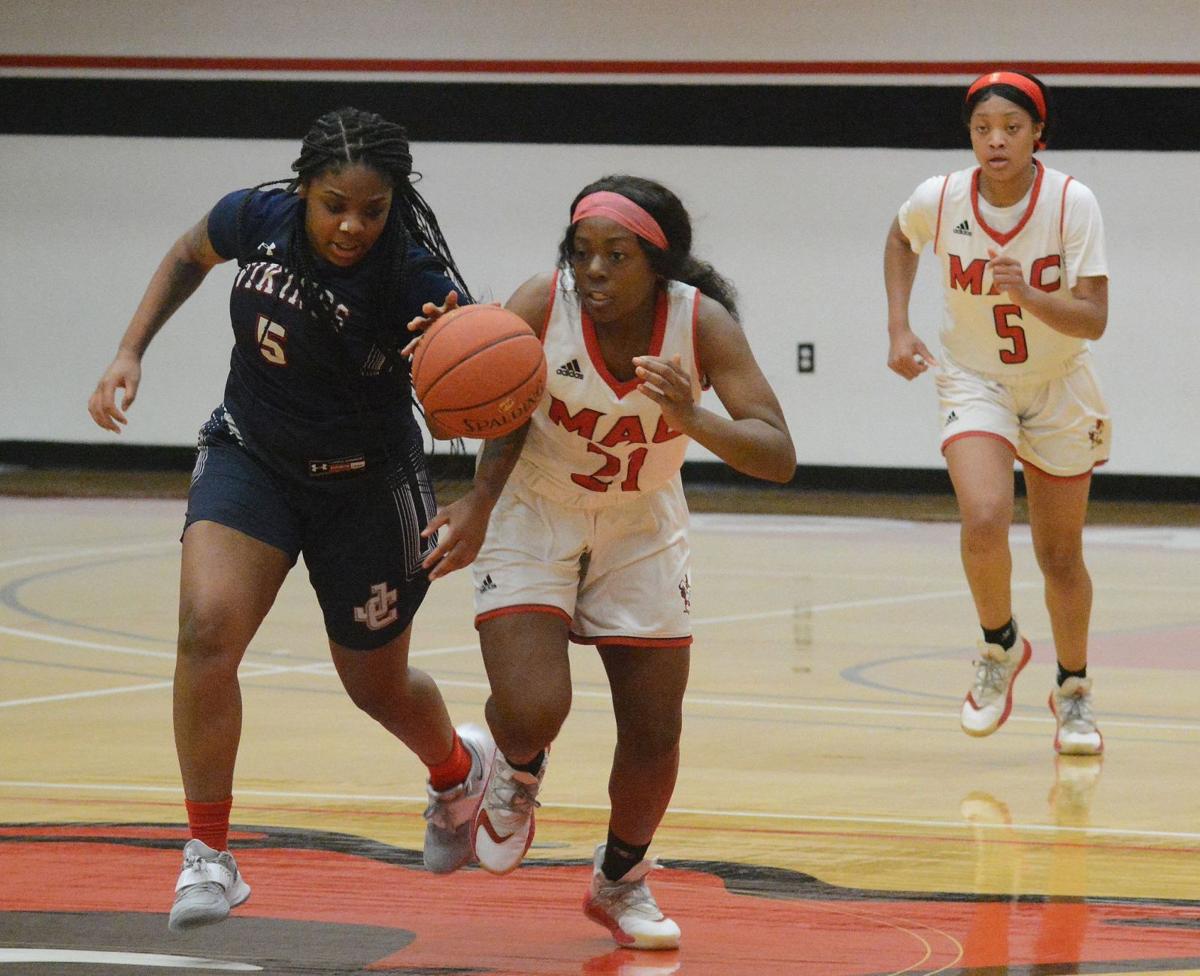 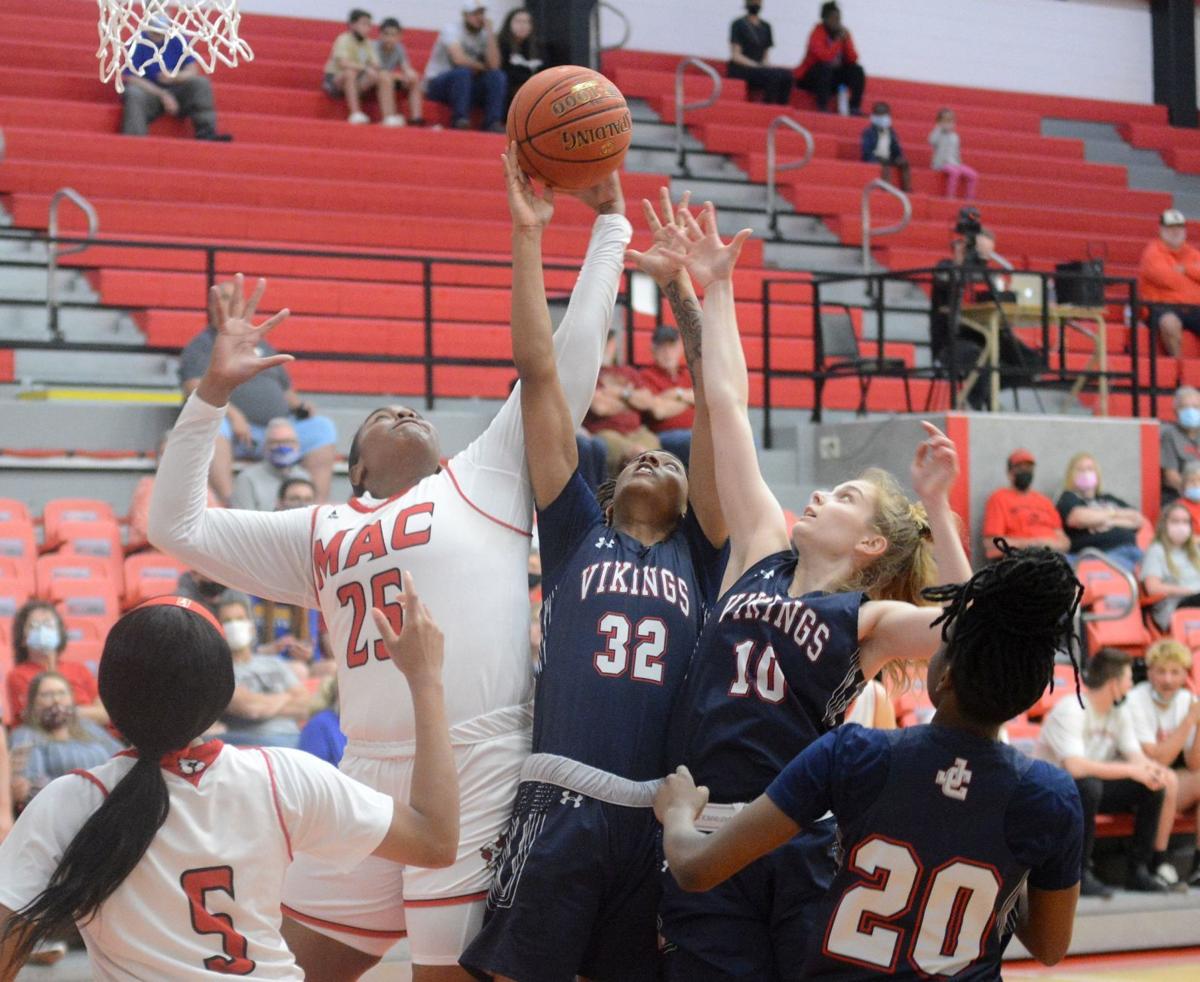 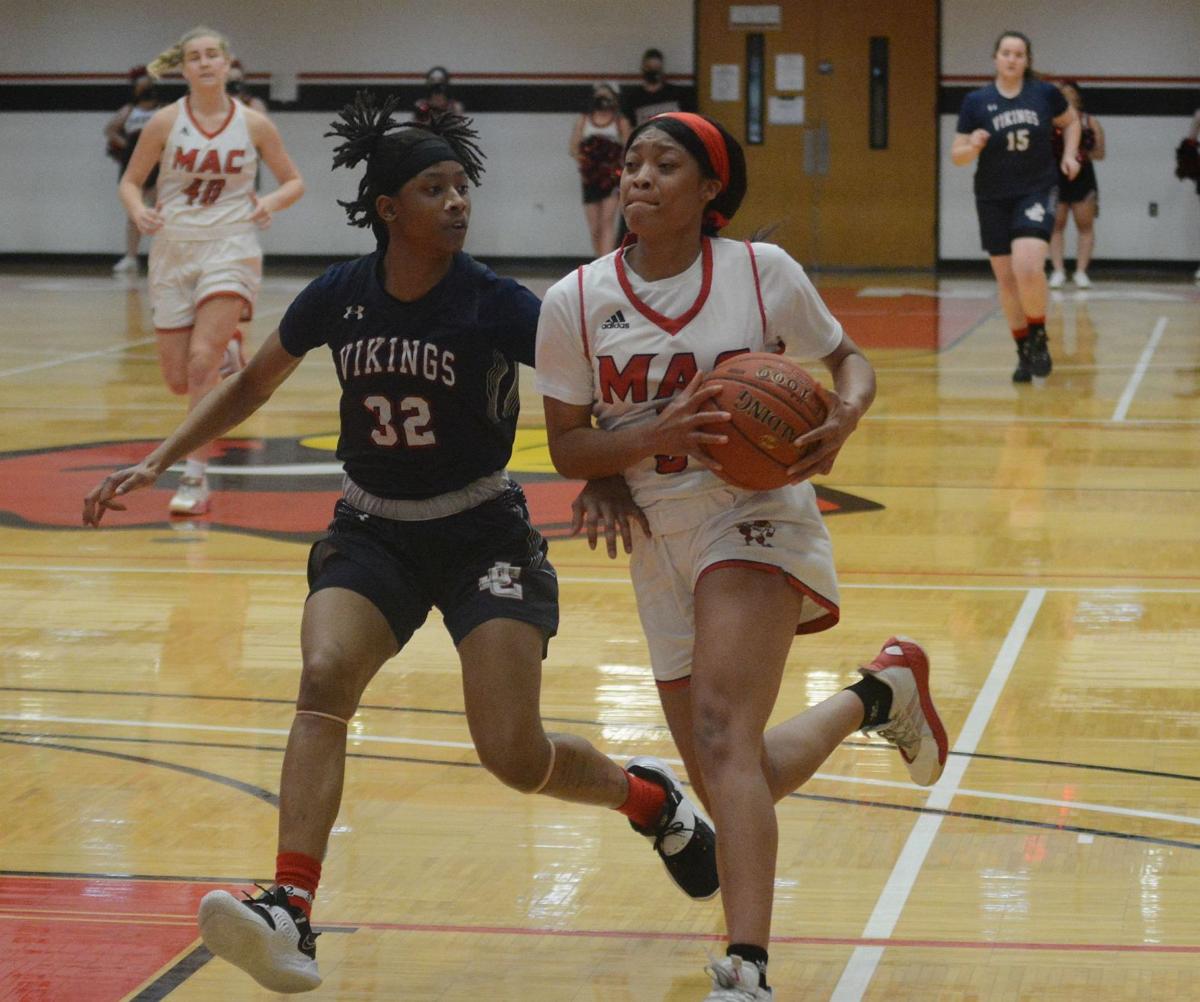 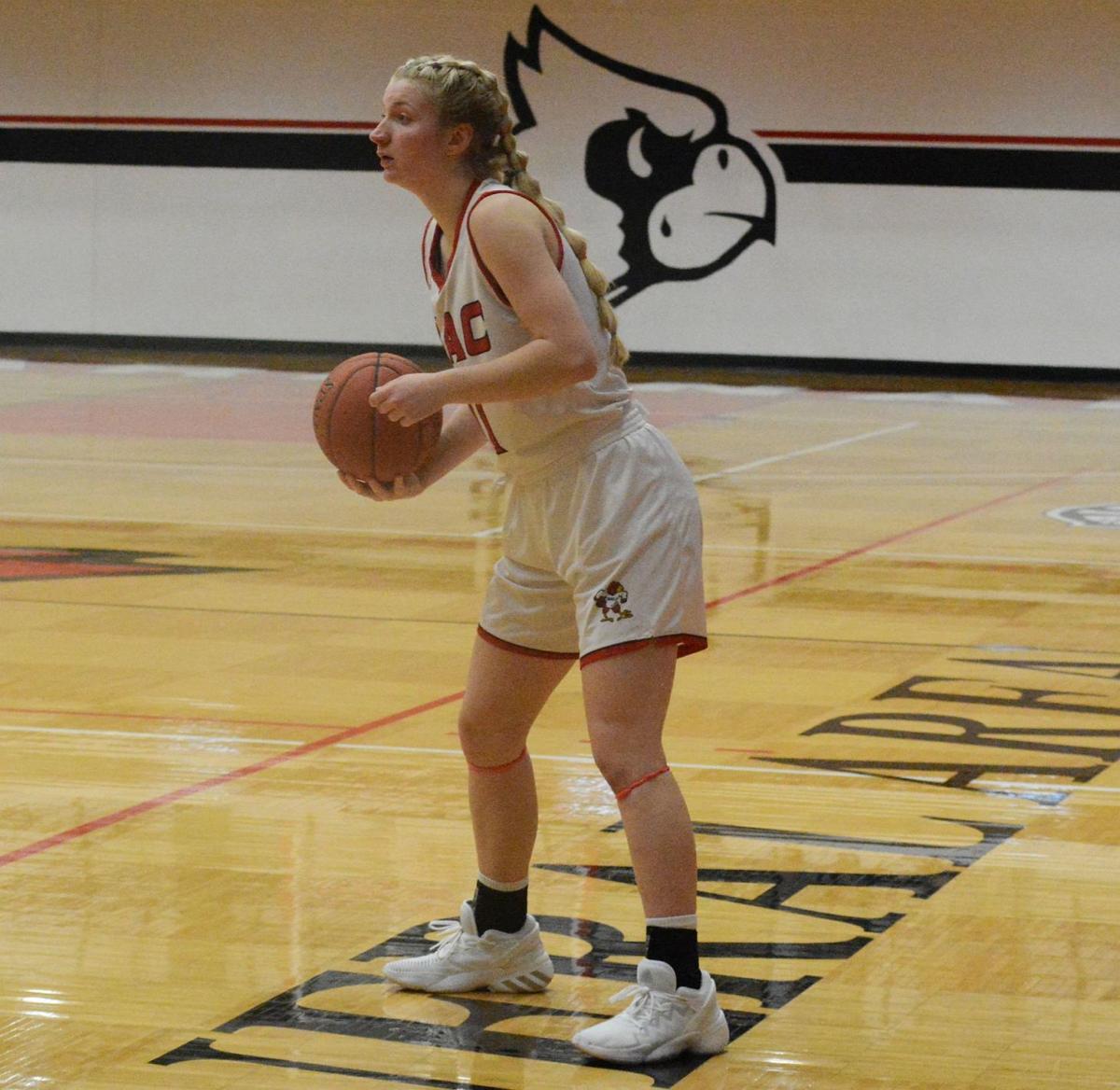 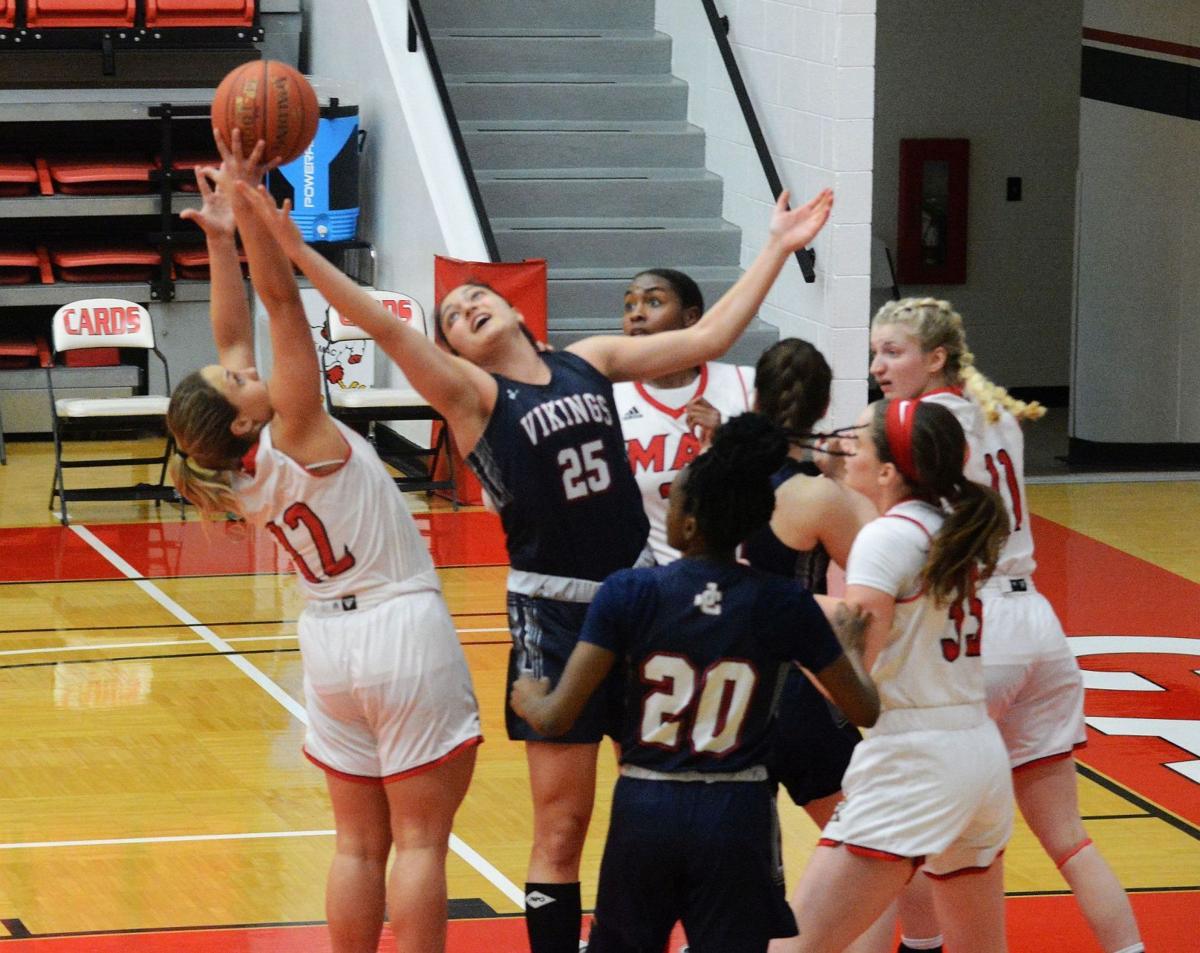 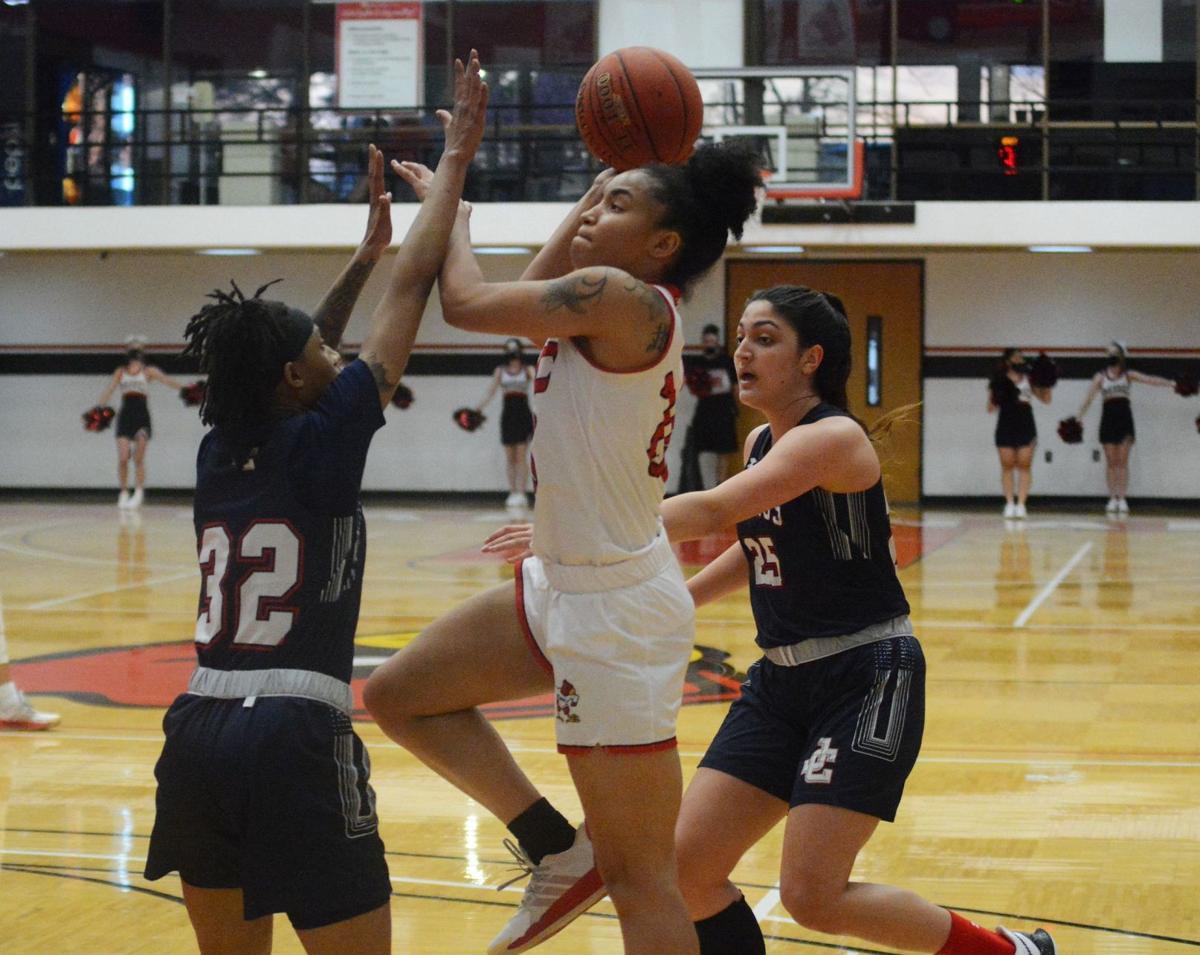 Mineral Area sophomore Olivia Jecty-Brown scores with a runner between two Jefferson defenders in the second quarter of a Region 16 women's basketball first-round game on Tuesday night in Park Hills. 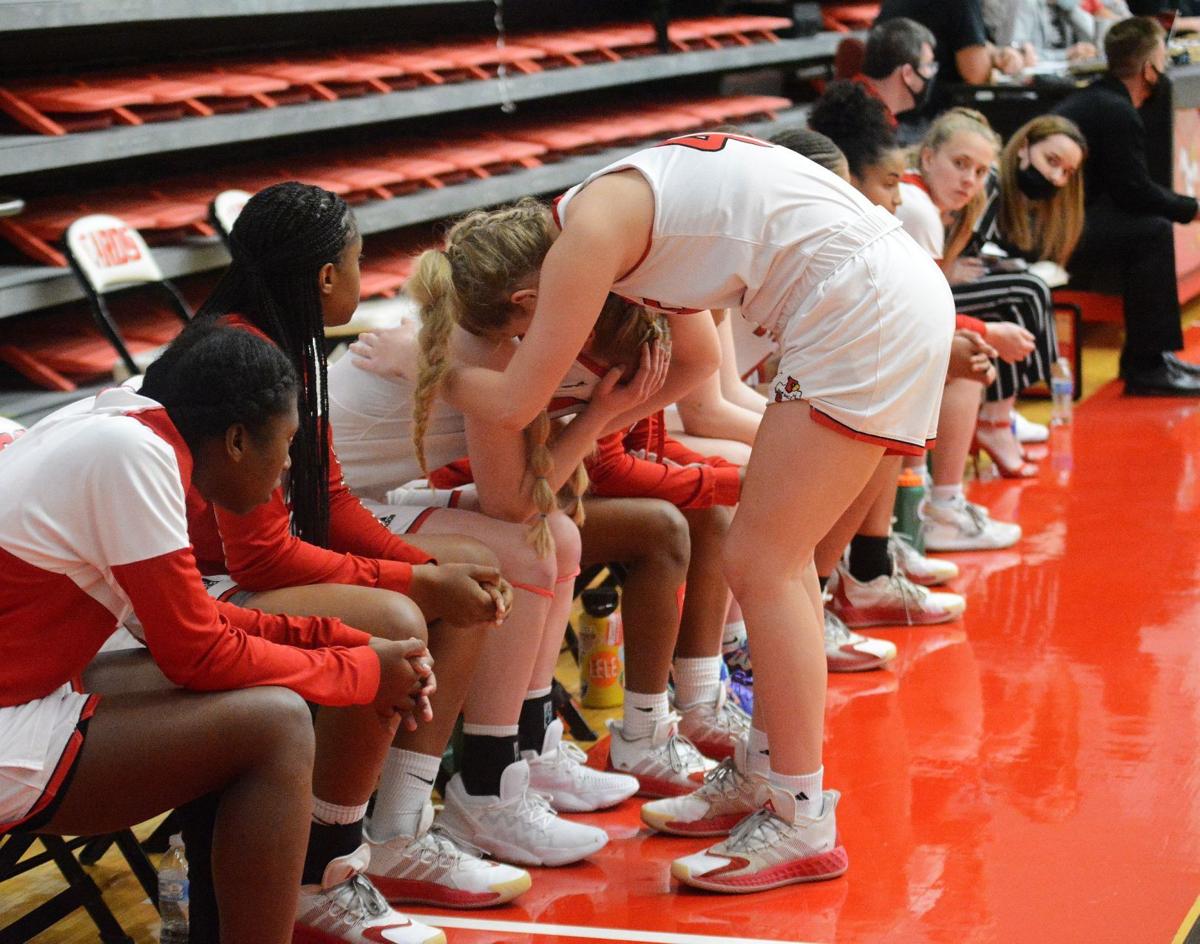 Mineral Area freshman Quincy Erickson is consoled by teammate Kayleigh Winch after fouling out in the closing seconds of a 69-65 loss to Jefferson in a Region 16 women's basketball first-round game on Tuesday night in Park Hills.

With two main contributors ruled out for the first round of the Region 16 tournament on Tuesday night, her Cardinals could not generate enough spurts of energy to continue onward.

Mineral Area (9-13) shook off a lethargic opening sequence that included four straight turnovers and saw the visitors gash its defense for a 9-0 run.

But subpar free-throw shooting, 19 total turnovers and faulty decision making haunted the Cardinals, who did not have second-leading scorer Jayla Sample and Ashanti Davis in uniform for undisclosed reasons.

Tomas sandwiched consecutive baskets on assists from Katerina Patkova around two missed layups at the other end, and Jefferson established a 62-53 lead with less than four minutes remaining.

Mineral Area trailed by eight with 1:54 left, but mounted a steady push before falling short. Erickson hit a 3-pointer in the left corner for her final field goal of a strong freshman campaign.

Defense enhanced the desperate comeback attempt. Multi-sport athlete Emily Kellum, used sparingly as a basketball walk-on, came up with a timely steal inside the final minute.

Michaela Ayers capitalized with another corner triple to make it 65-63, and the Cardinals earned an unlikely chance to tie or take the lead when a backcourt trap induced a traveling violation.

Point guard Yasmine Pankey did not force the pass as Erickson made a backdoor baseline cut, and the Vikings would strip the ball later in the possession as Erickson tried to create on a congested drive.

Malone drained two clutch free throws, and Patkova sealed the outcome with another pair after Stewart sank a 16-footer for MAC with 2.7 seconds on the clock.

Jefferson finished 16-of-23 from the line compared to 17-of-30 by Mineral Area, which never won more than two consecutive games this season.

Palmer will enter the offseason facing several personnel decisions. A squad that shot just 38 percent from the field over the season is primed to receive a needed boost once signed local high school standouts Gracee Smith of Arcadia Valley and Dori McRaven of West County arrive on campus.

“This year has been nothing but learning for me, and I’m proud to represent Mineral Area,” Palmer said in a radio interview. “I’m excited for our future. It’s been ups and down and highs and lows. It won’t define me or this program. It will make us better.”

The Cardinals regrouped from a timeout with a 14-4 counter. Moore was fouled on a driving bank shot, and Stewart powered her way to the basket for another 3-point play.

Pankey finished with eight assists, and made a steal that Moore followed in transition for the first MAC lead of the contest at 14-13.

Jefferson never fell into a sustained offensive lull, however, and restored a 22-15 advantage as a Malone fast-break layup capped a 7-0 run before the first quarter concluded.

Vikings coach Ashley McGee picked up a technical after 11 of the first 13 fouls were called against her crew, which stayed focused after a forced bank shot by Olivia Jecty-Brown drew the Cardinals within 26-24.

Tomas drove past Stewart for a 3-point play at 33-27, and the visitors headed into halftime with a 34-32 edge after Moore drove end to end for a basket.

Erickson cut the Jefferson lead to 43-42 on a putback, then regained the lead for Mineral Area 47-45 on an effective drive down the left baseline.

Brooke Smith made an excellent block at the defensive end, but threw a bad lead pass out of bounds with a chance to hold for the final shot after Kayleigh Winch dropped in a tying putback.

Jefferson instead burned the Cardinals on a 3-pointer by Hunter with time winding down, and Patkova opened the fourth with another connection from long range for a 55-49 lead.

Which men's college basketball programs should we keep an eye out for next season?

Which men's college basketball programs should we keep an eye out for next season?

NEOSHO, Mo. – The Mineral Area women capped the basketball regular season with perhaps their most satisfying road victory on Saturday.

Mineral Area sophomore Olivia Jecty-Brown scores with a runner between two Jefferson defenders in the second quarter of a Region 16 women's basketball first-round game on Tuesday night in Park Hills.

Mineral Area freshman Quincy Erickson is consoled by teammate Kayleigh Winch after fouling out in the closing seconds of a 69-65 loss to Jefferson in a Region 16 women's basketball first-round game on Tuesday night in Park Hills.