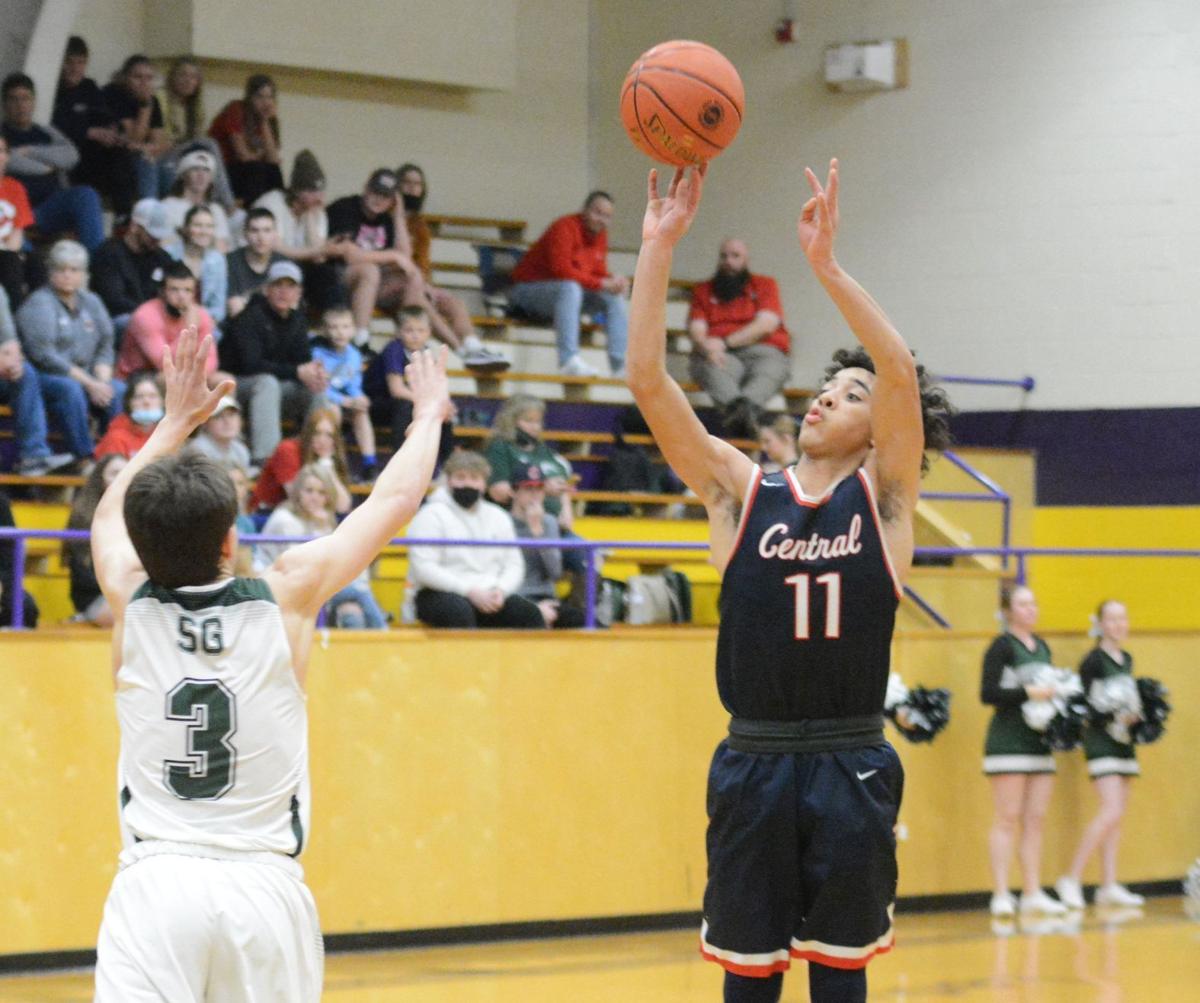 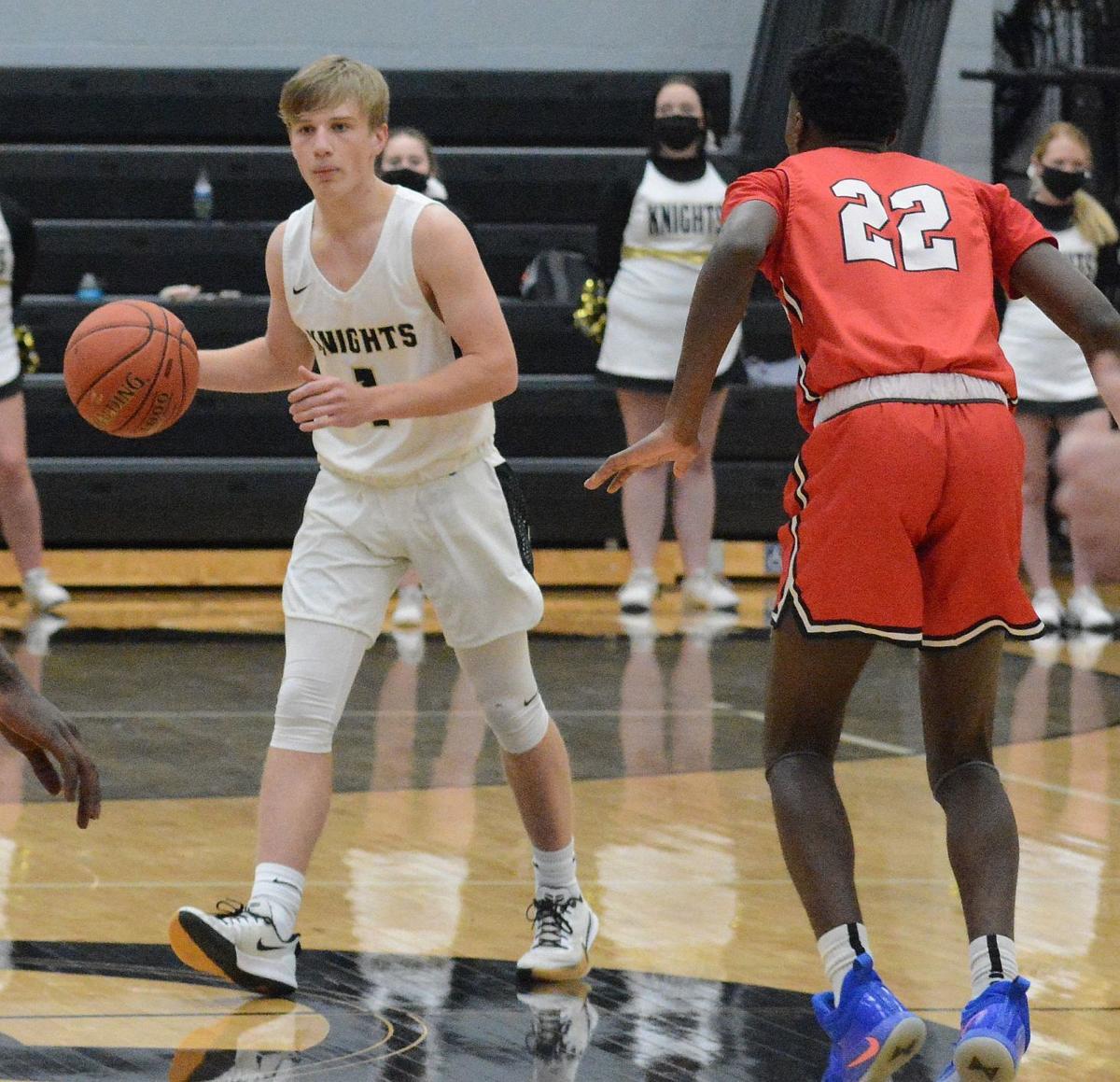 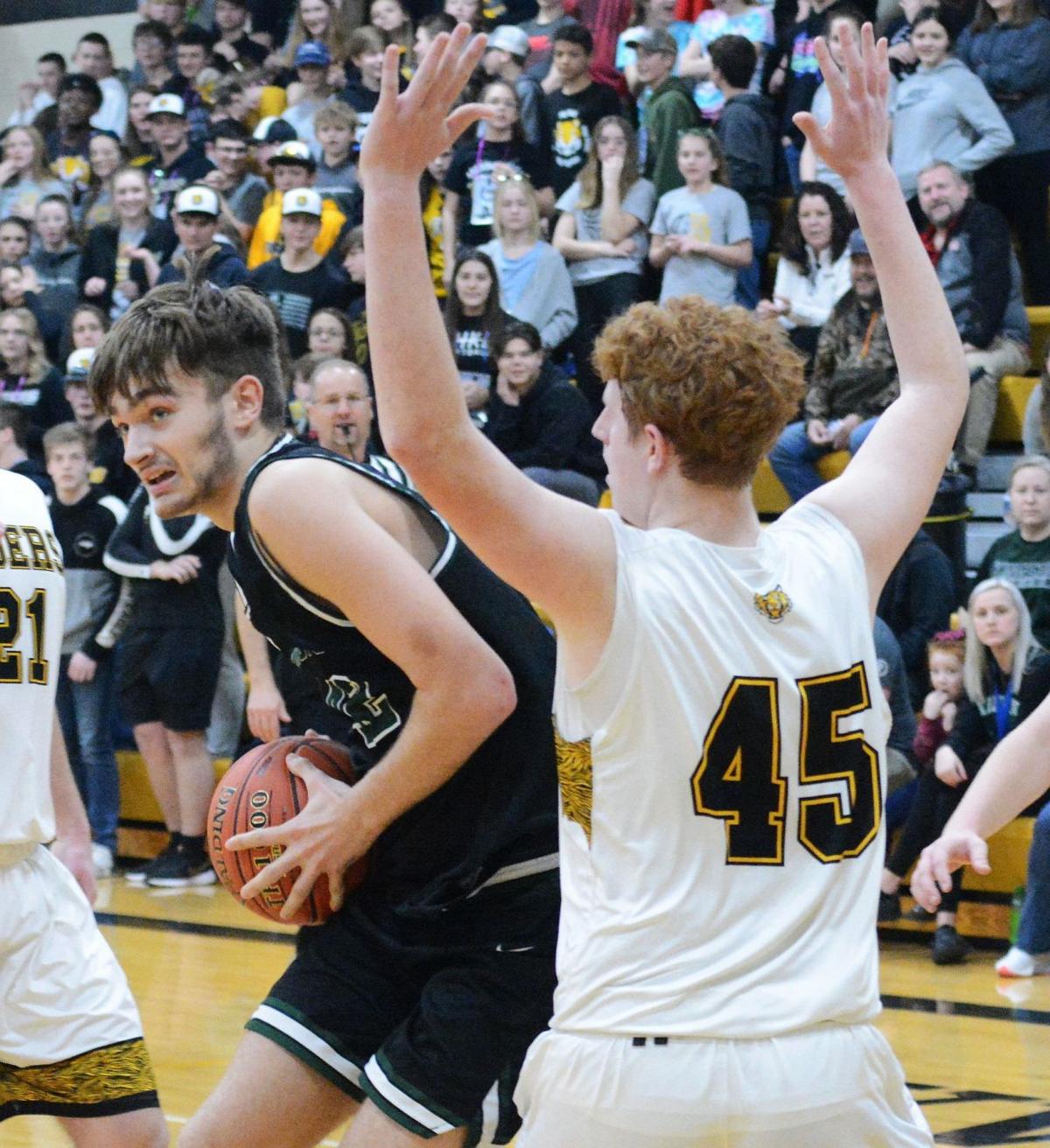 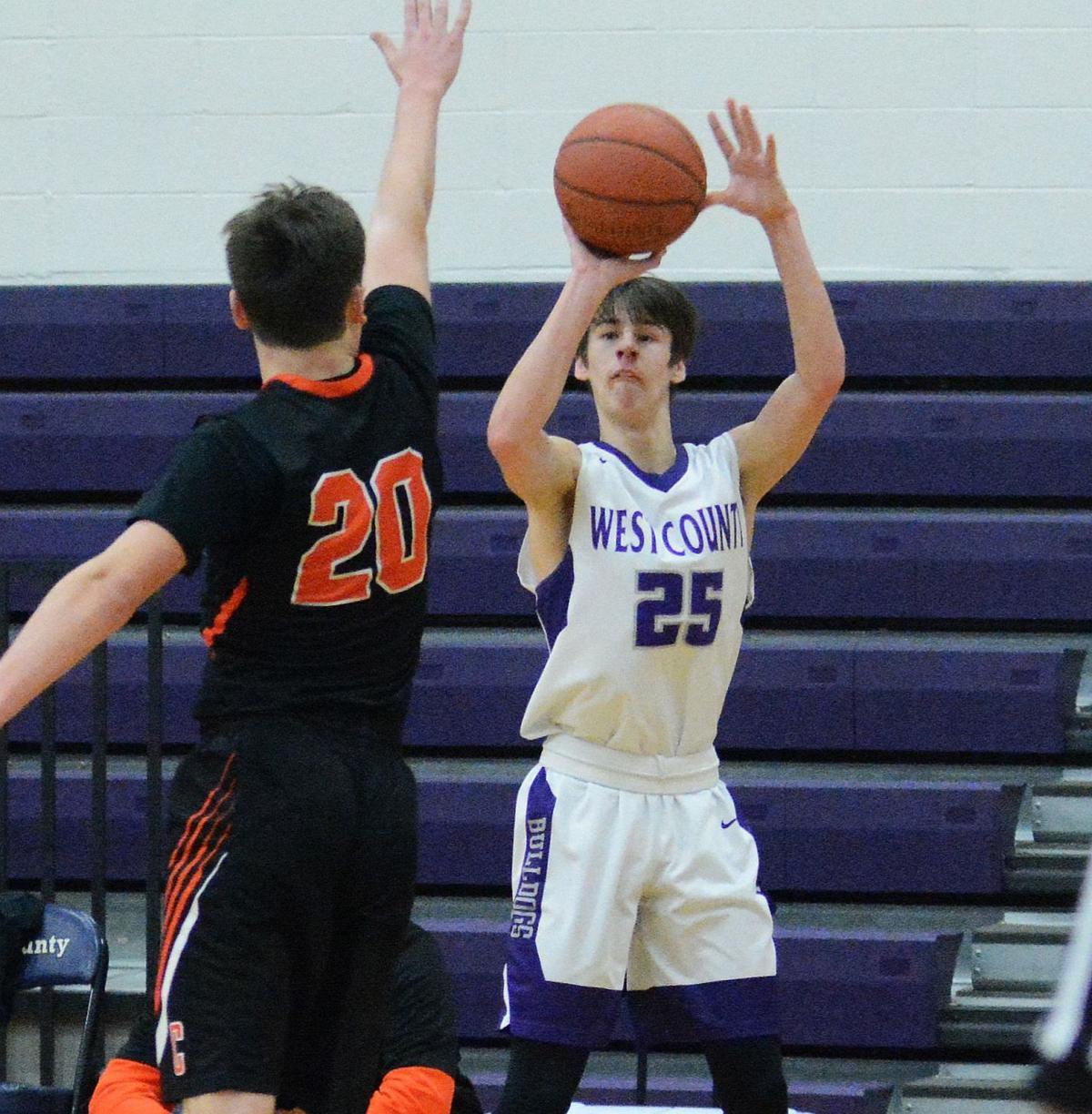 A combination of graduation, offseason injuries and outgoing transfers could result in a serious power shift among boys basketball teams in the MAAA Large-School division this winter.

North County parted with its two top offensive players, and Valle Catholic bid farewell to its career scoring leader after both schools won conference and district titles before reaching the state quarterfinals.

Central and Ste. Genevieve battled for a spot in the state playoffs, and figure to challenge for the league title this time around as Farmington regroups from losing its three starting forwards.

West County and Kingston have the most returning experience among the Small-School rosters, and Arcadia Valley seeks to rebuild quickly after giving the MAAA a fourth district title in 2020-21.

Eight of the 20 all-conference players from last season are back, including five First Team performers.

Central was only a few plays away from perhaps finishing much higher in the conference standings, but put everything together when necessary to earn a district championship against rival Ste. Genevieve.

And with the best player in the MAAA returning to lead the charge, the Rebels should capitalize on a collective year of experience to become the early league frontrunners.

Jobe Bryant amassed more than 500 points as an all-state freshman, and his fast first step from the perimeter forces constant concern from multiple opposing defenders.

The Rebels suffered an unfortunate setback when all-conference guard Mason Williams tore an ACL just a few weeks ago, but help will arrive from an excellent junior varsity squad.

Ste. Genevieve has maintained an admirable level of stability with head coach Rob Coleman at the helm over the past 15 seasons.

The Dragons have repeatedly floated within that second tier of solid MAAA programs, and may have the personnel to finally reach the top of the Large-School division.

A season-opening tournament title in Sullivan showed the potential possessed by Ste. Genevieve, which also won the regular-season clash at Central before the Rebels got even in the district rematch.

All-MAAA forward Aiden Boyer provides an athletic post with enough range to hit shots from the deep baseline and wings. Rudy Flieg represents the gritty aspect of the Dragons with physical play inside.

Former standout guard Garrett Callahan has been promoted to take over a Farmington program that bares minimal resemblance to last year’s mix of size versatility at five positions.

The returning guard tandem of Bracey Blanton and J.P. Ruble may only be matched in the conference by Central regarding the entire package of shooting, slashing, defending and passing.

But opponents no longer have to deal with a pair of athletic 6-foot-7 threats inside. Isaiah Robinson has transferred to DeSmet while Jonah Burgess and all-conference forward Jacob Jarvis have graduated.

Once Karter Kekec recovered from a leg injury and was joined Kyle Conkright as an explosive guard tandem last January, North County was steadily on course to achieve school history.

The Raiders were loaded with senior talent, and secured their first district crown since 1995 before topping Sikeston for their first-ever state playoff victory.

The shelf isn’t completely bare for head coach Jimmy Palmer, but his style of relentless full-court pressure defense will naturally fall into the hands of some less experienced players.

Andrew Civey figures more prominently into the mix near the basket, and fellow returning junior Kooper Kekec serves as an effective pest defensively for opposing guards.

Valle Catholic surged all the way to the Class 2 quarterfinal round, and gave Campbell a tough battle at home before ultimately being eliminated by the eventual state champions.

The Warriors will reset following the graduation of all-time scoring leader Carter Hoog, but have a strong core of players back to defend their MAAA Small-School conference and district titles.

Junior and three-year starter Chase Fallert runs the show from the point, and future Missouri baseball player Aiden Heberlie causes an athletic headache and rebounding force in the paint.

Talented guard and outside defender Sam Drury suffered a serious injury in September that wiped out the remainder of his football season.

Fredericktown is 10 years removed from the last winning season, but some important pieces are in place for a potential upward trend.

The Blackcats finished a disappointing conference schedule winless last winter, but returns four starters and most of its scoring production.

Junior guard Andrew Starkey is again the most dangerous weapon with varsity experience, and should have plenty of help inside from brother Matthew Starkey and athletic senior Cohlbe Dunnahoo.

Senior guard Lane Sikes is also back for a team that enters next week’s Arcadia Valley Thanksgiving Tournament as the No. 3 seed and needs to quickly develop depth off the bench.

West County lost a few seniors to graduation, but plenty of optimism remains with a large majority of its offensive leaders ready to lead a hopeful resurgence.

The challenge for the Bulldogs will be maintaining discipline and intensity for the full 32 minutes. They showed signs of excellence while building a big lead over Ste. Genevieve last before fading at home December.

Garrisson Turner paced the scoring several times as a freshman with impressive shooting range. Mason Simily and Matthew Menzel can hit from the perimeter and power their way inside.

Michael Simily and Jase Campbell will be especially responsible for physical play and rebounding from the low post, and Caden Merrill amplifies his size with a solid jump shot.

A nearly even record reflected the inconsistency that exemplified last season for Potosi, despite sending out five seniors amid certain lineup combinations.

Four of the top five scorers have since moved on from a team that pushed Farmington to the final possession, then fell to the Central junior varsity less than 24 hours later.

The Trojans will be bolstered on the roster by standout performers in other sports, such as cross country star Ezekiel Sisk and football receivers Gavin Portell, Gavin Pinson and Luke Brabham.

St. Paul presents a dynamic group of guards with excellent speed an ability to attack off the dribble, especially at the Class 1 level.

Success for the Giants may be determined by their ability to force turnovers and convert them into transition baskets, while also trying to develop a stronger scoring punch from the low post.

Garrett Dempsey leads the forwards as a top double-double threat.

Despite ultimately finishing four games below the .500 mark, the Kingston boys program seemed closer than ever to a significant breakthrough.

The Cougars advanced to multiple tournament finals, and was one victory short of capturing the first district title for the school in any athletic sport.

Senior forward Matt Nelson headlines a group of seven returning players. He is already the career leader in rebounds for Kingston, and surpassed 1,000 career points in early February.

Cody Yates starred during his varsity debut, an overtime home win over Herculaneum, and forces the opposition to defend more of the court entering his sophomore campaign.

Arcadia Valley has its 2020-21 season interrupted by quarantine, and even had to withdraw from the popular Central Christmas Tournament.

But it concluded with a more coveted plaque. The Tigers executed a brilliant first half against Kingston, and their large senior class ended an 11-year district title drought.

Any hopes of similar results will be dependent on the maturity and skill of a revamped lineup that returns just a single starter and top reserve.

Valley capitalized on a favorable two-week stretch last year to start 6-0 for the first time in decades, including a victory in the championship final of its home tournament over Kingston.

But that squad was stacked with seniors, and the Vikings are now tasked with replacing four starters and at least three reliable reserves.

The most significant Valley returner is a First Team all-conference player, as junior Colby Maxwell becomes an even greater focal point of the offense.

Defenses will obviously shadow Maxwell, who is a threat off the dribble and from the perimeter, so teammates like seniors Carter Jackson and Carson Loughary need to provide scoring assistance.

Bismarck put an extremely young varsity roster on the floor last season, and often struggled to play with consistent poise over a full game.

The hustle was there as the Indians tried to employ buzzing defensive pressure, but an excessive number of fouls enabled opponents to pile up free throws and break the flow of action.

The Indians have a new head coach, and Joe Jackson inherits at least eight available players who were part of the regular rotation.

Tanner Martinez can work from the wing or inside while Garrett Mork and Sven Wilson form a solid core of sophomores that should benefit from the previous year of experience.

PARK HILLS – Kendall Horton opened the game with an emphatic block, and capped the first half by tipping in a missed 3-pointer as time expired.

Blackcats tested by AV, get another close win

FREDERICKTOWN – With a major frontcourt presence forced out of the lineup, the Fredericktown boys basketball team could take nothing for grant…

BOURBON, Mo. – Despite being outworked at times on the boards and committing 13 turnovers in the first half on Wednesday night, the Valley boy…

PARK HILLS – Whether he received adulation or criticism, finished a winning drive or missed a desperation heave at the buzzer, Jobe Bryant com…

Brawl breaks out between Cowboys, 49ers fans outside AT&T Stadium

These rare photos show Tom Brady from his baseball days

These rare photos show Tom Brady from his baseball days