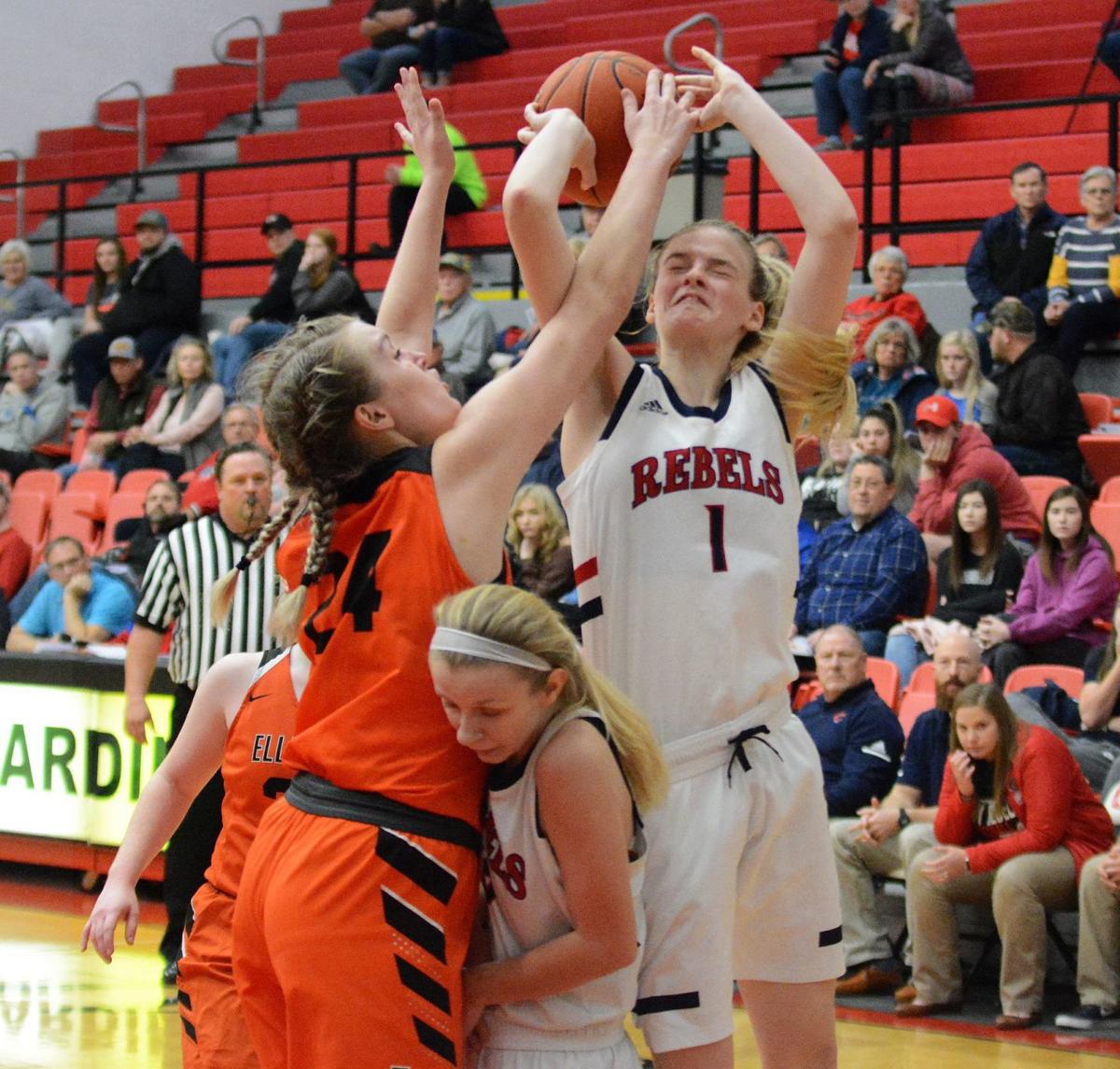 Central junior Kaley Kimball (1) draws a shooting foul against Ellington senior Gracie Price (24), who simultaneously crashes through a screen set by Abby Holmes during fourth quarter action on Saturday at the Rotary Shootout. 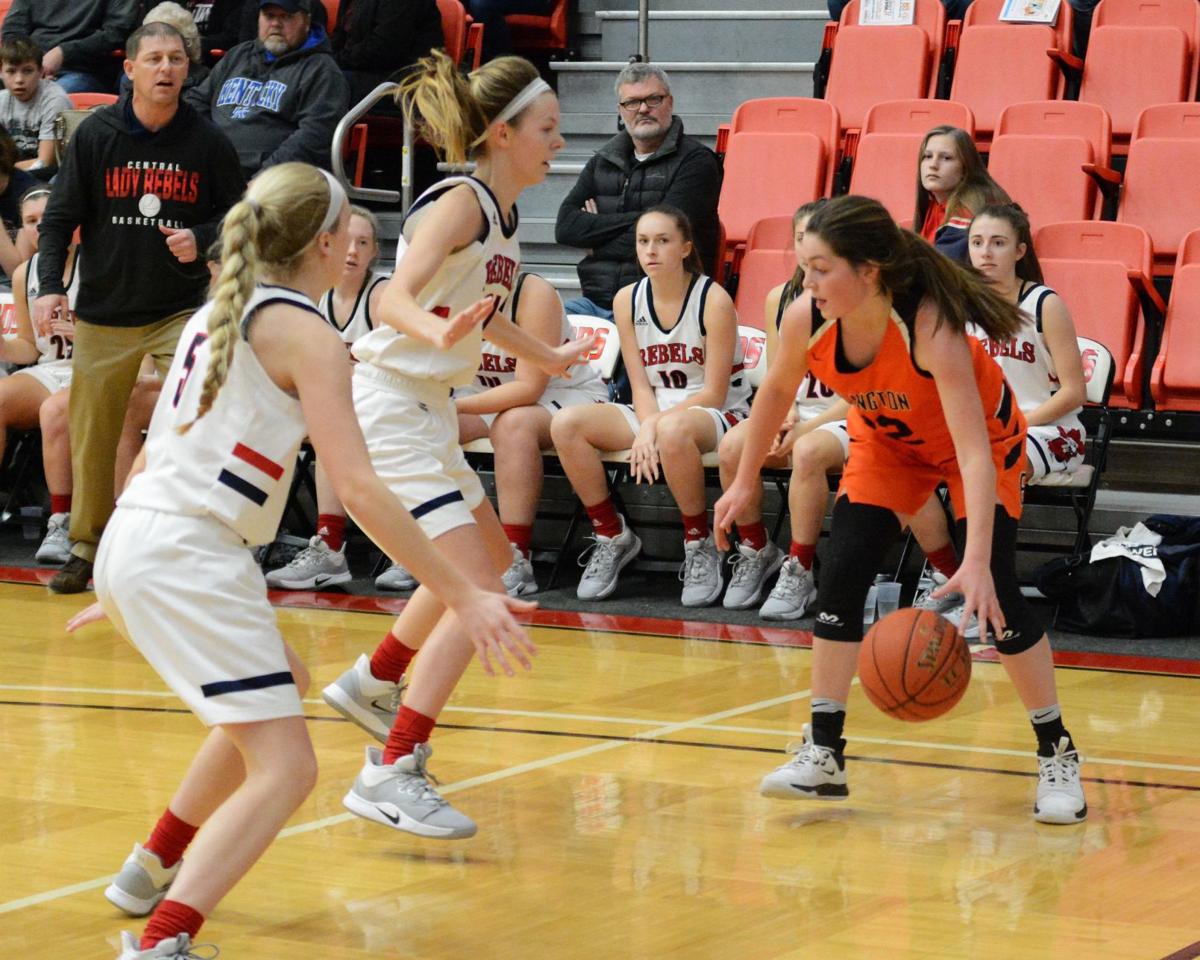 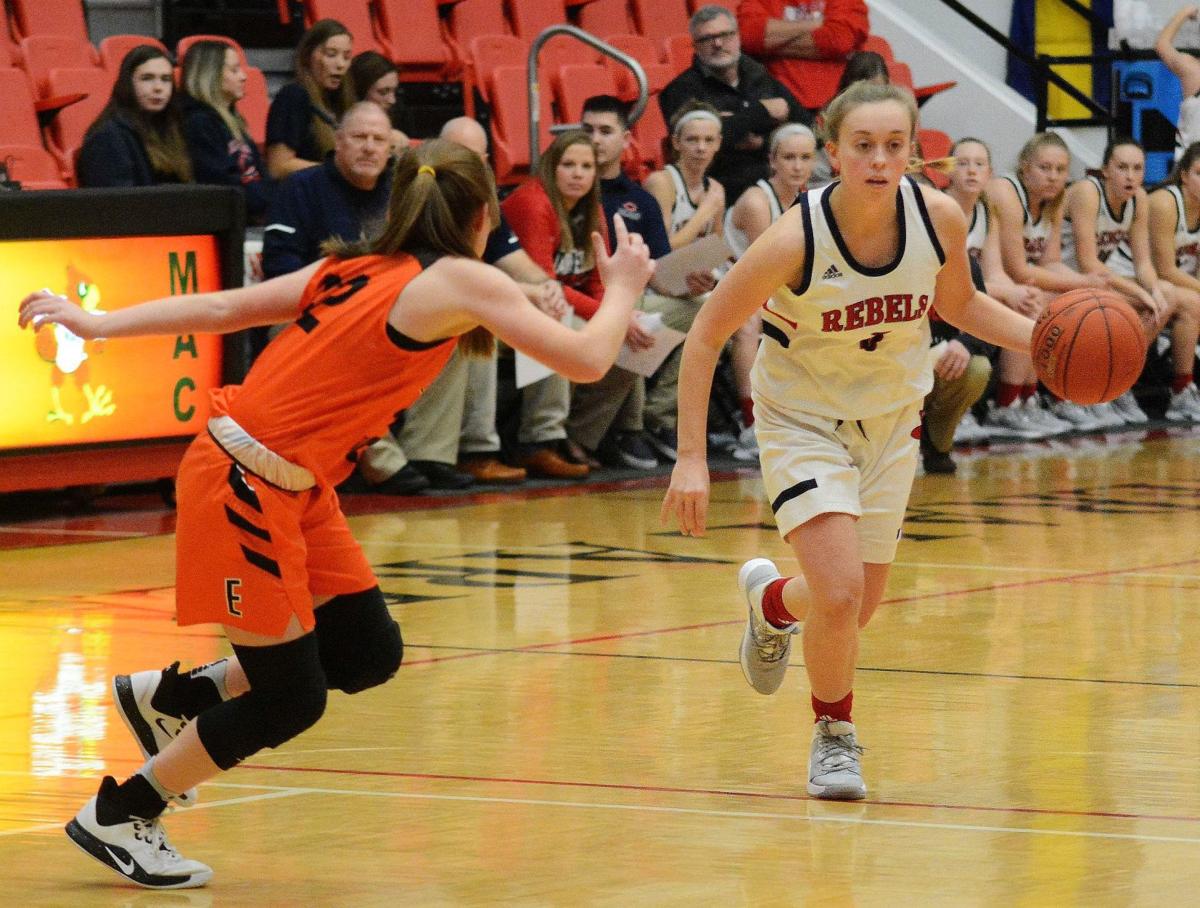 Central senior Avery Norris (3) dribbles into the frontcourt while guarded by Ellington freshman Kaylee King during the first quarter on Saturday. 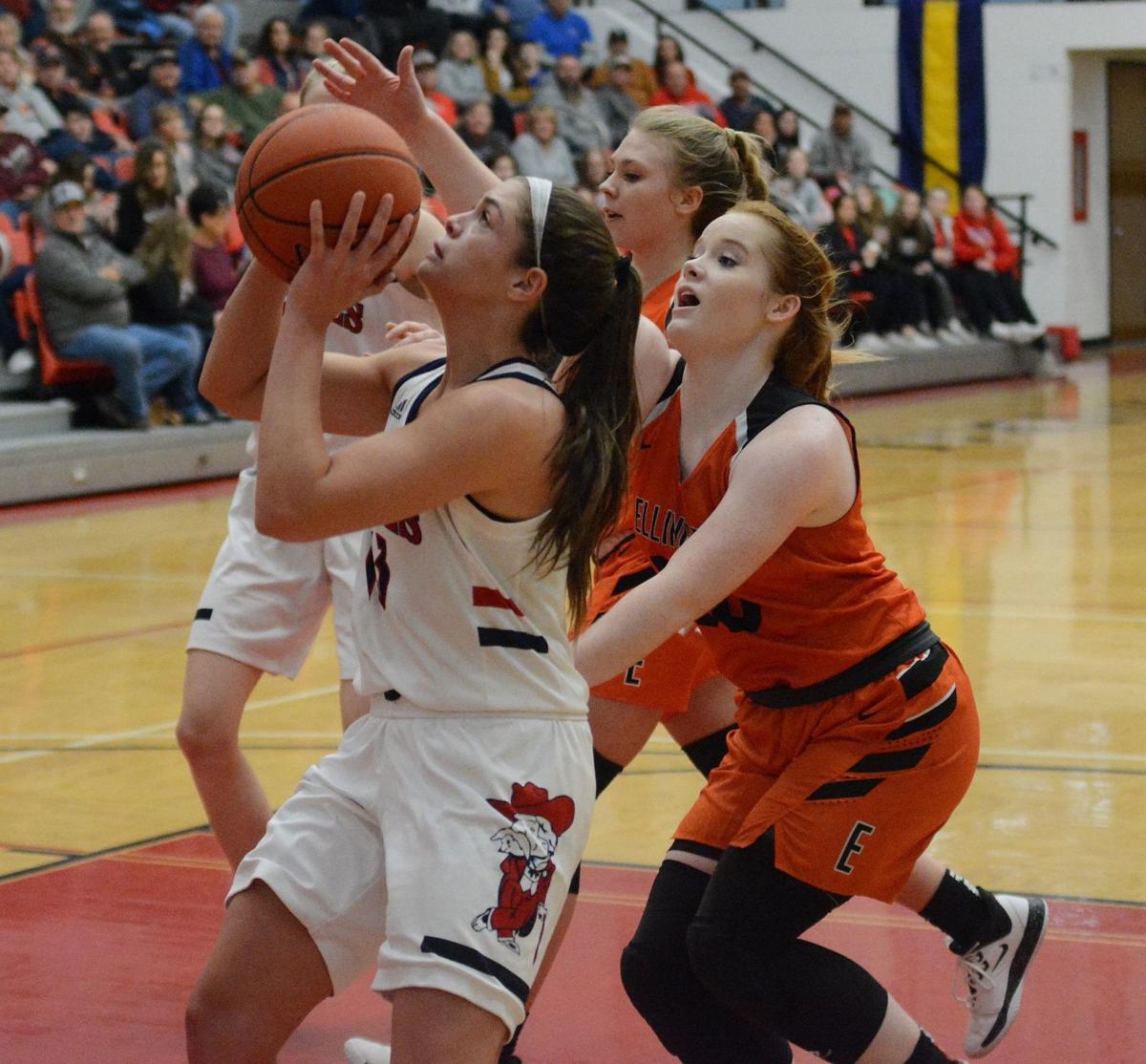 An 8-0 scoring surge over the first 68 seconds of the fourth quarter shifted momentum toward the Lady Rebels, who edged Ellington 57-49 at the Rotary Shootout to stay unbeaten.

Sophia Horton netted 10 of her game-high 20 points during the final period after watching more than 10 minutes of the first half from the bench with two early fouls.

Central (7-0) overcame an extended stint without its most dangerous threat on the court rather well to carry an eventual 26-21 lead at halftime.

Ellington (4-2) proved to be resilient and defiant with just one upperclassmen on its varsity roster, but widespread foul trouble harmed its chances to obtain a signature win on the Mineral Area College floor.

The Lady Rebels capitalized on the significant free-throw disparity that resulted, knocking down 25-of-38 compared to 7-of-8 by Ellington.

Freshman guard Kaylee King shined with 16 points, and capped a 9-0 spurt to open the third quarter on a transition layup after Conkright drained an igniting 3-pointer at the outset.

Central began to emerge from a modest slump when sophomore guard Madison Holmes threaded a pass through traffic to Kaley Kimball for a conventional 3-point play.

King answered with a nifty cross-over drive to the rim, then added spinning bank shot as Ellington concluded the stanza maintaining a 38-34 edge.

Horton quickly brought the Lady Rebels even by ripping away an offensive rebound of a missed free throw and hitting the putback through contact on a 3-point play.

Avery Norris, who tallied 15 points, added a runner off the glass for a sudden 42-38 lead after fellow senior Abby Holmes intercepted an outlet pass.

Kaley Kimball dribbled toward a screen set by teammate Abby Holmes, and Price fouled out trying to challenge the shot as Holmes was sandwiched in the collision with 5:36 to play.

Gretchen Hackworth stepped up for a 3-pointer that narrowed the Ellington deficit to 49-47 with 2:36 on the clock. But the Lady Rebels responded with a patient and clinching 8-0 run.

Norris exploded down an open lane for a crucial layup, and Horton slashed from the left side on the next Central possession for a strong finish.

Conkright compiled 14 points plus 14 rebounds while Hackworth scored 11 in defeat. The Lady Whippets erased an immediate 7-0 hole to lead 11-10 before the first quarter was done.

Central was tough along the boards in response, getting a third-chance follow from Madison Holmes along with nine pivotal points from Norris in the second quarter.

Ellington opened the season on a four-game win streak, and suffered its only other loss on Tuesday, 35-32, against undefeated Black River League rival South Iron.

PARK HILLS – Landon Bone was a lethal 6-of-7 from 3-point range Saturday as Potosi defeated West County 60-32 for its first victory as part of the Rotary Shootout.

The Trojans (1-5) had the stronger shooting performance in a game marked unofficially by a combined 58 turnovers. The Bulldogs (1-4) were just 3-of-23 from the field in the first half.

Bone connected four times from beyond the arc during the third quarter, including twice in a row after holding a 32-10 lead at halftime. He finished with 20 points overall.

West County drew within 42-24 when Noah Winch and Matthew Menzel sandwiched layups around a frontcourt steal, but the Trojans capped the third quarter on a 7-0 spurt.

Peppers capped a 9-0 start after Bone and Walton struck from the perimeter, and later converted a 3-point play to help Potosi establish a 19-5 advantage.

Sonny Amabile drove the length of the court to score as time expired, and Windsor celebrated a 72-71 victory in the third-place game.

Windsor gashed the Rebels’ defense to shoot 66 percent overall, and held leads of 34-29 at halftime and 50-46 through three quarters.

Amabile finished with 27 points on 10-of-13 from the field, and went 5-of-7 from beyond the arc while also dishing out nine assists.

Grant Siegel added 14 points on 4-of-5 from 3-point range for the Owls. Norman Alford chipped in 12 points, and Matt Martin claimed 11 rebounds.

Breven McMullen dazzled in defeat with 38 points for Central (2-2).

Central junior Kaley Kimball (1) draws a shooting foul against Ellington senior Gracie Price (24), who simultaneously crashes through a screen set by Abby Holmes during fourth quarter action on Saturday at the Rotary Shootout.

Central senior Avery Norris (3) dribbles into the frontcourt while guarded by Ellington freshman Kaylee King during the first quarter on Saturday.