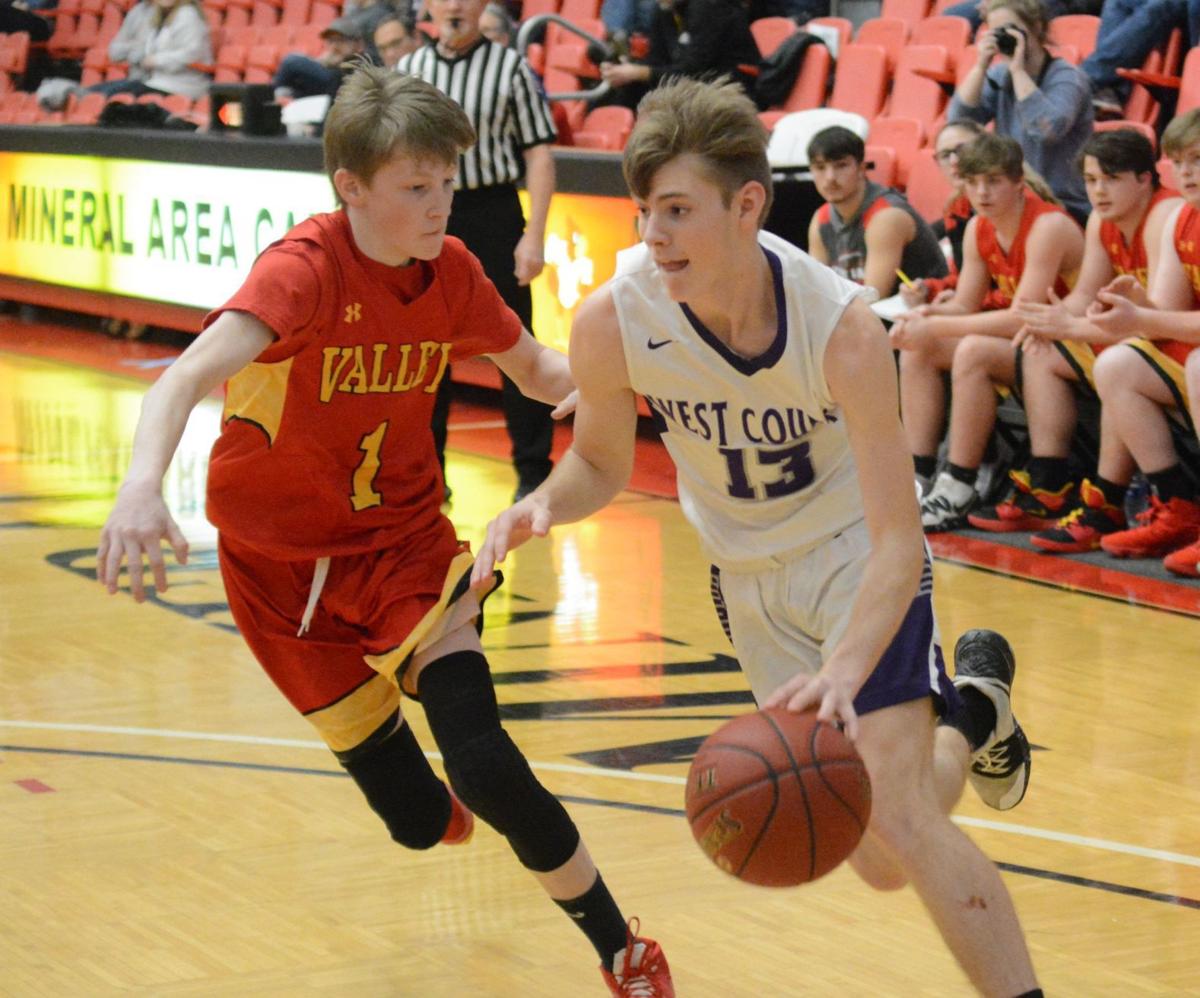 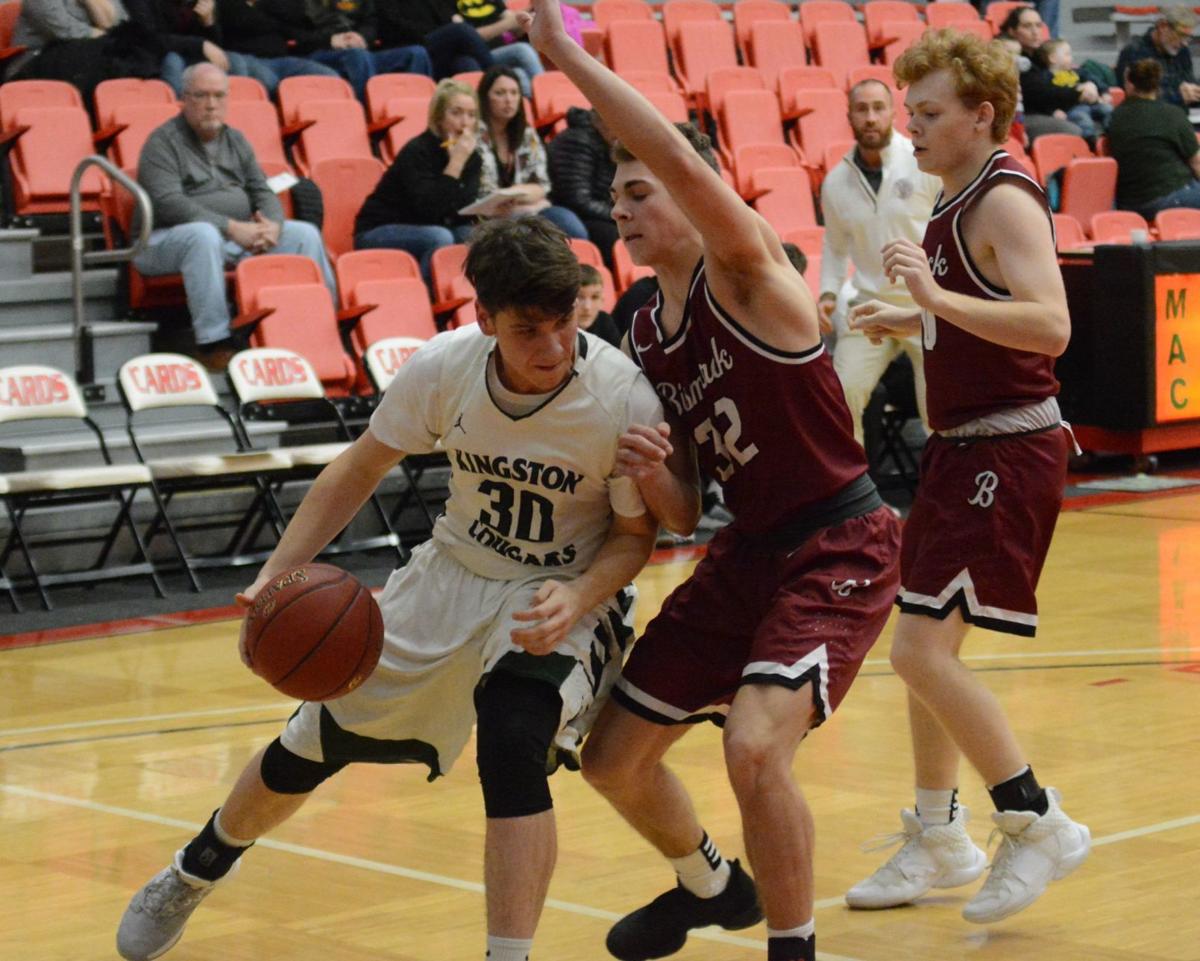 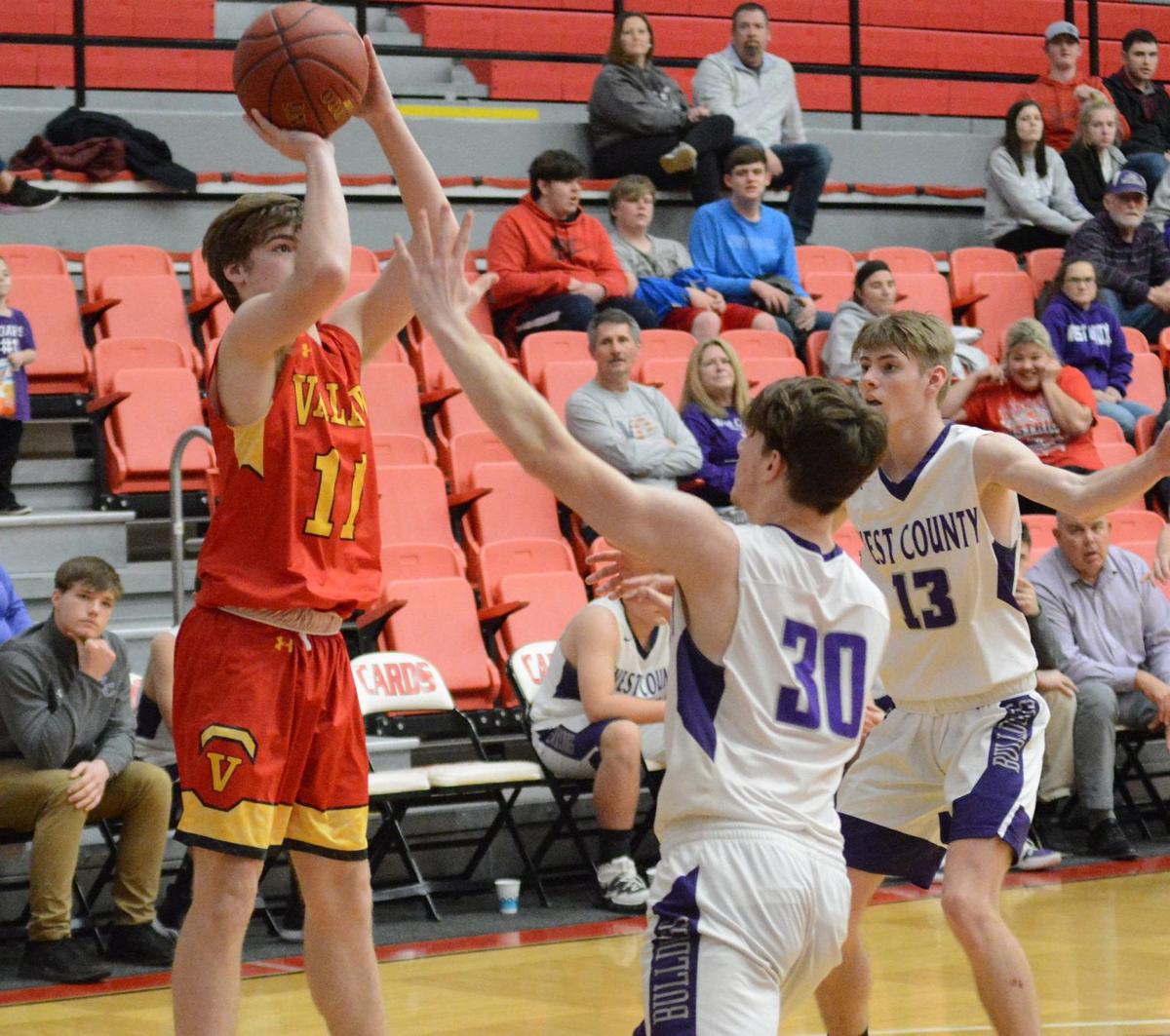 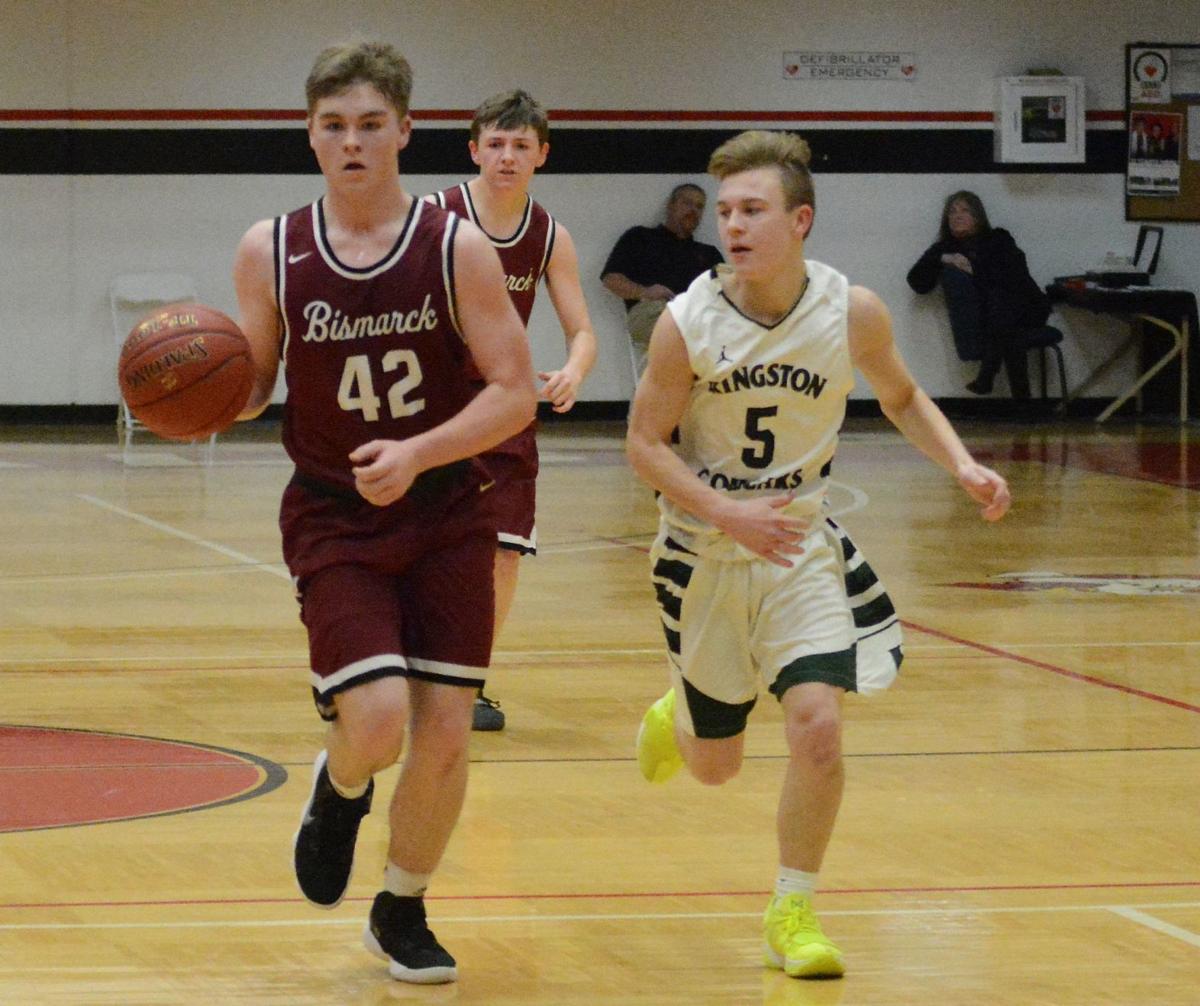 Bismarck freshman Isaiah Faulkner (42) is chased by Kingston junior Bobby Berger (5) after making a steal in the second quarter of an MAAA Tournament boys consolation game on Wednesday night.

PARK HILLS – The West County boys basketball team flipped a switch of intensity to produce a 30-point second quarter, then immediately topped that output after halftime.

The Bulldogs outscored Valley 37-18 during an explosive third period, and triumphed 83-49 in the MAAA Tournament consolation bracket on Wednesday night.

Cody Moore netted a game-high 14 points, and Cameron Stevens compiled 13 points and nine rebounds while going 7-of-9 from the line for West County (6-15).

Stevens extended a 35-23 halftime lead with a pair of 3-pointers, and the Bulldogs connected five more times from long range before the stunning third quarter concluded.

A follow jumper by Noah Winch and two triples by freshman Caden Merrill pushed the margin to 68-37 after Matthew Menzel and Grady Masters continued the 3-point barrage.

Valley (7-14) controlled the opening stanza and jumped ahead 10-3 as senior Ethan Matthews made a steal and layup, sank a 3-pointer and drew a charging foul spanning 90 seconds.

The lead reached 15-5 when Tyler Courtway got the friendly roll on a 3-pointer, but the Vikings spent the next seven minutes mired in turnovers and foul trouble.

West County awakened with a fast 11-0 run. Moore and Morgan converted steals into points during a string of four straight takeaway stops, and Morgan added a go-ahead three.

Stetson McCoy retaliated for Valley by scoring through contact at 17-16, but the Bulldogs wore a path to the charity stripe to punctuate the half with a 19-6 stretch.

West County will face Kingston on Saturday at 11:30 a.m. Those teams have split two previous meetings this season.

PARK HILLS – The Kingston boys had to reassess their overall effort and execution on Wednesday night after struggling Bismarck refused to fold through three competitive quarters.

Sparked by more determined defense and rebounding over the last nine minutes, the Cougars closed with a 27-8 scoring surge to advance in MAAA Tournament consolation action.

Senior Troy Gildehaus tallied 13 of his game-high 22 points in the fourth quarter, and collected eight rebounds plus three steals to power a 64-39 victory.

Matt Nelson totaled 14 points and 11 rebounds, and Dylan Morrison scrapped for 10 rebounds and five steals for Kingston (9-11), which next squares off against West County on Saturday.

Gildehaus and Nelson each finished strong pivots in the post and contributed two field goals each to an 11-0 run that pushed the Cougars’ lead to 58-34.

Bismarck (1-17) plunged late to a 15th consecutive defeat, but not without a solid fight after delivering some productive half-court offense to rally in the third quarter.

The Indians trailed 35-16 before mounting a sustained 15-2 push that nearly spanned five minutes. It was highlighted by three 3-pointers from sophomore guard Ethan Dugal.

Kingston regained momentum before the period expired. Landen Hoefelmann snapped the modest drought with a key putback, and Bobby Berger provided an ensuing steal and layup.

The Cougars established a 28-14 lead after forcing 14 first-half turnovers. Morrison opened the game by taking consecutive steals to the rim for uncontested layups.

Isaiah Faulkner picked up the first five Bismarck points on a perimeter jumper and two free throws, and ended with 10 before rolling his right ankle on a loose-ball scramble in the final seconds.

Kingston was clinging to a 10-7 advantage through one quarter, but found Nelson in the post for three baskets leading into the intermission.

Dugal had a team-high nine points, and Campbell posted nine points with nine rebounds for Bismarck.

FARMINGTON – All five usual starters for the Farmington boys basketball team were given the night off, and several seniors had no problem embr…

PARK HILLS – The strategic stalemate was indeed bizarre, yet made perfect sense.

BONNE TERRE – The longstanding and emotional rivalry between Farmington and North County has begun to simmer once again on the basketball court.

Knights close out Valle to get Central rematch

Bismarck freshman Isaiah Faulkner (42) is chased by Kingston junior Bobby Berger (5) after making a steal in the second quarter of an MAAA Tournament boys consolation game on Wednesday night.