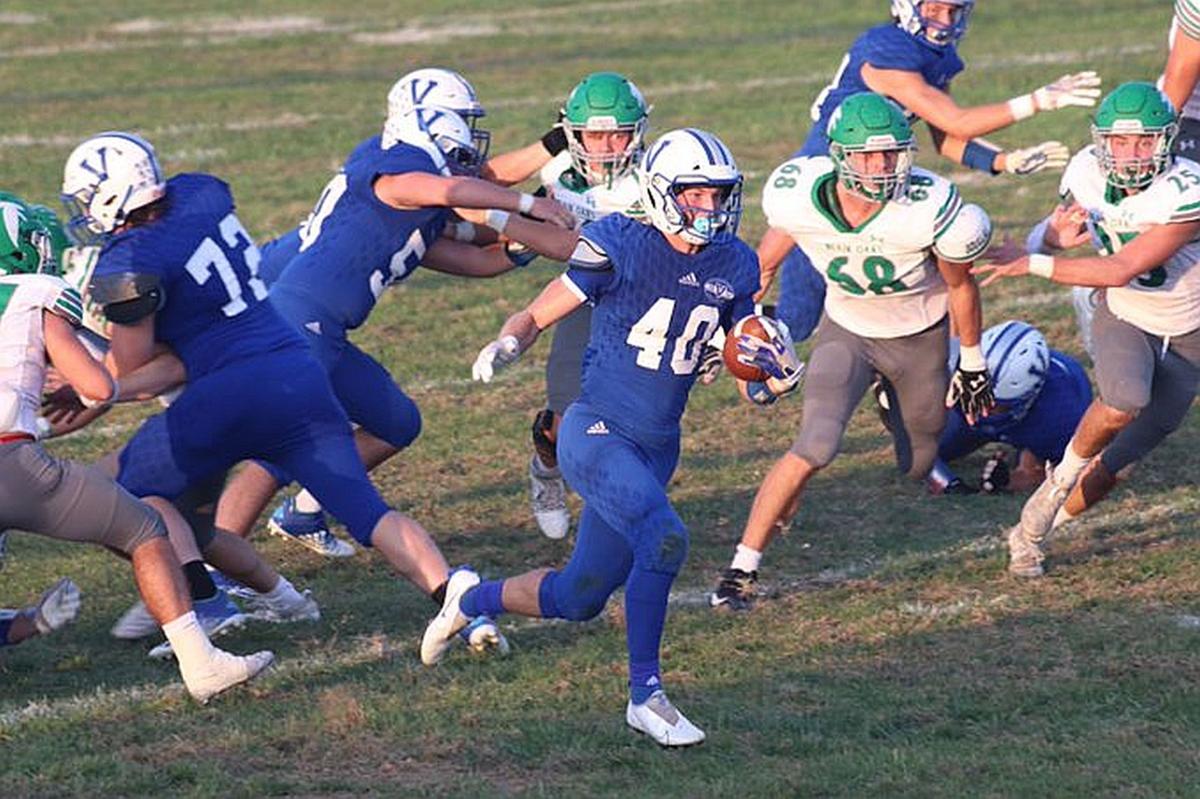 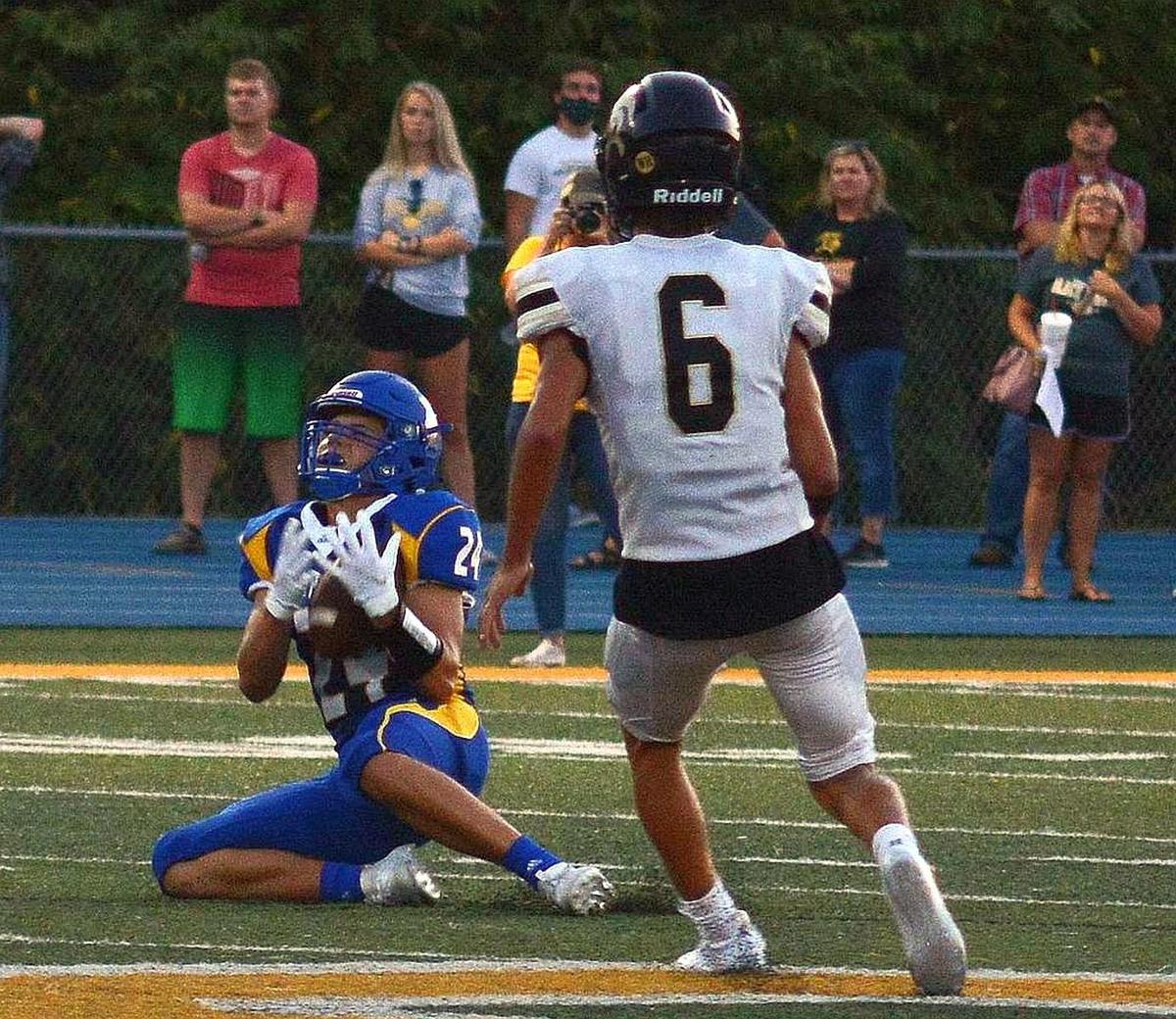 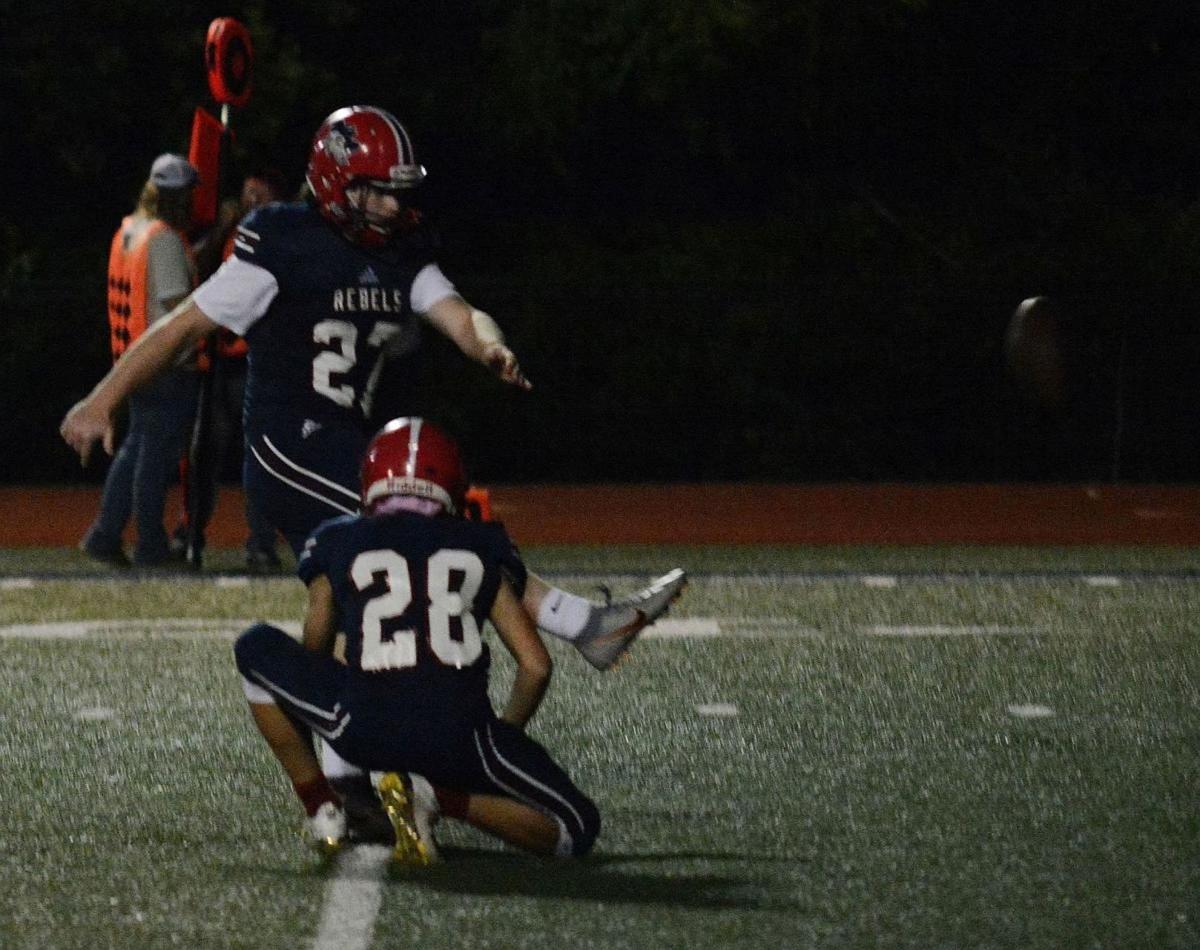 In this Sept. 4, 2020 file photo, Central senior Justin Bridges kicks an extra point from the hold of Ty Schweiss (28) during third quarter action against Scott City.

STE. GENEVIEVE – The Valle Catholic football team sought a massive challenge on short notice, and answered the ball with a victory sure to resonate across the state.

Despite committing seven turnovers in less than three quarters, Valle Catholic (5-0) snapped the 51-game regular-season win streak of the Falcons dating back to October 2014.

Aiden Heberlie broke away after making a leaping catch along the right sideline for a tie-breaking, 59-yard touchdown on the second play of the fourth quarter.

The Warriors then delivered three huge defensive stops to hang on as Blair Oaks (4-1) was on the verge of drawing even.

Sophomore quarterback Dylan Hair found Carson Prenger for a 33-yard gain, and Jacobi Marble set up first-and-goal from the 10 after an excellent grab netted 24 yards.

The Falcons attempted a pair of slants after losing ground on a running play, but Drew Bauman tipped the third-down pass before Cory Stoll deflected and Heberlie intercepted the next throw.

Blair Oaks began its next possession at the Valle 40, but could not move the chains once. The visitors were left with no timeouts and 32 seconds to operate after Kolten Naeger hooked a 30-yard field goal try.

Valle Catholic captured the Class 1 state title last December, and was unceremoniously moved to Class 3 based on cumulative postseason success over a six-year period as a private school.

Once I-55 Conference opponent Grandview canceled due to insufficient roster numbers earlier this week, the Warriors embraced a chance to be tested against the mighty Falcons.

Although Blair Oaks obtained three takeaways within the first six minutes, the Warriors struck first as Austin Burnett caught an 11-yard strike from Fallert on his knees.

The teams traded interceptions to begin the contest, but Bauman managed to return his pick 76 yards to the Blair Oaks 15.

Hair slipped past a defender to forge a 7-7 tie from 20 yards on a keeper, and connected on a 55-yard pass to Prenger to spark another scoring drive following a Valle fumble.

But the Warriors were otherwise dominant defensively during the first half, yielding just 85 yards to the Falcons to alleviate the sting of their miscues.

Fallert, escaping the pocket under heavy pressure on fourth-and-7, heaved the ball in desperation toward Heberlie, who jumped above two Falcons to bring down a tying 34-yard TD at 14-14.

Heberlie ended with five receptions for 130 yards, and picked up 26 over the middle as Valle surged ahead 20-14 with 5:45 left in the second quarter on a Fallert sneak.

Blair Oaks began the second half with its most forceful drive. Hair rushed for 15 and 16 yards on back-to-back plays, and Prenger caught a tipped pass for a 10-yard touchdown and 21-20 edge.

Gavin Wekenbourg made his second interception of the game moments later, but Valle Catholic stopped a fourth-down run at its 27.

The Warriors were spurred by a trick play late in the third as Burnett took a hand-off on a sweep and fired to wide-open running back Bryce Giesler for a 40-yard gain.

Fallert again scored from the 1, then flipped a two-point conversion toss to Burnett to move ahead 28-21. Fallert carried 18 times overall for 55 yards.

The Falcons barely needed a minute to retaliate again. Jake Closser caught a 36-yard pass from Hair in stride, and the extra point made it 28-28.

Hair was 12-of-39 passing for 220 yards, and had a team-high 81 rushing yards. Carson Bax registered a sack, while Cade Stockman and Ian Nolph recovered fumbles for Blair Oaks.

Grant Manion caught a slant pass from quarterback Jett Bridges, and sprinted 81 yards for a touchdown on the second Central snap.

Dayshawn Welch punctuated another two-play possession with a 62-yard burst early in the second quarter, and amassed 147 yards on 16 carries for the Rebels.

Wade Mercille rejoined the lineup for Potosi (2-3, 0-2) with 72 yards on 14 carries, and sparked the lone scoring march by his team with a punishing 20-yard gallop.

After a 22-yard run by Blake Henson created a first-and-goal opportunity from the Central 9, senior QB Andrew Coleman scored from the 2 on fourth down to make it 10-6.

Welch found the end zone just 38 seconds later, then added a 23-yard run when the Rebels consumed nearly seven minutes off the clock heading into the intermission.

Central committed nine penalties – none more severe than five yards – but allowed no further points to the Trojans despite giving away three first downs by jumping offside.

Bridges was 10-of-18 passing for 176 yards, carried nine times for 102 yards, and made two dazzling athletic plays in the second half.

He opened the third quarter by eluding pressure and finding Slade Schweiss deep for a leaping catch and 42-yard gain. Welch finished that drive with his second TD from the 1 to make it 26-6.

The Central defense followed with two consecutive three-and-out series – including a big tackle for loss by Eligh Dyess – sandwiched between a Potosi takeaway as Malachi Peppers intercepted Bridges.

Bridges atoned almost immediately, first crossing midfield on a 29-yard keeper. He then rolled left on a scramble and raced 35 yards before diving past the pylon on the initial play of the fourth quarter.

Potosi calmly drove 70 yards over the next six minutes, but stalled when a fourth-and-3 run fell short of the marker near the Central 10.

Manion had three receptions for 92 yards, and Jobe Bryant chipped in four catches for Central, which hosts Ste. Genevieve on Friday.

Coleman completed 3-of-9 passes in the game, and Blake Henson picked up 35 yards on six carries for the Trojans, who will face Perryville in week 6.

North County (3-2) forced three turnovers, outgained the visiting Rhinos 406-123 in total yardage, and surged to a 48-0 lead in the second quarter.

Nolan Reed completed 5-of-7 passes for 72 yards and two touchdowns, including a 30-yard strike to Claywell that capped the opening drive. He also kept the ball three times for 48 yards.

Blake Head made it 13-0 with a 5-yard run. Karter Kekec extended the lead with an 18-yard scamper as the Raiders tallied 35 points in the second quarter alone.

Teagan Keller provided a 13-yard TD catch, and Kaelen Lee-Bell rumbled 33 yards to the end zone on the next North County drive for a 34-0 advantage.

Claywell added his pick-six just 20 seconds later, and Isaac Easter scored from the 1 when the Raiders regained possession late in the second quarter.

Agape snapped the shutout bid with 7 seconds remaining before halftime, but Jackson Reed recovered a fumble and Shane Hedrick capitalized with a 4-yard touchdown run in the third quarter.

Jobe Smith notched a team-high 71 yards on just four carries, and Dane McCoy picked up 33 yards on seven attempts down the stretch.

Payden Allen compiled six tackles and Kekec chipped in two receptions for the Raiders, who will travel to unbeaten and state-ranked Festus in week 6.

Payton Matthews netted touchdowns on each of his two receptions, and the Dragons scored on four consecutive drives during the first half to beat St. Pius 59-28.

Boyer was responsible for six touchdowns – three passing and three rushing – and was 6-of-11 passing for 162 yards while also covering 138 yards on 16 carries.

McBride had a 60-yard scamper to the end zone after St. Pius struck first, and later extended a 28-14 halftime margin with a 32-yard TD to begin the third quarter. He totaled 123 yards on 12 attempts.

Nathan Ruble provided a couple of touchdowns prior to intermission for the Lancers, who pulled within 35-20 on a 5-yard run by Michael Bollinger.

Boyer answered with a 21-yard scoring keeper, and bumped the Ste. Genevieve lead to 49-20 on a 31-yard strike to Matthews, who previously reeled in a 25-yard touchdown.

Bret Bieser had a 16-yard touchdown among three total catches for 63 yards, and paced Ste. Genevieve (2-3) defensively with nine tackles plus a fumble recovery.

Kaden Flye contributed a 43-yard reception while Klayton Squires made an interception and Jacob Johns added six tackles for the Dragons.

Boyer increased a 49-28 difference with a 61-yard touchdown jaunt in the fourth, and freshman Bryant Schwent nailed a late 32-yard field goal.

FARMINGTON – From a physical or strategic perspective, Farmington operated mostly according to plan against visiting Festus during a battle of…

STE. GENEVIEVE – Valle Catholic limited Herculaneum to just 2 yards in total offense during the first half, and celebrated Homecoming with a 6…

FREDERICKTOWN – In their second meeting in a little over a month, the Fredericktown Blackcats and Potosi Trojans went back and forth before Po…

Central rolls to 61-7 victory over Blackcats

FREDERICKTOWN -- In winning their first six games this season, the Central Rebels averaged 37 points per game.

In this Sept. 4, 2020 file photo, Central senior Justin Bridges kicks an extra point from the hold of Ty Schweiss (28) during third quarter action against Scott City.