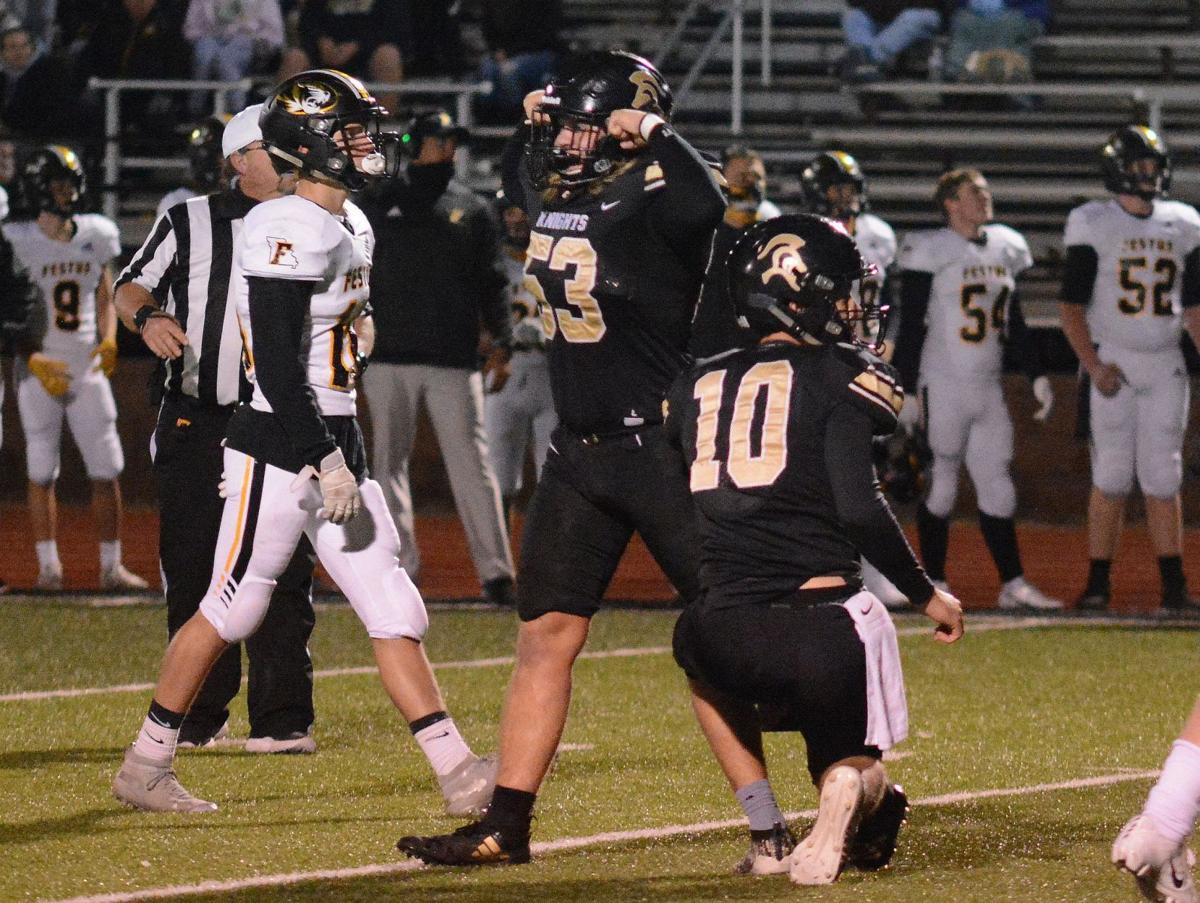 Farmington senior Kael Krause (53) flexes after kicking a 29-yard field goal from the hold of Kaden Files (10) as time expired to defeat Festus 10-7 in a clash of state-ranked football teams on Friday night in Farmington. 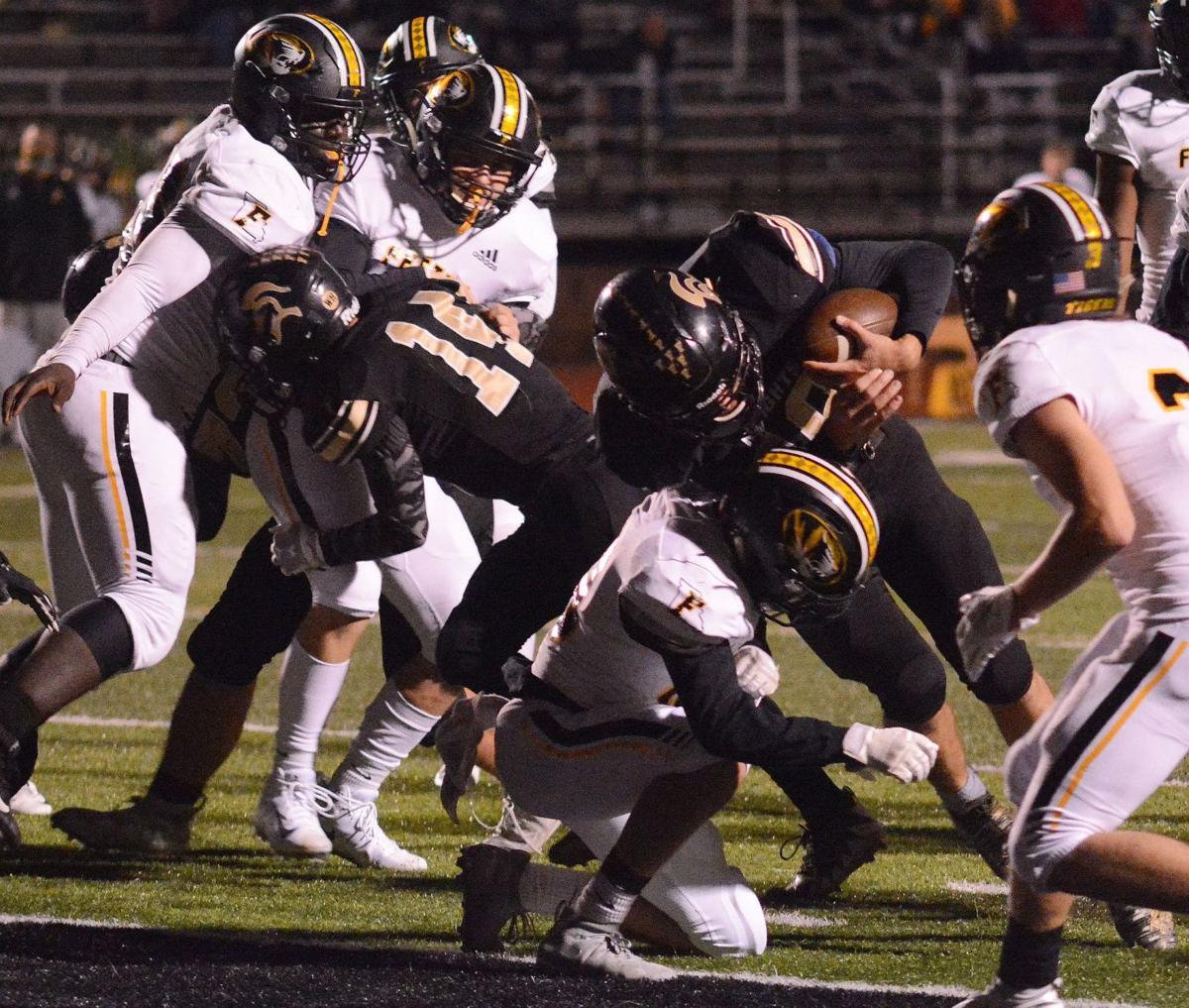 Farmington quarterback Kaden Files slams into a Festus defender ona 6-yard touchdown run while following the block of Brady Cook (14) during the second quarter on Friday night in Farmington. 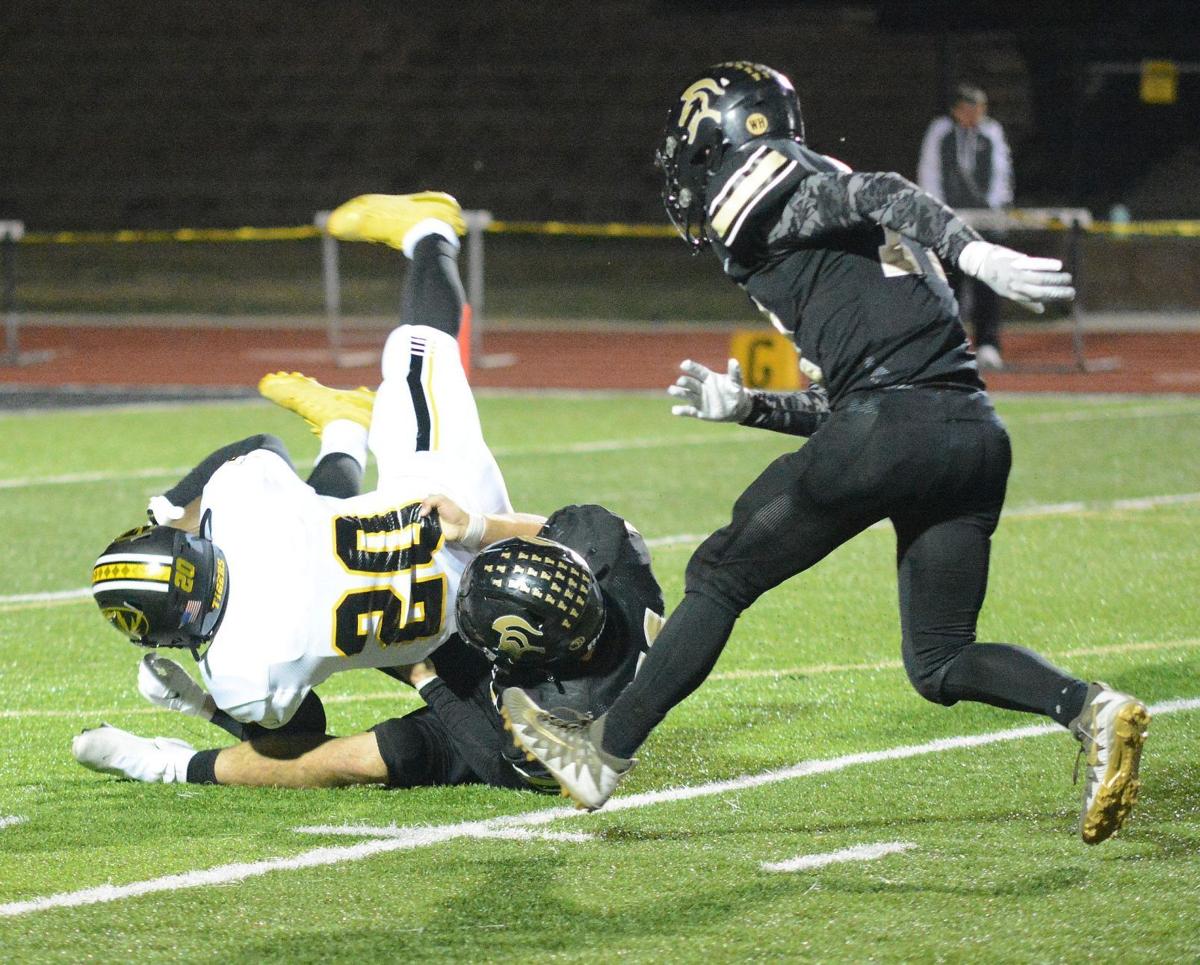 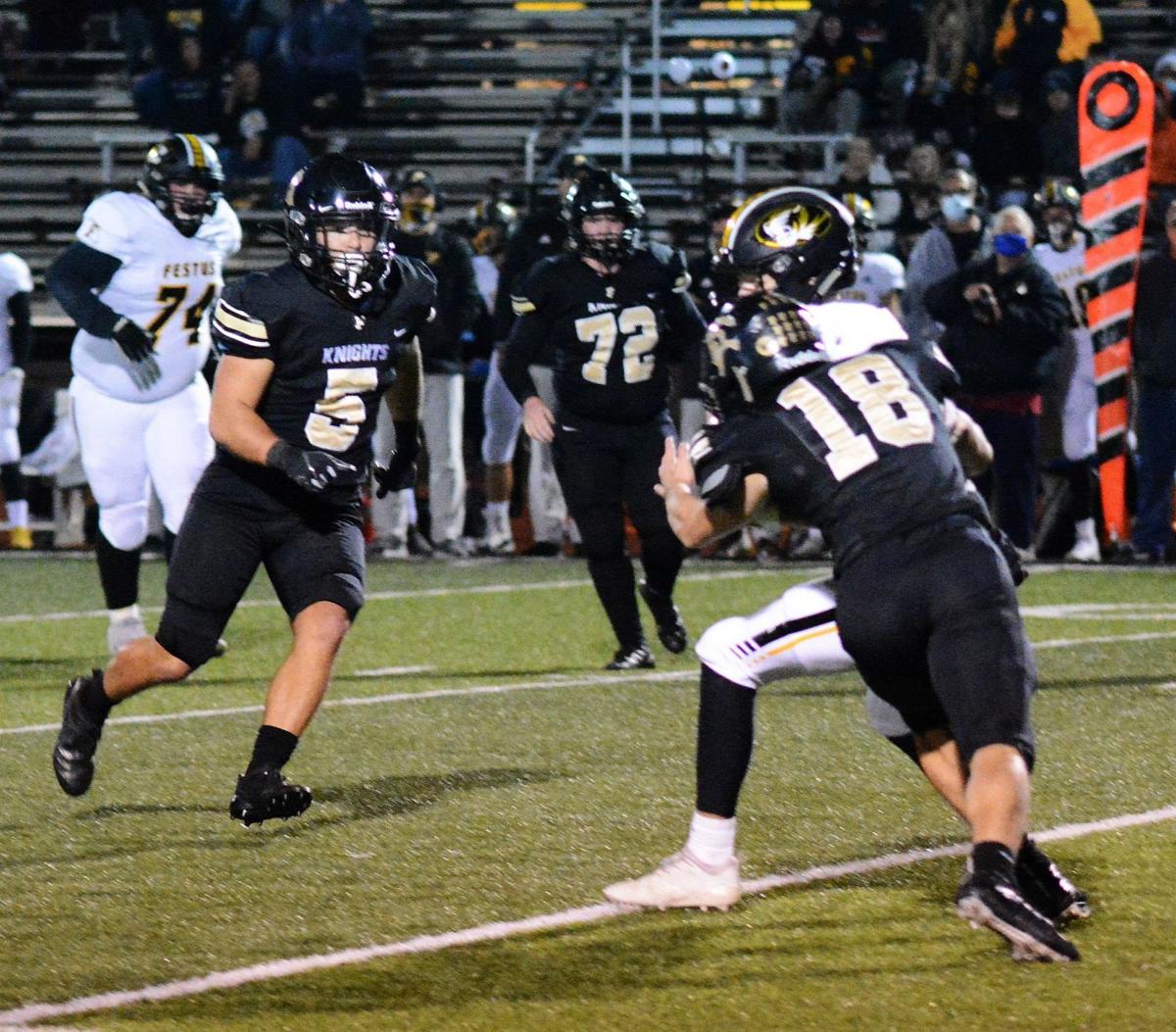 FARMINGTON – From a physical or strategic perspective, Farmington operated mostly according to plan against visiting Festus during a battle of state-ranked football teams on Friday night.

But after failing to finish three promising drives and losing their fragile lead on a blown pass coverage, the Knights suddenly had nothing to show for their stretches of dominance.

Farmington desperately needed one of its patented methodical and time-consuming marches in the fourth quarter, and successfully delivered five first downs on 15 consecutive running plays.

All-state senior kicker Kael Krause then drilled a 29-yard field goal as time expired after missing two previous attempts for a 10-7 triumph, handing the Tigers their first defeat of the season.

Braden Botkin plowed ahead for a team-high 159 bruising yards, and slid down in the center of the 12-yard line on his 36th carry before the clock was stopped with 3 seconds left.

Krause swung his powerful right leg, calmly turned toward his sideline and flexed in celebration without watching as his strike nearly split the uprights evenly for the victory.

Farmington (7-1), ranked ninth in Class 5, covered 59 yards on the clinching drive, and Festus (7-1) was powerless to delay the eventual outcome after burning its last timeout early in the fourth quarter.

Senior quarterback Kaden Files added 117 yards on 30 carries as the Knights enjoyed a massive disparity in time of possession.

With the exception of two runs by Drew Felker and an intercepted pass in the second quarter, Botkin and Files shouldered the offensive load behind a line that controlled play between the 20-yard lines.

The Tigers operated without their two main running backs, and would not penetrate the Farmington 40 until pulling even on a sudden jolt with 7:53 remaining in the game.

Senior quarterback Cole Rickermann found Kaian Roberts-Day wide open over the middle for a 53-yard touchdown before the extra point by Collin Doyel made it 7-7.

Rickermann sustained a number of hits while completing 6-of-18 passes for 109 yards, but extended the tying drive on fourth-and-6 from his 42 as crossing receiver Cayse Martin made a sliding catch.

Farmington opened the game with a punishing 20-play, 86-yard drive that spanned a whopping 10 minutes and 51 seconds. Botkin had 10 carries and Files provided the other nine while notching six first downs.

But Festus finally slowed the momentum on a tackle for loss by Desmond Davis, and Krause hooked his 32-yard field goal try without a clean snap and hold.

The Tigers were afforded only two possessions in the first half, ending on a punt and incomplete pass midfield. Fatigue appeared to befall their defense before halftime, but it still hung tough.

Farmington kept the ball for 13 plays on its second drive. Botkin had a 14-yard gain, and Files got 15 more on a scramble before scoring on a 6-yard keeper with 3:54 left.

Festus, ranked No. 3 in Class 4, endured a bizarre series of mistakes on its opening series of the third quarter, resulting from confusion involving the snap count.

The visitors were flagged four consecutive times for false starts, moving back to their own 1, and racked up eight of those same penalties over a stretch of 7 ½ minutes.

Farmington would force a punt and subsequently progressed from the 50 to the Festus 20 after Felker picked up 14 yards on a rare option pitch.

Inclined to pass for the first time on third-and-14 from the 24, Files lofted a ball toward Wyatt Westbook in the end zone, but safety Landen Yates timed his leap to make the interception.

The Knights had yet another chance to extend their 7-0 margin early in the fourth, but stalled in the red zone before Krause missed wide right from 24 yards out.

Two swing passes from Rickermann were dropped, and two other downfield throws were broken up by Felker and Westbrook in the first half.

Doyle had three catches for 45 yards to pace Festus.

Farmington will travel a short distance to face Central in the regular-season finale next week.

PARK HILLS – The Central football team beat Farmington at its own usual strategy of controlling the clock and dictating tempo, and earned a si…

STE. GENEVIEVE – Valle Catholic limited Herculaneum to just 2 yards in total offense during the first half, and celebrated Homecoming with a 6…

FREDERICKTOWN – In their second meeting in a little over a month, the Fredericktown Blackcats and Potosi Trojans went back and forth before Po…

Farmington senior Kael Krause (53) flexes after kicking a 29-yard field goal from the hold of Kaden Files (10) as time expired to defeat Festus 10-7 in a clash of state-ranked football teams on Friday night in Farmington.

Farmington quarterback Kaden Files slams into a Festus defender ona 6-yard touchdown run while following the block of Brady Cook (14) during the second quarter on Friday night in Farmington.