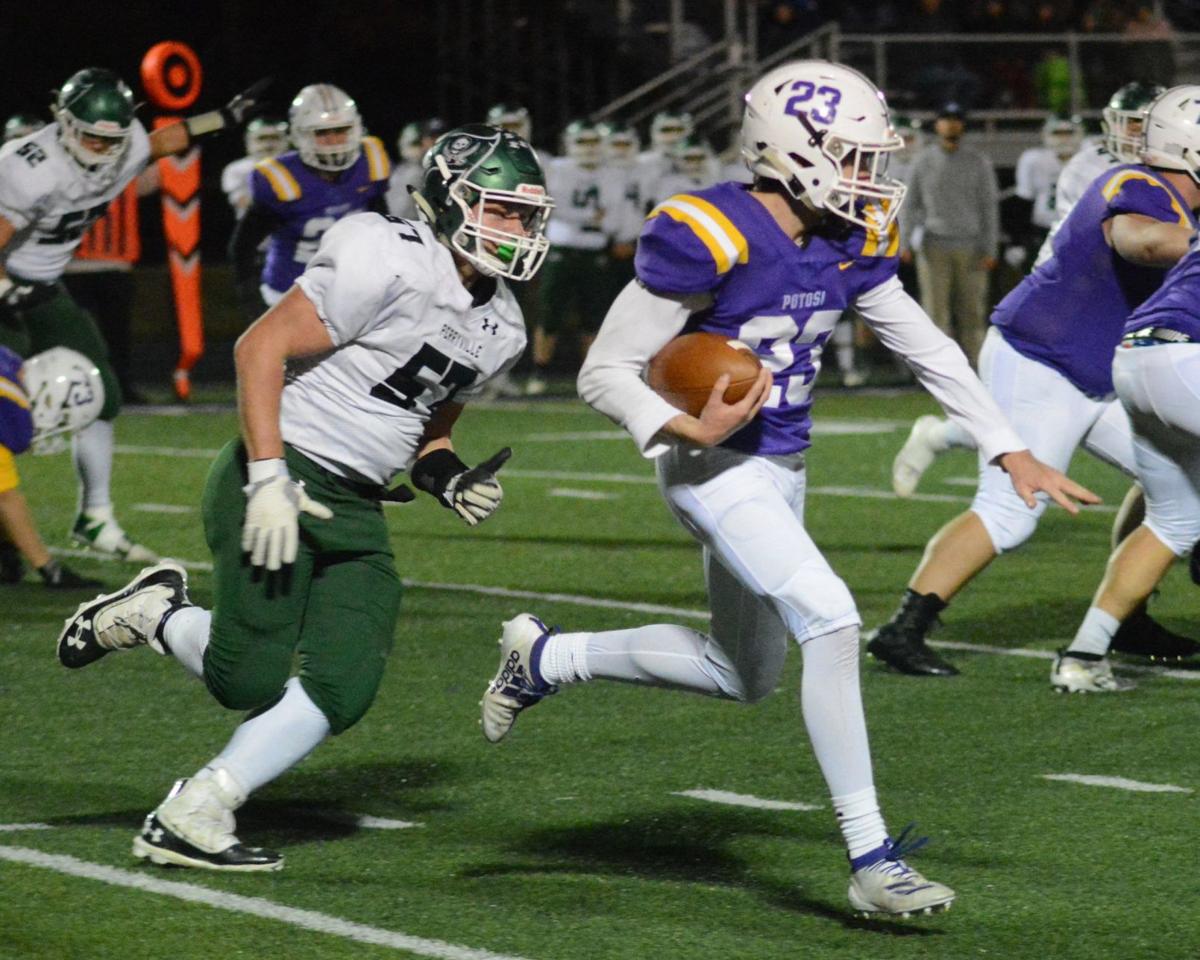 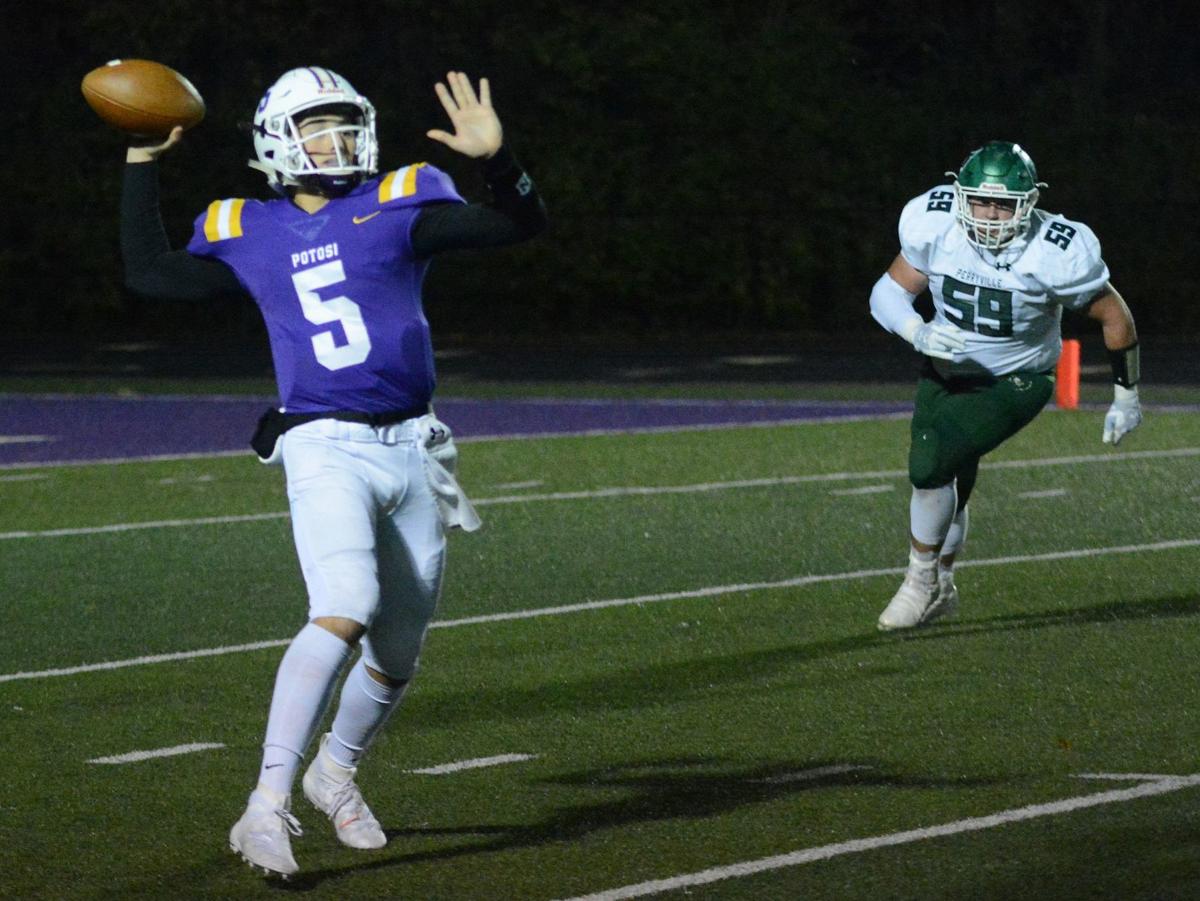 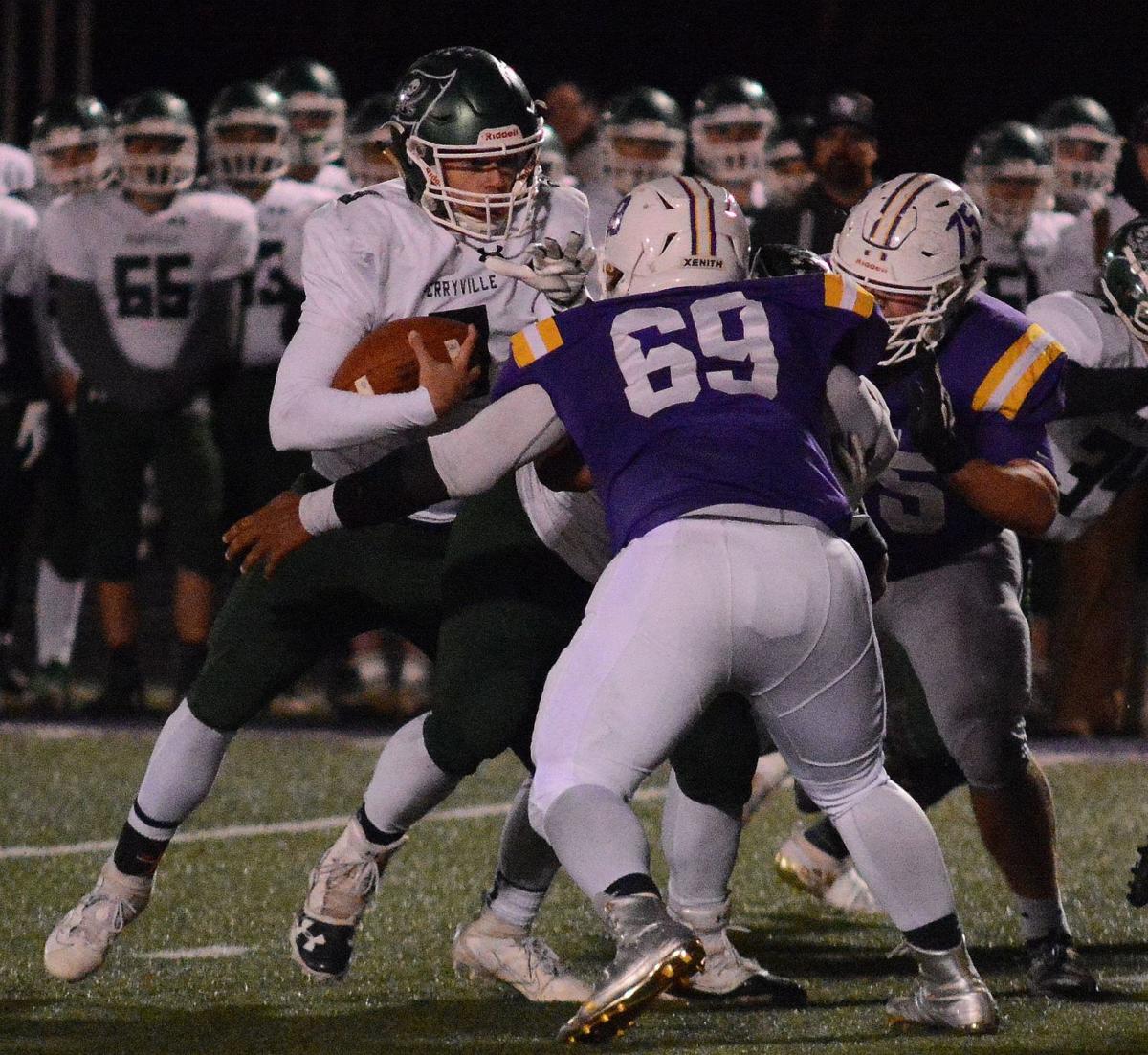 Potosi defensive linemen Hunter Moon (75) and A Mondre Hill (69) fight through a block to stop Perryville quarterback Evan Daugherty (3) in the backfield during fourth quarter action on Friday night. 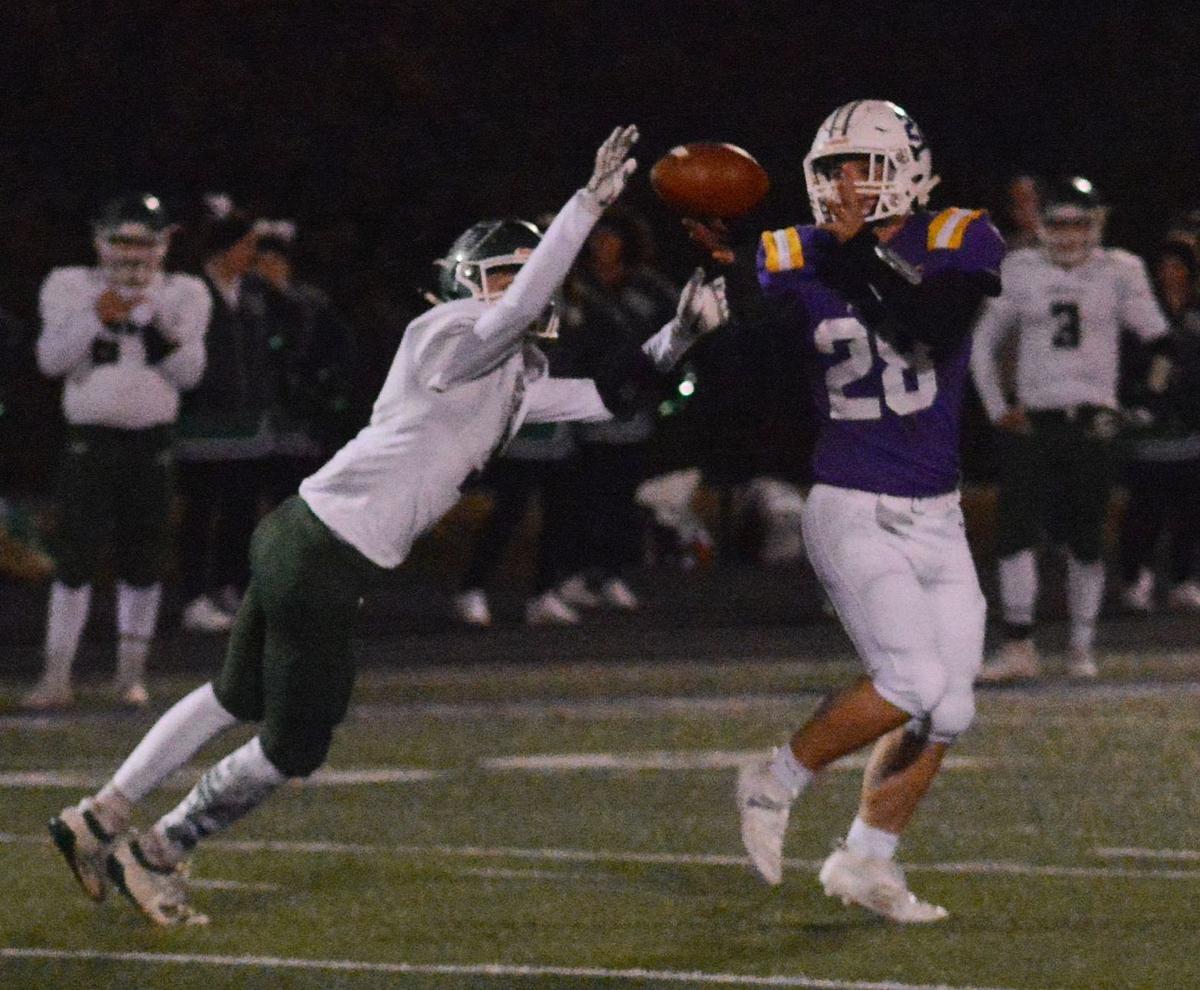 POTOSI – For a football team that rarely attempts passes, Potosi looked strikingly comfortable attacking through the air during an enormous scoring drive just before halftime on Friday night.

The Trojans drove 96 yards in less than a minute, and delivered three big defensive stands inside the red zone to secure a 20-14 victory over Perryville in the Class 3, District 1 playoffs.

Junior quarterback Andrew Coleman threw for a season-high 143 yards on 8-of-13 overall, and scored two rushing touchdowns on a pair of sneaks from 1 yard out.

His lone misstep handed the visiting Pirates some hope, as Dawson Camden returned an interception 33 yards to the Potosi 7 near the midway juncture of the fourth quarter.

Evan Daugherty scored two plays later on a delayed keeper with 5:49 remaining, and the extra point brought Perryville to within six.

Potosi was forced to punt on the ensuing series after personal foul behind the play negated a first down run on second effort by Kyle Miller.

The Pirates operated with three timeouts from their own 32 in hopes of rallying to save their season, and Daugherty moved the chains on a fourth-and-3 stretch across midfield.

But a fourth-and-11 pass fell incomplete after Potosi seniors Hunter Moon and Tristan Murdick made separate tackles for loss in a clinching stop.

Potosi (6-4) earned its third consecutive win by margin of one possession, and will travel to Class 3 fifth-ranked Kennett for the district semifinal round.

Camden angled a punt perfectly out of bounds at the Potosi 4 with about two minutes left in the second quarter, and the Trojans opted against their usual deliberate approach with shining success.

Coleman connected on two deep passes covering 31 and 30 yards to senior Isaac Gaghen, the second of which narrowly eluded the fingertips of a leaping defender along the right sideline.

He then found tight end Devon Marler wide open for a 15-yard touchdown, pushing the Potosi lead to 14-0 with 55 seconds to play in the half.

Perryville (4-6), which dropped a 34-20 decision to the Trojans back in week 3, capped its initial drive of the second half with a powerful 71-yard march that required only seven snaps.

Charlie Ussery provided the key play with a 37-yard burst on a deceptive inside reverse, and Fernando Bojorquez barged in from the 1 to make it 14-7.

Potosi took over from its own 35, and was sparked by an 18-yard from Miller, who made three catches in his return after missing two games due to a concussion.

Brayden Isgriggs emerged through a gaping hole for a 41-yard gain before being pushed out of bounds at the Perryville 2, and Coleman restored a 13-point lead two plays later.

Gaghen finished with 94 yards on four receptions, and Isgriggs added a team-high 58 yards on eight carries. Potosi amassed a 190-101 edge in total yardage during the first half.

Coleman scored on the second play of the second quarter after Gaghen raced 32 yards on a short pass into the flat and Isgriggs powered to a first down on fourth-and-3 from the 15.

The 7-0 advantage was only protected by two forced fumbles as the Pirates threatened. Carter Dix made an outstanding catch while jumping against a defender near the Potosi 8.

But his effort to break away resulted in the football popping loose, and sophomore cornerback Gavin Pinson recovered. Gaghen later pounced on a fumble by Caleb Gremaud at the 10.

Daugherty gained 55 yards on 14 carries, and completed 10-of-16 throws for 69 yards. Ussery was used exclusively after intermission for 65 yards on five rushing attempts.

Perryville stopped the Trojans to begin the third quarter even though Potosi punter Booba Henson scooped a low snap and scrambled 13 yards to pick up the first down.

The Pirates reached the Potosi 14 early in the fourth, but moved backward on a false start penalty before defensive tackle A Mondre Hill and his teammates stuffed a shovel pass near the line of scrimmage.

Potosi defensive linemen Hunter Moon (75) and A Mondre Hill (69) fight through a block to stop Perryville quarterback Evan Daugherty (3) in the backfield during fourth quarter action on Friday night.