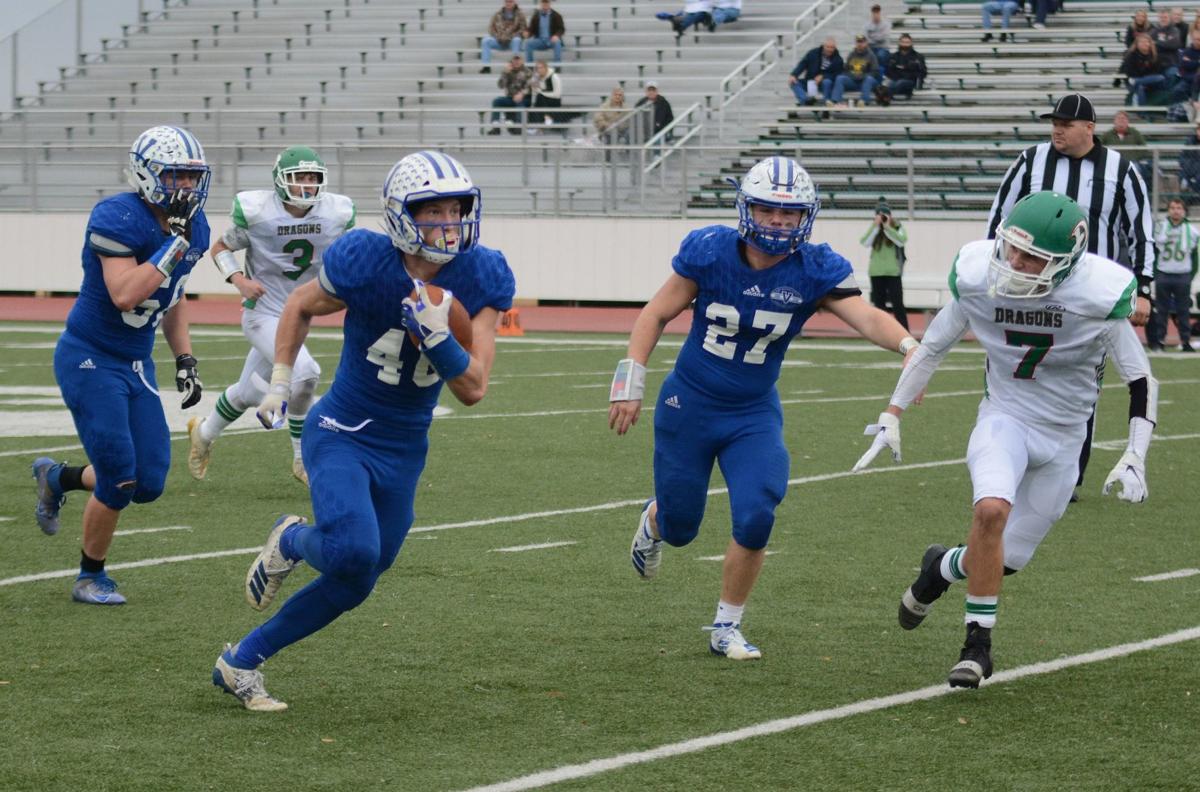 Valle Catholic senior running back Cory Stoll (40) runs past Mid-Buchanan sophomore Rawlins Brant (7) for a 44-yard touchdown after following blocks from Collin Grass (27) and Zach Wolk (left) during the second quarter of a Class 1 state semifinal football game on Saturday. 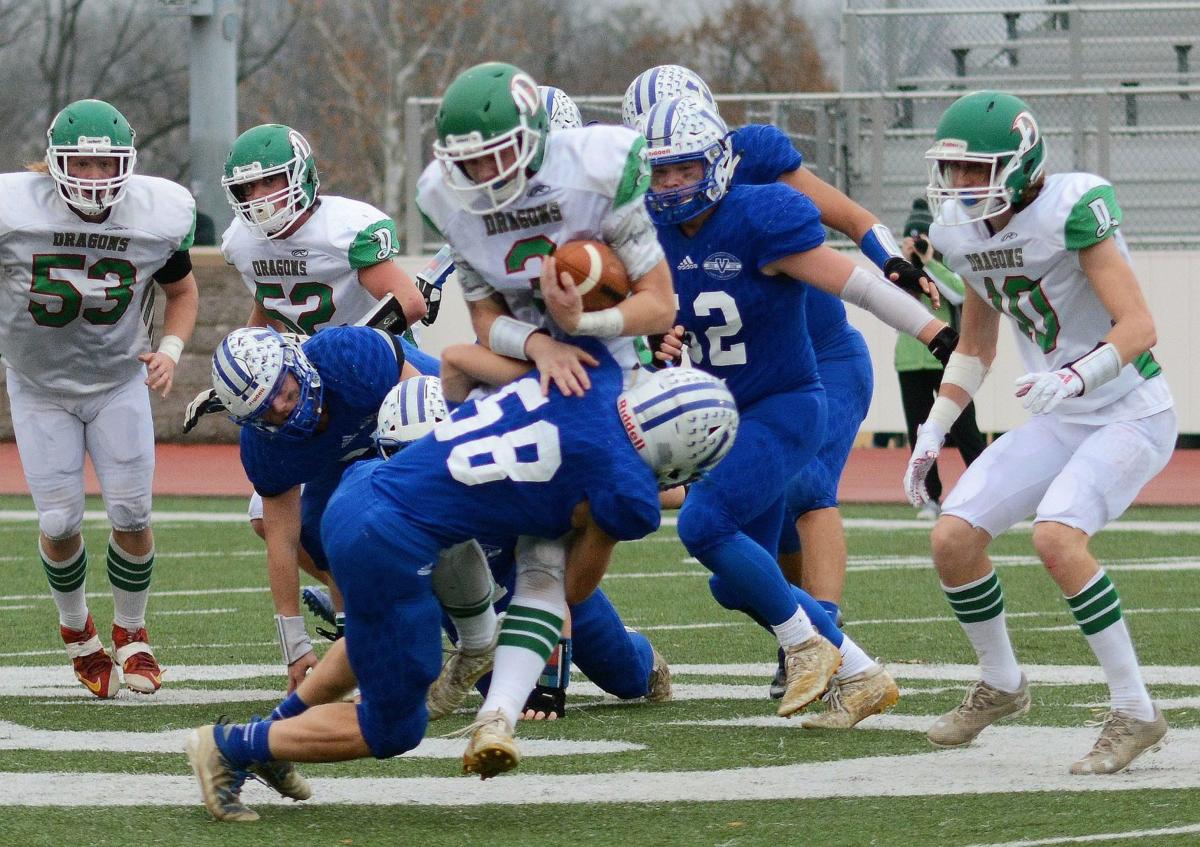 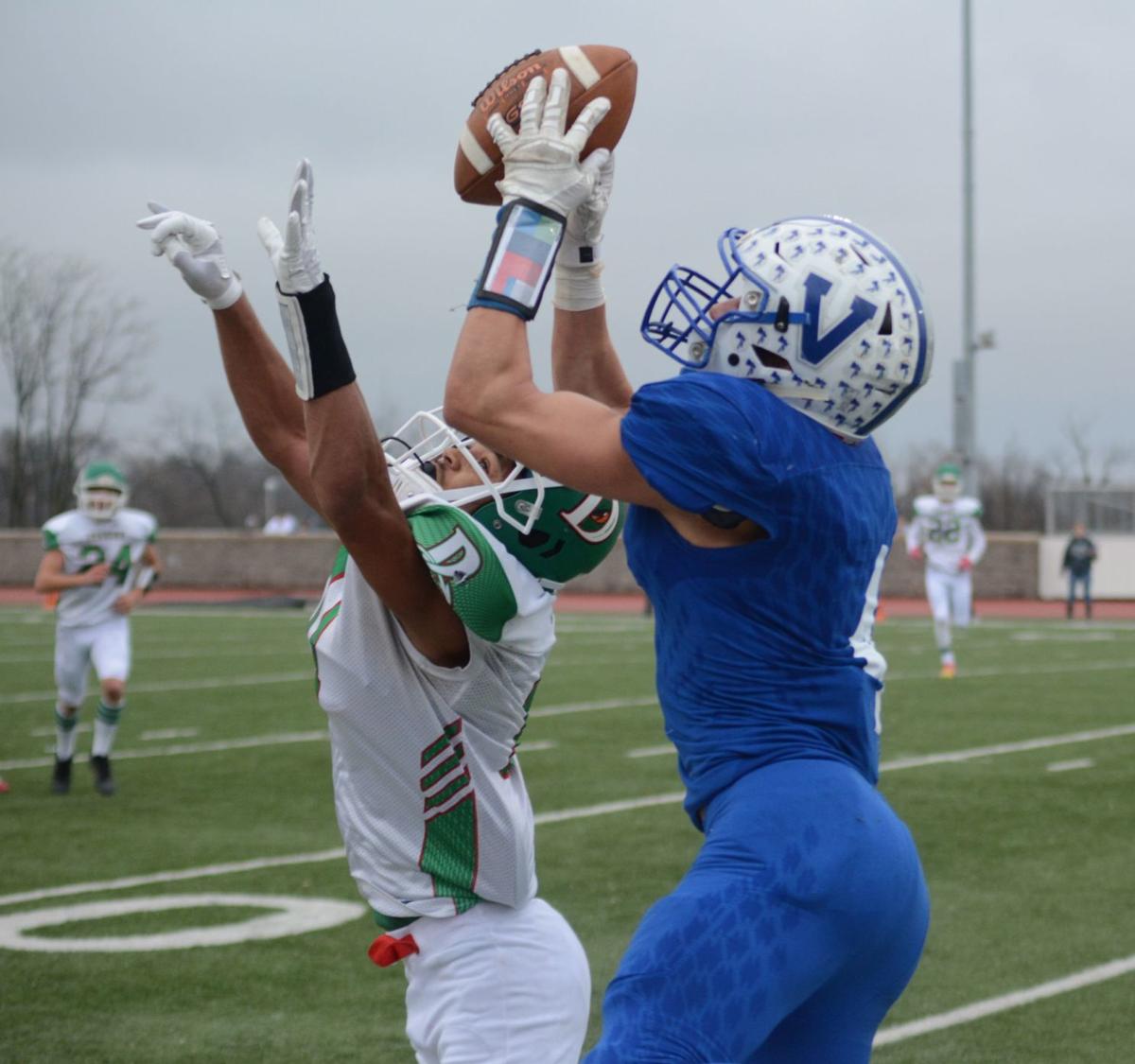 Valle Catholic junior Jayden Gegg catches a pass over Mid-Buchanan defender T.J. Runyan before landing out of bounds during second quarter action of a Class 1 state semifinal game on Saturday. 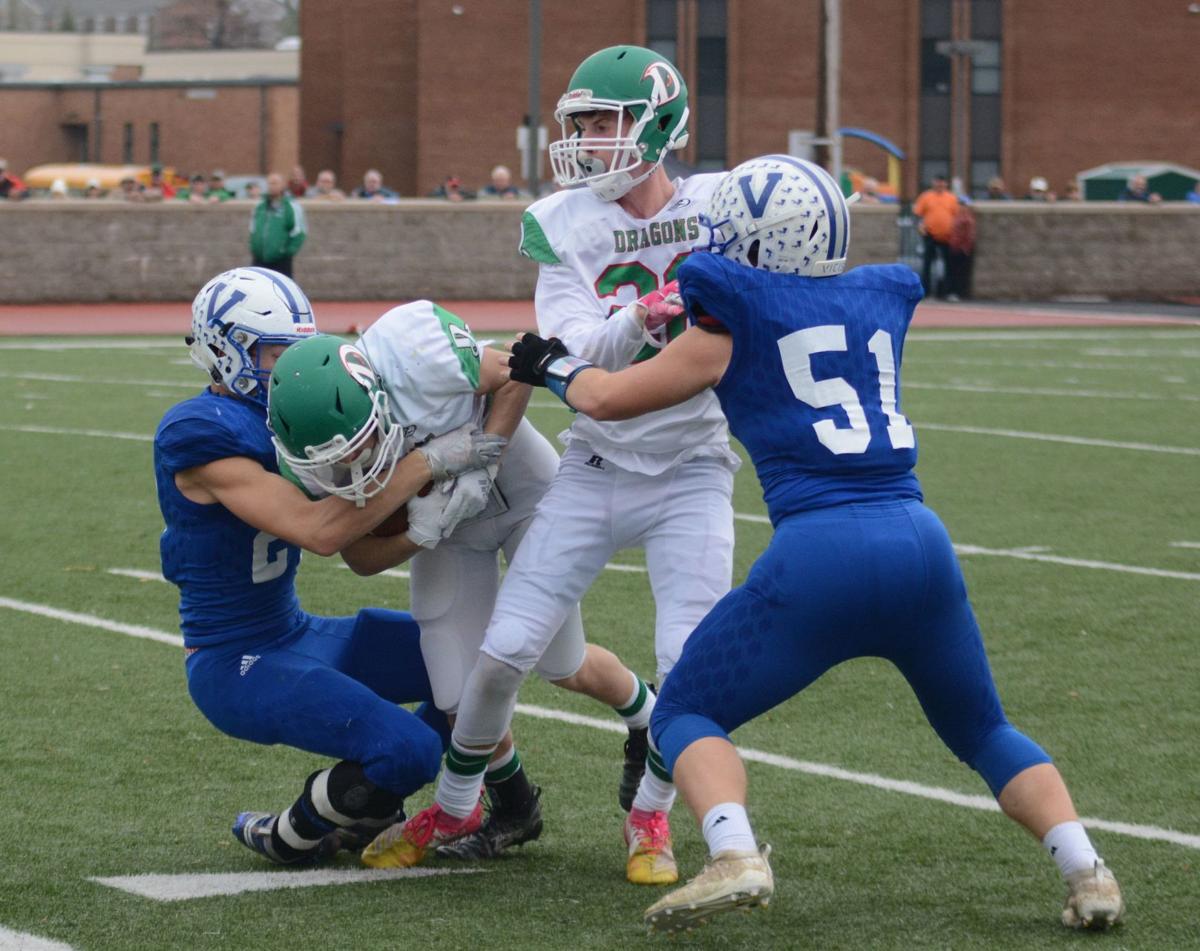 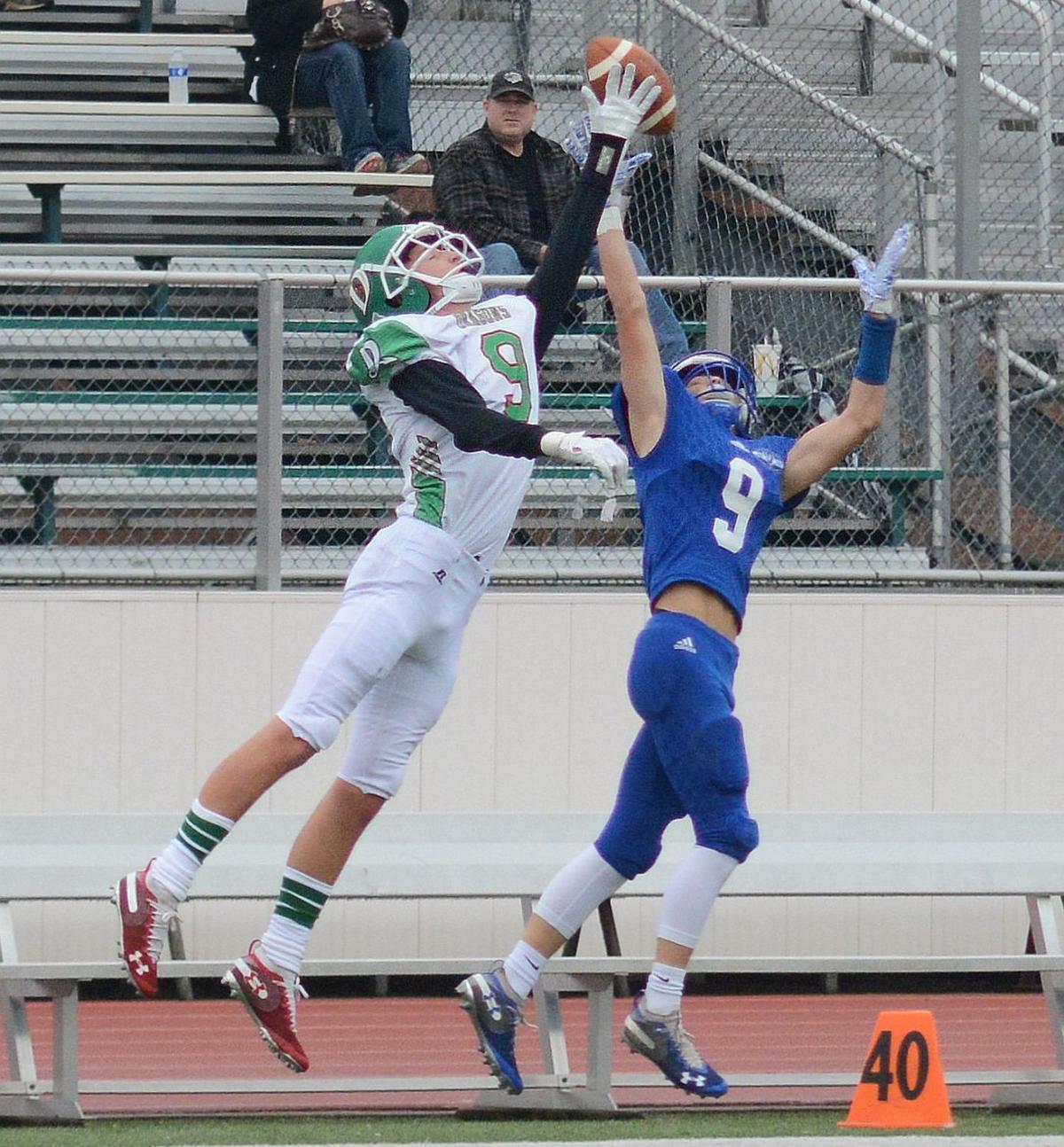 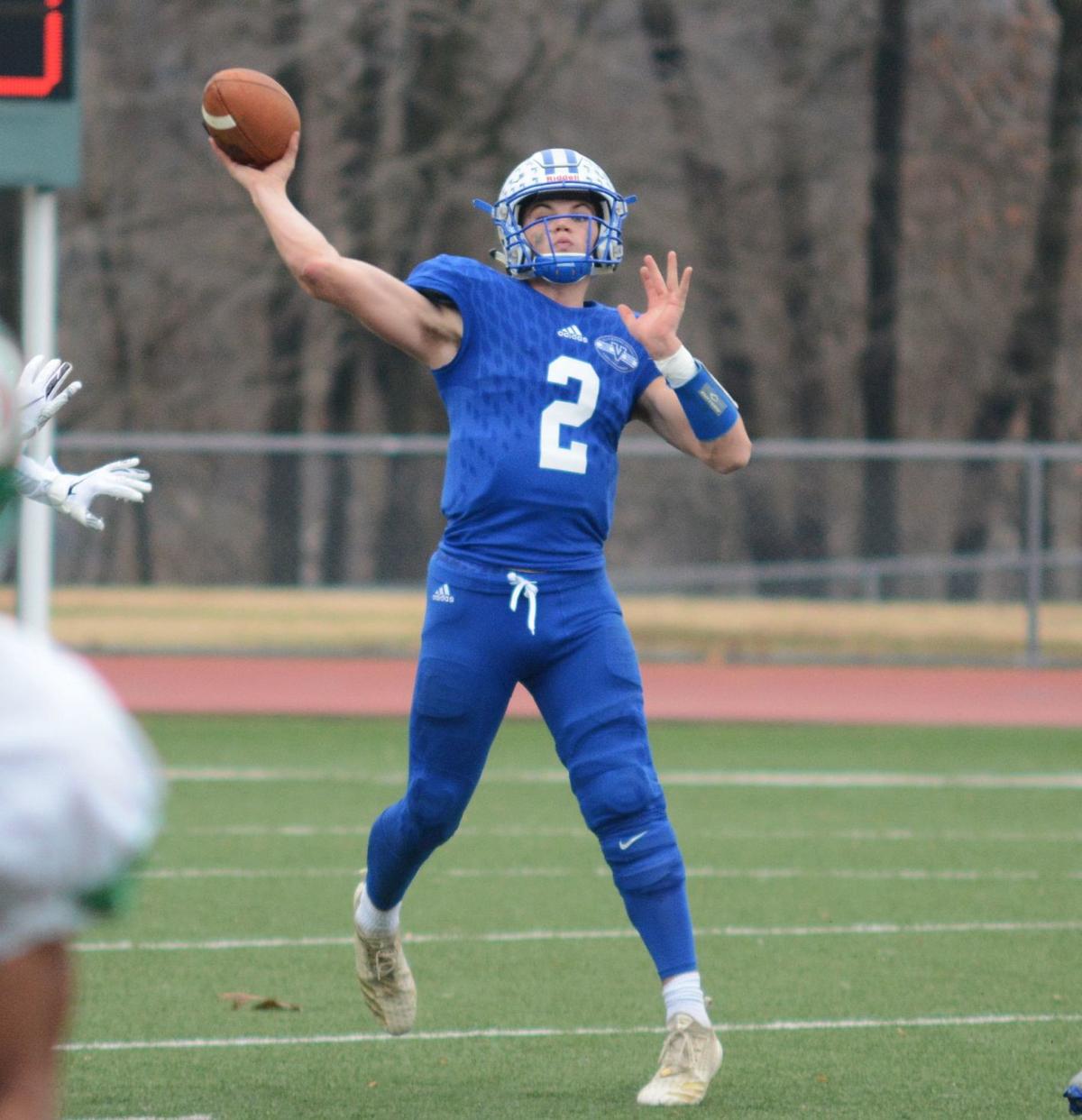 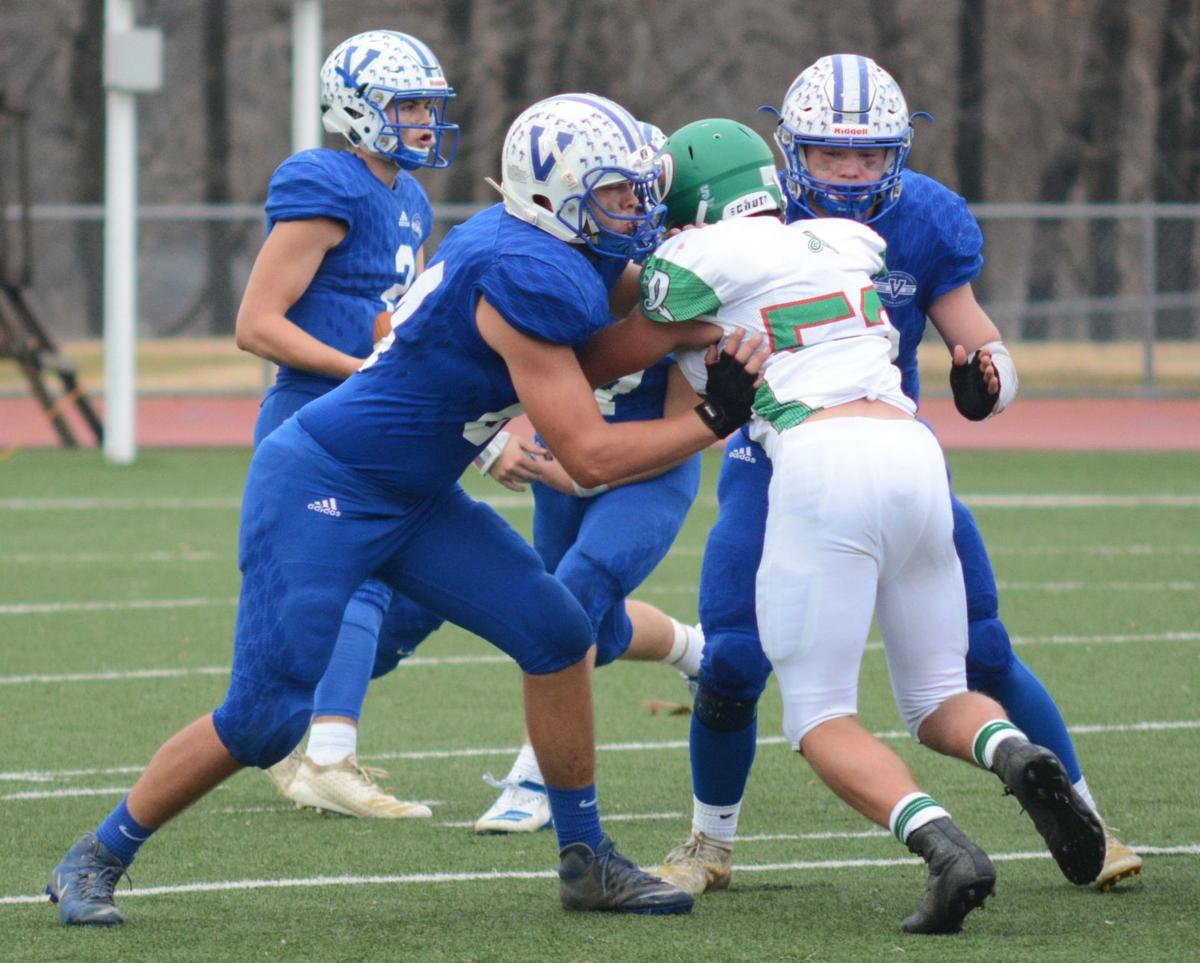 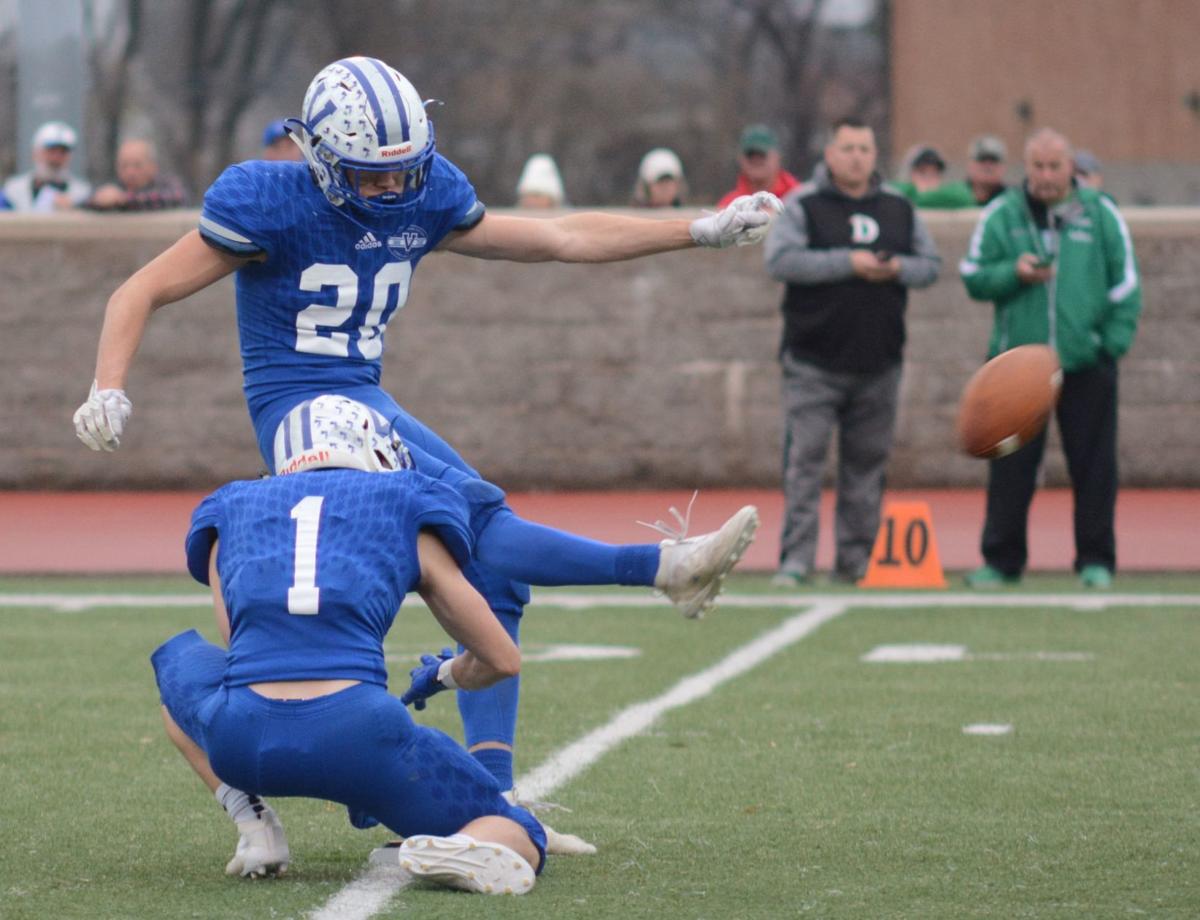 Valle Catholic junior Kolten Naeger (20) kicks a successful extra point from the hold of Owen Viox (1) during the third quarter against Mid-Buchanan in a Class 1 state semifinal game on Saturday.

Valle Catholic senior running back Cory Stoll (40) runs past Mid-Buchanan sophomore Rawlins Brant (7) for a 44-yard touchdown after following blocks from Collin Grass (27) and Zach Wolk (left) during the second quarter of a Class 1 state semifinal football game on Saturday.

Valle Catholic junior Jayden Gegg catches a pass over Mid-Buchanan defender T.J. Runyan before landing out of bounds during second quarter action of a Class 1 state semifinal game on Saturday.

Valle Catholic junior Kolten Naeger (20) kicks a successful extra point from the hold of Owen Viox (1) during the third quarter against Mid-Buchanan in a Class 1 state semifinal game on Saturday.

STE. GENEVIEVE – The emotional and physical toll of a grueling football season was etched on the face of Valle Catholic senior running back Cory Stoll once the final whistle sounded and handshakes were exchanged.

Banged-up, battle-tested and perhaps overlooked, the Warriors delivered a dominant performance on Saturday afternoon to move within one playoff step of reaching their ultimate goal.

“What fuels me is knowing that people are looking down upon us and don’t give us the recognition we deserve,” Stoll said. “We try to prove it every chance we get.”

Stoll rushed for 152 yards on 15 carries, and scored twice on long touchdown runs in the second quarter as Valle Catholic ousted Mid-Buchanan 37-14 in a Class 1 state semifinal game.

Senior quarterback Chase Dunlap accounted for two more scores, and the Warriors compiled 28 points during an 11-minute span against a Mid-Buchanan defense that posted five shutouts this fall.

Valle Catholic (13-1) earned its 11th straight victory, and will pursue the 15th state championship of its storied history when facing Lincoln (14-0) next Saturday at Faurot Field in Columbia, Mo.

Lincoln downed Marceline 46-20, and has been ranked No. 1 in the Class 1 media poll each week since the preseason. The Warriors have now beaten three top-five opponents in as many games.

“We were able to run through some tackles and turn some 5-yard gains into big plays,” Valle Catholic head coach Judd Naeger said. “Last week, we felt like we were close in the run game, and may have abandoned it a little at times.

“Cory ran really hard, Collin ran hard and Jayden gave us some tough yards. We have different guys who can carry the football and different guys we can throw it to. We were balanced and it ended up being really good.”

The contest was shifted to the more suitable artificial turf at nearby Ste. Genevieve High School instead of the muddy surface created by recent soaking rain at Fr. John Dempsey Field.

After allowing no first downs through six defensive series last week against Thayer, the smothering Valle Catholic defense yielded only two during the first half to Mid-Buchanan.

The Dragons looked to establish a rhythm using short screens, but Inside linebacker Collin Grass batted away two early throws and intercepted another at a pivotal juncture.

Stoll needed just a single cut through the middle one play after the pick to gallop 55 yards for his first touchdown of the day, spotting the Warriors a 16-0 advantage.

“I knew we had to be looking for people coming across. That was part of our game plan,” Grass said. “We had to play better today. We didn’t want this game to be as close as last week.”

The Warriors remained relentless on defense. Austin Burnett overcame a block to tackle a receiver for negative yardage, and Kolten Naeger forced quarterback Javan Noyes out of bounds for a sack.

Mid-Buchanan (12-2) punted moments later, and Stoll emerged through a hole up the middle before bouncing outside for a 44-yard scoring run and 23-0 margin.

“With the defense they were in, we knew we could get the run game going,” Stoll said. “It was a matter of getting certain people blocked. Once that happened, there were holes everywhere.”

Following another three-and-out, Owen Viox adjusted to an underthrown ball for a 25-yard catch, then slipped behind the secondary on a 31-yard touchdown strike from Dunlap before halftime.

Dunlap uncorked 37 passes last week in a narrow 15-14 escape against Thayer, but attempted less than half of that number this time as the Warriors established a consistent ground game.

Grass finished with 81 yards on 16 carries, and made a huge 38-yard catch that enabled Dunlap to score on a keeper from the 3 on the second play of the second quarter.

Dunlap was 13-of-19 overall for 212 yards while competing with an injured knee, and threw comfortably from the pocket without being sacked or knocked down.

“I think it was pretty important to get all of our backs involved, and gain some big plays on runs so Chase wouldn’t have so much work placed on him,” senior center and defensive tackle Kyle Roth said.

Frustration increased for the Dragons – who traveled more than five hours and 330 miles from Bethany, Mo. – during a wasted scoring opportunity early in the third quarter.

Defensive lineman Creed Webster recovered a Valle fumble, and Mid-Buchanan lined up in a modified swinging gate formation from the Warriors’ 17.

The trick play backfired when an errant snap resulted in a 30-yard loss and subsequent punt, and the visitors were soon looking a temporary running clock.

Grass picked up 19 yards over the next two plays, and Viox moved the chains with a 20-yard catch on third-and-11 after a holding penalty wiped out a potential score.

Mid-Buchanan was flagged for a helmet-to-helmet blow that rattled Stoll, and Jayden Gegg increased the 30-0 lead with a 1-yard touchdown run following an unsportsmanlike conduct call.

“You just have to play smash-mouth football,” Roth said. “We wanted to leave no doubt, and show that we’re ready to go to state. I think we did that.”

Peyton Tucker made 17 combined tackles – including nine solo – while Grass and Burnett added 11 stops each for Valle. Cody Basler added a sack.

Noyes completed 11-of-22 passes for 126 yards, including five connections with junior T.J. Runyan, and helped the Dragons break the shutout.

Noyes scored on a 2-yard keeper and added the two-point conversion at 37-8 with 2:41 left in the third quarter after Drew Russell made a tremendous 36-yard catch through interference.

Valle went three-and-out on the next series, and Mid-Buchanan capitalized off a short punt when Runyan made a leaping 45-yard touchdown grab with 11:23 remaining. Noyes eluded pressure from Roth on the play when obvious holding in the backfield was not called.

The Warriors were able to burn nearly six minutes while protecting the lead. Drew Bauman had the key play of that drive, securing a bobbled nine-yard reception while rolling to his back on third down.

Viox paced the Valle Catholic receivers with four catches for 83 yards, and Bauman sealed the outcome with a late interception – his sixth of the season – for the second straight game.

In another strange parallel to the quarterfinal round, Valle Catholic obtained its first points on a safety. A high snap bounced through the end zone on the second play from scrimmage.

Mid-Buchanan avoided compounding that mistake as linebacker Christian Scaggs broke up a dangerous, fourth-down throw intended for Aiden Heberlie near the goal line.

The Dragons were limited to 81 rushing yards for the game. Lane Ellison accounted for 33 on a motion sweep on their second possession.

Could you pass a US civics test?