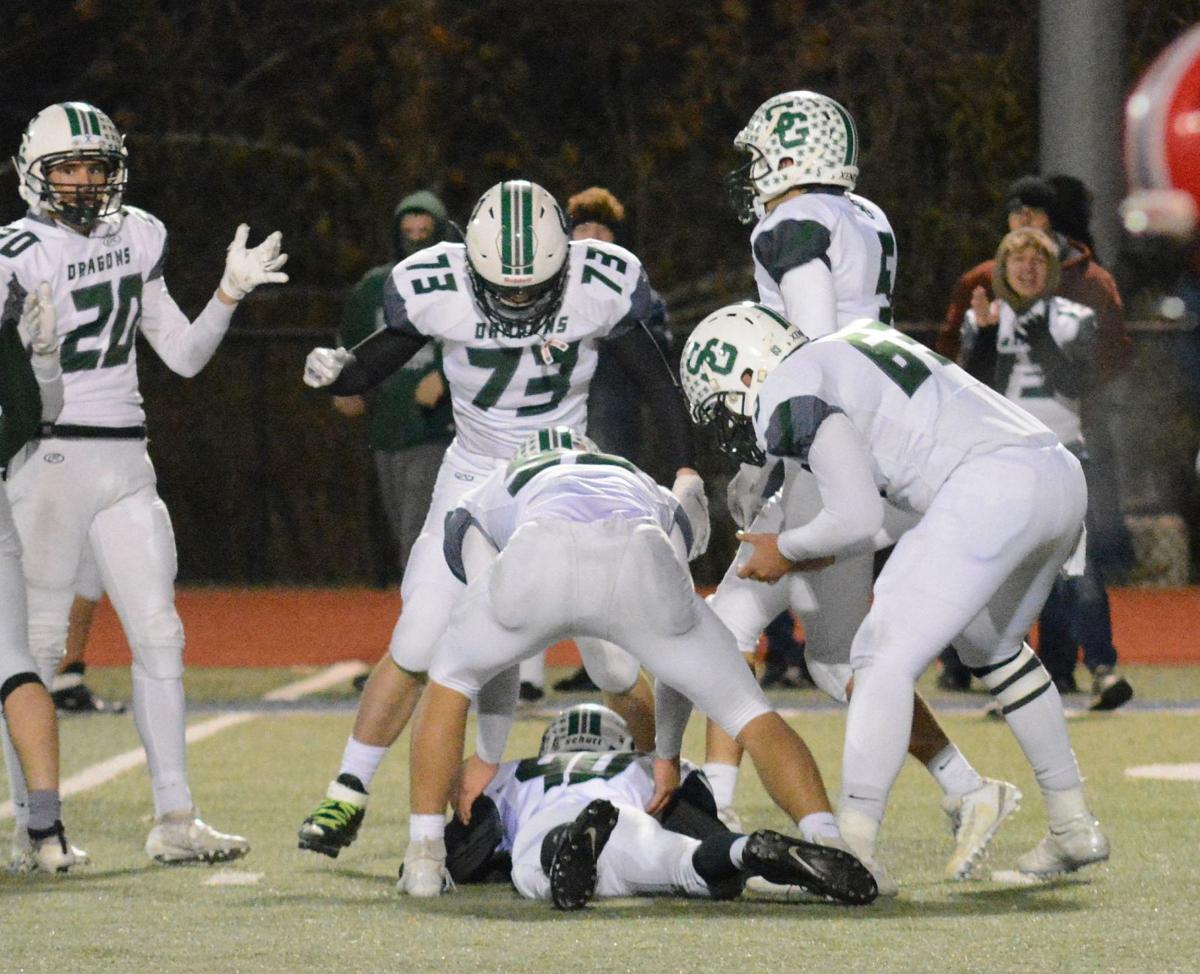 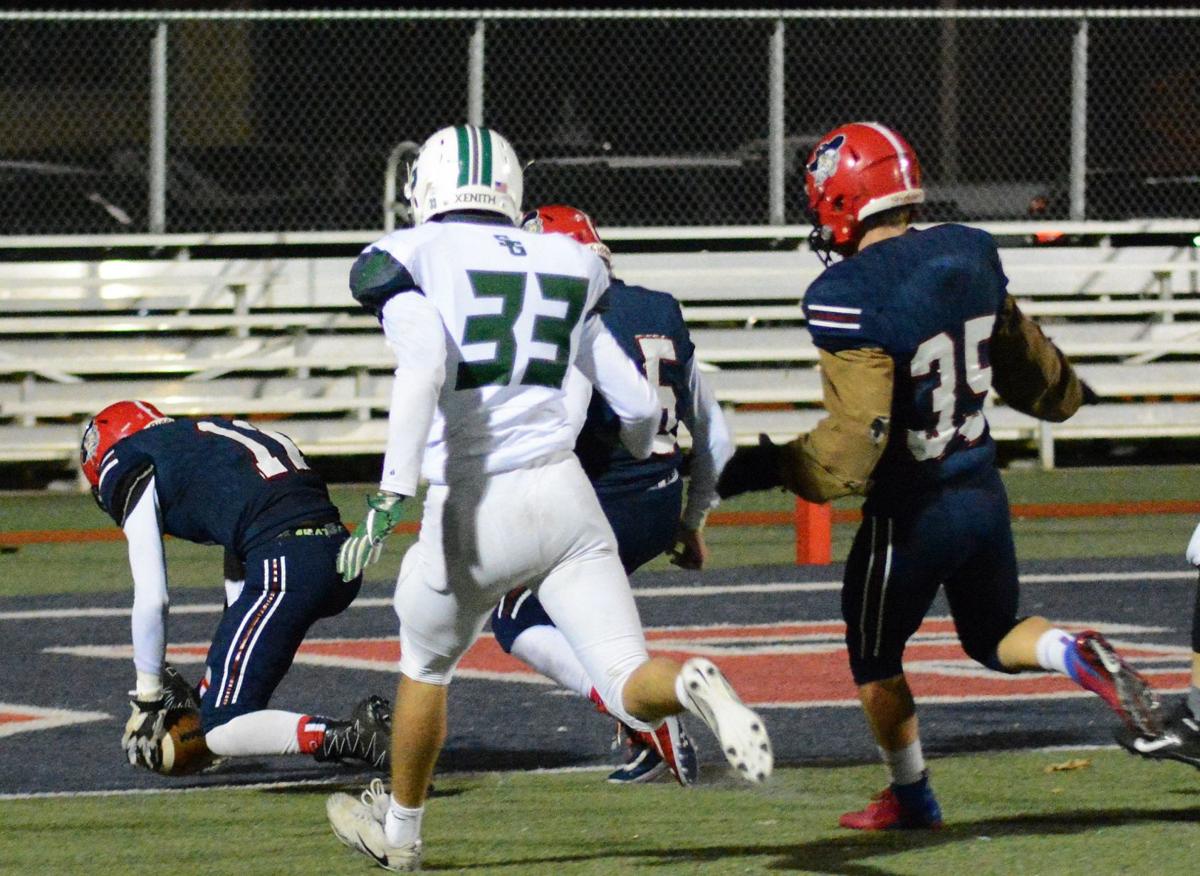 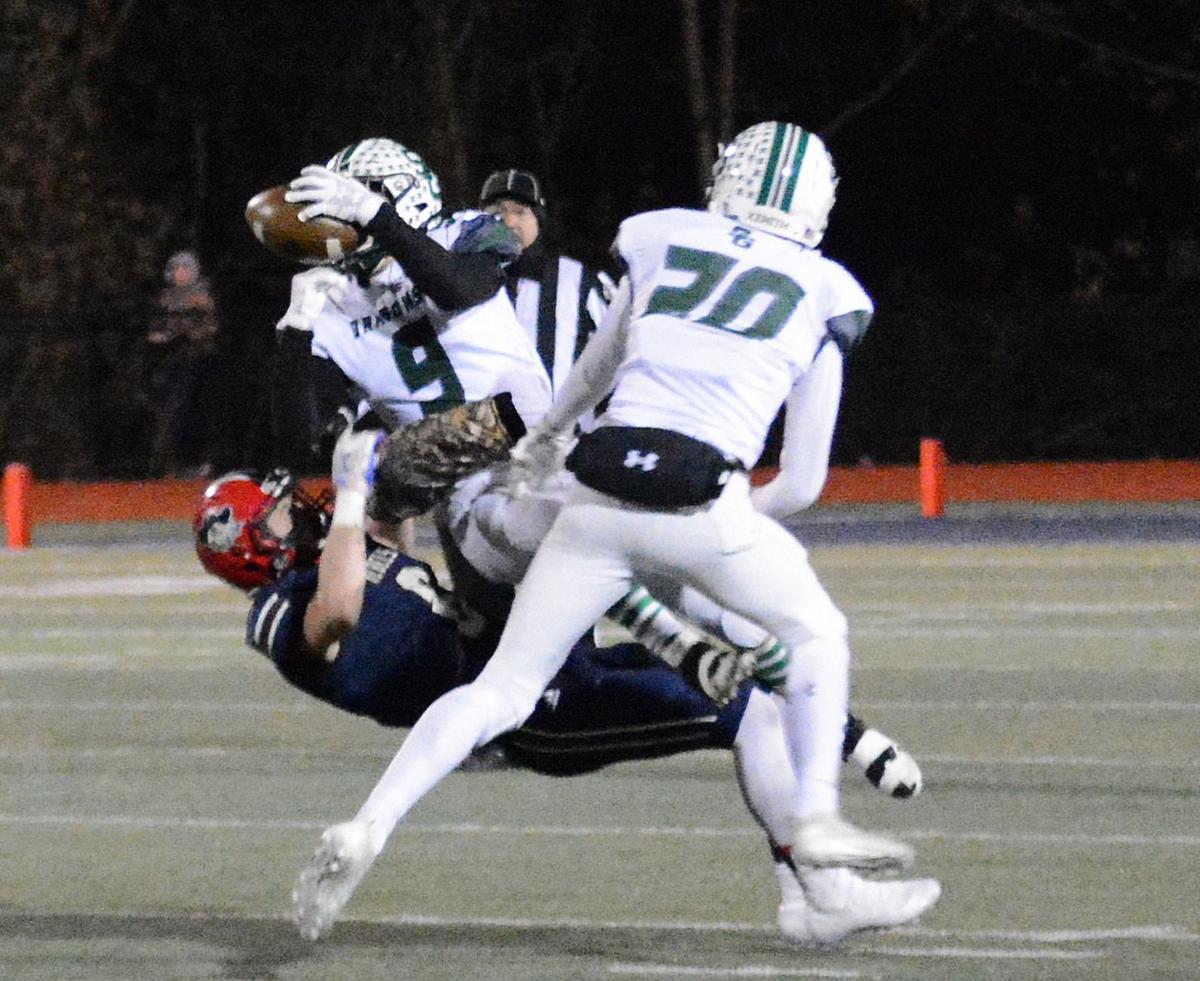 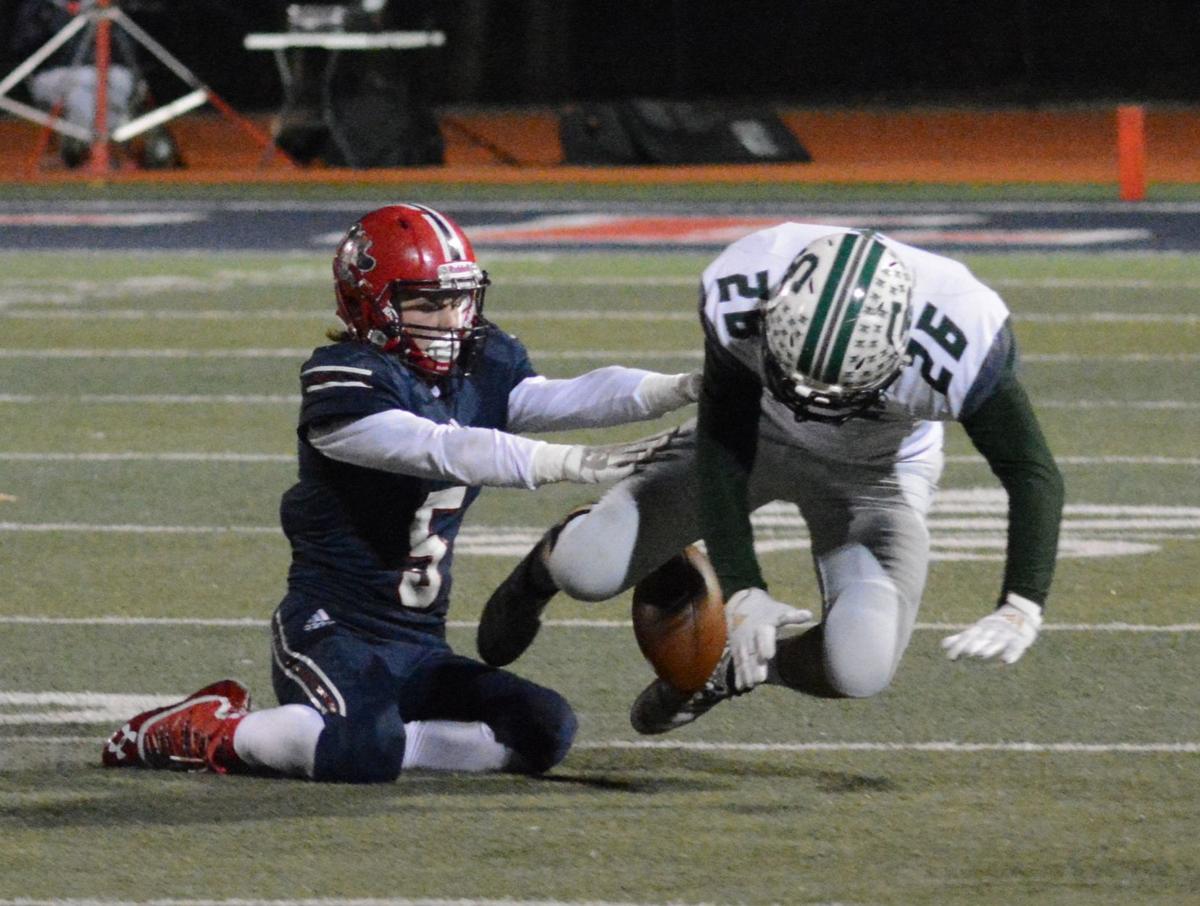 Central senior linebacker Gage Manion (5) shoves Ste. Genevieve running back Austin Bullock (26) away from the football after Bullock fumbled during third quarter action in a Class 3, District 1 playoff game on Friday night. Ste. Genevieve retained possession when the ball rolled out of bounds. 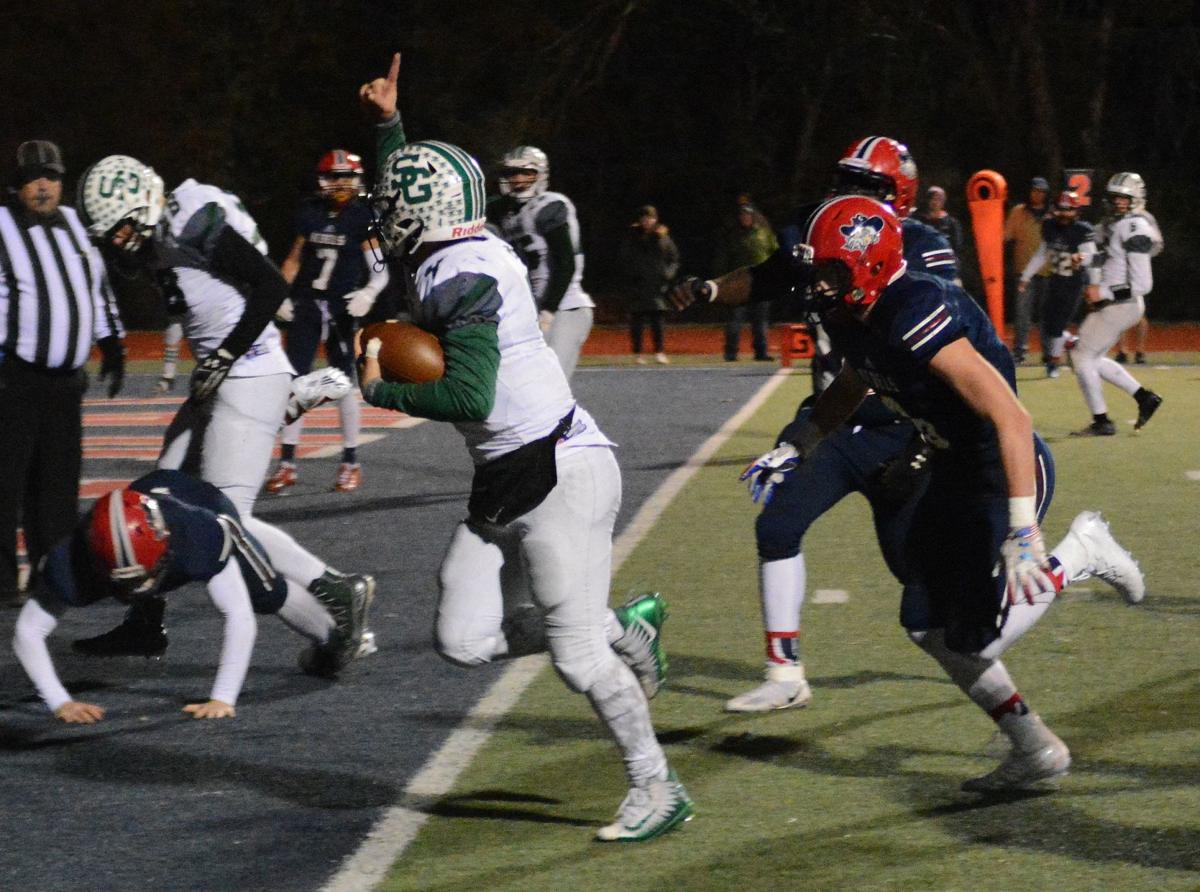 Ste. Genevieve quarterback Logan Gegg scores a touchdown on a 4-yard keeper during third quarter action against Central in a Class 3, District 1 playoff game on Friday night in Park Hills. 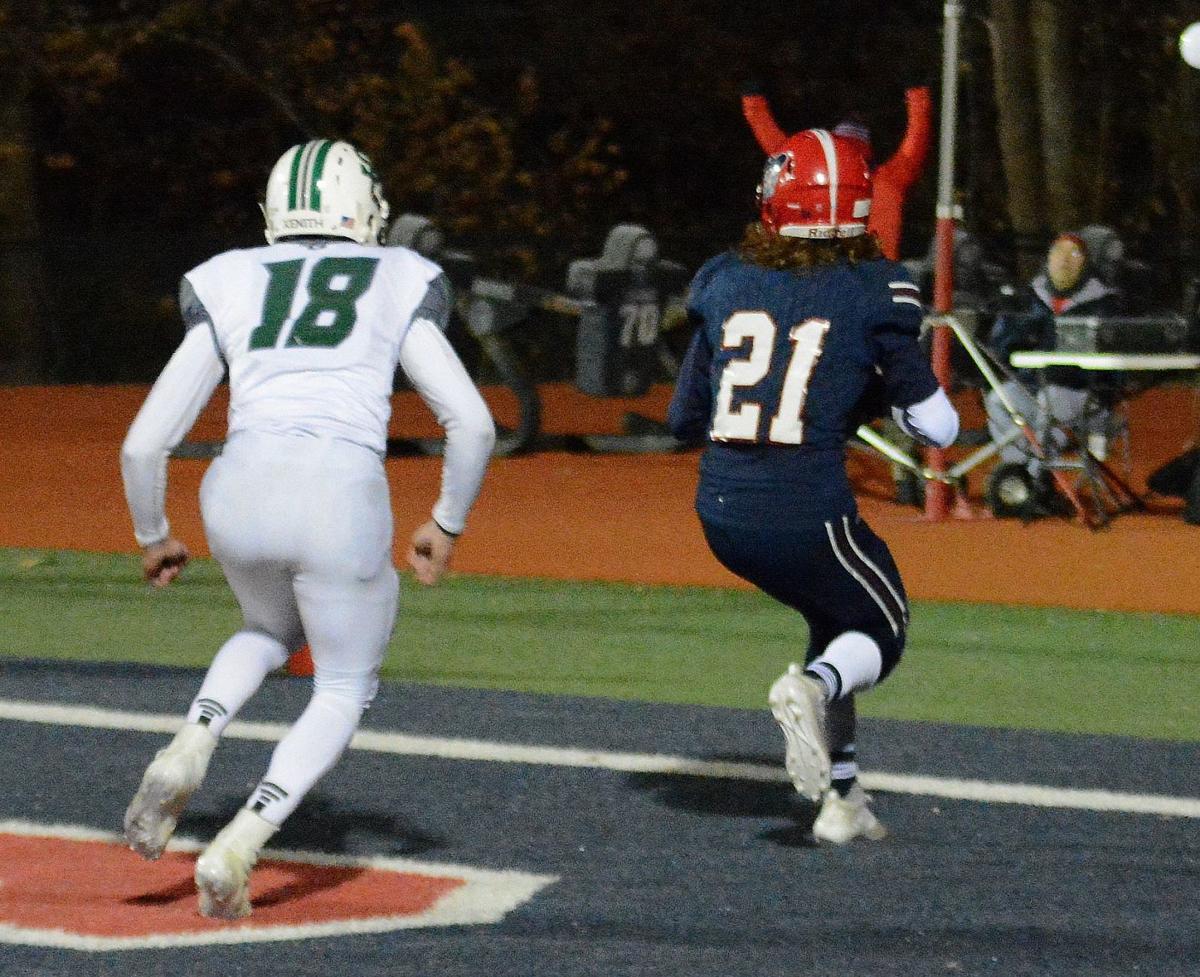 Central senior linebacker Gage Manion (5) shoves Ste. Genevieve running back Austin Bullock (26) away from the football after Bullock fumbled during third quarter action in a Class 3, District 1 playoff game on Friday night. Ste. Genevieve retained possession when the ball rolled out of bounds.

Ste. Genevieve quarterback Logan Gegg scores a touchdown on a 4-yard keeper during third quarter action against Central in a Class 3, District 1 playoff game on Friday night in Park Hills.

PARK HILLS – After coughing up a two-touchdown lead and having another potential score ripped away, Ste. Genevieve gambled its football season on the right foot of an exchange student from Brazil.

Mateus Lacerda kicked a 31-yard field goal that nearly scraped the crossbar with 12.5 seconds to play, and the Dragons defeated Central 24-22 in a Class 3, District 1 semifinal playoff on Friday night.

It was not only a clutch kick for Lacerda, but also a moment of redemption. A shanked extra point in the third quarter would have oroven costly if not for his game-winner.

Central (7-4) struggled all night to establish its rushing attack, but was gifted the lead on a special teams gaffe with 8:12 remaining in the fourth quarter.

Freshman Kaden Flye reached up and deflected a punt that was over his head. The ball caromed into the end zone where Rebels senior Isaiah recovered for a touchdown.

Justin Bridges put Central ahead 22-21 on the extra point, and a stellar defensive play by senior Braydon Scherffius further fired up the home team on a frigid night.

Ste. Genevieve executed a perfect reverse from its own 20, and Zach Boyer raced 68 yards down the right sideline before Scherffius tracked him down and tore the ball away for a massive turnover.

The Rebels could have perhaps run the clock out with three first downs after getting a key stop, but instead went three-and-out, and a short punt was downed at the Central 40.

Dragons quarterback Logan Gegg flipped a season-saving pass to Bryce Trollinger in the flat to convert on fourth-and-4, and added a 7-yard run that was compounded by a facemask penalty.

Gegg slid down near the Central 14 before Ste. Genevieve burned its last timeout, and Lacerda flopped to his stomach in gratitude after watching his kick sneak through.

Central gave itself a final opportunity for a miracle on an untimed down after a successful 16-yard hook and lateral was parlayed with a roughing-the-passer penalty.

But quarterback Dylan Corcoran was immediately forced from the pocket and eventually sacked by linebacker Koby Hatfield as the Dragons stormed the field in celebration.

Gegg finished 8-of-12 passing for 124 yards, and netted 91 rushing yards on 27 carries. His 4-yard keeper extended a 15-8 lead midway through the third quarter.

The Dragons had stalled after Jacob Boyer recovered a misplayed onside kick out of intermission, but finished their next possession in the end zone with help of pass interference on fourth-and-11.

Gage Manion had a team-high 50 rushing yards for Central, but Ste. Genevieve contained Dayshawn Welch to a season-low 45 while Corcoran completed 4-of-9 throws for 54 yards.

Welch ended his breakout sophomore season with nine games of 100-plus yards on the ground. Ste. Genevieve was responsible for both double-figure outings.

Defensive ends Evan Walker and Clayton Kreitler were crucial in keeping Central confined between the tackles, and Trollinger made an interception on the Rebels’ first snap of the third quarter.

But Central answered the Gegg TD with a crucial scoring drive. Manion surged ahead for a key 14-yard run that moved the Rebels into Ste. Genevieve territory.

Walker made a key stop in the backfield, and Blake Bolin dropped an accurate throw by Corcoran in the end zone, placing Central in a fourth-and-long situation from the 18.

Scherffius rescued the drive, however, by beating his defender on a deep slant and catching a scoring strike from Manion on a halfback pass, cutting the deficit to 21-15 with 36 seconds left in the third quarter.

After both offenses were quiet during their opening series, Ste. Genevieve drove 88 yards in just eight plays, capped by a 51-yard touchdown pass from Gegg to Zach Boyer.

Central answered promptly with another big connected on fourth-and-9, as Bolin leaped to catch a 40-yard pass just shy of the goal line.

Manion scored from there out of the wildcat formation, and added the ensuing two-point conversion after Ste. Genevieve jumped offside for an 8-7 lead.

The Dragons matched the fourth-down magic on their next drive as tight end Jesse Kemper elevated over double coverage to bring down a 32-yard score after Gegg had been sacked by Jason Pyatt.

Central threatened before halftime, eventually reaching the Ste. Genevieve 13. But a holding penalty and Walker sack pushed the Rebels out of field-goal range.

Rebels defensive lineman Nate Gremminger forced a fumble that Manion recovered near midfield early in the fourth quarter. Derontae Martin batted down a screen pass while blitzing in the second.

SAVE on your first 3 months! Join today

Which 'Peanuts' character are you?