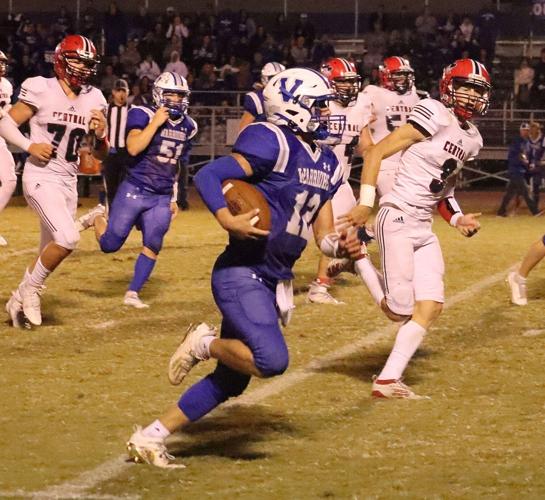 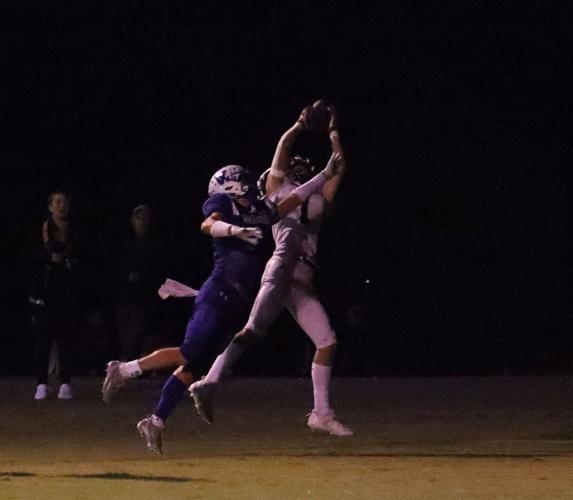 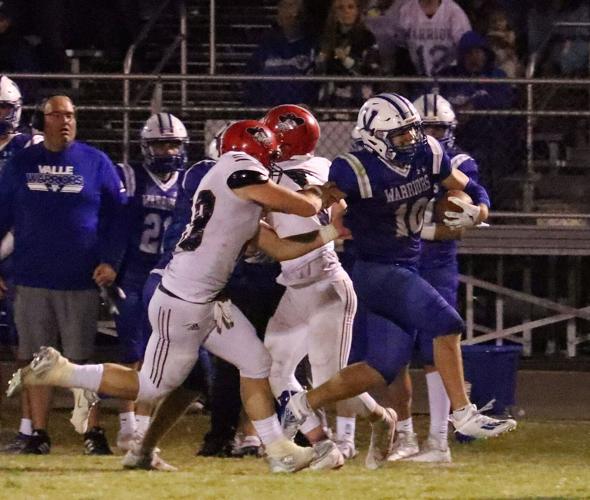 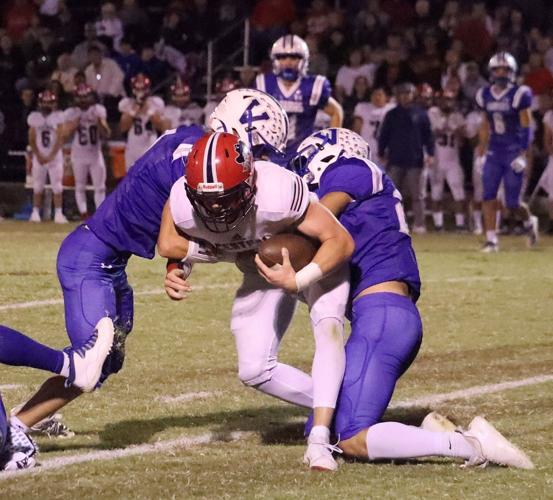 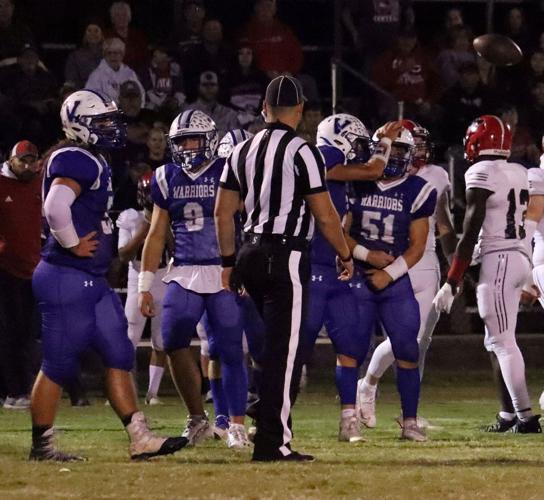 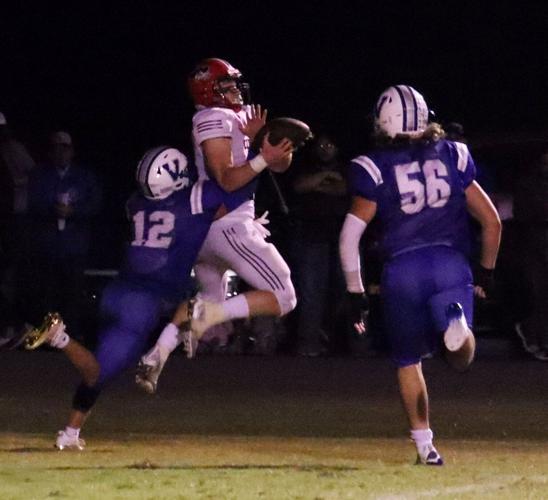 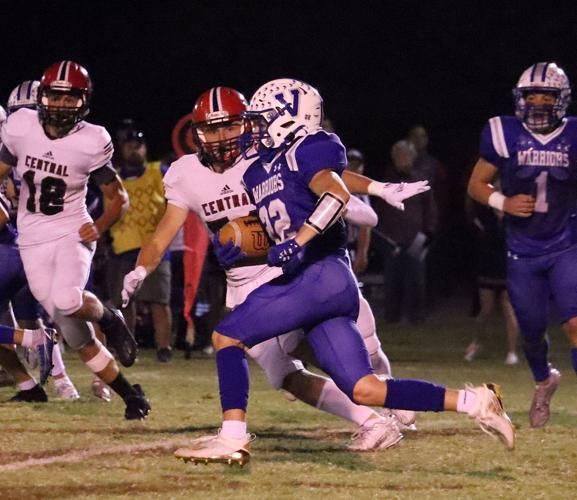 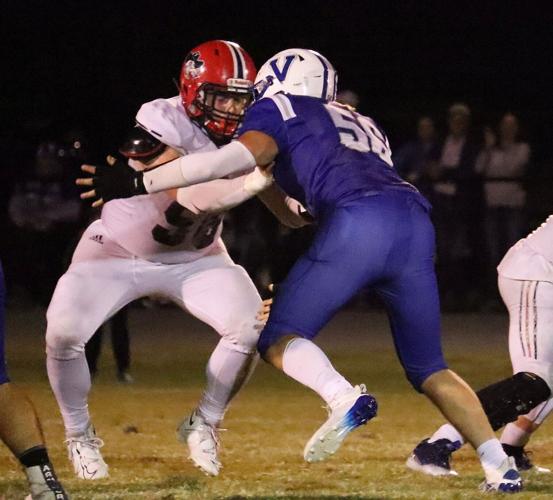 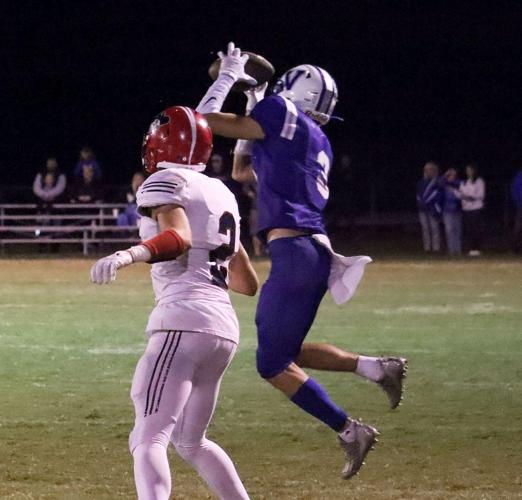 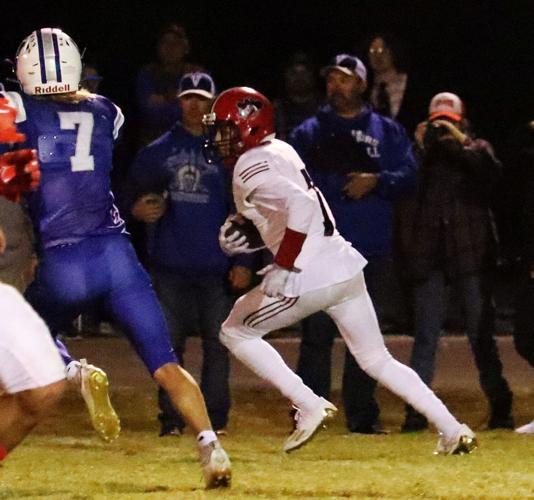 Central receiver Caden Casey runs down the sideline with a 22-yard catch during fourth quarter action against Valle Catholic on Friday night in Ste. Genevieve. 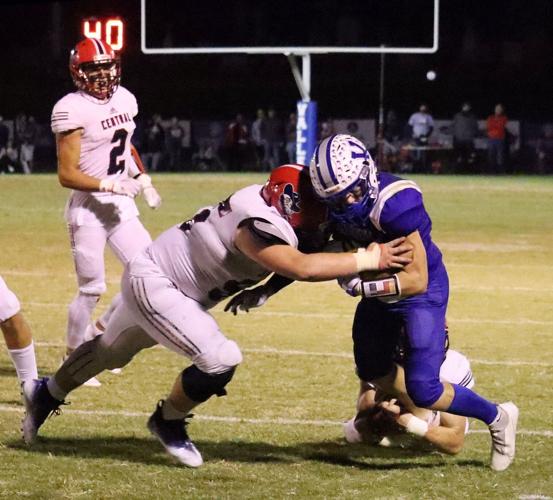 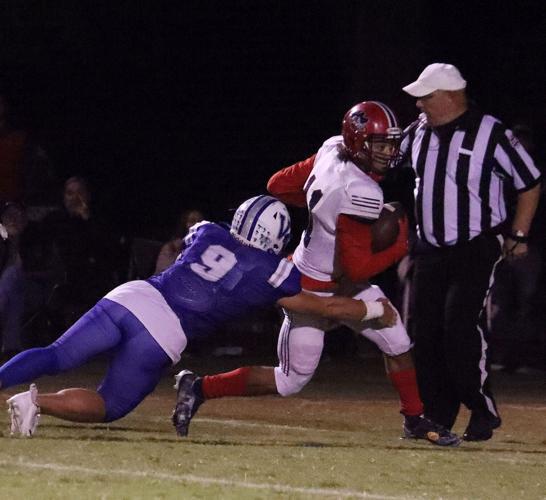 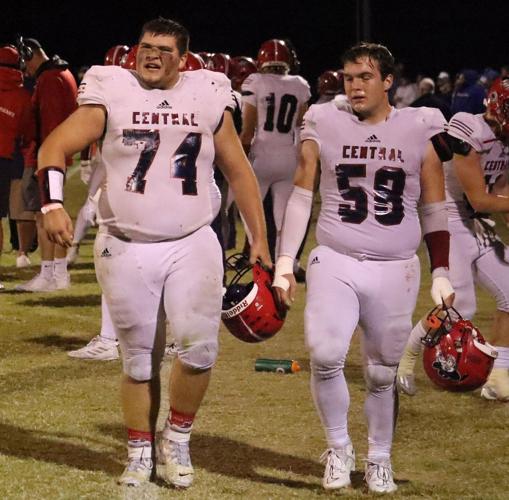 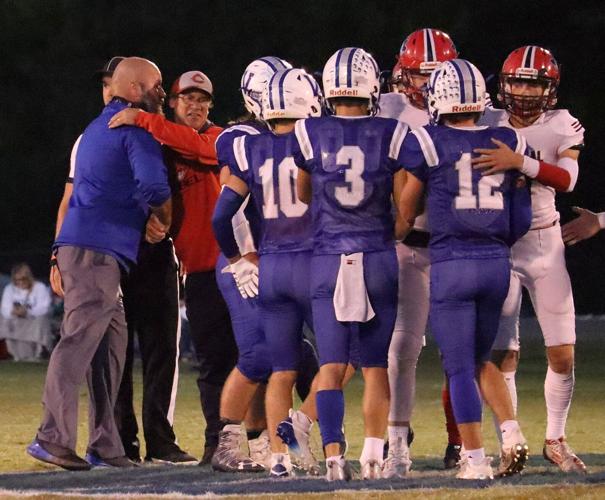 Bryce Giesler scored the go-ahead and clinching touchdowns after the Warriors obtained two crucial defensive stops in the fourth quarter to secure an entertaining 40-30 victory.

Valle Catholic (6-0, 3-0), a newcomer to the MAFC White Division, was saddled with three turnovers and costly penalties during the first half, and trailed the visiting Rebels by two scores with nine minutes left.

The Warriors were limited to 78 rushing yards prior to intermission, but easily eclipsed that total on two crucial plays that shifted and sealed the outcome down the stretch.

Senior quarterback Chase Fallert broke a tackle in the second level before racing toward the right pylon for a 36-yard touchdown, just three plays after Central (5-1, 2-1) had established a 30-21 advantage.

The Valle defense followed with a three-and-out series, and Giesler promptly plowed ahead for 26 yards on a sweep before putting his team in front 34-30 on a 13-yard run with 4:25 remaining.

The ensuing kickoff raised controversy when the side judge saw the ball skip out of bounds and threw a flag, only to be disputed and ultimately overruled by the back judge from much farther away.

The play was surprisingly ruled a touchback following a lengthy discussion involving the referee, and Central was forced to operate from its own 20 instead of the usual 35.

The Rebels crossed midfield after Caden Casey caught a 27-yard pass down the right sideline, and faced fourth-and-1 from just inside the Valle 45.

Rather than lining up in a stacked I formation, which worked in two previous short-yardage situations, Central opted for the familiar spread with no lead blocker. Linebacker Carson Tucker emerged through a gap, and linemen Jacob Calbreath and Isaac Viox assisted in stopping star Jobe Bryant for no gain.

Giesler delivered the closing dagger two plays later with a 58-yard burst through a massive hole, and Sam Drury intercepted a Murphy pass for insurance.

The game doubled as the potential preview of a district final matchup in six weeks, should both squads avoid upsets in the interim. By virtue of the victory, the Warriors essentially locked up the No. 1 seed and home field.

Giesler netted 201 yards on 18 carries. Fallert kept the ball 20 times for 134 yards and three touchdowns while completing 6-of-11 passes for 79 yards.

Stout defense ruled the first half with physical lines and athletic secondary play winning most battles, resulting in a 7-7 tie at intermission.

Kannon Harlow made a leaping 13-yard touchdown catch against tight coverage, and Bryant ran for the two-point conversion and a 15-7 lead after the Warriors jumped offside.

Central needed only 18 seconds to regain the lead. Harlow followed right tackle Triston Stewart on a sweep, and sprinted past a crushing edge block by receiver Kendall Horton for a 72-yard touchdown.

The Rebels temporarily flustered Valle with consecutive sacks by Sammy Callaway – his second of the game – and Stewart to force a punt.

But a dangerous gamble backfired on Central from its own 40 as Tucker snuffed out a fourth-and-3 keeper. The Warriors capitalized on the gifted positive field position.

Giesler and Chase Fallert moved the chains with 11-yard runs, and the quarterback scored from the 1 to get within 21-20 before Rebels lineman Nathan Weinhold blocked the extra point.

Central continued to thrive offensively with another 80-yard drive. Murphy spotted Harlow on a third-and-8 curl route to extend the possession after being sacked by Tim Okenfuss.

Murphy then escaped four bearing defenders in the backfield, and dumped a short pass to Hakin Wagner for another crucial first down before Bryant broke loose for a 35-yard run.

Bryant scored from the 2, and Jaxon Jones made a difficult catch on the two-point conversion, handing Central a nine-point advantage with 9:09 to play.

The Warriors retaliated with 19 unanswered points in a comeback reminiscent of week one, when they scored 34 straight in the fourth to beat Seckman.

Okenfuss notched a team-high 11 tackles, including four for loss, and increased his season sack total to 8 ½ with a couple. Brandon Giesler and Tucker made 10 stops each, and Viox contributed a sack.

Valle Catholic attempted only two passes in the second half after Fallert was flushed from the pocket and intercepted earlier by Bryant and Murphy.

A pair of holding calls wiped out other sizable gains for the Warriors, who lost a fumble at their own 38 that linebacker Ty Schweiss recovered.

Murphy connected with Bryant for 12 yards on a bubble screen, then made it 7-7 on a draw play up the middle midway through the second quarter.

Rylan Fallert returned the ensuing kickoff 55 yards to the Central 36, but a deep pass was broken up in the end zone before Weinhold impeded a fourth-and-4 run.

Murphy, who was 16-of-26 passing for 153 yards, converted a remarkable third-and-20 scramble on the initial Central possession, but Cohen Gibbs recovered a fumble on the next snap.

The Rebels reached the red zone a second time in the opening quarter, but a pass intended for Harlow landed incomplete with defensive back Eli Fallert getting a fingertip on the ball.

Bryant amassed 121 yards on 15 carries plus 47 yards on seven receptions. He also completed three short passes to Murphy when they switched roles in the offensive scheme.

Head coaches and longtime friends Judd Naeger of Valle and Kory Schweiss of Central met as opponents for the fifth time since taking over their respective teams in 2004.

Central receiver Caden Casey runs down the sideline with a 22-yard catch during fourth quarter action against Valle Catholic on Friday night in Ste. Genevieve.