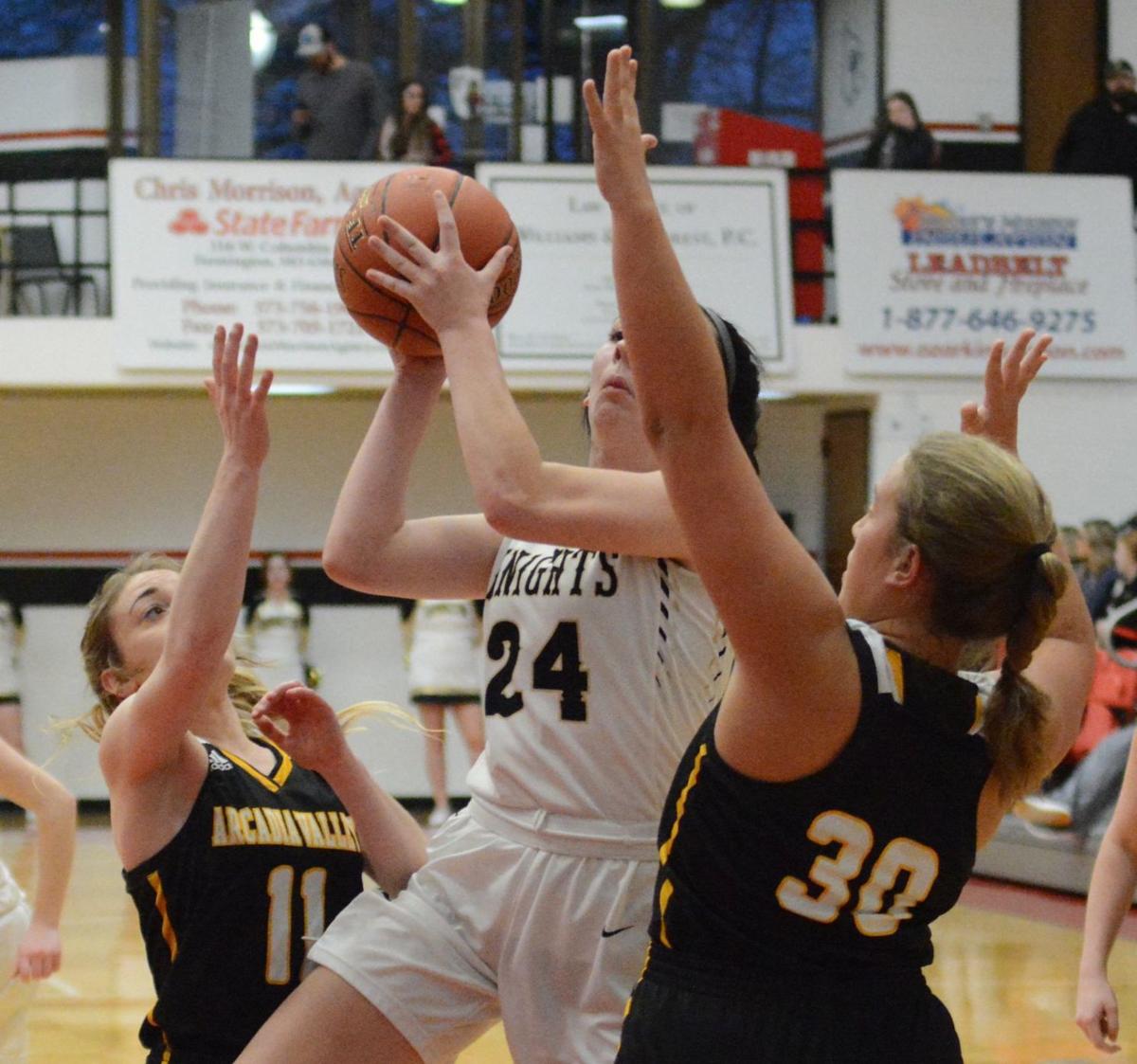 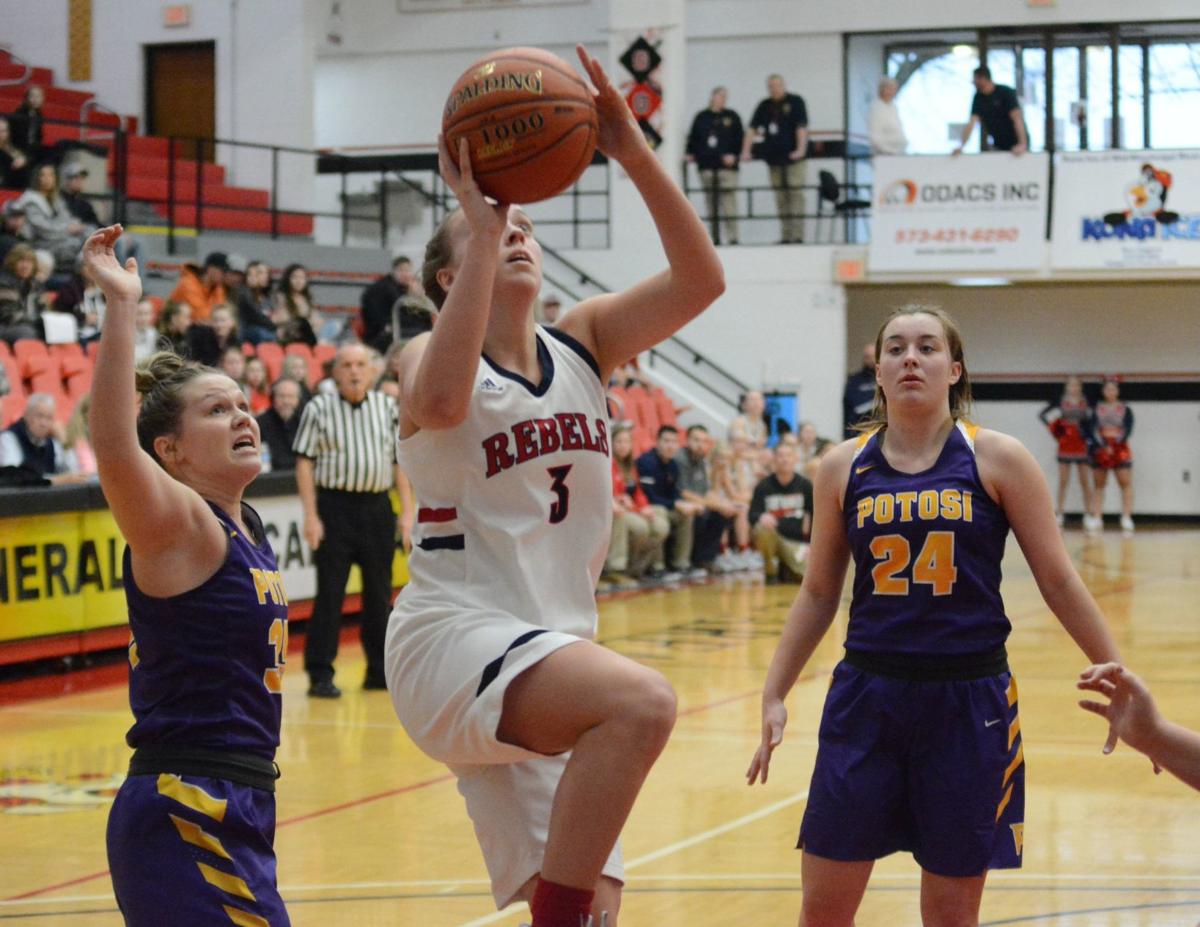 Central senior Avery Norris (3) elevates for a successful layup just before time expired in the second quarter of an MAAA Tournament girls quarterfinal game against Potosi on Tuesday. 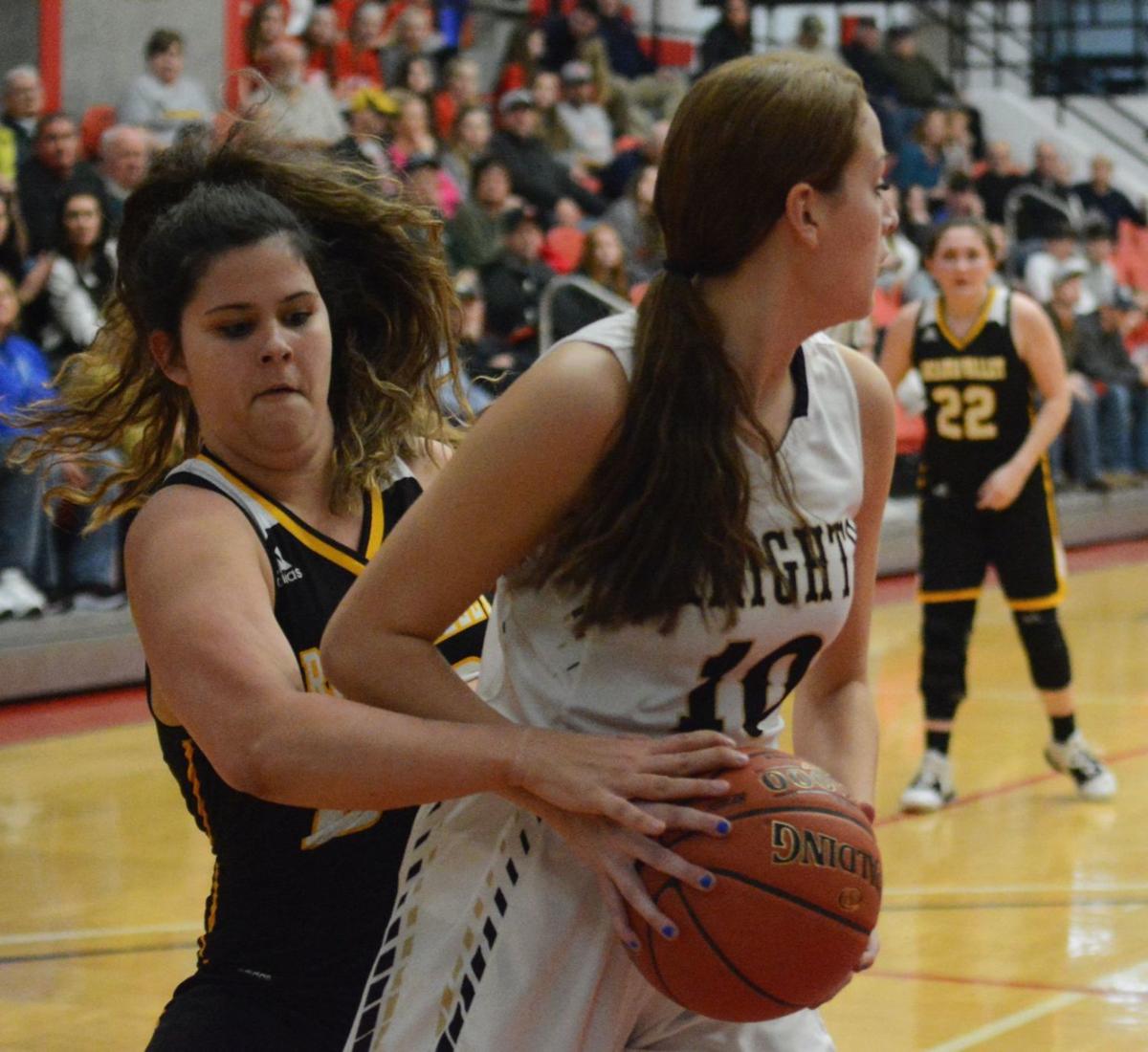 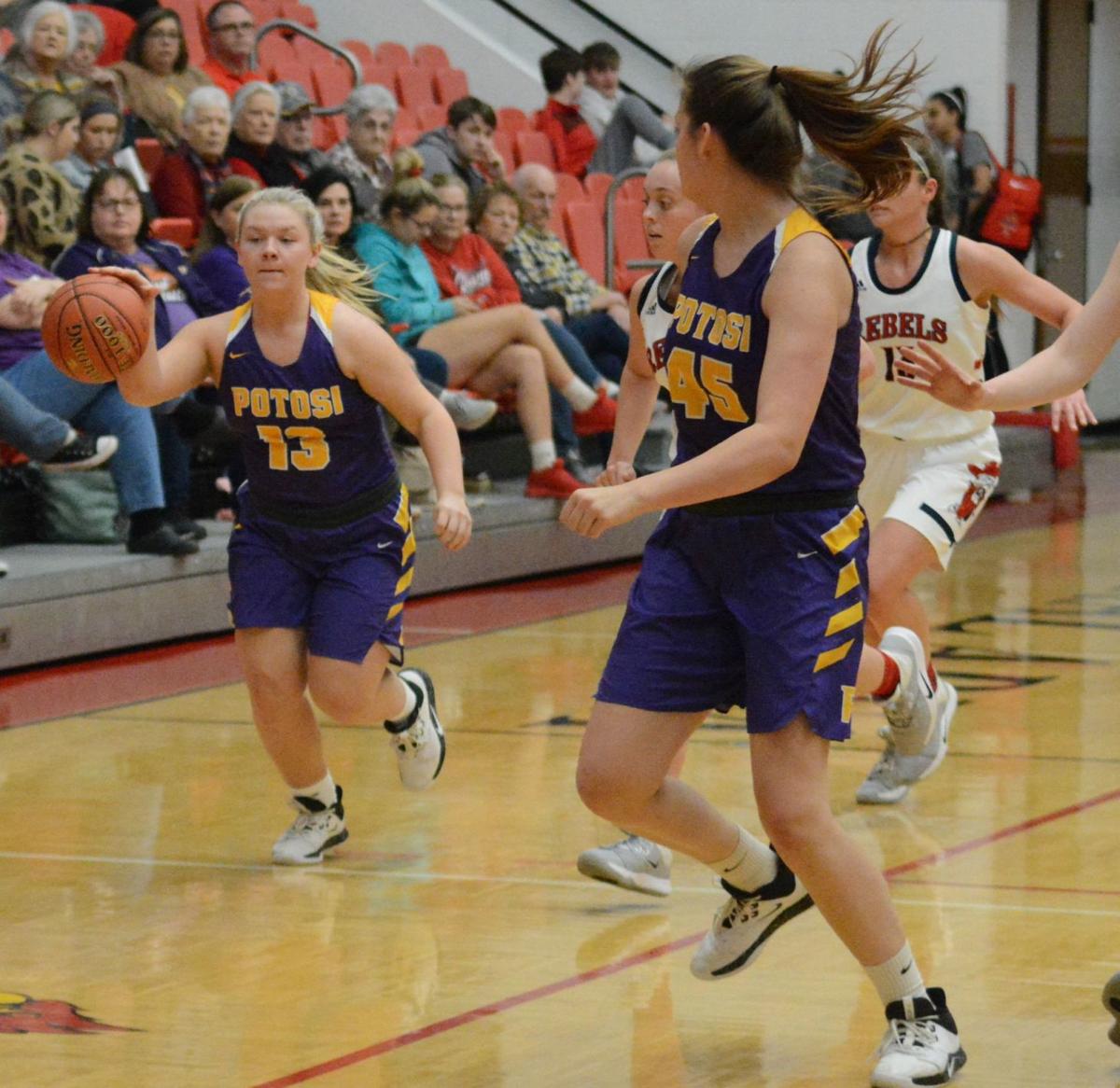 The Knights forced 21 turnovers through a flexible 2-3 zone that Arcadia Valley failed to solve, and advanced in the MAAA Tournament with a 43-38 quarterfinal triumph.

Farmington (10-8) was awarded the significantly higher No. 3 seed despite previously being routed 77-53, but validated that vote by reducing its points allowed by more than half.

Jade Roth posted a team-high 10 points along with eight rebounds, and extended a narrow Farmington lead to 37-33 on a corner 3-pointer early in the fourth quarter.

Angelia Davis, one of five freshmen earning healthy varsity minutes all season, increased the margin with an ensuing runner off the glass. She totaled seven points and nine rebounds.

The Knights endured their own offensive struggle with 19 turnovers and a dismal 6-of-20 showing from the line, but advanced to meet Central on Thursday.

Arcadia Valley (13-8) shot just 33 percent from the field, but rallied to within 39-38 with two minutes left after Gracee Smith hit a 3-pointer and Katie Whited rattled down a 13-footer.

A chance to possibly regain the lead slipped away on an inbounds pass, and Farmington held on after breaking pressure for a 2-on-1 layup from Skylar Sweeney to Abby Cassimatis.

Whited finished with 14 points, and put the sixth-seeded Lady Tigers ahead for the final time at 29-28 with a steal and transition layup. Farmington answered with a crucial 6-0 run.

Trista Hampton and Sweeney drained jumpers, and Bri Speakar added a putback as a Knights concluded the third quarter with a 34-29 edge.

Smith provided 12 points with three steals, and faced multiple perimeter defenders when possessing the ball after blistering the Knights for 36 points last month.

Arcadia Valley had numerous skip passes either stolen or deflected in a frustrating outing while getting minimal production from the post.

Whited gave the Lady Tigers an 11-9 lead with her second 3-pointer, but Farmington moved in front 16-15 on an excellent cross-over dribble and pass from Anna McKinney to Cassimatis.

Grace Duncan compiled seven points, six rebounds and four steals to bolster the Knights, who retained a 23-20 advantage at halftime.

PARK HILLS – Three members of the Central lineup scored double digits before halftime by relentlessly attacking the basket during a 70-53 MAAA Tournament quarterfinal win over Potosi.

Sophia Horton compiled 27 points and 10 rebounds while sinking 10-of-12 free throws for the second-seeded Central (17-4), which will face Farmington in the semifinal round on Thursday.

Avery Norris scored her 14 points exclusively in the first half while collecting eight rebounds, and Kaley Kimball likewise had 12 points before the break.

The Lady Rebels began an early 11-0 run when Horton and Aubree Eaton scored while drawing fouls, and capped it on a mid-range jumper by Madison Holmes in transition.

Potosi (10-11) continued a season of adversity with four players from its opening-game rotation not in uniform on Tuesday. Their absence offered a chance for younger talent to gain valuable experience.

Kya Gibson netted a team-high 13 points, and fellow freshman Kadence Sadler added eight before she fouled out late for the Lady Trojans.

Senior standout Olivia Coleman altered her role to handling the ball and driving from the perimeter out of necessity. She finished with 12 points and four assists while going a superb 9-of-10 at the line.

A layup by Gibson and 3-pointer from Sadler countered a powerful putback by Horton, helping Potosi stay within 31-20 near the midway mark of the second quarter.

But Kimball converted a 3-point play off a pass from Norris, who added two slashing layups as the Lady Rebels punctuated the half with a 14-0 surge to establish a 49-21 cushion.

Central committed only three turnovers prior to intermission, and enjoyed a maximum lead of 55-25 before ending the game with nine players in the scoring column.

Kaydence Gibson, Annie McCaul and Emily Hochstatter connected from long range as the Lady Trojans posted an 18-8 edge in the fourth quarter.

McCaul tallied seven points for Potosi, which faces Arcadia Valley in the fifth-place bracket on Friday.

A talented girls junior class remained a cornerstone of MAAA basketball throughout the recent season. Three members of that group have earned …

Peterson returning to court at Blackburn

FARMINGTON – Delaney Dohogne emerged from the Notre Dame bench, and pounced when any Central mistake created a fast-break opportunity.

PARK HILLS – For the second straight year in a district final, Kaley Kimball provided the hot hand under pressure that propelled the Central g…

FREDERICKTOWN – Saxony Lutheran established an assertive tone from the outset against West County in highly physical a Class 3, District 2 gir…

Central senior Avery Norris (3) elevates for a successful layup just before time expired in the second quarter of an MAAA Tournament girls quarterfinal game against Potosi on Tuesday.