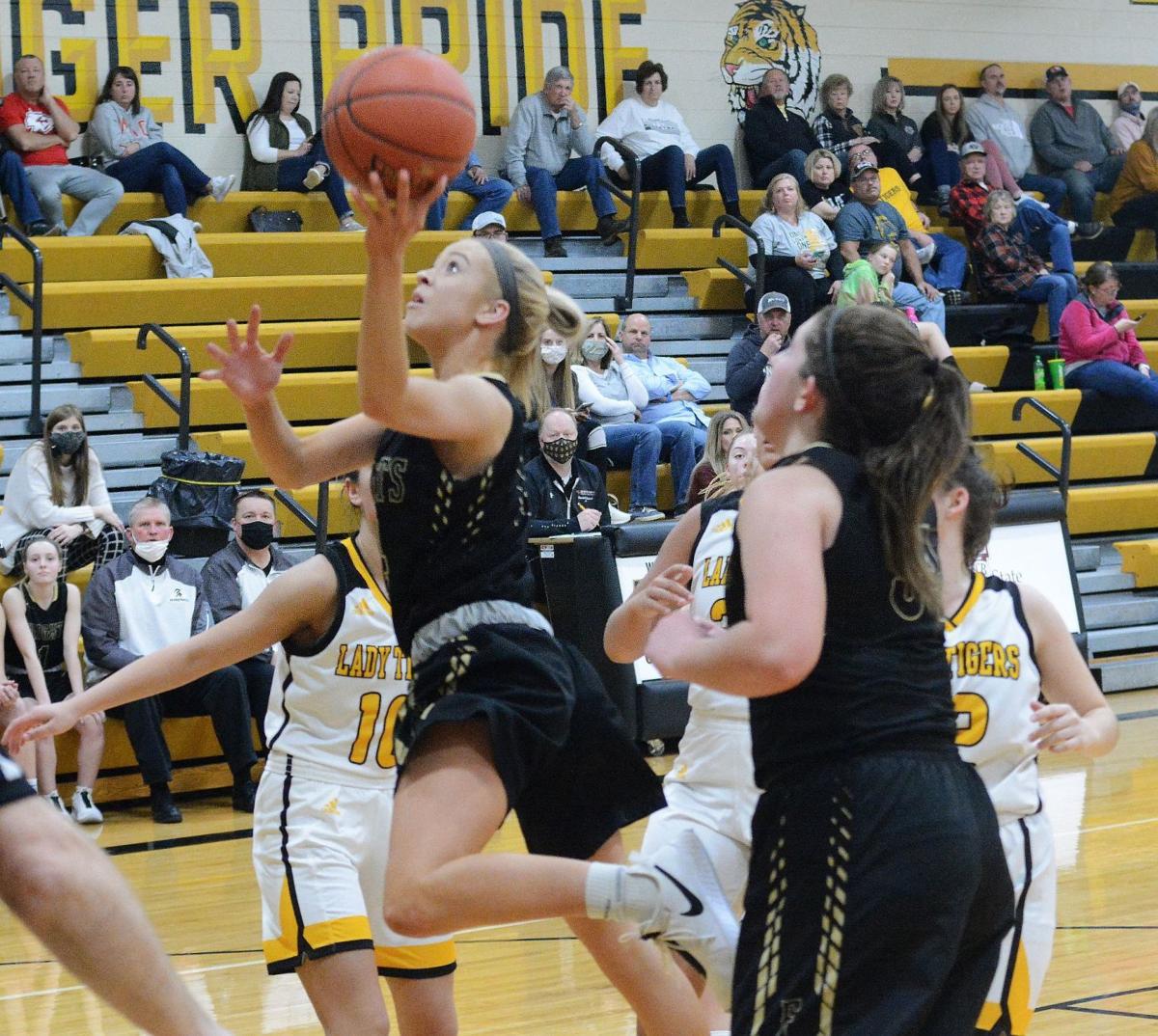 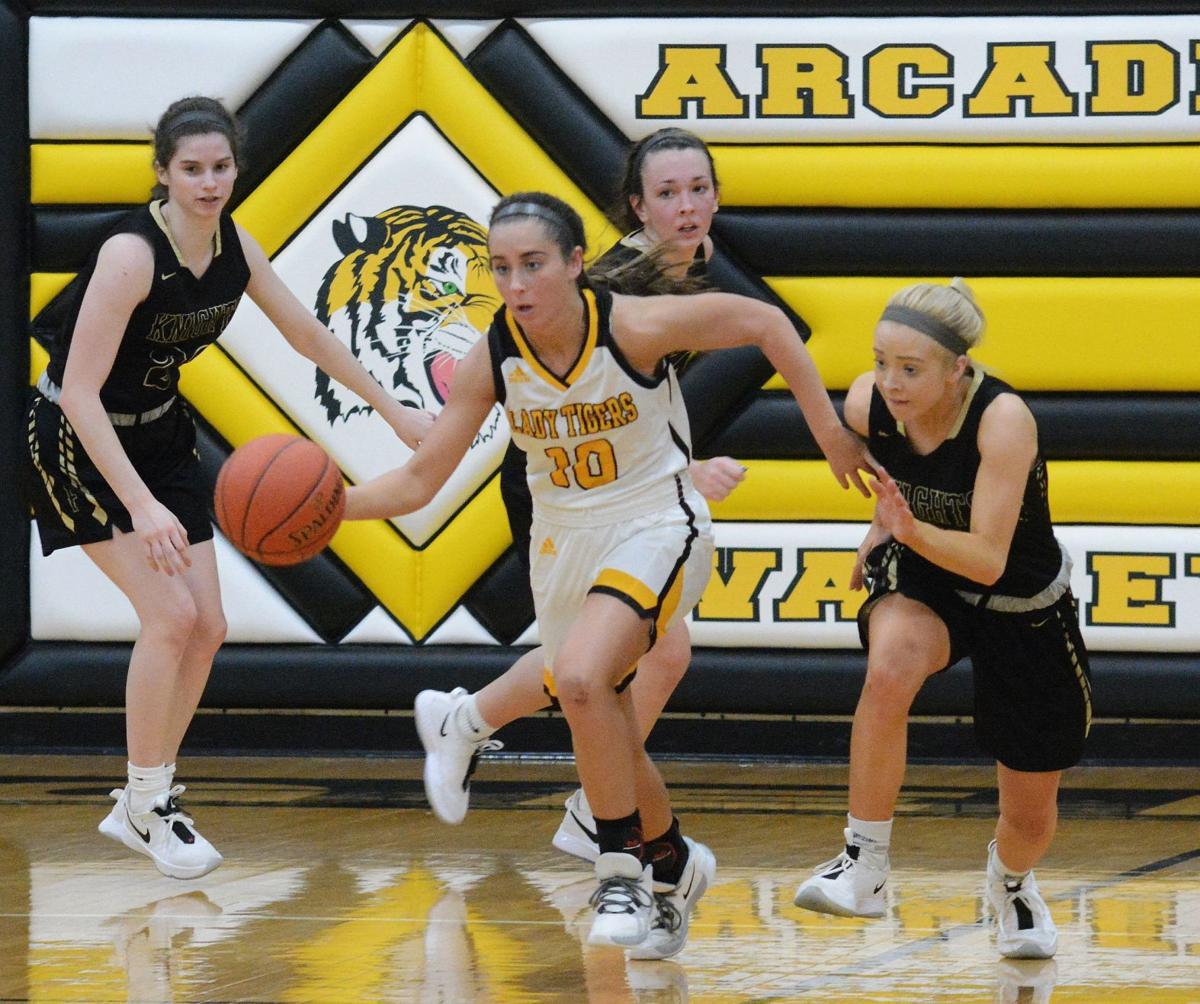 Arcadia Valley senior Gracee Smith (10) dribbles in transition after securing a rebound in the fourth quarter against Farmington on Monday night in Ironton. 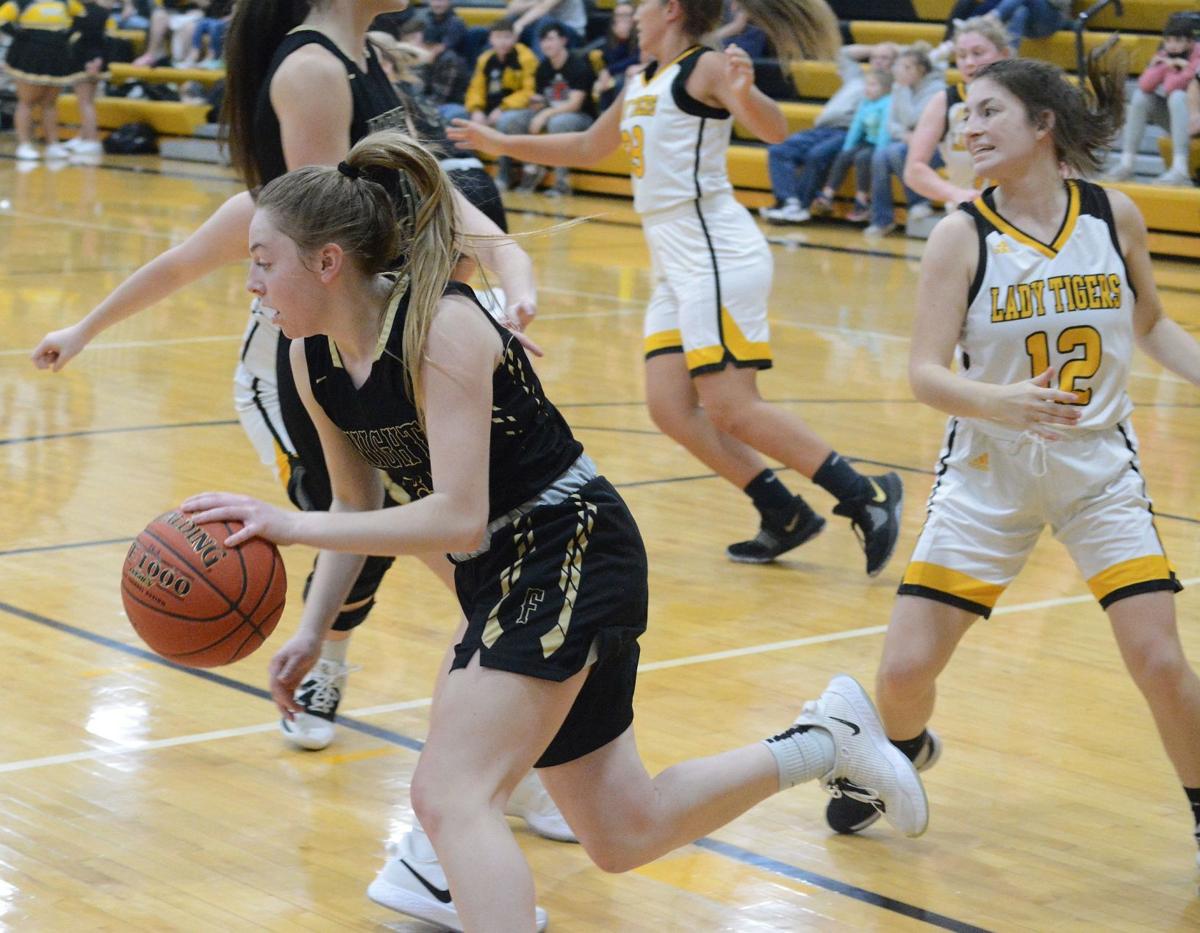 Farmington sophomore Anna McKinney dribbles in the backcourt after stealing a deflected pass during second quarter action against Arcadia Valley on Monday night in Ironton. 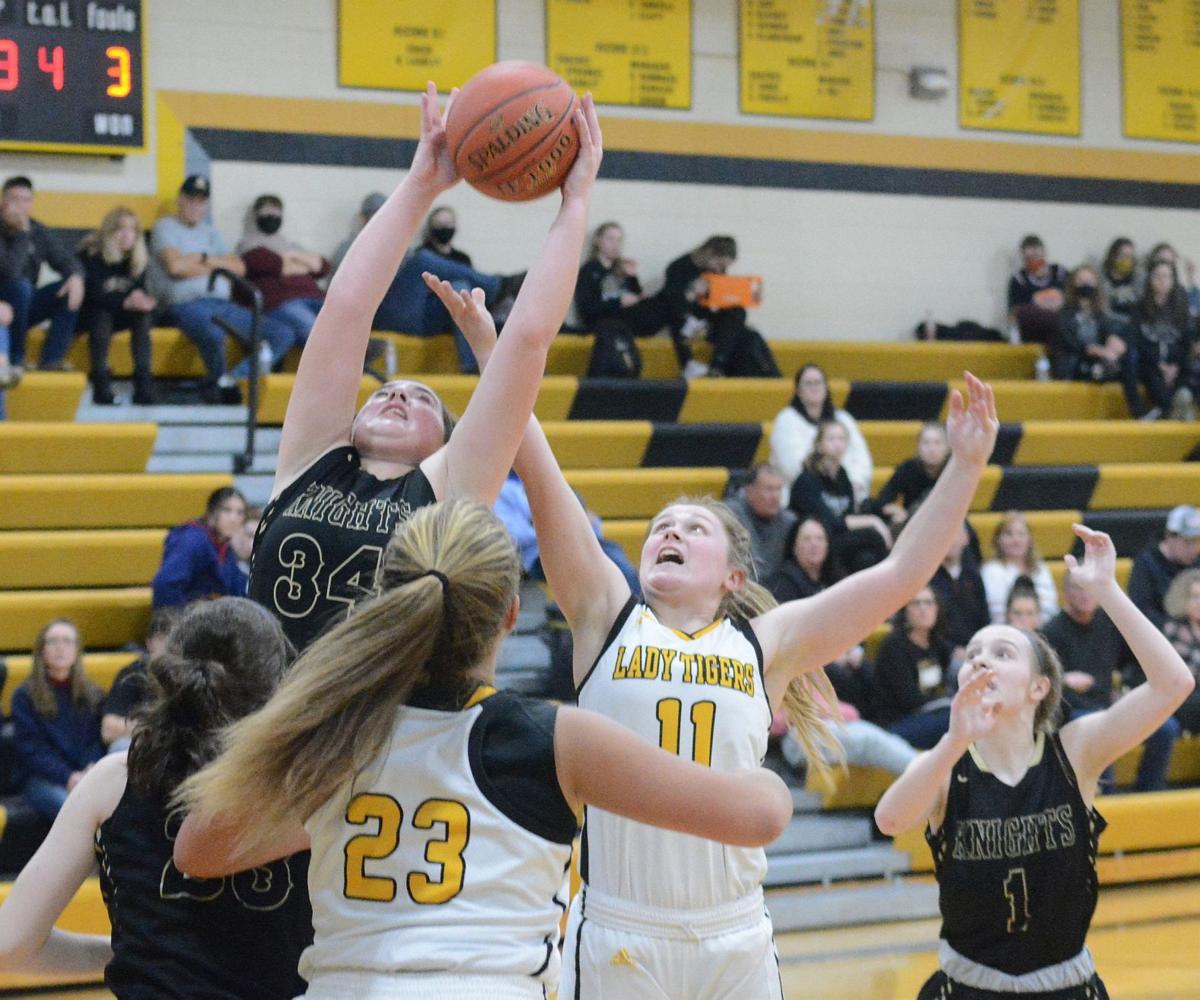 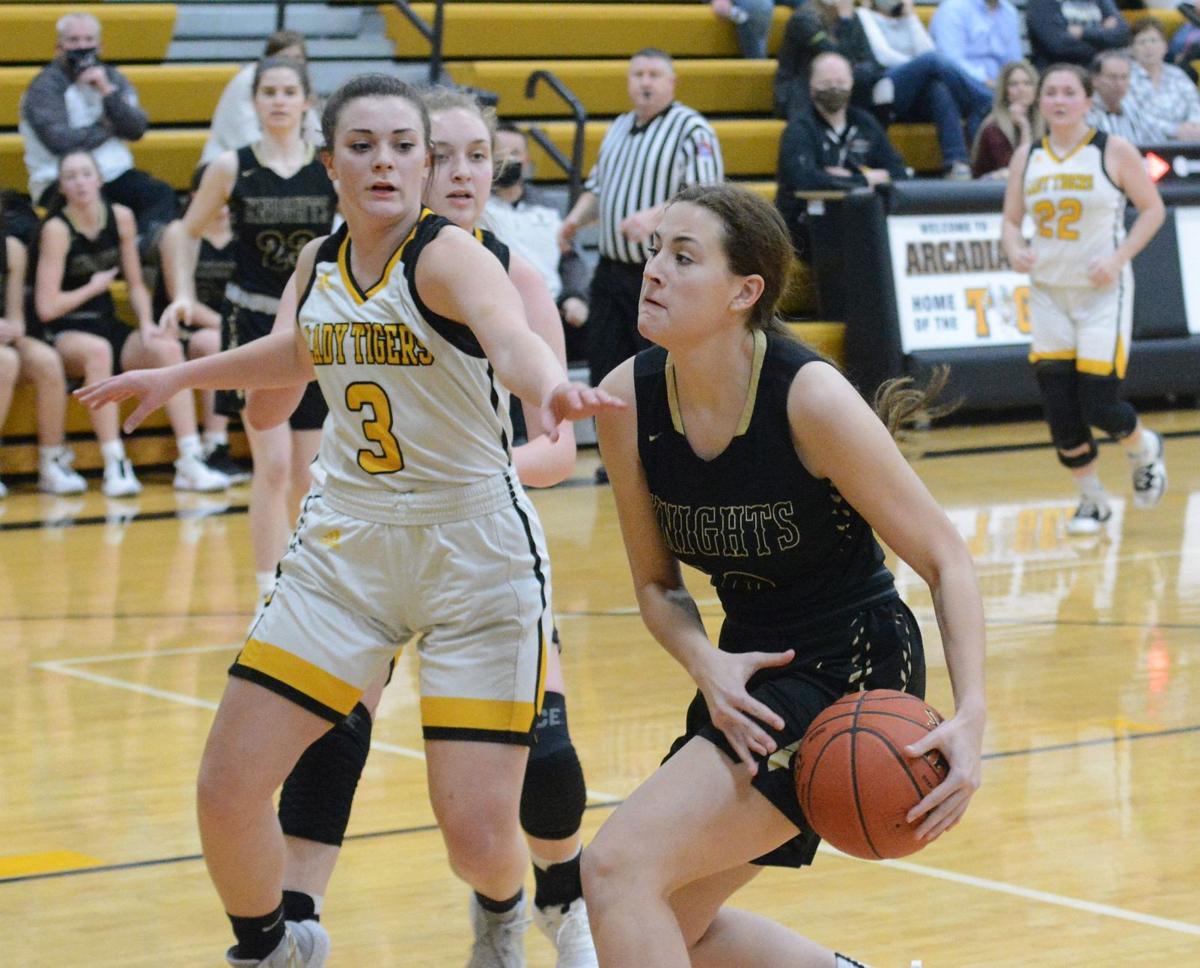 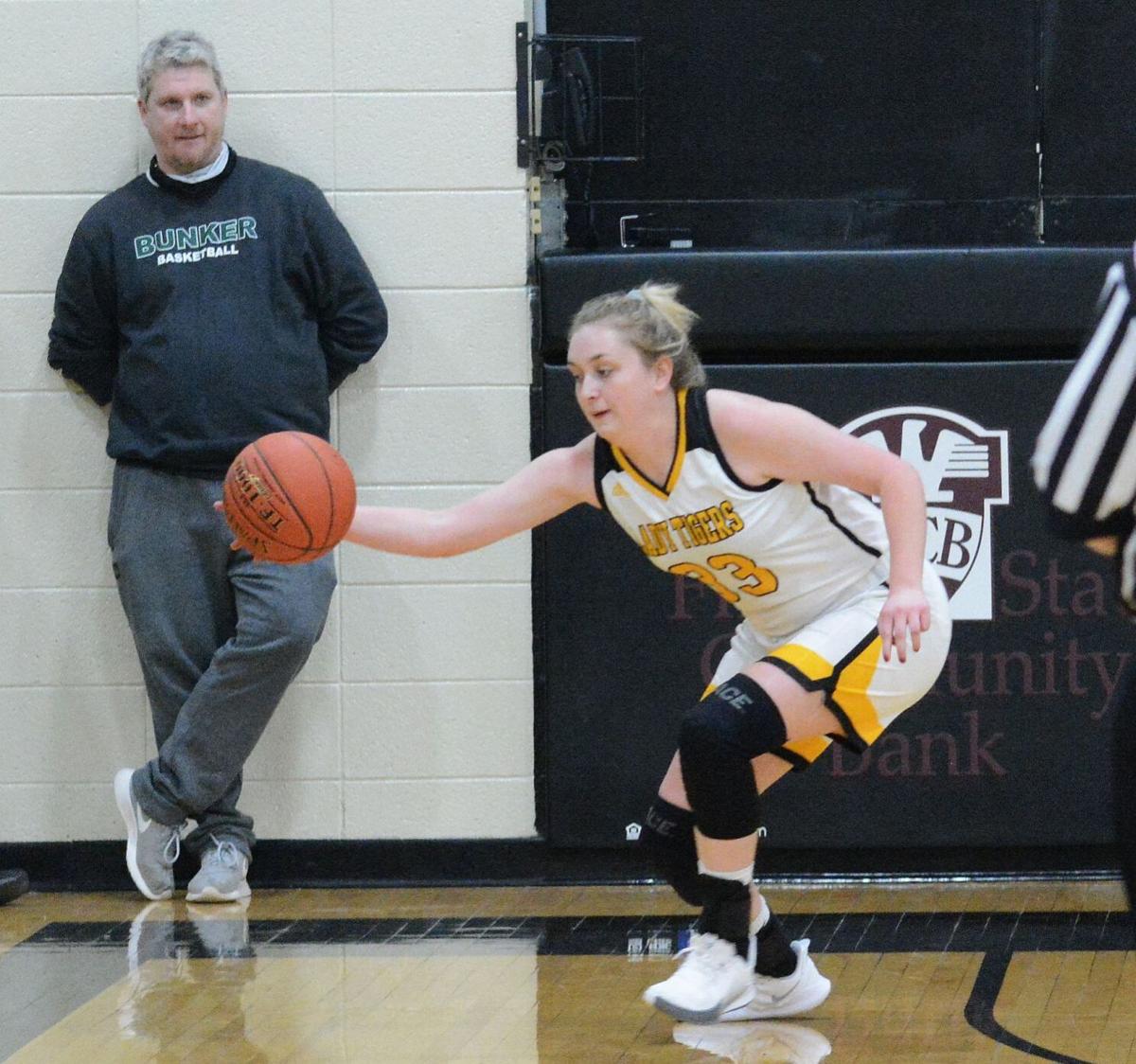 Arcadia Valley sophomore Molly Cook (33) saves a pass from heading out of bounds during the third quarter against Farmington on Monday night in Ironton. 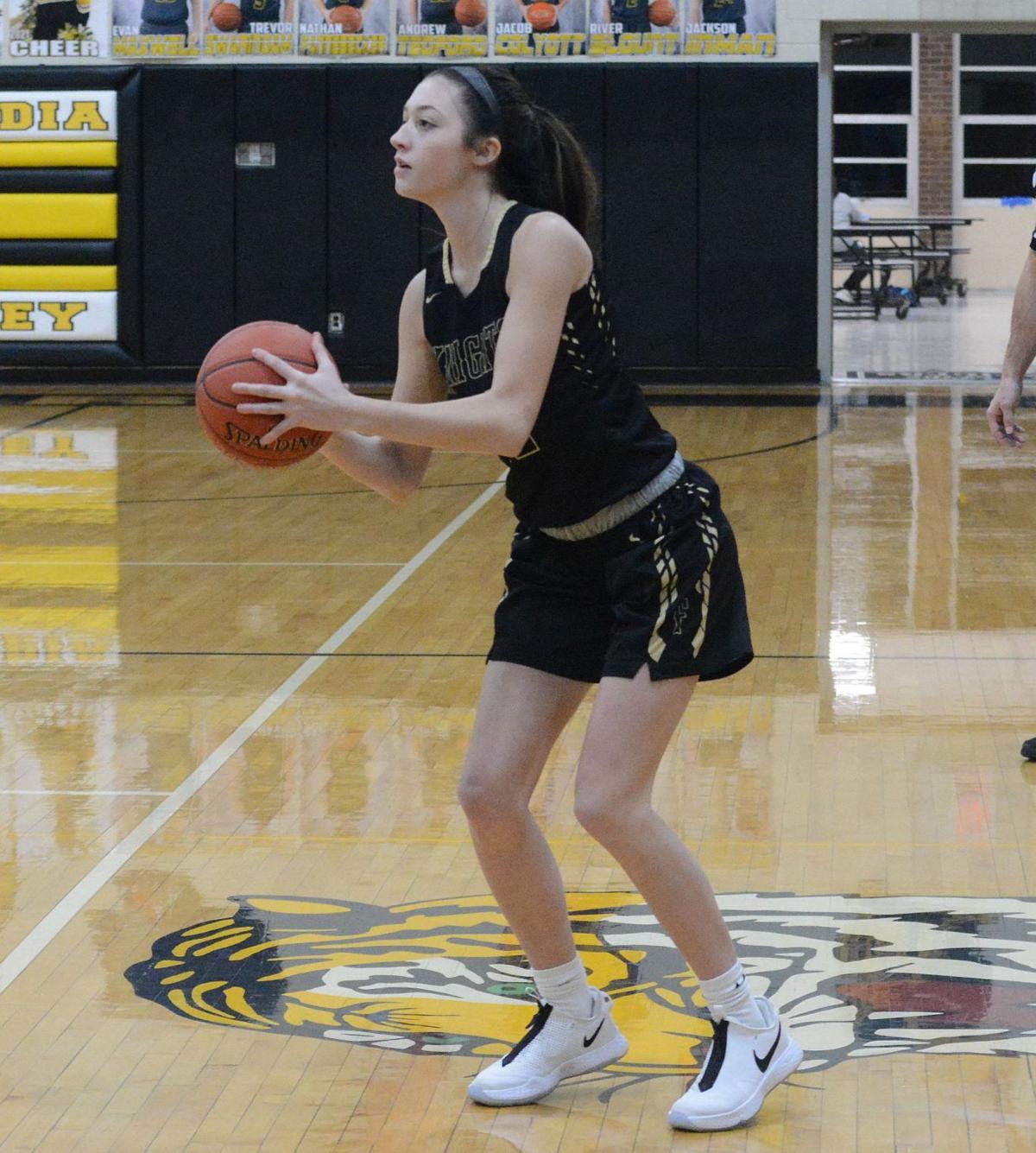 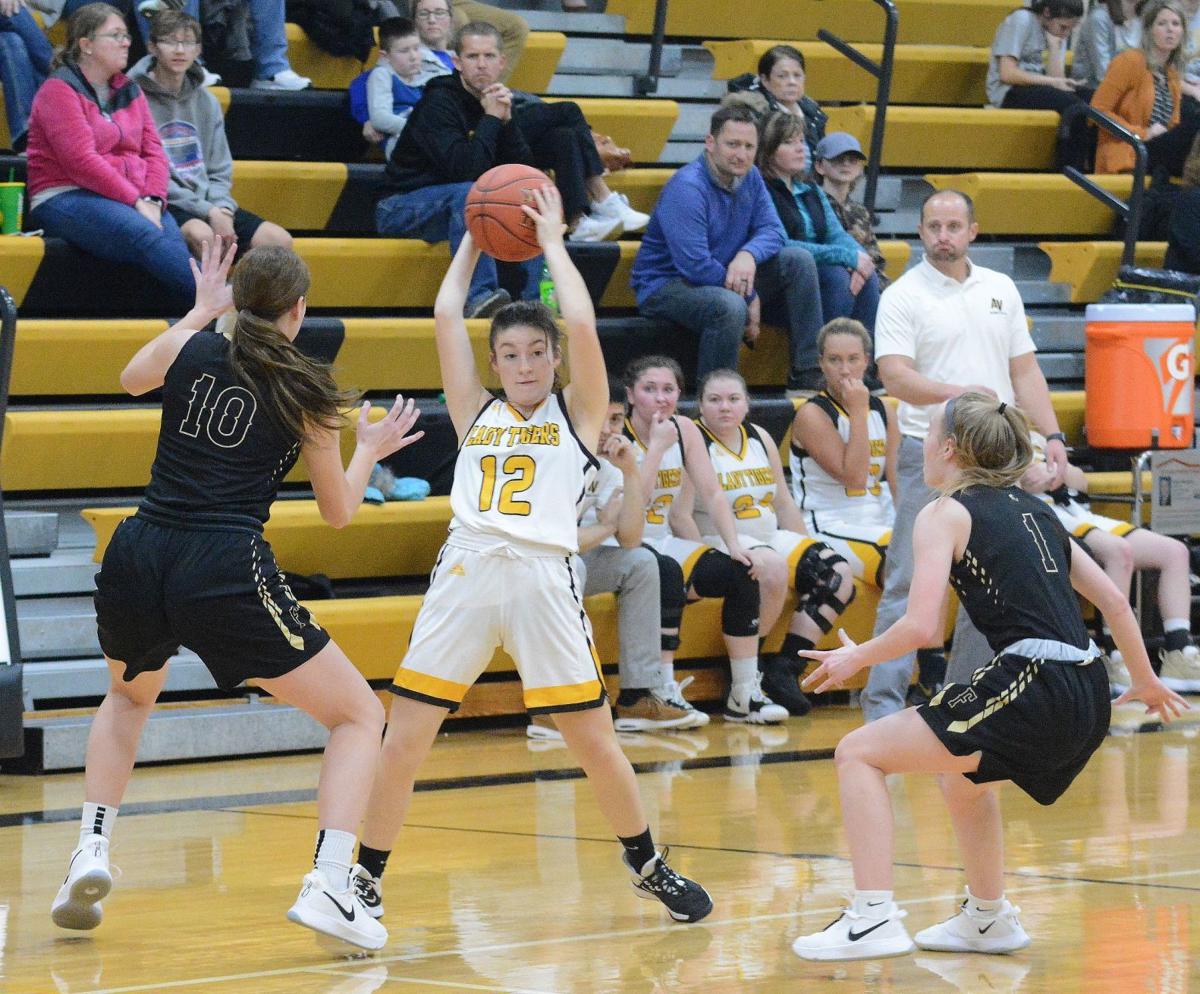 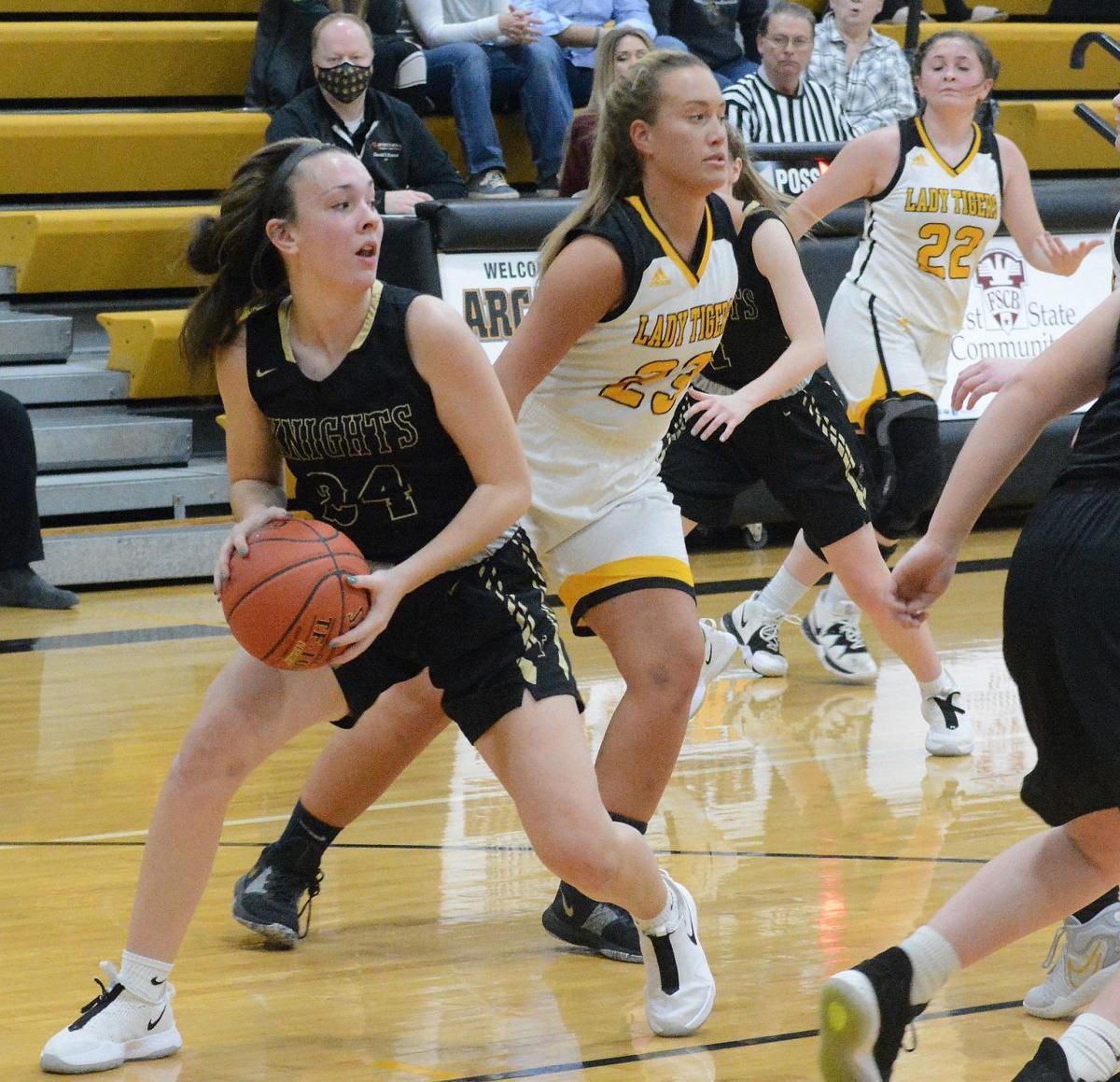 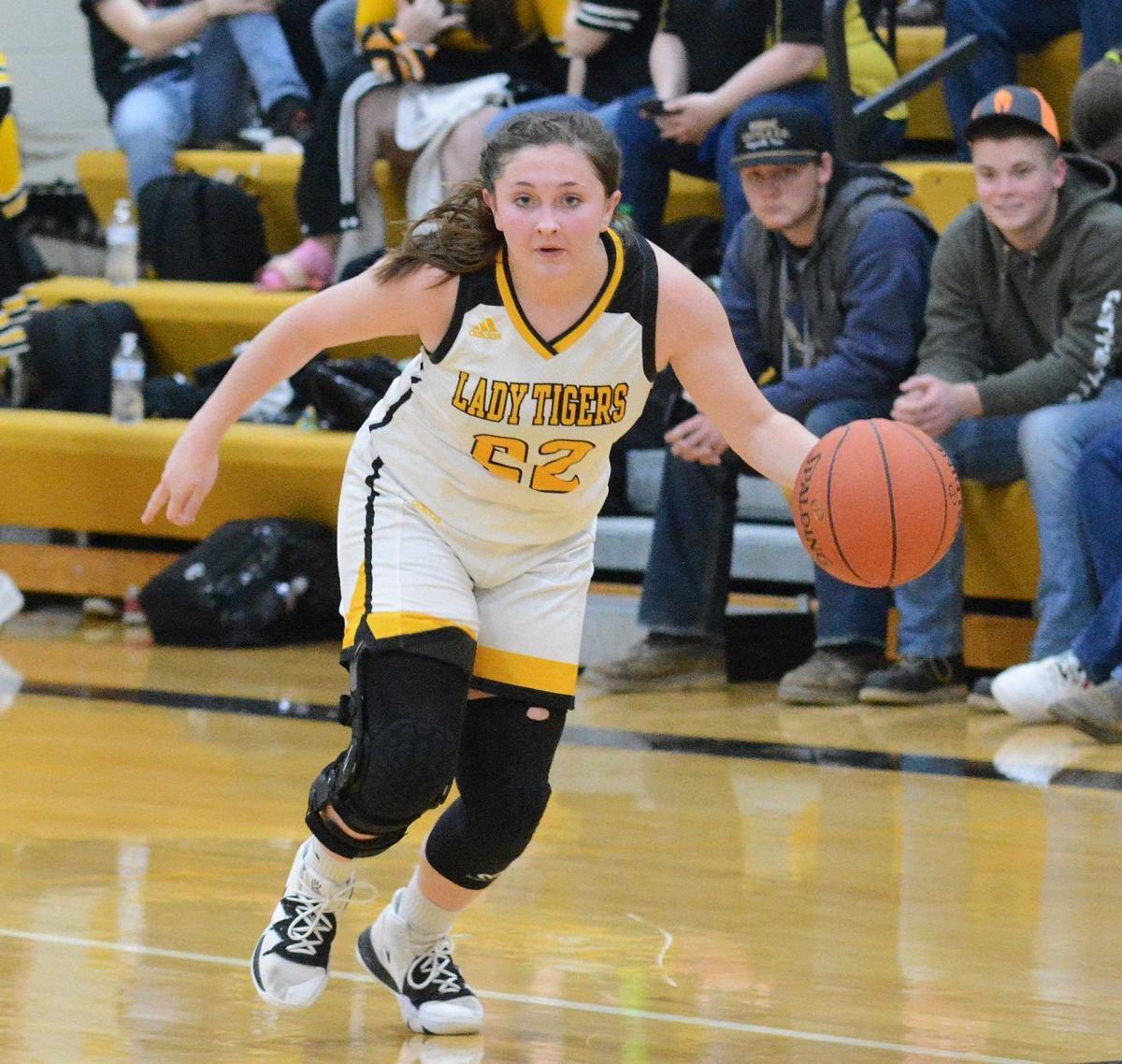 Arcadia Valley senior Jaidyn Phelps (22) dribbles into the frontcourt during the second quarter against Farmington on Monday night in Ironton.

IRONTON – Relying upon an even younger starting lineup than usual, the Farmington girls basketball team could not have anticipated a better opening salvo.

The Knights started 7-of-10 from the field while delivering four minutes of shutout defense, and earned a 65-56 road victory over Arcadia Valley on Monday night.

Skylar Sweeney drilled five 3-pointers, and Farmington (10-2) maintained a comfortable cushion for the duration of the game after initially surging ahead 17-0.

Jade Roth provided 15 points, including a 16-foot jumper that made the halftime lead 33-20, and Anna McKinney contributed seven assists toward the winning effort.

The all-sophomore starting five was missing Angelia Davis, who twisted an ankle during practice Sunday, and freshman Shelby Bowling was tapped to replace her at forward.

Effective ball movement helped the Knights click from the outset. Sweeney connected twice from long range with another triple from Roth in between.

Sweeney dished a 2-on-1 assist to McKinney after emerging with a loose ball, and Grace Duncan cleaned up a missed shot for two of her 10 points.

Gracee Smith helped Arcadia Valley (7-7) recover from that rough stretch with a 3-pointer and layup off a cross-over drive before the first quarter concluded.

Sweeney opened the second quarter with her third 3-pointer, and Trista Hampton found Bowling inside for a basket after Smith ripped control of a rebound away for an uncontested layup.

Alyssa Glanzer was the second AV player to dent the scoreboard when Jaidyn Phelps spotted her ahead on a fast break, but Farmington simply had more offensive weapons.

Duncan squeezed through a tight space along the baseline to score out of halftime, and McKinney took a clean subsequent steal to the basket for another layup.

Bowling chipped in six points and dived on the floor to control a loose ball before 3-pointers by Sweeney and senior Emma Williams ballooned the difference to 49-26.

Hailey Pauley capped the third quarter with a perimeter strike for AV, but a third-chance putback by Hannah Helvey and explosive drive by Smith were trumped by threes from Sweeney and Williams.

The Lady Tigers trailed 57-34 with 6 ½ minutes remaining, and were not called for a foul during the first 12 minutes over the second half.

Farmington had already reached the single bonus by that juncture, and Arcadia Valley cashed in 9-of-14 free throws down the stretch to eventually draw within single digits.

Smith sank eight consecutive tosses after missing a pair during the second quarter, and rattled in a 3-pointer to make it 59-45, part of 13 points in the final stanza.

The Knights stopped a modest slump by breaking pressure, resulting in insurance layups from both Roth and Bowling. Phelps capped the contest for AV with a 3-pointer from the right wing.

Farmington hopes to have Davis available for a crucial conference opener at home on Thursday against Ste. Genevieve.

Smith, already signed for next year with Mineral Area, needs 125 points to become the fourth MAAA girls player with 2,000 in a varsity career.

FARMINGTON – Sydney Bumgardaner guided pinpoint passes from the mid-post and perimeter to her Ste. Genevieve teammates while approaching a rar…

JACKSON, Mo. – North County players knew what to expect from a Jackson girls basketball squad that routinely regards the perimeter shot as its…

JACKSON, Mo. – Through nearly three quarters of basketball on Saturday, the Central girls collectively performed below the assumed standard at…

STE. GENEVIEVE – Megan Aubuchon scored 14 of her 19 points in the first half as the Ste. Genevieve girls basketball team pocketed its fifth co…

PARK HILLS – Notre Dame has represented a stubborn roadblock amid the success enjoyed by the Central girls basketball program in recent years.

LEADWOOD – The West County girls basketball team controlled the paint during a dominant second quarter, and claimed a second title prior to th…

Arcadia Valley senior Gracee Smith (10) dribbles in transition after securing a rebound in the fourth quarter against Farmington on Monday night in Ironton.

Farmington sophomore Anna McKinney dribbles in the backcourt after stealing a deflected pass during second quarter action against Arcadia Valley on Monday night in Ironton.

Arcadia Valley sophomore Molly Cook (33) saves a pass from heading out of bounds during the third quarter against Farmington on Monday night in Ironton.

Arcadia Valley senior Jaidyn Phelps (22) dribbles into the frontcourt during the second quarter against Farmington on Monday night in Ironton.