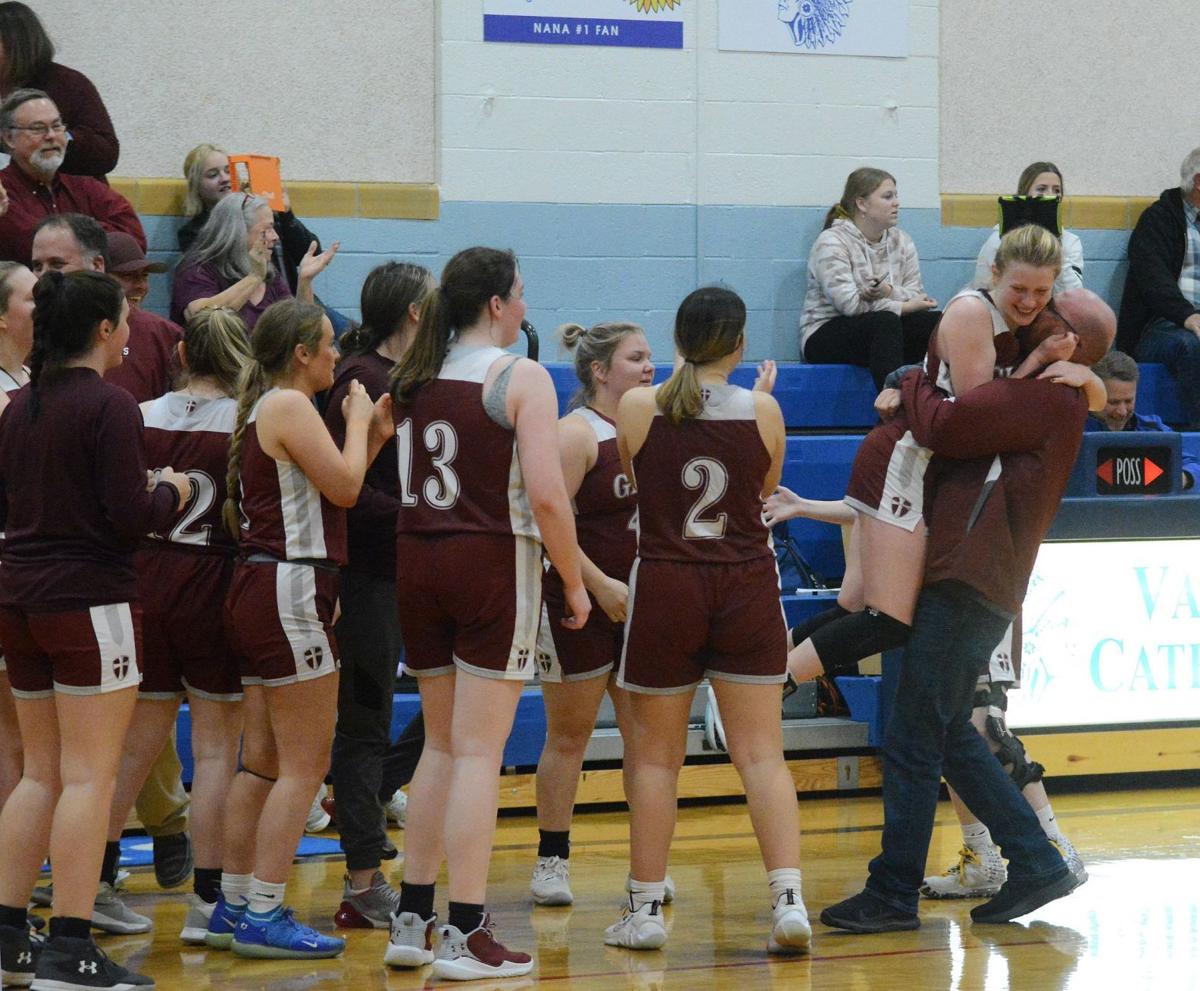 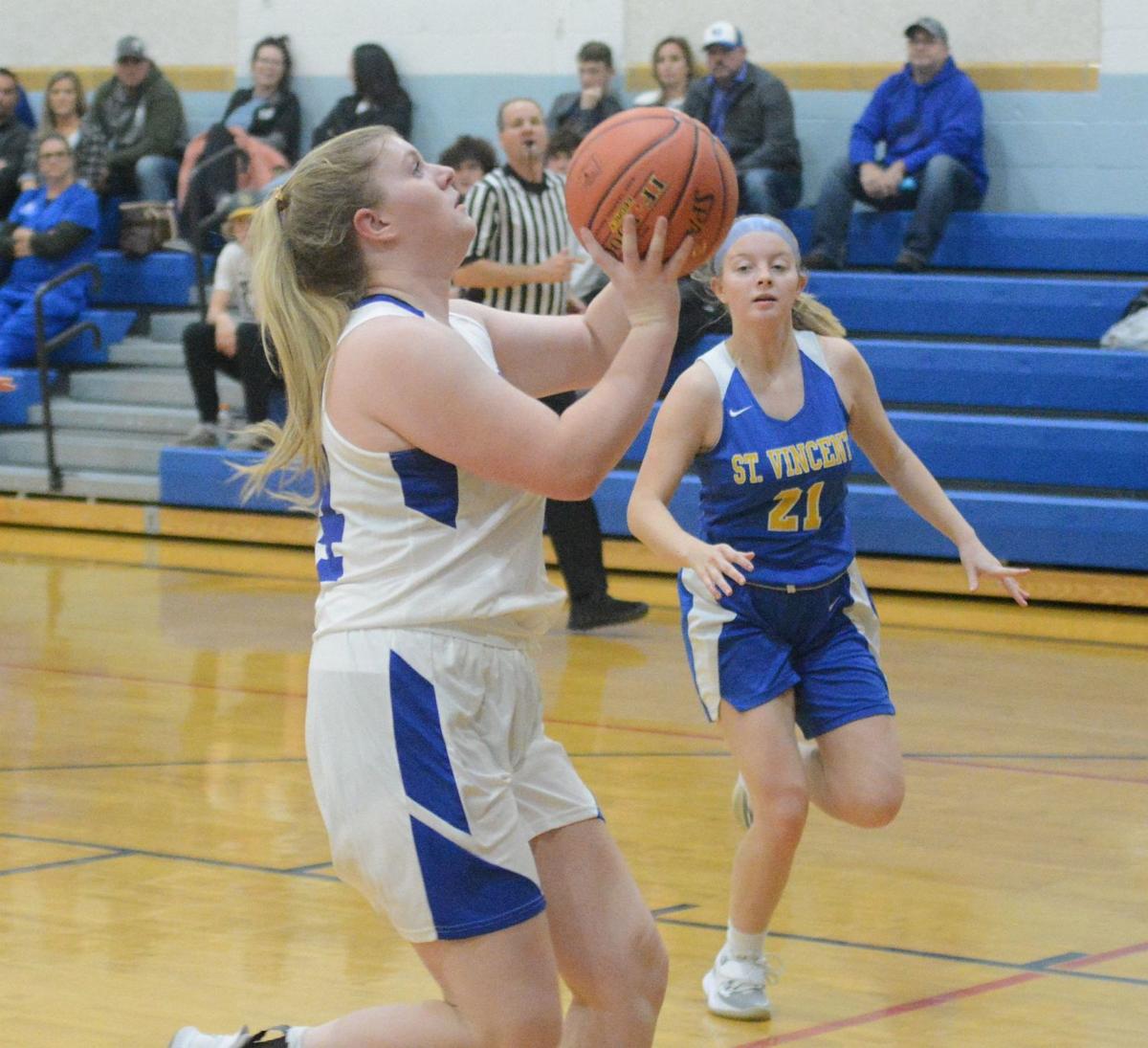 Valle Catholic forward Emma Christine gets behind the St. Vincent defense for a transition layup during the second quarter of a Valle Catholic Tournament game on Monday night in Ste. Genevieve. 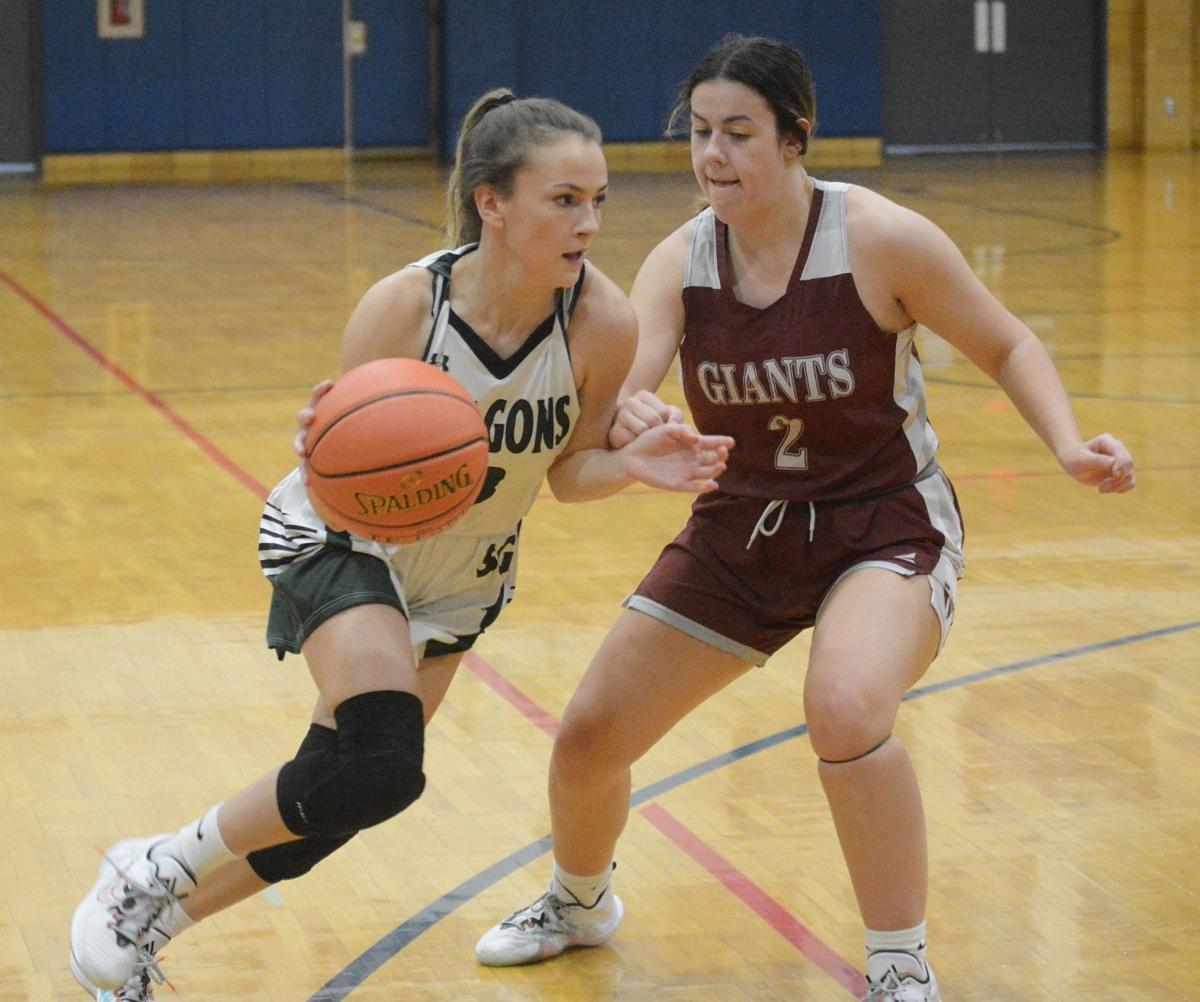 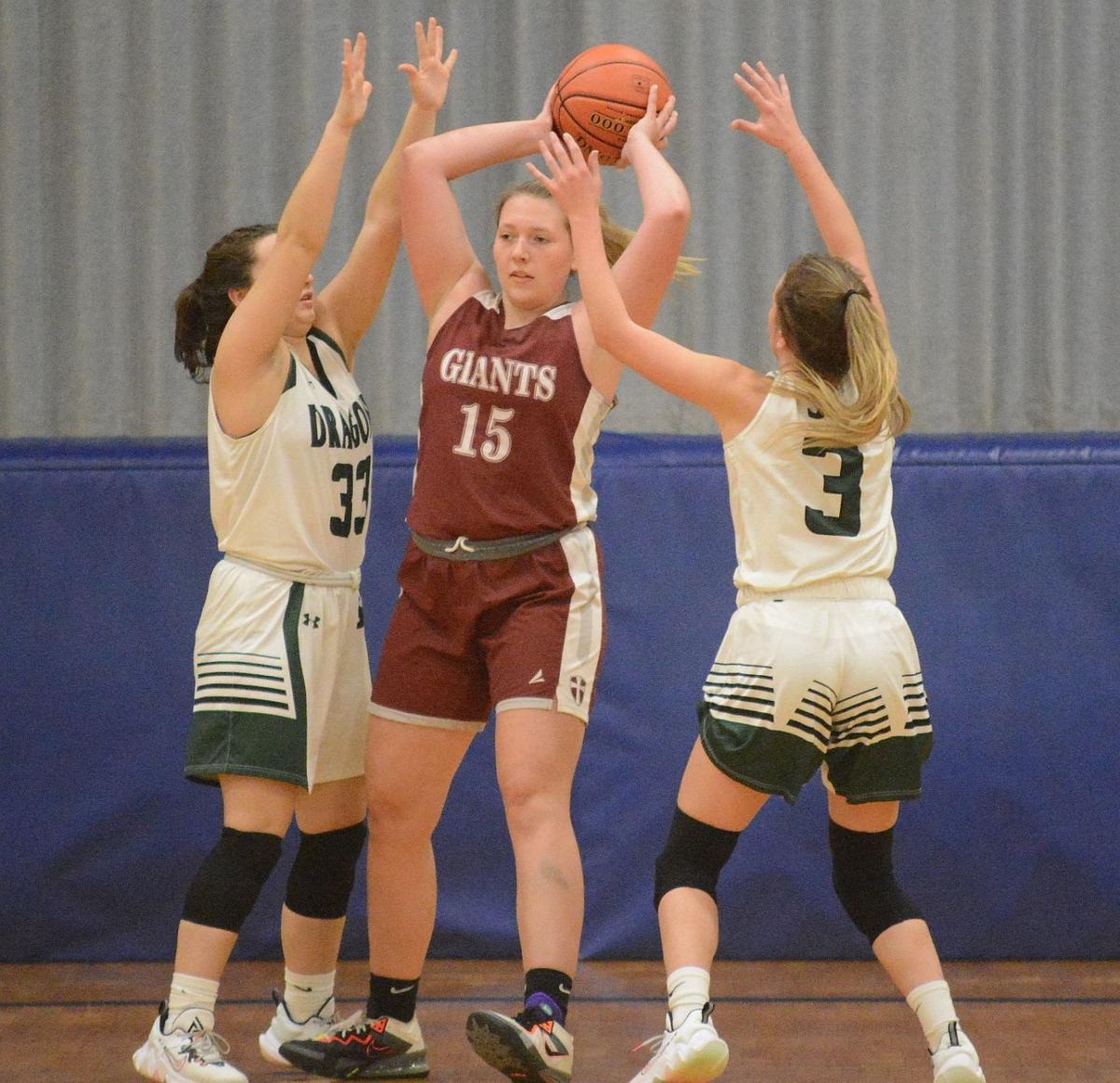 St. Paul forward Riley Petty (15) looks to pass against a Ste. Genevieve double team by Chloe Staffen (33) and Alli Byington (3) during the third quarter of a Valle Catholic Tournament game on Monday night in Ste. Genevieve. 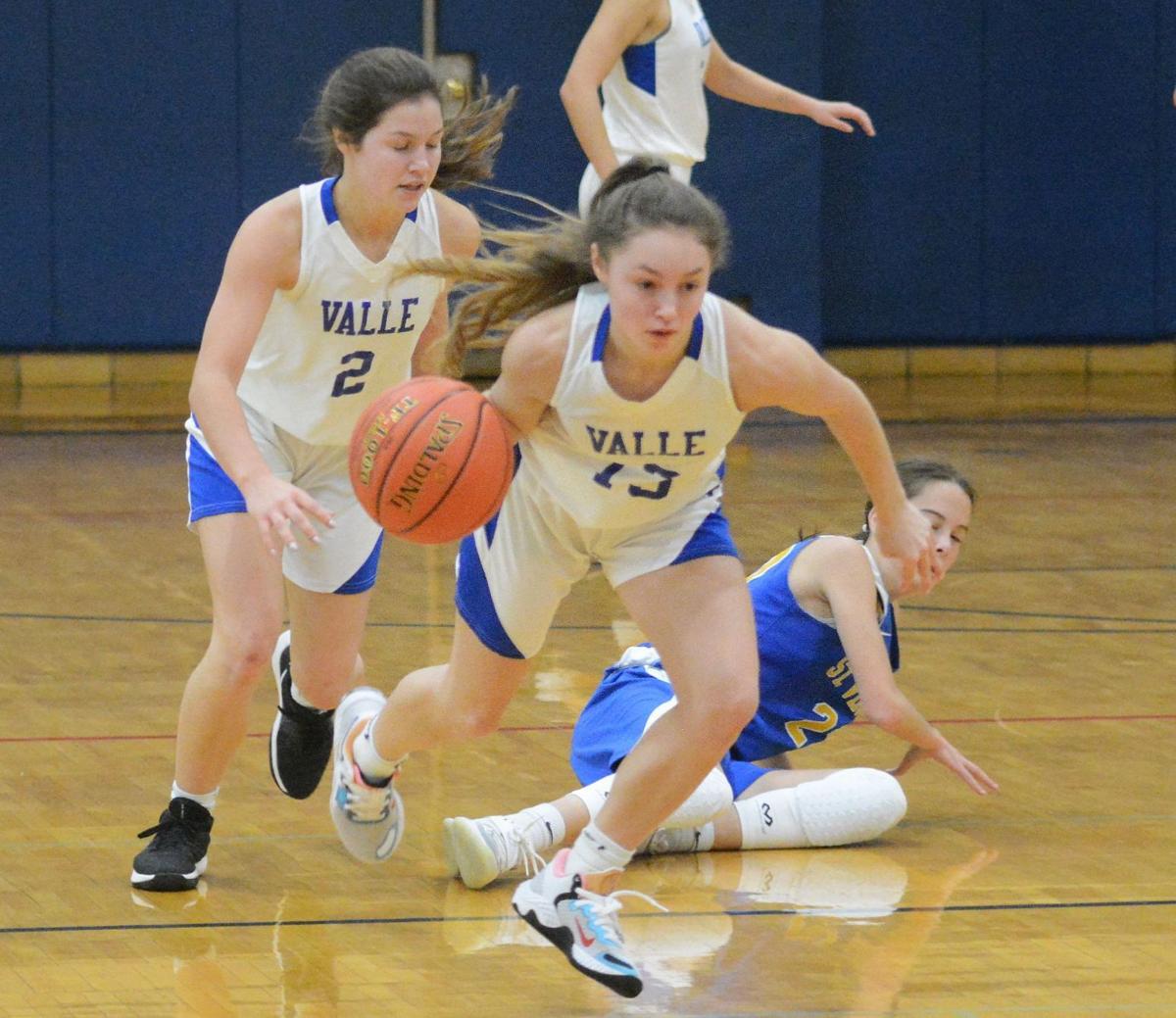 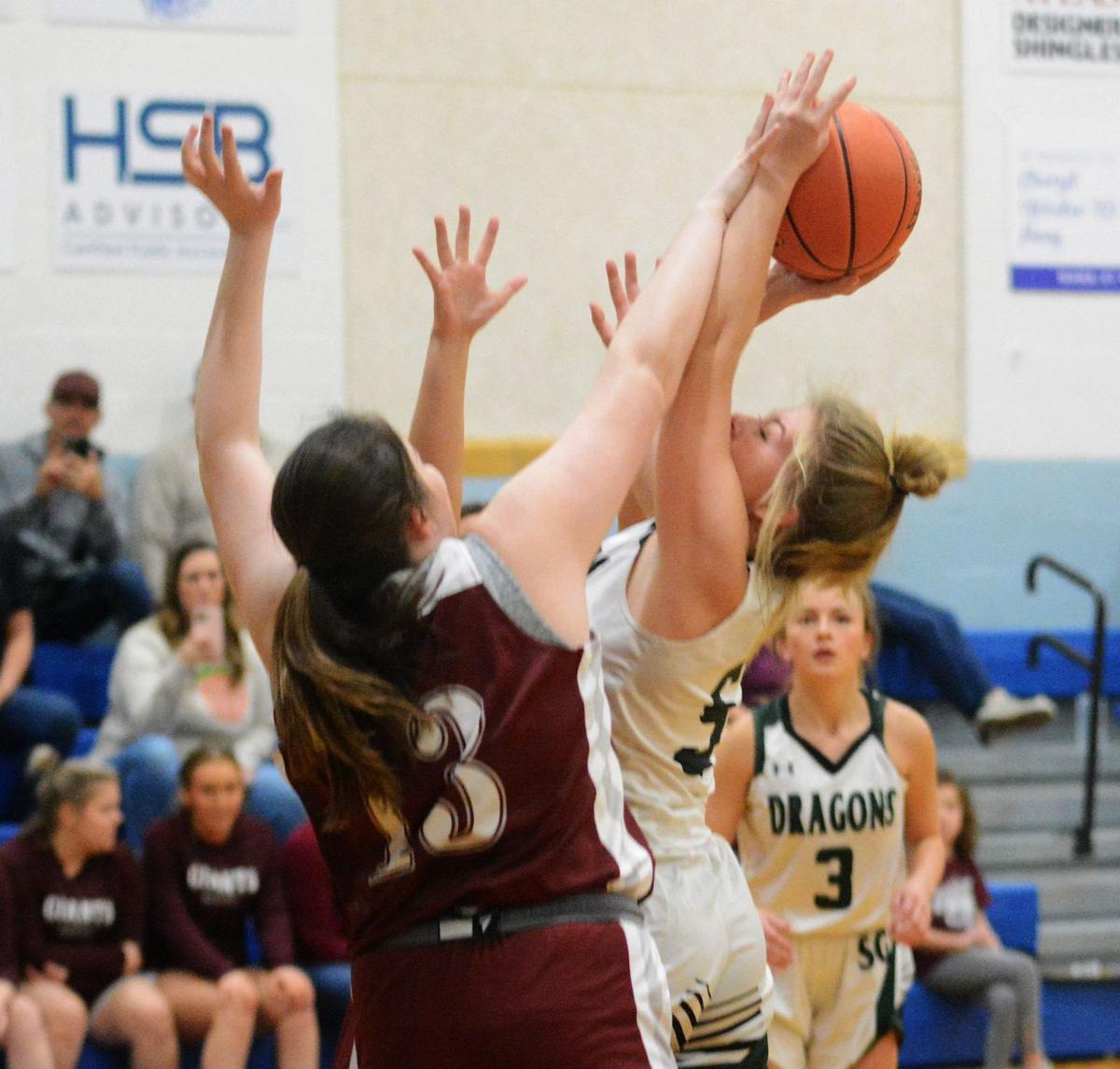 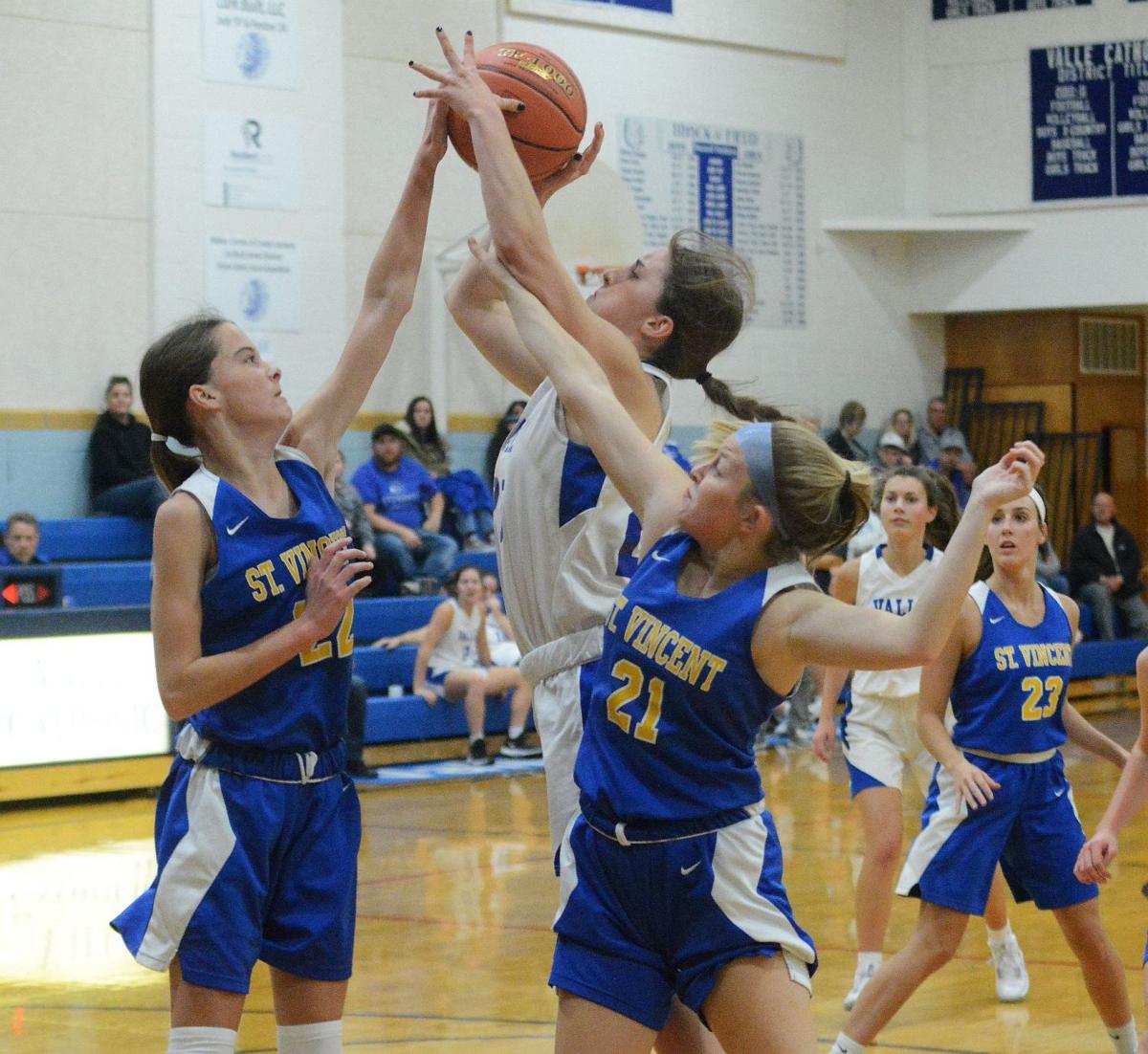 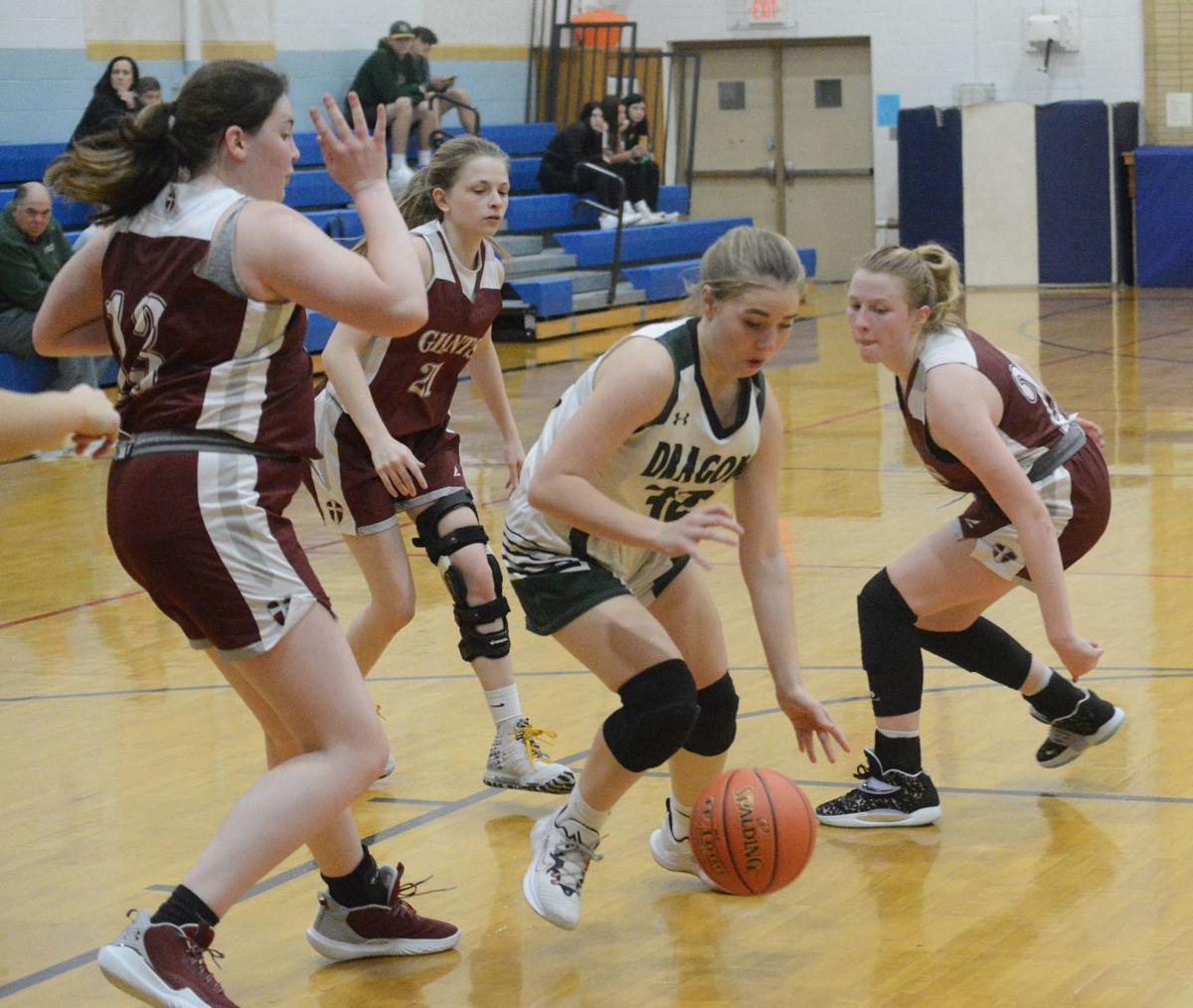 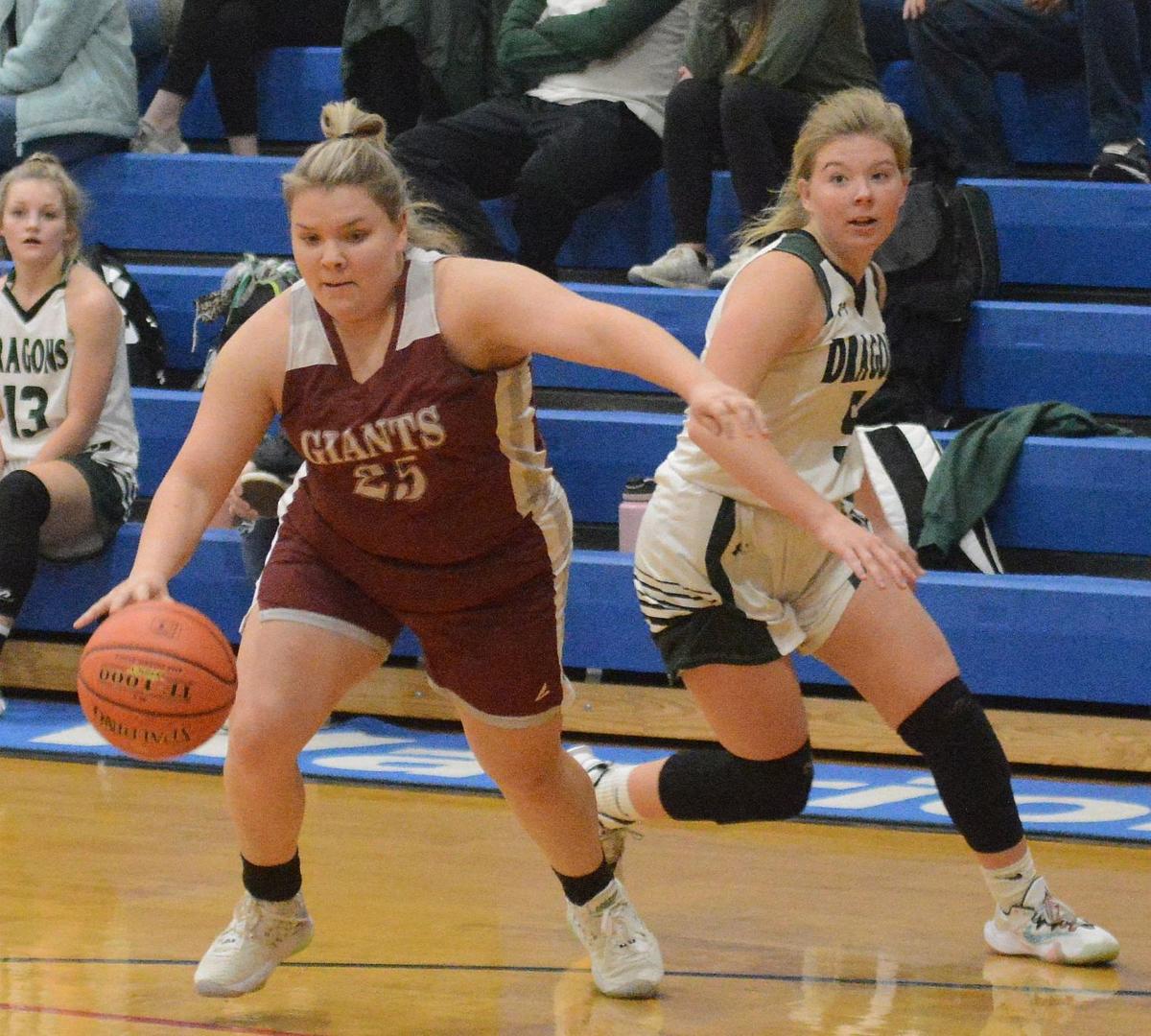 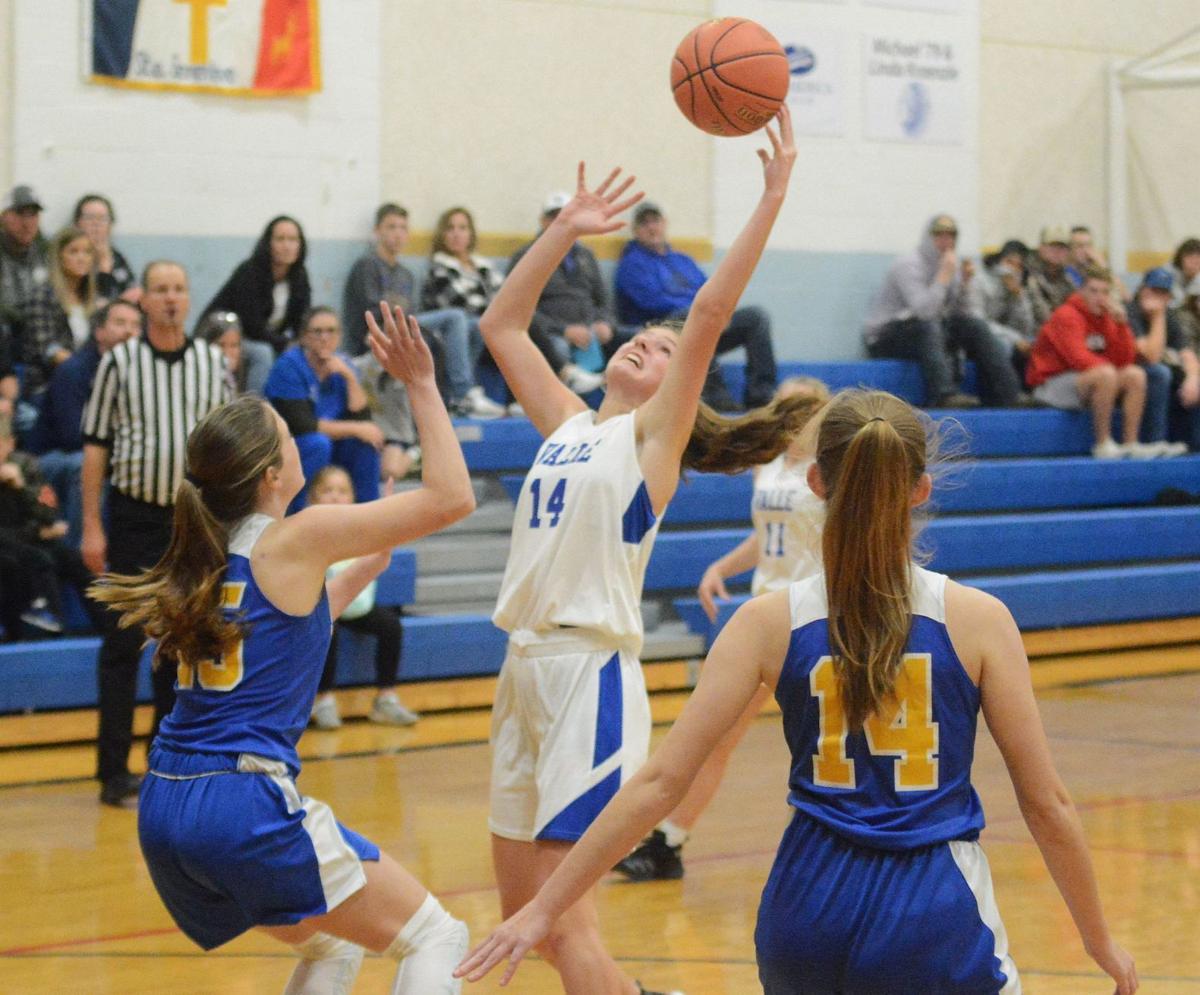 Valle Catholic forward Madelyn Griffard (14) tries to reel in a high entry pass during the fourth quarter of a Valle Catholic Tournament game against St. Vincent on Monday night in Ste. Genevieve.

STE. GENEVIEVE – Brylee Durbin was dribbling briskly across the midcourt line as St. Paul Lutheran head coach Andy Sherrill called a timeout to calm everything down with five seconds left.

The ensuing inbound pass found her hands again, and the junior guard delivered the signature shot of an already impressive varsity basketball career on Monday night.

Durbin swished a contested 3-pointer from the left side just before time expired, and finished with 32 points and four steals as the Giants edged Ste. Genevieve 63-62 at the Valle Catholic Tournament.

Senior forward Riley Petty totaled 19 points and 12 rebounds before fouling out late, and St. Paul (2-1) earned its first victory over a Class 4 opponent in program history.

Durbin made the most of her second chance for a go-ahead shot, and immediately leaped into the arms of her father and assistant coach Ben Durbin in celebration.

St. Paul will face Valle Catholic on Wednesday with the winner claiming a clear inside track to the four-team, round-robin tournament title.

Alli Byington connected four times from long range, and totaled 18 points plus five assists to pace Ste. Genevieve, which enjoyed the largest lead for either squad at 29-20.

Kylee Clayton provided a double-double with 14 points and 10 rebounds for the Dragons while Staffen added nine points. Neither team led by more than four in the second half.

Ste. Genevieve jumped ahead 57-53 on a baseline drive by Kayden Huck with exactly three minutes to play after Byington drilled a go-ahead triple on the previous possession.

Durbin answered with four straight free throws to finish 10-of-12 for the game, then turned a midcourt steal into a clear breakaway for a layup and 59-57 St. Paul edge with 2:08 left.

The teams traded ensuing defensive stops, and Ava Meyer ripped control of a rebound away before finding Staffen ahead of the pack for a tying layup.

Byington handed Ste. Genevieve a 17-10 advantage after draining her second 3-pointer late in the first quarter. The solid start was also fostered by effective double-team pressure against Durbin.

St. Paul countered by moving the ball inside to Petty for five field goals before halftime. She was assisted three separate times by fellow senior Molly Clements on entry passes to the low post.

Regean Naeger buried her second 3-pointer to restore a 32-28 lead for the Dragons at intermission, but Durbin propelled the Giants from there with 10 points over the next four minutes.

Ste. Genevieve forged a 48-48 tie when Staffen banked in a tough leaner before the third quarter buzzer.

STE. GENEVIEVE – Valle Catholic pestered St. Vincent into 29 turnovers, and opened its season Monday evening with a 46-32 triumph at its home round-robin tournament.

Valle Catholic (1-0) seized control of a mostly choppy contest with a crucial 11-0 run that extended a 32-29 advantage during the final period.

Freshman Brooklyn Weibrecht found Ade Weiler cutting along the opposite edge of the lane for a basket through contact, and forward Ella Bertram added a turnaround shot from the post.

Christine hit an uncontested layup off a steal by Sam Loida, and the Lady Warriors were coasting by the time Mia Weiler beat St. Vincent down the court for a transition layup at 43-29.

St. Vincent (1-1) overcame nine turnovers and a 0-for-8 effort from the field in the first quarter to grab a 10-7 lead on a 3-pointer by Addie Cates, who notched a team-high 11 points.

Anna Schwartz broke a 12-12 tie before the intermission with a transition layup, then extended a narrow edge with a putback as the Lady Warriors failed to box her out.

Christine restored a 26-21 Valle advantage after securing an offensive rebound in the third quarter.

Cailyn Prost chipped in 10 points for the Indians.

ST. LOUIS – Jade Roth netted a game-high 16 points, and helped punctuate a dominant first half by the Farmington girls with a couple of long-range strikes on Monday evening.

The Knights used stingy defense to smother Mehlville 62-24 and advance to the championship game of the Southside Classic at Oakville High School.

Farmington (3-0) generated a 39-6 halftime lead, and will face either Oakville or Lindbergh for the title on Friday at 6:30 p.m.

FREDERICKTOWN – Central put 10 players in the scoring column, and routed Naylor 59-34 as the top seed in the Fredericktown Tournament on Monday night.

Senior guard Olivia Dunn sank three 3-pointers and shared game-high honors with 13 points along with sophomore Khloe Dischbein, who was 6-of-8 from the line.

Allysa O’Connor tallied 10 of her 12 points in the first half for the Lady Rebels, who will face Perryville in pool play Thursday for a spot in the final.

Central (2-0) seized immediate control for a 23-3 lead after one quarter, and carried a 43-12 advantage into halftime.

Naylor (2-1) was paced by Hattie Day with 12 points on 6-of-8 free throws. Danielle Shepard finished with nine points, and Harley Sullivan added eight.

The Lady Trojans achieved half of their scoring output in the first quarter, and will face the host school on Thursday for a spot in the title game.

Madison Dunn scored a game-high 27 points, and the Lady Indians topped Jefferson 50-32 in round-robin consolation action at the Valley Tournament.

Bismarck (1-2) was bolstered by the first double-double for Alyssa Brake with 12 points and 14 rebounds, and can finish fifth at the event with a victory over Bourbon on Friday.

DE SOTO, Mo. – The North County defense limited Cape Central to 19 second-half points on Monday evening to prevail 53-42 in the first round of the Fountain City Classic.

Junior guard Layne Wigger scored a varsity high 28 points for the Raiders, who surged following a 23-21 halftime deficit in their season opener.

North County (1-0) will face top-seeded University City in the semifinals on Friday night.

Rudy Flieg added 15 points as the Dragons shrugged off early turnovers and made enough free throws down the stretch to hang on.

Ste. Genevieve (1-0) was 12-of-17 overall from the line, and will face conference rival Farmington in the semifinal round on Thursday at Sullivan High School.

Ricky Hunter dropped in 13 points, and Carter Klump added eight to the victory.

POTOSI – Playing its first official game in more than two weeks, the Farmington girls basketball team needed an entire half to regain its stride.

STE. GENEVIEVE – St. Vincent erased an entire 18-point deficit after being thoroughly outplayed during the first half by host Valle Catholic.

Valle Catholic forward Emma Christine gets behind the St. Vincent defense for a transition layup during the second quarter of a Valle Catholic Tournament game on Monday night in Ste. Genevieve.

St. Paul forward Riley Petty (15) looks to pass against a Ste. Genevieve double team by Chloe Staffen (33) and Alli Byington (3) during the third quarter of a Valle Catholic Tournament game on Monday night in Ste. Genevieve.

Valle Catholic forward Madelyn Griffard (14) tries to reel in a high entry pass during the fourth quarter of a Valle Catholic Tournament game against St. Vincent on Monday night in Ste. Genevieve.