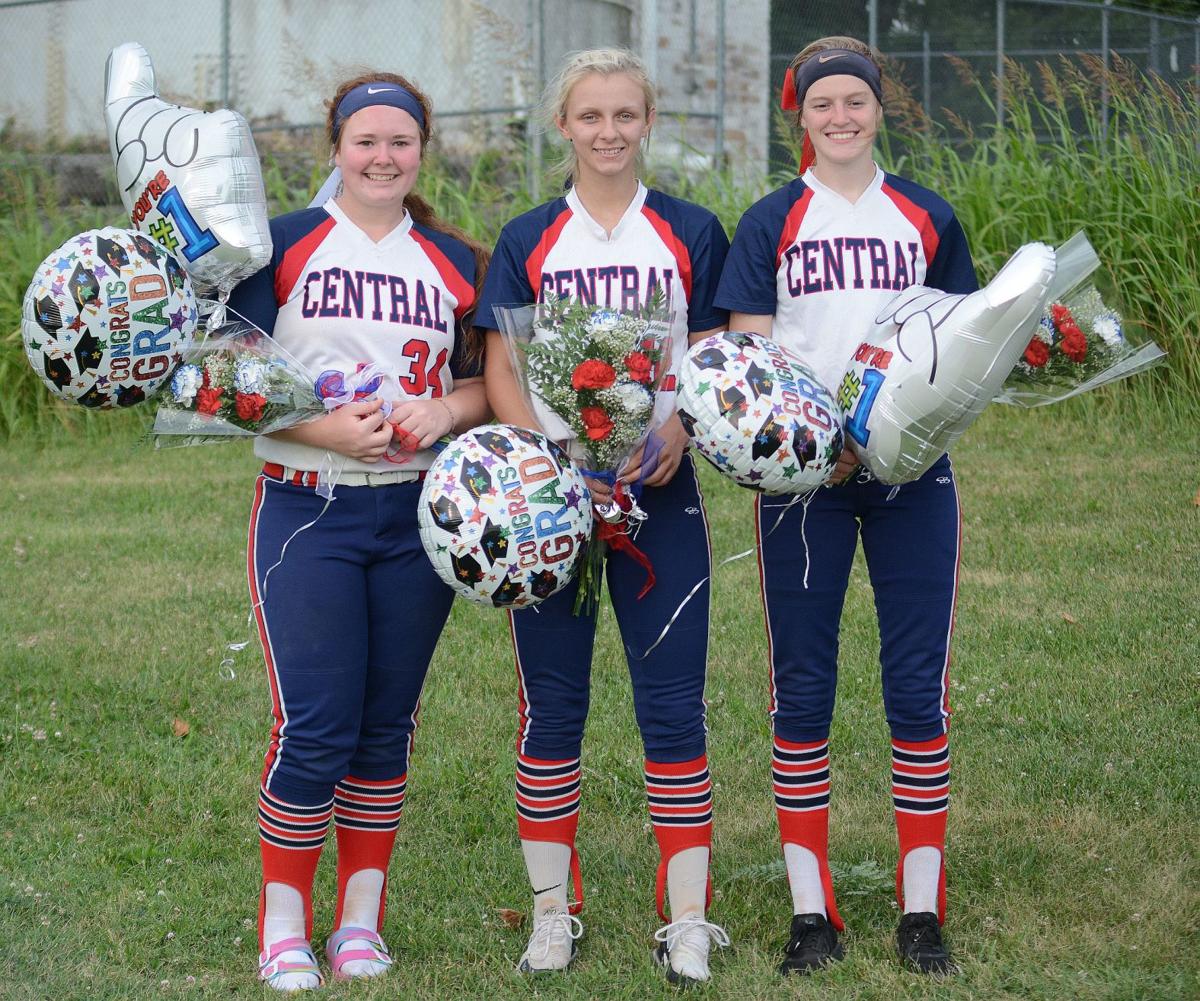 From left, recent Central softball graduates Millie McDowell, Abby Holmes and Abbie Mendenhall pose with their gifts between exhibition games against Ste. Genevieve and Perryville on Monday in Park Hills. 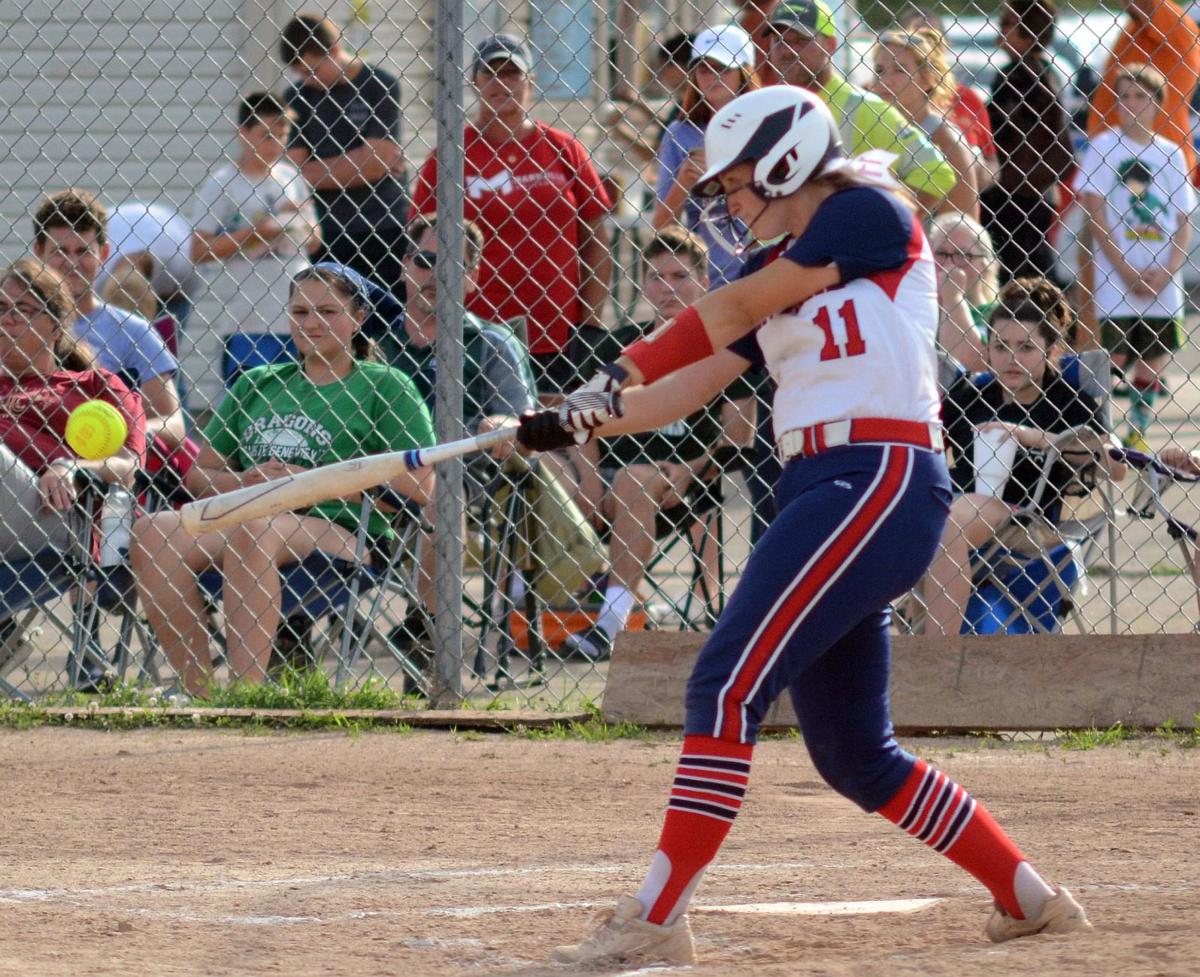 Central batter Taylor Marler (11) connects for a leadoff single during third inning action in an exhibition softball game against Ste. Genevieve on Monday. 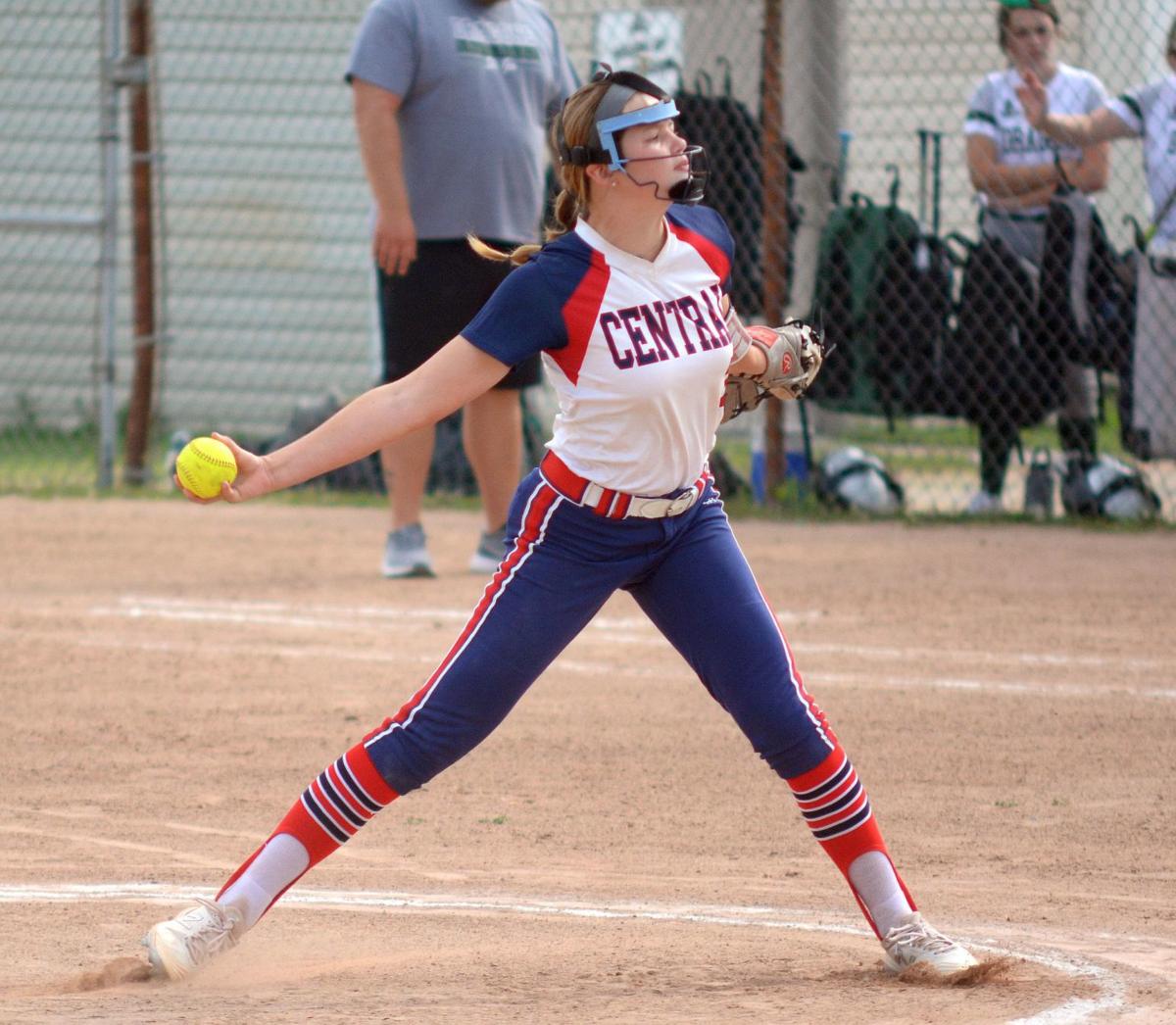 Central pitcher Allie Kelly works during the second inning against Ste. Genevieve in an exhibition softball game on Monday. 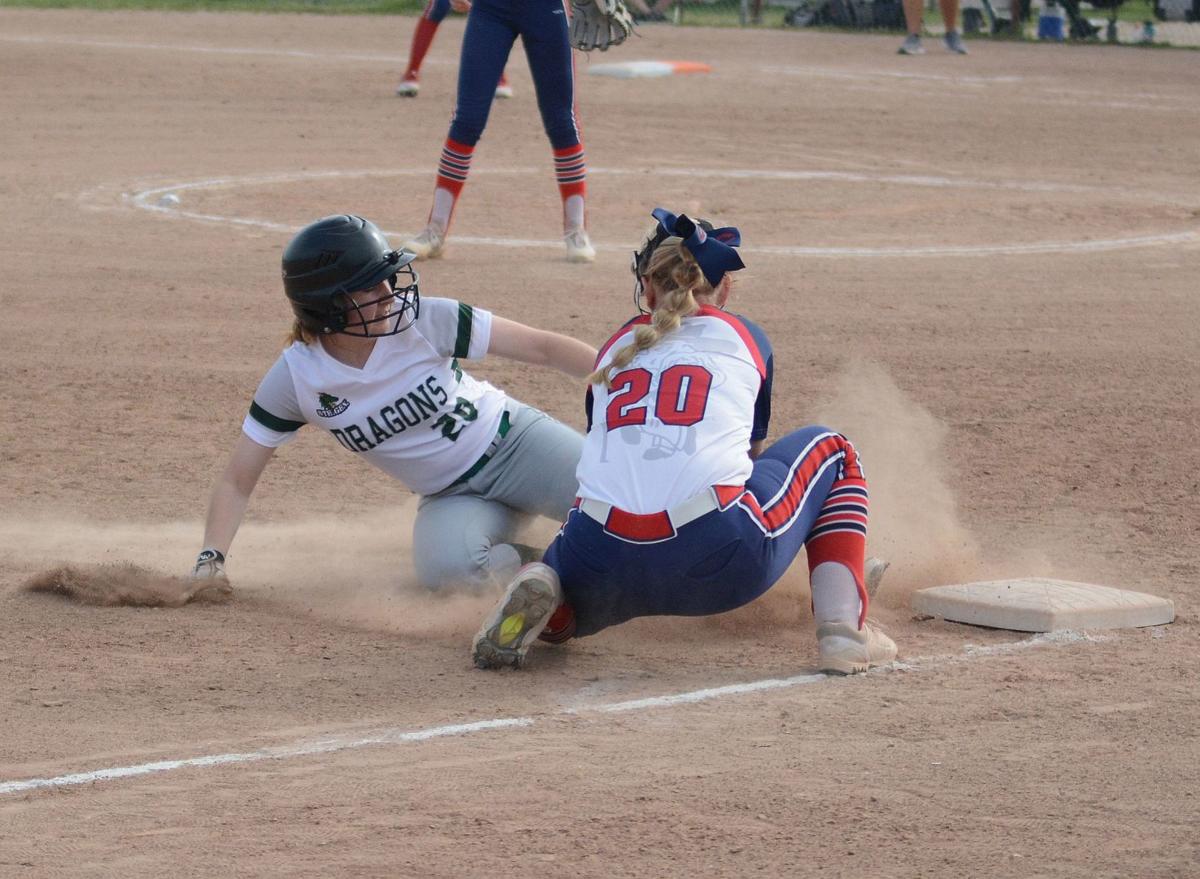 Ste. Genevieve runner Morgan Schwent advances safety with a slide as an incoming throw fails to reach Central third baseman Chloe Coppedge during the third inning of an exhibition softball game on Monday. 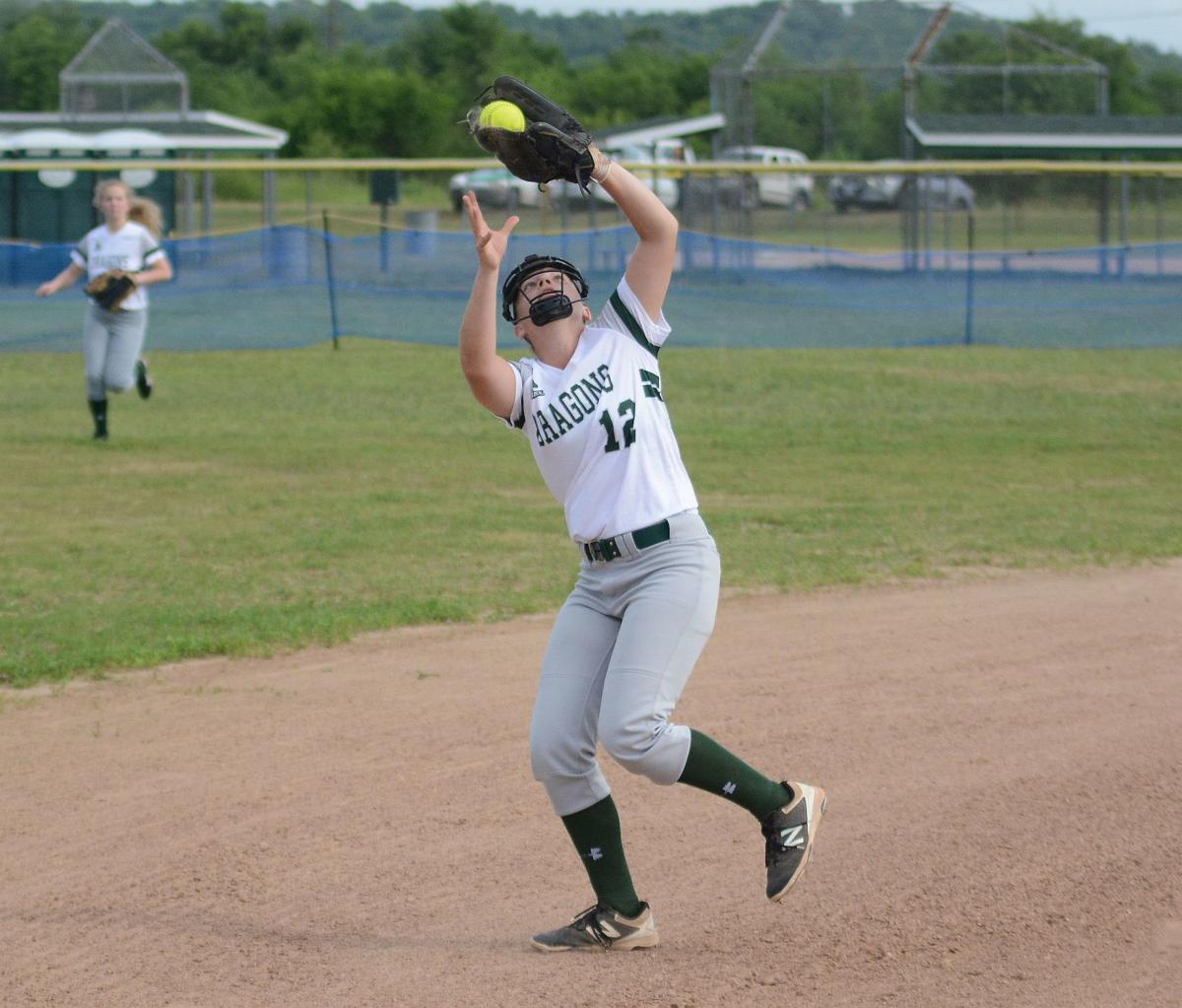 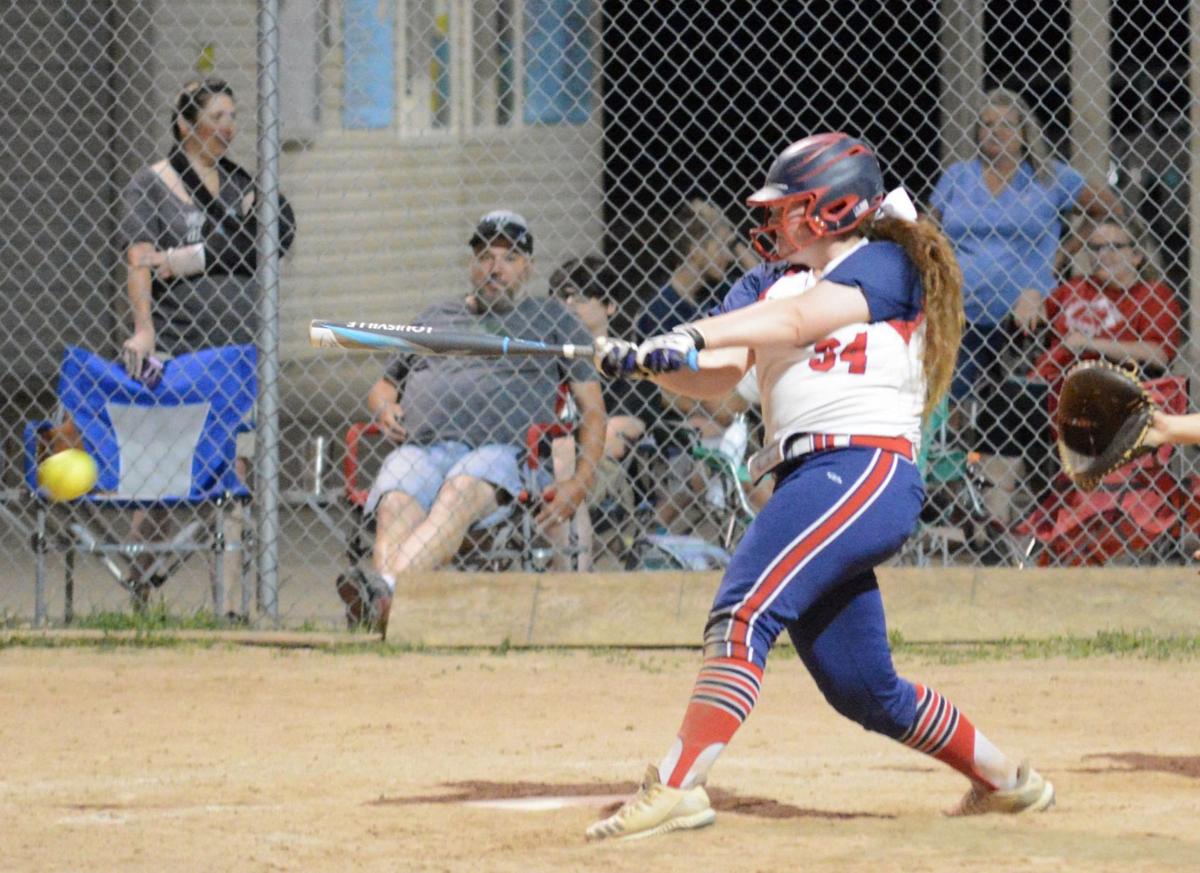 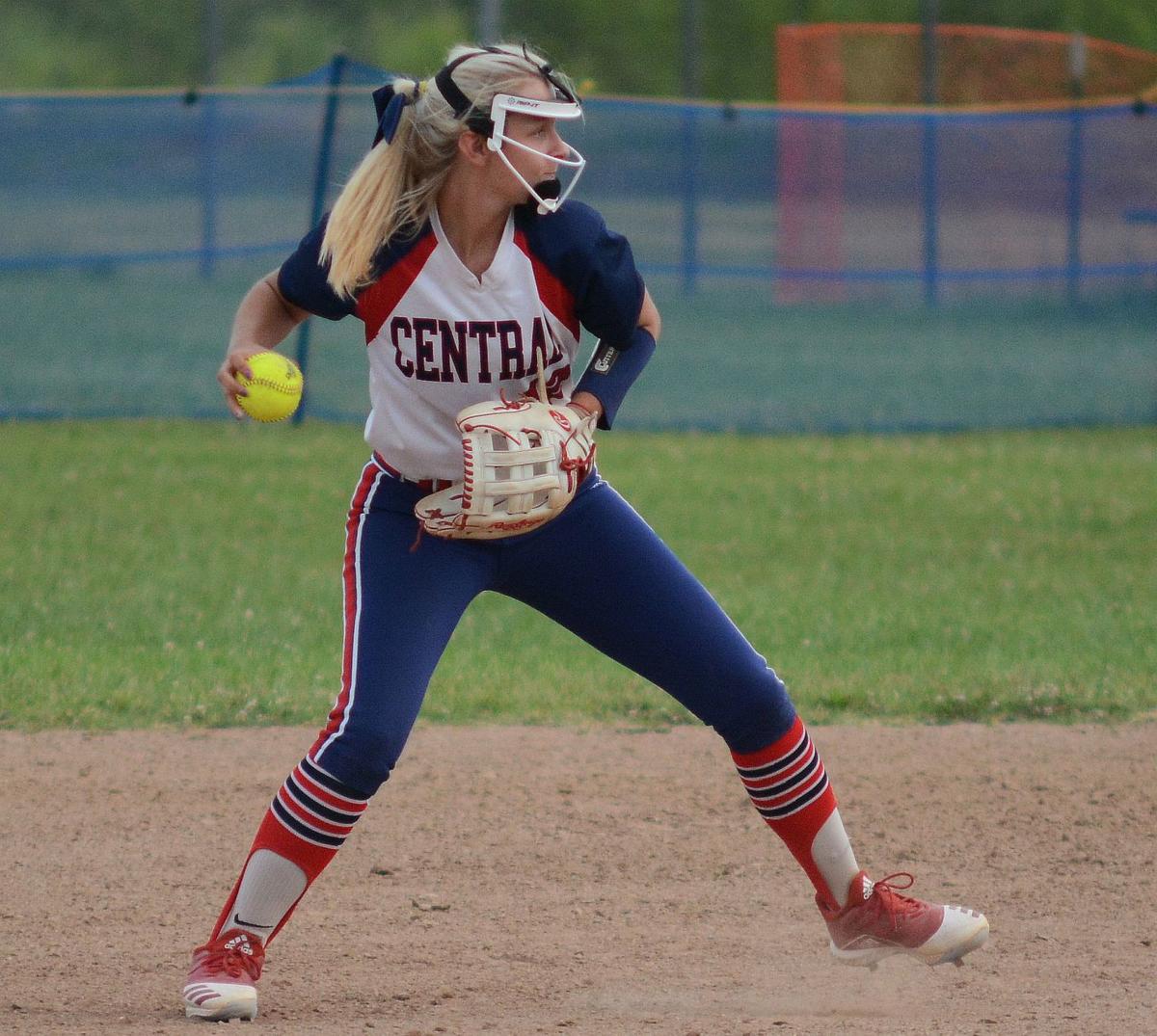 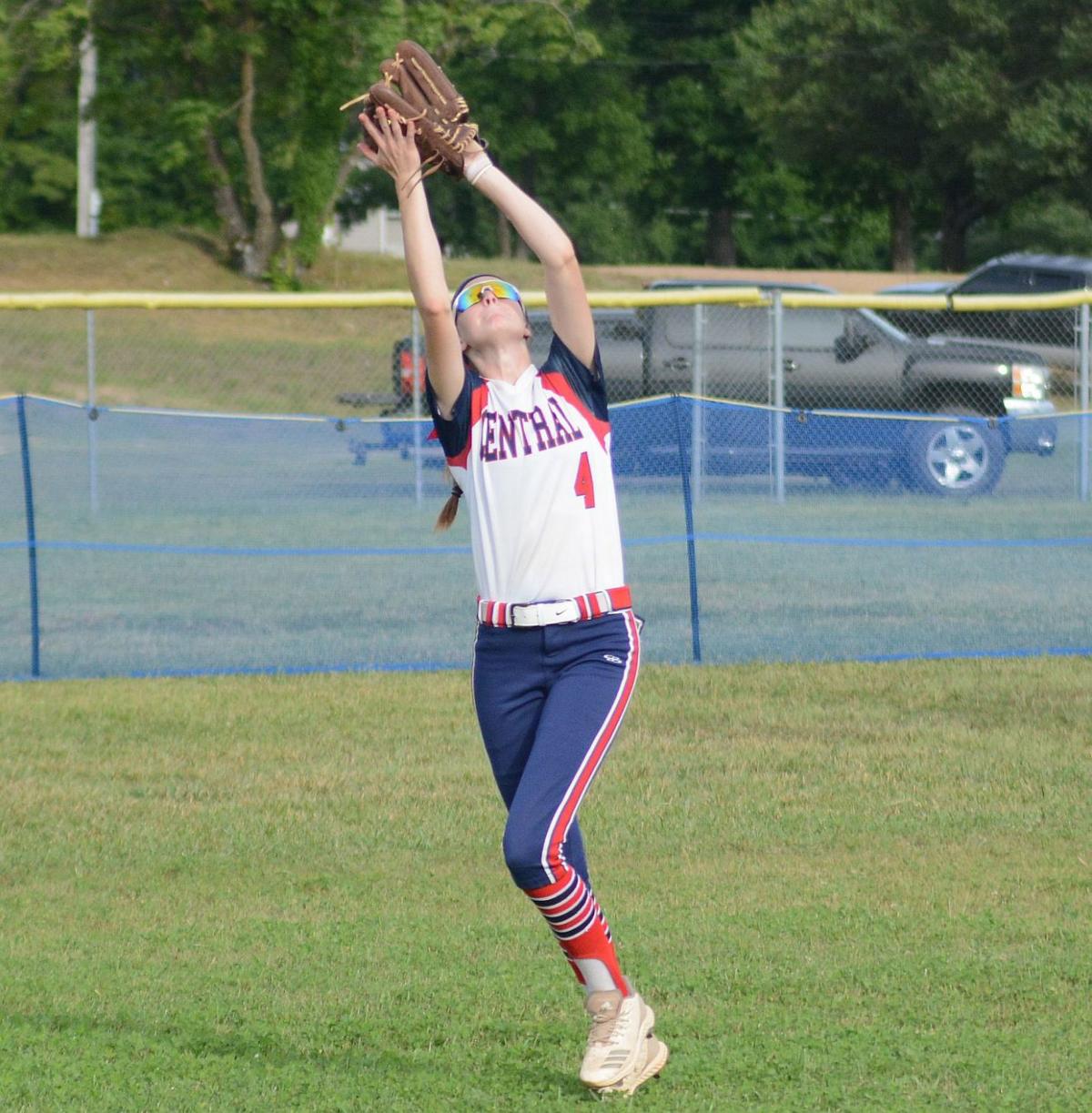 PARK HILLS – Several local schools are utilizing part of the summer break to offer athletic programs a chance to recover part of a spring season that never transpired due to the COVID-19 pandemic.

The Central softball team had its turn Monday, as recent graduates Millie McDowell, Abbie Mendenhall and Abby Holmes were celebrated with a final evening together at their home field.

The Lady Rebels invited Ste. Genevieve and Perryville for an exhibition tripleheader with relaxed rules such as extra lineup spots, free substitutions and a 90-minute time limit per contest.

Central prevailed over Ste. Genevieve 6-2 in the opener before Perryville swept both the Dragons 11-6 and Lady Rebels 12-7 in outcomes that will not be officially recorded.

Upcoming senior center fielder Aubree Eaton ripped a two-out, two-run single for insurance in the fifth and last inning to punctuate a three-run rally for Central against Ste. Genevieve.

The three departing Lady Rebels – each planning to continue at the collegiate level – strung consecutive hits together while extending a fragile 3-2 lead.

Holmes singled from each side of the plate while matching McDowell at 2-for-2 plus a walk. Mendenhall singled home Taylor Marler ahead of a tie-breaking error in the third inning.

Allie Kelly, who earned all-state honors as a freshman outfielder last year, compiled 10 strikeouts while going the distance in the circle. She tossed a three-hitter and walked three.

Ste. Genevieve produced its only runs in the top of the third. Chloe Walker, Alyssa Huber and Lexi Bova connected on three straight singles for a 2-1 edge after a fly ball was dropped.

Kelly went on to retire eight of the next nine batters, and her teammates tallied five unanswered runs. Addison Miller and Marler added singles for the Lady Rebels.

Dragons hurler Faith Lincoln worked around a bases-loaded threat during the opening frame, but Holmes crossed the dish on a wild pitch after drawing a free pass in the second.

Huber, who signed with Mineral Area prior to Christmas, did not pitch in either Ste. Genevieve game while protecting an injured left knee.

Katie Roberts and winning pitcher Alyson Stortz finished 2-for-2 at the plate, and Perryville capitalized on eight errors by a Central in the nightcap.

The Lady Pirates notched one hit among nine batters in the third inning, but still scored four times with the assistance of four miscues and two walks.

Stortz registered eight strikeouts over five innings, and allowed seven runs on 10 hits. She was staked to a 5-0 advantage midway through the third.

Central suddenly fired back with three runs amid a two-out rally after Eaton sparked it with a single. Marler tripled to right, Chloe Coppedge doubled to left-center and McDowell doubled to right-center for sharp RBI swings on three consecutive pitches.

Perryville restored a 9-3 lead in the fourth as Breanna White, Roberts and Brittanie Stewart delivered RBI singles with two outs.

Makayla Pecaut and Julie Morris came home on wild pitches in the fifth, and the visitors totaled seven unearned runs against Marler, who allowed nine hits and five walks while fanning four in a complete game.

Addison Miller grounded a two-run single in the Central fourth, and McDowell did likewise in the fifth while finishing 2-for-2 overall.

Kelly hammered two doubles to the left-field fence in three plate appearances for the Lady Rebels. Mendenhall and Holmes chipped in singles.

Substitute second baseman Ella McClanahan turned a double play with Holmes up the middle in the top of the fifth before the next five Lady Pirates reached.

Stewart shined at shortstop for Perryville by starting two double plays of her own. Her sprawling catch and alert throw from her knees to first base ended the night.

Central loaded the bases with no outs in the second, but Stewart smothered a ground ball to her left, stepped on the bag and threw to escape the threat as Miller was denied a potential two-run single.

Brooke Huber went 3-for-3 with four RBI and three runs scored, and Perryville scored four times in both the third and fourth innings during the middle game on Monday evening.

Roberts notched two strikeouts through four innings for the win, and did not surrender a hit after the opening frame concluded in a 3-3 deadlock.

Alyssa Huber finished 2-for-2 plus a walk while Brynna Wehner and Bova collected singles. Brittney Kreitler tossed a scoreless inning after Wehner allowed 10 hits through four in defeat.

Sunnie Roderique was 2-for-3 with a pair of RBI singles for Perryville, which played its state sanctioned softball last fall.

The same three teams will participate in another round-robin series on Wednesday with Ste. Genevieve honoring its seniors while serving as host.

From left, recent Central softball graduates Millie McDowell, Abby Holmes and Abbie Mendenhall pose with their gifts between exhibition games against Ste. Genevieve and Perryville on Monday in Park Hills.

Central batter Taylor Marler (11) connects for a leadoff single during third inning action in an exhibition softball game against Ste. Genevieve on Monday.

Central pitcher Allie Kelly works during the second inning against Ste. Genevieve in an exhibition softball game on Monday.

Ste. Genevieve runner Morgan Schwent advances safety with a slide as an incoming throw fails to reach Central third baseman Chloe Coppedge during the third inning of an exhibition softball game on Monday.