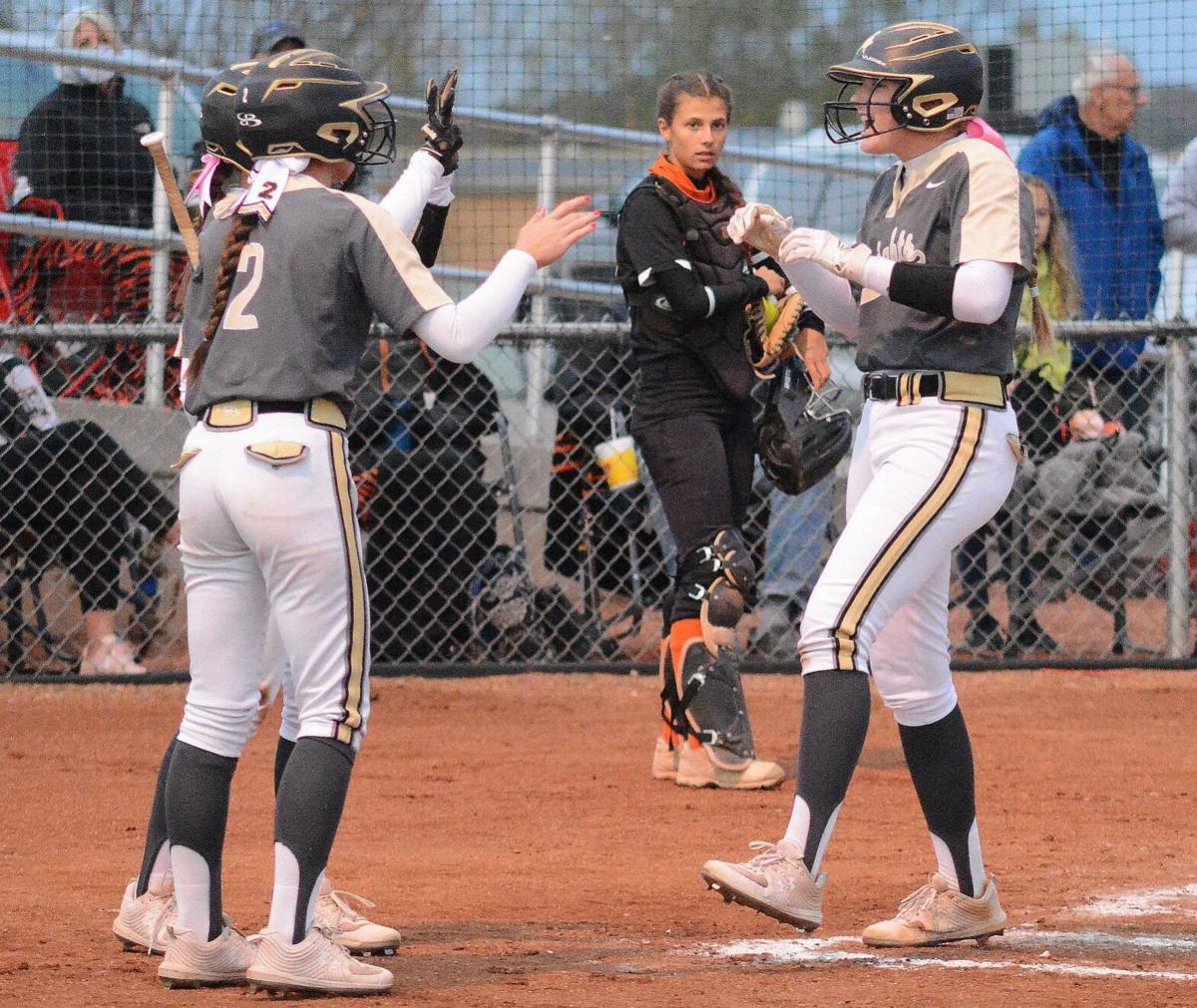 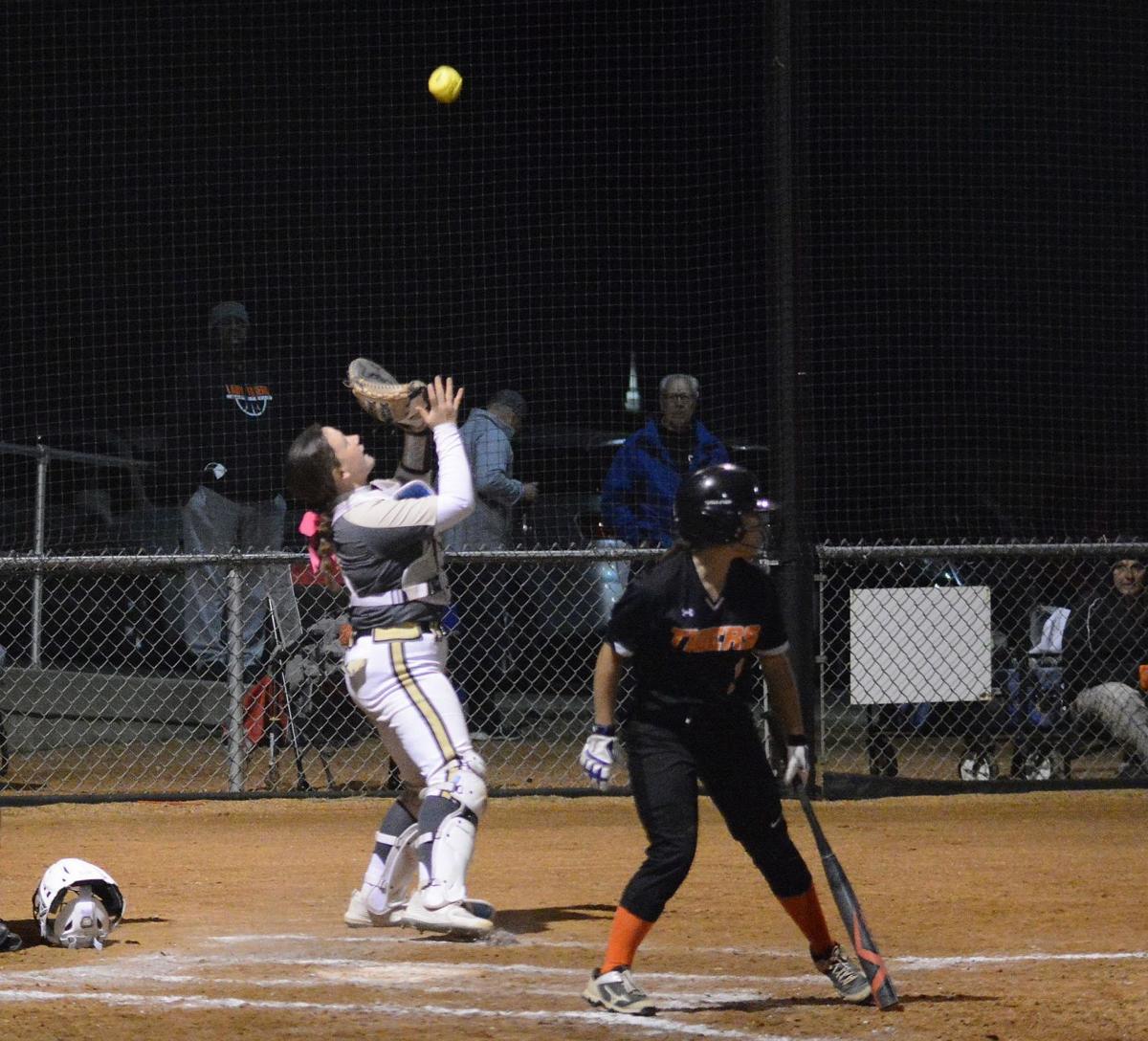 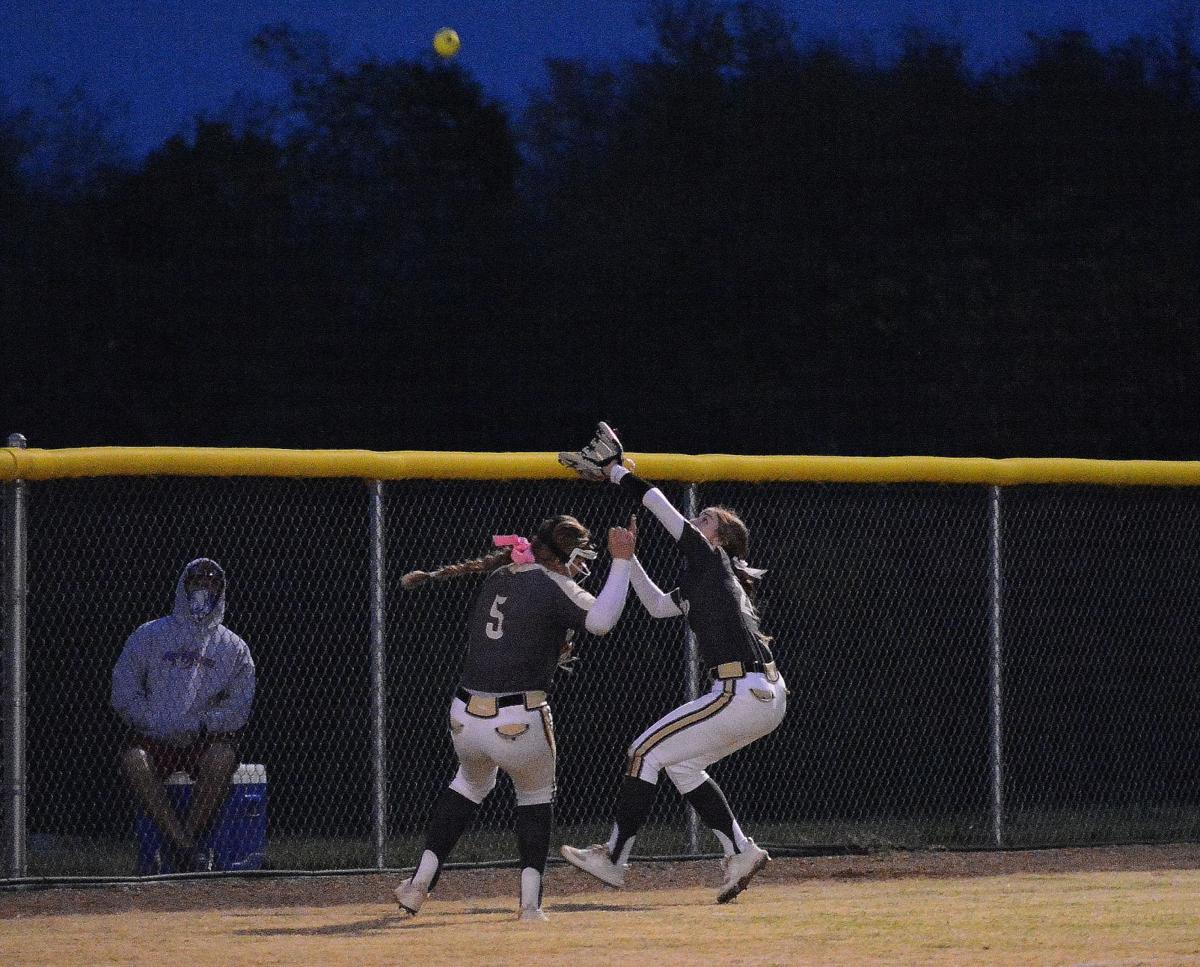 Farmington left fielder Jayce Jarvis reaches up to catch a foul ball near near the fence in foul territory as shortstop Angelia Davis (5) avoids colliding with her during third inning against against Cape Central in a Class 4, District 1 softball semifinal game on Thursday in Bonne Terre. 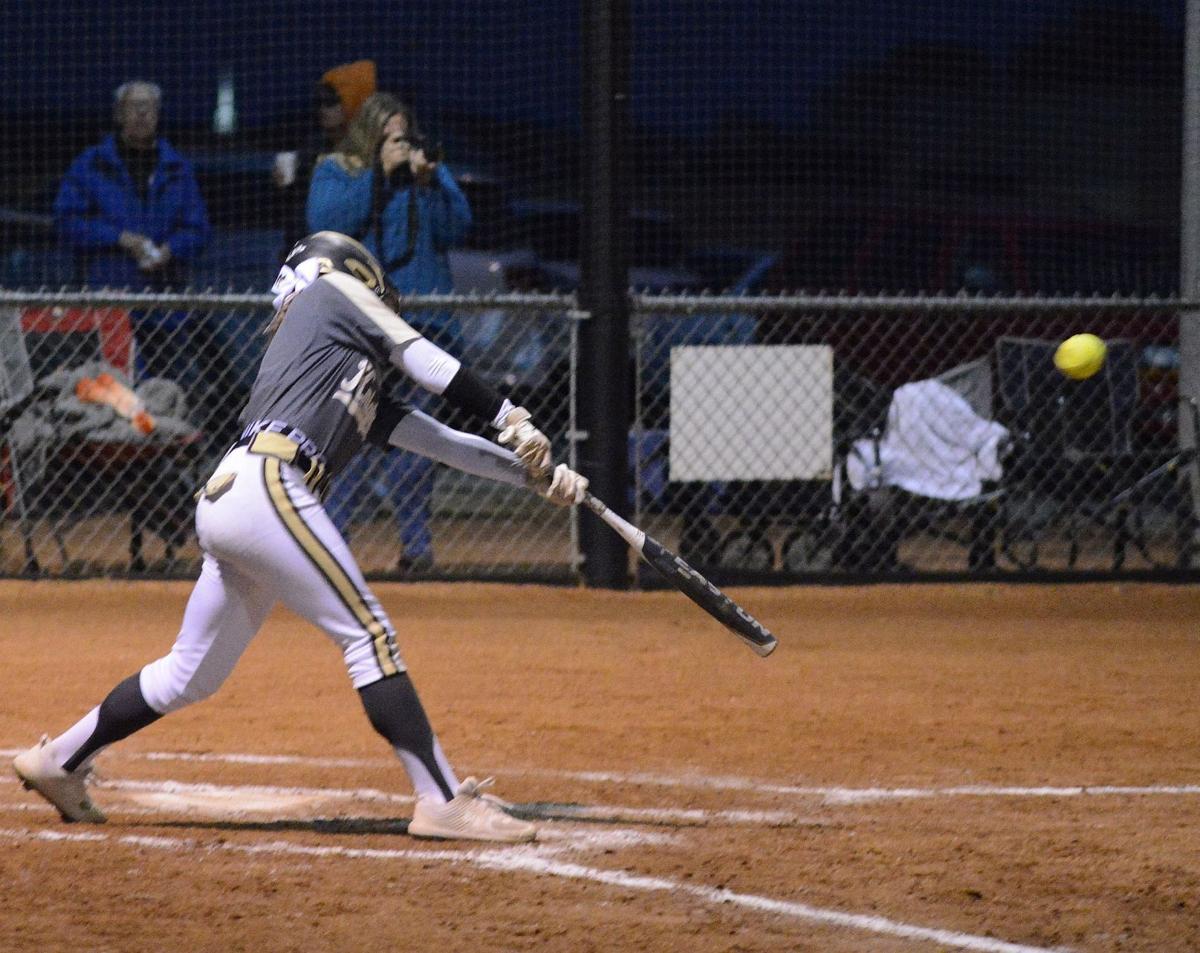 Farmington junior Courtney Swink guides an RBI single over the Cape Central infield during the third inning of a Class 4, District 1 softball semifinal game on Thursday in Bonne Terre. 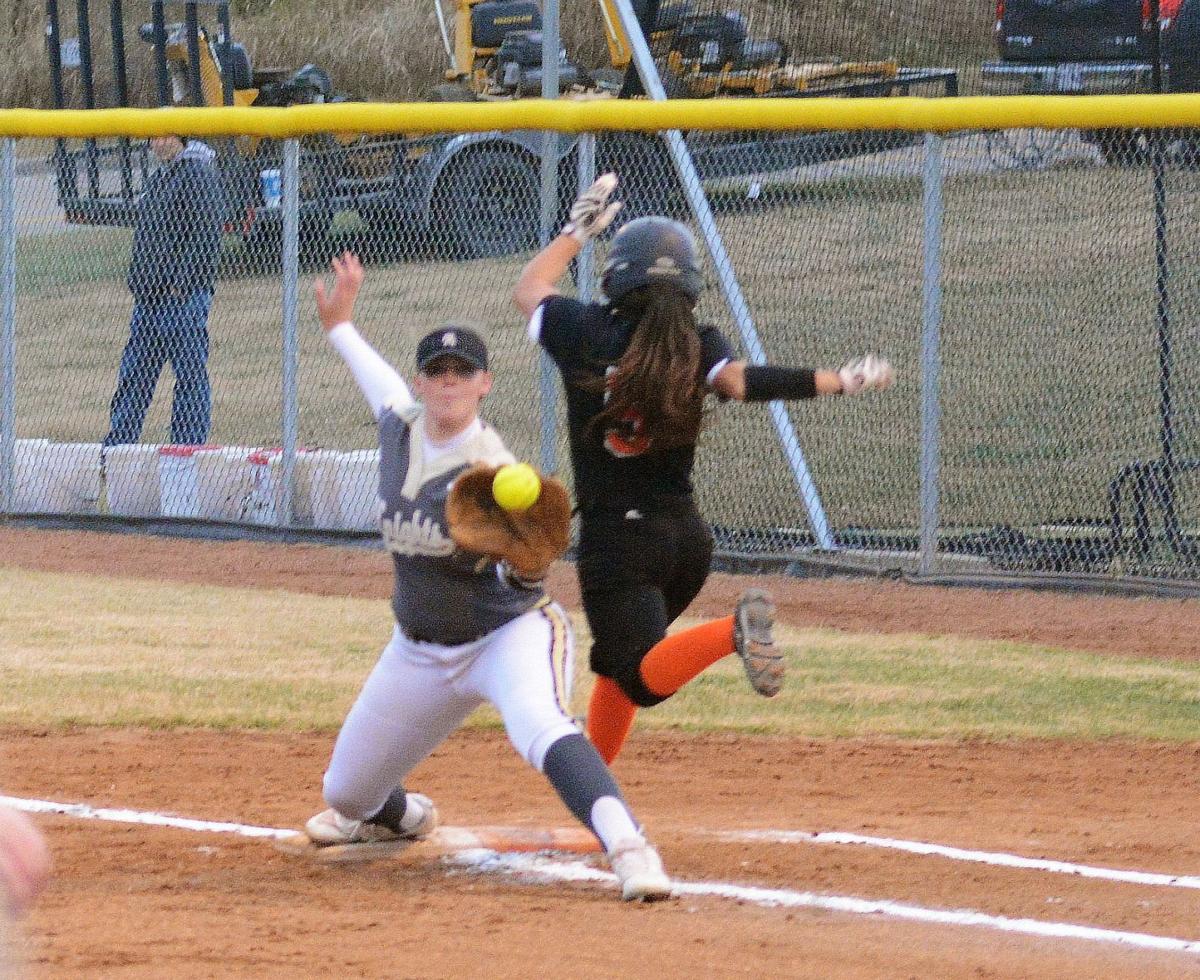 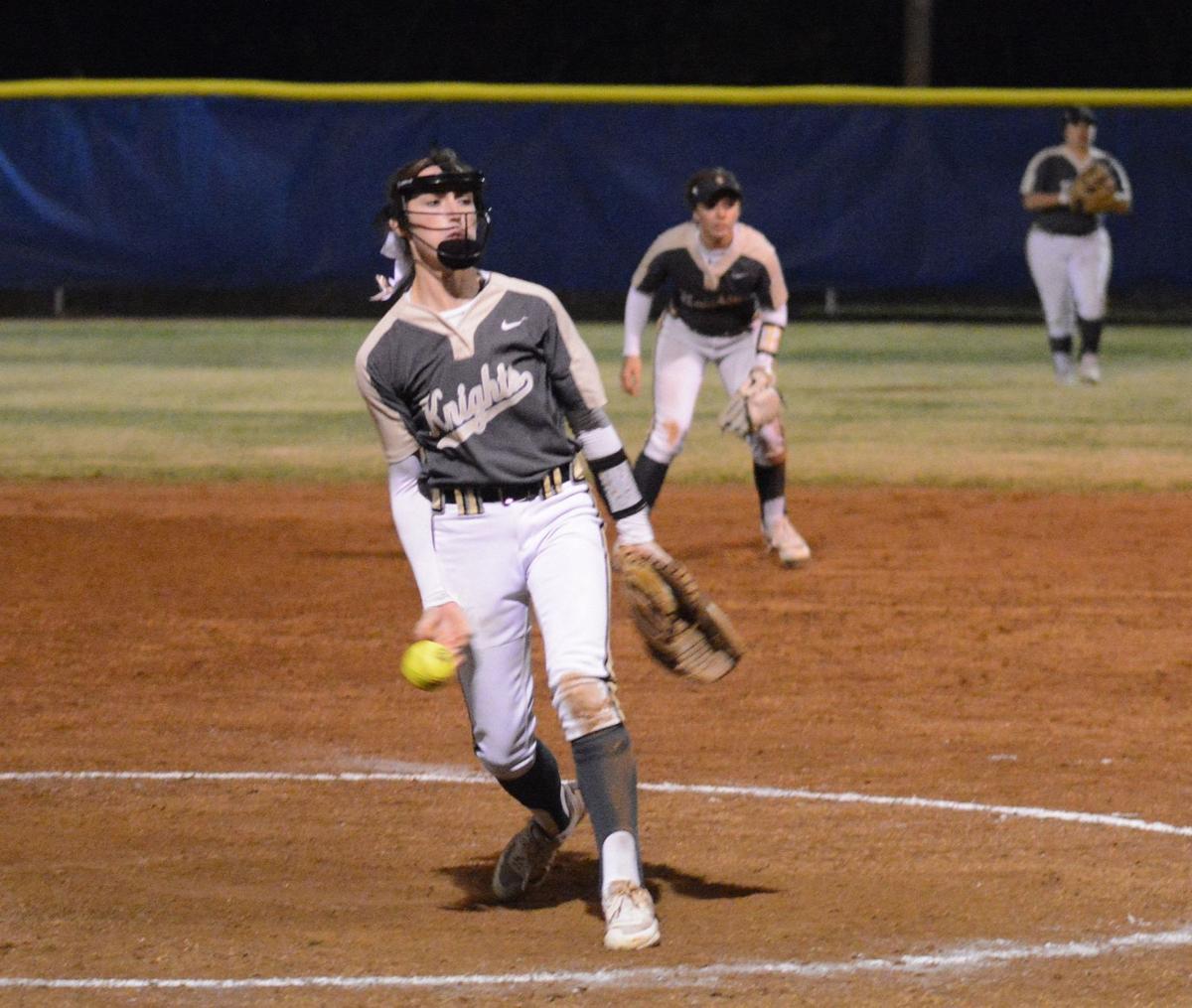 The Knights produced double-digit runs for the seventh occasion during their current nine-game win streak, and eliminated Cape Central 10-1 in the Class 4, District 1 semifinal round.

Abby Robbins scattered four hits and notched five strikeouts while throwing her eighth complete game of the fall, and was backed by excellent defense.

Farmington (19-11) will chase the title Friday at 4:30 p.m. against top-seeded Hillsboro, which blanked Sikeston 11-0 in the earlier semifinal.

Davis was among four Knights to record multiple hits, and connected in the bottom of the first inning after opposing hurler Elizabeth Turk grazed leadoff batter Jayden Tucker with an inside delivery.

Freshman Shelby Bowling shifted from right field to third base, and moved up another spot in the batting order to sixth after going 3-for-3 in her last outing. She pushed the early lead to 4-0 with a two-run single.

Farmington would strand the bases loaded with a chance to inflict more damage in the opening frame, but were never threatened with Robbins sharp in the circle.

The junior right-hander worked around an eight-pitch walk to Brooke Witvoet and two-out single by Catherine Davis in the top of the first. She then fanned three batters in the second.

The Knights broke the contest open with five runs in the third as darkness crept over the field. The rally began when Turk walked Jayce Jarvis and Bowling back to back.

Courtney Swink looped an RBI single into shallow left-center, and Tucker made it 7-0 with a sharp RBI single to left after Alayna Resinger drove in a run on a ground out.

Robbins cleared the bases with a two-run double off the fence against reliever Valerie Greenley, and the margin became insurmountable for the third-seeded Tigers.

Catherine Davis paced Cape Central (17-12) at 2-for-3 overall. She singled and scored her team’s lone tally on a ground out by Lauren Hamby after advancing on Greenley’s hit in the fourth inning.

Although the Tigers made some solid contact against Robbins, the Farmington defense was equal to the task. Jarvis raced deep into foul territory for an excellent running catch in the third.

Catcher McKennah Wallace alertly caught a bunted pop-up, Davis made a stellar backhand stop in the hole for the second out, and Tucker snared a stinging liner during a clean fifth.

Robbins ultimately retired 11 of her last 12 batters, and calmly fielded the clinching out herself. She bolstered the offense by going 2-for-4.

Farmington was unable to invoke the 10-run rule as shortstop Ki Bogan made a nifty stop and strong throw to force a seventh inning with two runners aboard.

Jarvis was erased on a double play after beginning the Knights’ fourth with a bullet single up the middle. Swink followed with an opposite-field triple - only the Knights' third all season – and later walked to likewise finish 2-for-3.

Bowling reached on an error, and crossed the plate on Makenna LaChance’s ground ball in the sixth. Wallace singled and scored along with Jarvis for Farmington in the first inning.

Robbins and Swink each provided their 16th stolen bases of the season to continue sharing the team lead.

Farmington earned the higher seed in the tournament bracket by defeating Cape Central 10-3 during a SEMO Conference battle last month.

BONNE TERRE – Shelby Bowling seized an opportunity to crack the Farmington starting lineup earlier this season, and has since worked on improv…

FARMINGTON – With the district playoffs approaching next week, the Farmington softball team has its offense rolling at just the right time.

Farmington left fielder Jayce Jarvis reaches up to catch a foul ball near near the fence in foul territory as shortstop Angelia Davis (5) avoids colliding with her during third inning against against Cape Central in a Class 4, District 1 softball semifinal game on Thursday in Bonne Terre.

Farmington junior Courtney Swink guides an RBI single over the Cape Central infield during the third inning of a Class 4, District 1 softball semifinal game on Thursday in Bonne Terre.