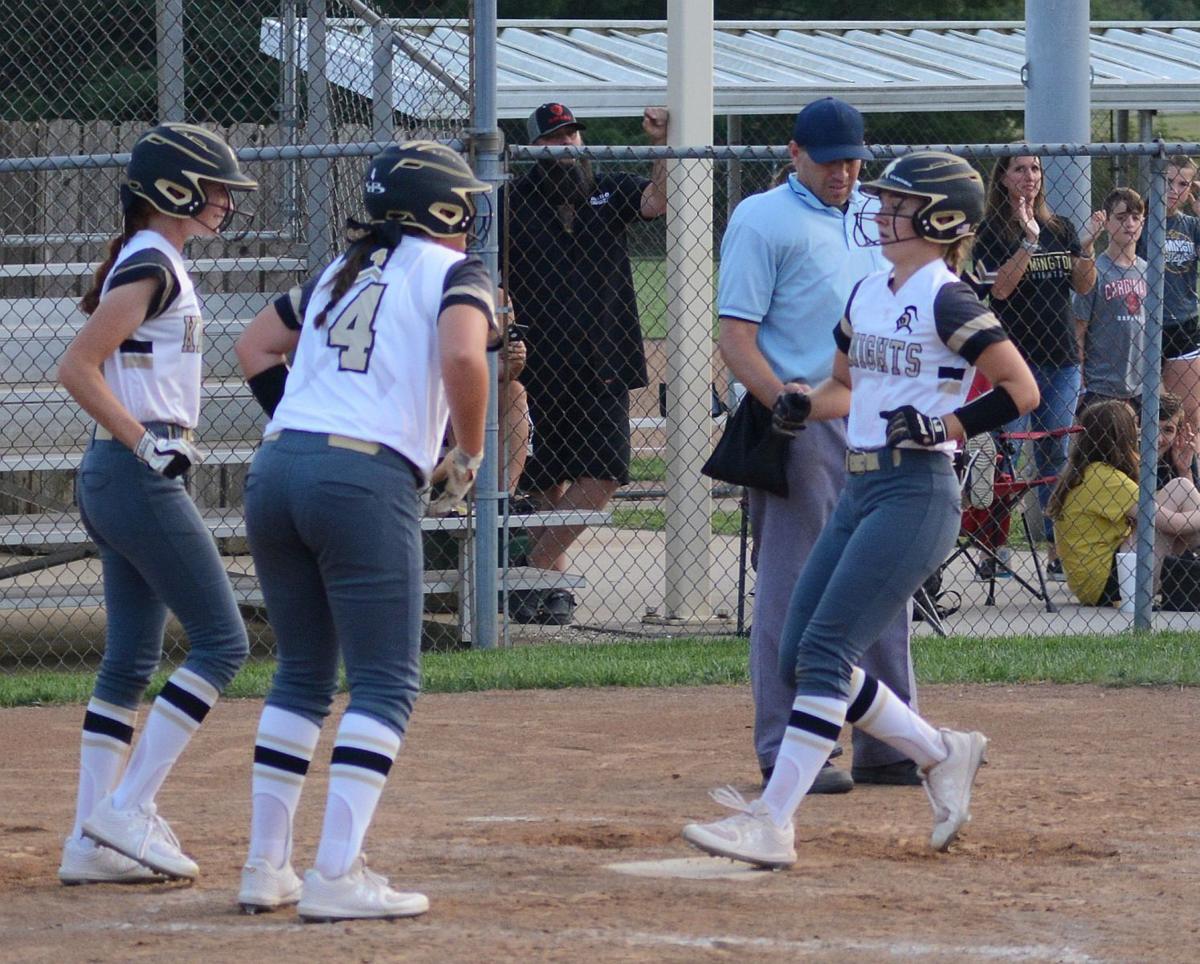 Farmington freshman Jayden Tucker is greeted by teammates Shelby Bowling (4) and Jocelyn Grimes while touching the plate on her three-run home run during sixth inning softball action against Jackson on Wednesday in Farmington. 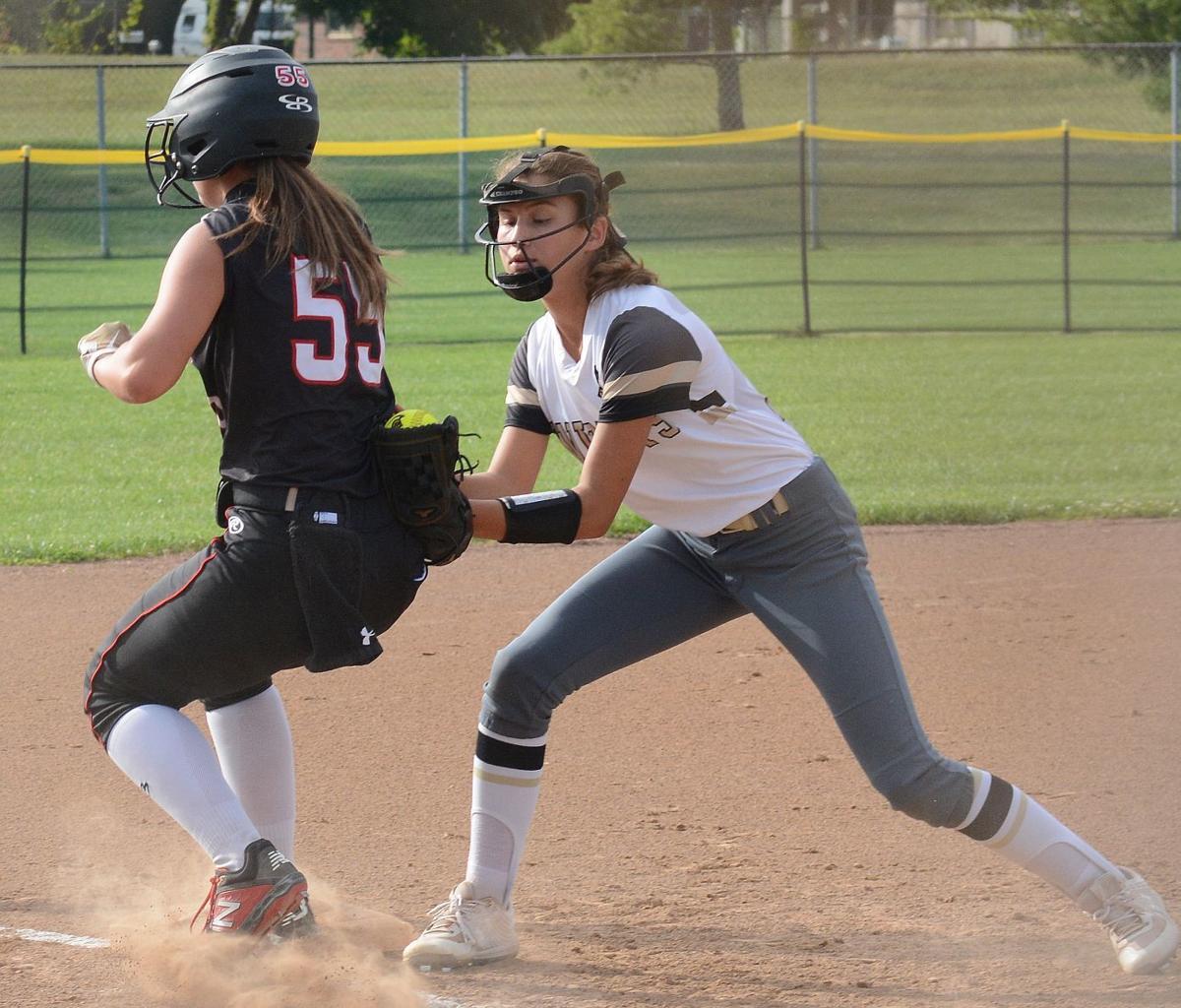 Jackson runner Kylie Darrow (55) scampers back safely on a pickoff throw just before Farmington third baseman Avery Graham applies the tag during the first inning on Wednesday in Farmington. 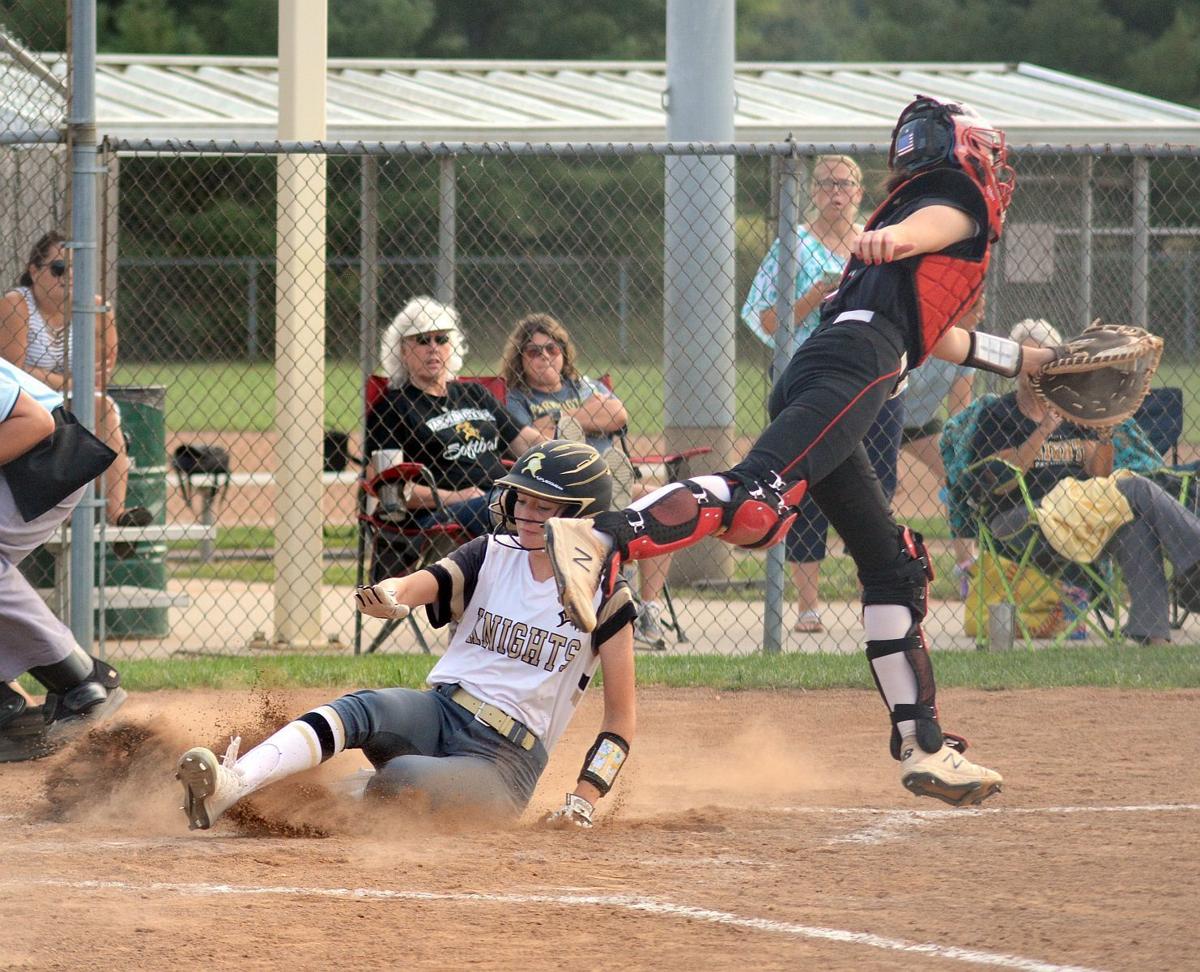 Farmington freshman Jocelyn Grimes slides past Jackson catcher Ainsley Watson on a two-run single by McKennah Wallace in the fourth inning on Wednesday. 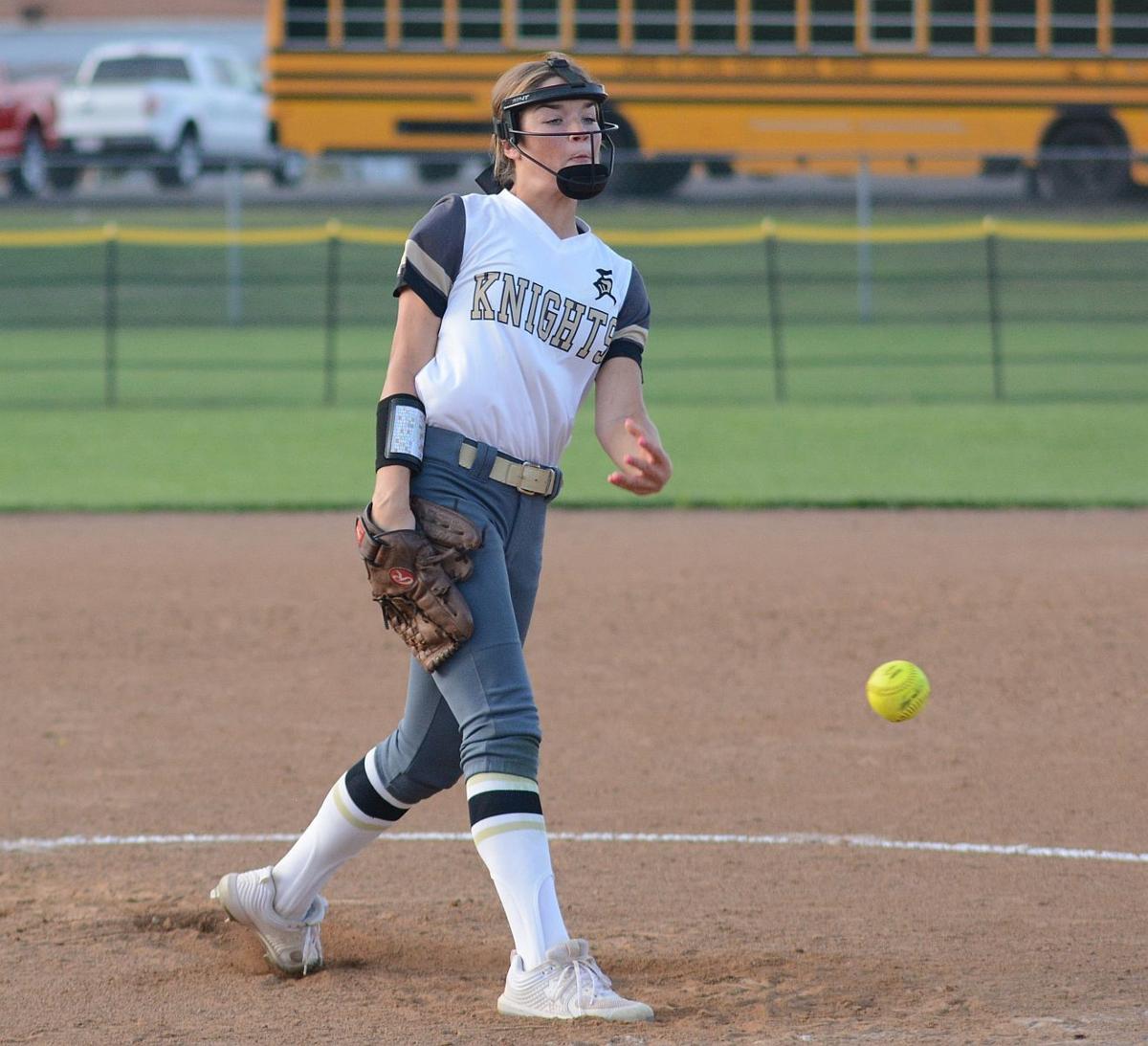 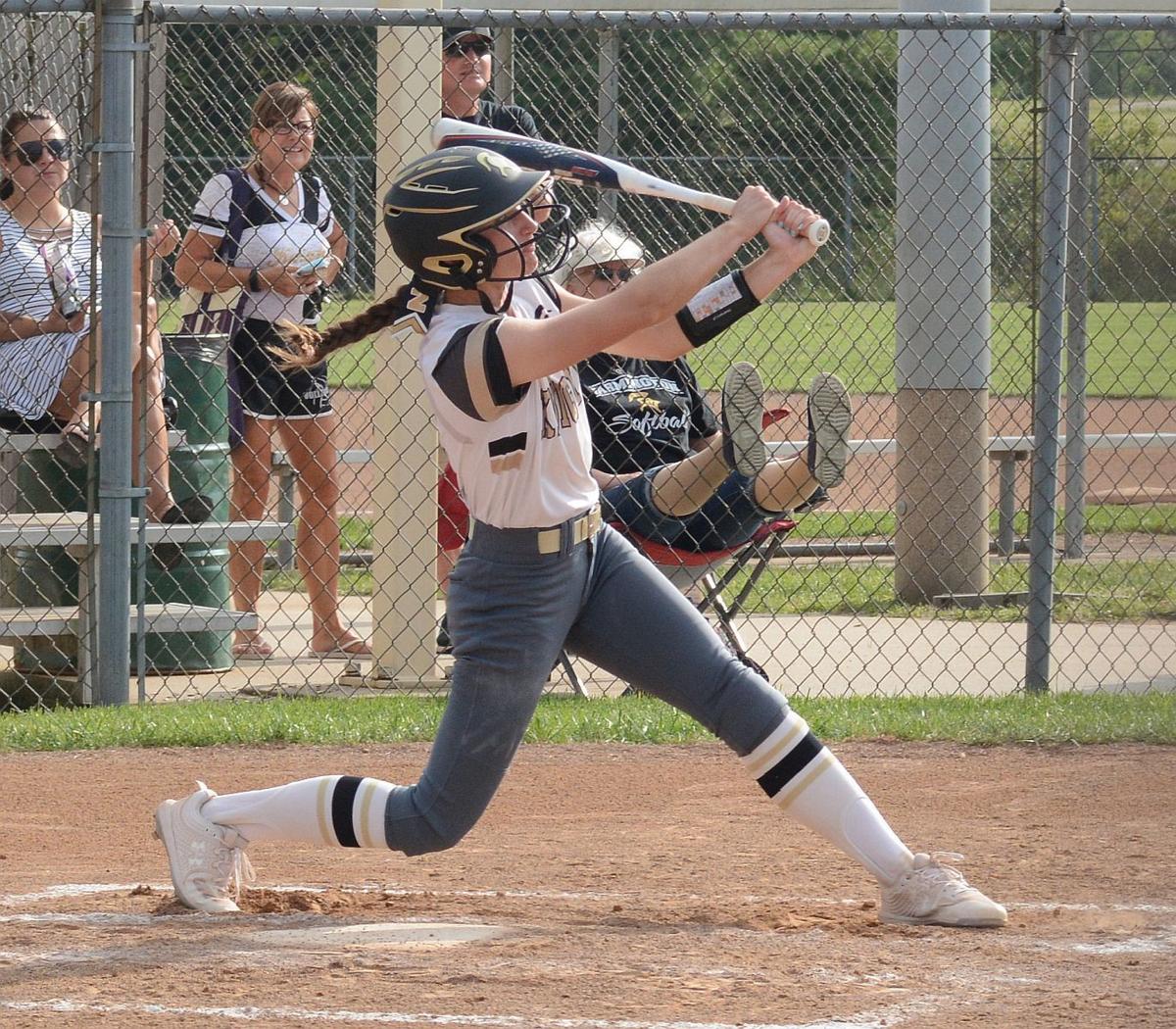 Farmington junior Abby Robbins watches her two-run homer during the first inning against Jackson on Wednesday. 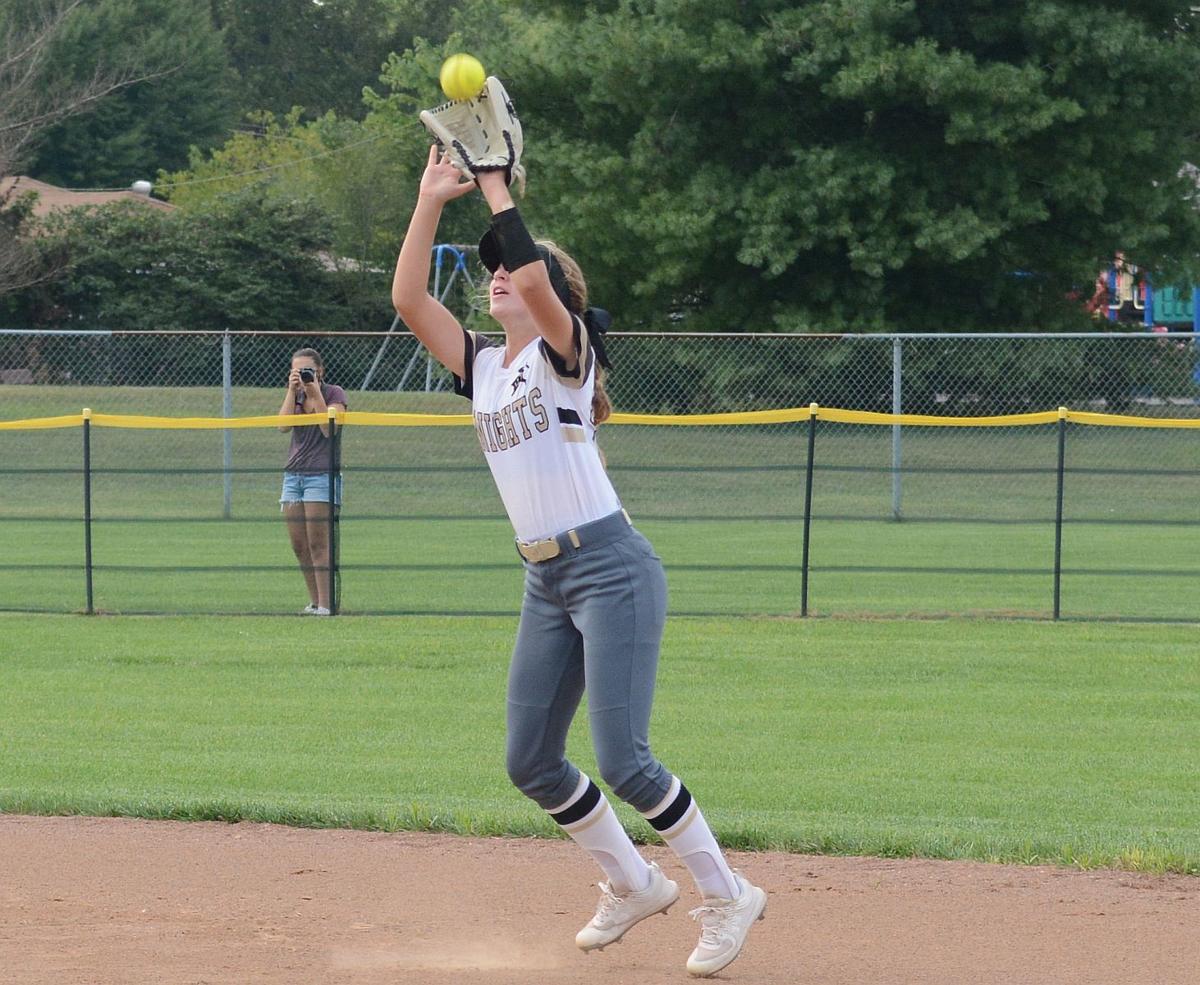 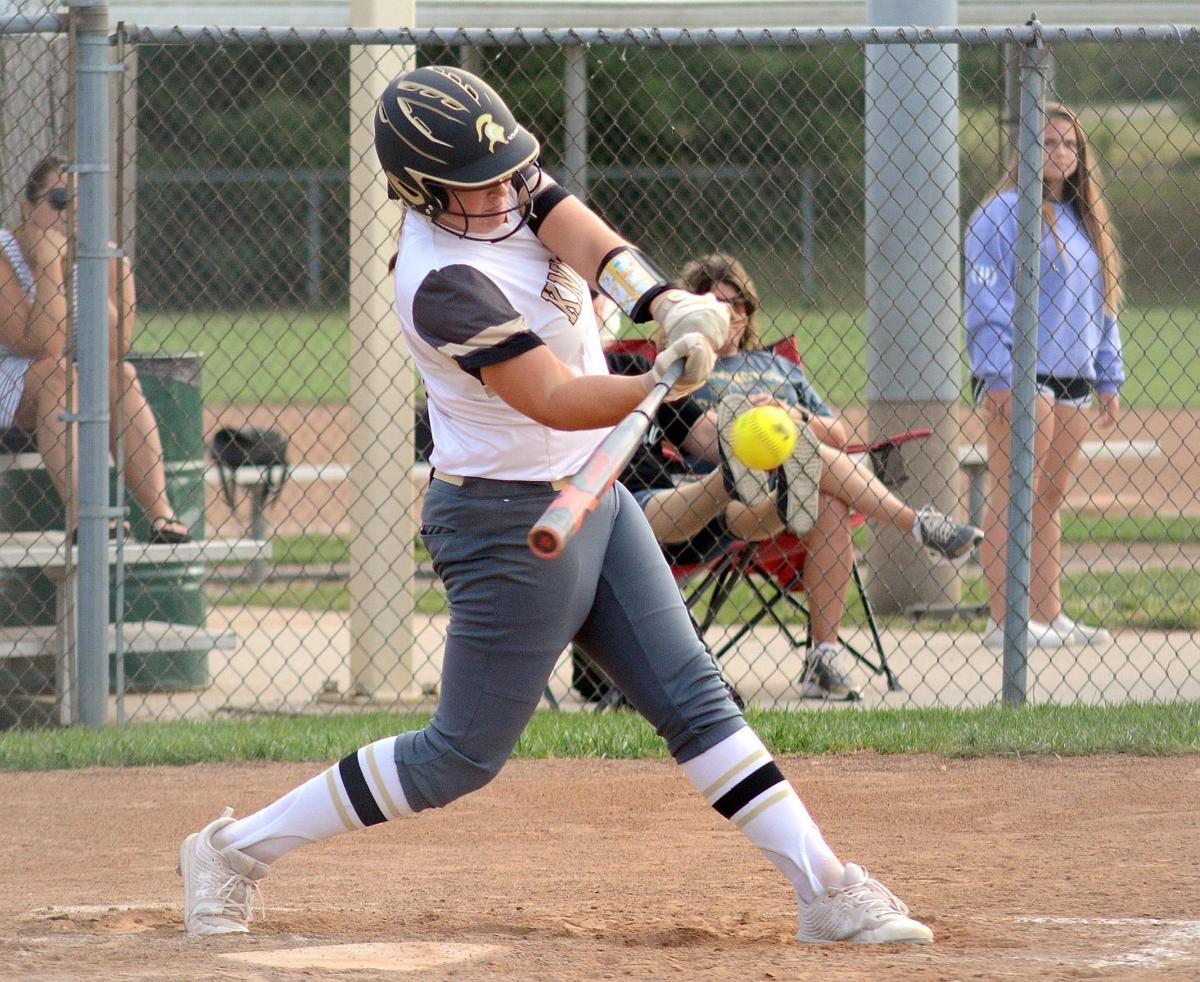 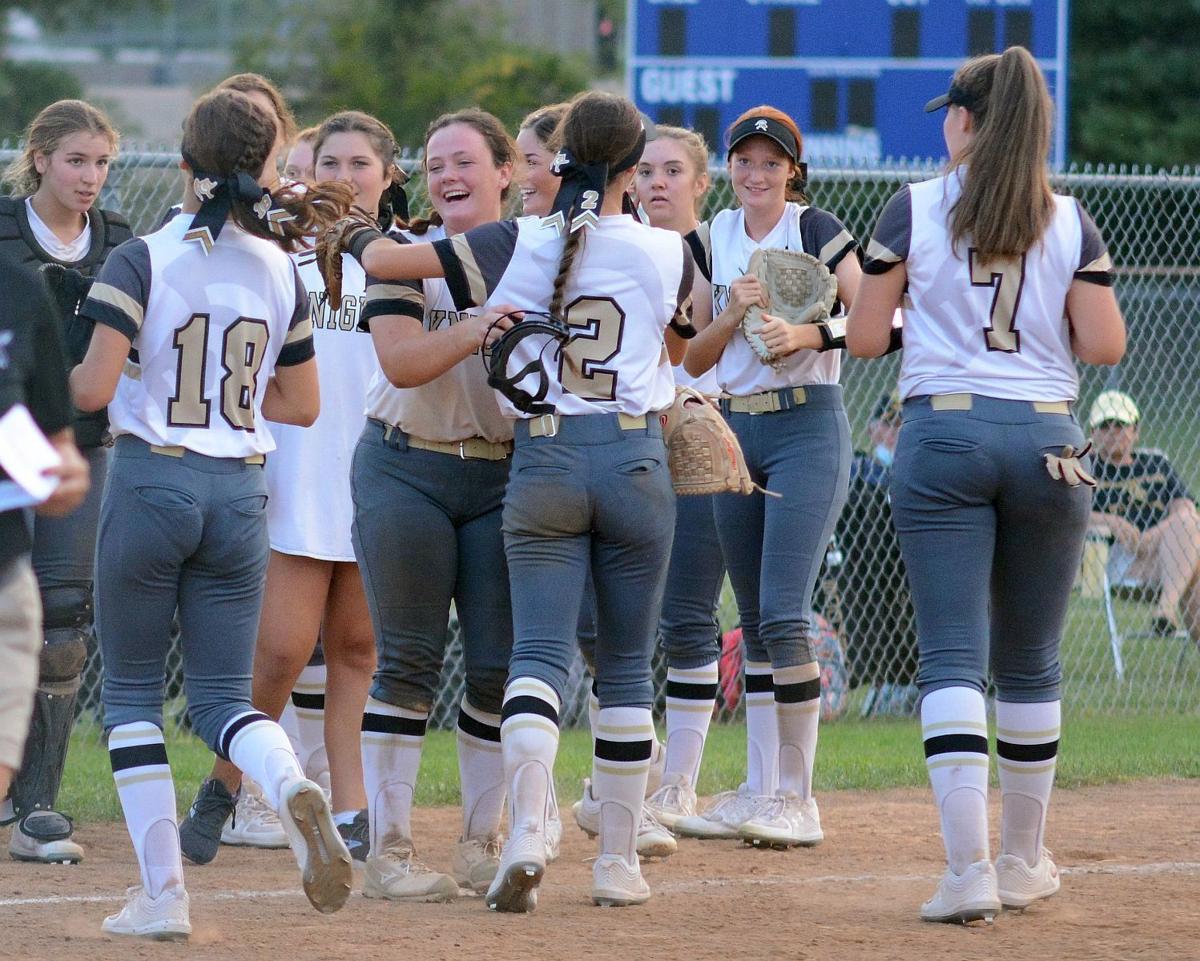 The Farmington softball team experienced its share of trouble on Wednesday afternoon. But much of that was alleviated after one huge swing from its star leadoff hitter.

Jayden Tucker ripped a three-run homer to left-center field in the bottom of the sixth inning, and the Knights celebrated an eventful 11-8 SEMO Conference victory over Jackson.

Shelby Bowling finished 2-for-3 among five freshmen in the starting lineup, and guided a leadoff single through the middle to spark the winning rally against Jackson right-hander Katelyn Carter.

No. 9 batter Jocelyn Grimes joined Bowling on base when her sacrifice bunt included a throwing error, and Tucker stepped to the plate with no outs.

Tucker turned a belt-high offering around for the second home run of her freshman season, and raised her team-high batting average to .442 by going 2-for-4.

Carter left the game three batters later when Courtney Swink sent a scalding liner off her inner thigh after Robbins reached on another error.

Karli Johnson retired her two batters faced to keep the margin at three runs, and the resilient Indians mounted a serious threat in the seventh.

Swink pitched two innings for the win, but only after consecutive singles by Brooke Gerau and Brandi Smythe and a four-pitch walk to Maya Owens loaded the bases.

Robbins, who shifted from the circle to second base, threw home to force the lead runner and get the second out. She then squeezed a bases-loaded infield fly to secure the outcome.

Jackson (8-2, 1-2) regrouped from a couple of crucial blown calls early on, and escaped an 8-1 hole after sending up 11 batters and scoring six times in the fifth inning.

Smythe coaxed a nine-pitch leadoff walk, and the Indians made Robbins work extra hard by repeatedly spoiling tough pitches and connecting with easier ones.

Miranda Cantrell lined her second RBI single of the game, and Miranda Ladson trimmed the margin to 8-4 with a two-run double down the left-field line.

Swink nearly made a spectacular diving catch in center, but the ball squirted away on impact with the ground for a Johnson RBI hit. An ensuing fly ball was dropped in left field to make it 8-7.

Kylie Darrow hustled all the way to third base when her grounded triple could not be cut off in right, and slid safely with the tying run on a wild pitch in the top of the sixth.

Cantrell, Johnson, Darrow and Owens each had two hits for Jackson. Robbins allowed six earned runs on eight hits while striking out three and walking three against the visitors.

Tucker began the bottom of the first with a single, and Robbins handed herself an early 2-0 advantage by launching her fourth home run to straight-away center.

The Knights added three runs in the third after four consecutive batters got aboard with two outs. Jayce Jarvis made it 5-1 with an RBI single after Swink drove in two with a blooper to right-center.

Bowling singled after Makenna LaChance was hit by a pitch to start the Farmington fourth, and Grimes loaded the bases after the Jackson defense hesitated to field her bunt single.

McKennah Wallace cashed in with a two-run single to right, and Robbins followed with a sacrifice fly. The Knights did not strike out during the game.

Jackson had a potential threat removed beyond its control in the second. After Johnson singled, Gerau fouled a pitch off her leg and foot, and rightfully stayed still in the batter’s box.

Since neither umpire declared the ball dead, Robbins alertly fielded it in fair territory and turned an odd double play that was upheld following an appeal.

A subsequent batter was hit by a pitch that instead was ruled foul. Jackson also harmed itself at times, losing two other hitters due to interference with the catcher and contact outside the box.

Jackson failed to score after putting runners at the corners with one out in the opening frame. Wallace caught Cantrell stealing second while Darrow remained stationed at third.

Jarvis wisely raced to second base on a throwing error when leading off the Farmington fifth, but was cut down stretching for third by Ladson.

Jackson opened the season on a six-game win streak, and provided a stern test for conference power Notre Dame before dropping a 1-0 decision last week.

Farmington freshman Jayden Tucker is greeted by teammates Shelby Bowling (4) and Jocelyn Grimes while touching the plate on her three-run home run during sixth inning softball action against Jackson on Wednesday in Farmington.

Jackson runner Kylie Darrow (55) scampers back safely on a pickoff throw just before Farmington third baseman Avery Graham applies the tag during the first inning on Wednesday in Farmington.

Farmington freshman Jocelyn Grimes slides past Jackson catcher Ainsley Watson on a two-run single by McKennah Wallace in the fourth inning on Wednesday.

Farmington junior Abby Robbins watches her two-run homer during the first inning against Jackson on Wednesday.