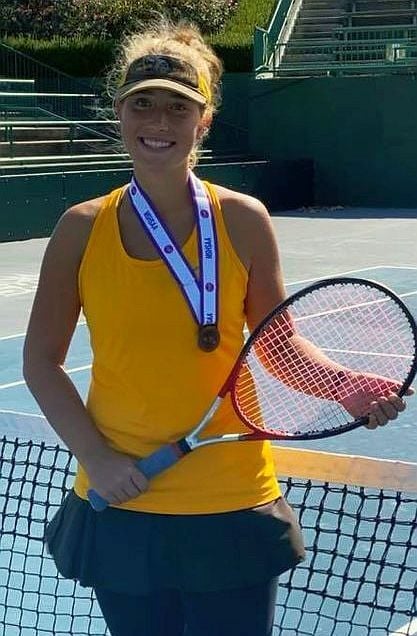 Arcadia Valley senior Hannah Helvey stands with her medal and racket after placing fourth in Class 1 singles at the MSHSAA girls tennis championships on Saturday at Cooper Tennis Complex in Springfield, Mo. Helvey finished with a 22-3 singles record this season. 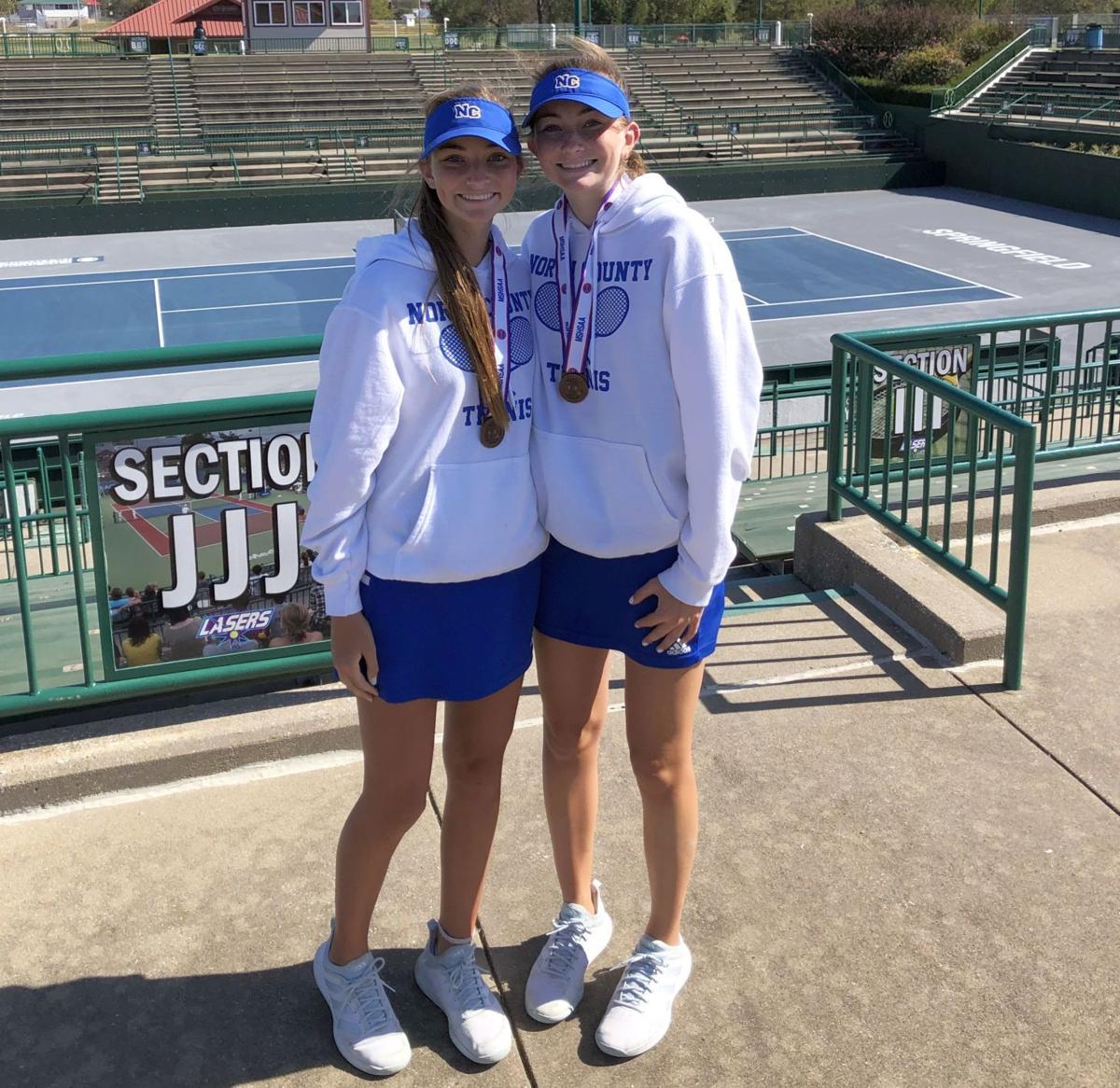 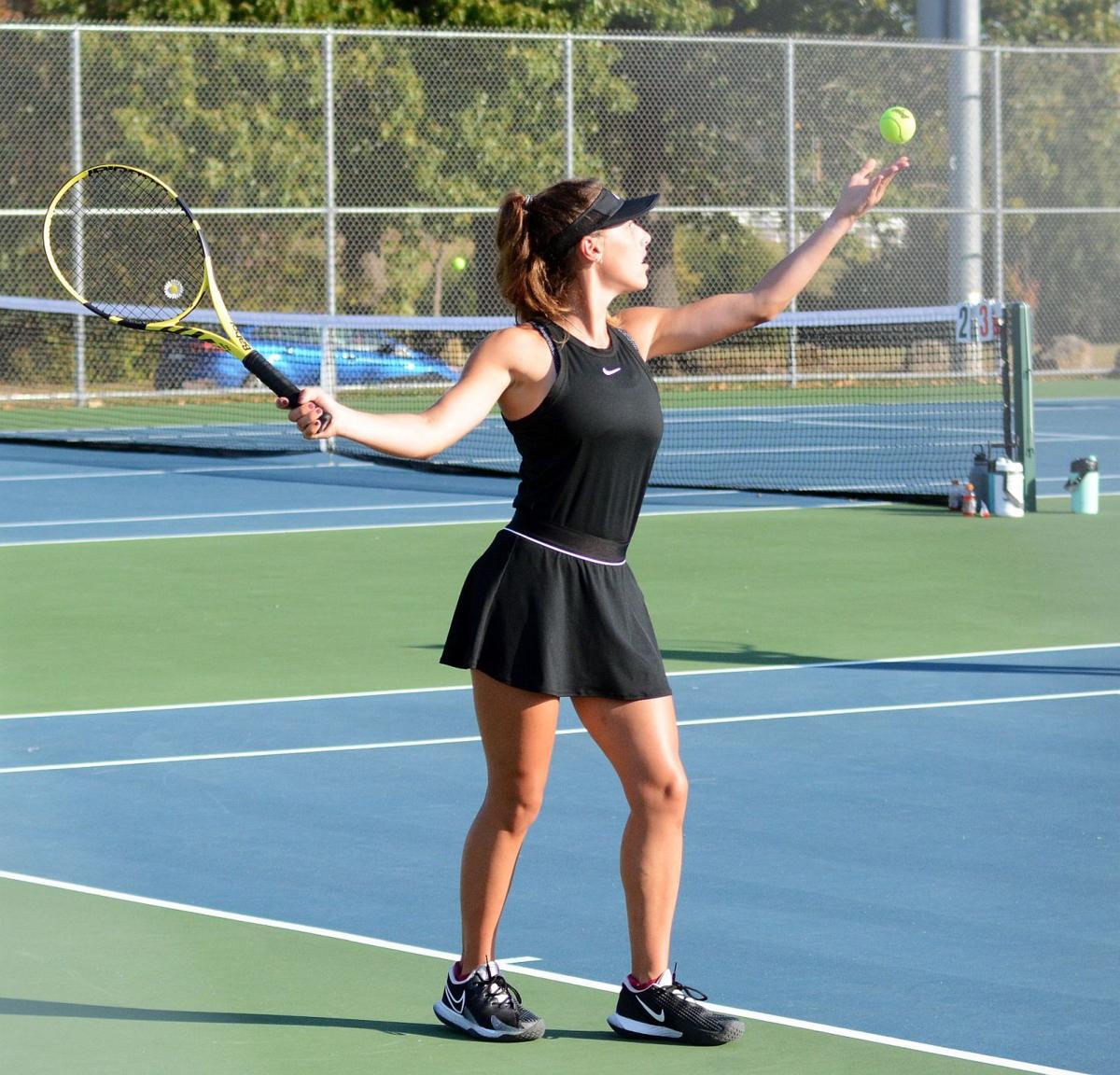 Farmington junior Kate Busenbark serves during a doubles match in the MAAA girls tennis tournament on Wednesday, Sept. 30, 2020 in Farmington.

SPRINGFIELD, Mo. – Hannah Helvey made a decision before the start of her junior year to pick up a tennis racket and join a struggling program at Arcadia Valley.

About 14 months after playing her first varsity match, the senior punctuated a resoundingly successful journey with a state medal draped around her neck.

The reigning MAAA and District 2 champion finished her second season with a 22-3 singles record. Her 22nd consecutive victory came Friday, ensuing a spot among the final four.

Those performances stamped a banner year for girls tennis in the MAAA, where such prominent results have been a rarity over the past two decades.

The league was also represented in Class 2 singles by Farmington junior Kate Busenbark, who likewise qualified for the first time this fall.

Helvey claimed the first set during her third-place contest, but Eden Fisher of Nevada earned a service break to pull even and narrowly prevailed 3-6, 7-5, 11-9 after extending a decisive race to 10 points.

Elizabeth Barlow was an overwhelming state champion from Villa Duchesne, and the lone player that Helvey could not challenge in four matches.

After shutting out Helvey 6-0, 6-0 in the semifinal round, Barlow clinched the title with another 6-0, 6-0 blitzing of Lutheran South star Emma Pawlitz.

Helvey rolled 6-3, 6-1 over Hope Kassel of Lutheran South in the first round on Friday. She was in front 6-5 and advanced past the quarters when Lamar opponent Alexia Phipps retired due to injury.

The Politte sisters rebounded from an initial 6-2, 6-2 setback against Izzy Cancila and Elizabeth Brown of Villa Duchesne on Friday to surge into medal contention.

The top North County duo, which helped the 14-1 Lady Raiders end a six-year district title drought, was just a few points away from possibly reaching the fifth-place match on Saturday.

Politte and Politte played five times during a taxing span of 21 hours, and their last two outings needed super tiebreakers to be settled.

Hailey Colley and Avery Surber of Westminster seized control late for a 2-6, 6-3, 10-6 triumph, then fell 6-2, 6-0 to fifth-place Megan Gullette and Claire Southard of Notre Dame, who were defeated by the Politte sisters in sectional action on Monday.

Lauren and Hanna saved their most competitive battle for last, splitting the first two sets in regulation tiebreakers before edging Libby Weddle and Payton Netten of Bishop LeBlond by the slimmest possible margin at 7-6 (4), 6-7 (2), 10-8.

North County is projected to return four of its top five varsity starters next season. Lauren Politte held the No. 1 singles position as a sophomore, while her older sister played at No. 3.

Busenbark began her singles quest on Thursday, first falling to Jungeun Go of Willard 6-4, 6-3 and later being eliminated by Jessica Snare of Warrensburg 6-2, 6-1.

Busenbark steadily progressed to the No. 2 ranking while helping the Knights capture their first district title since the 2015 season.

BONNE TERRE – Hannah Helvey is taking her tremendous second and final season of high school tennis all the way to the Class 1 state tournament.

FARMINGTON – Seniors Abigail Doty and Karmin Duncan took care of their respective business, then waited near the door of the adjacent tennis c…

Arcadia Valley senior Hannah Helvey stands with her medal and racket after placing fourth in Class 1 singles at the MSHSAA girls tennis championships on Saturday at Cooper Tennis Complex in Springfield, Mo. Helvey finished with a 22-3 singles record this season.

Farmington junior Kate Busenbark serves during a doubles match in the MAAA girls tennis tournament on Wednesday, Sept. 30, 2020 in Farmington.