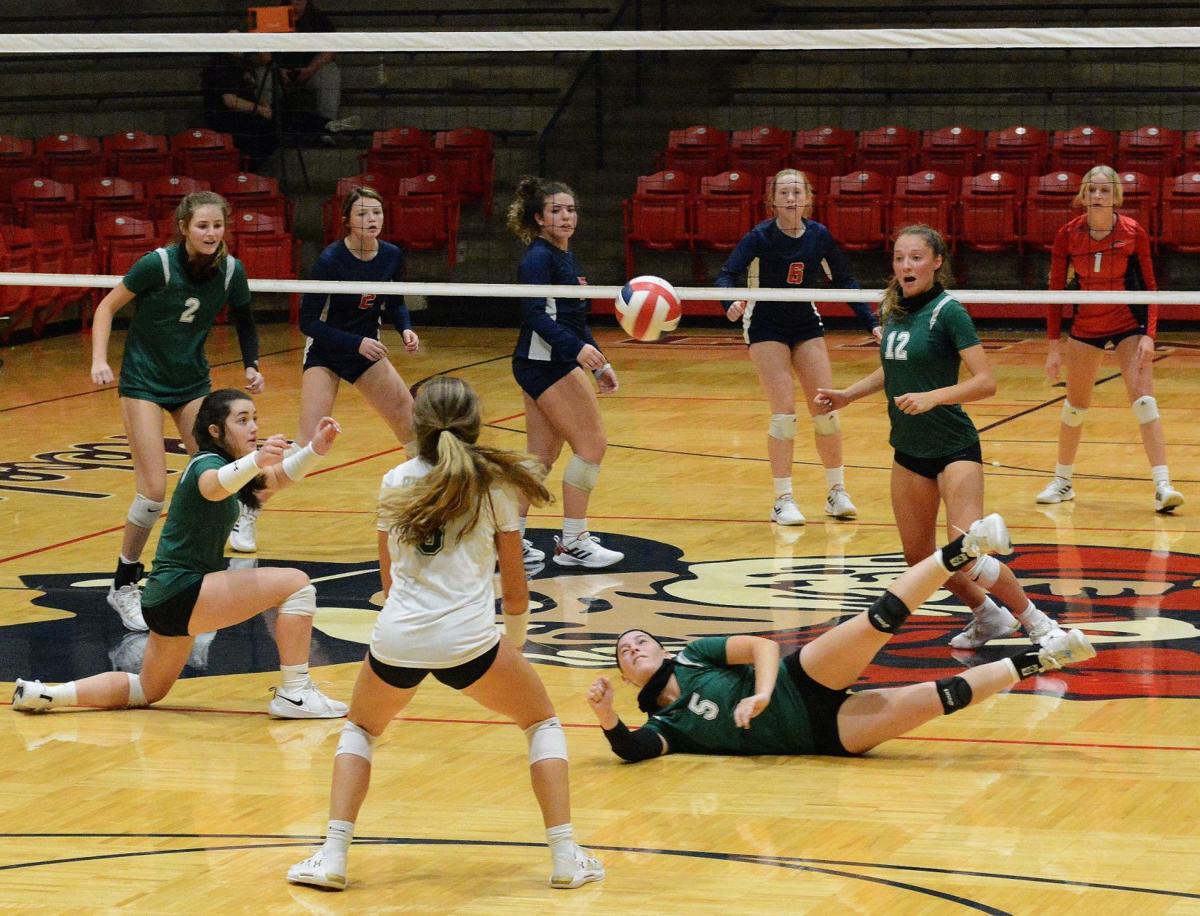 Players on both sides react as Ste. Genevieve senior Brittney Kreitler (5) keeps the rally alive while crashing to the floor during game three of a conference volleyball match against Central on Tuesday night in Park Hills. 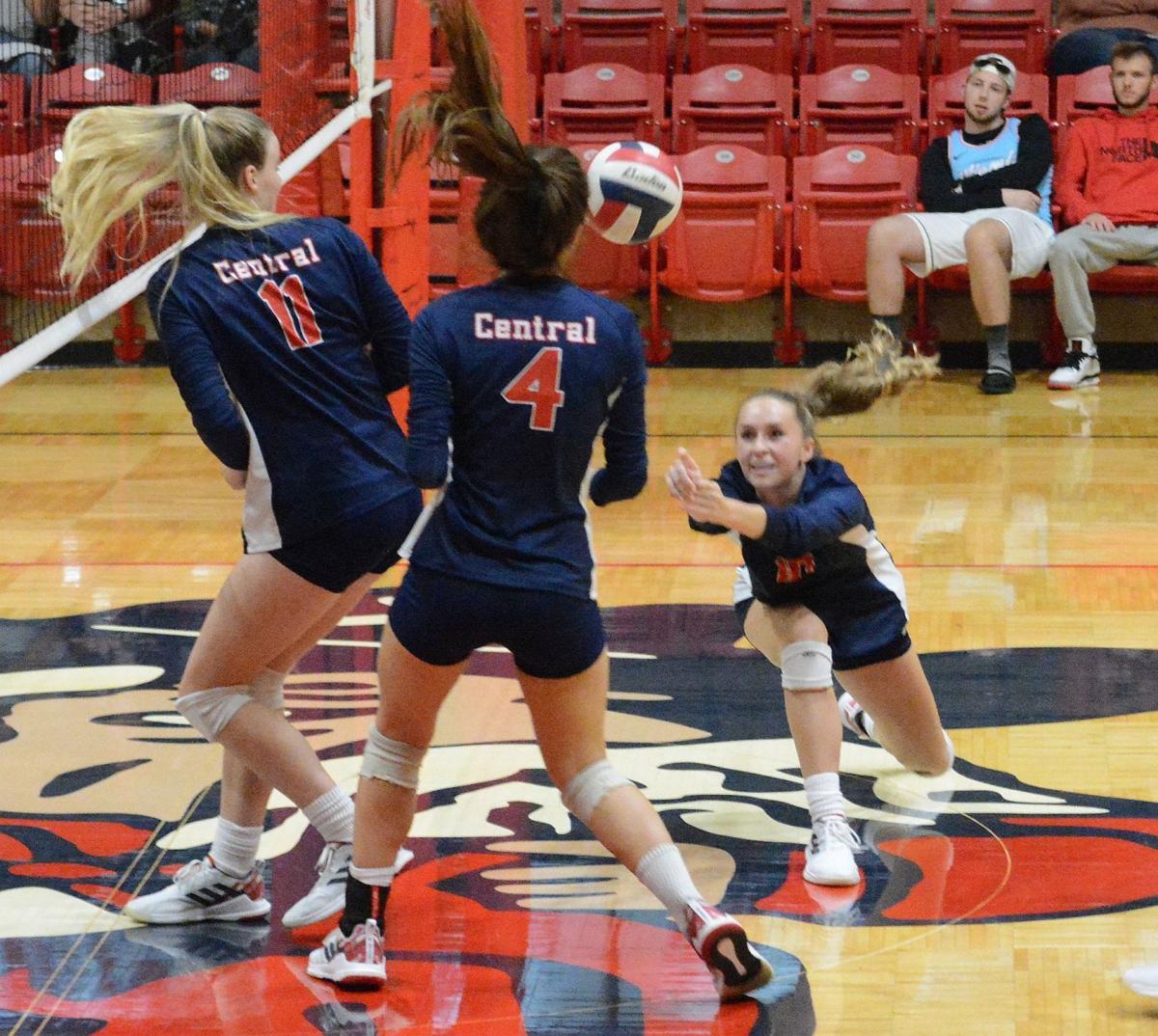 Central junior Reagan Bradley (10) lunges to save a deflected attack from the Ste. Genevieve side during game two action on Tuesday night in Park Hills. 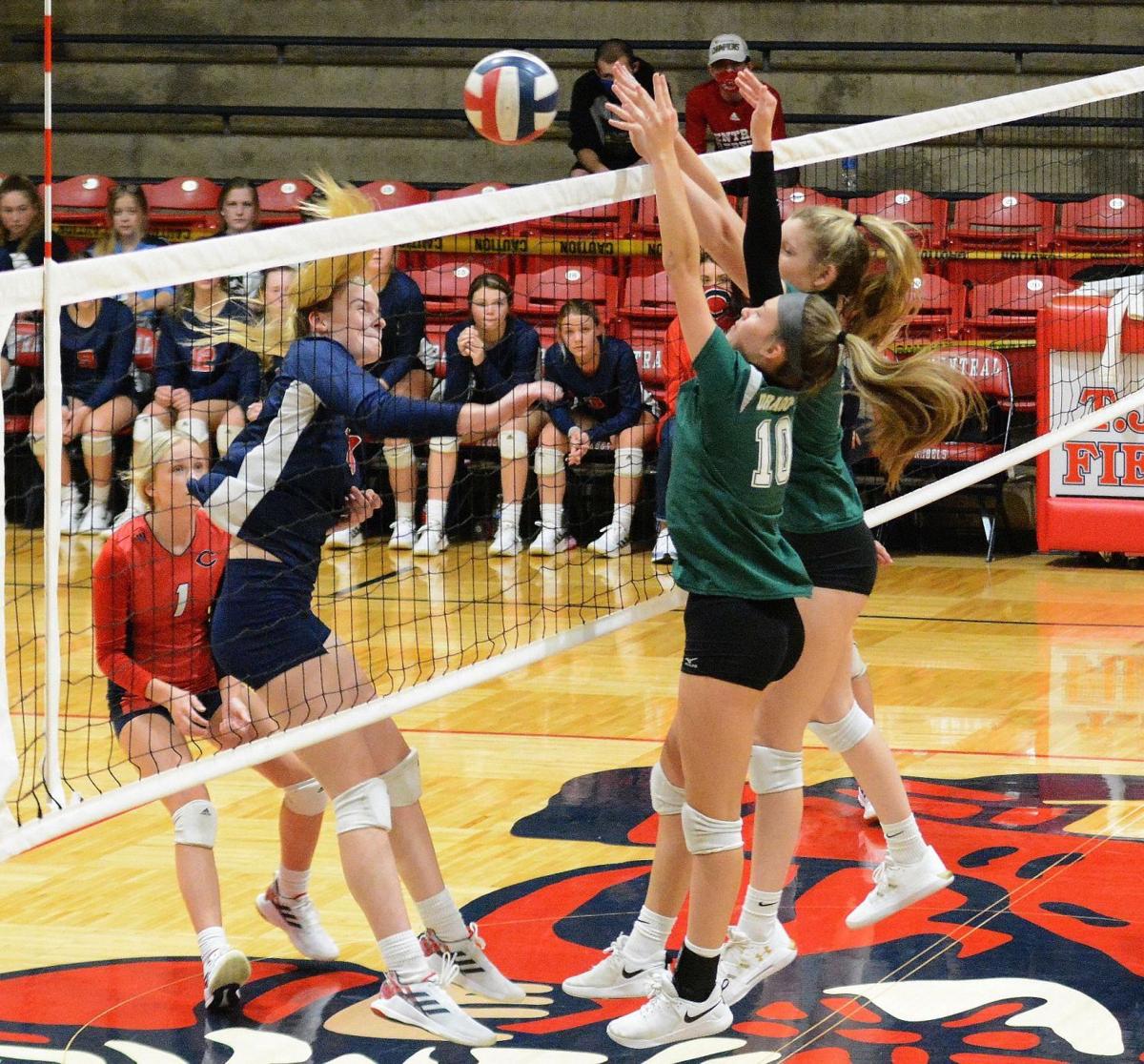 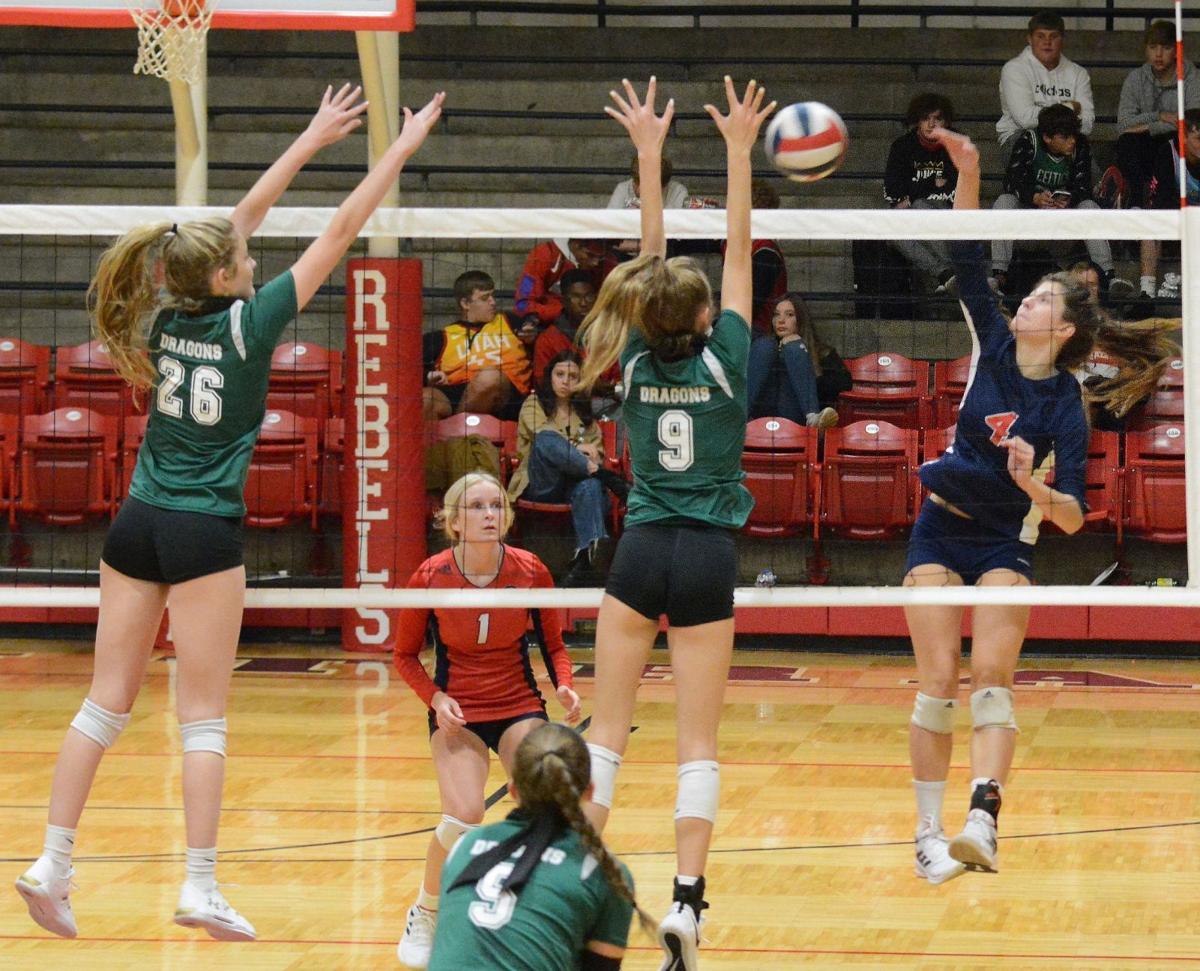 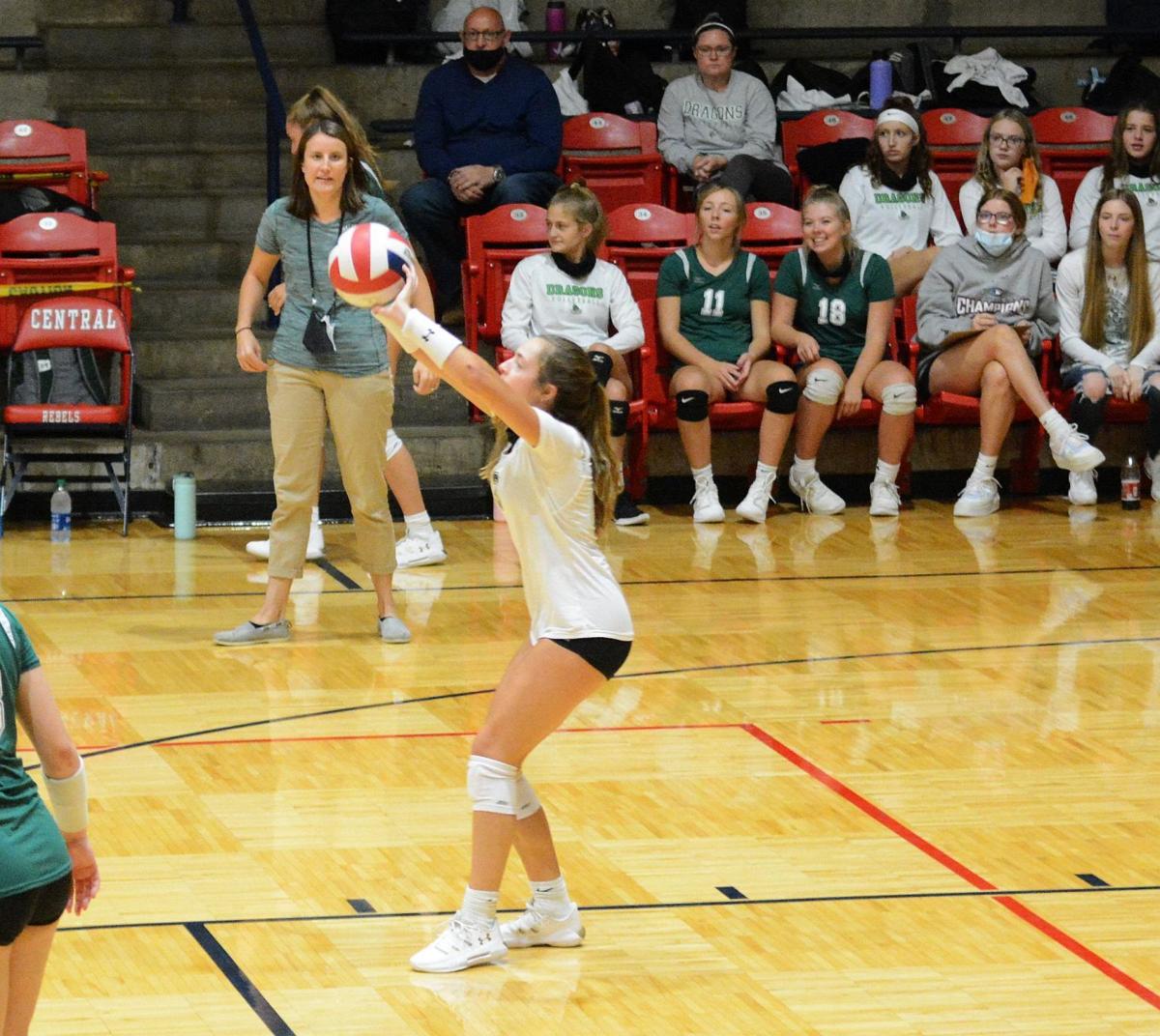 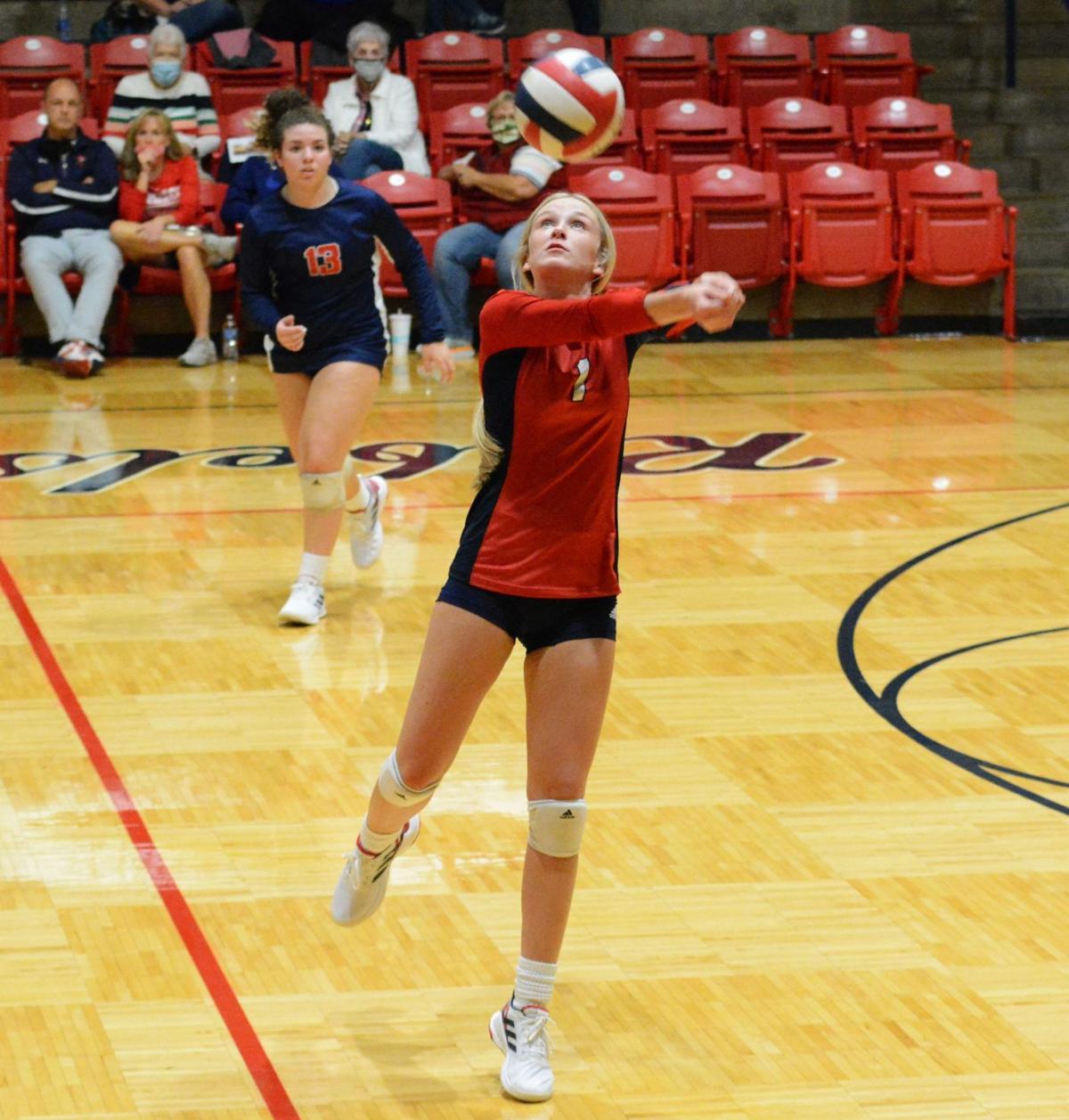 Central senior libero Jessica Hulsey (1) steers a pass away from the sideline as setter Addisyn Casey (13) looks on during game two action against Ste. Genevieve on Tuesday night. 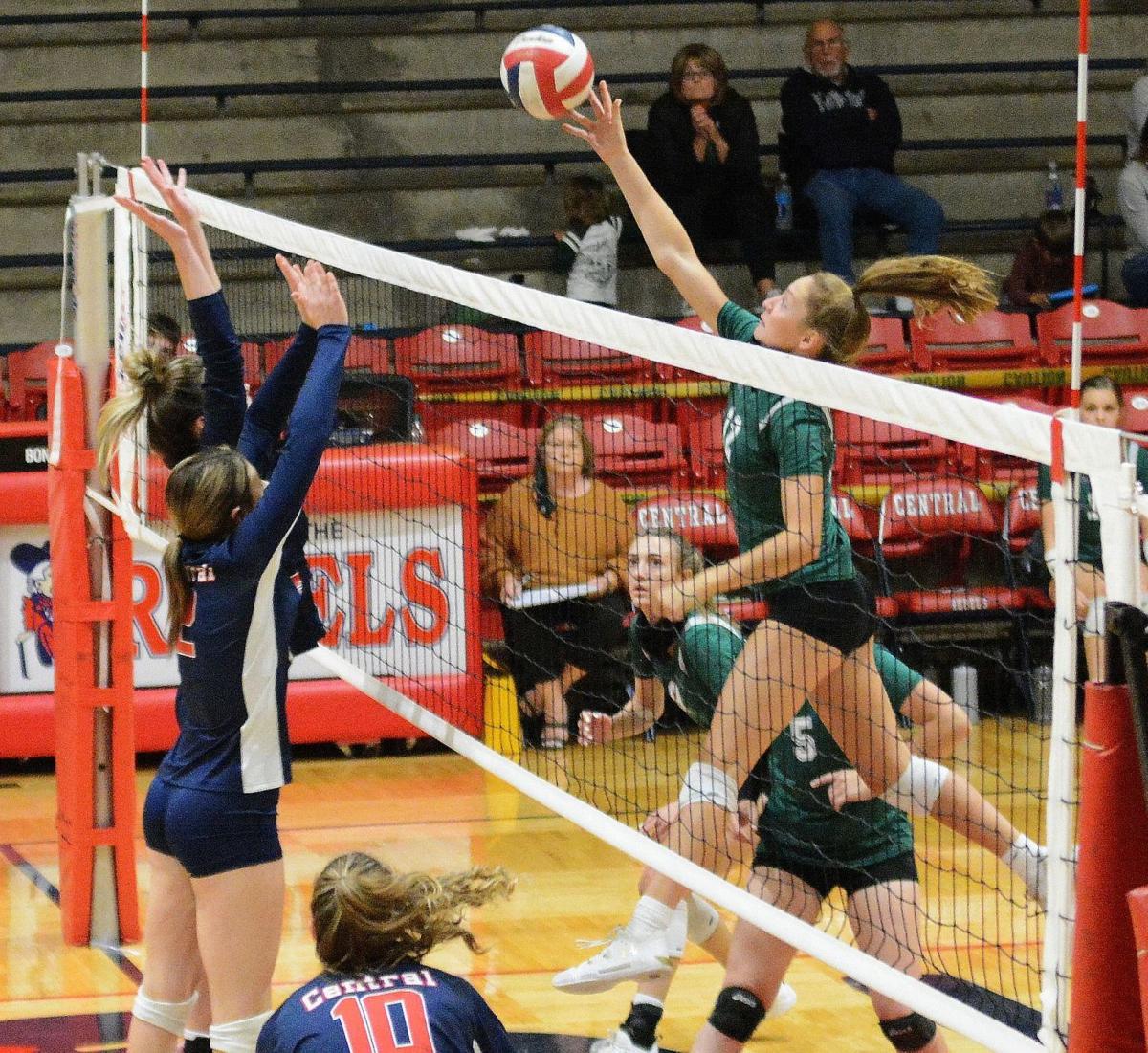 PARK HILLS – Ste. Genevieve hitters brimmed with confidence when punishing the late-arriving defense of Central, and seemed to feed off each saving play amid a feverish defensive effort.

Tuesday marked the beginning of conference action for MAAA volleyball teams, and the Dragons staked their immediate claim to be considered a top Large-School contender.

Ste. Genevieve (8-1, 1-0) has humbly built the best overall winning percentage in the MAAA heading into October. But there was nothing quiet about this victory.

The longtime rivals engaged in a brilliant opening game that included numerous long rallies, as players scrambled in coverage and turned aside plenty of powerful attacks.

But balanced hitting and effective double-blocking at each rotation gave the Dragons an edge. Abby Moore slammed 10 kills while making five blocks, and Marysa Flieg equaled Tessa Grass with nine kills while providing six blocks from the middle.

“Blocking and big swings are what really get our energy and momentum going,” Dragons first-year head coach Carla Basler said. “We had some big saves from our defense, and our setter does a great job of hustling and getting to things that look like they’re down to somehow make something good out of it.”

But the Lady Rebels could not generate enough production along the right side, and yielded a few too many clean swings to Ste. Genevieve without getting touches.

Senior setter Addisyn Casey finished with 22 assists, eight digs and four kills, and was afforded just one day of preparation for the match after a brief quarantine kept her away from practice.

“The right side not clicking had a little more to do with our middles not closing blocks, and we weren’t passing from the 10-foot line where we could actually set and hit,” Central head coach Tracie Casey said. “I felt like tonight, Ste. Genevieve’s passing was right on the money. Their three on defense were putting the ball exactly where it needed to be almost every single time.”

Ste. Genevieve had to replace five regulars from its most recent district championship squad, but kept the intensity high and composure steady after regrouping from a slow start.

Central jumped ahead 10-3 in game one, bookended by two Kimball blocks on the opening point and an ace from Olivia Dunn, who served five straight times.

The Dragons countered with an aggressive 5-0 streak. Moore and Grass shared a stuff-block between their respective kills, and Elizabeth Basler aced an ensuing jump serve.

Koetting rifled a spike down the line for her team’s first lead at 12-11. But Kimball answered instantly, and the tone was set for a competitive game-one duel.

“We sometimes like to start a little bit sluggish, and I don’t know why we insist upon doing that,” Basler said. “I knew that we were capable of playing so much better, so the timeout was just to get them back in the headspace they needed.”

The Lady Rebels claimed the next two points to draw even, but saw the visitors execute perfectly on their second chance to close the stanza at 24-23.

Arie Taylor, who chipped in 10 digs and two aces, guided a smooth pass on serve receive to Kreitler, and Flieg hammered a quick feed to the floor.

Kreitler was accurate on a more difficult back-set to Grass off another pinpoint reception from Maya Watts when the Dragons converted their third match point out of a stoppage.

“At the start of the season, we went back to a lot of basic fundamentals, like how I wanted them to pass the ball or blocking and hitting [techniques],” Basler said. “They just worked tremendously hard, and it helps that they all get along so well together, on and off the court.”

Reynolds, who was not available for the lone Ste. Gen. loss against Windsor, totaled 21 digs. A.J. Prudent had five blocks and four kills, while Elizabeth Basler picked up seven digs.

Game two was highlighted by a marvelous rally at 6-4 that saw nine different players provide at least one dig while Reynolds and opposing libero Jessica Hulsey made two each.

Kreitler and Grass each reacted to save two blocks by Central middle Allie Kelly, and Reynolds got the assist on a long bump pass from the back row to Grass.

Two sharp momentum shifts would follow. Shalea Fischbeck served a 7-0 counter run by Central that saw Coleman knock down three of her six kills on the night.

Ste. Genevieve answered right away with its own 7-0 push after trailing 11-6. The Lady Rebels yielded four of five  points on errors once Taylor delivered an ace.

After trading missiles from middle with Kimball, Flieg surprised Central with a two-handed push into a vacant corner at 18-15. Moore elevated to score off a block that helped secure a two-game lead.

Marler tried her best to keep the home team within striking distance down the stretch, raining down seven kills during game three with her sixth coming at 16-15.

A double block by Flieg and Grass kept the Dragons in front, and no other Central player would earn a kill during the set until Coleman connected at 21-18.

Players on both sides react as Ste. Genevieve senior Brittney Kreitler (5) keeps the rally alive while crashing to the floor during game three of a conference volleyball match against Central on Tuesday night in Park Hills.

Central junior Reagan Bradley (10) lunges to save a deflected attack from the Ste. Genevieve side during game two action on Tuesday night in Park Hills.

Central senior libero Jessica Hulsey (1) steers a pass away from the sideline as setter Addisyn Casey (13) looks on during game two action against Ste. Genevieve on Tuesday night.